You could say that Nelson Molina’s destiny is in trash. I mean that in a good way because if it weren’t for Mr. Molina there would be no ‘Treasures in the Trash Museum’. 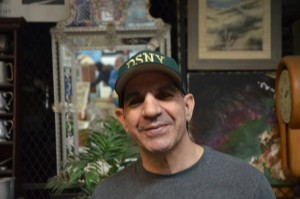 Let me back up and explain. The other day I had an opportunity to visit one of New York City’s unique museums. It is located on the downtown edge of East Harlem in an old warehouse managed by the Department of Sanitation. The building used to be a parking garage for garbage trucks. Now with the building’s deteriorating infrastructure, it’s no longer considered safe for the large tonnage of these huge vehicles. But it is just the right size, any way for now, to accommodate the ‘Treasures in the Trash Museum’. 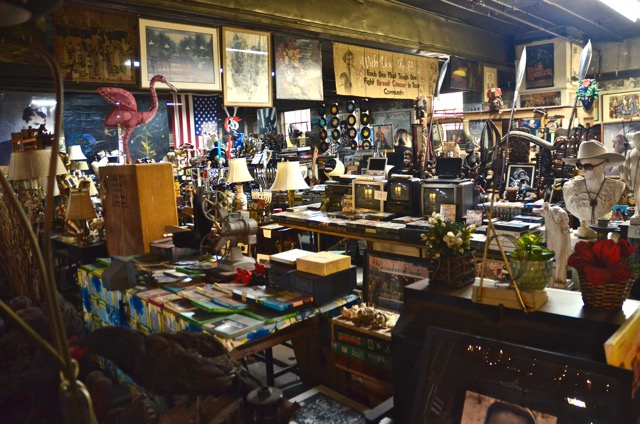 As a young boy, Mr. Molina, the curator and founder of this museum, was drawn to the heaps of discarded items his neighbors piled up on the street for the Sanitation Department to take away. Even back then he had a knack for fixing things, a skill he attributes to his mother’s ingenuity and thriftiness. He put that aptitude to good use by fixing broken and cast-off toys for himself and his siblings. 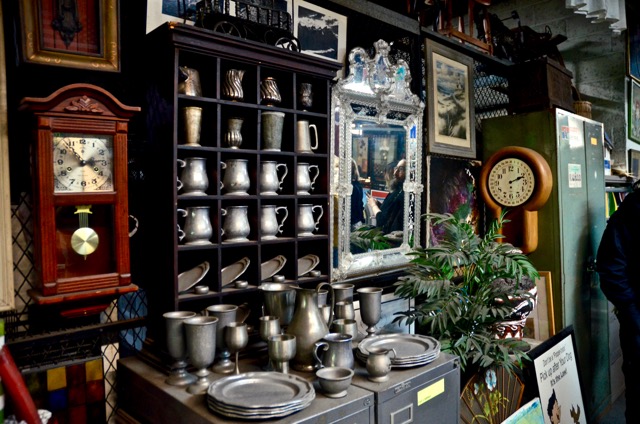 Mr. Molina said that passing the Sanitation Department exam in 1981, when he was a very young man, was a dream come true. Since then his entire work life has been picking up trash and he loves it. But it’s not only his love of broken and discarded items that brought about this museum. Mr. Molina has a special talent, one that is even difficult for him to explain. He has a knack for finding things in the trash. Mr. Molina explained that there is a difference in the clinking together of glass when lifting a trash bag. He said that a wine bottle and a wine glass resonate differently. Some times when lifting a plastic bag he can detect whether something is broken or intact. 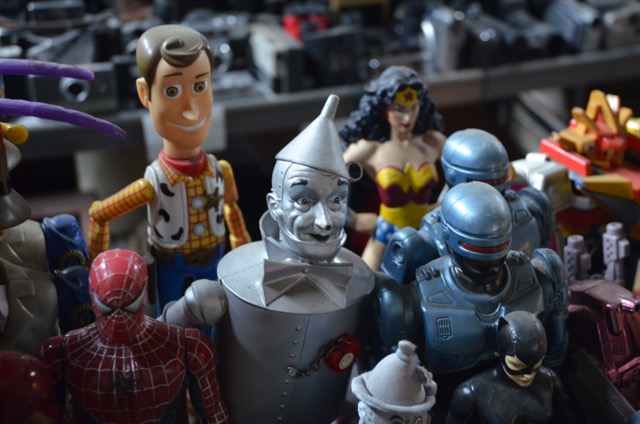 Early on in his career as a sanitation worker, Mr. Molina brought these found items back to his work station and initially put these objects on display in the employees locker-room.  Then when the collection out grew that space, he put the items in a corner of the building where the museum is now housed. Soon the collection of castoffs became a table full of curiosities, then two tables. Now after more than 30 years of gathering items the entire second floor of the old parking garage is chocked full of everything from paintings, to glassware, pewter mugs, jewelry, toys and so much more. It is important to note here that anything that is placed on the street for collection automatically becomes property of the City and it is technically illegal for anyone but the Department of Sanitation to gather up these items. 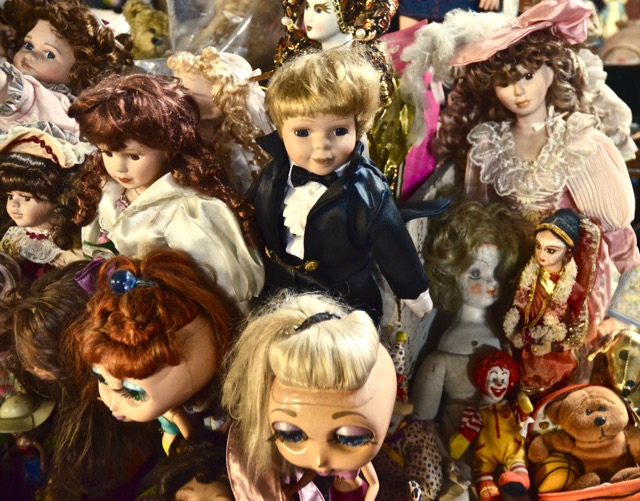 Mr. Molina said, “You’d be surprised what’s in the trash.” And after taking the tour of the museum, that comment is an understatement.

Every item in the museum is catalogued. All objects are regularly cleaned and dusted. As the curator of this unique museum, Mr. Molina has an encyclopedic knowledge of where he discovered each item and when. There is nothing disordered or messy about this place. The tables are thematically organized. Robin Nagle, an NYU Professor of Anthropology and the Anthropologist-in-Residence for the Sanitation Department, along with her students are  helping to catalogue each of these items. Professor Nagle’s main objective is in studying the relationship between trash and cities. She has been in-residence with the sanitation department since 2006 and much of her work is in studying the complexity and nuances of the world around us through garbage.

There are stories in the trash. The passing of time is frequently startling when looking into a bag and portraits, perhaps a hundred years old, sit atop a pile of discarded family albums. Eye glasses so old they are now considered retro, have often tumbled out of a trash bag, the lenses dusty and smeared with  finger prints. Vintage tarnished silver jewelry has sometimes slipped from bundles heaped onto a pile of garbage, the trinkets often landing unexpectedly onto the boot of a sanitation worker. 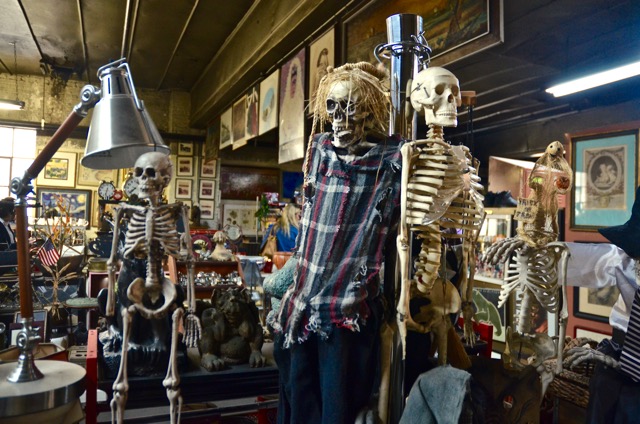 Mr. Molina says that plastic skeletons frequently lay akimbo on a pile of trash bags. Some times they are naked, frighteningly realistic in an early morning light at pick up time. Then again a jumble of bones can clank about in a trash bag and upon inspection, the dear old thing slips out of its container fully dressed in a raggedy attire. 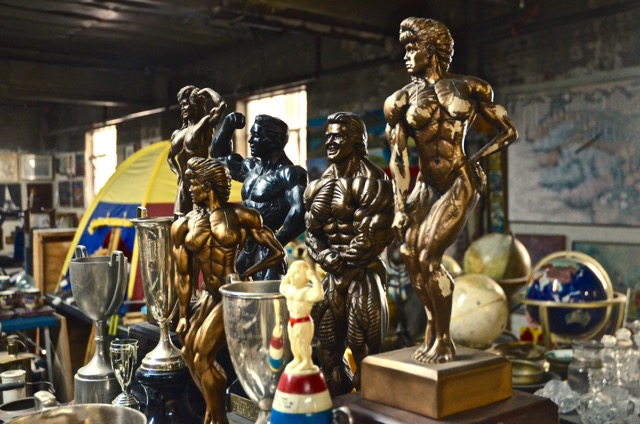 Mr. Molina said it isn’t unusual to have collections of items sitting on the street, a display of time gone by waiting for the trash collection. 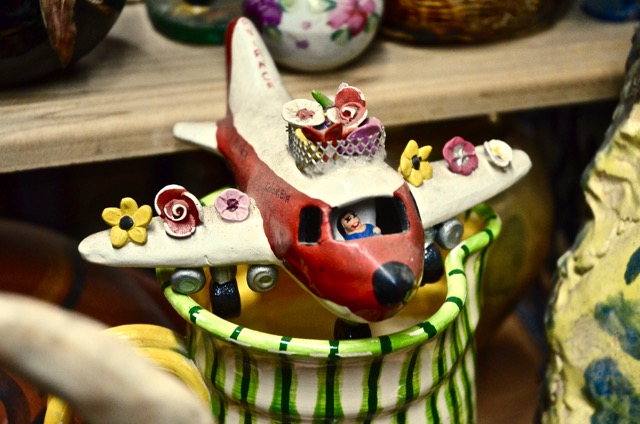 Then there are the curiously delicate, totally whimsical oddities tucked away in a trash bag. He often wonders what story a particular discarded item might tell? When and why was this object important in the life of the person who now discards it? Did a widower remarry? And now do the items that once belonged to the deceased wife, must they all be gotten rid of? 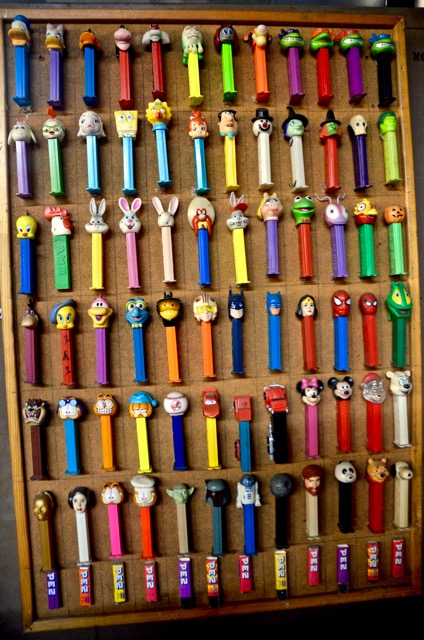 And what does this collection of Pez dispensers represent? One can only speculate why someone would collect these and then after all the effort in designing this display, discard them. Did this belong to a child who now has grown up and left home? Or was this the brain child of a husband who now has found something else to busy himself with? 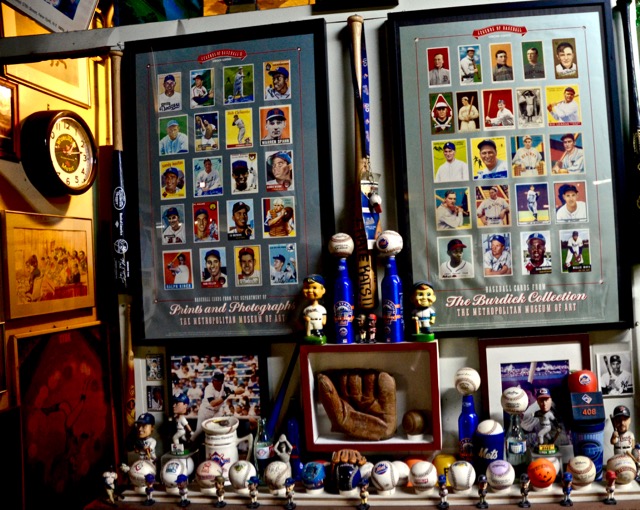 Take me out to the ball game has an interesting twist when looking at this huge display of old and discarded baseball memorabilia.

There are over 45,000 items in Treasures in the Trash Museum. Almost everything has come from Mr. Molina’s pick-up route that extended from 96th Street to 106th Street between First and Fifth Avenue. 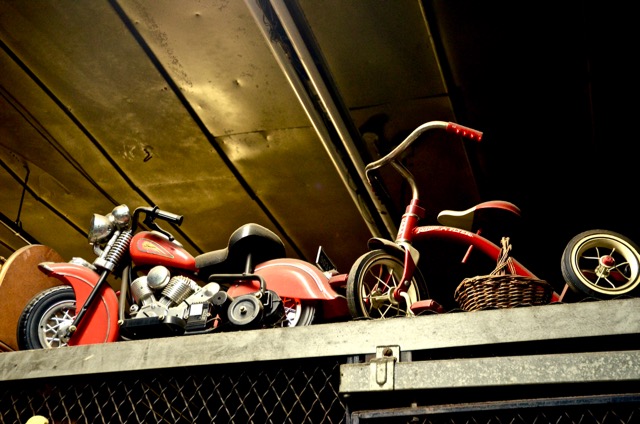 There are displays of cast-off childhood items, symbols of fun times with sons and daughters that now just take up space. The boxes of Band-aids that were used to doctor the skinned knee or the boo-boos on an elbow have probably long ago been thrown out, but when does a parent let go of the trike? 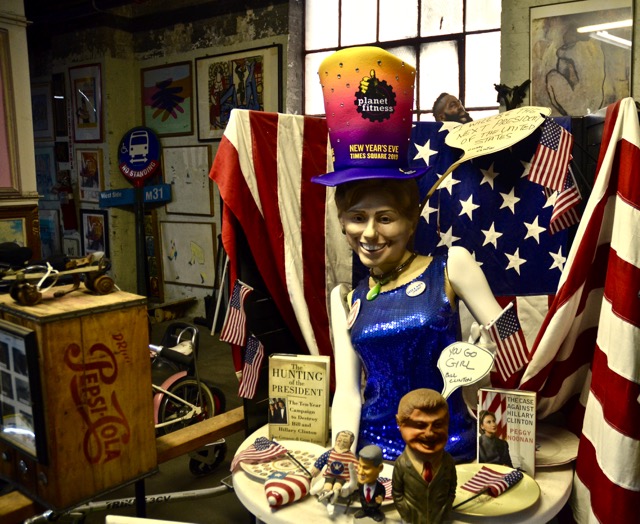 And let us not overlook the no longer wanted items of political struggles. Is this rubber mask of Hillery balanced atop a half manikin surrounded by discarded flags a political statement? What more will the sanitation workers find in the trash as election years come and go.

Mr. Molina retired from the Department of Sanitation in 2015 though he still comes in regularly to manage the museum. Some of his fellow workers bring him interesting items from time to time. However, it is Mr. Molina’s job as curator of the museum to sort through the discards of detritus to insure that this collection is more than just a place where trash is heaped attractively.

Old habits die hard and Mr. Molina has taken the same drive from home to work for over 30 years. Some days, even in his retirement, he cannot resist taking a slow drive through his old sanitation route, just for the off chance that there might be something of interest hanging out on one of his familiar pick-up spots.

14 comments for “TREASURES IN THE TRASH MUSEUM”