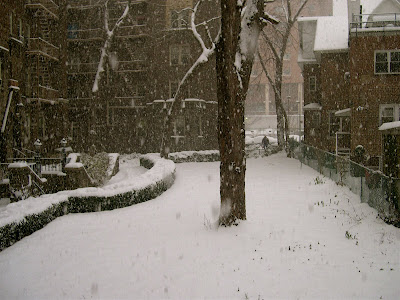 Most people think of houses when they think of something haunted. They think of dark creaky old wooden stairways, or closed, locked rooms that groan and whisper in desolate homes overgrown with weeds and twisted vines. These are the places people usually think of when they talk about a haunted house. I used to think that too, but not any more.

I live in an apartment building and I know my apartment is haunted. A shiver can still run down my spine when I remember the first time I realized this.

Our building, constructed in 1926 is a sturdy four-story walk up. From our dining room windows we look out onto a charming courtyard with trees that were planted when the structure was first built. Today the trees nearly reach the top of the roof, the branches spreading out like a canopy, and the roots stretching far beneath the foundation of the apartment house, or so we imagine. When our windows are open in the warm weather we can hear the leaves rustle and chatter in the gentle breezes. No mater what the season, birds and squirrels can be seen moving about in the trees. Who would suspect in this tranquil setting there would be something haunting us?

There is a pattern to the haunting. Everything is quiet for a while. The weeks go along, the months, and there is a rhythmic hum in our ordinary lives. Then it happens. Light bulbs begin to burn out all at the same time; faucets begin to leak, appliances break down, and the milk sours quickly in the refrigerator. That’s how I know the haunting has come. That’s when I see something — a momentary blankness, an emptiness in the air, and I think I see a shadowy image flit down the hallway like quickly moving smoke. But, then, when I look, whatever I’ve see is gone. All that remains is a lingering, disquieting smell. A smell that sits on the back of my tongue, an odor that I smell as I exhale. And I taste in the air the molding, dusty leaves rotting under the trees. I sense eyes, too, eyes that seem to look out from behind the layers of paint on the walls, following me, silently waiting, watching.

At night when everyone has gone to bed I sometimes hear footsteps coming down the hallway. The footsteps approach the door to my bedroom, then stop. Just as suddenly it’s gone and I know now that it retreats back into the walls. I used to excuse this sound as the wood expanding and contracting. But it’s footsteps, one after the other, deliberate, purposeful steps, walking down the hallway.

Other people have thought they’ve see something, or heard something in their apartments, too. They discount any strange sound or movements as being caused by their neighbors on the other side of the walls. I, too, was skeptical once of the existence of the thing that haunts, but something happened, and I no longer deny what I see or hear.

One day after my son left home and moved into an apartment of his own, I was moving furniture, turning his newly empty bedroom into a study for myself. I had taken my son’s bed apart, then moved his comic book collection and schoolbooks into the closet. I took his rock music posters down from the wall and put up my own choice of art, a plaster head of Nefertiti and a large photo of Billy Holiday. I was hard at work when all of a sudden I thought I saw something, a movement, perhaps a dust fairy floating past my vision. At first I ignored whatever it was, and told myself that nothing was there. However, the image persisted at the corner of my eye. Something stood in the doorway of my son’s room. Overpowered by curiosity I slowly turned. And there in the doorway stood the strangest little fellow.

“Where the heck did you come from,” I murmured. Then I closed my eyes. I could not believe what I saw. When I looked again, he was still there. I waited for him to say something or to move. He did neither. He simply stood silently watching me. I looked away again, wondering was he only a piece of lint on my eyeball. I looked back. He was still standing in the doorway.

This thing, this strange little man stood no taller than a yardstick. His dark eyes, deeply set under bushy brows, glistened like candle flames. His face and hands were the texture and color of tree bark and he wore garments of coarse fabric. Gnarled misshapen toes poked out from under the ragged edges of his pants legs. Thick, dark, bristly globs of hair stuck out all about his head and his knobby hands hung at his side.

I remember thinking, “So, this is what you look like. I knew you’d show up some day.” And I wondered if he had been living in my son’s messy room all these years.

As we stood watching each other I felt as if we had spoken before, or maybe we had touched each other somewhere, in the walls, in the clothes closet, under the trees. After a moment I realized that all those night of worry and hearing something coming down the hallway, coming toward me, scaring me, were not so frightening after all. Then as unexpectedly as this strange little man had appeared he was gone again, like a fading echo.

An icy chill crept down my back while I waited for him to return. The skin on my hands was sweaty when I locked my fingers together seeking my own comfort. I sat in a chair by the window and watched the doorway for what seemed hours, but he never came back.

I don’t know what it was that happened that day, but I do know that something definitely stood in that doorway looking at me. Some days I’ve wondered if it had been a dream. I really did see something that day, though, and I’ve asked myself many times, if this little guy was a part of the building or was he a part of me. I don’t know which.

I do believe there is something magical about the building I live in. I think I hear it breathing on some days. I feel it contracting and expanding as I imagine the structure trying to heal itself, make itself whole again when it learns of the pain and sadness in the lives of the people who live inside the rooms. I like to think that the laughter of children playing, rains down on the courtyard and comforts the tired old building as the giggles are sucked into the cracks of the brick and mortar walls. And this strange little being, this thing that moves through wood and plaster, a soul with eyes that flickered and lapped at me, has anyone else seen him?

I know that the light bulbs will continue to burn out all at the same time and that there will be other strange situations that no one will be able to explain. And I also know that every once in a while this little fellow will flit down the hallway making another vaporous appearance to a purpose I cannot understand.
THE END