I wrote this following piece five years ago. I tried to get it published in a quilt magazine, but it was rejected. I never posted it on my blog, who knows why. Well, here it is years later. Devon is now in school and is quite a special person to us. Enjoy the holidays with friends and family. 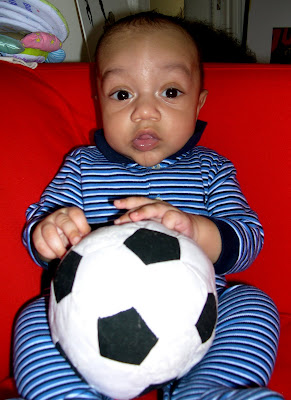 This would be my first Christmas as a grandmother and I’d decided to make a small soccer ball for Devon, my grandson. The ball looked simple enough to copy — alternating black and white hexagons sewn together as for a Grandmother’s Flower Garden quilt, but three dimensional. I’ve made my share of Grandmother’s Flower Garden blocks, so I figured that I’d get this little project done in an afternoon.

I had a small soccer ball Christmas tree ornament and decided to use it as a model. I dug into my fabric stash, pulled some black and white yardage from the bottom of the pile, and made a hexagon template. I cut out the pieces and was off and running. Well, sort of.

Using the Y seam method I began to piece the ball together. I first attached six white hexagons to the six sides of a black hexagon. This first row went together quite nicely. The next row had alternating black and white sections. I seamed them together without much difficulty, as well. However, when I’d attached this row together I knew that something was not right. My ball was as flat as a doily. What had I done wrong?

I am not a math person. I thought I had counted six sides on the white section of the ball but perhaps I had made a mistake. I studied the model again. Looking more closely and counting the sides on the black sections of the soccer ball, I realized that I had indeed counted wrong. The soccer ball wasn’t made up of hexagons, but instead had been made of pentagons – five sided pieces. Back to the drawing board I went and after much fiddling I had a template with five angles that were all the same.
I went back to the cutting board where I sliced up a new stack of five sided black and white pieces and began to sew them together. By the time I got to the third row, I realized that I had again done something very wrong. My soccer ball looked like a black-and-white chicken beak. This was not going well. What had looked to be simple enough at the beginning was turning into a quite complex task.

But I was on a mission and I decided that this soccer ball would not get the best of me. The ornament I was using as a model dangled from the lamp on my sewing table. I counted once again the sides of the black section. Five. Then I counted the sides of the white section of the ball. Six. I counted again. Five black. Six white. How could that be?

Back to the drawing board I went once again, this time measuring more carefully. Like I said, I am really not a math person and it took me many tracings of the ornament, fitting together various sizes of paper pieces and only after I’d created a small mountain of discarded malformed paper soccer balls did I finally figured out how to make a five sided template that would work with the six sided template. I still don’t understand what I did, but three days later when I cut out the fabric pieces and seamed them together, I had a soccer ball. I swiftly stuffed the round cloth structure with leftover quilt batting, hand stitched the opening closed, and in the end had a ball as brilliant as any you’d see in a store.

On Christmas morning I handed my son-in-law, Desmond the gift to open for the baby. He squeezed the package, gave me a quick smile and said, “A ball?”

He proceeded to remove the wrapping. “A soccer ball,” he said gleefully and began to toss the ball up in the air. And after he’d thrown the ball back and forth across the room with my husband a couple of times, he squeezed the ball and commented, “Good action, Grandma.”

Not knowing anything about the game of soccer, I took that as a compliment, but before I could respond Desmond gently bounced the cloth ball off his infant son’s head. Devon continued to contentedly suck on his bottle and kick his little feet oblivious to his first encounter with a soccer ball. “We’re going to have fun with this,” Desmond said.

The project had taken me longer than an afternoon to make, but the lessons I learned were fascinating and as fulfilling as if I’d made a king-sized bed quilt. Maybe next Christmas I’ll make a football. Maybe I’d better get started on that now.

← A HAUNTING
A LONE MUTE SWAN →

8 comments for “SOCCER BALL FOR DEVON”