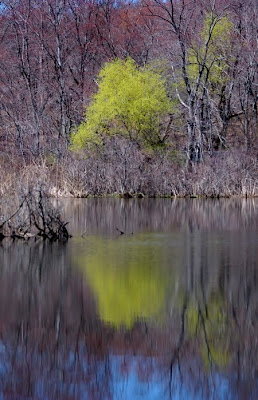 Van Cortlandt Park is an amazing 1,146 acres that stretches out across the northern edge of the Bronx. I head for this area every chance I get. Sometimes I walk along one of the trails or I sit on a bench at the lakeside and watch the ducks and geese glide across the water’s surface. 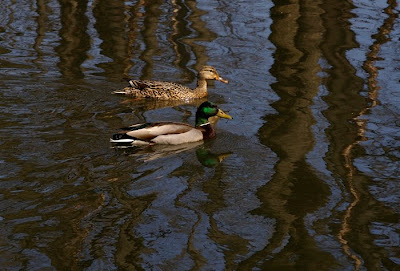 Every year the birds in the area produce a burst of clutches and it’s always a delight to see fuzzy ducklings and perky baby mallards trailing behind their parents. I’ve also become accustomed to seeing a pair of Mute Swans joining this waterfowl grouping. The swans do their bit for the area, too, and every summer I’ve seen a family of swans traveling across the lake and marshland. 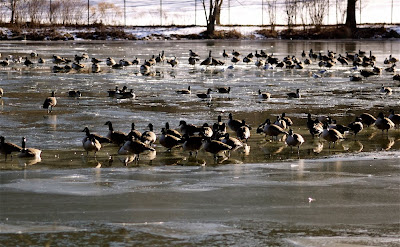 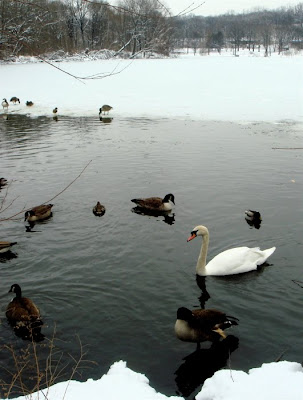 But this winter though the area was filled with more geese than I could possibly ever count, there was only one Mute Swan. I went back to the park several times this winter, and each time I saw only one swan.

It’s spring now and on my last trip to the park I saw Willows, the first trees to begin the bold greening this early in the season and I saw several Skunk Cabbage plants stretching out of the mud and unfurling their large juicy leaves reaching up into the bright warm sunshine. Tidy mallard pairs moved in unison across the lake. And still, I saw only one swan. 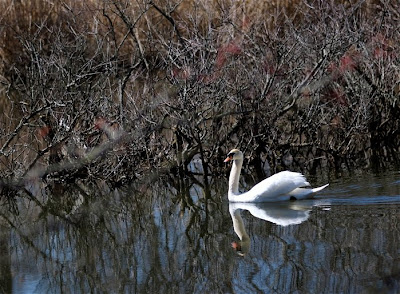 According to the magazine “Wildlife Conservation” Mute Swans ‘have a triangular naked black area in front of the eyes and a black knob above the deep orange bill. The fleshy knob is more prominent on the males’. So, looking at the photo that I took of this bird, I believe that the lone swan is a male.

The sad thing about this is that a pair of these regal birds has been nesting in Van Cortlandt Park since 1983 producing a clutch of at least three cygnets each year. I doubt very much if it has been the same two swans all these years that has been populating the parklands, but the last mating pair may have been distant relatives of the original pair. Science, through modern genetic techniques, is discovering that ‘divorces’ are somewhat common among swans, particularly after a nesting failure, however, these birds tend to be monogamous.

I don’t know what happened to the other swan, whether it was a divorce or a death that parted this couple, but it will be interesting to see what happens next and if the park rangers will introduce another swan? As I watched this lone swan glide across the lake there was great dignity in his pose and I see no sign of regret or sadness and I cannot help but wonder if those are feelings only we humans experience. The Mute Swan still up-ends himself the way he has always done to get at the tubers, stems and other aquatic and submerged plants. He still sits in the middle of the marshland grooming himself in the warm spring sunshine. It is I who will miss seeing the Mute Swan family. I will miss the cygnets and watching the protective parents and I wish that I had taken a photograph of one of the swan families several years ago when I had a chance.

I wonder if this Mute Swan is lonely and then I remember that a very sad an lonely woman once told me she had survived a personal tragedy because the days just kept coming, one after the other, no matter what happened.