The Atlantic Ocean is only an hour and a half subway ride from where I live. The weather during the last couple of weeks in NYC had been miserably hot and humid. A friend invited my husband and I out to Rockaway Beach where she lives year round, an area that is one of the many shorelines of the Atlantic. It was a welcomed visit to the beach and it’s always fun to see a friend and spend long days together chitchatting and just doing not much of anything. But I couldn’t say that the weather was any cooler out there than it was in the middle of Manhattan. Though it was great to get away from the city where the pavement of the streets seemed so hot lately that it felt like it could melt the souls of my sandals. 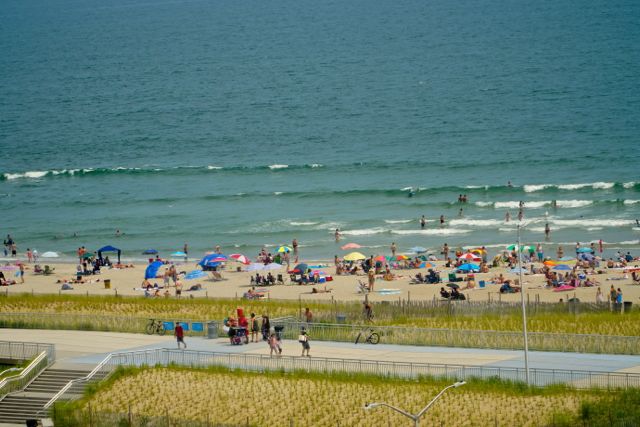 The Rockaway Peninsula is a major playground with a beach that stretches for miles. Parking is a serious issue for the day trippers, but somehow the beaches fill quickly with sun bathers and swimmers. In October 2012 this area was devastated by Hurricane Sandy. The boardwalk was ripped up and blown every-which-way, the sandy beach was eroded and strewn with garbage and building debris. Many homes were completely demolished and washed out into the bay. For the larger residences that were left standing they were flooded up to the second floors, while the small bungalows that are so typical of this area, were completely submerged. It took a great deal of work, money, support and diligence, but this area is now again a vibrant and much used retreat from the busy neighborhoods of the five boroughs that make up NYC. 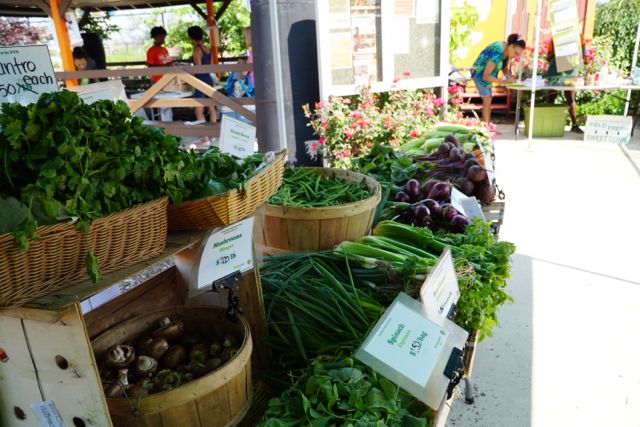 But before we were to hit the beach and do some serious sunbathing, we needed to do a quick shop. Much to my delight we were headed to the ‘Youth Green Market’ located a little farther east on the Rockaway Peninsula. The farm stand and garden is managed and run by the Rockaway Youth Task Force (RYTF), a local community youth program. 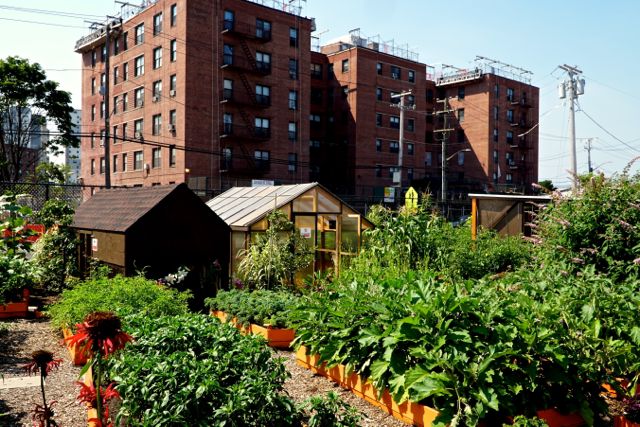 The garden is situated on a main street that runs the full length of the Rockaway Peninsula and the garden is easily reached by a local City bus.  When we arrived a few people were stuffing their shopping carts with the just picked produce and we were all treated to samples of freshly made pancakes, prepared by the youth who work in the garden. This lovely urban farm is located on land that belongs to the NYC Parks Department. The Parks Department is able to lease city-owned land to organizations or individuals that have the expressed intent to crate a community garden. 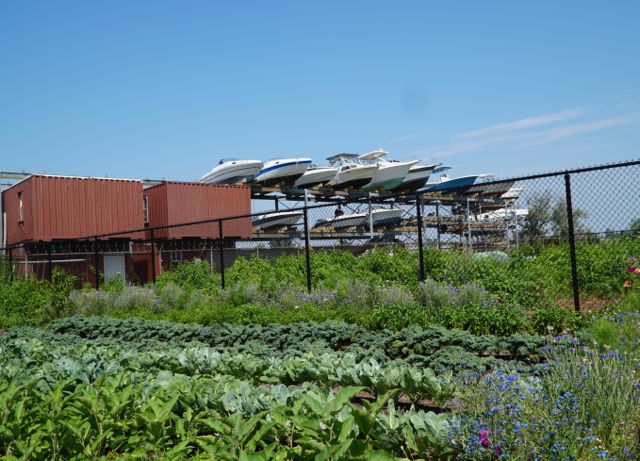 The beans, kale, lettuces, carrots and other vegetables and fruits all grow inside a fenced in area that sits next to a boat storage, a reminder that the Atlantic Ocean is within a five minute walk of this garden. 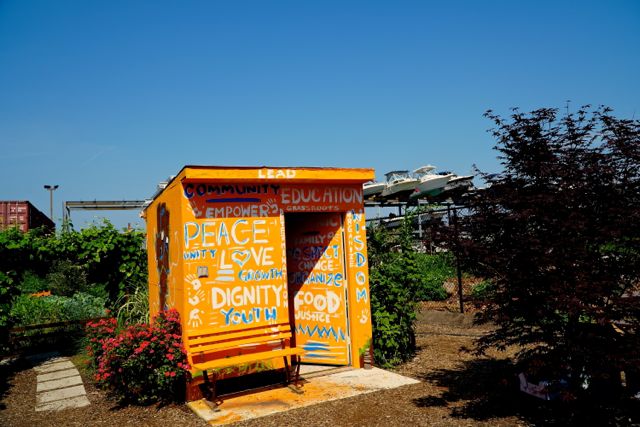 The land is well taken care of, managed and organized by a group of people who care about where they live. The Parks Department has an investment in making sure that these community gardens are successful and they provide resources, supplies and support to these spaces free of charge. But it is really up to the people committed and involved in these gardens to develop them, and as this tool-shed broadcasts, they aim to provide quality and dignity and education to the community as well as fresh and organic produce. 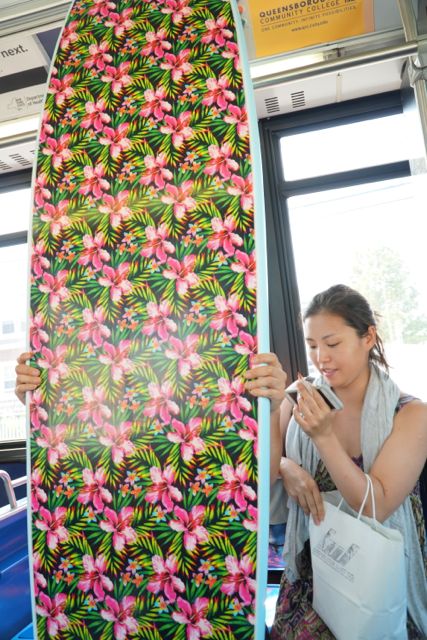 Never underestimate the entertainment of either a subway or bus ride in the NYC area. On our ride back to my friends apartment we were accompanied by surfing enthusiasts who were bringing along a most beautiful surfboard. This surfing couple was suited up and ready to hit the water once they reached their desired location along the shoreline.

We dropped off the veggies we’d purchased from the Youth Market and then headed for the beach. We took very little with us, a chair, a towel. We didn’t need more because we were going to have our lunch at a local joint on the boardwalk. However, we passed folks who we suspected were planning to stay the day and probably far into the evening hours as we watched them unload large bins of toys, beach gear, food and drink that they would then pull across the hot sand in this collapsible wagon. 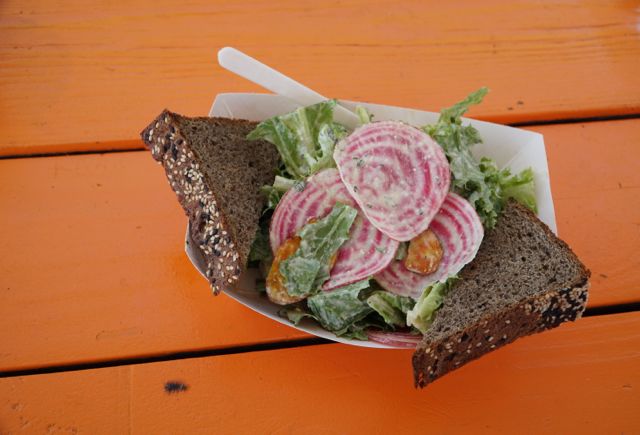 It was a brutally hot day. We sat in the sun for a short while then headed to Caracas, a nearby food eatery, for our lunch. I ordered a delicious salad with a creamy dressing, thinly sliced heirloom beets, crunchy lettuce and the most yummy brown bread that had an ever so slight taste of sour dough and a hint of maple flavoring. 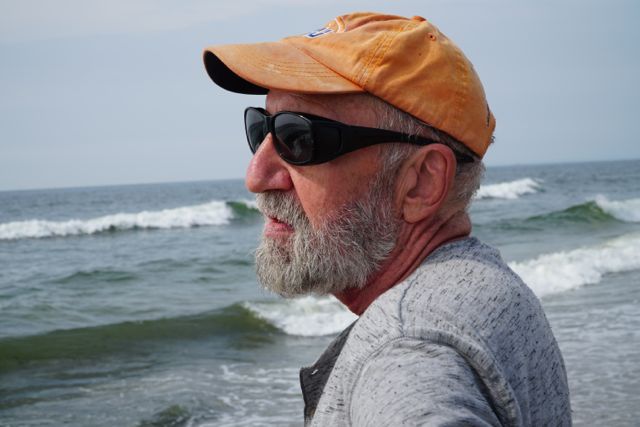 After lunch we walked along the beach for a short while longer before going back to my friends apartment to rest up for the evening’s activity. The waves, the cool breeze blowing in from the Atlantic always has an life affirming effect on me. 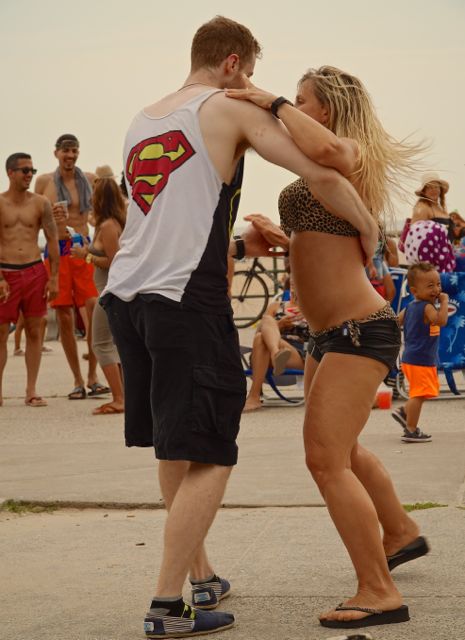 That evening we were going to attend an Off-Off Broadway production located at the other end of the beach. We stopped off for dinner at one of the joints on the boardwalk and were entertained not just by live Latin music while we ate our fried clam sandwiches and drank our glasses of chilled wine, but we were delighted by the dancers who twirled and gyrated to the tunes. 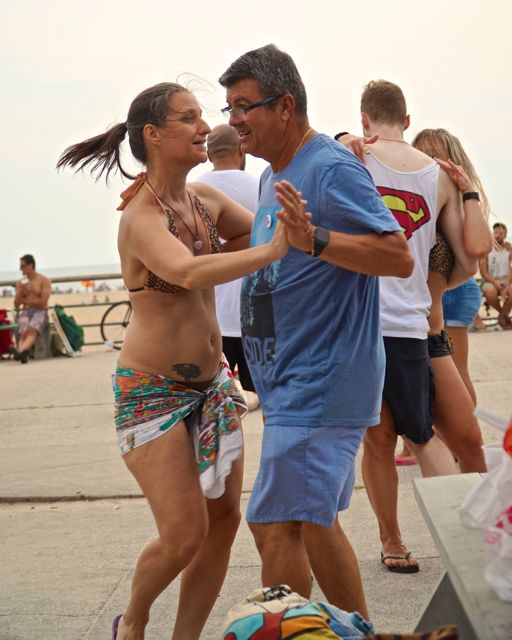 The dancers, some very talented and capable, switched partners frequently throughout the late afternoon. Some people stood at the edge of the dance floor, swaying to the music, smiling and sipping their drinks. 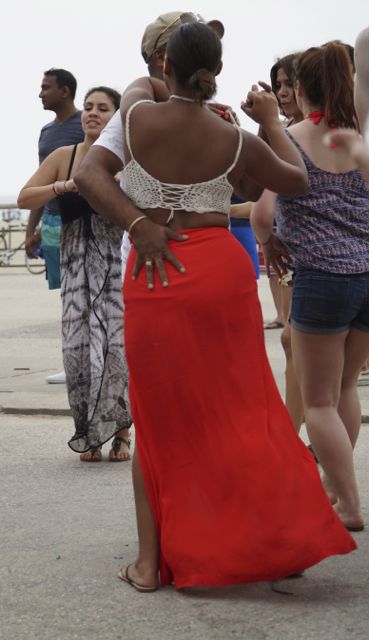 It was easy to see that some of the dancers were very accustomed to each other. They moved smoothly together, smiling, enjoying the coolness of the evening as the sun slowly descended into the hazy glow of sunset. 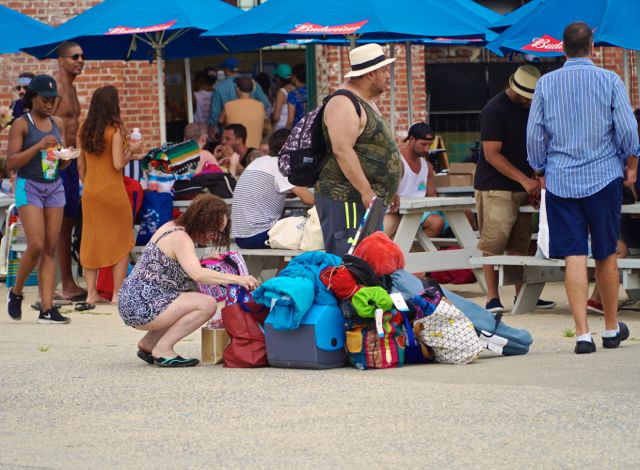 And then there was the packing up. It was time to go home. Here and there piles of possessions littered the boardwalk, refugees traveling, nomads who might return again tomorrow to play in the brilliant summer sun. 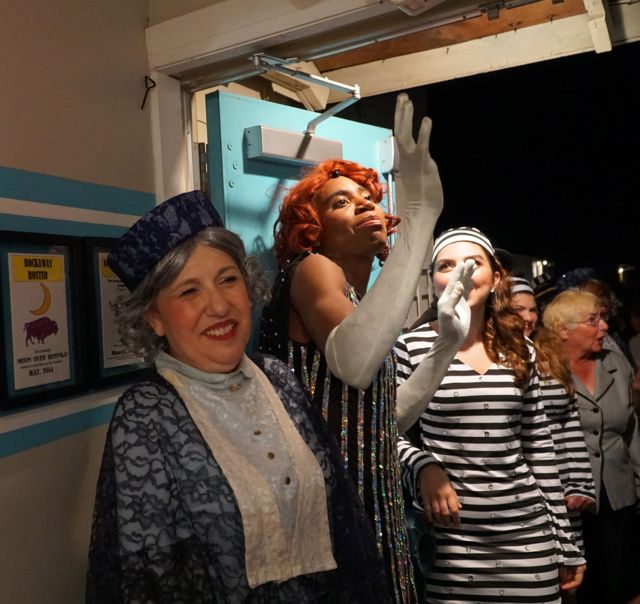 Then we headed over to the Rockaway Theater where we would see an Off-Off Broadway production of The Producers. There were no photographs allowed in the theater and the only photo I could manage of the performers was as we exited the building after the show. What a fun evening. Such a talented group of people. Rockaway has a lot to be proud of. 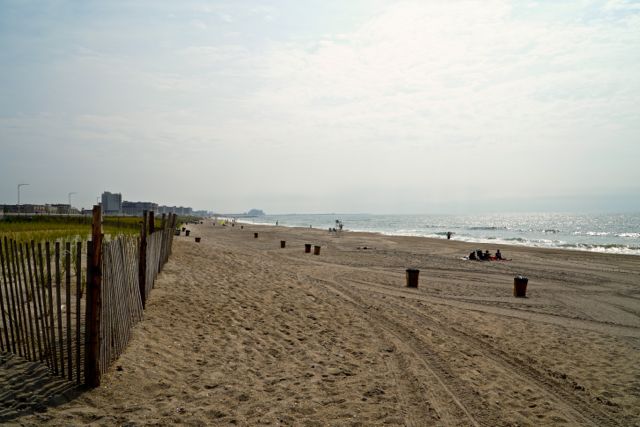 Early the next morning and our last day on the Rockaway Peninsula we took a long walk on the beach. The sun had not fully breached the haziness of the dewy sky. There were a few people eating breakfast while enjoying the privacy of a lonely shoreline. We strolled for a while. We sat for sometime watching the waves, scarcely talking, for fear of breaking the sense of peace that always come with the lapping of waves against a sandy shore. 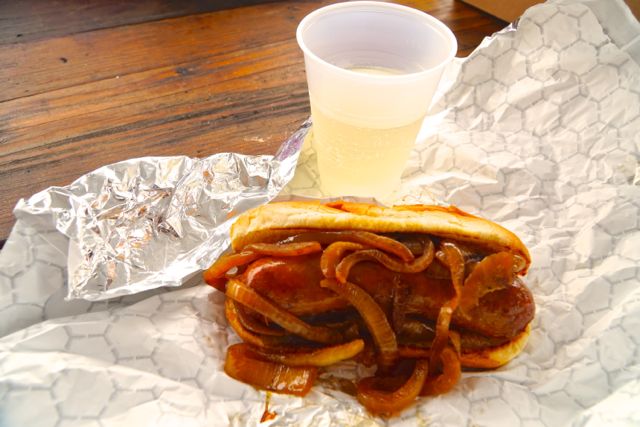 But then it was time for us to pack up our scant belongings and head back into the city. Though we prolonged our stay with one more stop, a beer garden near where we were to pick up the Rockaway Ferry that would take us back into Manhattan. We each ordered a classic Bratwurst with spicy cooked onions and a glass of white wine. It was a perfect ending to a delightfully relaxing and fun weekend.

10 comments for “A WEEKEND IN ROCKAWAY BEACH, NEW YORK”