Sompong Seetha scattered a shovelful of hot coals atop the lid of a giant cooking pot to steam the rice. It was 5: A.M. Sompong a food vendor and the proprietor of a food stall in Bangkok had been up for hours getting everything ready for the day. He learned years ago, when he first set up his food stall, that in this massive, sweaty metropolis, with residents preoccupied and ever curious about their next meal, the food vendor business was highly competitive, if not cutthroat. And Sompong knew that if he wanted to make it in this line of work, he must get an early start every day. 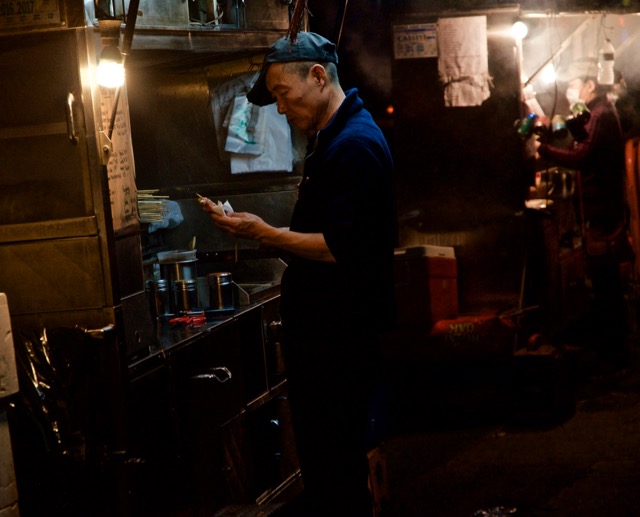 Sompong Seetha, a Vietnamese immigrant, only knew how to cook one dish, chicken and rice in a spicy sauce, a recipe that originated from Hainan, an island off the southern most tip of China. Even though this was the only item offered on his menu, the sauce, perfected over time, had customers lining up throughout the day for his food.

The sun would not come up for another hour. A single light bulb hanging above Sompong’s work area cast an eerie glow across his face. The chicken pieces were cleaned, salted, seasoned and put on the grill to be roasted. Once that was set in motion, he prepared the sauce of grated ginger root, finely diced chili pepper and soy sauce. Soon the sultry morning air took on the aroma of the steaming rice and chicken juices sizzling on the grill.

As Sompong wiped down the counter, his first customer of the day, a regular early morning patron, stepped into the dim light of the food stall. Sompong handed the man a cup of weak tea. “Drink this while you wait. It is almost done.”

From the very first day that Sompong opened his food stall he intended to treat the customers with the same politeness he expected from any businessman. He connected with his clientele, learned how they liked their food; giving the woman who only wanted white meat exactly what she desired, a little more sauce for another steady customer, and more rice and less sauce for another patron. If you were a regular customer of Sompong, then he knew how you liked his food.

When the early morning patron put his empty teacup on the counter, Sompong scooped out a heaping amount of rice from the pot, settling it firmly into a bowl. He then placed a portion of juicy grilled chicken atop the rice and poured the spicy sauce over the food and handed it to his customer.

A few more customers stood near Sompong’s food stall. They talked among themselves. Familiar faces, Sompong knew that of all the thousands of food purveyors crammed into every available nook of urban real estate in Bangkok, that these food seeking customers were faithful to his food, the special rice and chicken dish that only he could provide for them.

But it wasn’t just the food that Sompong provided. It was the man himself, the chef the customers had grown to love and trust, a caring food vendor who took the time to give his steady patrons exactly what they wanted. He had become their food friend.