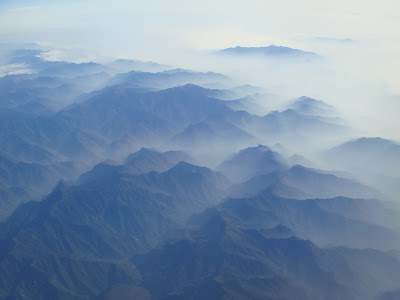 This year we spent Christmas and the New Year in Thailand. It’s a long flight from New York to the Orient. We were in the air 14 hours before we caught our first connecting flight in Hong Kong, not to mention the time we spent waiting on the tarmac at the JFK airport. But things went quite smoothly and we were in the air in no time. There’s not much to see up there in the wild blue yonder though at one point I got a great shot of the landscape of China before we reached Bangkok. The view from up there looked mysterious and magical. I wanted to believe that what I saw was fog spreading out over the mountain range. Knowing what I do about the air quality of that country I suspected though that what looked so dreamy and artistic might have quite likely been pollution. 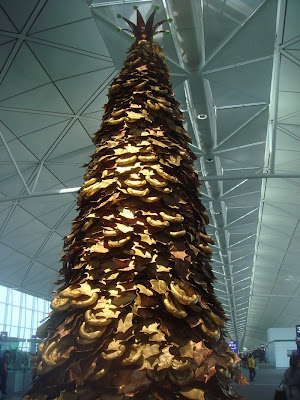 We had no idea how or even if we’d experience any kind of Christmas while we were away. I had not left any Holiday decorations back in our apartment. No need to, and I didn’t think that I’d miss any of the hoopla that we usually dealt with during this time of the year. So, when we got off the airplane in Hong Kong where we were to change planes and head for Bangkok I was quite surprised to hear American Christmas carols coming over the loud speaker as we walked through the airport looking for the gate to our connecting flight.

And then we saw it, a huge floor to ceiling golden Christmas tree. It didn’t sparkle with glitter nor did it have twinkling colored lights. This immense symbol of the Christian Holiday looked as though it had been made of gold though we all knew that it had been spray-painted. The closer we got to the tree the more curious the decorations seemed to be. The tree had been constructed of very large cutout leaves and wire sculptures that I thought looked like bedpans and I grabbed a quick shot as we hurried off to find our departure gate. 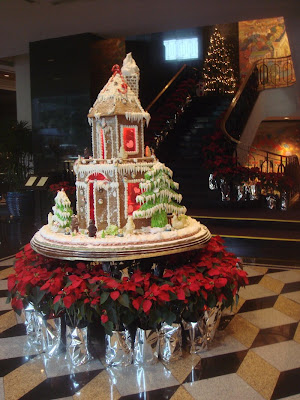 When we arrived in Bangkok we were greeted by more Christmas decorations in the hotel lobby. A huge gingerbread construction stood in the foyer complete with confection that replicated dripping snow with many Santa Clauses positioned around the house in both white and dark chocolate. The humidity even in the air-conditioned lobby played havoc with the frosting and like real snow sliding from the roof of a heated house, the frosting kept breaking off the eaves of the cookie roof and had to be replaced every so many days by one of the bakers from the kitchen.

What really impressed me was the number of beautiful poinsettias that were everywhere. I thought they were native to the topics and while talking with one of the staff in the hotel I learned that they were new to this country and that they called the plants Christmas Flowers. The red blossoms certainly dressed the streets and lobbies with great dignity though I was disappointed to hear that they did not grow in the wild tropical forests.

On Christmas Eve we attended an outdoor Holiday buffet with all the American trimmings: turkey, dressing, cranberry sauce and then there was fried rice, bean curd wrapped in cabbage, Phad Thai Sai Khai, banana and glutinous rice steamed in banana leaves and countless other exotic goodies. Overseeing this affair was a huge snowman sculpted in ice. He stood in front of the appetizer section, tropical flowers scattered about its base, a silk scarf tied around his neck, a classic top hat and the beam of a spotlight to show him off. The poor fellow got smaller and smaller as the night went on. Droplets of water ran from his hat and down the cheeks of his jolly round face. We all knew that it was only a matter of time before he’d be nothing more than a puddle of water on the slate floor.

Christmas decorations were often simple and done in very good taste. The Christmas tree in the lobby of our hotel in Phuket, an island off the main land of Thailand, was a small structure adorned with local seashells, though for me it was dwarfed visually by a lovely tropical floral arrangement.

When we traveled through the cities in Thailand we did not see many signs of the Christmas holiday. There were no houses decked out in colored lights or prancing rain deer standing on the rooftops, but when we returned to our hotels we were always met by the constant playing of Christmas carols. If I closed my eyes and listened to the music at the breakfast buffet, in the elevator, or sitting in the lobby there was no mistaking the time of the year. Probably the most jarring experience with this Christmas music came one morning during breakfast when I heard an old song from my childhood, “I Saw Mommy Kissing Santa Clause” sung by Patsy Cline. I had to chuckle because that morning we were heading off to see the reclining Buddha and thinking about mommy smooching with this bearded old symbol of a Western holiday just didn’t fit my image of what I thought I’d experience during this Holiday season while traveling in the Orient.