The other day I visited the Museum of Arts and Design in Manhattan to see an amazing exhibit titled Crochet Coral Reef: Toxic Seas. There were over a dozen art pieces presented, each one a magnificent display created by crocheting. The exhibition has traveled around the world several times, and this year celebrates its tenth anniversary.

The instillation was the brainchild of twin sisters, Margaret and Christine Wertheim. The sisters grew up in Australia but now live in the USA.

The project initially began in response to their feelings about the declining health of the Great Barrier Reef.

The exhibition consists of creations make from a mix of woolen and nylon yarn, plastic trash bags, beads, and organic and inorganic materials that have been found floating around in the ocean. The art work is a combination of mathematics, marine biology and feminist art practices. The end product is a large-scale ‘Coraline landscape’ with an outcome that shows the coral reef as both beautiful and blighted. 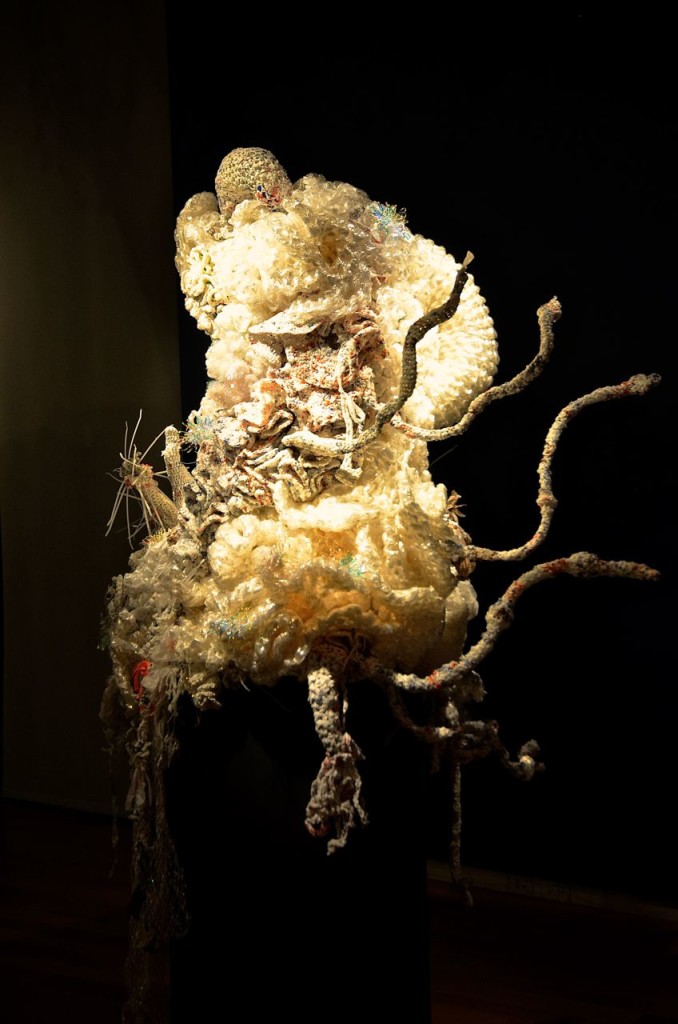 The first art piece that caught my eye was this ghostly exhibit of a crocheted bleached dead reef. When coral dies it becomes pale. This display was constructed by crocheting together ashen colored yarn, plastic grocery bags, garbage bags and other malleable plastics that typically finds its way into the seas. 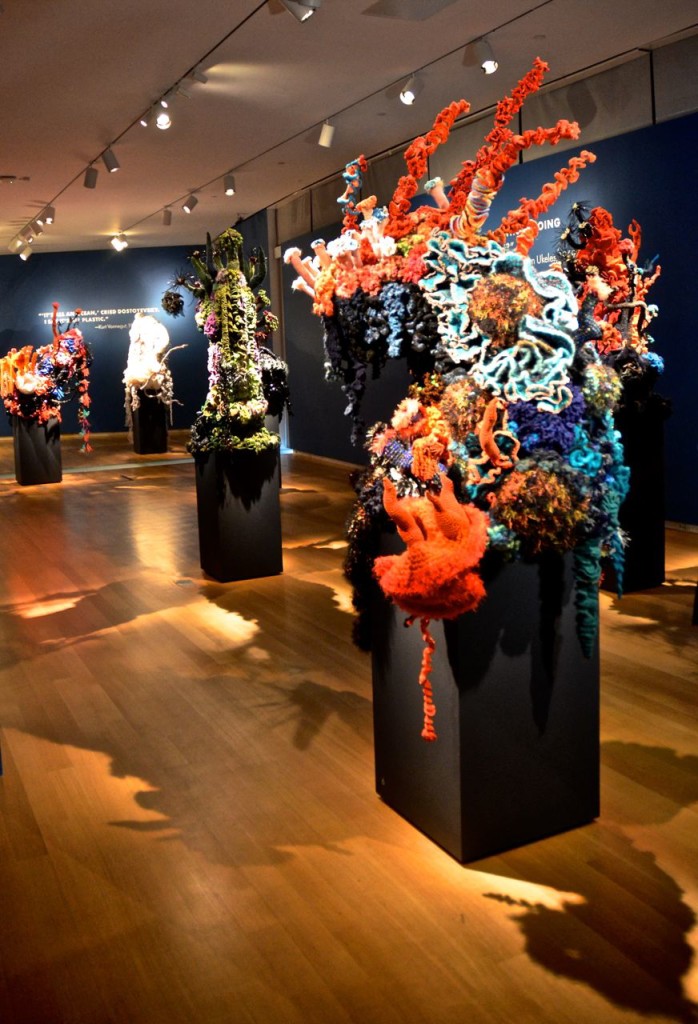 The colors, the lighting, and the array of shapes gives this exhibit a shadowy, otherworldly sensibility.

When the Wertheim sisters first began this project in 2005, they worked alone, crocheting replicas of the coral reef they knew as young girls snorkeling off the coastline of Australia. Then Margaret, the physicist in the family, learned that many of the ruffly and crenelated shapes they were constructing with crochet was akin to a nonlinear mathematical term called hyperbolic function.

I will not even begin to explain or demonstrate this function. Though, what is now termed hyperbolic crochet is a process of adding on stitches in varying stages and at a particular rate, and this is what creates the curvilinear, frilly design. 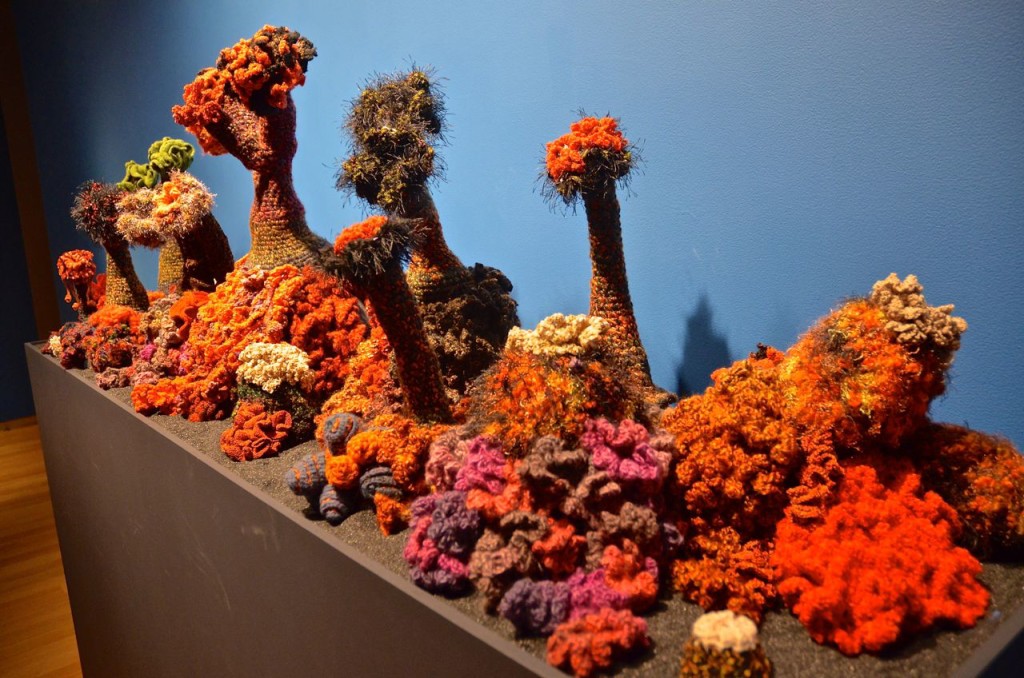 Through its Satellite Reef Program, the Institute For Figuring (IFF) has held workshops and lectures on five continents teaching the techniques of reef-making – plus the related science and mathematics. Since 2005, the IFF has been actively building a global network that currently includes some 8000 citizens in a dozen countries. The IFF welcomes new participants to the project and provides guidelines on how to build coral reefs using the hyperbolic crochet methods. 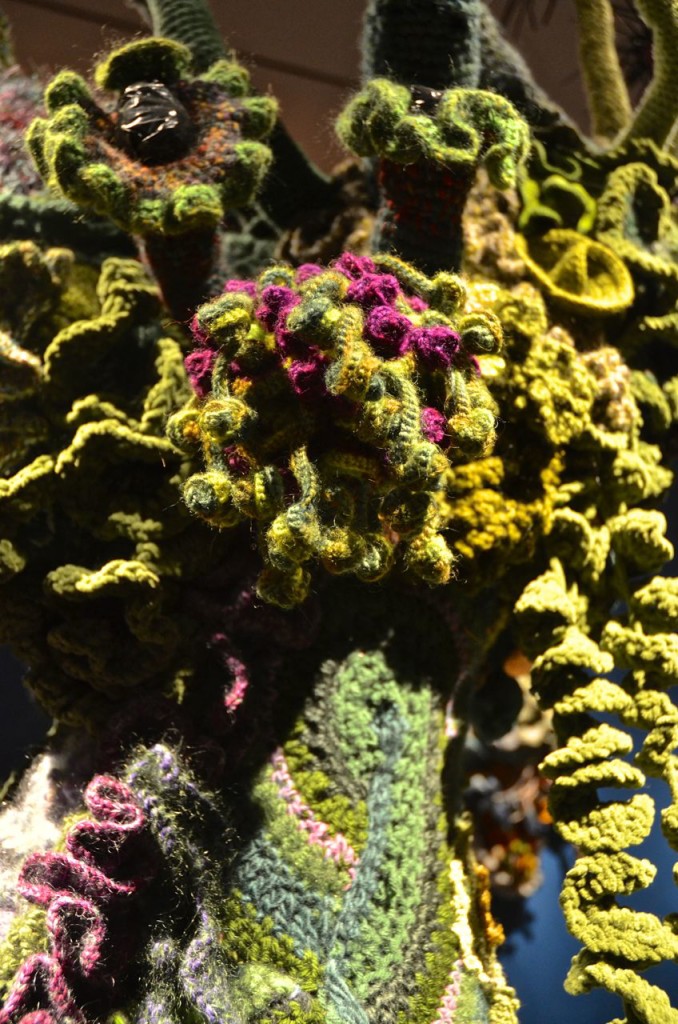 The Crochet Reef Project is a response to the environmental crisis of global warming and the escalating problem of increasing oceanic plastic trash. Crochet Coral Reef installations have been exhibited in art and science museums worldwide, including the Andy Warhol Museum (Pittsburgh), the Hayward Gallery (London), the Science Gallery (Dublin), and the Smithsonian’s National Museum of Natural History (Washington D.C.). The Crochet Coral Reef, now seen by more than three million people,  is considered one of the largest participatory science and art endeavors in the world. 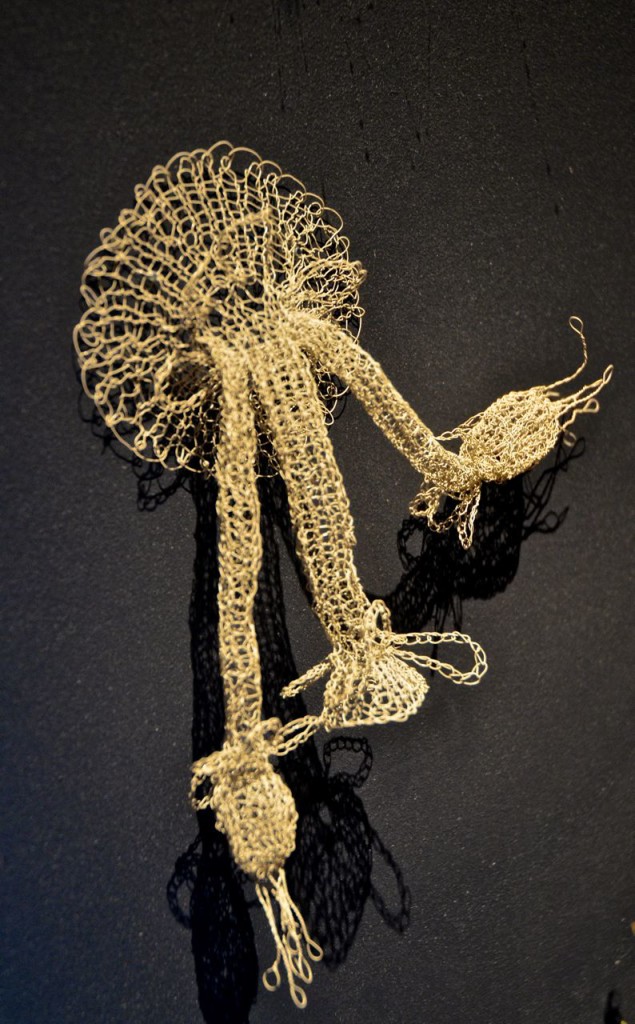 Thousands of people have joined the Wertheim sisters in creating many ‘sub reefs’. Each construction is a hand made art piece, or a crocheted item that is then joined with another participants work, building on and on until a full display is actualized. 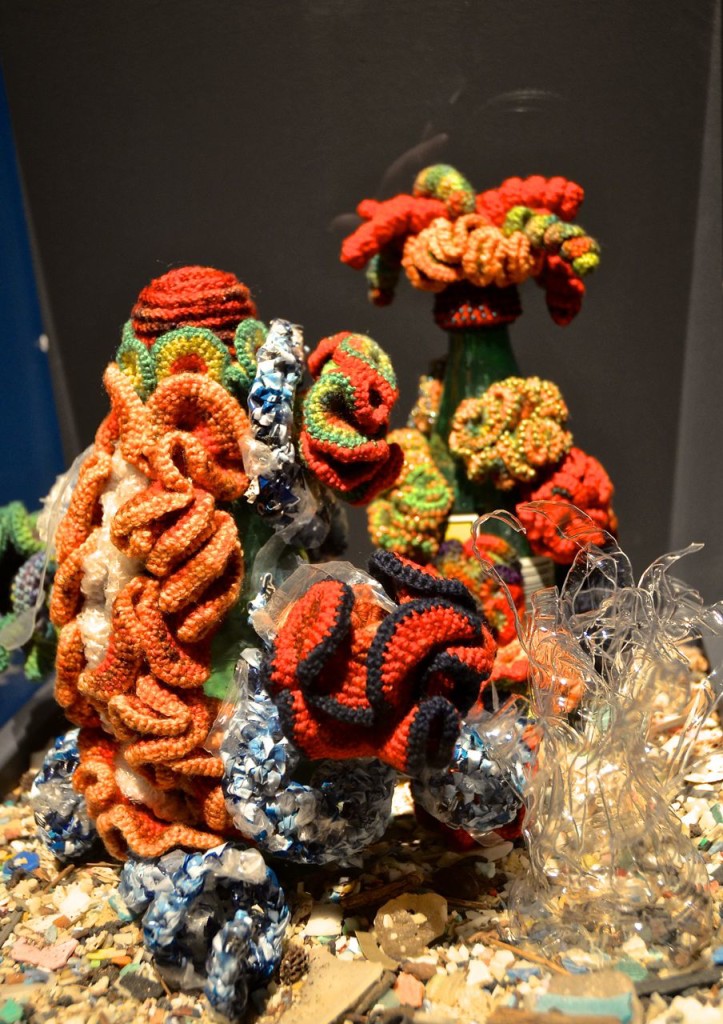 This is a display of a brightly colored healthy reef. 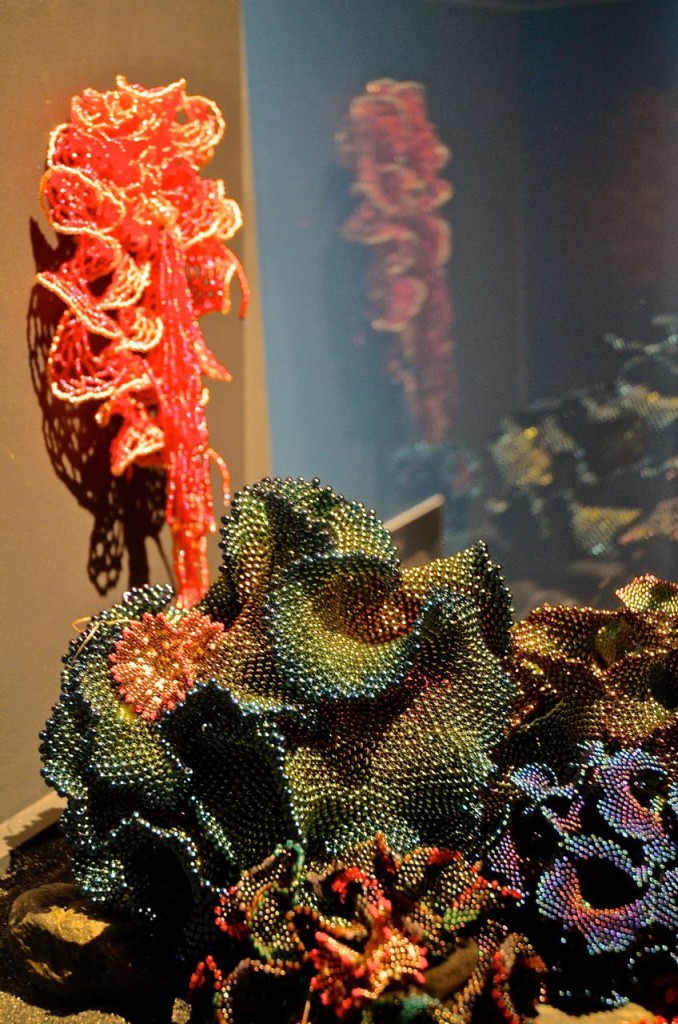 Some displays were totally amazing. This sub-reef was formed by threading thousands of beads onto a long skein of yarn. Then by using the hyperbolic crochet process the team of crochet artists construct this replica of a bejeweled, frilly sea life. 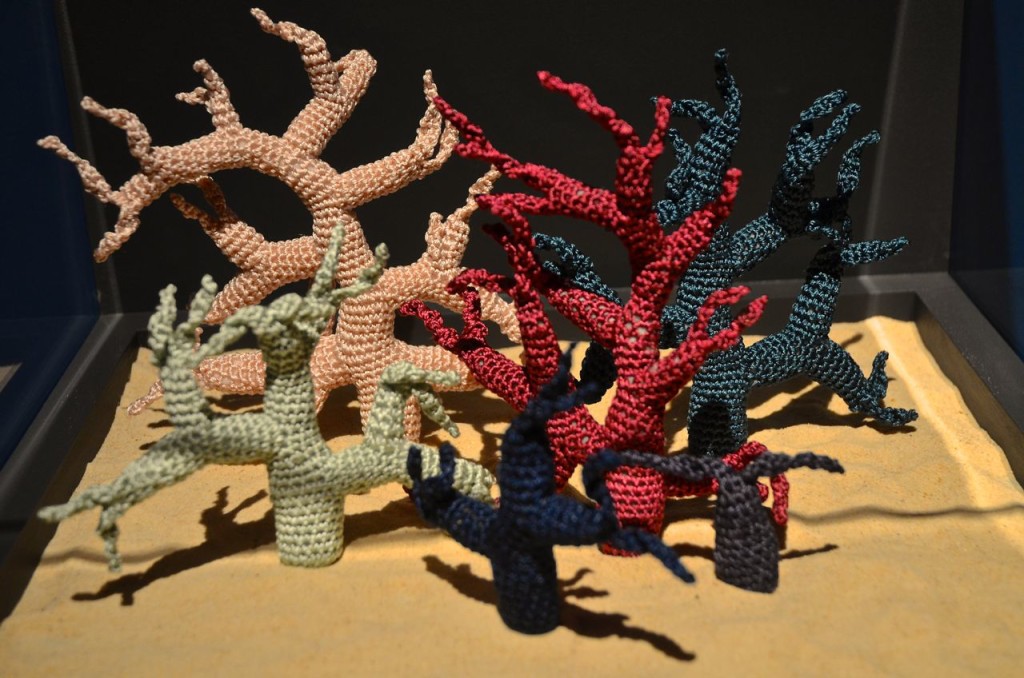 These stubby little sea corals were fashioned with a continuous circular crochet stitch. There are some variations to add branches. This is a display of healthy sea life. 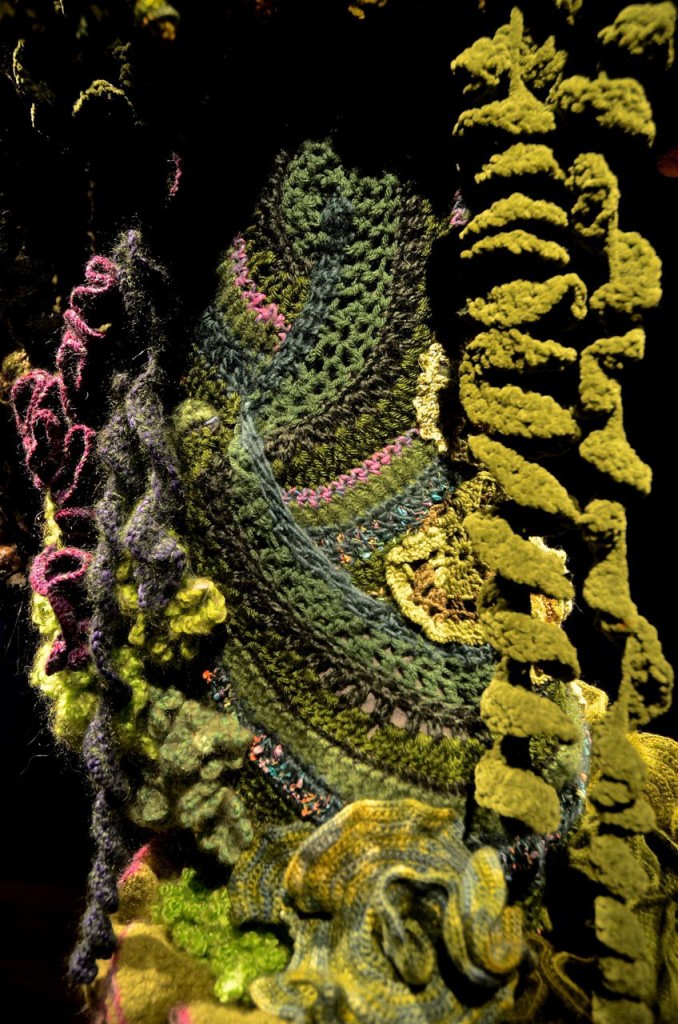 There are hundreds of hyperbolic crochet groups around the world working on local coral projects. 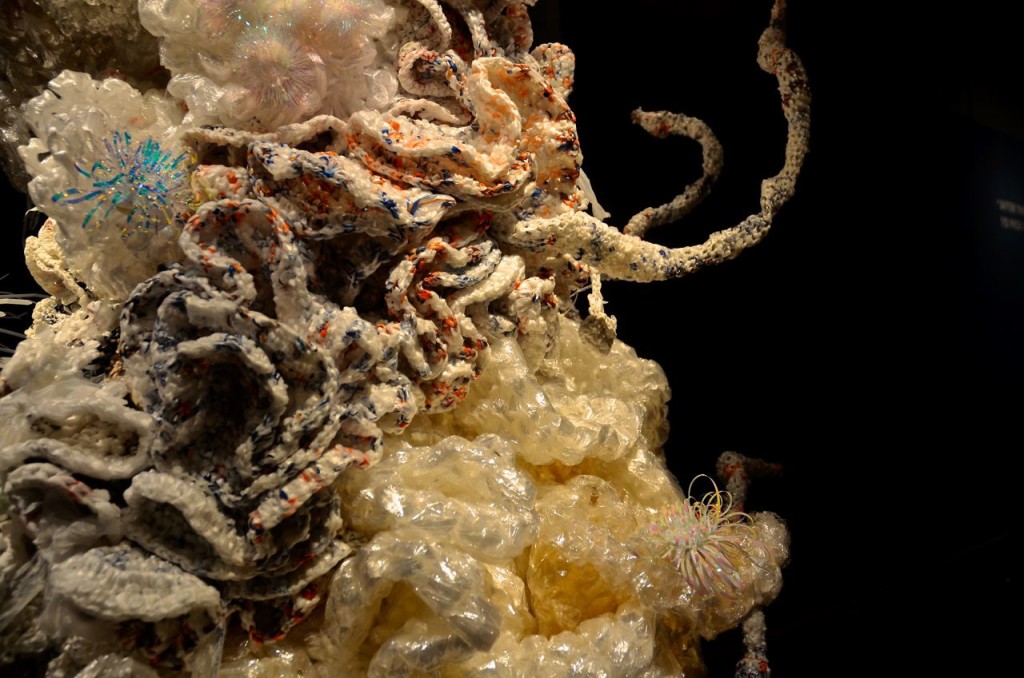 This display was made entirely from plastic bags.

It is estimated that 10 percent of the world’s plastic waste finds its way into the ocean, eventually ending up in the Pacific Ocean. Sea currents transport the waste into areas that are now called ocean dead zones, which are huge sections of slow circular moving currents that trap debris, making one large constantly moving mass of plastic.

This mass of plastic is slowly broken down into a plastic dust that marine wildlife mistake for food. Small fish consume tiny bits of this plastic dust as if it was normal plankton. Those smaller fish are then consumed by larger species and the plastic contamination moves up the food chain.

The UN Environmental Program estimates that over a million seabirds, as well as more than 100 thousand marine mammals, die every year from ingesting plastic debris. 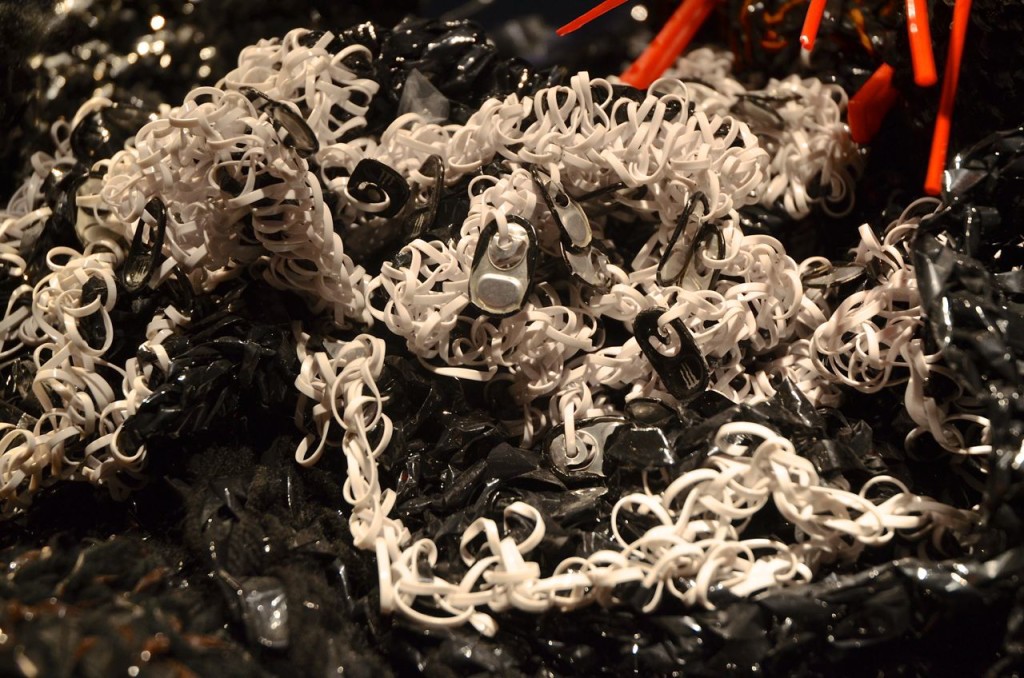 Discarded beer and soda pop-tops find their way into the sea of garbage that floats across the oceans, adding to the toxic waste. 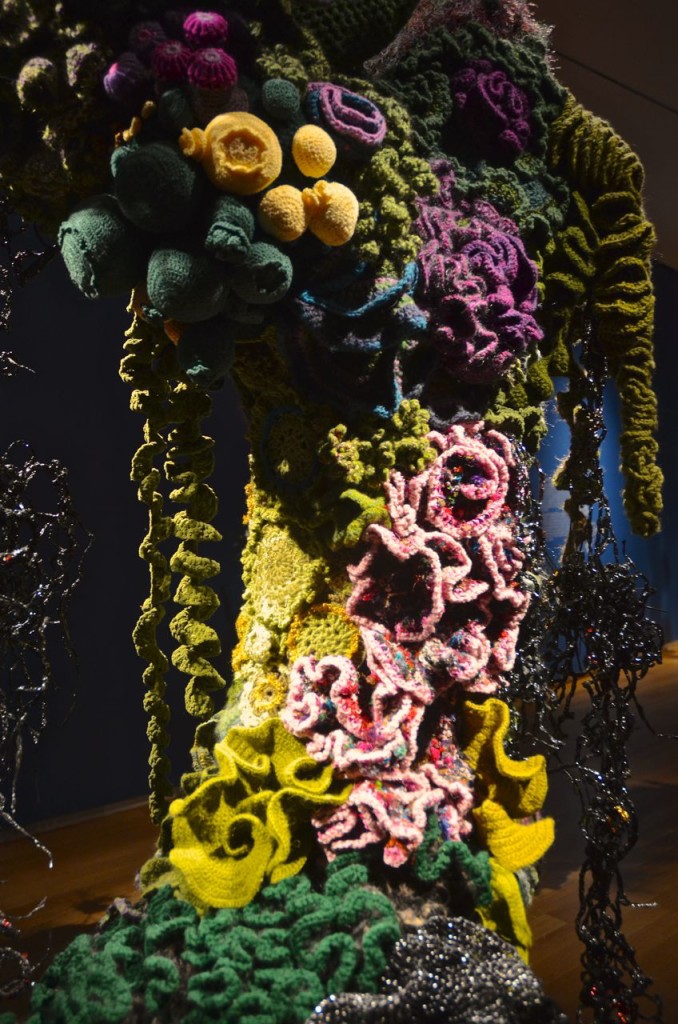 The colors, the craft and skill of the artists make an amazingly depiction of an undersea world that was both hauntingly beautiful as well as informative. My mother taught me to crochet many years ago and I greatly admire the handiwork of these artists. But more than that, this crochet project is a serious lesson about what is going on in our precious seas and oceans. This exhibit illustrates both the beauty and the devastation. Do not hesitate to see this exhibit if it comes to your area. I now look at my plastic consumption in a much different way than before I visited this crocheted coral reef.

And if you are interested in getting involved, start your own crochet coral reef group or learn more about this project here is a  link.

I would love to know what you think about this project and if knowing this kind of information makes a difference in your attitude about how we dispose of our plastic trash.

← AN INTERVIEW WITH SARAH, MY PROTAGONIST
I’M A GUEST BLOGGER TODAY →