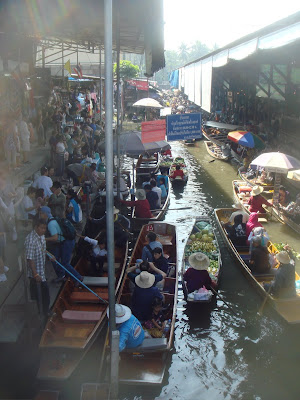 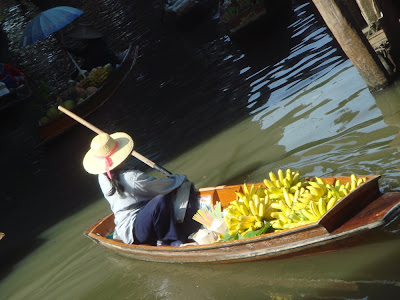 A little more than an hour drive outside of Bangkok is the Damnoen Sauak Floating Market. Basically it’s a shopping mall on water. Though slightly reminiscent of Venice with its many canals, with the abundance of brightly colored and exotic produce it would be hard to confuse this Thailand market place with that of the Venetian waterways. 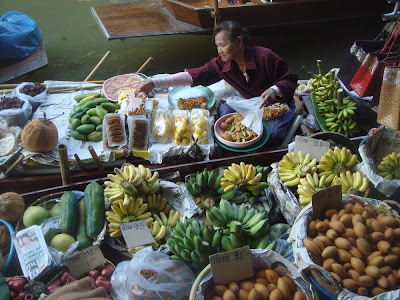 We arrived at the market on a sunny morning with the light reflecting brilliantly from the water. A walkway shrouded in deep shadows ran parallel to the water where throngs of people milled about shopping and tasting the food. There are two sections to this market. One section caters to the tourist with lots of stuff to buy. On the other side of a bridge marks the beginning of where the locals do much of their own purchasing though much of how they shop is through barter. 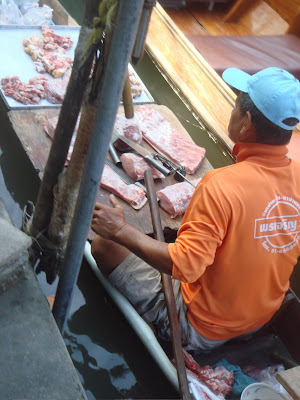 A butcher, with a full set of carving knives and much fresh meat floated about the canals selling sometimes snippets of meat but frequently he whack off a large chunk of meat and hand it off to a vendor who would cook it right there on the small boat. Women would float by with large cauldrons of bubbling hot cooking oil frying up a piece of meat that had just been handed to her by the butcher. 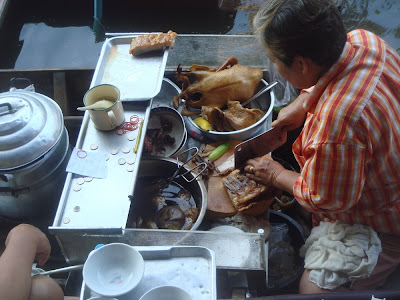 Fruits and vegetables of every kind imaginable were loaded onto the boats and the merchants maneuvering up and down the canals would conduct business as though this waterway were any normal street in the big city.

Tourism certainly contributes a great deal to the crowds in this market place though the local farmers do a great deal negotiating and purchasing as well. The large bags and bins of dried fish and spices that I saw were not intended for tourists but were for the local trade. 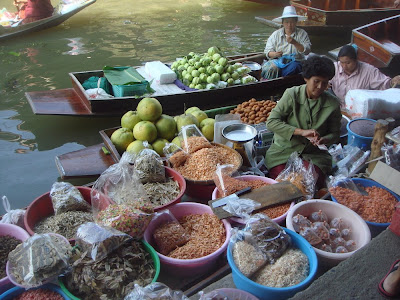 ← EATING AT THE STREET MARKETS IN THAILAND
CABBAGES AND CONDOMS →