The Thai people have a long and shared history with the elephant and since my visit to Thailand I have a broader understanding of these huge animals. I’d seen elephants in the Zoo and watched them do tricks in circuses, but to me they were simply large lumbering beasts with not much to offer outside of a bit of entertainment and an admiration for their majestic stature. 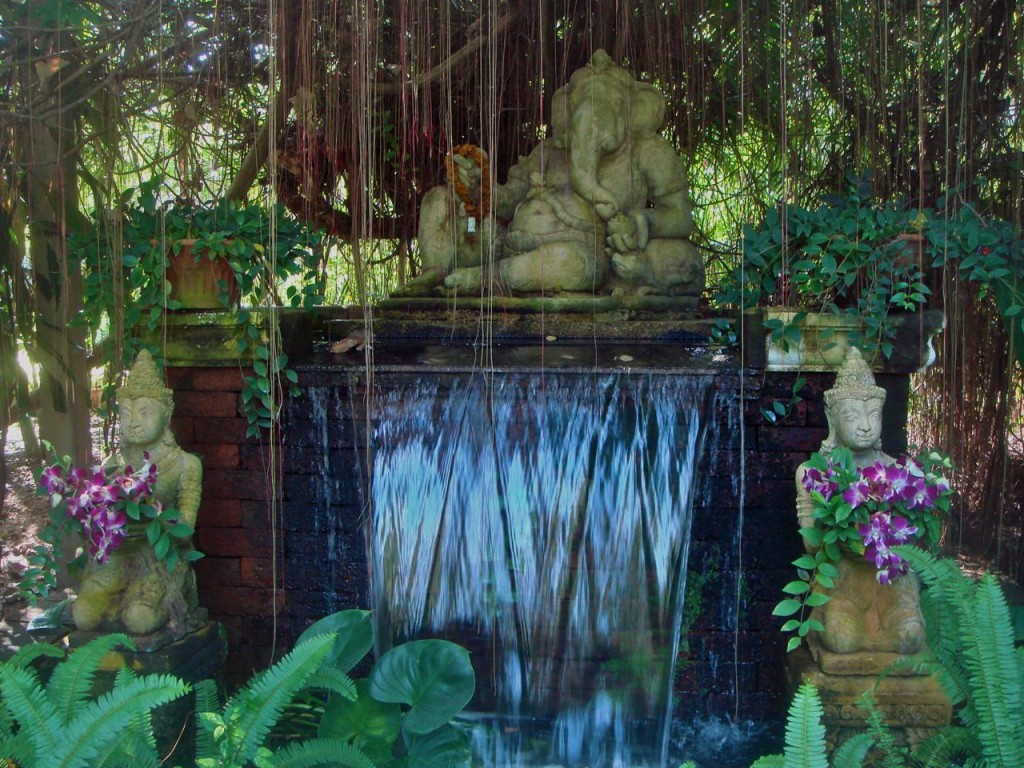 Ganesha, the Hindu Elephant God, an image seen frequently in gardens and parks throughout Thailand, is revered as the mover of obstacles, the patron of the arts and sciences, and the diva of intellect and wisdom. Ganesha’s birthday is celebrated around August 29 and the festivities continue for about ten days. 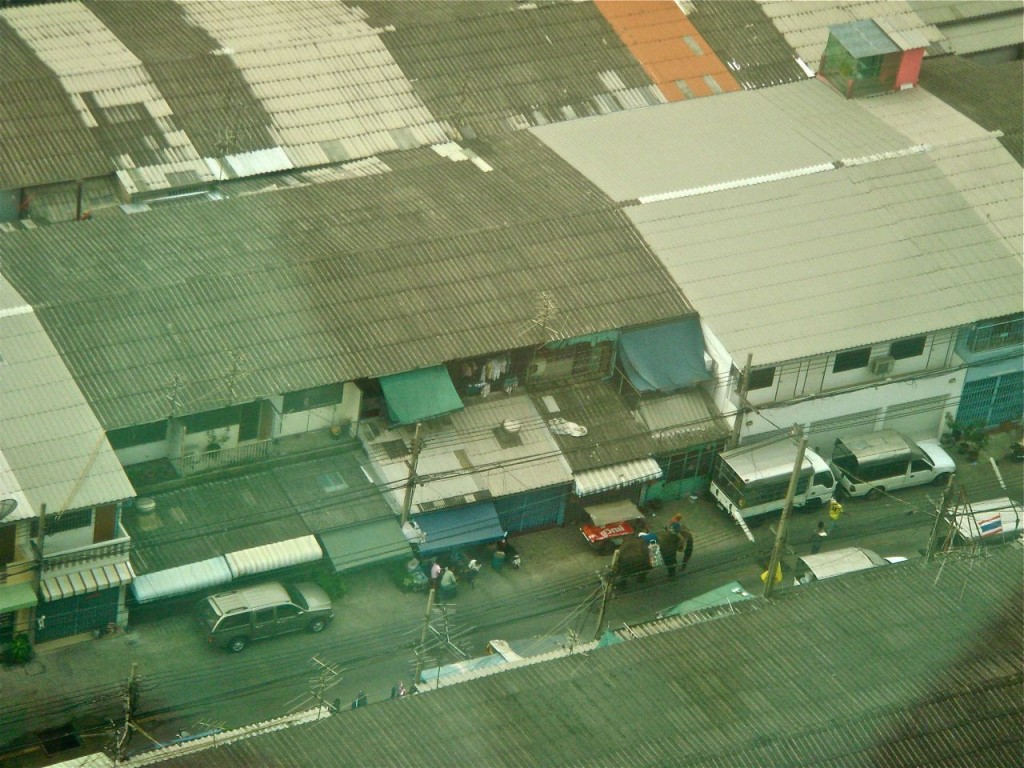 A hundred years ago there was an estimated 300,000 wild elephants living in the scrub-forests, in the jungle, and in the grasslands of Thailand. The wild elephant population has been greatly reduced and though there is no way of knowing exactly how many remain in the deep forested areas, it is estimated that as a result of habitat loss, there may be as few as 1,000 wild elephants scattered throughout Thailand.

Historically, many of the wild elephants were domesticated and used for transportation, war, and for the private use of monarchs. The elephant has been an important element in the work force of Thailand, transporting goods and people in remote, inaccessible areas and for years has been the muscle behind the logging industry which employed thousands of these animals and their handlers. But in 1989 the Thai government banned logging because it resulted in the extreme deforestation that led to major flooding and a mudslide that killed 350 people. This left the countless number of domesticated elephants and their handlers without ‘gainful employment’. 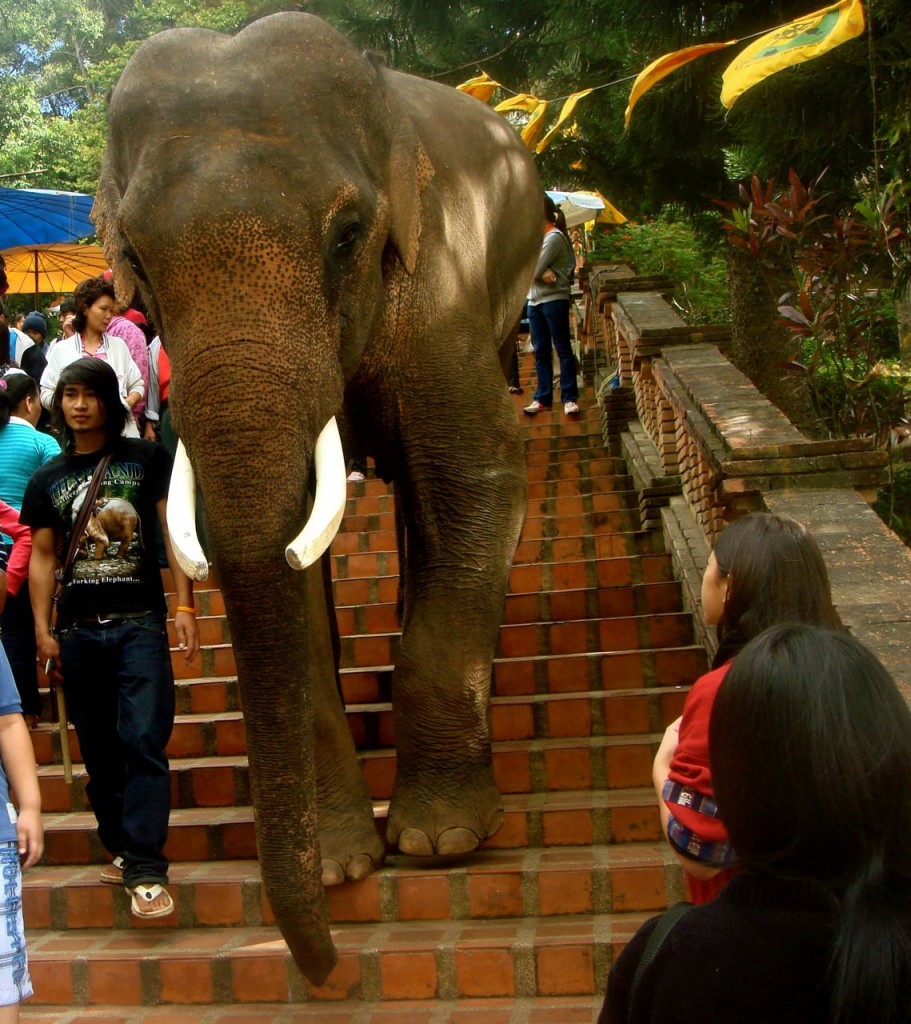 Some of these domesticated animals are still used for hauling and transporting and you can sometimes see these huge lumbering beasts plodding along the back alleys and side streets of major cities. But it is more likely that an elephant will be seen entertaining tourists at a temple or a park. 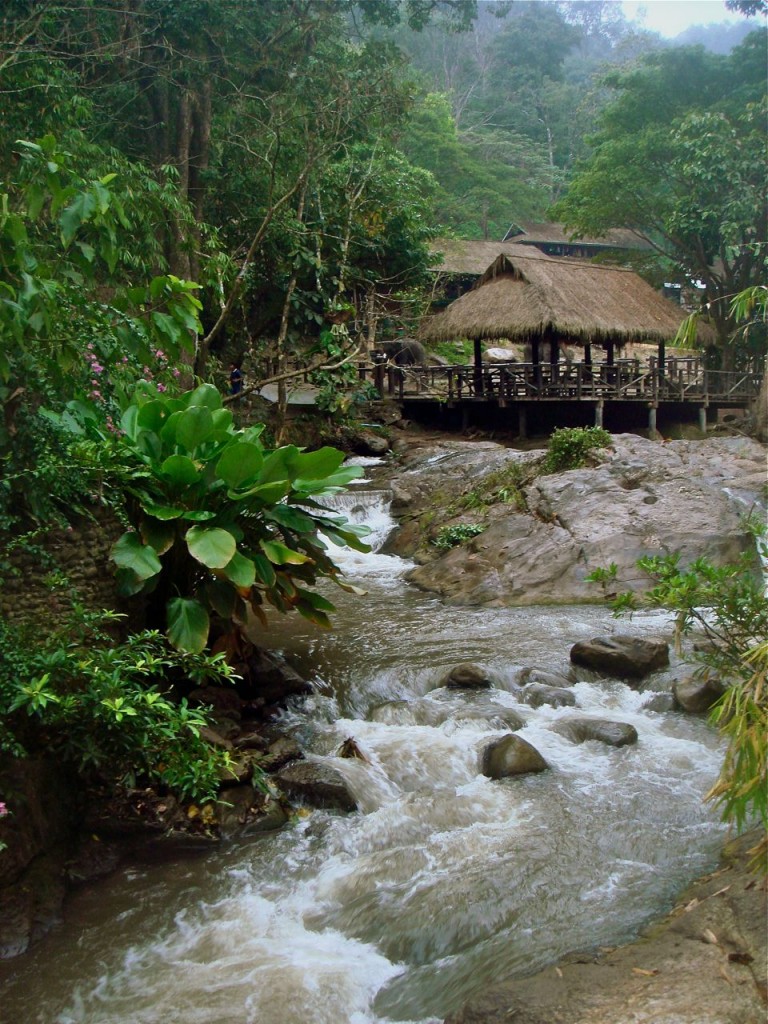 Masa Elephant Camp is one of over a hundred camps set up to utilize over one thousand of the unemployed domesticated elephants in the tourist industry. 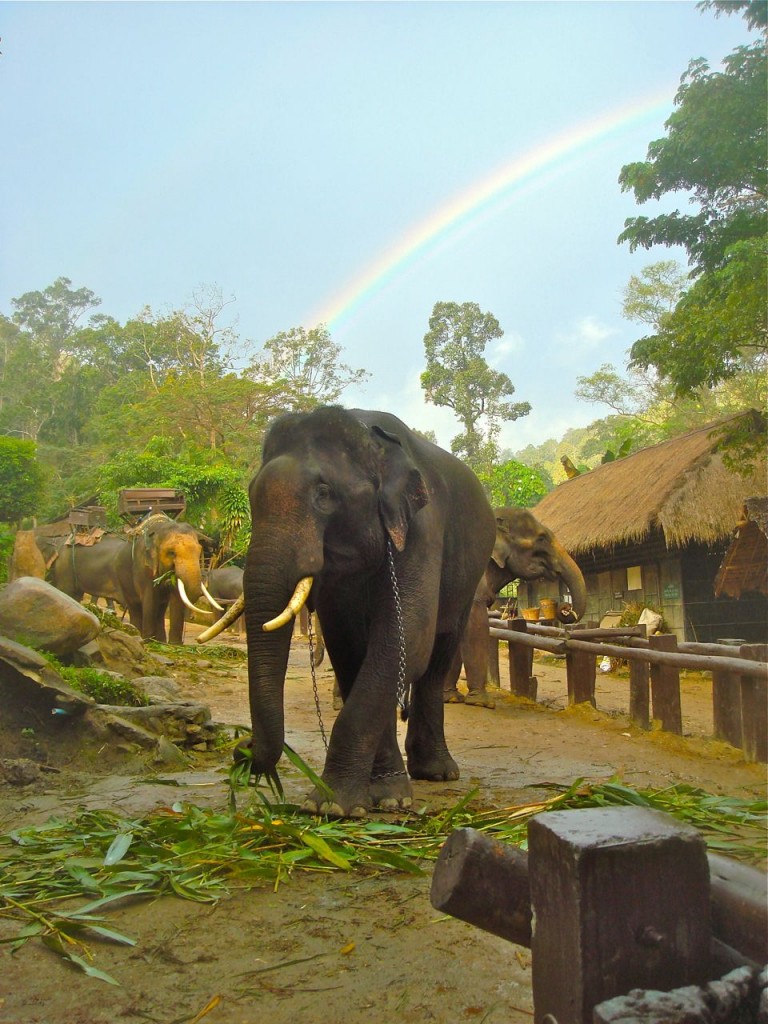 There was a major tropical rain storm as we drove into the hills to visit the Masa Camp. The rain stopped just as we arrived at the parking lot. As we walked along the muddy path to get to where the animals were kept, the air was thick and steamy, and a huge rainbow arched across the jungle sky. 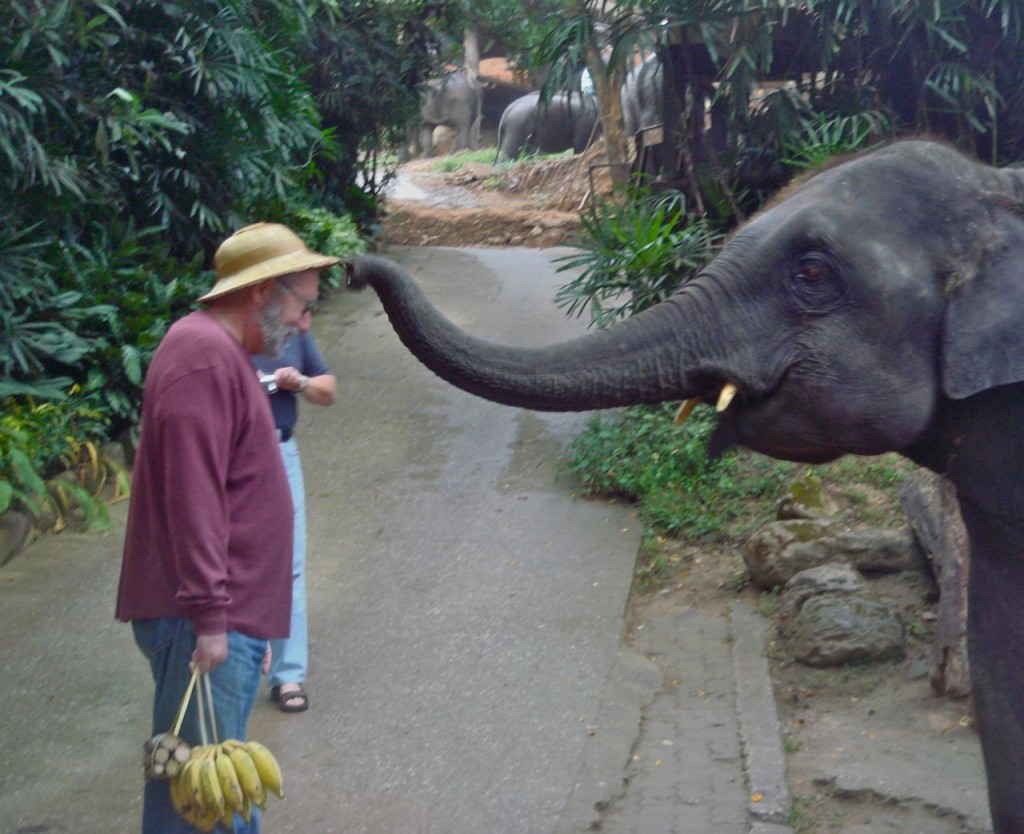 The tricks and entertainment begin almost as soon as you enter the camp. Visitors are encouraged to purchase bananas and sugar cane to feed the elephants. Our first encounter with an elephant was an adolescent male who’s trick was to place a hat on the head of a visitor. The young elephant was then rewarded with either a banana or a stick of sugar cane.

Some animal rights groups argue that tourists should not visit elephant camps, claiming it promotes cruelty, and that these animals should be turned back out into the jungle to roam freely. But this would not be a simple solution because of the elephant’s shrinking natural habitats. 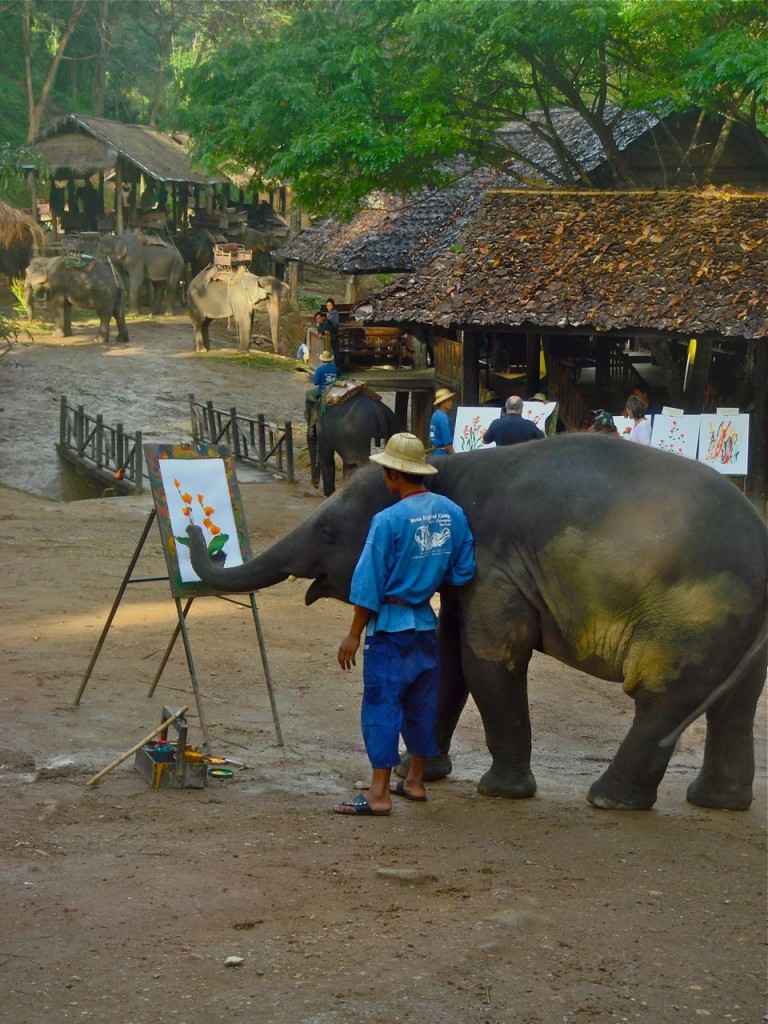 In addition to the admission fee, purchasing food for the elephants, there also paintings by the elephants for sale. 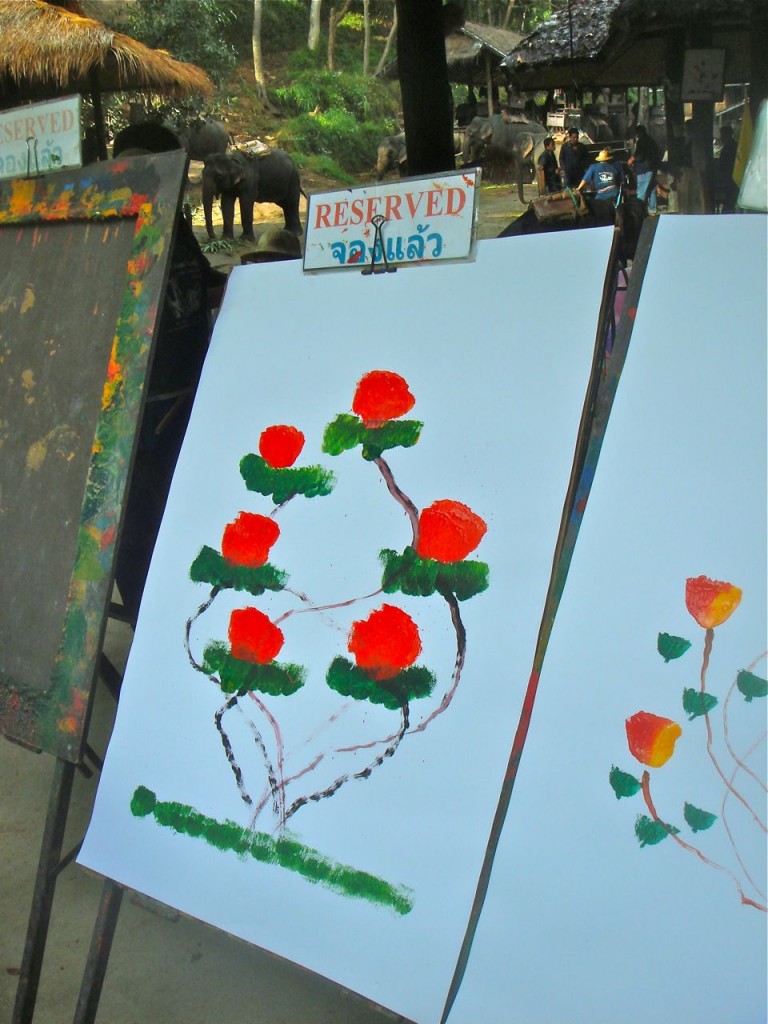 At this camp elephants begin training for the art world at a very young age and most paintings cost 2000 baht, or about sixty-three American dollars. 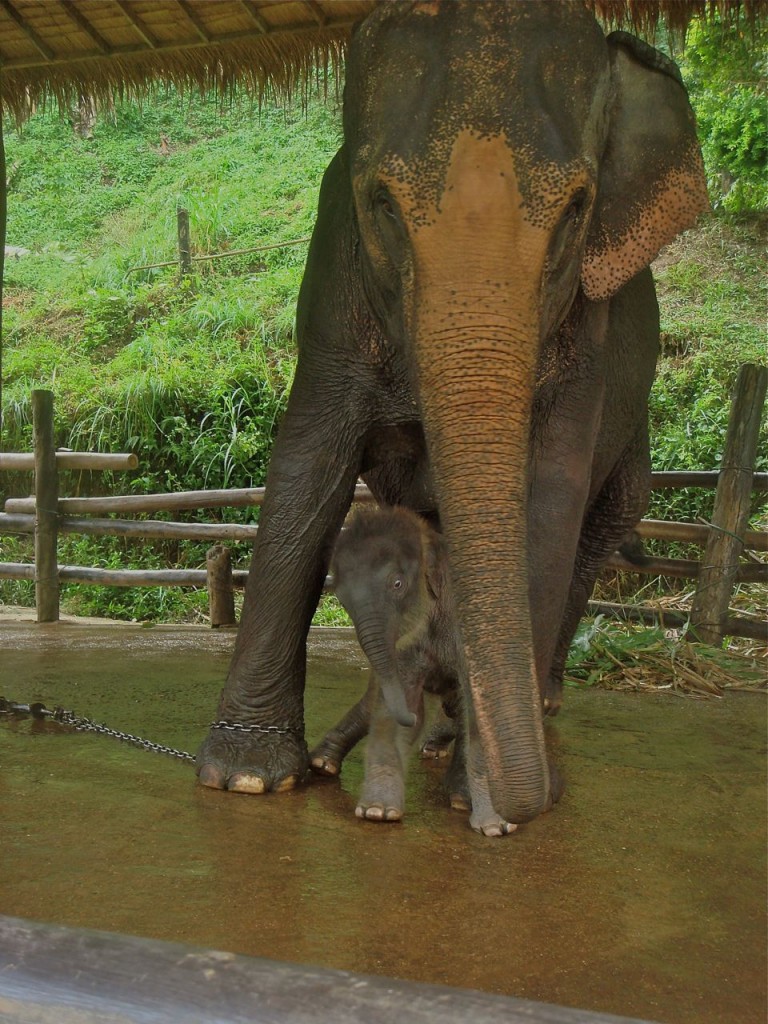 We saw a mother and her newborn in one of the sheds. The mom seemed agitated and nervous about having visitors and the baby never strayed far from her protection. Elephants have a life cycle that closely resembles of humans, with the exception of having a gestation period of 22 months. From birth until the age of 4 or 5 elephants are totally dependent on its mother’s milk for nourishment.

When an elephant reaches the age of 14 he/she is classified as a working adult. 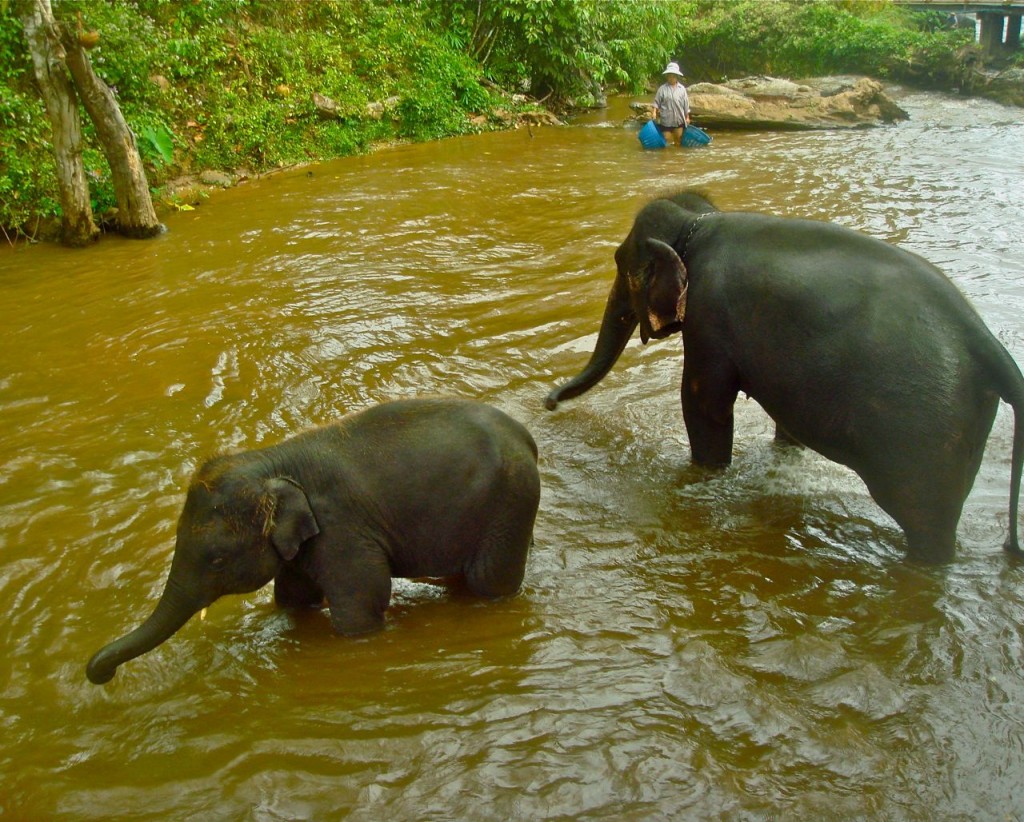 We watched this mother and her youngster splashing in the water, spraying themselves and having a grand time. That person standing in the water at the top of this photo is there to catch the elephant’s dung which is a valuable commodity and used as fertilizer. 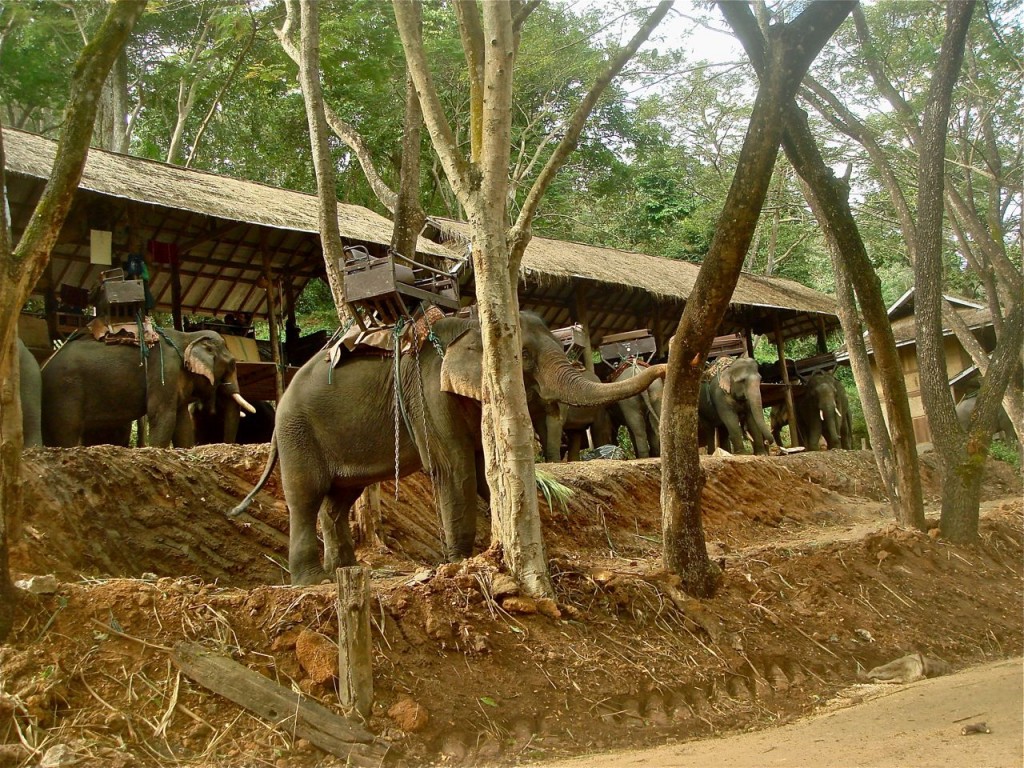 I must say it is quite a thrill to ride atop one of these huge beasts. 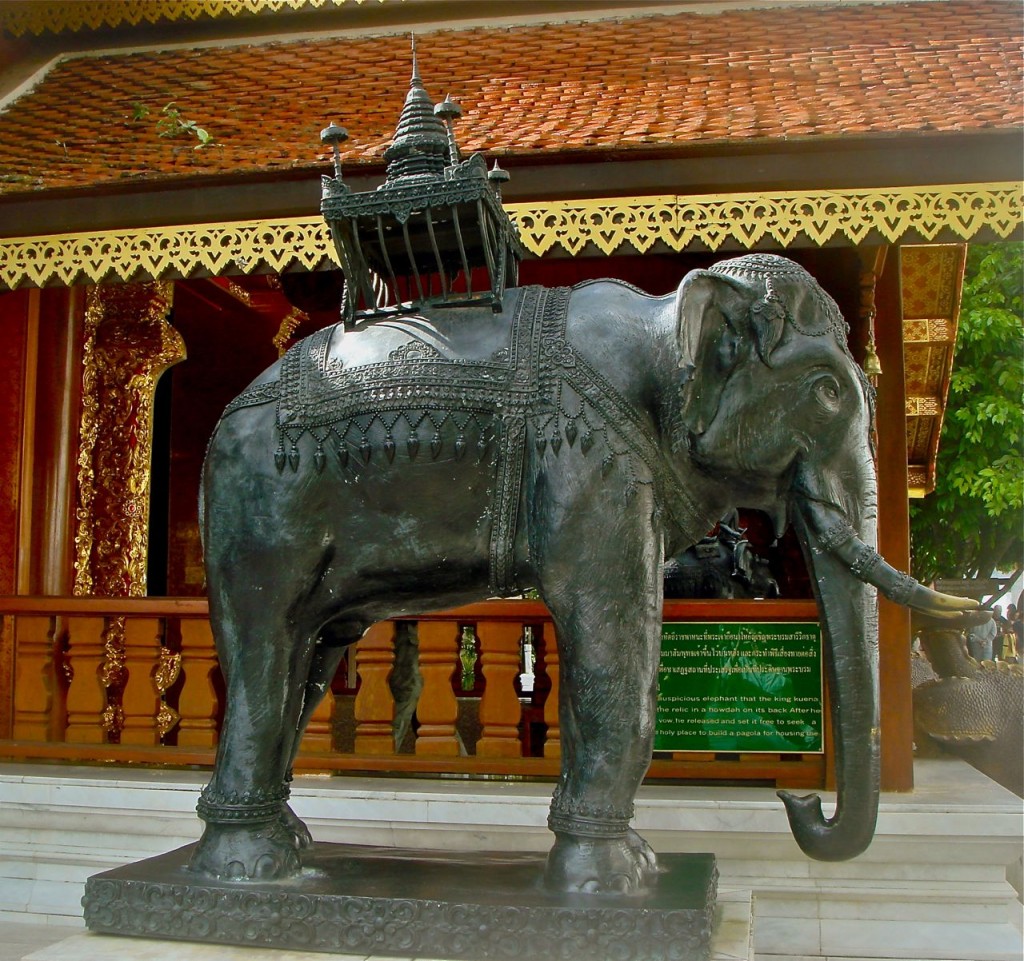 The modern elephant evolved more than 5 million years ago and in ending the blog post I’d like to leave you with a few tidbits about elephants.

Female elephants do not have tusks. The male elephants grow milk tusks that shed before the calf reaches its second birthday. Then permanent tusks begin to grow and are actually teeth (incisors) that are made of ivory.

An elephant’s trunk grows to about 6 feet long and can weigh over 300 pounds. It has a small finger-like tip, which can distinguish size, texture, shape, and temperature. A trunk has approximately 100,000 muscles and can lift a 1,300 pound log or pick up a single penny.

4 comments for “ELEPHANTS IN THAILAND”