It’s the last week in October. That means soon there’ll be lots of ghosts and goblins walking the streets begging for sugary treats. The TV stations will replay classic vampire and zombie movies. Some intrepid epicureans will delight in eating marzipan eyeballs. We’ll all have a ghoulishly delightful time. But let me take you back to 79 AD, and tell you a true horror story that befell an unsuspecting seaside resort community.

It started out like any normal day. The sky was a brilliant blue, the Mediterranean Sea calmly lapped at the seashore, the air though was a bit humid. There had been some rumbling heard coming from a mountain in the distance, though this was not unusual for the area. There had been a devastating earthquake twenty years earlier, though this noise did not seem to concern anyone on this lovely day. Mount Vesuvius was known for making noise from time to time. The earth trembled now and then, yet no one thought too much about that either. It was just life as usual in the peaceful town of Herculaneum. But this town would soon experience a nightmare and within twenty-four hours the entire area would be buried under sixty feet of ash. 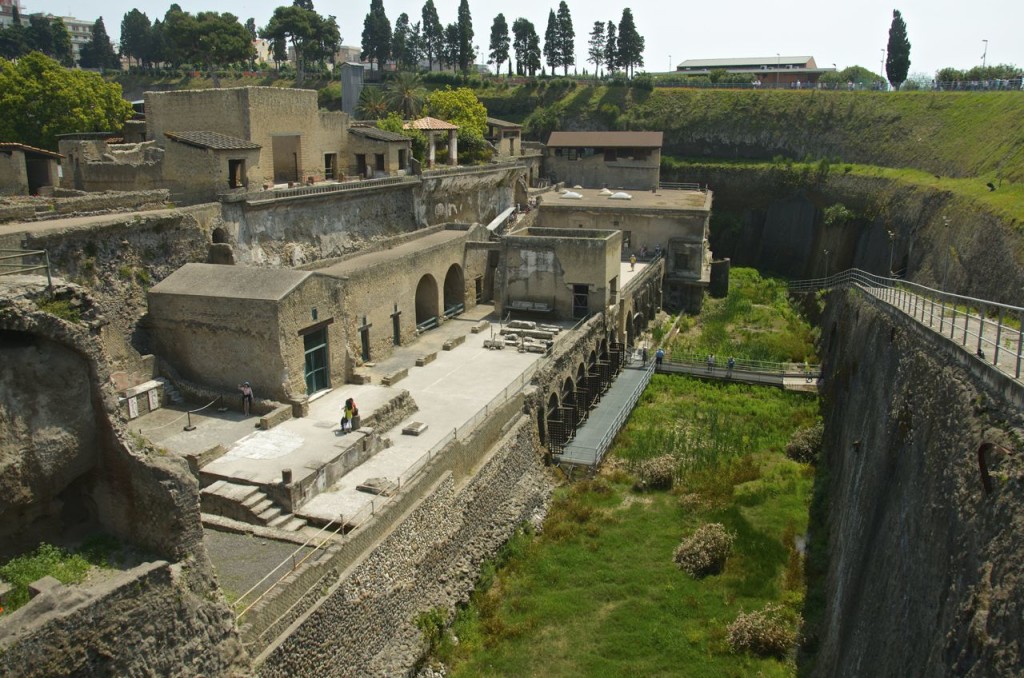 Herculaneum was an up-scale seaside resort with a population of 5,000. It was a vacation playground for the rich with a reputation for a hedonistic flair. There were heated pools in the men’s communal baths; walls were brightly decorated with mosaics and frescoes that more than suggested coupling, fostering the holiday atmosphere. There were outdoor eateries on nearly every street corner and bountiful catering halls that offered the discerning wealthy visitor everything from exotic foods to a fanciful frolic between the sheets. 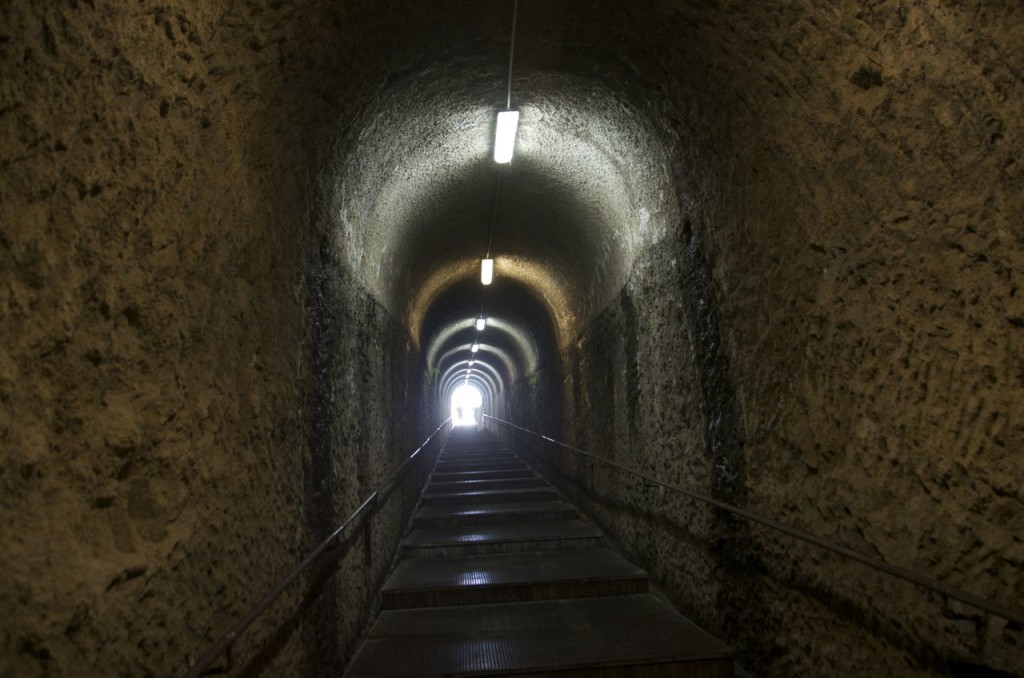 The only way into this city, now frozen in antiquity, is through a long tunnel that has been carved down through sixty feet of lava. The walls in this dark tunnel are deeply gouged from drills and chisels, and have an eerie resemblance to what could have been the claw marks of unfortunate souls trying to escape the horror of that day. There are no echoes in this darkly lit walkway. I wondered, could this volcanic travesty suck up sound? Could it swallow the frantic cries of the hysterical? The only sound I heard was the trickle of water that ran in a gutter along the edge of the steps. 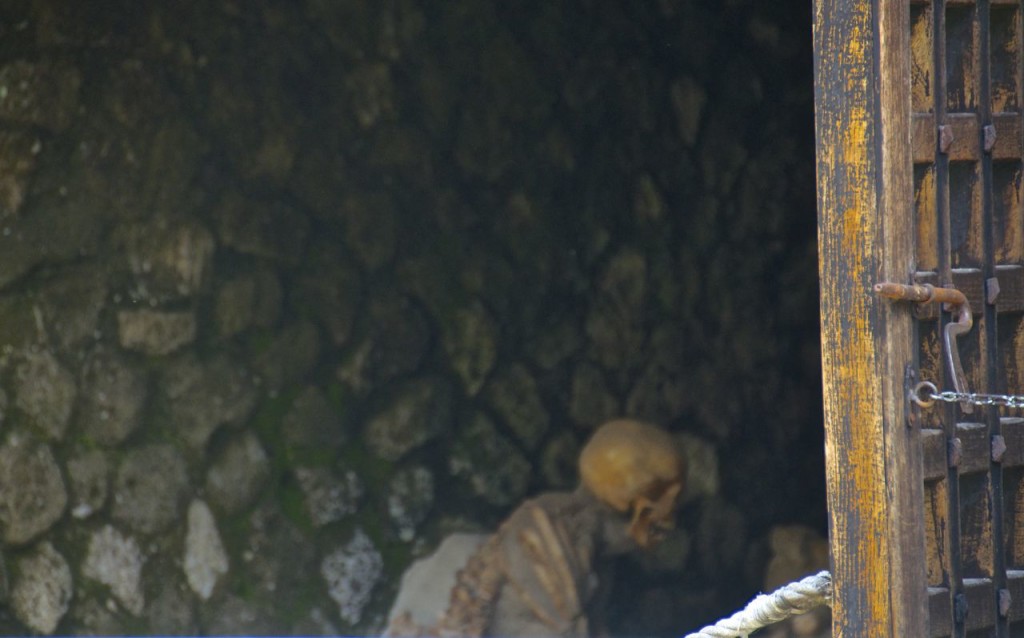 Upon leaving the tunnel I stepped out into the bright Southern Italian sunshine and walked across the bridge that would take me to the streets of the city. This would have been where the Mediterranean Sea touched the land. This was where the wealthy docked their boats and this is where the only sign of Herculaneum citizenry, 300 skeletons nearly fused together, was found.

Unfortunately this area was closed to viewing the day I visited, due to preservation work. I was only able to get a scant view into the nearest boathouse. There was but one skeleton visible. The poor wretch was sitting, poised as if frozen in a moment while perhaps conversing with a companion located further into the shelter.

Who were these 300 people huddled together at the edge of the Mediterranean Sea? Did they believe that the boathouses would be a safe place to hide? Did they believe they would be rescued? They were safe for a while. It seemed that the violent activity of Mt. Vesuvius was heading only in the direction of Pompeii, a huge metropolitan city 30 miles to the southeast of Herculaneum. The pyroclastic flow raged down the mountainside, heading straight for Pompeii, engulfed the city while it slept. Bodies were found scattered throughout the Pompeii archeological site, some hidden in corners and crevices, hoping that in the end it would all come to nothing. Few in this city escaped the rage of the volcano and there is evidence that many people suffocated in the ash before they were covered in the molten rock.

The volcano had initially erupted with such force that it is estimated that two hundred tons of rock were blown 20 miles into the air. The rocks and debris then rained down onto the surrounding area. Yet, there was no lava flow coming towards Herculaneum giving the residents time to evacuate.

Then twelve hours after that first blast, Mt. Vesuvius exploded again. This time a pyroclastic flow of lethal ash, poisonous gases and lava rushed down onto Herculaneum traveling at hurricane speed. It took only six minutes to reach the resort community. It is estimated that the crowd of 300 waiting to be rescued died within two seconds once the flow reached them. They did not suffocate as had the citizens in Pompeii. They died instantaneously. The skeletons in the boathouses were frozen in time, suspended in the last second of their lives. A thick poisonous cloud estimated to have been 900 Degrees F. engulfed them, instantly cooking their brains and evaporating their flesh.

It happened so quickly that the sleeping children did not wake up. They were forever entombed with their heads cradled on their mother’s laps or snuggled up against one another near a rock wall.

An ominous red clay surrounds the skeletons. There is no red clay common to the area and the archeologists were stumped at first. Then they realized that the discolored clay was the result of skulls exploding in the high temperature. 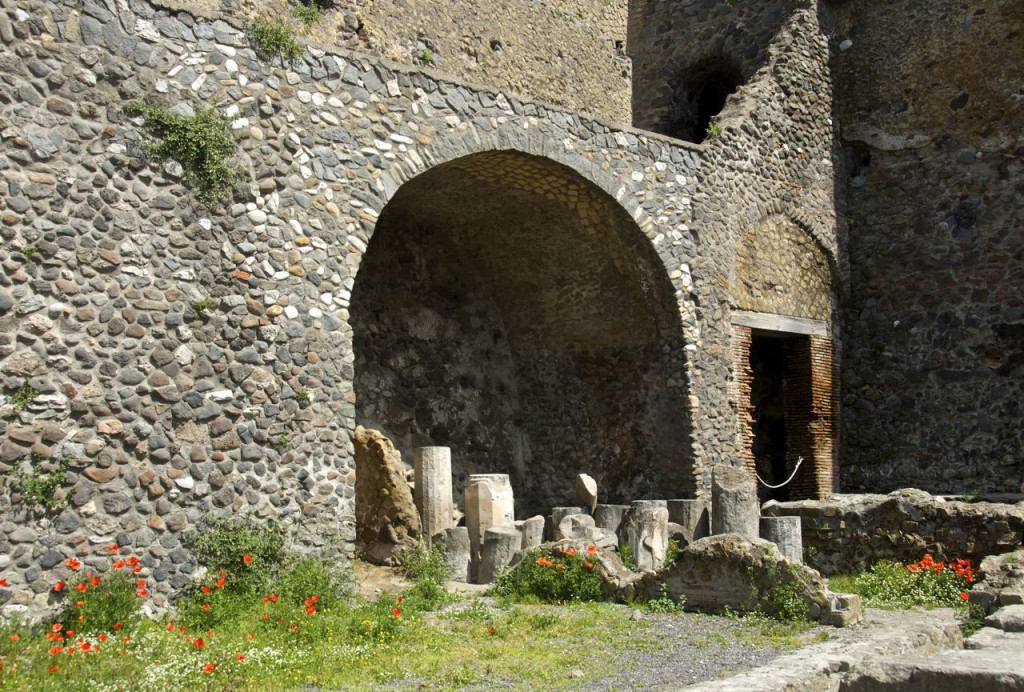 As I stepped away from the boathouses and moved into the city proper I saw red poppies growing along the ruined city walls. A shiver slid across my shoulders as I watched them tremble in the slight breeze for they were the same color as the clay that surrounded the skeletons in the boathouse. 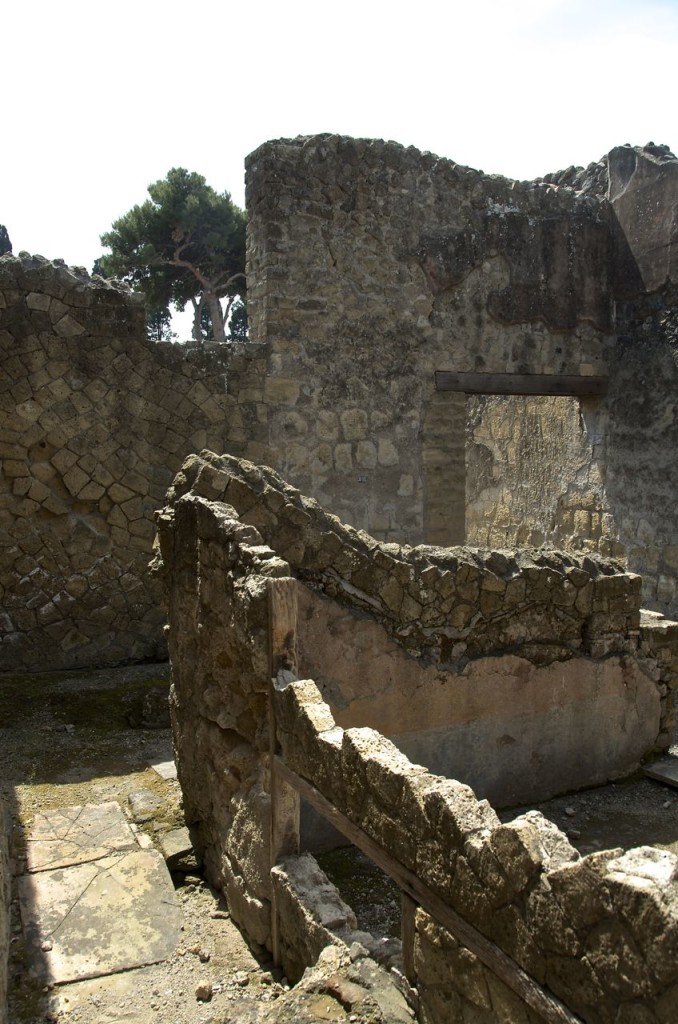 I expected to see a huge crowd of tourists trekking through these ruins. Yet, the place was quite empty. It was midday. The sun was directly overhead. The few shadows that I did see were extremely dark. It was almost as though these shadows were a part of the remains, the shadows, like the skeletons stopped forever, trapped in the unbelievable horror of that day. 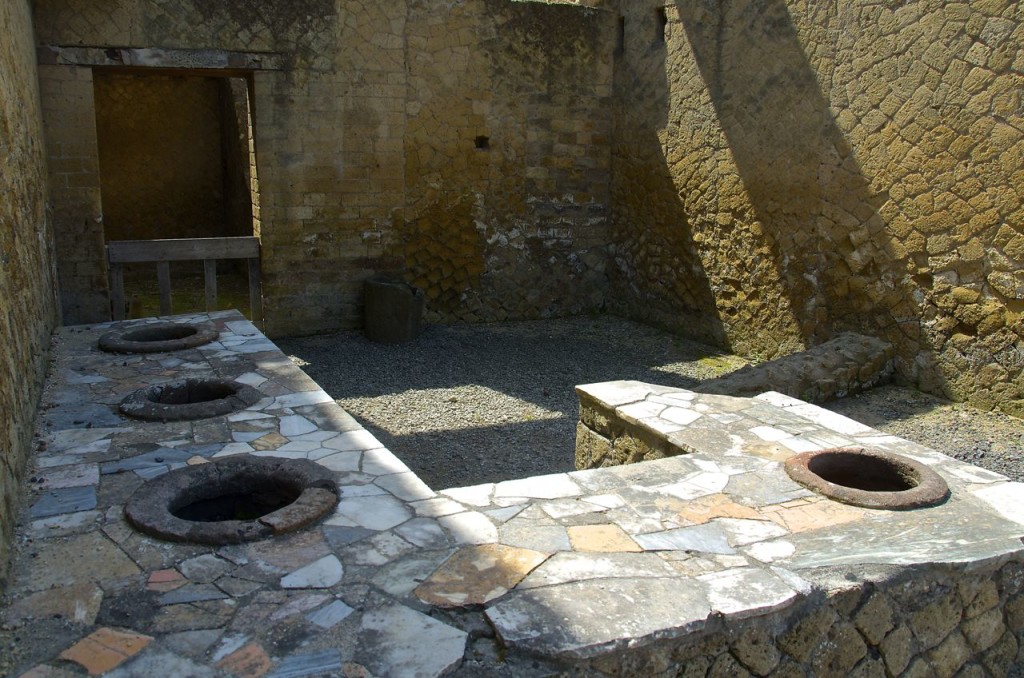 The corner eateries are of course empty, too. The kettles, the fires, the food and sour wine wasted, evaporated in the pyroclastic apocalypse. Some menus can still be seen scratched on the scanty walls.  There was no smell of olive oil frying, no odor of a pigeon stew simmering in an earthen crock. I wondered if the only customer might be a hungry spirit. 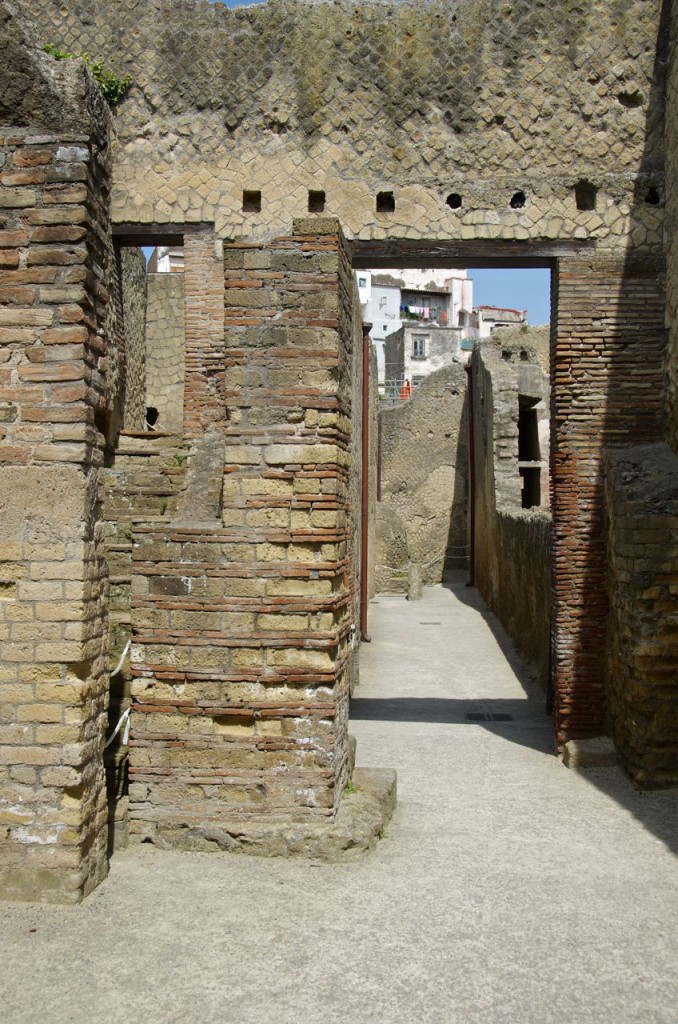 It was a lonely feeling place. The sound of the noisy bustling community of Ercolano, the town that has grown atop the ruins of Herculaneum, does not reach down into these fabled buildings. There are no horns, no squealing breaks, and no children calling to each other in play. The streets and walkways of this city locked in antiquity are silent dusty paths that circle around and around as the archeologists dig, still searching perhaps for someone, a skeleton of a lost hidden soul who did not escape. 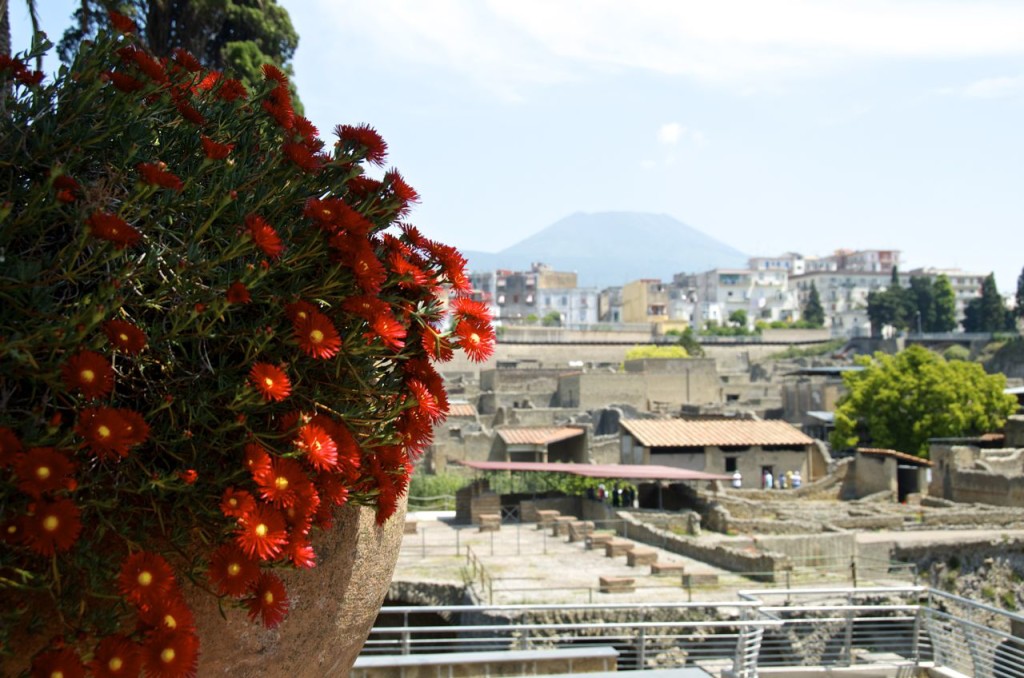 Upon leaving, I took one last look at Herculaneum. It had gotten quite hot, a bright haze hung over the area. Mt. Vesuvius loomed quietly in the background. It all looked so peaceful. I could not even begin to imagine the horror of that day 2000 years ago.

← GONE BUT NOT DEAD, A SHORT STORY BY MARGARET AND STEVEN MENDEL
CRANBERRIES — AN ARTICLE IN KINGS RIVER LIFE →