Cemeteries are filled with history. I did not go to The Green-Wood Cemetery for a history lesson. I went to see the monk parakeets that have been nesting in the spires of the cemetery’s gatehouse since the 1960s. I wanted to do this for years. Other visitors to the cemetery have told me that as they walked up to the entrance, the wild chatter of the parakeets was comical and totally out of character for our metropolitan area. I’d heard that the nests slouched in huge bundles from the elegant spires of the entranceway to the cemetery making the pinnacles look otherworldly. So I set out last Friday with a friend to see these exotic birds. And of course, I brought my camera with the hope of getting some good photos. 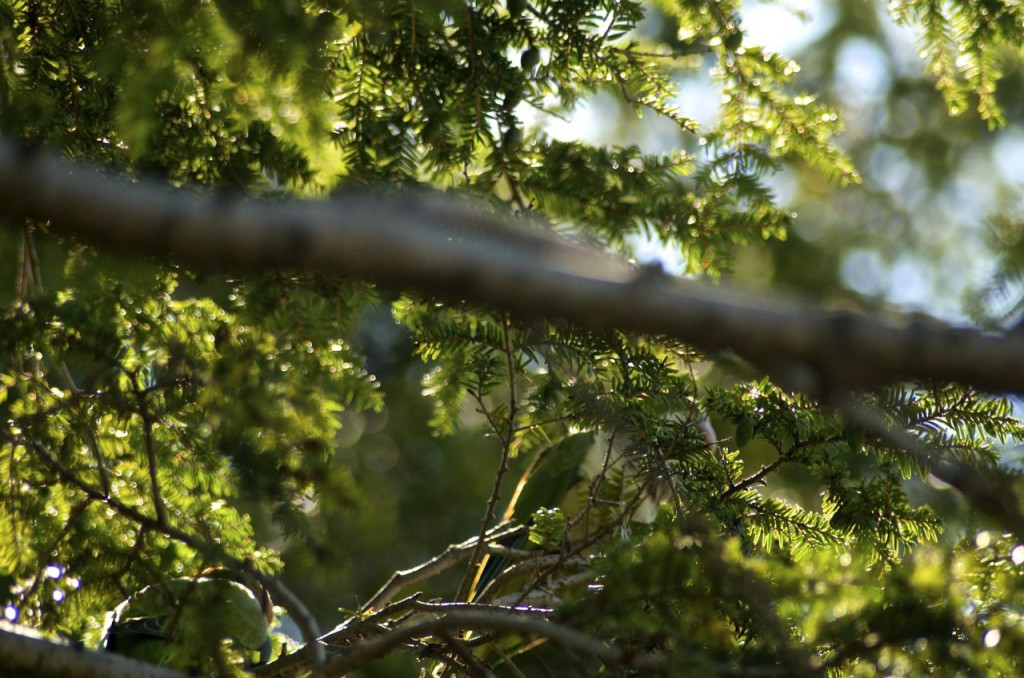 Well, even with my best lens, these birds eluded me. They flew into the trees as we walked towards the entrance of the cemetery and disappeared into the evergreens that flank the walkway. We could hear them squawking and chattering to each other as they flitted from limb to limb. The above photograph is the best view I could get of these elusive monk parakeets. Can you see the two birds? 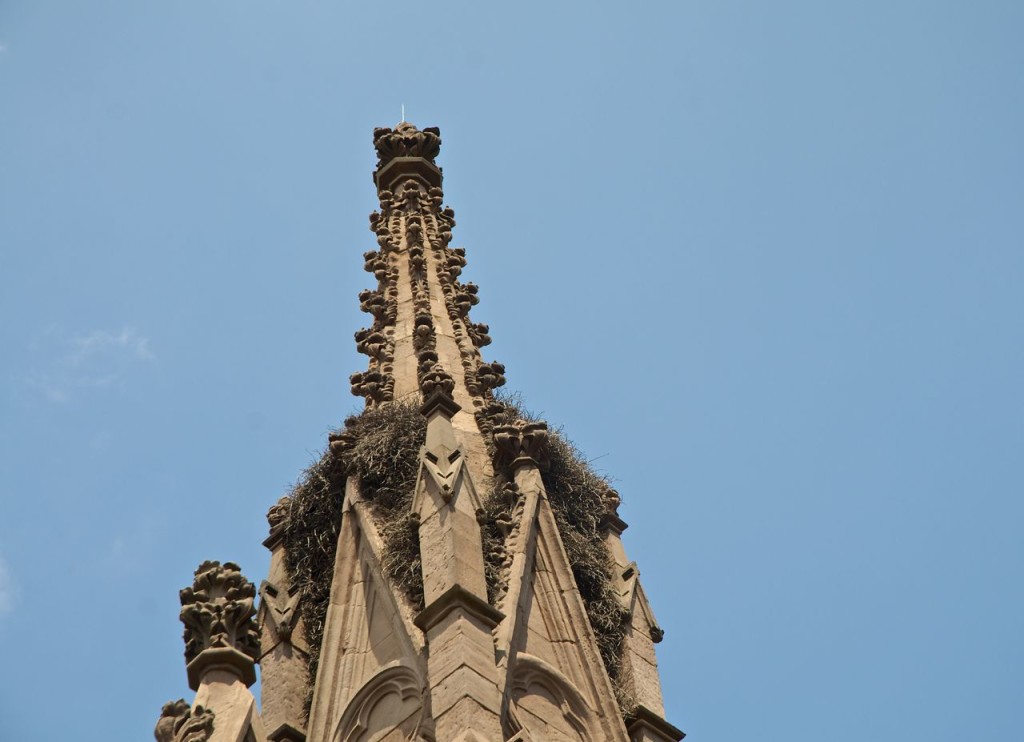 Unfortunately since my friend had last visited this cemetery, the nests have been disassembled due to needed repairs on the gatehouse where approximately 75 monk parakeets had set up housekeeping.  What I had been told were huge, carefully constructed nests that hung down in giant swaths of intricately woven debris were now only a few outcrops of twigs and branches.

The monk parakeets were first sighed in approximately 1967 when a crate of these these birds broke open at JFK airport. Since our winters in NYC are similar to those of the Andes, where the birds originated, they were able to thrive. 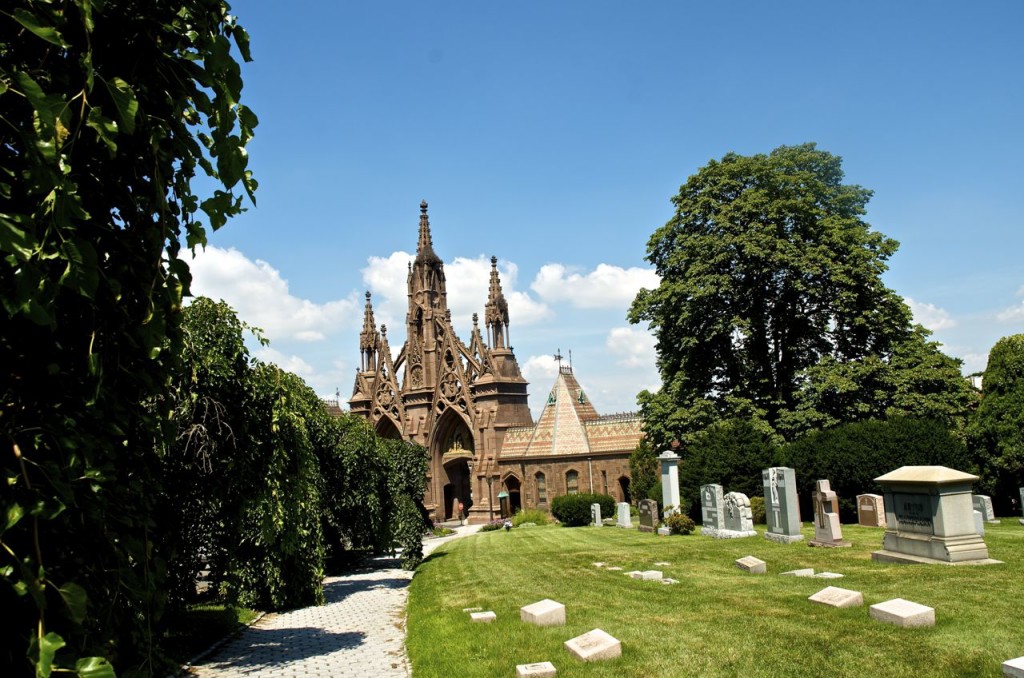 The Green-Wood Cemetery is probably the most ideal situation for a colony of parakeets in Brooklyn. The administration tolerates their presence and considers them a benefit because unlike pigeons, which roosted in the gatehouse before the parakeets arrived, their excrement does not damage the structure. There are other monk parakeets colonies in Brooklyn, though many of those locations have been under major stress in recent years, due to poaching, nest removals, and the replacement of grass in athletic fields with artificial turf. 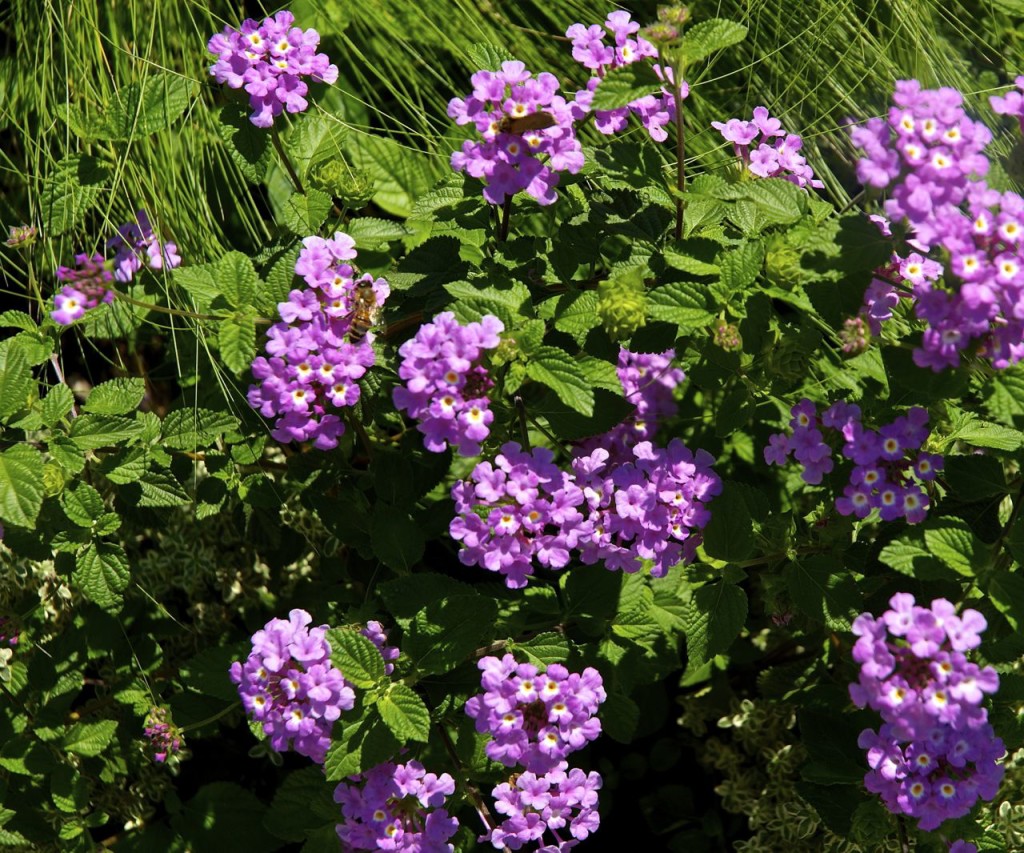 We spent almost an hour trying to get photos of the monk parakeets. Calling it quits we decided to venture into the cemetery. As we made a left turn onto Battle Avenue, we saw a lovely garden of purple flowers. Bees buzzed everywhere. The bright sunlight illuminated the flowers, making them look nearly artificial. A sign at the edge of this brilliant garden stated, “Purple Rain, in Memory of Prince.” Ah, Parakeets and Prince. This was no ordinary Cemetery. 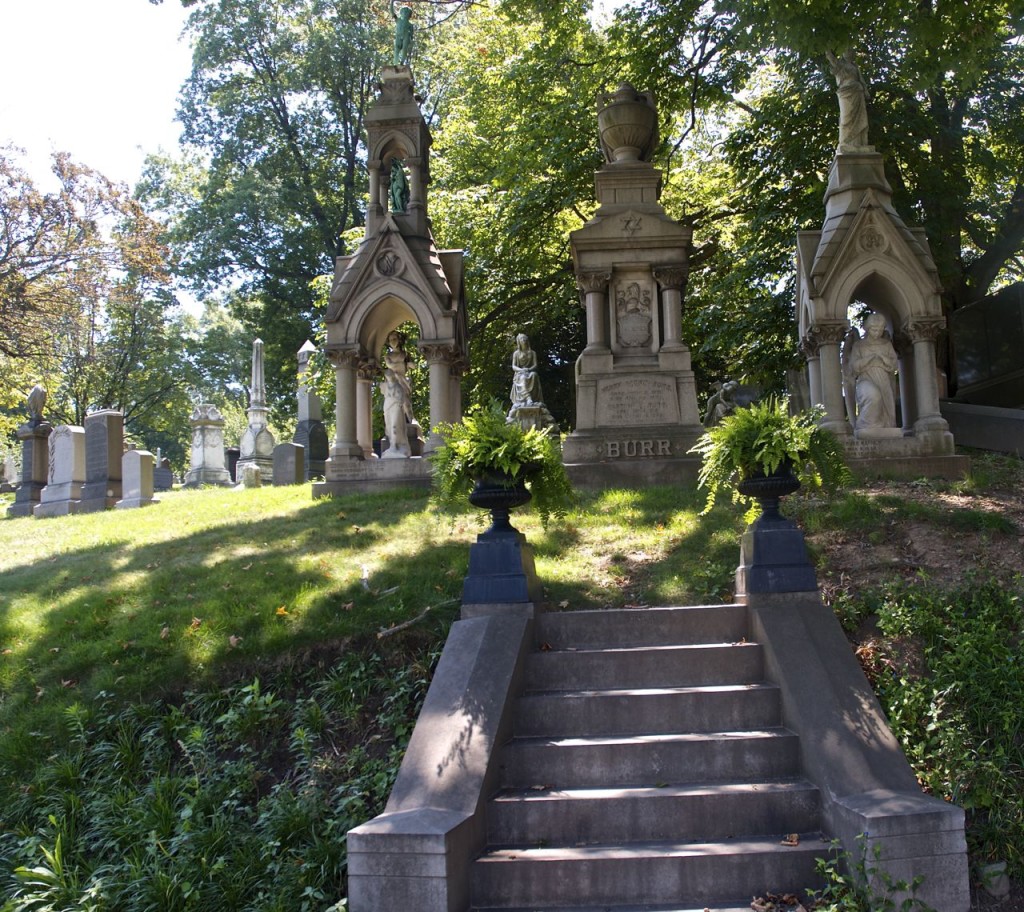 One of the first large monuments we came to was of the Burr family. As it turned out this was not the guy from our history books who shot and killedAlexander Hamilton in a duel. This was Aaron Burr’s cousin’s family plot, Henry Aaron Burr, an accountant who made a great fortune in 1830 when he invented a hat-making machine. 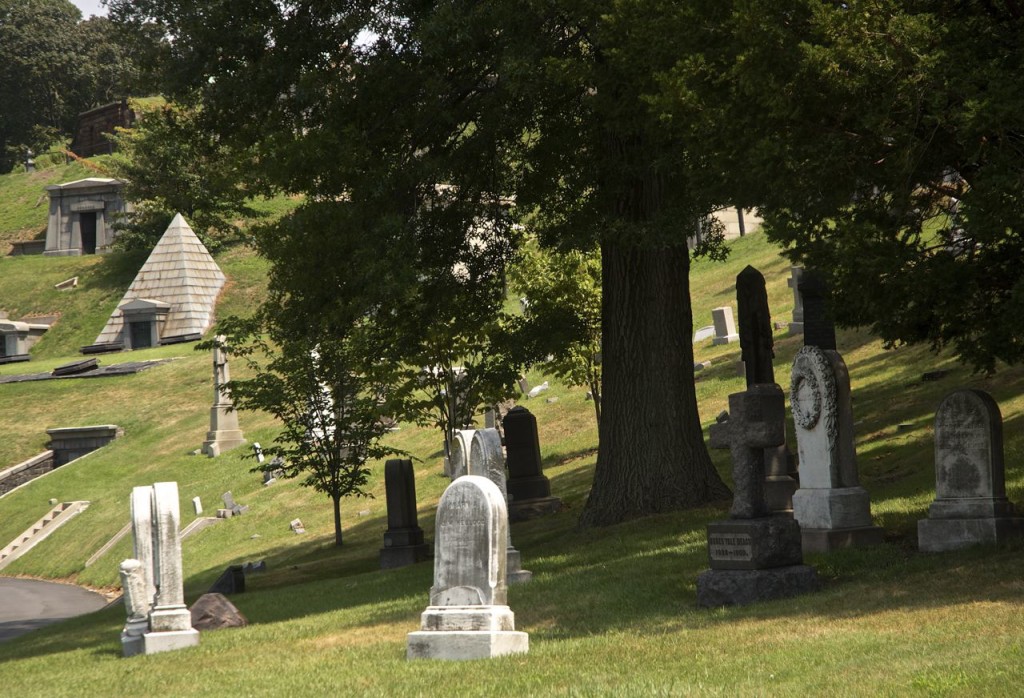 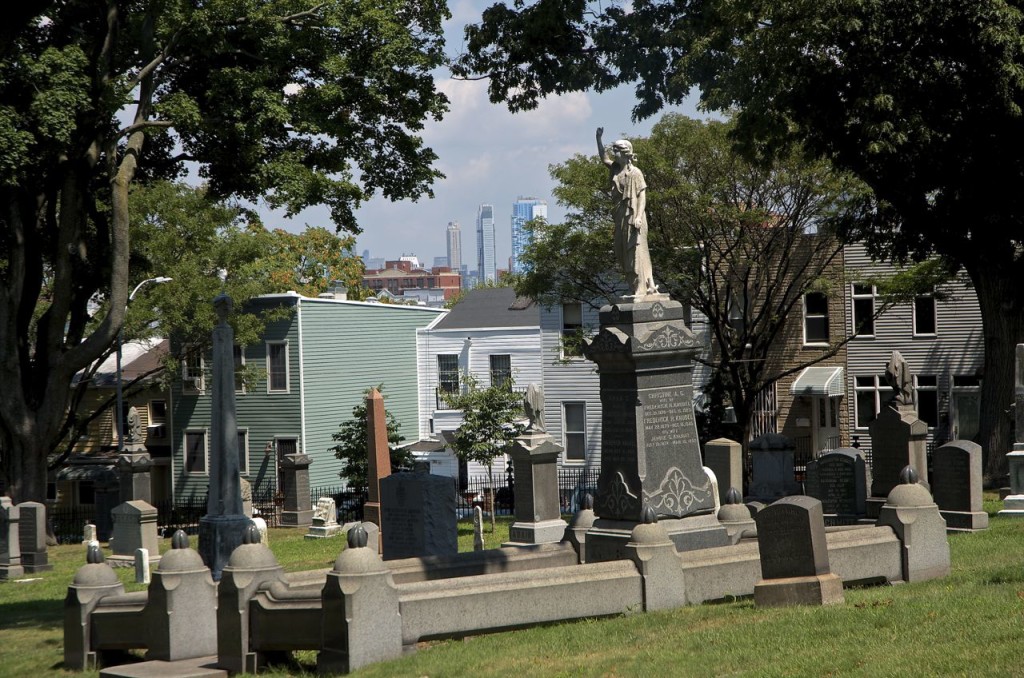 The Green-Wood Cemetery is on a slight incline, consequently the Manhattan skyline is visible from various vantage points. But in 1838, when this cemetery was founded, the area surrounding the graves sites and family monuments would have been situated in a very pastoral setting, with views of rolling hills in the distance and a scanty glimpse of the Hudson River. Now monuments like that of the Knubel family that was erected in the late 1800s looks out onto the Manhattan skyline in the distance. Fredric Herman Knubel had been a Lutheran Clergyman from 1896 -1918, and then in 1918 he became the first President of the United Lutheran Church of America. In 1924 he was invited to present the opening comments to the 12th session of the Democratic National Convention. I wonder what he would have thought about this year’s Presidential election? 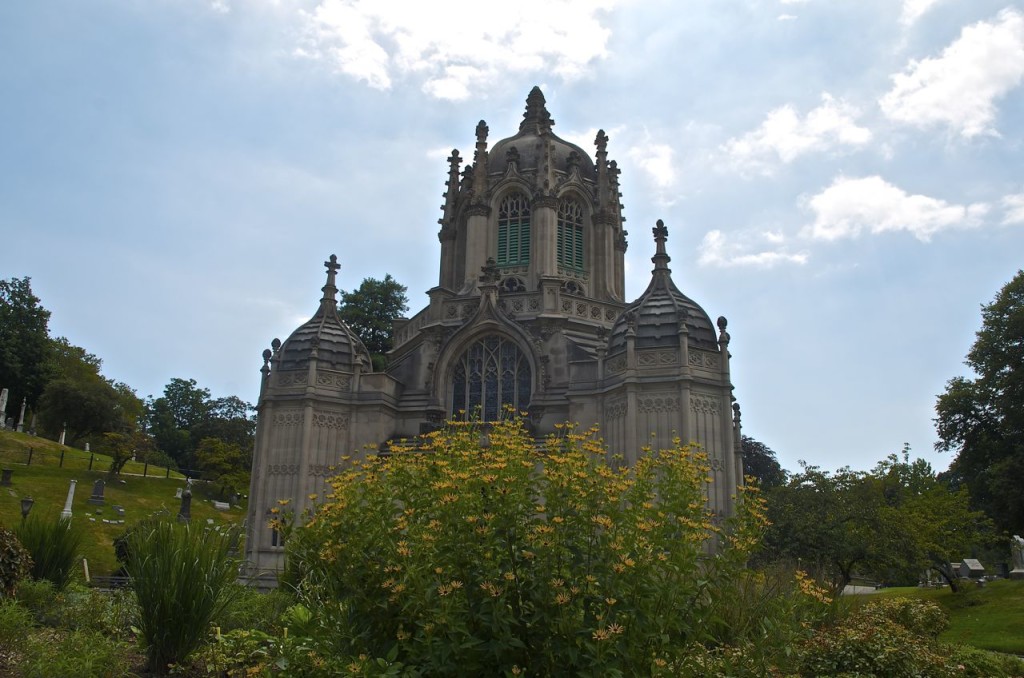 We visit the Chapel situated not far from the cemetery’s gatehouse, a lovely bit of architecture and wonderfully air-conditioned. It was certainly a welcomed respite on this hot summer day. We stood outside to admire the building and saw a couple of monk parakeets quickly flying from one tree to the other. 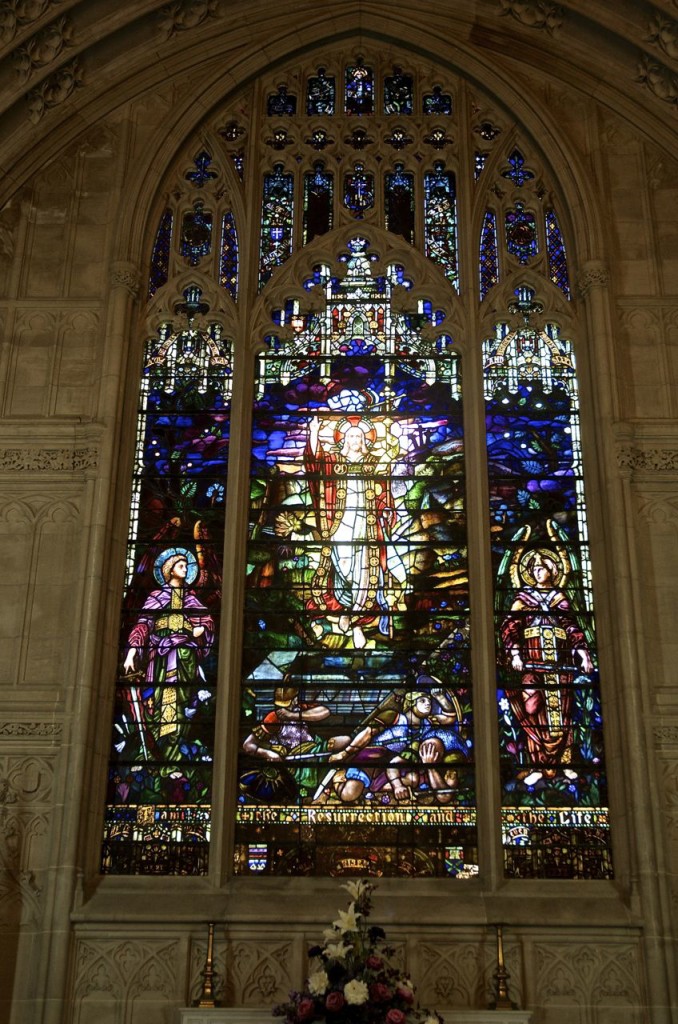 The first thing we saw when opening the door was the stained glass “Resurrection” window. The chapel has seating for at least 75 people. The afternoon sunshine streaming in through the deeply tinted purple glass gave the chapel a somber sensibility. 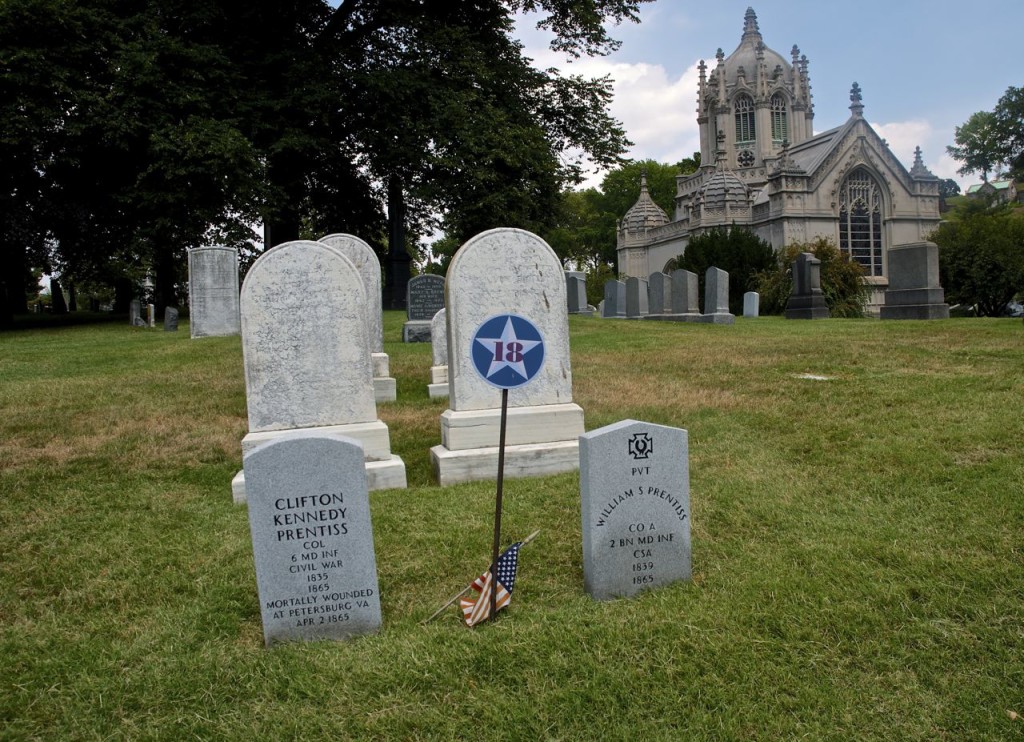 This Brooklyn cemetery has been working with the Veteran’s Administration to locate and install markers for War Veterans. The aim is to locate any veteran who’s headstone has either rotted over the years or who now lays in the ground without any marker at all. Within the last fifteen years the Green-Wood’s Civil War Project has been established. The Project has identified more than 4,800 Civil War Veterans interred at Green-Wood Cemetery. Many were either buried without a headstone or their marker had long ago rotted. Extensive research has been done on these veterans and 2,000 gravestones have been secured for those who have lain for many years in unmarked graves.

The above graves stones are of two brothers who fought in the Civil War, one from the south, one from the north. They were wounded in the same battle. On April 2, 1865 William Prentiss was entrenched with Confederate forces south of Petersburg, Virginia. They had been there for almost a year.  Major Clifton Prentiss, William’s older brother, was ordered to attack the area and was the first officer to lead his regiment into the enemy’s defensive works. During the battle William was shot in the leg, requiring an amputation, Clifton was shot in the chest.

Walt Whitman, worked as a volunteer nurse during the Civil War. The Prentiss brothers were sent to the hospital where Whitman worked and he visited the brothers who were in adjoining rooms. Whitman, in his estimation tended to 100,000 sick or wounded soldiers during the three years he volunteered. He wrote fifty stories about the veterans that he encountered during that time. One of the stories was about the Prentiss brothers.

William Printiss died June 24, 1865. Clifton Printiss died August 18, 1865. The brothers were buried next to each other and have lain side by side, for more than a century at Green-Wood Cemetery.

August 28th of 2016 Green-Wood Cemetery will host the 240th Commemoration Battle of Brooklyn of the American Revolution. There will be trolley tours, parades, cannon fire, horse rides and battle re-enactments and demonstrations of historical cooking.

Though I never did get a good photo of the monk parakeets, there was no end to the amazing stories that we happened upon at the Green-Wood Cemetery. We did glimpse a few parakeets gliding from one tree to another avoiding the watchful eyes of patrolling hawks and other predators. I’ll just have to come back another day. Maybe they’ll be a bit more cooperative when the weather is cooler.

← IN THE MIDDLE OF SUMMER
AN APOLOGY TO MY READERS!! →

16 comments for “THE GREEN-WOOD CEMETERY”