Sintra is a little more than a half hour train ride outside of downtown Lisbon though it is considered part of the city. It is a hilly area with three enormous medieval castles still standing and magnificent gardens. We arrived at the train station just in time to miss our train to Sintra, but caught another one about twenty minutes later. 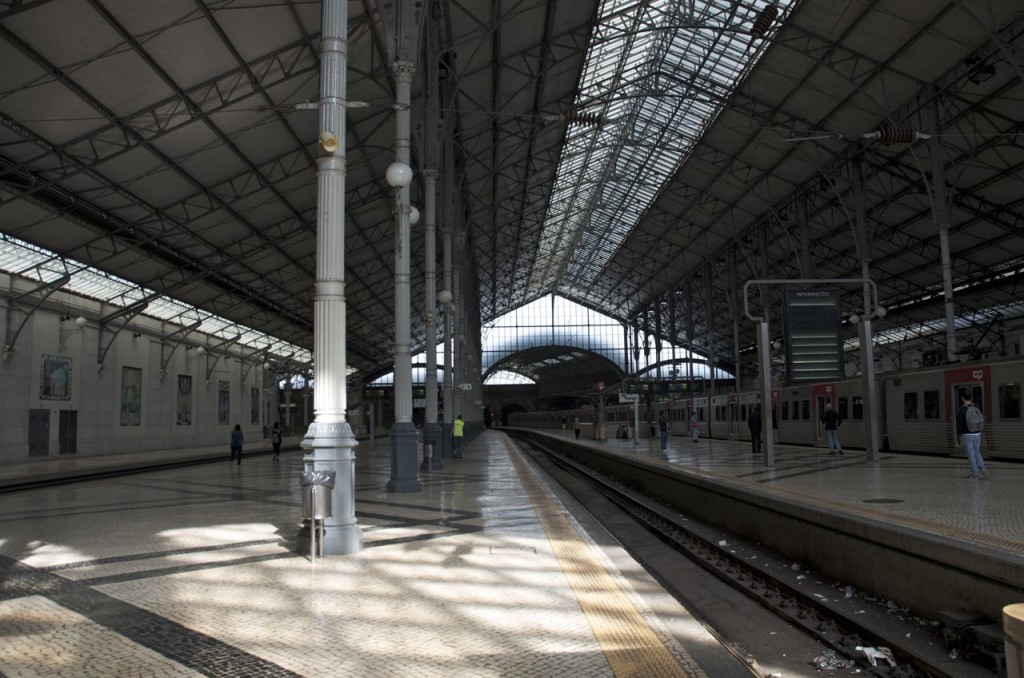 Once we arrived in Sintra we boarded a bus that took us up the hill to the castles. We got off at the first stop and walked around for a while to orient ourselves. Instead of going to the first castle we decided to walk to Quinta da Regaleira, an amazing magical and elegant garden and onetime summer residence of the Carvaljo Monteiro family. 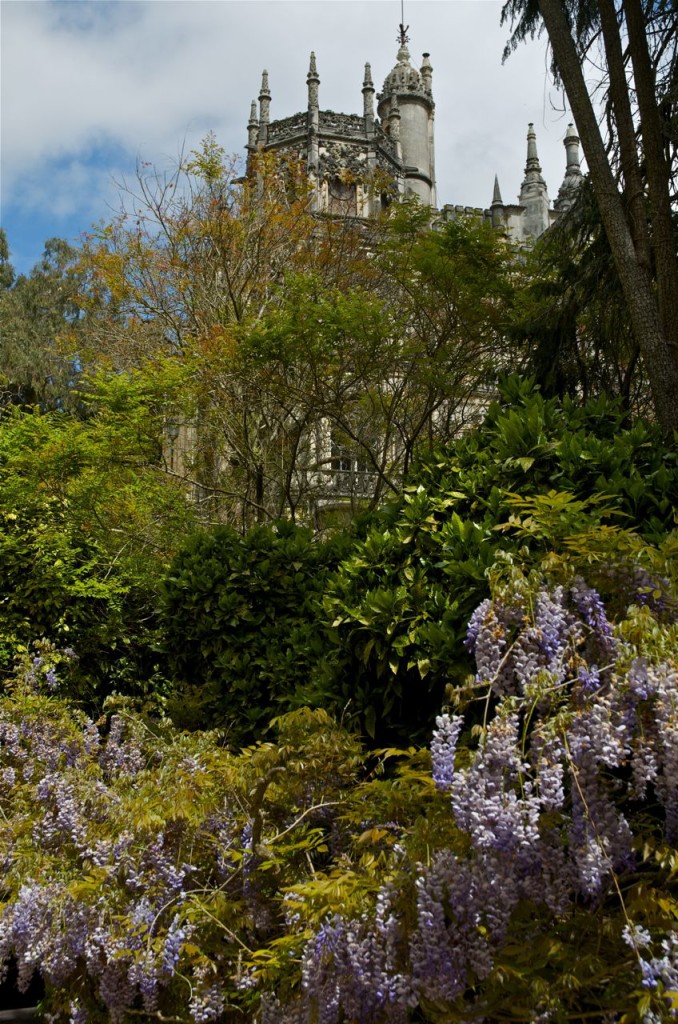 This was our first glimpse of the residence. Flowers were in bloom everywhere and huge exotic palms, giant cyprus and fragrant eucalyptus trees jutted up into the sky. Clouds floated back and forth across the brilliant Portuguese sun periodically casting deep moody shadows onto the gardens. 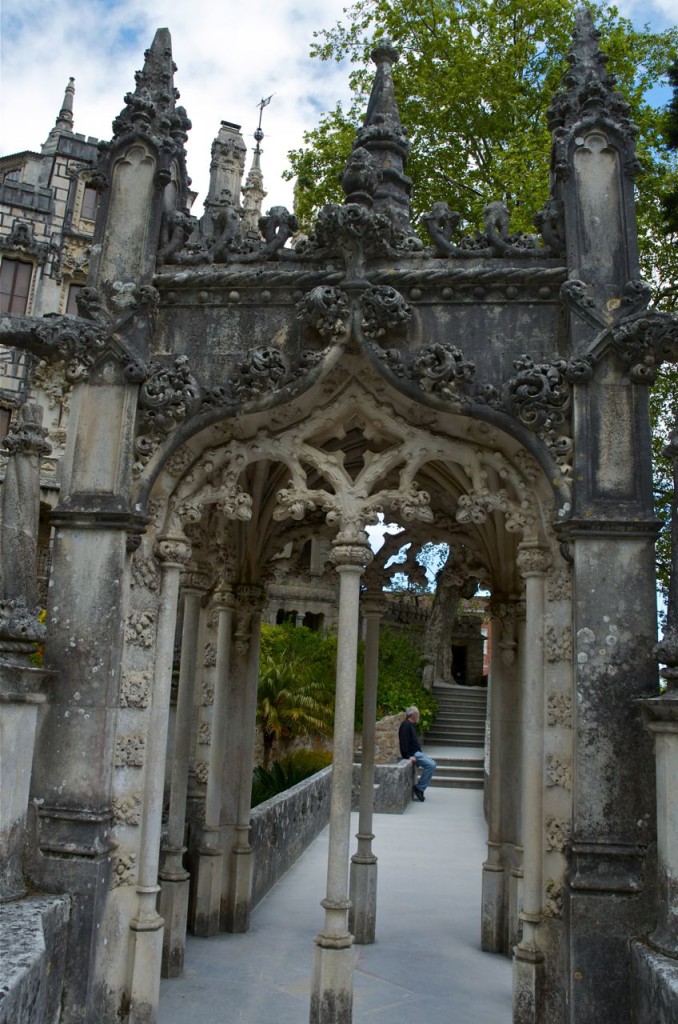 Every area of the grounds is dotted with elaborately decorated and fanciful chapels, grottos, towers, waterfalls, courtyards and lovely walkways like this one that leads to the entrance of the main house. 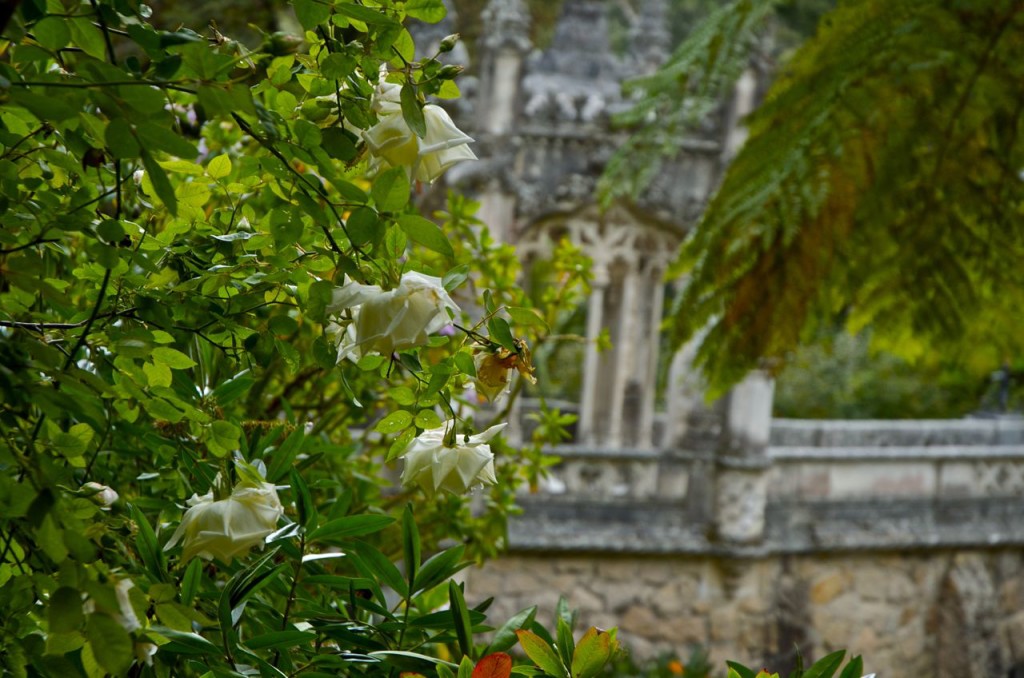 Through the years this property changed hands many times, and then in 1840 it was bought by the Baroness De Regaleira and she and her husband transformed this estate into an elegant summer retreat. 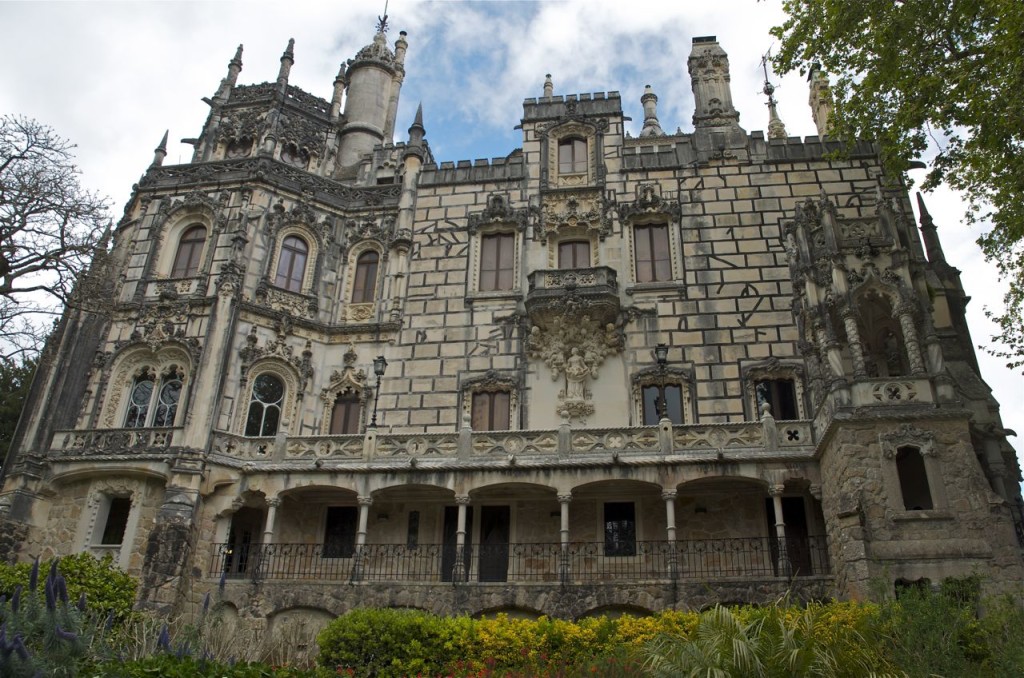 The property changed hands a couple more times before it was purchased in 1987 by the Japanese Aoki Corporation. At that point it was no longer used as a residence and was closed to the public. 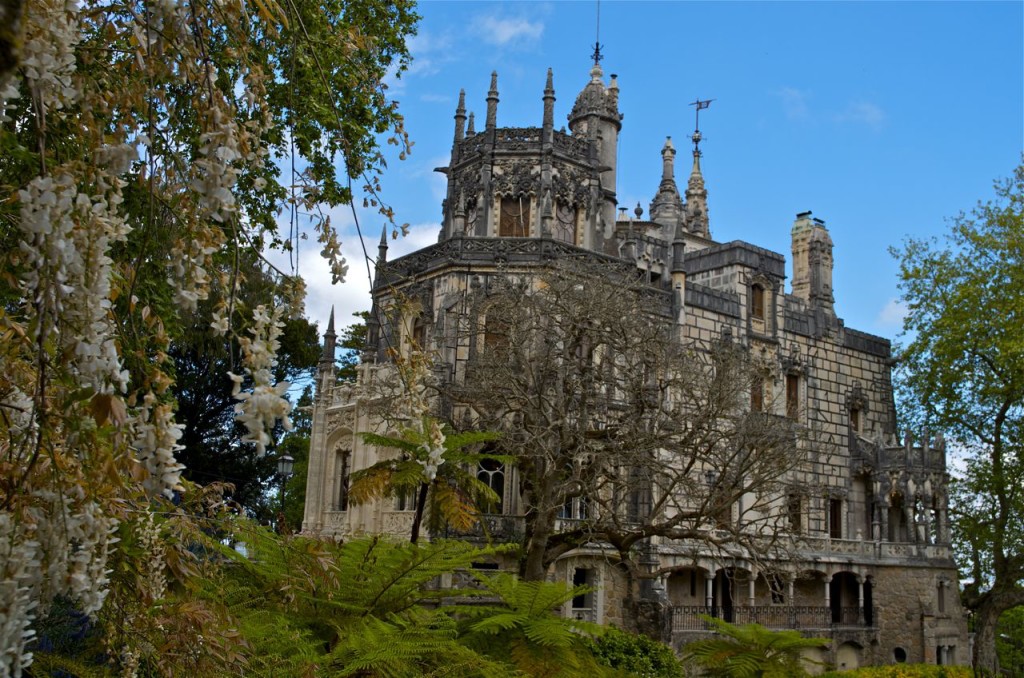 In 1997 this lovely garden, though by now in need of a great deal of repair, was acquired by the Sintra Town Hall and in 1998 was opened to the public. 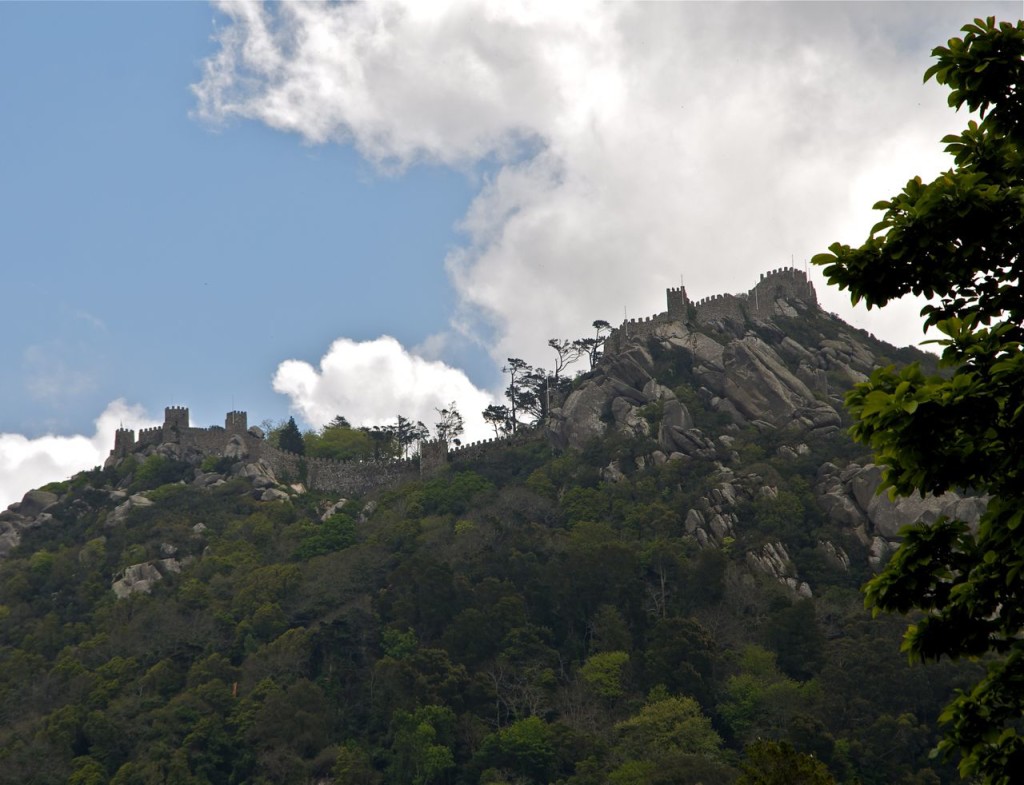 From the grounds of Palacio e Quinta da Regaleira you can see the stone walls of the Castelo Dos Mouros, a fortress built by the Muslims in the 9th Century. We did not have time to see this place, but it stands pretty much as it did back in the medieval time with the exception of some damage that was done during the 1755 earth quake that devastated Lisbon and the surrounding area. 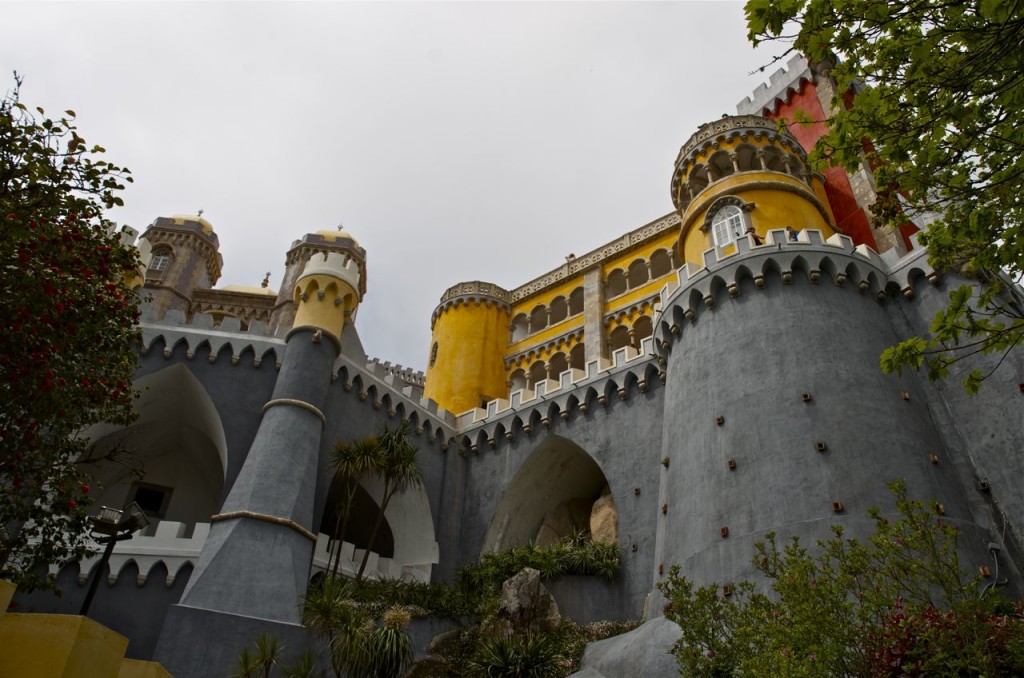 We took a bus instead to see Palacio da Pena, a castle that stands at the very top of the hill and is considered a major expression of 19th-century Romanticism. This palace is also a UNESCO World Heritage Site. Initially there was only a chapel on this site that was dedicated to Our Lady of Pena. According to tradition, construction of the chapel began only siting of an apparition of the Virgin Mary.

For centuries Pena was a small, quiet place for meditation, housing a maximum of eighteen monks. 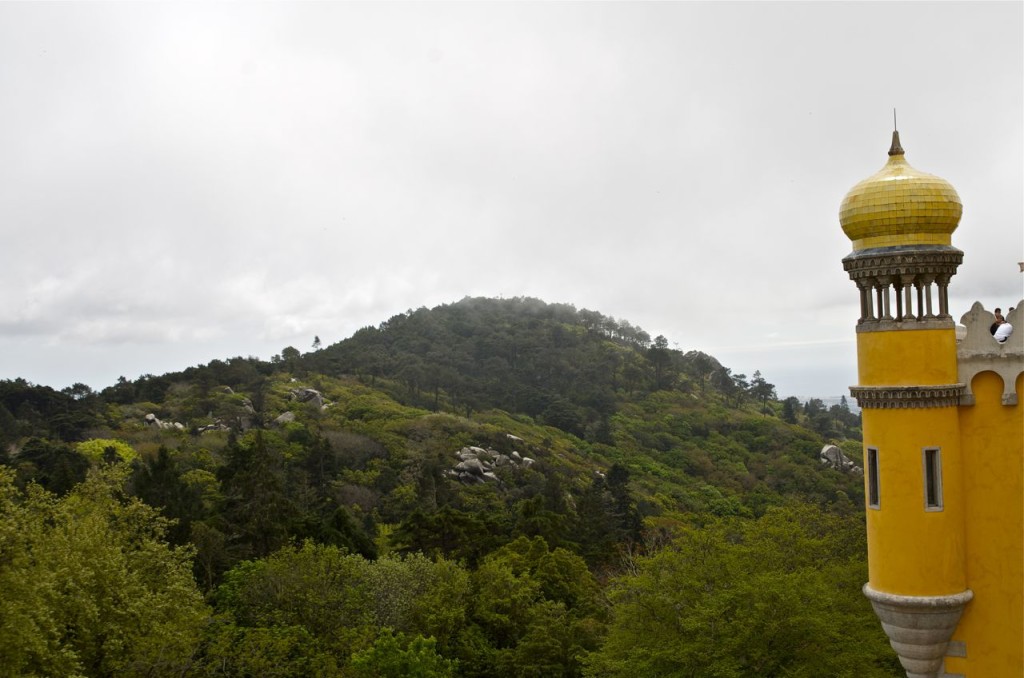 In the 18th century the monastery was severely damaged by lightning. However, it was the Great Lisbon Earthquake of 1755, occurring shortly after the fire, that took the heaviest toll on the monastery, reducing it to ruins.

For many decades the chapel was nothing more that a pile of rubble and remained untouched. But the area astonished young prince Ferdinand. In 1838, as King consort Ferdinand II, he acquired the old monastery, all of the surrounding lands, the nearby Castle of the Moors and a few other estates in the area. King Ferdinand II then set out to transform the remains of the monastery into a palace that would serve as a summer residence for the Portuguese royal family. 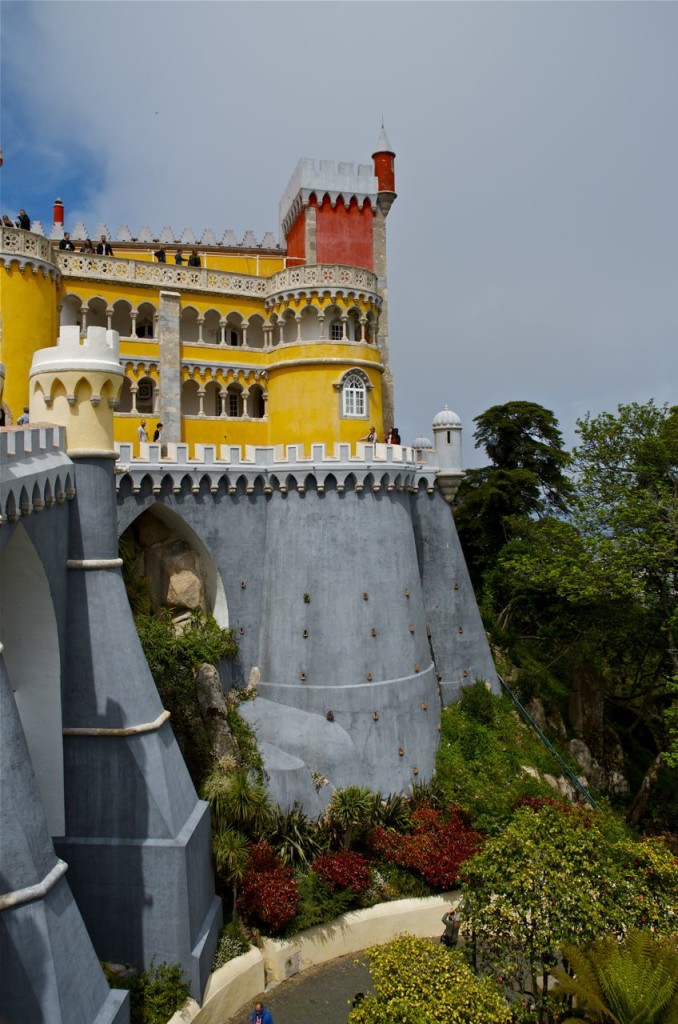 The construction took place between 1842–1854. In 1889 it was purchased by the Portuguese State, and after the Republican Revolution of 1910 it was classified as a national monument and transformed into a museum. The last queen of Portugal, Queen Amélia, spent her last night at the palace before leaving the country in exile in 1910. 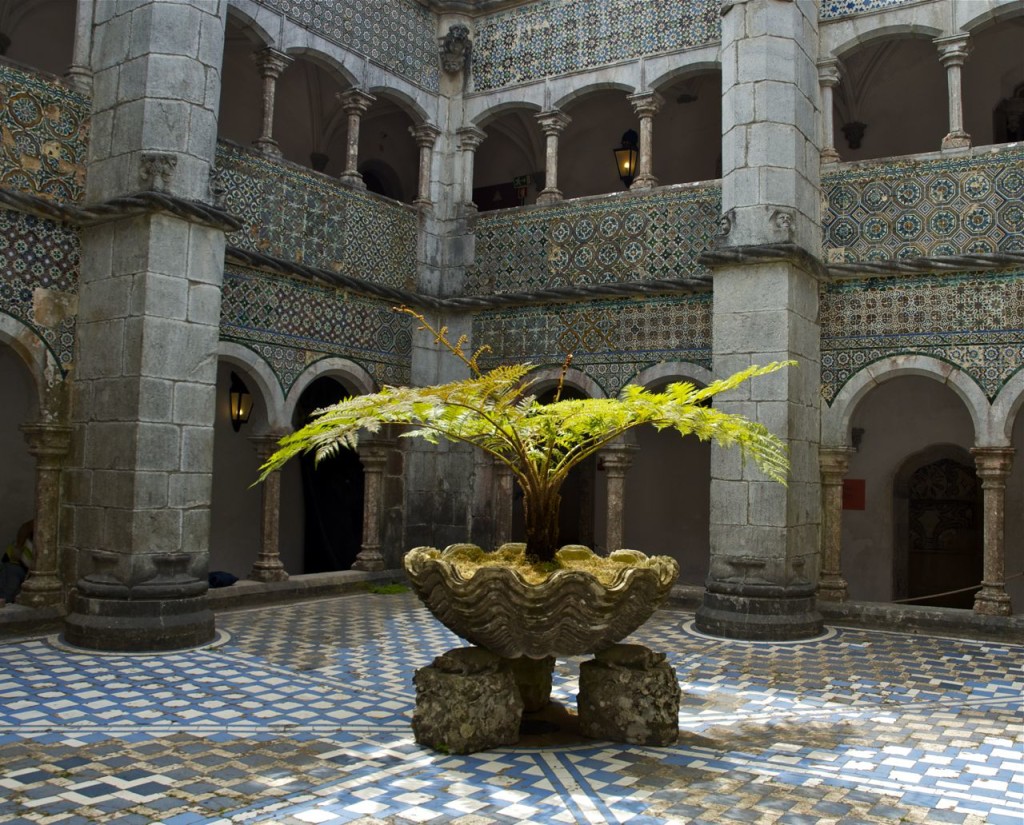 The palace quickly drew visitors when it was opened to the public and became one of Portugal’s most visited monuments. Over time the colors of the red and yellow façades faded, and for many years the palace was visually identified as being entirely gray. By the end of the 20th century the palace was repainted and the original colors restored. 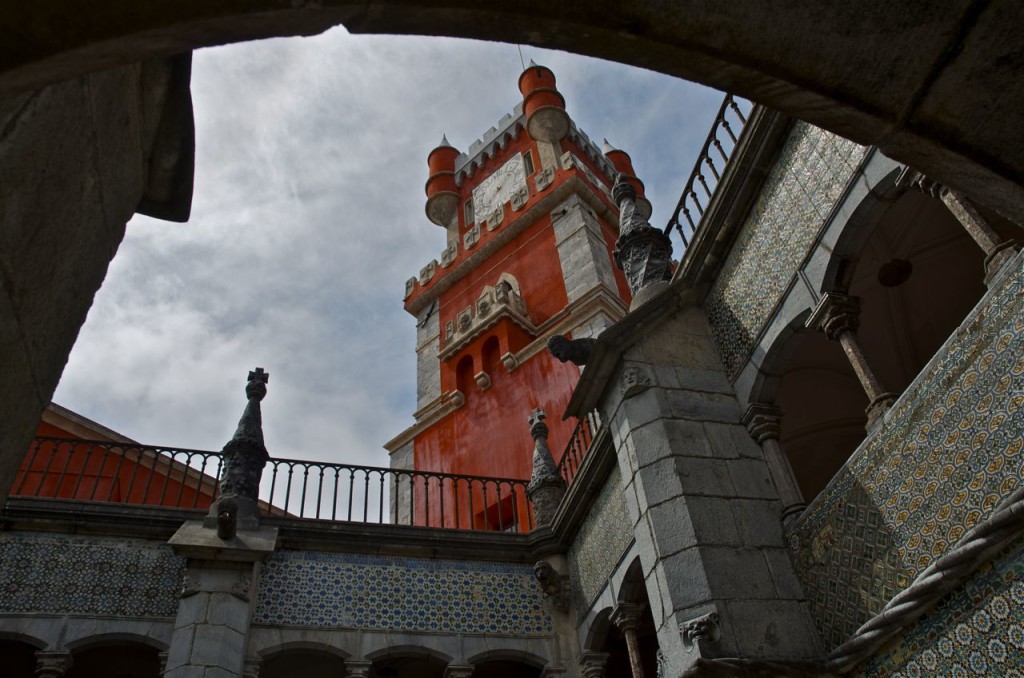 In 1995, the palace and the rest of the Cultural Landscape of Sintra were classified as a World Heritage Site by UNESCO. 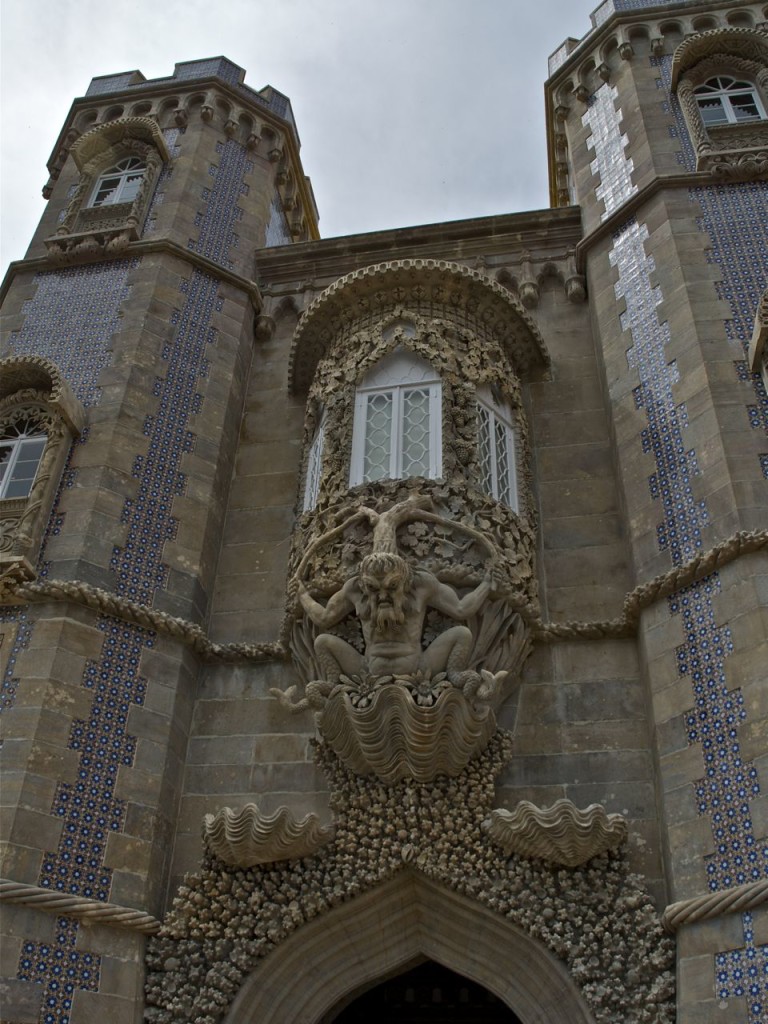 The depiction of a newt, symbolizing the allegory of creation of the world, sits atop the entrance way to the Palace da Pena. 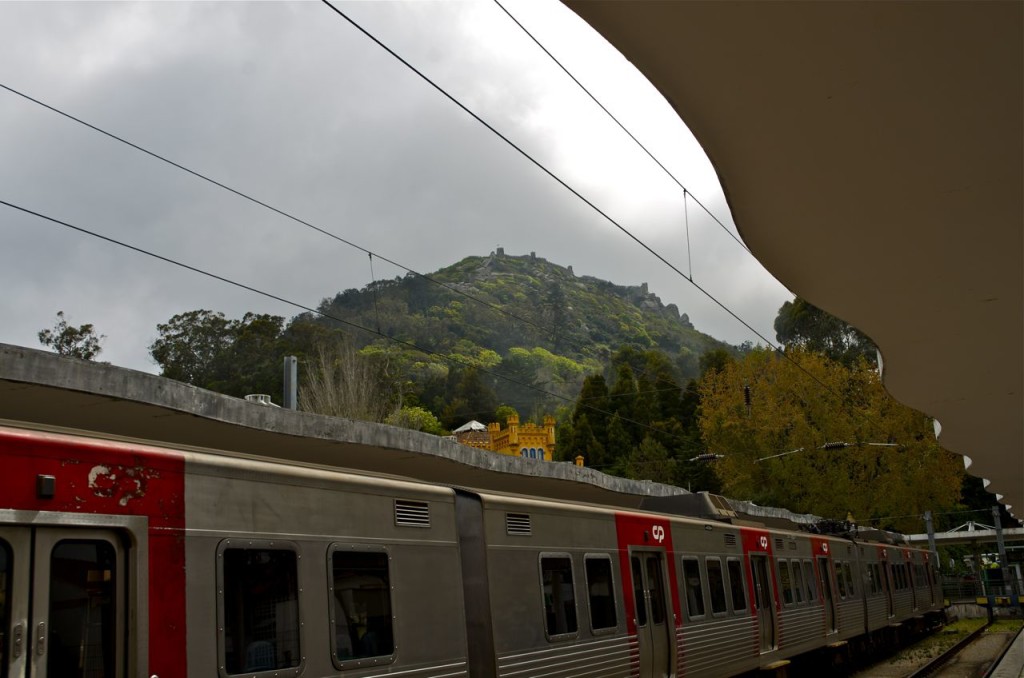 The visit to Sintra was over. We’d walked and walked and explored as much as we possibly could. But then as in many vacations there is always something else to see and just before boarding the train to head back to Lisbon proper, I looked up at the fortress that the Moors built so many centuries ago. I’m sorry that we did not have the time or energy to walk those grounds. Perhaps another visit to Lisbon is in our future.

6 comments for “A TRAIN RIDE TO SINTRA”