The other day I had coffee with a dear friend, Thelma. She lives on the east side of Central Park and I live on the west side. So usually when we meet at our favorite coffee shop on the east side, I walk through the park. It was a fantastic day, unseasonably warm for a winter’s day, the sky ultra-blue with a slight dusting of brilliant white clouds.

Thelma is also a writer and we mostly talk about plotting, character development, but then sometimes throwing in bits and pieces of personal issues. This time we discussed at some length the concept of ‘a writer’s platform’. The coffee is always yummy, but when we’ve sat and chatted for a couple of hours, our empty cups in front of us, we parted and went our separate ways. 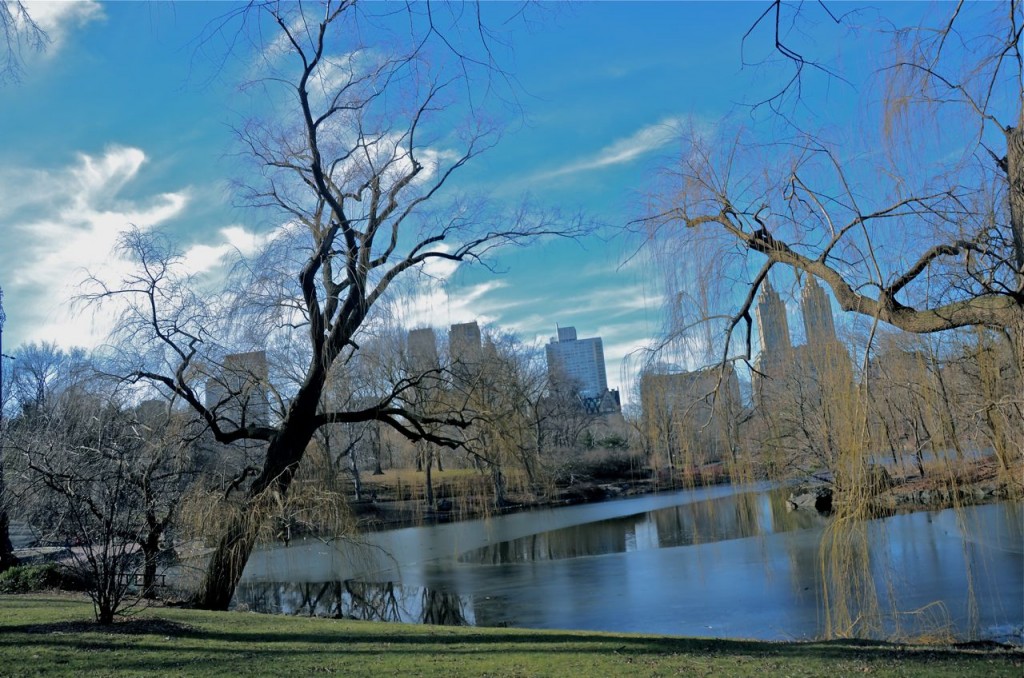 VIEW OF ‘THE LAKE’

Earlier that day I’d decided to take the long way home, walking in the pedestrian lane of the paved street that circles the inside of the park. I’ve never done this before so I’d consulted the park map that morning to figure out the route. I had a destination. I wanted to visit the Bethesda Fountain.

The Bethesda Fountain, one of the largest fountains in NYC, sits in the middle of a plaza on the edge of  THE  LAKE and is a short walk from Loeb Boathouse eatery and bar. Every section of Central Park is so wonderfully pleasant and I hope that I never get so jaded that over time I take these beautiful locations for granted. 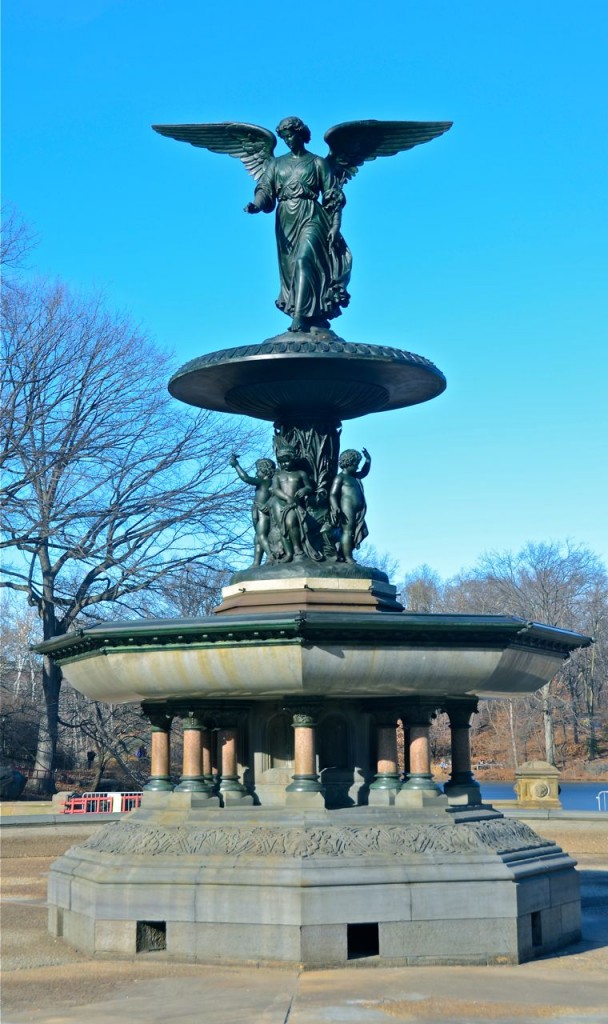 The fountain, designed by Emma Stebbins, the first woman to receive a public commission for a major work of art in NYC, was unveiled in 1873, and this was the only sculpture commissioned as part of Central Park’s original design. Beneath the eight-foot tall female winged angle touching down on to the top of the fountain are four-foot tall cherubs representing Temperance, Purity, Health and Peace. The fountain was originally to be called ‘Angel of the Waters’ and was designed to commemorate the 1842 opening of the Croton Aqueduct, which supplied NYC with fresh water. At the dedication in 1873, the artist’s brochure quoted the Biblical verse from the Gospel of St. John 5:2-4: “Now there is at Jerusalem by the sheep market a pool, which is called Bethesda whoever then first after the troubling of the waters stepped in was made whole of whatsoever disease he had.” Soon after the dedication the fountain became known as Bethesda Fountain. 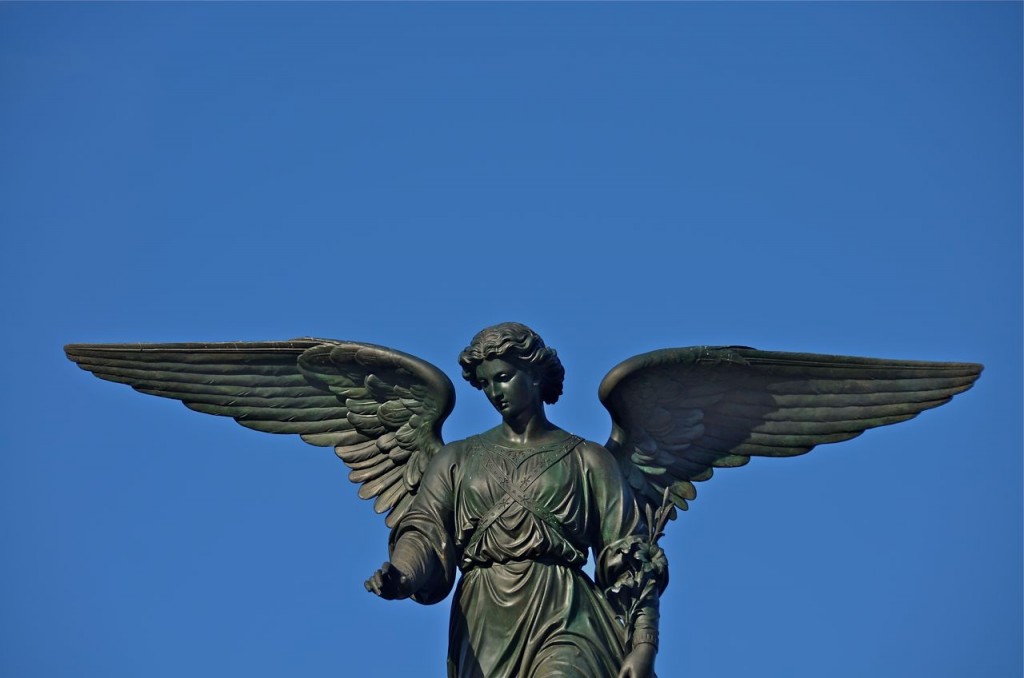 The eight-foot tall statue of the angel is exquisite with the lily, symbolizing purity, in one hand and the other hand outstretched delivering a blessing of the water pouring out from around her feet and into the fountain below. 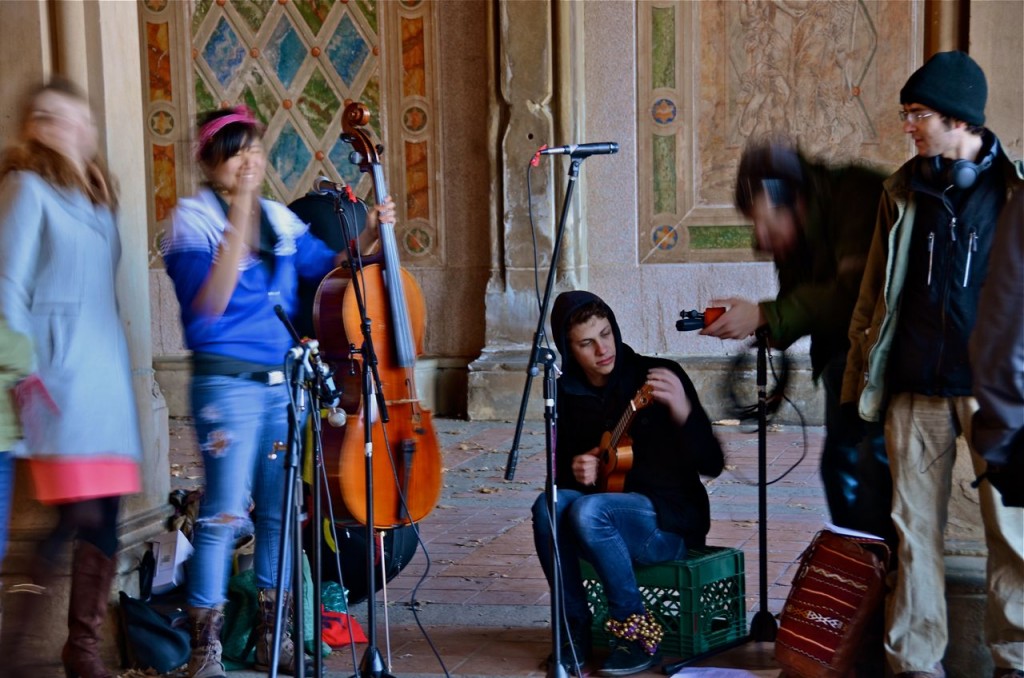 Musicians congregate in the arcade across from the fountain, playing and singing, taking advantage of the wonderful acoustics. 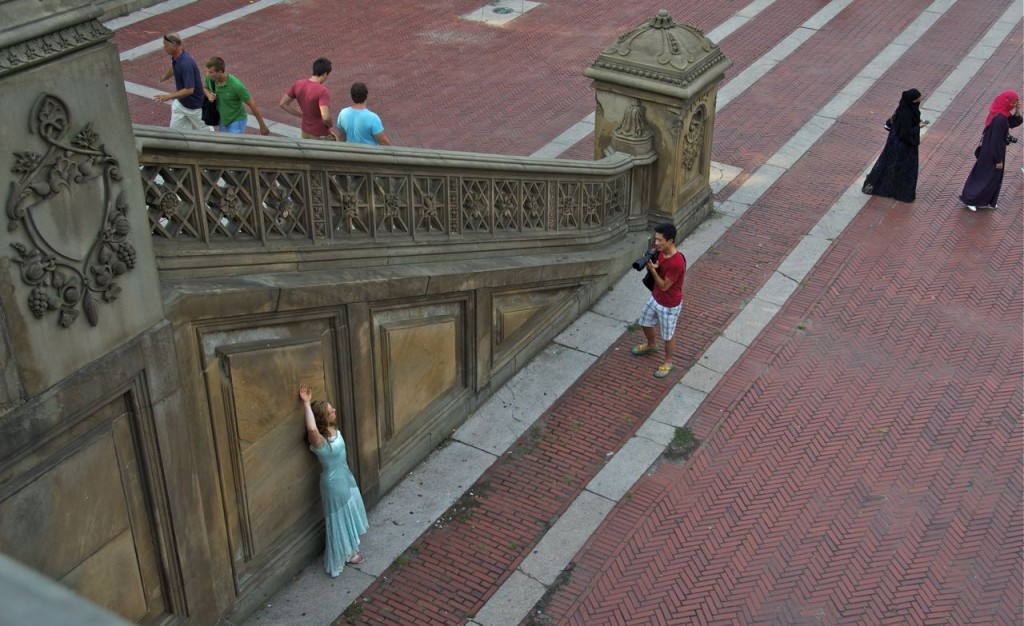 And the light is so lovely, the setting so compelling, photographers, both professional and amateur, frequently use this location for their photo shoots. 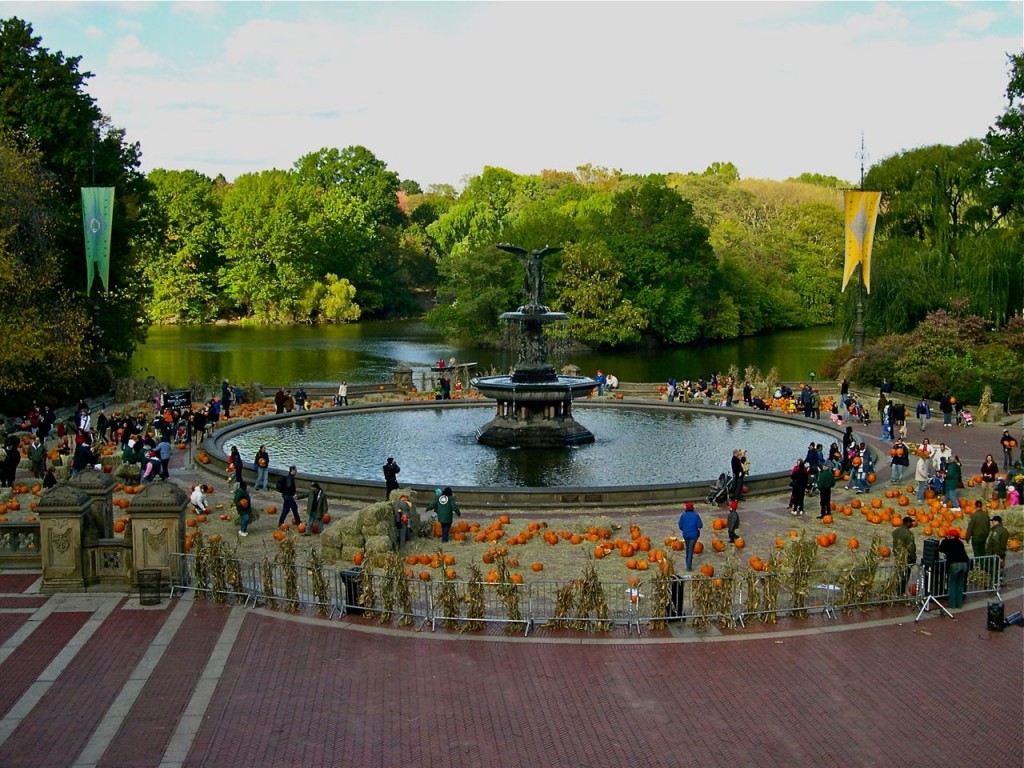 A couple years ago we happen to be walking in the park on a lovely autumn day, when we saw truck-loads of pumpkins and bales of hay scattered all around the fountain plaza. It was “Free Pumpkins For The Kids Day.” 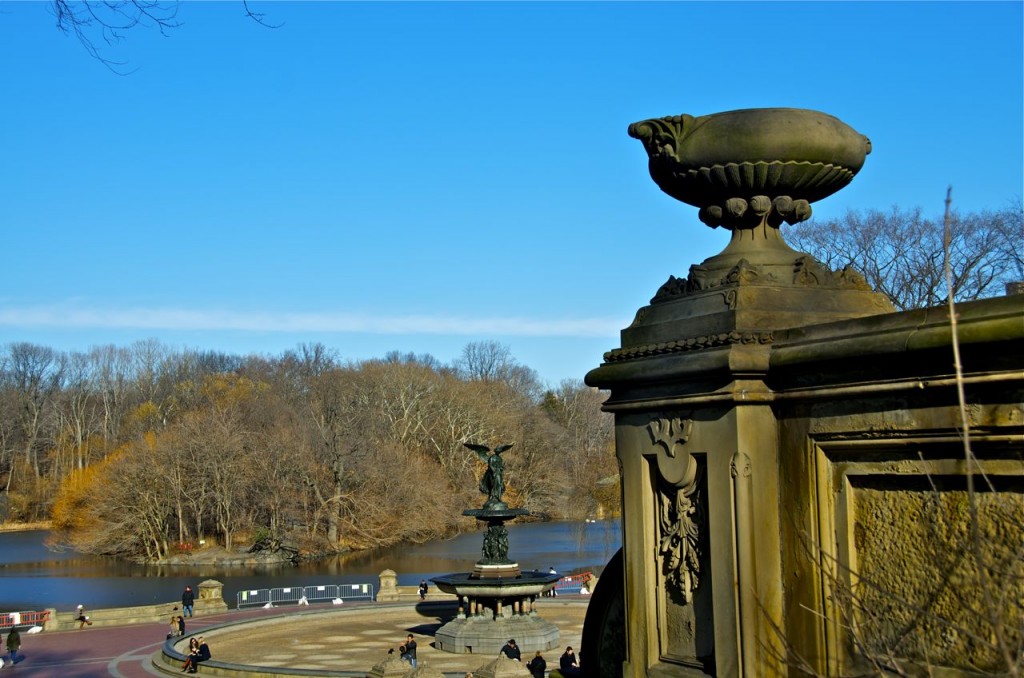 As I continued my walk home, the light turned golden and the shadows, deep and long, I looked back at the fountain from the upper terrace on the 72nd Street Cross Drive and stood there a little while longer drinking in the beauty and splendor of this lovely scene. 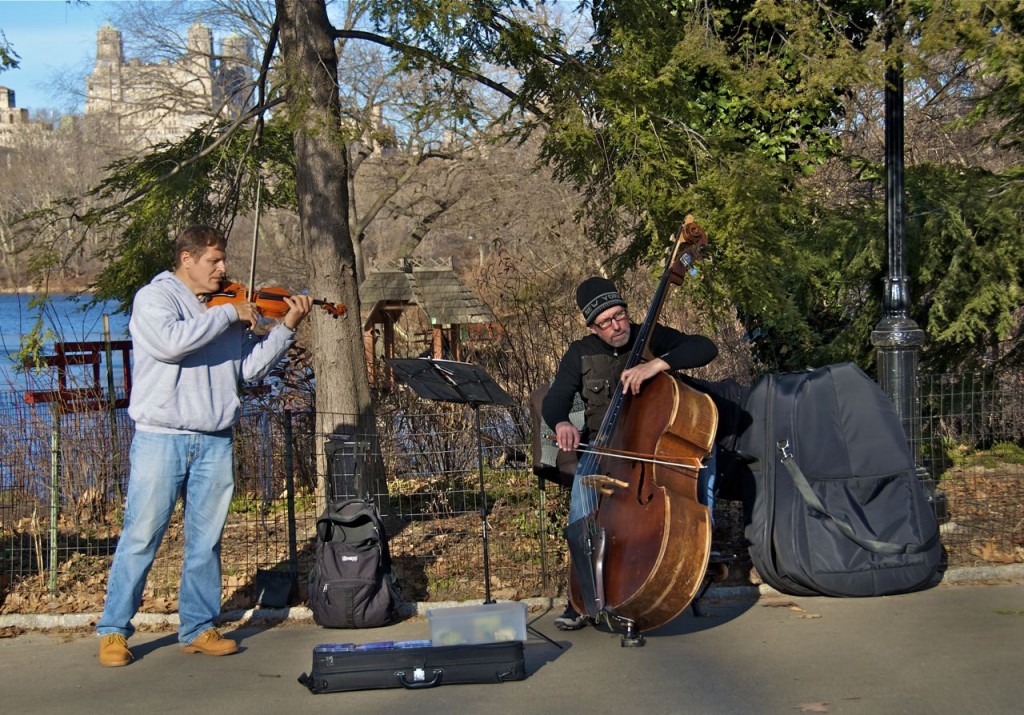 When I left and had only walked a short distance I heard beautiful classical music coming from nearby. A short distance from the Bethesda Terrace I saw two men performing along the walkway. The lovely melody, the brilliant late afternoon sunlight, the magnificent scenery, were nearly enough to make me weep.

9 comments for “ANGEL OF THE WATERS”