There always seems to be so much going on. Any way that’s what I say when I realize that large gaps of time have passed and I’ve lost touch with friends. But it’s a new year, not that I’m about to make a declaration of New Year resolutions, though I wonder if in the next year I might find a better way of keeping in contact with people. And then there is the interesting experience of reflecting on the past at this time of the year, and I realize just how quickly time does go. My father passed away more than 30 years ago and my mother’s been gone almost 10 years. Those are strange times to comprehend because in the interim we’ve gained a fantastic son-in-law and an adorable grandson, and I feel like they have always been in our lives.

I wondered if all beginnings might start with the New Year? So, this year we did something a bit out of the ordinary for the New Year. We decided to baby sit our grandson while his mom and dad hit the town, celebrating the incoming new year with dance and drink as a young couple without babysitting worries. Then grandpa and I  traveled around NYC with our grandson visiting friends, sharing toasts and nibbles. You should have seen the smile on our grandson’s face when someone set a large dish of jumbo shrimp on the coffee table in front of him. I could imagine him saying to himself, “Now, that’s what I call bringing in the New Year right?” 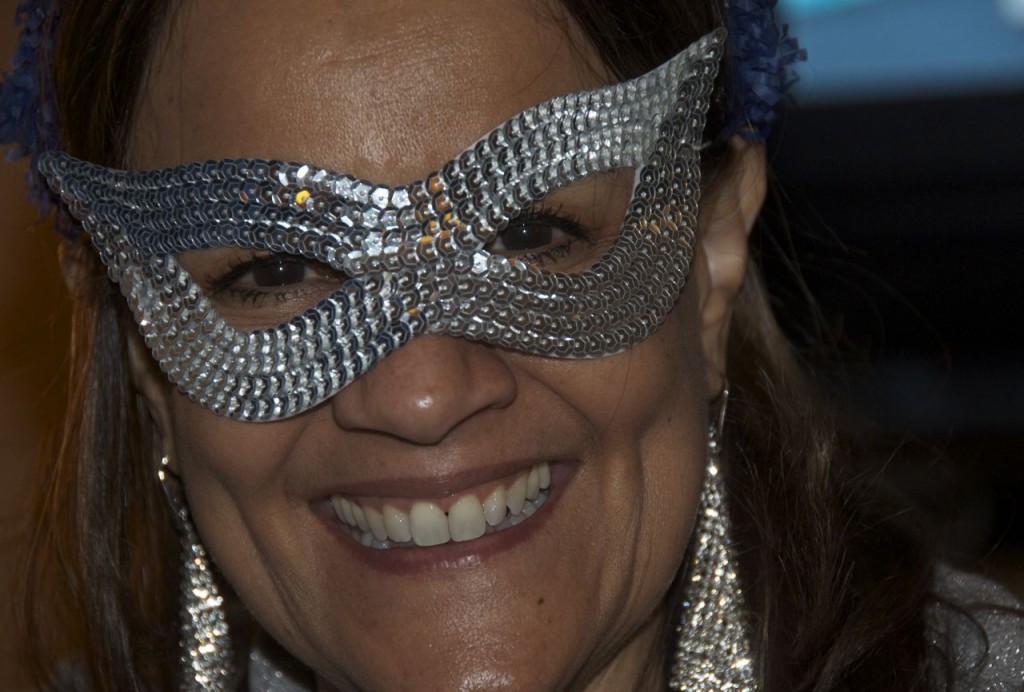 One of our friends knows how to dress for the end of the year celebration, in disguise, her version of a New York City Mardi Gras!! After she handed out apple juice and a noise maker to our grandson and glasses of Champaign for the adults we were ready to head for Central Park to watch the fireworks at midnight. 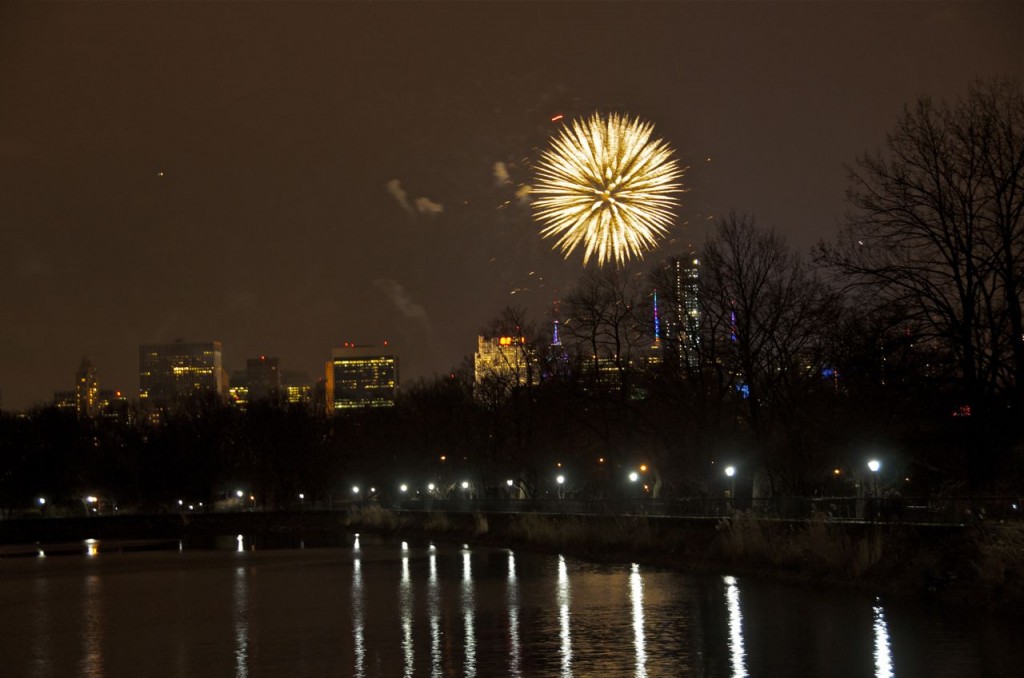 We stood on the edge of the Reservoir. The view was spectacular, and what a gloriously clear night for a display of the exploding colors above the city skyline!! 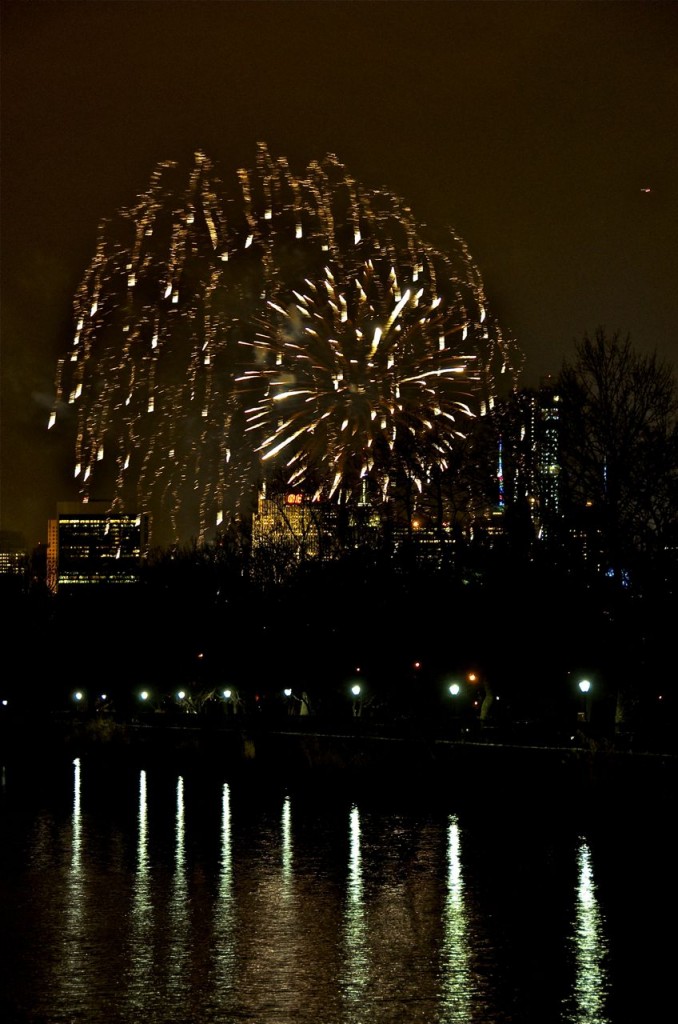 The show went on for quite a while, too. 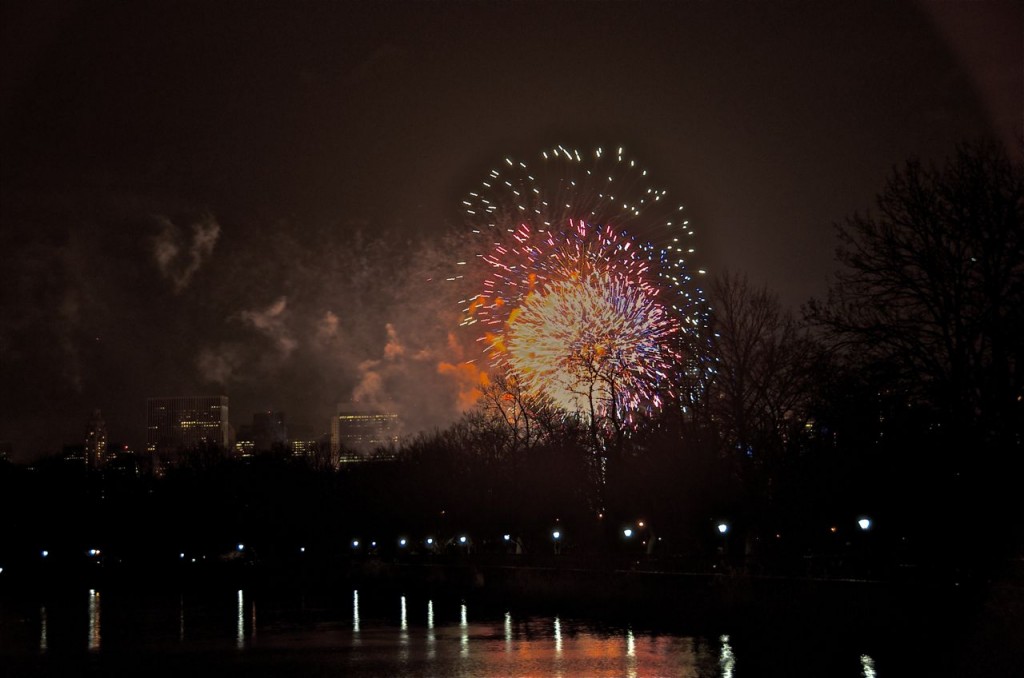 There were several explosions that looked like they might have been the finale, but then more fireworks erupted and there was applauding and comments about the beautiful display. Someone standing not too far from me got a phone call and tried to explain to the person on the other end of the line just how special it was to be in Central Park at midnight watching the city celebrating. 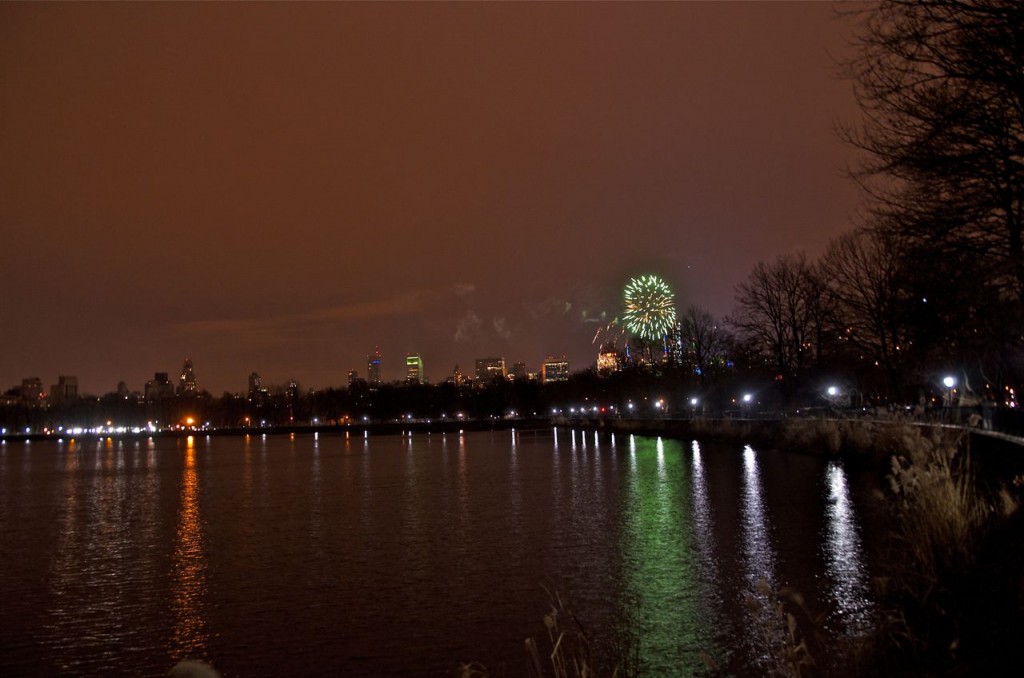 And then after the last explosion of color we hung around and watched the participants in the Central Park New Year’s Eve Midnight Run. Thousands of people participate in this run every year and it is really quite festive. Some people dress up. One guy, now mind you it’s winter in NYC, dressed down and was running in the briefest of a swim suit that you would ever see on a beach in the tropics. Every one was having a grand time, most runners smiling, while only a few were huffing and grunting. 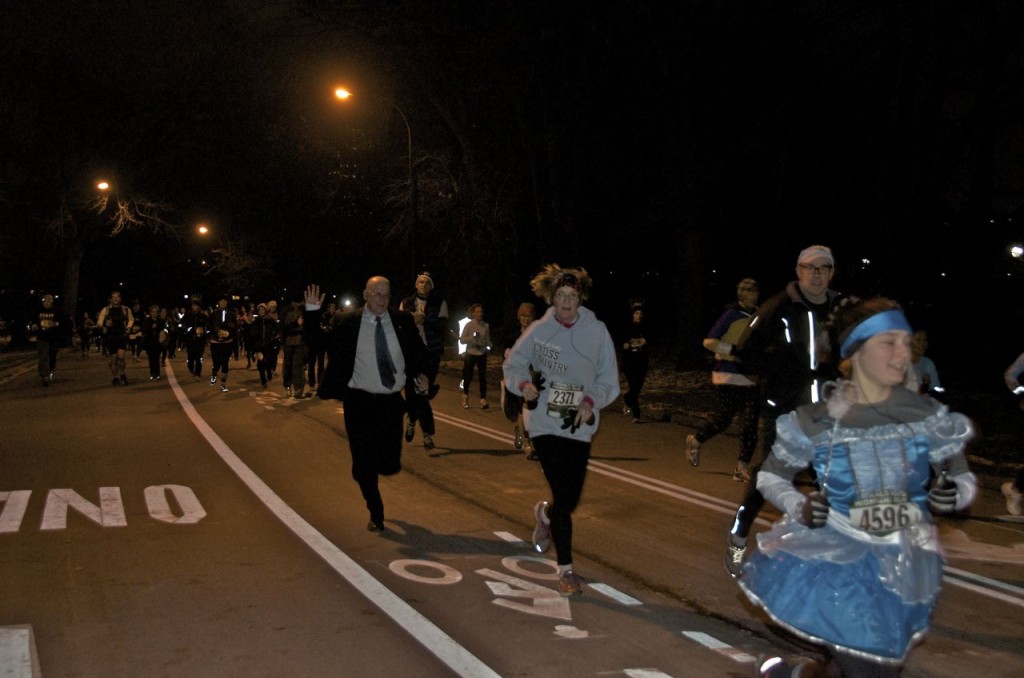 There were people wearing winter jogging outfits. We saw a smiling fairy princess quickly running, complete in her pretty blue dress and magic wand. One guy wearing suit and tie gave high 5’s to anyone who  reached out to him as he went whizzing by. 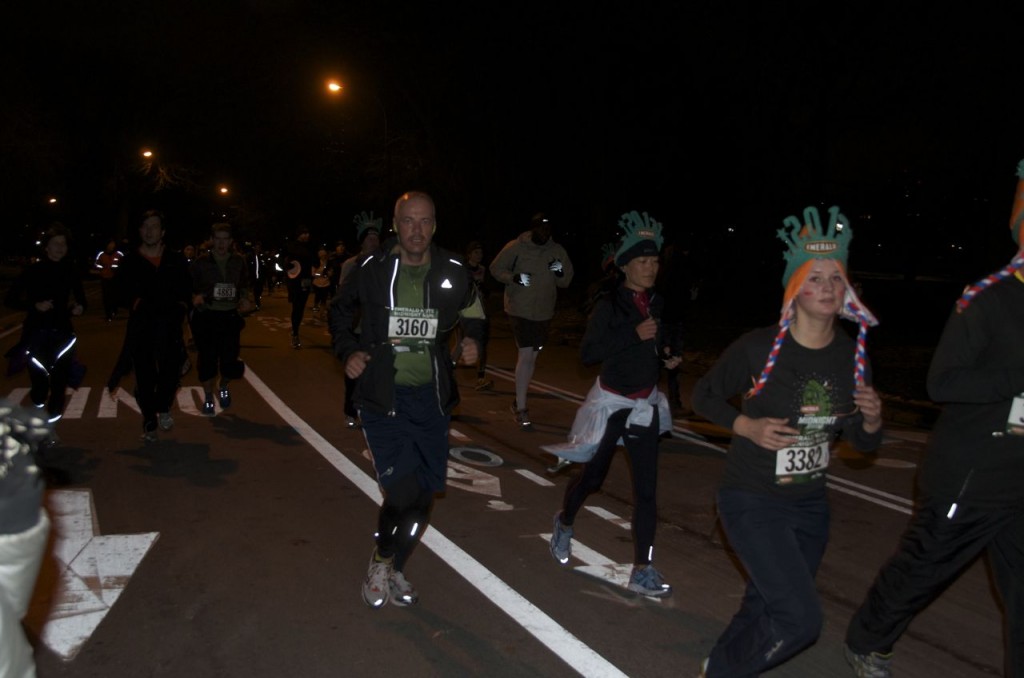 Ladies wearing red, white and blue pigtails quickly jogged along the runner path proudly displaying the New Year, 2013, on top of their heads. It was a fun night but we could not stand around for hours waiting on the sidelines, watching until the last runner brought an end to the race. We called out, “Happy New Year,” to the runners and walked back through the park, heading home.

We saw a few revelers in the park, standing in groups, passing bottles of Champaign and wine back and forth to each other. We heard one or two bottles crashing onto the walkways, but Central Park felt very safe and festive.

As we reached the street we watched as a pretty young woman in a party dress and very high platform heals get out of a taxi and once she stepped out onto the street she couldn’t stop spinning.

Our grandson asked, “What’s the matter with her?”

Our grandson stood for a minute watching the woman and then shrugged his shoulders and skipped up the sidewalk. 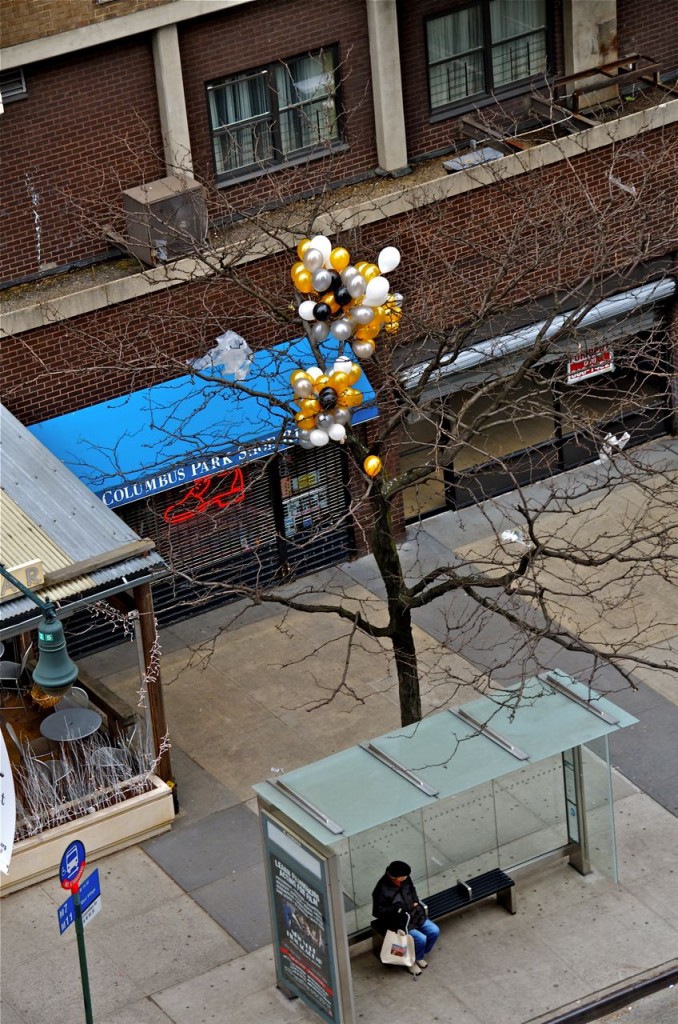 The next morning my husband noticed a big bunch of balloons stuck in a tree next to a bus stop. They were most likely the remnants of a party someone had last night. I suspect that they’ll be hanging there for quite some time and then we’ll have the black, gold and white rubber flapping in that tree until the string rots and it all falls to the ground.

But this was a great New Year’s Eve and both my husband and I know that it won’t be long before our grandson will be a teenager, and then he’ll head off to college, and we’ll be old, and he’ll be a young man, and we’ll look forward to his visits and talk about the time when he was a little boy and we went to Central Park to watch the fireworks standing on the edge of the Reservoir.

← WISHING EVERYONE A HEALTHY AND SAFE NEW YEAR!!
ANGEL OF THE WATERS →