Visiting Dead Horse Bay has been on my radar for quite some time. Finally a couple of days after the start of spring a few friends and I drove out to Far Rockaway in Brooklyn to check out the place. Though the walk to the beach was uneventful, the pathway through the woods that lead to the beach had a mysterious and deliciously lonely feel to it. It’s hard to believe that this used to be an island before a landfill project joined it to the rest of Brooklyn and that a thousand people used to live here. 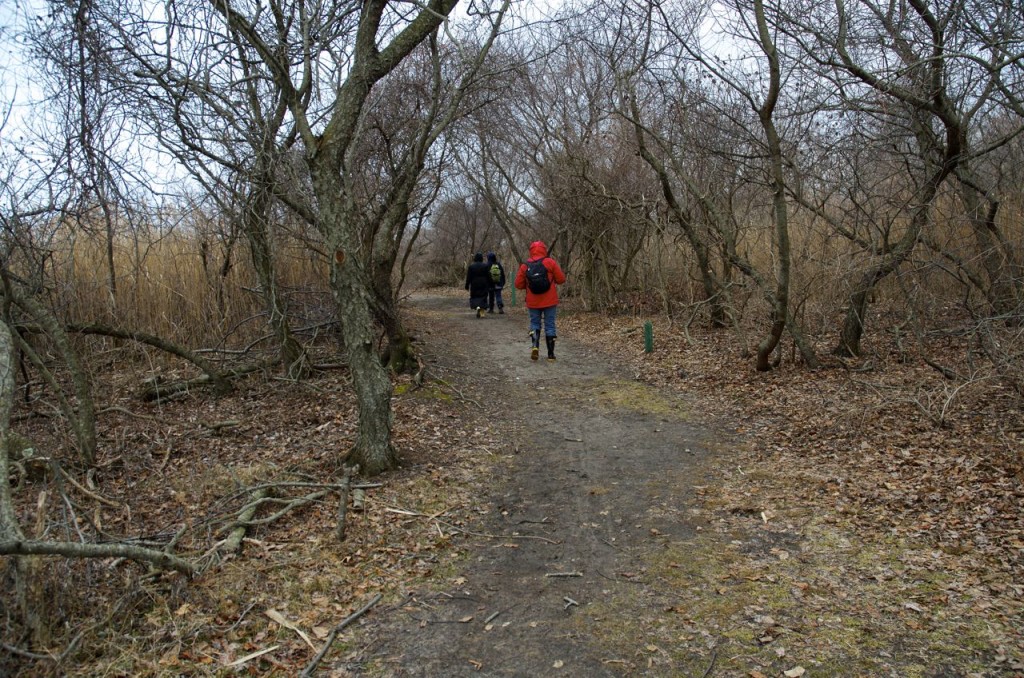 Tall weather-worn marsh grass loomed everywhere and the leafless trees, bent and twisted from the offshore winds, trembled in the early morning breeze. We had no idea what the weather would be like when we first began to plan this trip several weeks earlier. New York City certainly had its share of snow and cold weather this winter, and even though it was spring, sure enough it was snowing earlier in the morning when I headed uptown to meet my ride. Thankfully it was only a short lived flurry and the snow and drizzle stopped by the time we reached Dead Horse Bay. It wasn’t going to be a warm day and quite obviously we weren’t going to see sunshine leaking through the heavy overcast sky. 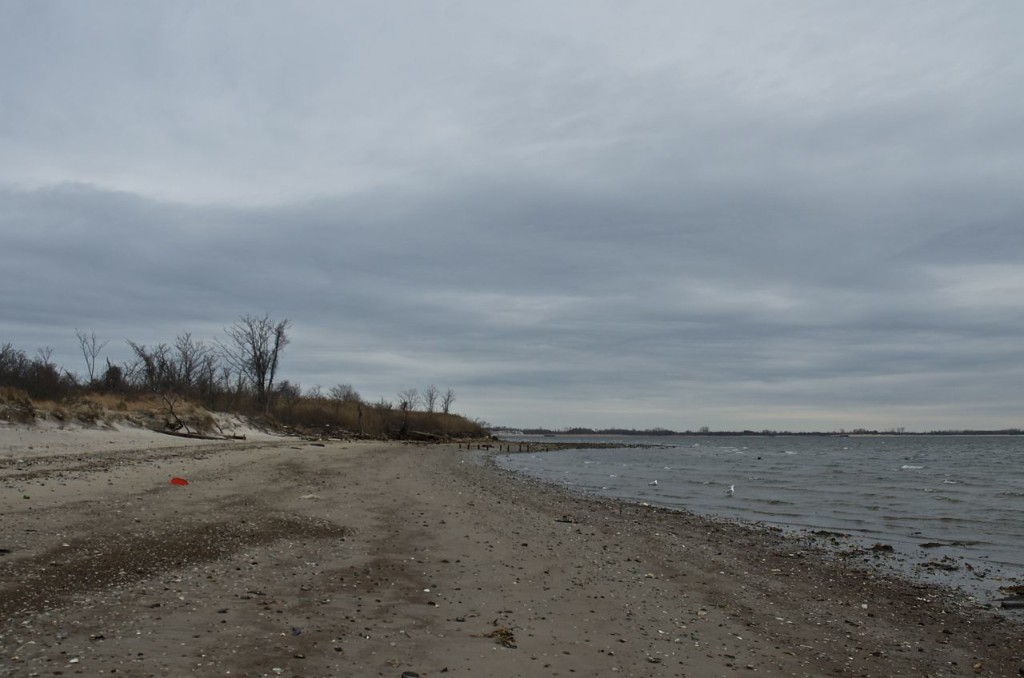 Over the last month we’d checked the tide chart several times. The last thing we wanted was to arrive at the bay on a high tide. It was an outgoing morning tide and that meant getting up and out early, which was certainly better than missing all the action.

Dead Horse Bay is a small body of water off Barren Island between the Garritsen Inlet and Rockaway Inlet along the ocean shore of Brooklyn, NY. It has a long history of use that dates back to the seventeenth century. The area was first used by the Dutch settlers who utilized the waters to operate tide mills to grind wheat into flour. It’s not a large body of water with the Atlantic ocean just on the other side of a spit of land that encloses the bay. 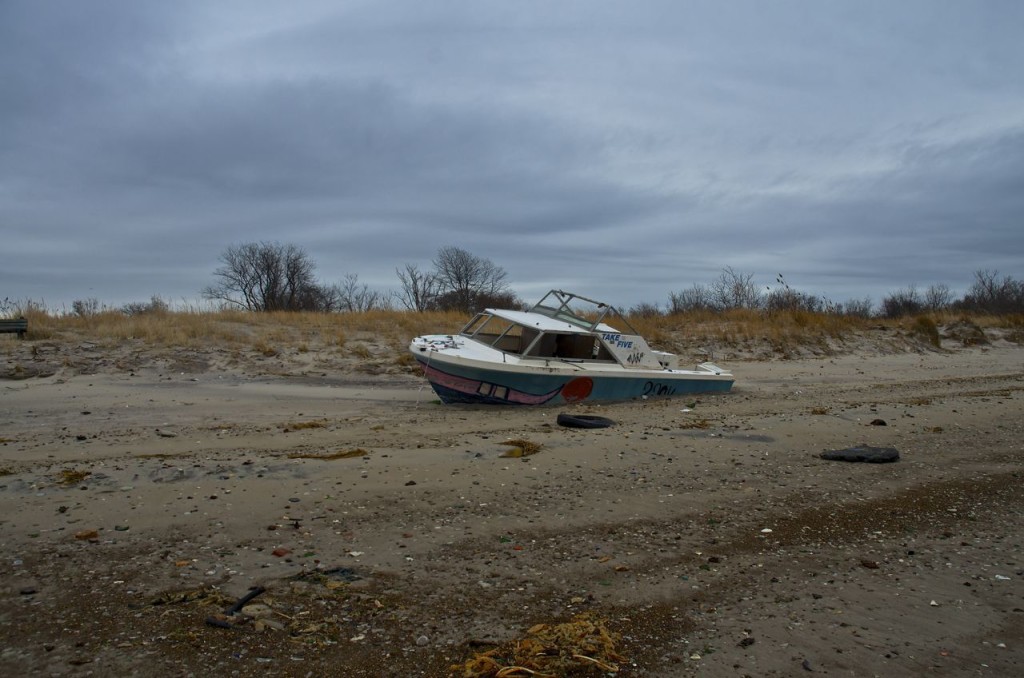 This bay gets a nasty bit of wind and monstrously high tides when the Atlantic ocean is in an uproar. Every winter and even in the summer storms, boats get washed ashore. This boat, Take Five, solidly stuck deep into the sand, looks as though it has been here for quite a while and it doesn’t look like anyone is going to come and dig it out any time soon. 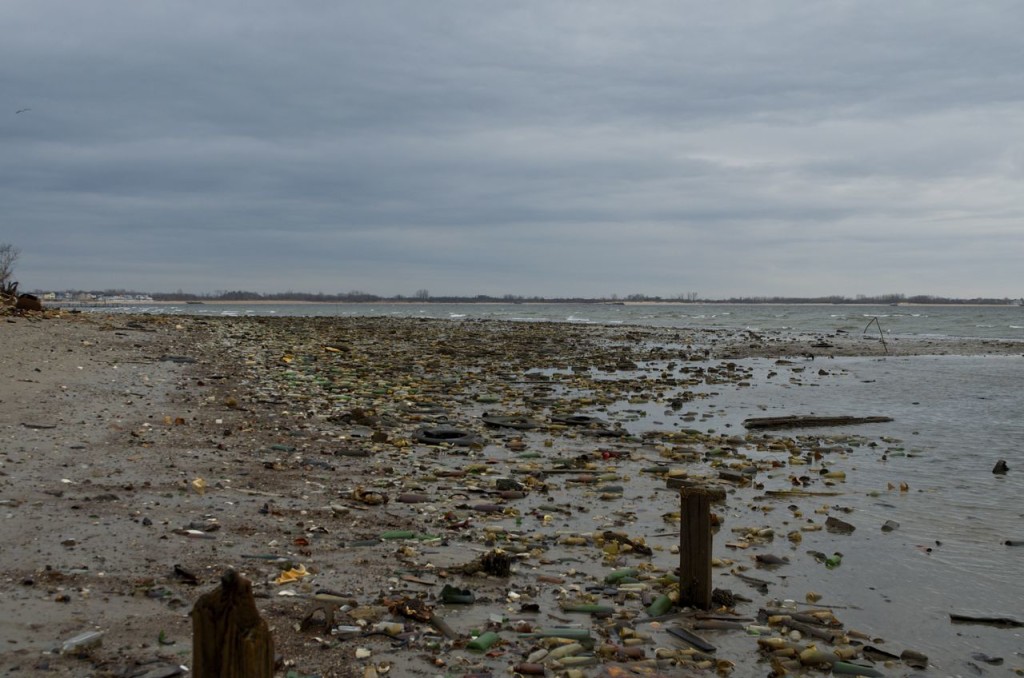 The tide was in the early stage of going out when we first walked onto the beach. I could see bits of debris scattered along the emerging low tide line, but from where I stood it looked like rocks jutting out of the sand. We had come here for the vintage glass, old bottles and other treasures that we’d heard washed up on this small beach. This debris is no quirk of nature but a result of the years that the waters in this area has been used as a garbage dump and landfill. 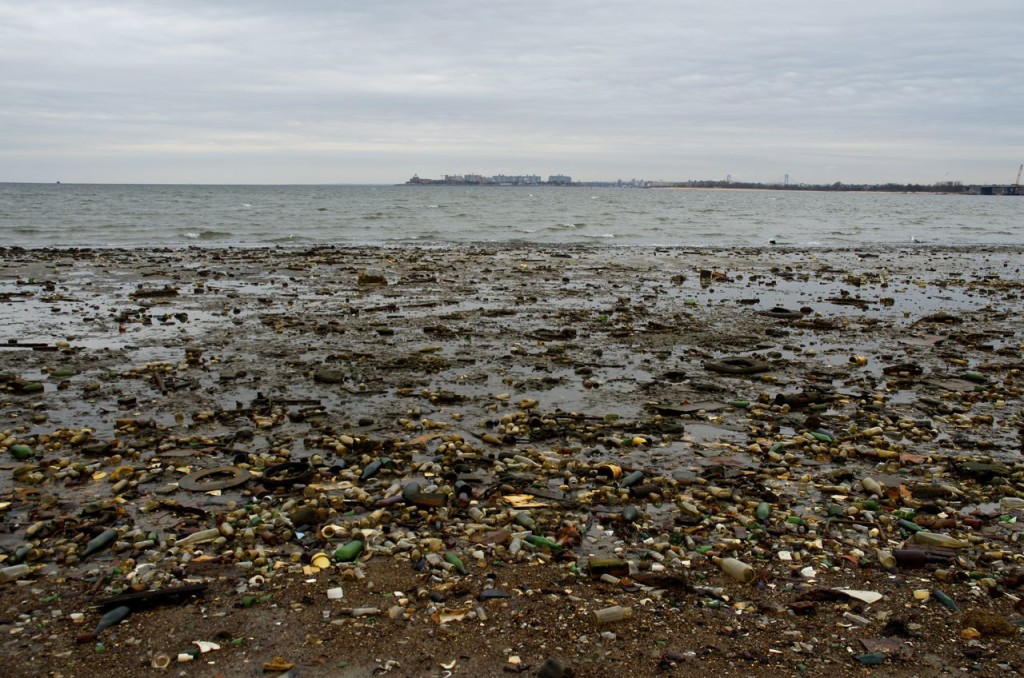 The fascination with Dead Horse Bay is locked in the history surrounding this area. It got it’s name in the 1850s when horse-rendering plants were established in this location to deal with the carcasses of dead horses and other animals from the New York City streets. The animals were processed and turned into glue and fertilizer.

In the 1860s fish oil production began along these shores when the Atlantic menhaden, an oily fish, and a member of the herring family, was found in abundance.

By the end of the 19th century the Barren Island was home to the largest waste disposal spot in the world with dozens of horse rendering plants and fish oil factories each dumping their waste into the bay. Back then the Dead Horse Bay beach was part of a chain of islands with a scant thousand hearty residents who worked in the rendering and fish oil plants. The island had an unsavory raucous reputation and was strongly identified with, and disdained for, the noxious fumes that permeated the area.

But then as the automobile became an American obsession, the horse and buggy days ended and the rendering plants closed. In the 1920s the bay surrounding the island became an official New York City garbage dump.

In 1926 the Federal Government in preparation for creating Floyd Bennett Field, New York City’s first municipal airport, pumped sand from Jamaica Bay into the marshland surrounding Dead Horse Bay and Barren Island, connecting the islands and rising the land 16 feet above the high tide mark. The bay continued to be used as a garbage dump and by the early 1930s, the waters in the area were filled with garbage. But in the late 1930s during the building of the new airport the underwater trash heap was capped and was no longer used as a garbage dump. 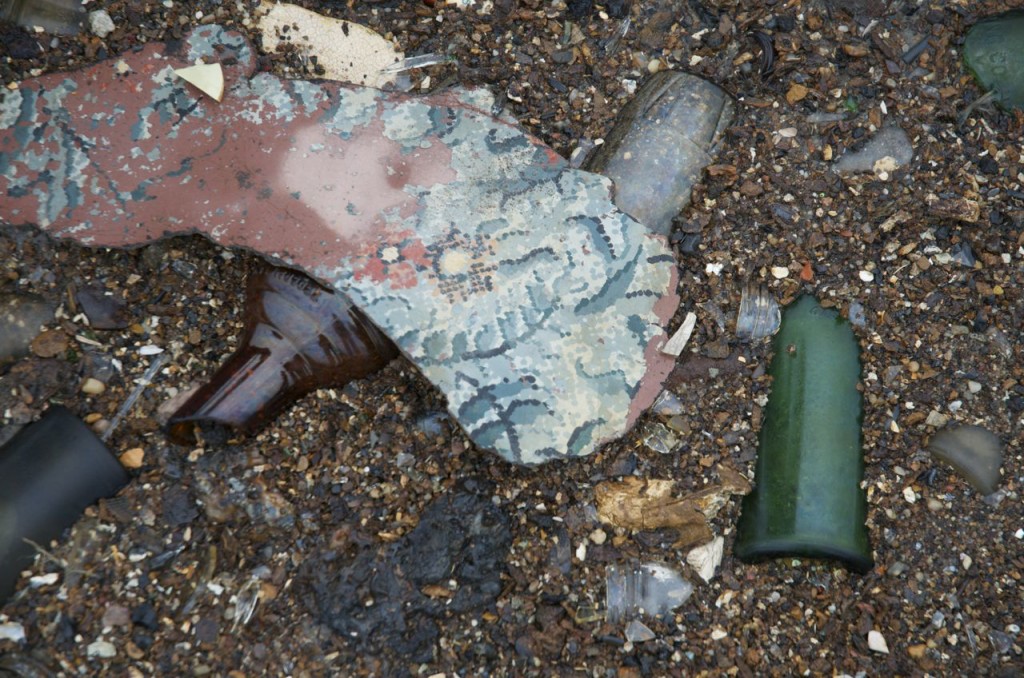 Then in 1953, Robert Moses, the head of the Port Authority, and a political power broker with independent revenue, began plans to develop the Belt Parkway, a massive highway that would eventually pass along the shores of Brooklyn and into suburban Long Island. Thousands of residents were evicted through eminent domain. Often the dislocated residents could not afford to carry away all their possessions and left behind huge piles of their belongings. Moses used the bulldozed houses and the debris as landfill to extend the shoreline along Dead Horse Bay to make more land for the parkway.

In the late 1950s, the cap that was supposed to hold in place all the trash that had been deposited into the waters of Dead Horse Bay burst, spewing out garbage and debris from its many layers with some refuse dating back to the 1800s. 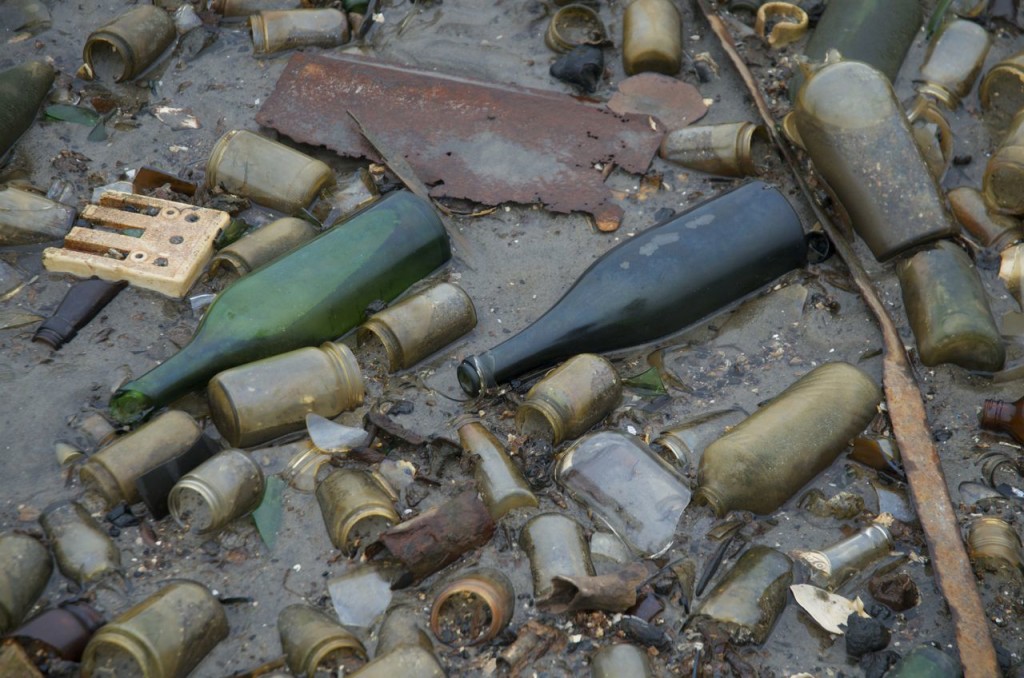 Unimaginable amounts of trash and bottles are constantly washing up on the shore of Dead Horse Bay, gathering year after year, crashing and clacking against each other making the beach a treacherous place to walk. 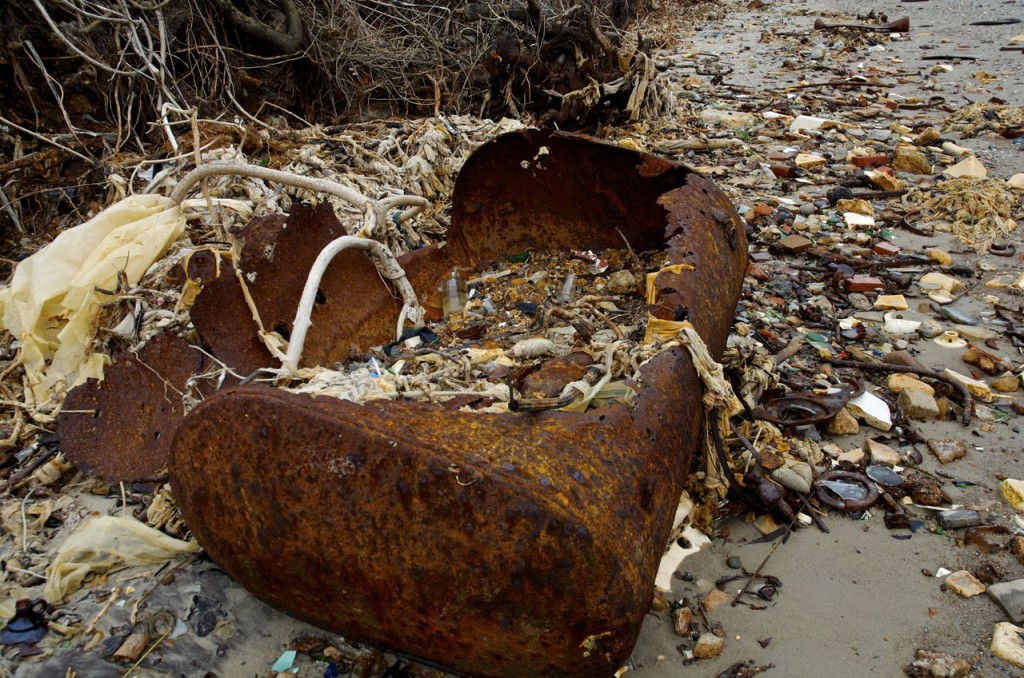 A rusted old metal tank, washed up on the shore and pushed against the embankment at the high tide water mark, looked as though it had been ripped open. Now it’s filled with hundreds of pounds of broken glass and other unidentifiable broken objects. 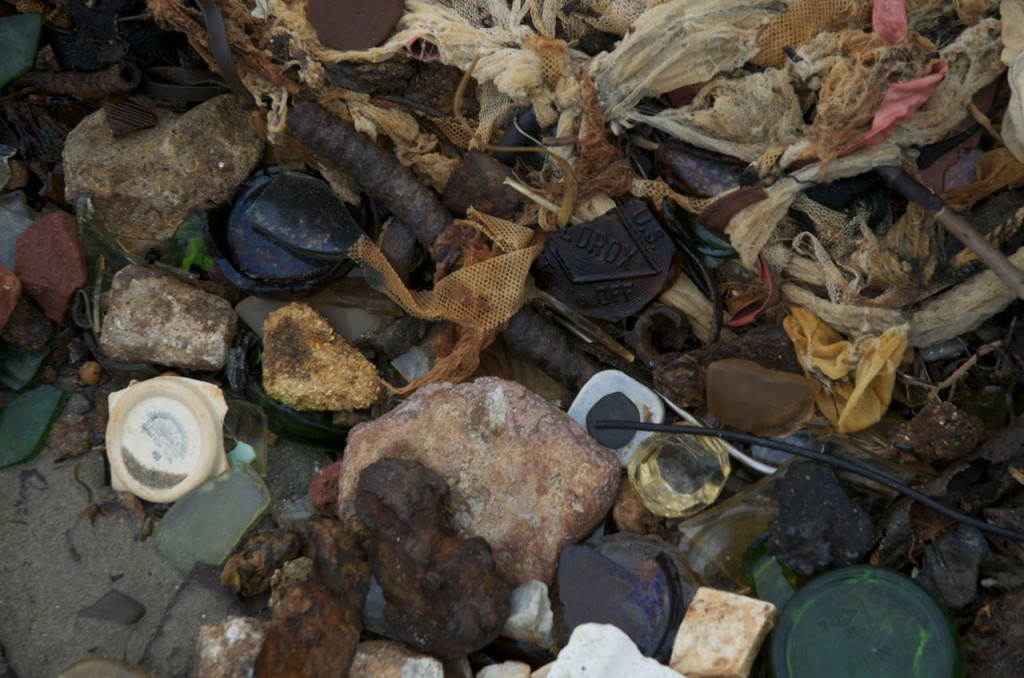 Fabric, rocks, broken glass and contorted rusted metal pieces cluster together everywhere. There is no logic, no symmetry to this landscape of discards. Some glass looks as though it had  been brought to a melting point and is now fused together with other glass or slabs of metal. 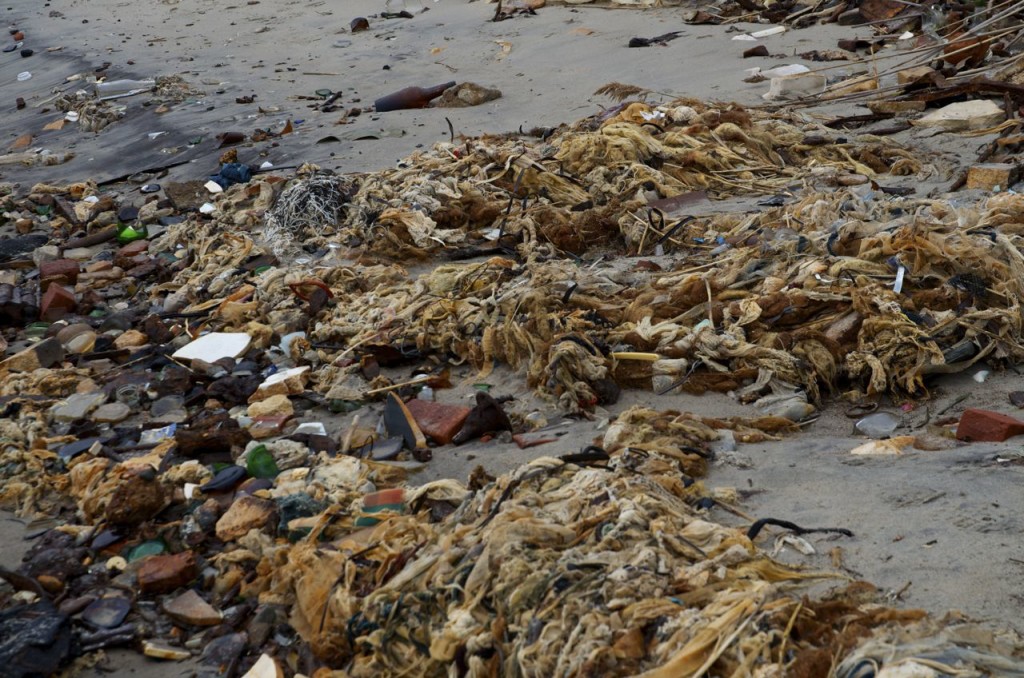 Huge swaths of bleached fabric clusters together, wrapped and twisted around other garbage and now looks like dead, dried kelp washed ashore. 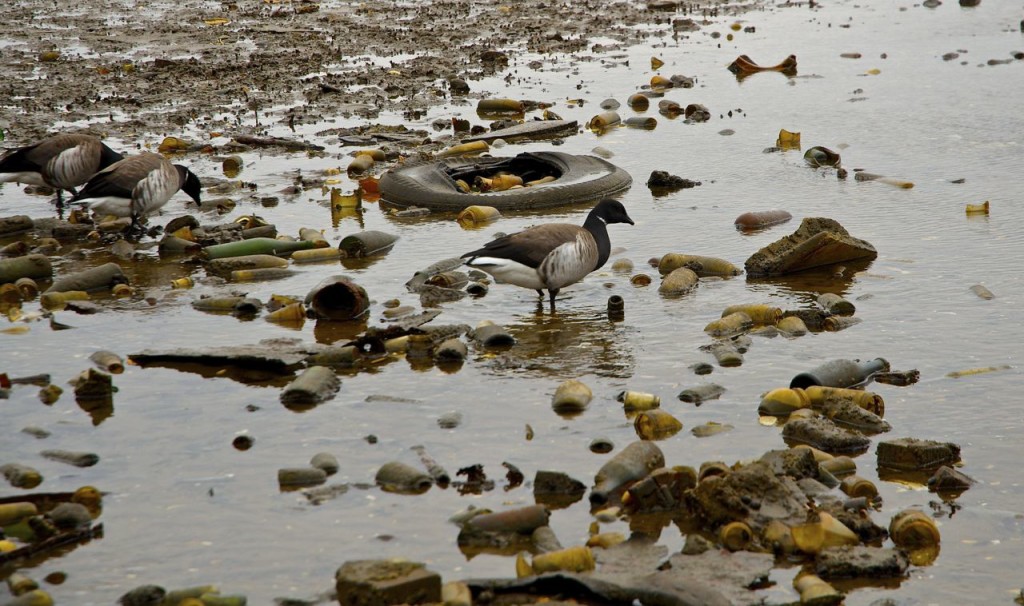 According to the Audubon society few birds use the Dead Horse Bay shoreline. We saw a few geese picking through the trash looking for wildlife living in the mud. In 1972 the bay and shoreline were acquired by the federal government and is now part of the Gateway National Recreational Area. 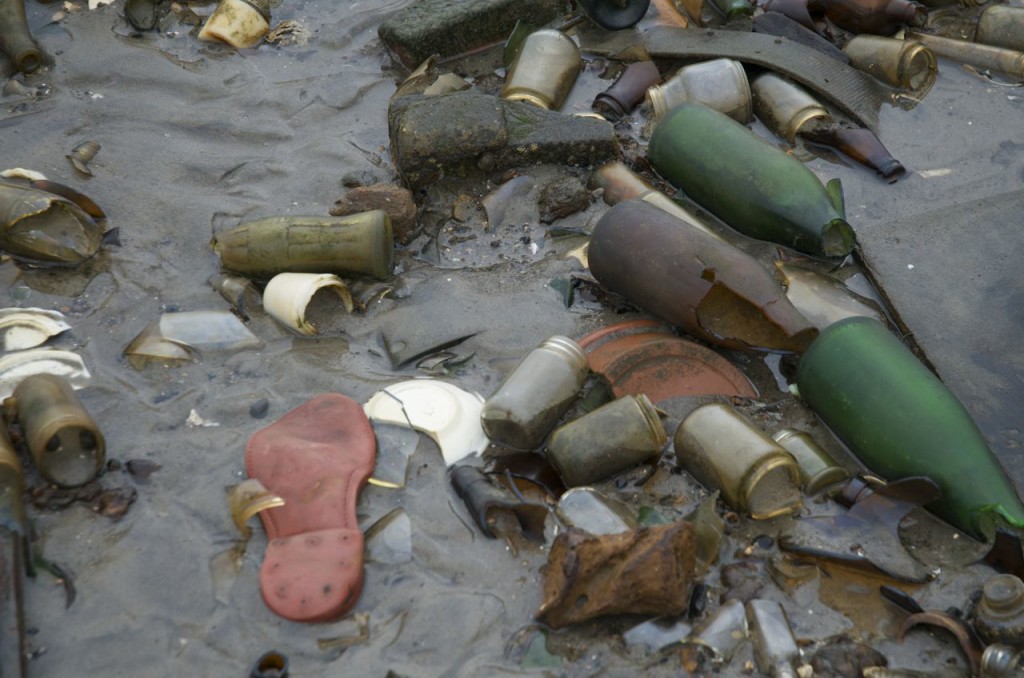 Initially I went to Dead Horse Bay to finding a treasure trove of vintage glass or something unusual. But I was dumbfounded when I saw the immensity of the debris. The broken bottles, the cracked jars, rubber soles of shoes, crazy twisted pieces of metal stretched out across the shoreline. None of it made sense. The snouts of the bottles all faced the same direction, whipped into a natural unity by the relentless tides. 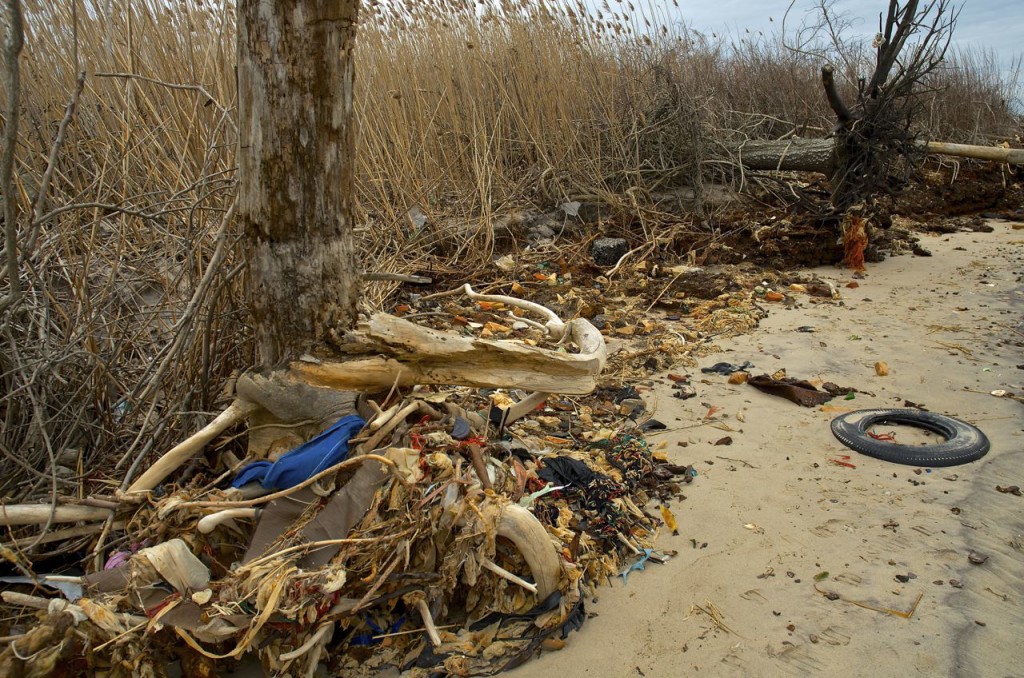 Gateway, the overseer of this area, has not tried to correct the problem of the debris washing ashore because they do not have the funds. The beach has lain fallow and strewn with debris for almost fifty years. The eroding underwater landfill remains uncapped and Gateway makes no mention of Dead Horse Bay on their website. 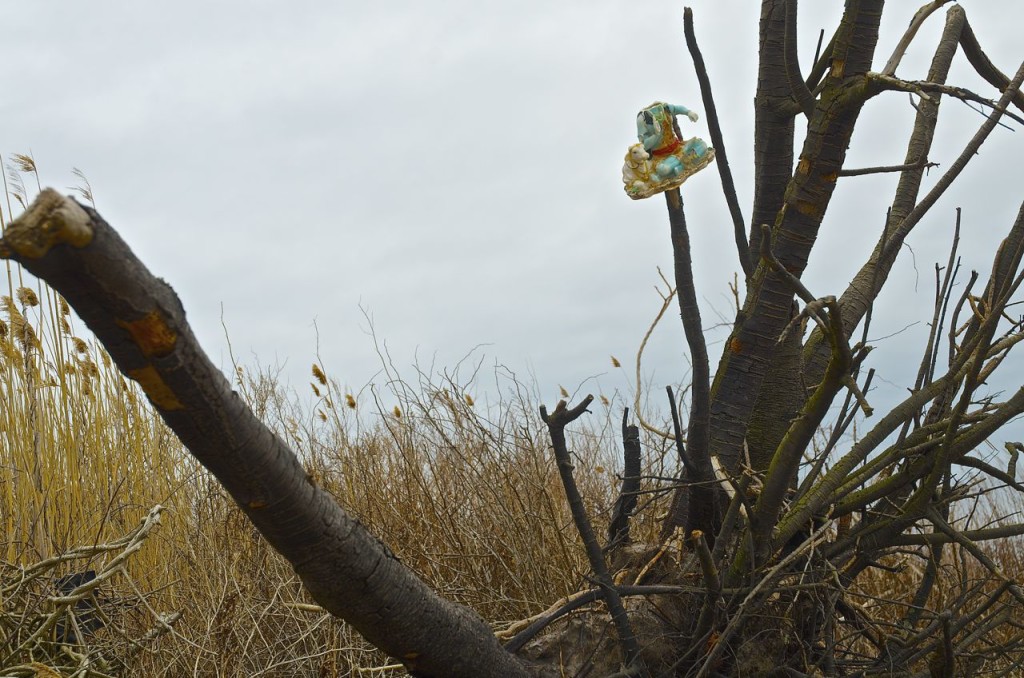 A makeshift shrine made from a small broken statue of an Indian God, perched on a broken bow of a huge piece of driftwood looks out into the bay. The fluttering water worn rags that drifted to shore catch on the tree limbs slightly resembling tibetan prayer flags. It is a macabre and hauntingly mysterious place. But it is all garbage. 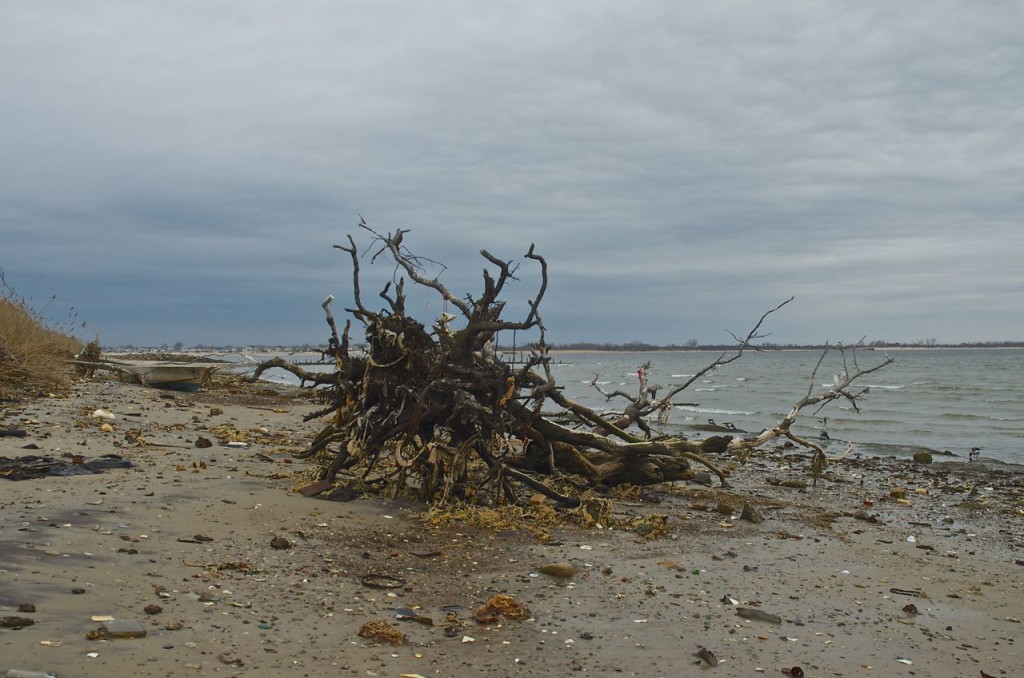 The near dystopian appearance of the beach made me think about how we dispose of garbage now. With this planet holding more than seven billion people and growing by one-hundred thousand people each day, the World Bank estimates that three billion live in urban areas and produce in excess of 1.3 billion tons of solid waste each year. And as the oceans are used more frequently as dumping grounds there is no doubt that our shores will eventually become receptacles of our discarded trash. 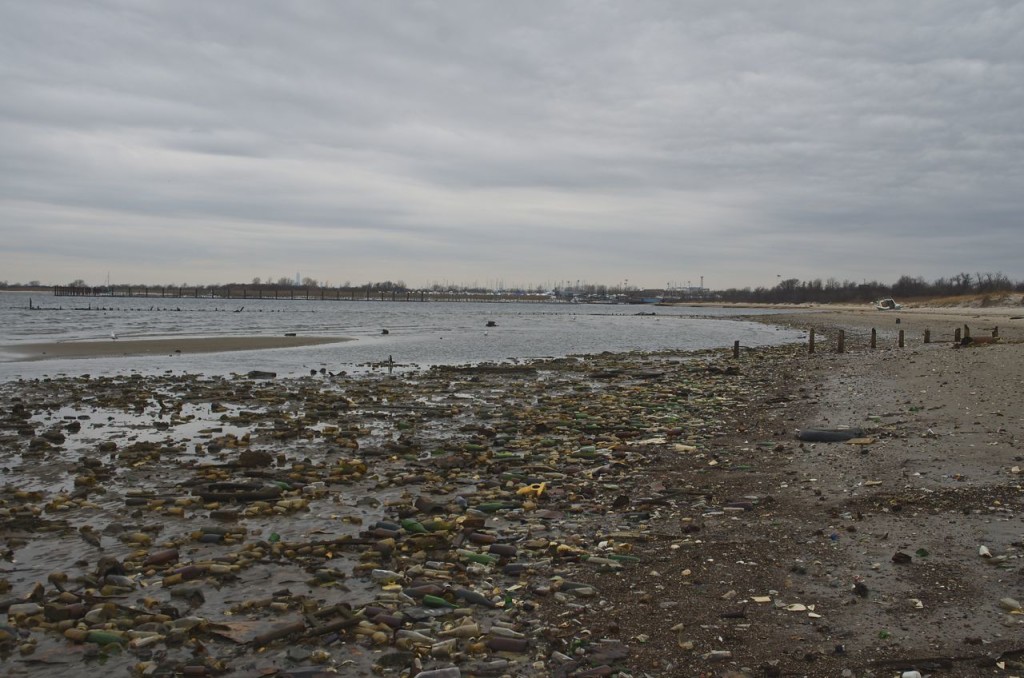 The tide continued to go out revealing more and more bottles and debris. The wind was relentless and the air so brutally cold that my fingers turned blue. I’d gathered some pieces of broken colored glass and a small collection of intact old bottles. I’d expected to come away with a few bits of debris, but I had not expected to come away from this place with such a feeling of foreboding. I thought it would be a great exploration, digging through the fragments of history that washed to shore. But I found myself in awe of the immensity of what must be sitting in the middle of that body of water and how that reflected back to contemporary reality.

By 2025 the amount of waste we produce as a planet is expected to exceed 2.2 billion metric tons a year, and by 2100 we will be churning out more than 11 million tons a day.

Instead of glass, it’s quite likely that future generations will be inundated by plastic, on our shores, floating in the oceans, lakes, seas, and the plastic will make its way into the food chain and into the bodies of our progenies as they eat the fish that live in the seas and oceans filled with the garbage of their ancestors.

I want to visit Dead Horse Bay again, but next time on a sunny day. I want to see the bottles shimmering in the bright sunshine. I to want marvel at the oddity of the area and I want to make-believe that what I fear is going to happen will not come to pass. There is a lesson to be learned from this bay. Gateway should be utilizing this beach as a warning of the consequences of dumping garbage in the oceans.