What a great day for the Dragon Boat Festival. I knew the bright sun would reflect beautifully off Flushing Lake, the light summer breeze would not hamper the flow of the boats, and the comfortable temperatures of the last couple of days would be perfect for rowing. So I hopped on the #7 subway train and got off at Flushing Meadow Corona Park. I was off to see my daughter and her friend, both members of a rowing team, compete in the traditional dragon boat races. 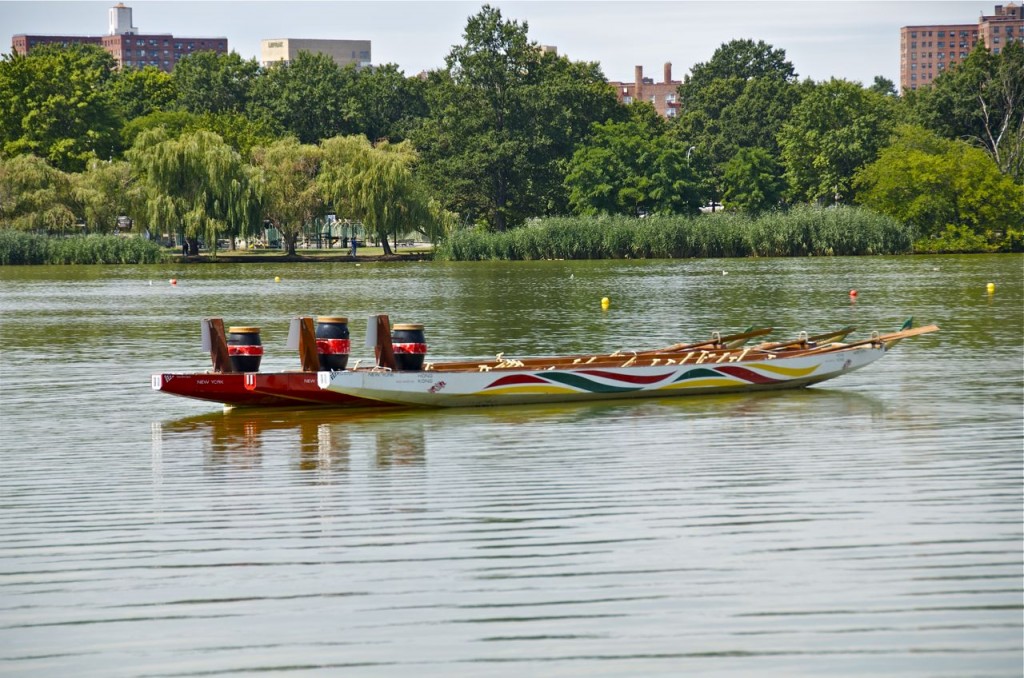 The Dragon Boat Race Festival originated in China. The festival always takes place on the fifth day of the fifth month of the lunisolar Chinese calendar, giving the festival an alternative name, Double Fifth. It is an ancient Asian tradition with a number of folk tales and myths surrounding its origin. One myth tells of a banished statesman who commited suicide by jumping into a lake. Another myth relates the early beginnings of the dragon boat races to the accidental drowning of a beloved shaman. Some believe that the races date back to the time of dragon worship, while other scholars consider how over time the races were the merging of ancient mountain gods, river gods, and the dragon god.

I first heard about Dragon Boats in 1986 when the Hong Kong Tourism Bureau donated four traditional teak wood dragon boats to NYC. Back then the races were held on the Hudson River in Battery Park City. But now the Hong Kong Dragon Boat Festival takes place in Queens, not far from City Field where the Mets play and near the site of the 1939 Worlds Fair. 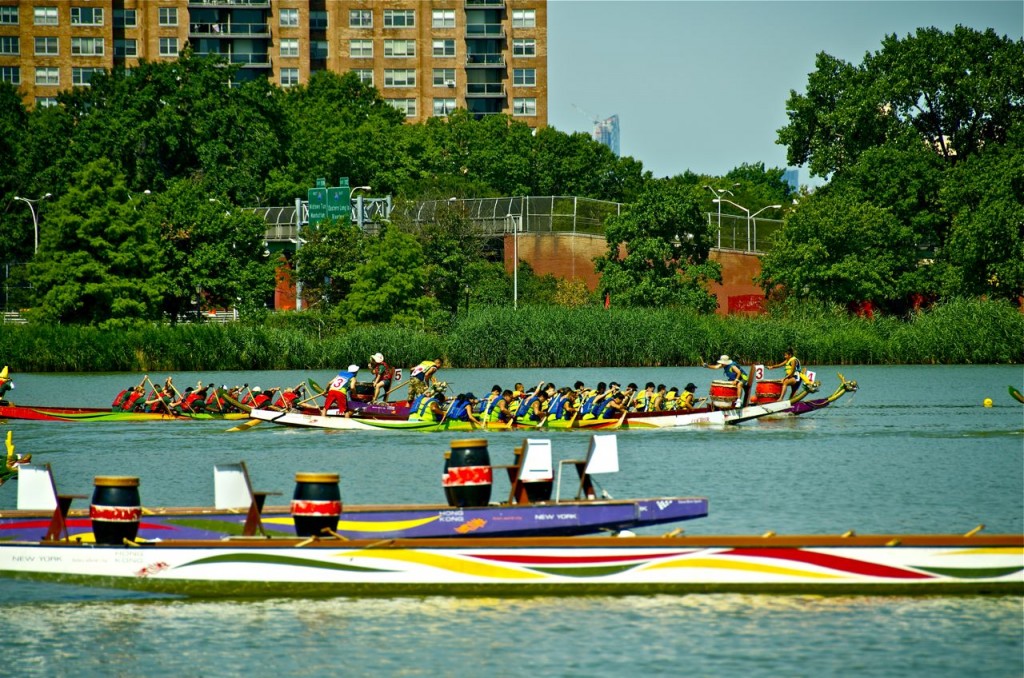 The Dragon Boat Festival is an annual tradition at Meadow Lake in Queens and is now in its 22nd year. This August, 170 dragon boat teams from across North America competed for $60,000 in prizes. 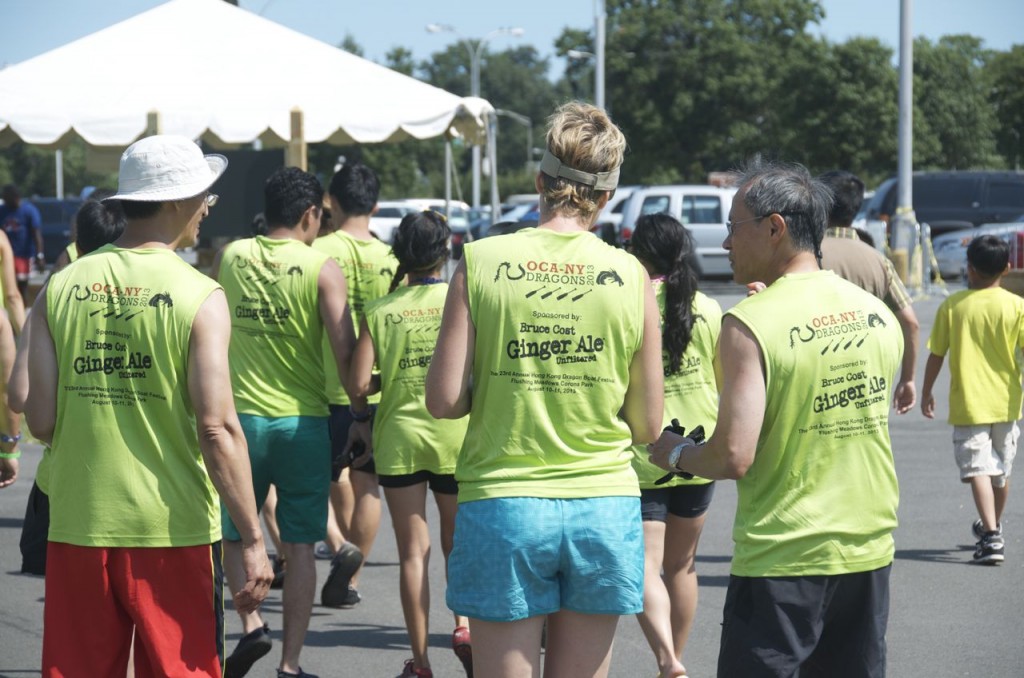 My daughter’s team, OAC-NY, came in 3rd. OAC-NY, Organization of Asian Americans, New York, was founded in 1967 and now has 80 chapters throughout the US. It is dedicated to advancing the social, political and economic well-being of Asian Pacific Americans in the United States. 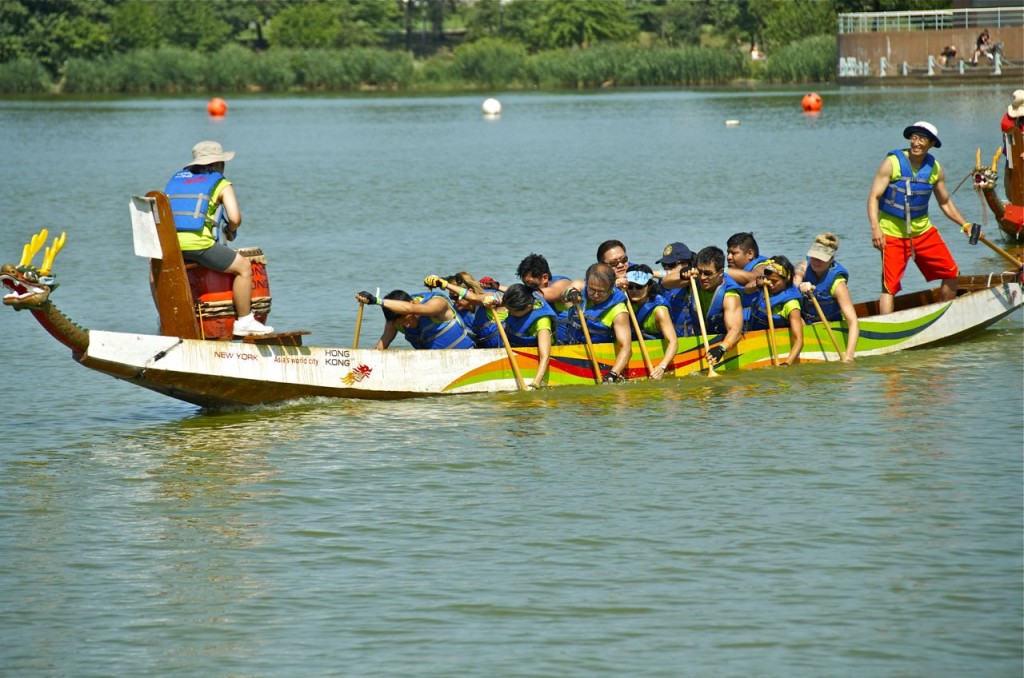 A dragon boat team consists of twelve rowers, a helmsman and a drummer. Each paddle must strike the water at the same time, thrusting the boat forward in unison. The drummer, sitting at the bow of the boat, beats a rhythm to help the rowers maintain a steady pace, while the person in control of the rudder keeps the boat moving in a straight line. 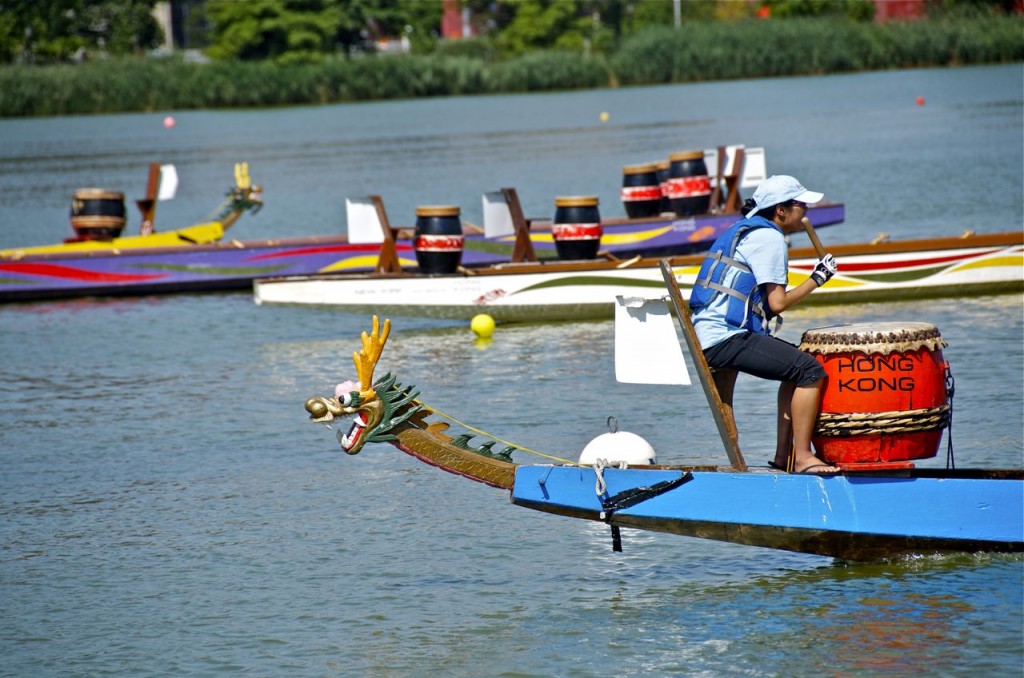 Each boat is adorned with a colorful dragon masthead. 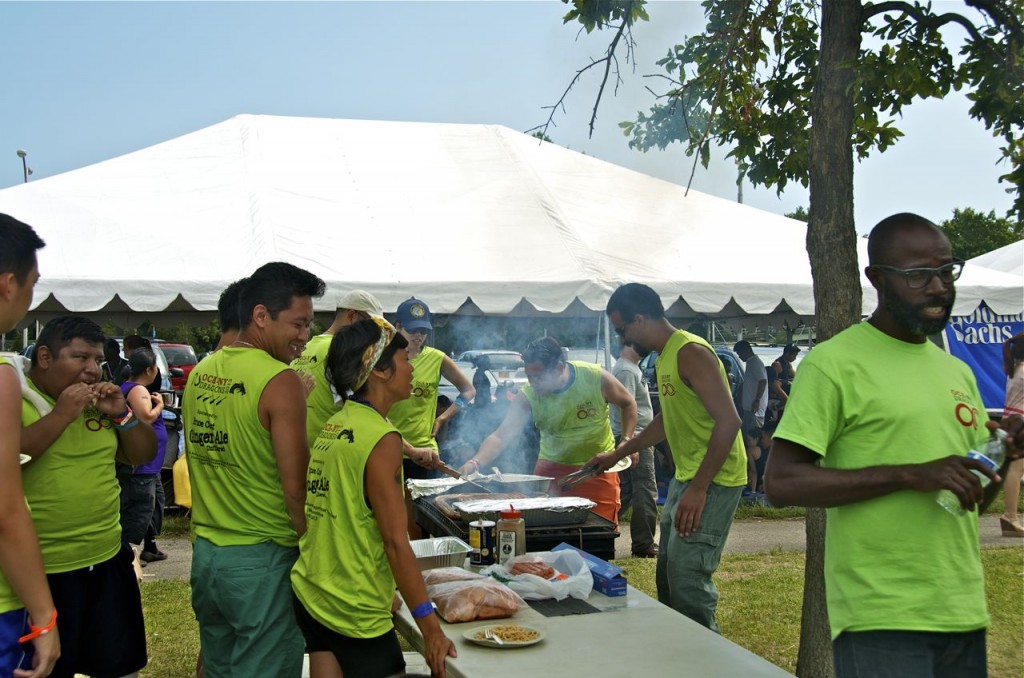 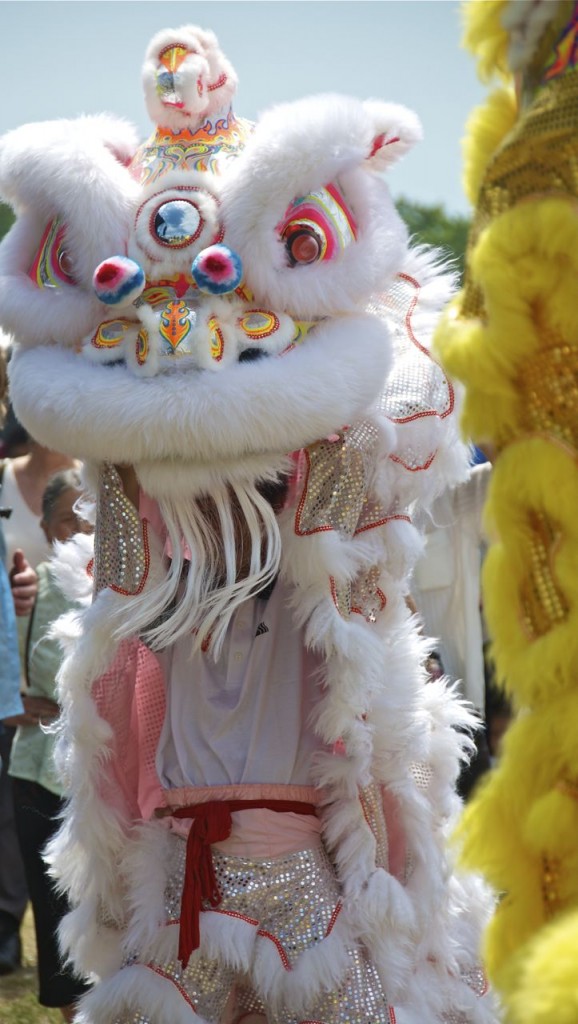 The Dragon Boat Race is a festive time with music and entertainment. This year a Dragon Dance troupe from southern Japan provided some of the entertainment. 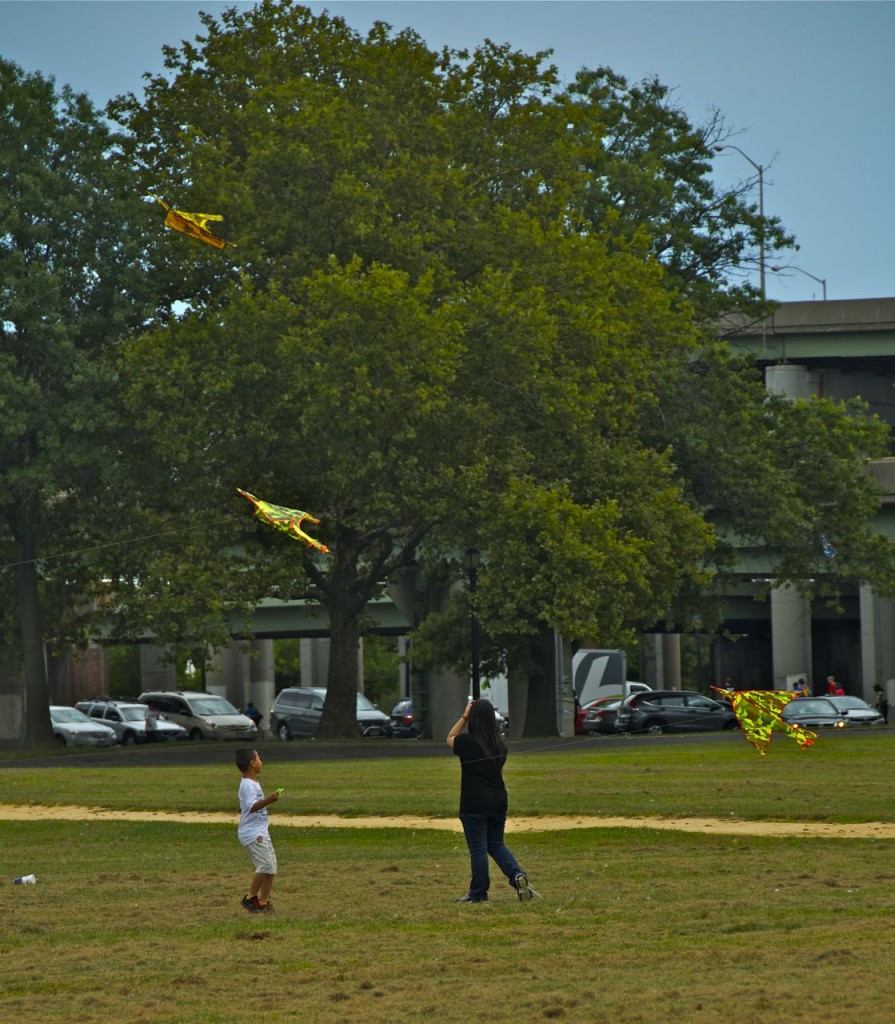 It was a great day for boat racing, but after four hours I’d had enough of watching the races and decided it was time to go home. I stopped for a while to watch a group of kids flying kites on a huge meadow. Then I retraced my steps and walked back to the shuttle bus that would take me to the subway station. 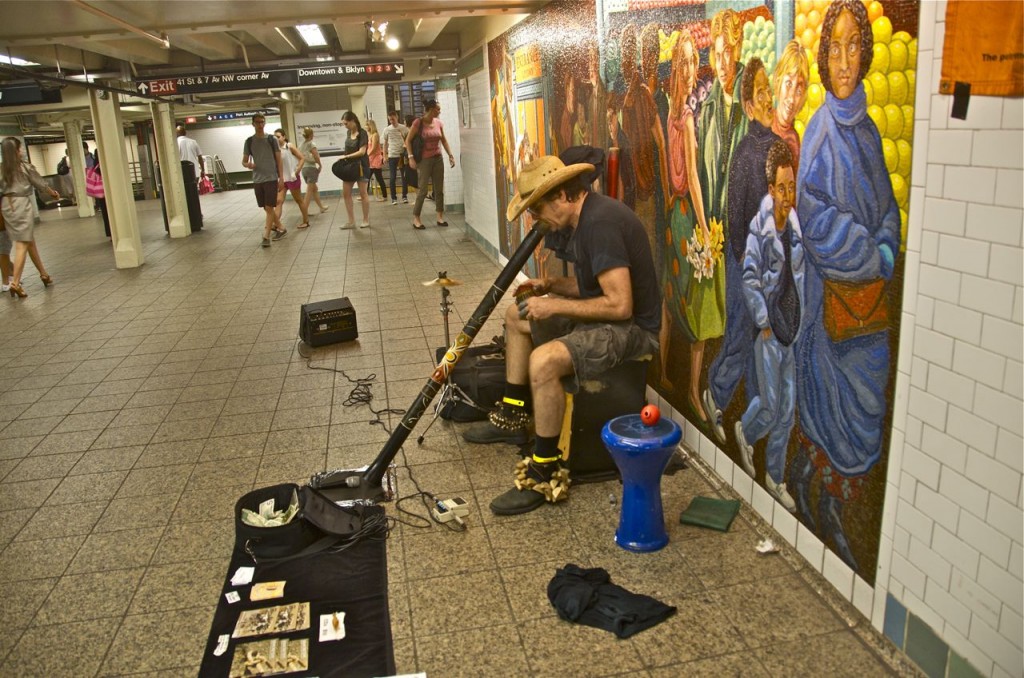 There’s always something going on at 42nd Street where I transferred from the #7 to the #1 train . On this Sunday I got to watch an energetic didgeridoo musician preforming. I stuck around for a while, dropped a couple of dollars in his music case and went downstairs to catch my train. 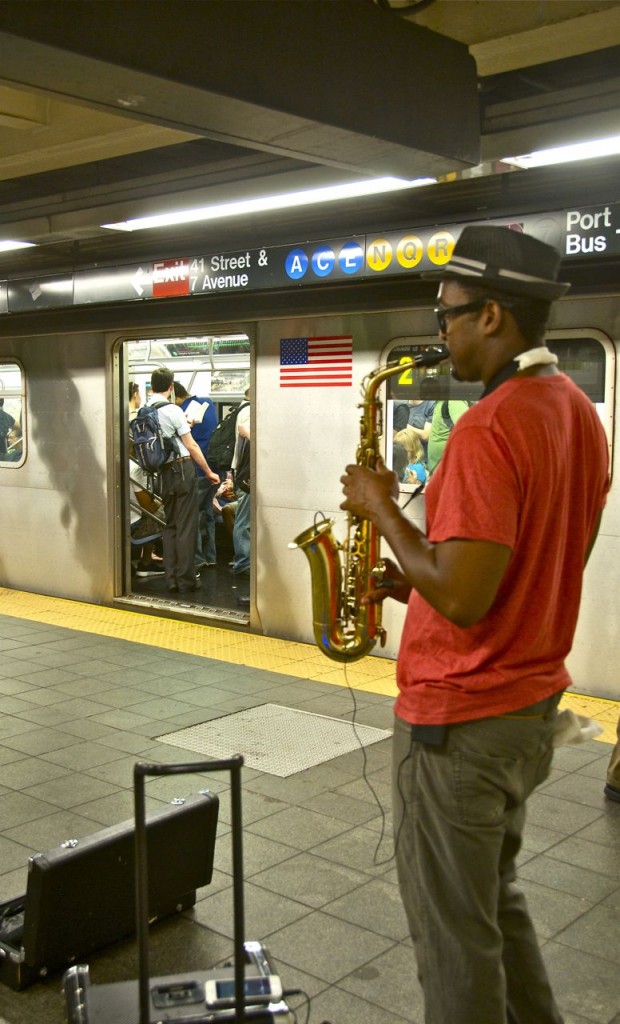 Descending the stairs I heard another musician, a saxophone player, set up on the plateform between the uptown and downtown lines. He  wailed away trying to be heard above the noise of the rumbling trains. I listened for a couple of minutes, gave him my last spare dollar and jumped onto a train heading uptown.

What a great day. Dragon boat races, fun time with my daughter and her family, hanging out in the great open air of a city park, and urban traveling minstrels. Doesn’t get much better than this.

← AN ORDINARY DAY WITH AN EXTRAORDINARY TWIST
SUMMER IS WINDING DOWN →