A friend and I took an hour and a half road trip into central New Jersey the other day to visit Grounds For Sculpture, a 42 acre sculpture garden located on what used to be the New Jersey Fair Grounds. This sculpture garden was founded in 1992 by John Seward Johnson II, an American artist known for his life-like bronze statues. He is the grandson of Robert Wood Johnson I, the co-founder of Johnson & Johnson. It was Seward Johnson’s intent that Grounds for Sculpture be “dedicated to promoting an understanding of and appreciation for contemporary sculpture by organizing exhibitions, publishing catalogues, and offering a variety of educational programs and special community events.” 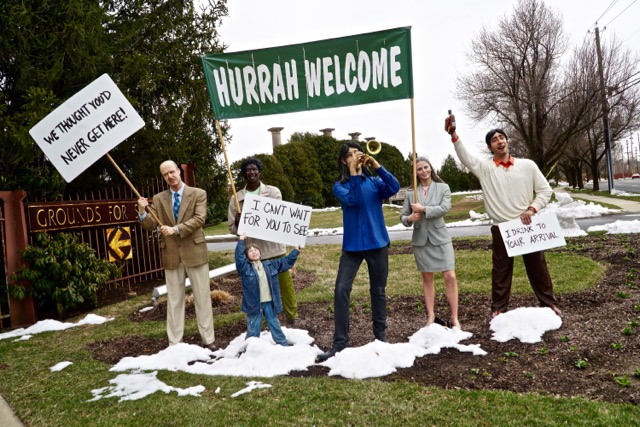 There was no doubting that we were in for a special treat when this delightful sculpture greeted us as we turned into the entrance to the Grounds For Sculpture. Initially we had come to see a special instillation, Joyce J Scott: Harriet Tubman And Other Truths. Joyce J. Scott, a fierce and profoundly honest artist works in a variety of mediums, though most of her art is constructed of beads and blown glass. But when we saw this welcoming composition of life-like statues at the entrance gate, we realized that we were in for more than we had bargained for.

The weather was colder in central New Jersey than it had been in NYC. Thankfully most of Joyce Scott’s work was on display in the Domestic Arts Building, a heated and enclosed exhibition gallery. That was a good thing because the wind had turned fierce, the sun was now deep behind heavy clouds and from time to time there were icy flurries of snow blowing in the wind, striking our faces like sharp pings of sand. 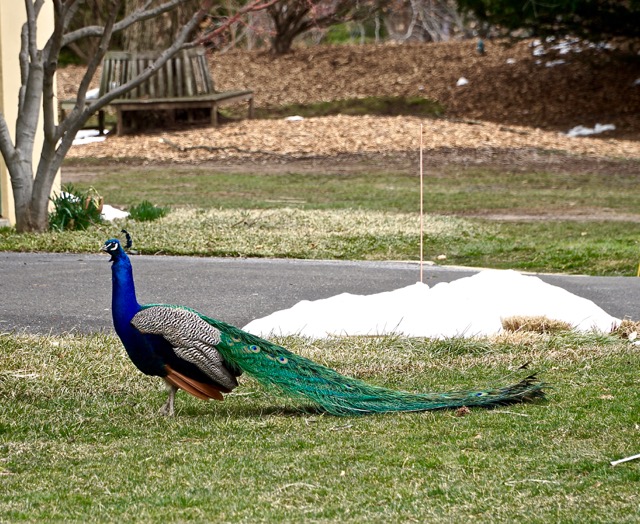 Small clusters of peacocks roamed the grounds and cried out distressed calls what sounded like, “Help! Help!” whenever we got too close to them. Though I did wonder if they were asking for us to help them get off that cold ground. I wondered,y did they want us to take them some place warm. But from what I know about peacocks, they have a high tolerance for cold temperatures. During the night they need to roost in a treetop to keep off the cold or snowy ground, though during the day these beauties are perfectly content walking along on the frozen earth. 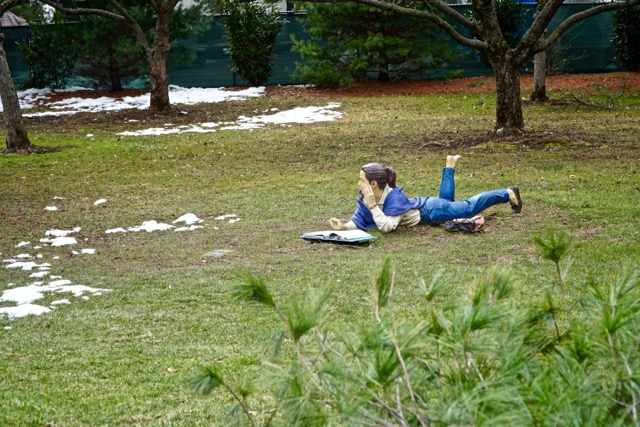 We saw several life-like statues scattered throughout the Grounds for Sculpture on our short walk from the parking lot to the Domestic Arts Building. The statue of this young girl lay atop the soggy, frigid earth as though she were lazing under a canopy of cherry blossoms in the spring. At first glance, this youthful lounger was so real looking that I thought perhaps this was a staff member taking an afternoon tea break. 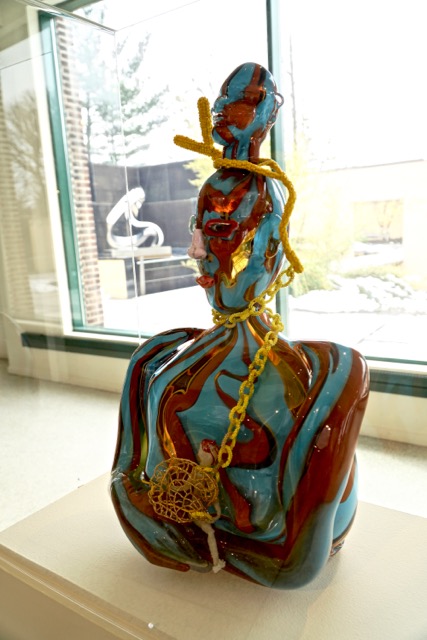 Once inside the building, even in the dulled, stormy light coming through the windows, Joyce Clark’s glass and bead sculptures vibrated with color and power. This glass bust, Dizzy Girl, is constructed in the flashy Murano glass extrusion techniques known as latticino and zanfirico. Joyce Clark spent a full year in Murano, Italy learning and experimenting with these techniques. 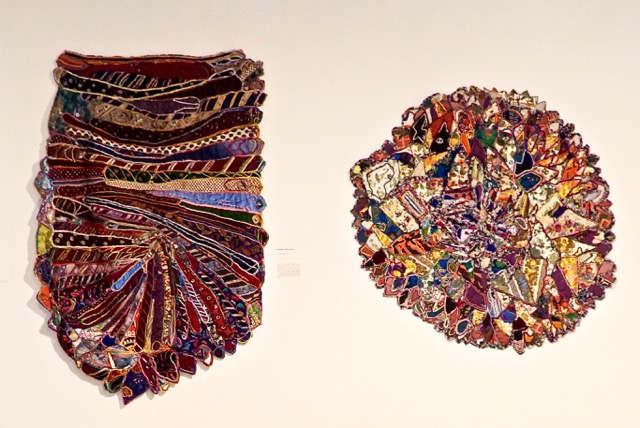 This exhibition also pays tribute to Joyce Scott’s mother, Elizabeth Talfor Scott, recognizing that it was her mother who had passed on the art of needle work and beading to her 5 year old daughter. The above quilts demonstrates the complexity of design and arrangements of fabrics created by Elizabeth Scott; one wall hanging making use of men’s ties, while the other is made up of an explosion of hundreds of different floral fabric. These wall hangings are abstract fused and sewn remnants of fabric that have, as Joyce Scott says, “no identifiable narrative or representational subject, but are resplendent abstract cloth mosaics.” 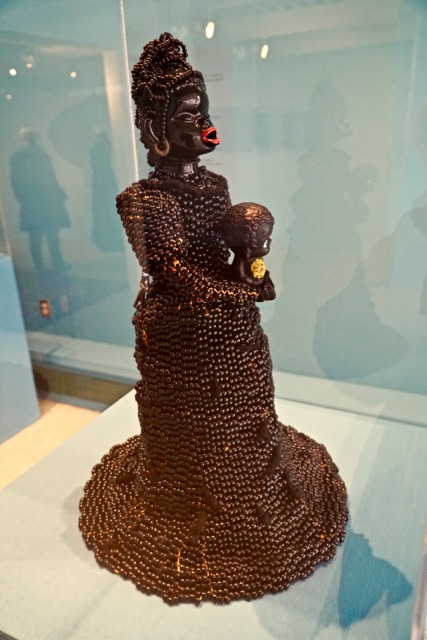 ‘Everywoman’s Harriet’ is a sculpture made by constructing a beaded garment that was then layered over a found porcelain statue. Joyce Scott often incorporates found items into her work, painting and stylizing with beads and other found objects, working a sculpture until it depicts exactly what she intended it to represent. 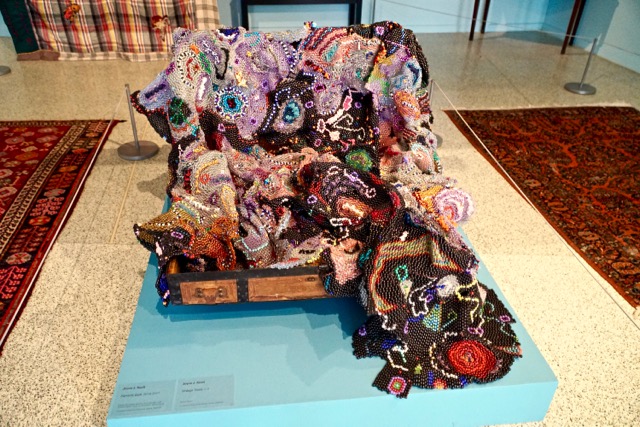 This display blew me away. It is made up of sections that lay flat in places, while some segments of the structure are tediously worked so that they curl and twist, which when put together becomes one continuous ‘beaded cloth’ titled “Harriot’s Quilt.” Joyce Scott has traveled the world learning a multitude of crafts. In 2016 she was given a MacArther Genius Award for her creativity.  The foundation praised Scott’s work, saying she is “repositioning craft, and in particular bead work, as a potent platform for commentary on social and political injustices.” 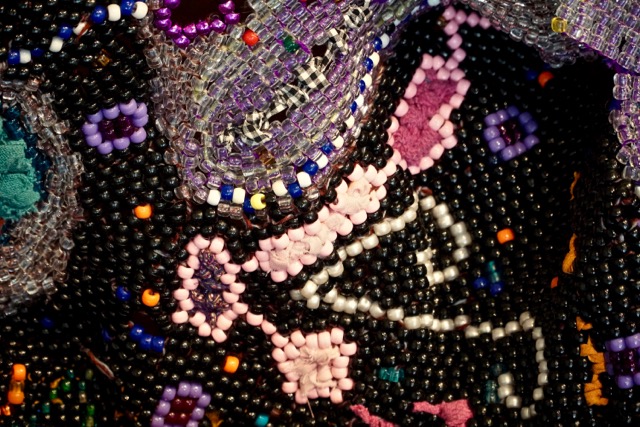 A closer look at this beaded masterpiece reveals that some of the design also has fabric woven into the structure. Joyce Scott always eager to learn new techniques, said that the most decisive moment in her creativity came when she learned the peyote stitch from a Native American bead artist. This newly learned  technique made it possible for her to make constructions without the use of a fabric backing, which allowed the viewer to observe the translucence of the glass beads. 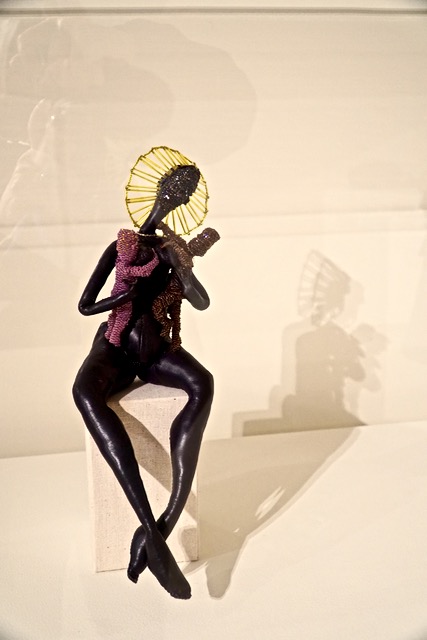 Black Madona (Madonna and Child) is a leather-skinned construction that moved Scott’s work in 1986 from a wall bound or resting position to an upright self-supporting one. In this sculpture Joyce Scott offers two Christs, a black and a white one, and suggests in this depiction of the breast-feeding,  that golden crowned and haloed Madona is a super-nanny. 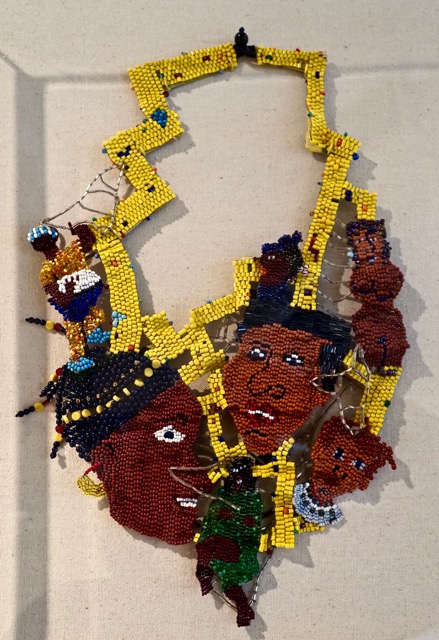 Joyce Scott is well known for her fantastically woven bead necklaces. Some of the constructions depict details of abuse as  stories of slavery come to life, while other necklaces are beautiful abstract designs. Many are for sale through galleries, on line and in gift shops of museums. 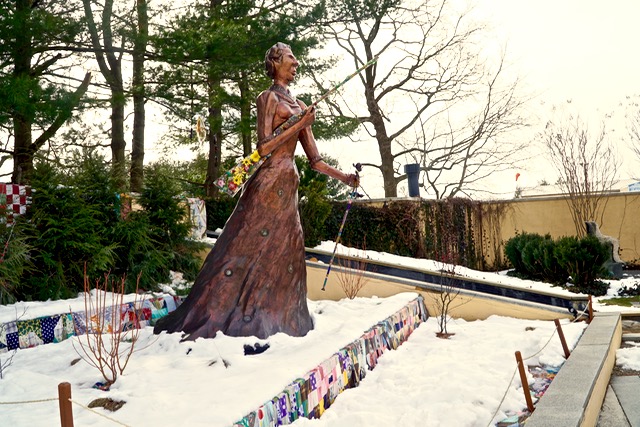 “Arninta With Rifle And Vere” is a larger than life statue (15 feet tall) of Harriot Tubman. This sculpture was constructed first by using a digital rendered depiction of Scott’s design and then the figure was milled in foam. Though the area was snow-filled, a patchwork of quilted fabric adorned the edges where the statue stood. Scraps of a huge quilt could be seen on the earth where the snow had begun to melt. 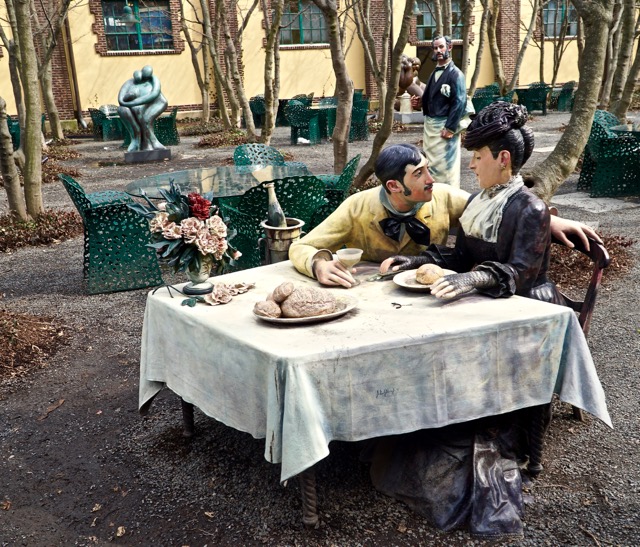 There are delightful and powerful sculptures throughout the Grounds For Sculpture. This statue with the couple sitting at a table and the waiter in the background, sits just outside the windows of the Joyce Scott exhibit. 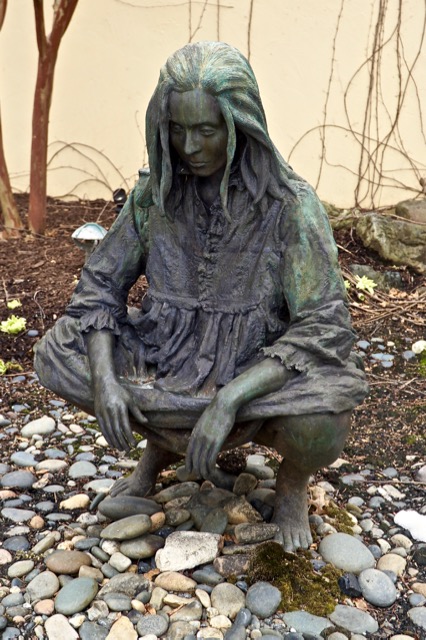 There were a half dozen sculptures in an enclosed garden just outside of the building where Joyce Scott’s art was on display. This sculpture “Untitled” by Kiki Smith, had such a realistic look from a distance that it made me do a double-take. 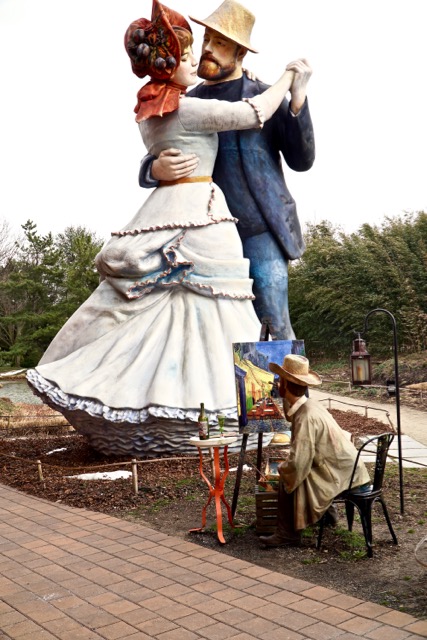 At the entrance to the Welcoming Center of the sculpture garden, there is a wonderful instillation of an artist painting a dancing couple. The painter is life size while the dancers are as tall as a house.

I regret that I did not take more photos of Joyce Scott’s work, but most of them were enclosed in glass cases, making it difficult to get a good photo without reflections. But I must come back to this outdoor gallery again, next time in the warmer weather.

4 comments for “GROUNDS FOR SCULPTURE”