We arrived early morning at Klaipeda, a port in Lithuania. It was a brilliant day with a sky so blue it looked unreal. The soft early light reflected a dazzling display on the rippling water as a slight breeze drifted slowly across the bay. The night before I had mused that in several days I’d miss the solar eclipse that many folks in the States would view. I looked out at the night sky; the blackness of the Baltic Sea mirrored a scant silver moon. I closed the curtains, crawled back into bed and marveled at the majesty of our planet.

Klaipeda would only be a one-day stopover, with part of our visit spent in Lapiai, a neighboring village.

Lithuania is an old nation. Human habitation in this part of the world dates back to at least 9,000 B.C. During the Neolithic period (6,000 t0 4,500,000 years ago) the populace of this area developed a lucrative trade in amber. Since its inception, Lithuania has been through many wars and has dealt with a myriad of shifting politics. In the 12th Century, Lithuania’s people split into two tribal groups. In the Medieval era there was an invasion by the Teutonic Knights. Powerful rulers have gobbled up this country, and at least once, Lithuania was wiped entirely off the world map.

Through every upheaval, Lithuania’s population remained a scrappy, and unruly bunch. Though the plucky soul of its people would eventually have their limits tested when this area of the world fell under the brutal rule of Russia in the late 1700s. After WWI, Lithuania changed hands several more times. And then in 1941 it fell under the control of the Nazi occupation. Thousands of Lithuanians were enlisted into the military; men and women were conscripted for forced labor, while Jews were killed in the ghettos or sent to concentration camps.

At the end of WWII as the Red Army took control of the Baltic countries, 80,000 Lithuanians escaped to the West. Even with all the horror that had gone on with the Nazi occupation during the war, a majority of the Lithuanians preferred the Germans to the abuse they had experienced under the rule of Russia. In the years from 1944 to 1952, when the Soviet Union had supremacy over this part of the world, more than 250,000 Lithuanians were killed while others, deemed subversive or rebellious were deported to Siberia.

In 1991 Lithuania gained it’s independence from the Soviet Union. It is now a member of NATO and the Euro is the country’s currency.

This may be a bit more history than usual on my blog, but I felt it was important background to what I tell you next. 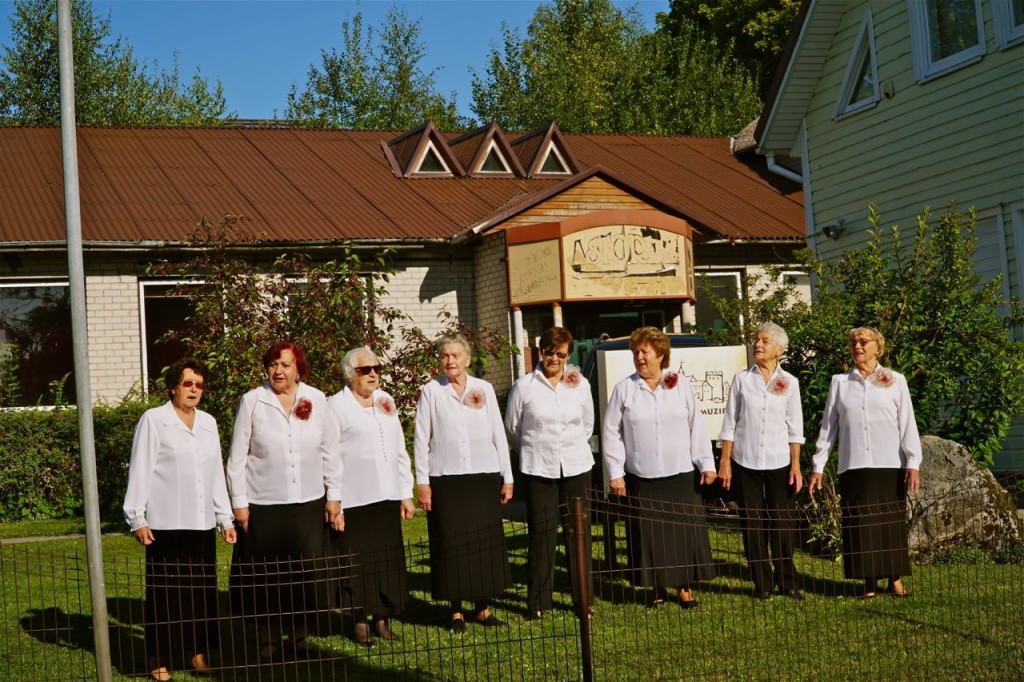 Traveling by bus through the Lithuanian countryside, with the deep green forests and the late summer bounty stretched out on the fields ready for harvesting, the view seeming so recognizable, that I imagined we could have been anywhere. But we were thousands of miles away from the truly familiar, and were about to enter into a world I had only read about in books.

Arriving in Lapiai, we were greeted by a small chorus of grandmotherly women singing a welcome greeting. They had been part of the Lithuanian children who had been relocated years ago to Siberia. Their families broken up, mothers sent to one area, fathers to another while the children were grouped together in special homes. These women had been children when the spoils of war were divided and the resistance fighters were sent to Siberia.

These women sang folk songs they had sung as children, songs that were memories of a place and time when they were too young to fully understand the magnitude of politics. These songs had helped them remember their roots; the words were auditory tattoos inked across their young minds. 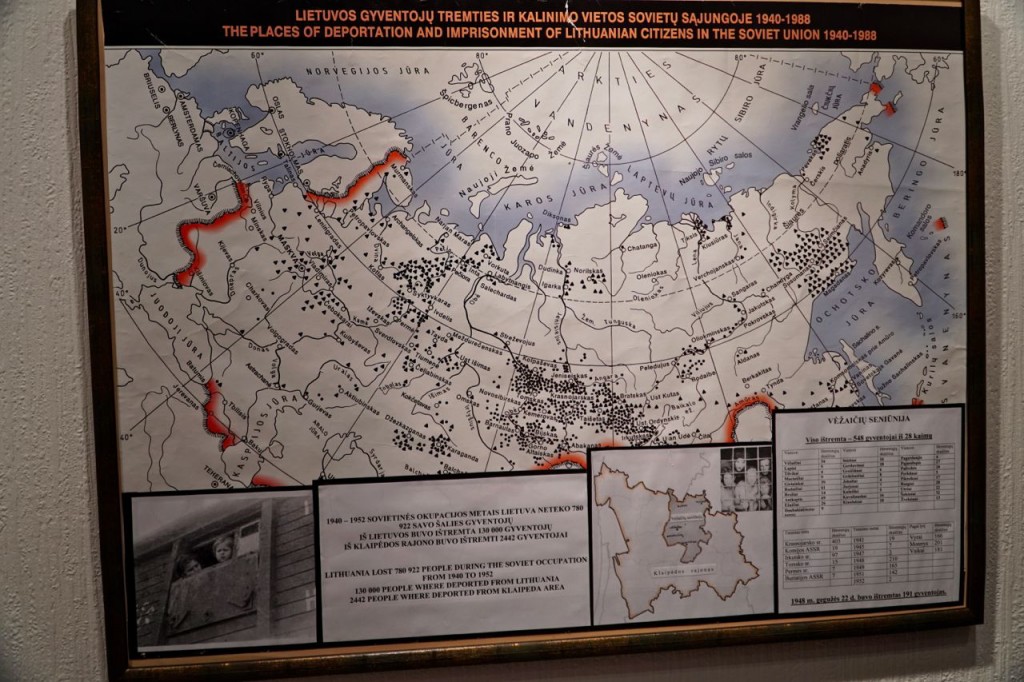 This is a map of where the relocated were sent. The black dots indicate destinations where the Socialist Worker’s Party intended to establish communities in the tundra and on the icy, frozen earth. This was an area where even in the wildest of my imagination I could not understand how anyone could survive. Miners, farmers, laborers of all kinds, including strong bodies to work in forestry, were sent to these frozen outer regions.

Watching these ladies sing I tried to imagine them as children. Some would have been toddlers all those years ago, others beginning the first years in school, when perhaps their mother might have given a piece of bread to a starving Lithuanian rebel. Neighbor turned on neighbor, brother against brother, many who were fearful of being arrested, reported any sedition to protect their own family. The mother handing that piece of bread to the weakened rebel would most likely have been turned in, her life forever changed as she would have been arrested for subversive activity and sent to Siberia.

There is no limit to what harm we humans can do to each other and no country is squeaky clean. But these women with their wrinkled faces and their grey hair filled me deeply with sorrow as they sang songs of what they had lived through. Even though I could not understand the language, the intent, the power of their personal experience came through very strongly.

The Lithuanian Government has set up a program to assist any person or family member surviving a deportation. Anyone returning back to Lithuania will receive housing, a pension and will once again become a full Lithuanian citizen.

We got back on the bus. The ladies sang a farewell song to us as they waved goodbye with their small bundles of flowers. A man sitting at the back of the bus began to cry as we drove away. His family had come from Klaipeda. Several brothers immigrated to the States right after WWII while other relatives remained in Lithuania. His wife comforted him, but it was clearly a painful experience for him. 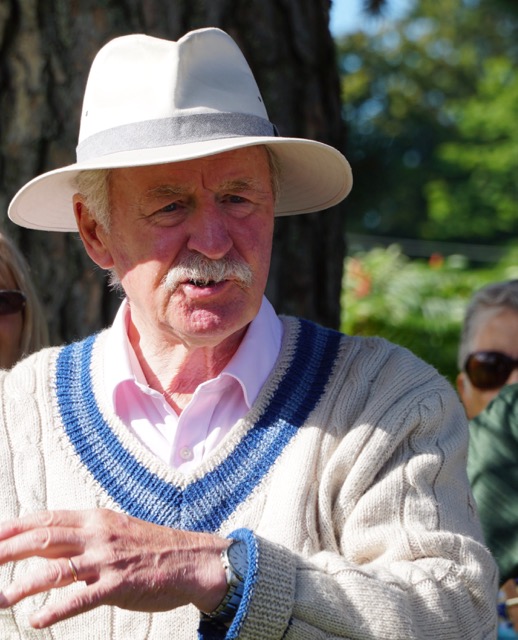 Our next stop would be deeper into the countryside where we’d meet the first British Defense Attaché to Lithuania after gaining its independence in 1991. He was a trim, dapper gentleman with a jolly red face, still looking slightly military in his preppie sweater and fedora. The stories began to flow as soon as we stepped off the bus.

“You have just missed the large flock of cranes that nest on this property,” he told us. Then pointing off into a distant field he said, “That’s the only family that’s still around.” We looked in the direction he was pointing and saw a large crane sitting atop a nest on a pole in the middle of a meadow.

David Holland was his name and he had been a bomber pilot in the RAF during the Cold War. We walked around his property with him, listening to how he stocked his pond with algae eating fish, how he likes to gather eggs from his chickens, how he’s contemplating raising peacocks. All the while we walked through his vegetable garden he told us about flying missions in the Baltic States, Belarus and Ukraine. There was a long list of things he had done, all of them either in the military or at the behest of the British Government. When he mentioned that he’d been an Attaché, I wondered, hmm, spy. 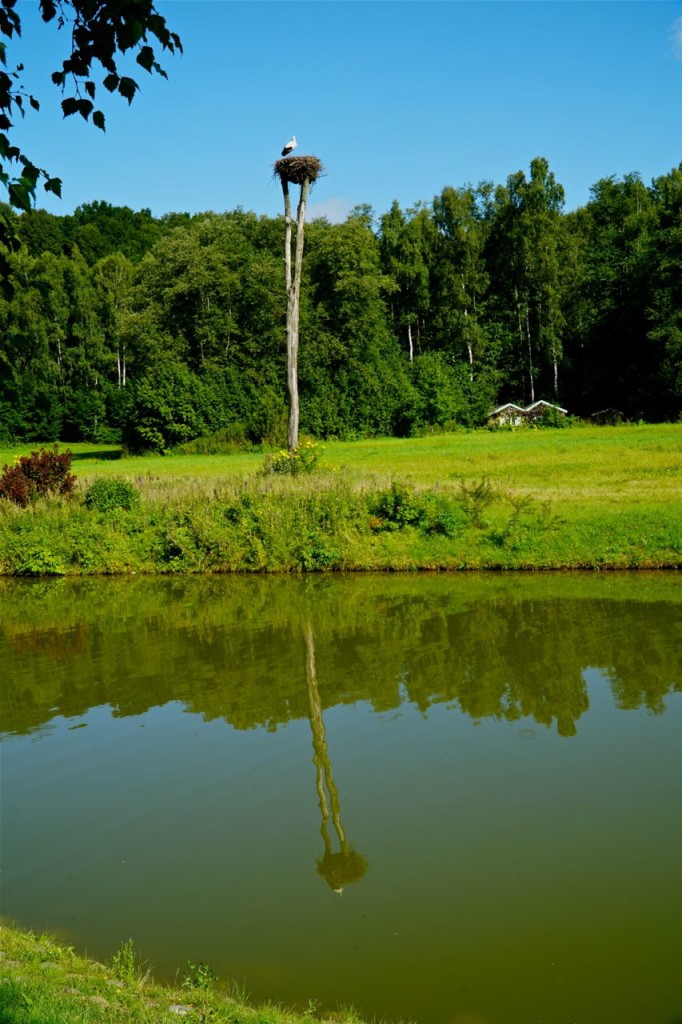 No country home in Lithuania is complete unless it has a nesting crane next to its pond. I wondered if this long murky body of water would be deep enough to hold a submarine. 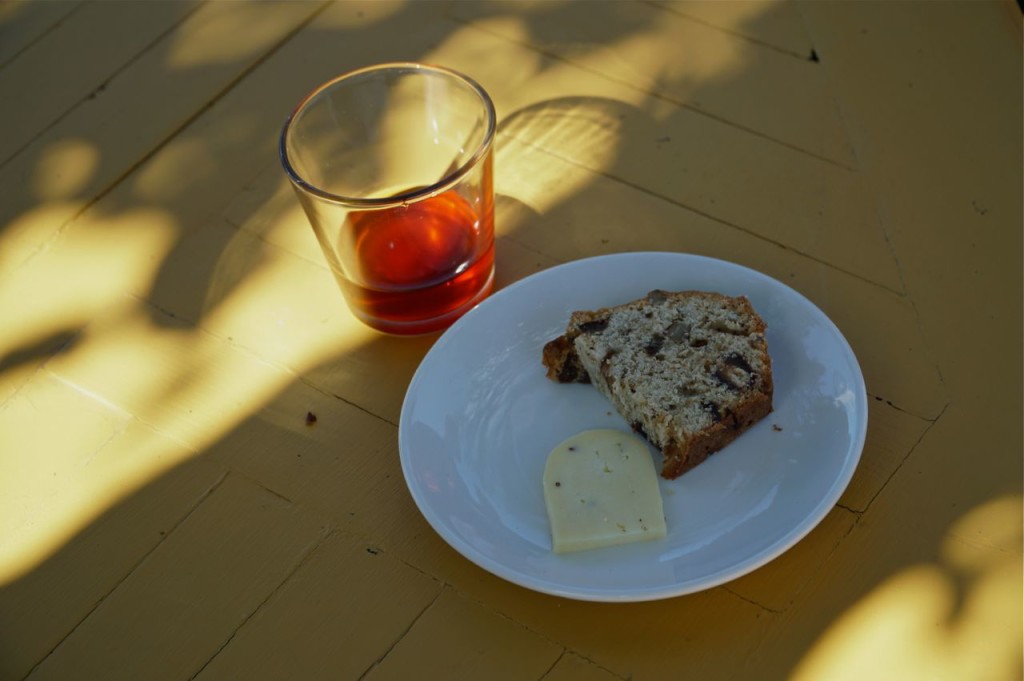 Migle, David Holland’s wife, was a gracious hostess, too. A table was set out for us under a large shade tree in the back yard. Slices of fresh baked cake, studded with dried fruit, had been arranged pleasantly on a lovely platter. Glasses of local wine and brandy were lined up, with enough beverage to make everyone happy.

As we prepared to go, we learned about how David and Migle were working with local authorities to establish an orphanage. It would be large enough to house 150 children, including 45 of which were special needs children. David never stopped talking and as the last person got on the bus, he climbed on board with us. He told a few more stories and then as he turned to leave he said, “You are bound to see a few more cranes at this time of the year. Though most of them have taken off for Africa. But,” he said, “seeing a crane take off in flight will give you 7 years good luck.” He gave us a half-wave-half-salute and said, “Good luck to you all! And come again. You’re always welcome.”

We did see cranes. Some were already in flight and one plump winged beauty flapped and danced, and then like magic took flight. Ah, only half of the bus saw the crane and was blessed with 7 years of good luck while the other half who were sitting on the other side of the bus, will just have to muddle through the next 7 years trying to make their own good luck. 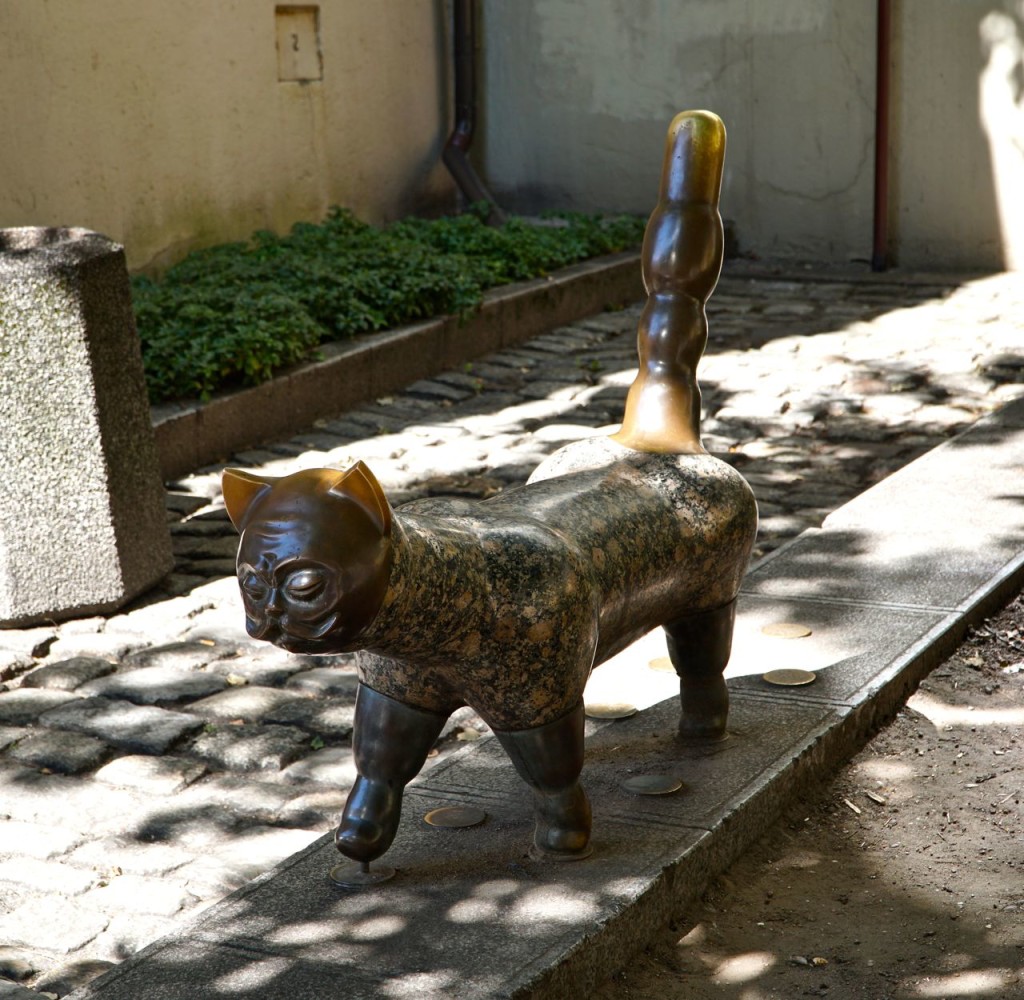 Once back in Klapeda, we took a short tour. There was not much to see in this small port city. But what took me by surprise were the statues scattered along the sidewalks, the gardens and in some of the most unexpected places. I particularly loved this marble and brass cat. It had such character and when we came upon it, the sun was shining perfectly along its lovely fluffy tail. There were statues of mice and flowers, all of which were unique and delightful encounters. 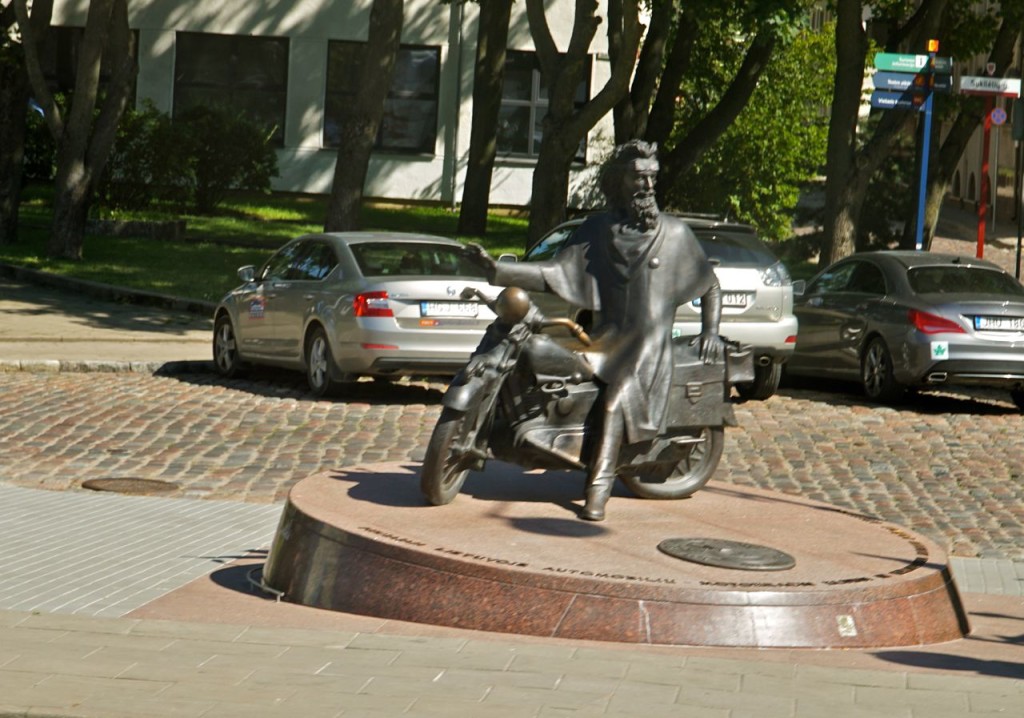 My favorite statue was this guy on a motorcycle. Initially I thought it was just a random fantasy of a sculptor. But it was a monument for an astonishing Lithuanian, Antanas Poska, who with another man in 1929 drove motorcycles from Lithuania to India. Antanas was a traveler, an anthropologist and a journalist. While in Bombay he received a degree in anthropology from the University of Calcutta and upon his return to Lithuania in 1936 he worked as a journalist. He has been recognized as the Righteous Among the Nations for hiding three Lithuanian Jews during the Holocaust in Lithuania. After the Soviet takeover in 1945, Antanas was arrested and sent to a Gulag when he refused to destroy books. He lived to be 89 years old.

I took a photo of  this statue and I surmised that Antanas Poska quite likely embodied the strong life force that runs through the citizenry of this small country.

← I AM A GUEST BLOGGER TODAY
GROUNDS FOR SCULPTURE →