I don’t know about you, but I’m ready for winter to be over!! It feels like it’s been a never ending season this year. And though we’ve had some nice days here in NYC, the cold and wind seem to have been going on long enough and I want Spring. There’s nothing that I can do about the weather but I thought perhaps a change in scenery would lift my spirit so we headed out to Long Island to get a view of the wintery ocean. 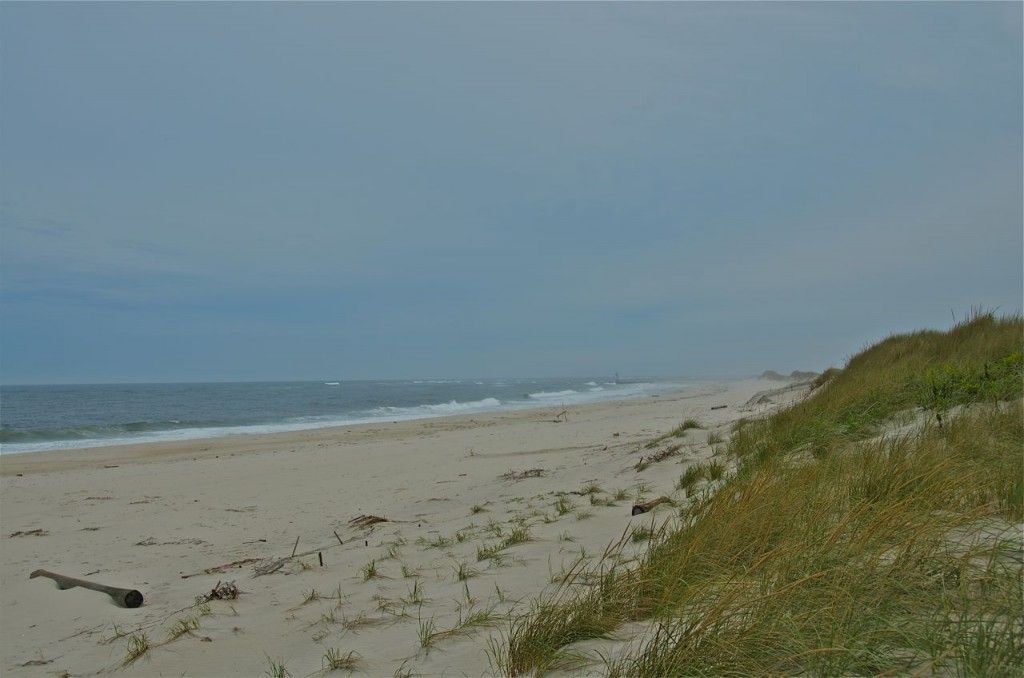 I hadn’t been to Long Island since Hurricane Sandy had made a mess of the shore line of the East Coast. I’d seen photos and videos, but I wanted to see it for myself. Once we arrived we drove to the Inlet in Hampton Bays where we’d heard there’d been some damage to the dunes. Most of the dunes were still rich and thick with grass. Though there were some areas that had been washed flat, the grass and wild roses pulled out by the root, laying the beach barren and now vulnerable to the next storm surge. 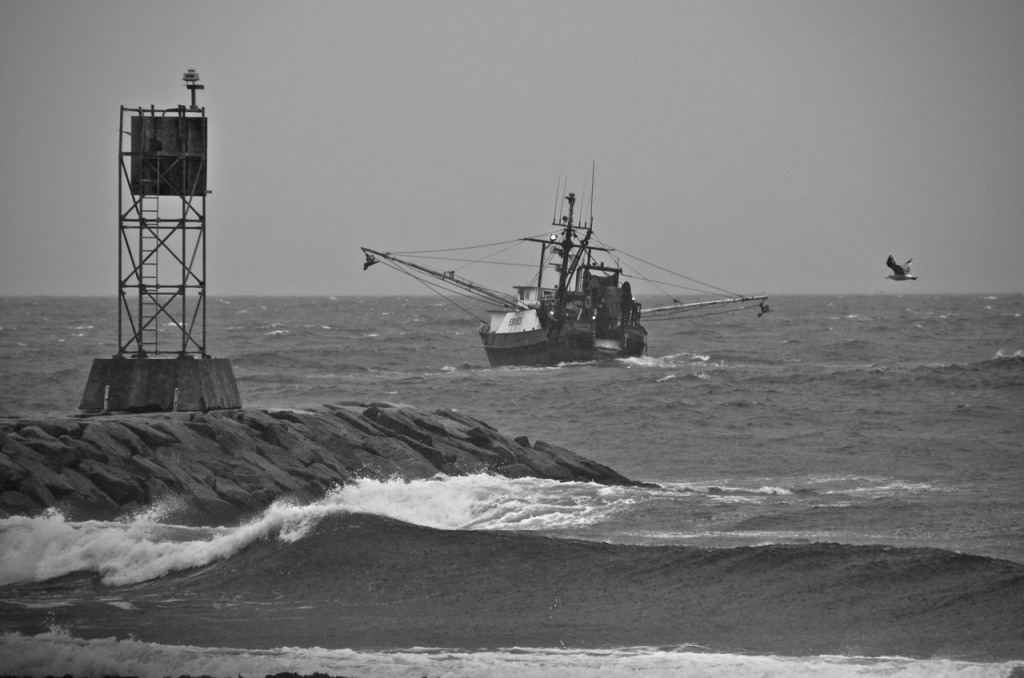 We talked with a local fisherman about this year’s fishing season.  He said it wasn’t the cold temperatures that bothered him, but it was the high winds that had dispersed the schools of fish and scallop beds. The fishing boats were now having to travel farther distances to gather up the scattered fish. 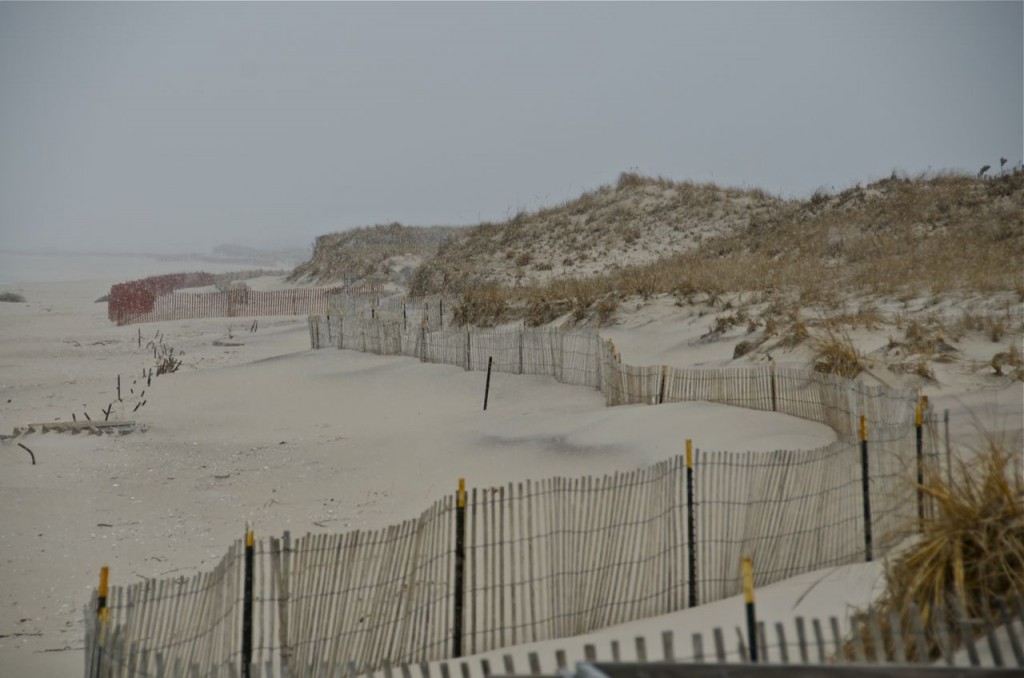 It was a blustery day and then it began to snow. At first the flakes fell so softly that it was hard to see them, and then a generous drift of snow began to fall. Later in the afternoon there would be larger flakes though in the end they would only add up to a scant inch or two. But at that moment, standing on the beach, when the snow first began to fall with only the sound of crashing waves or the lone call of a seagull gliding over head we experienced one of those beautiful take away moments, a wintery kiss. 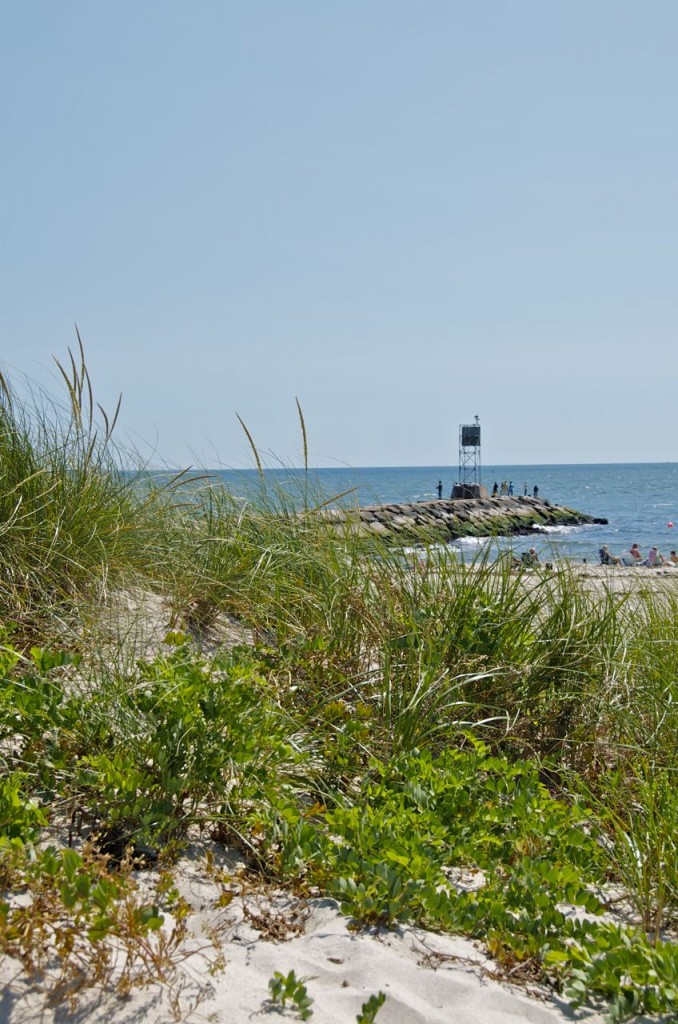 But as beautiful as this snowy moment was, I longed to step onto a warm beach, to dig my toes into the sand and let the warm breeze push at me. I wanted to see people again in shirt sleeves fishing and children building fickle sand trenches at the water’s edge. 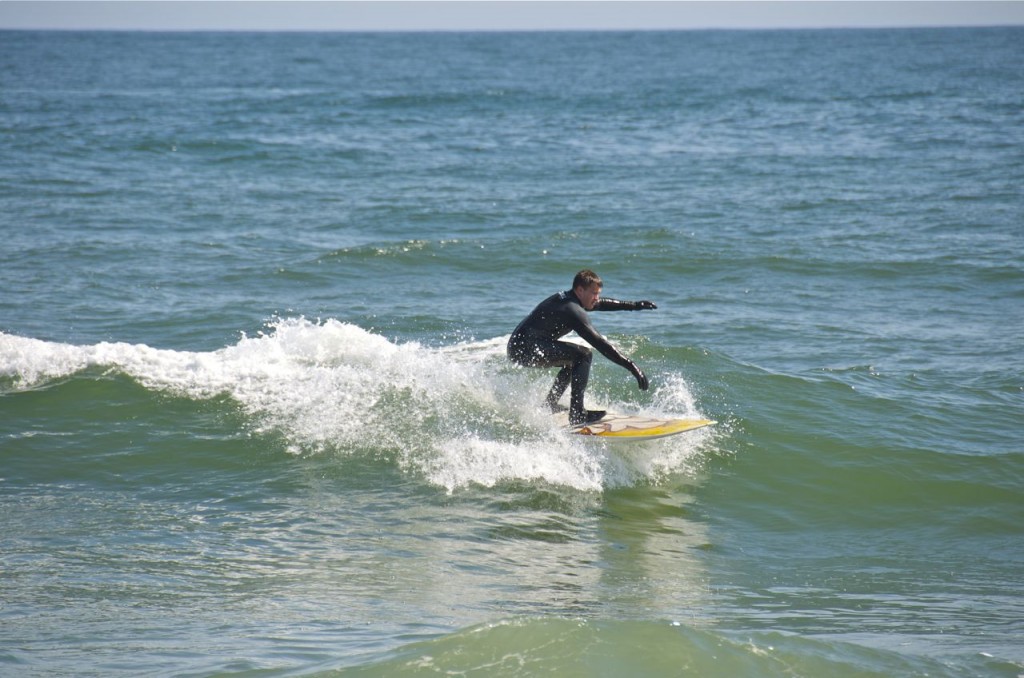 I missed the surfers decked out in black rubber suits skimming across the water. They play in the waves nearly year round but not on these freezing days. I imagine they’ve migrated to Fiji or some warm crusty island in the Indian Ocean but they are not in these cold waters of Long Island. 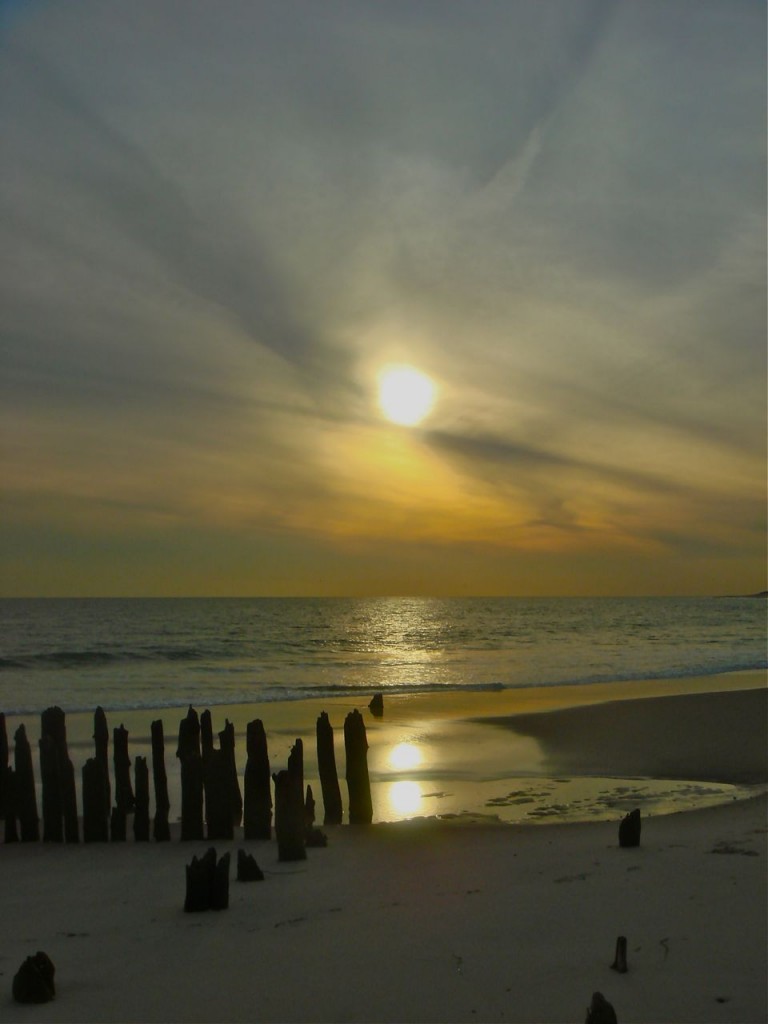 I missed the summer sunsets, those unpredictable evenings when the sun’s glare is tamed and subdued by a sheet of lingering afternoon clouds. 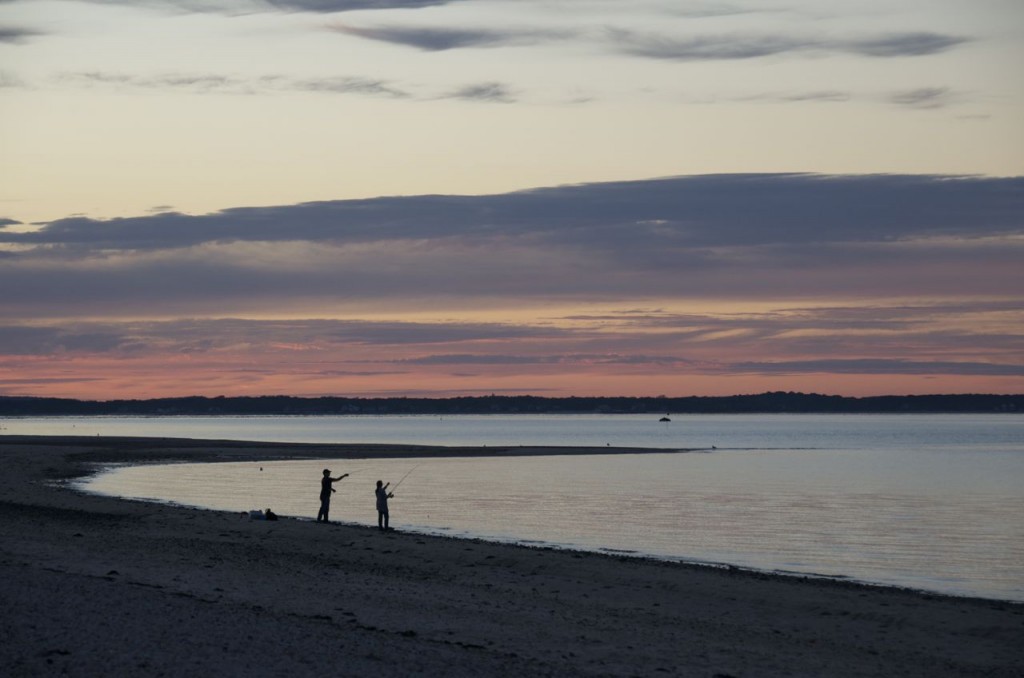 I looked forward to the magenta streaked sunsets and watching the hopeful fisherman stand on the shore casting a line into the water. It doesn’t seem anyone is too upset with not catching a fish, but on an evening with the light as lovely as this was, who will remember that they carried home an empty bucket. 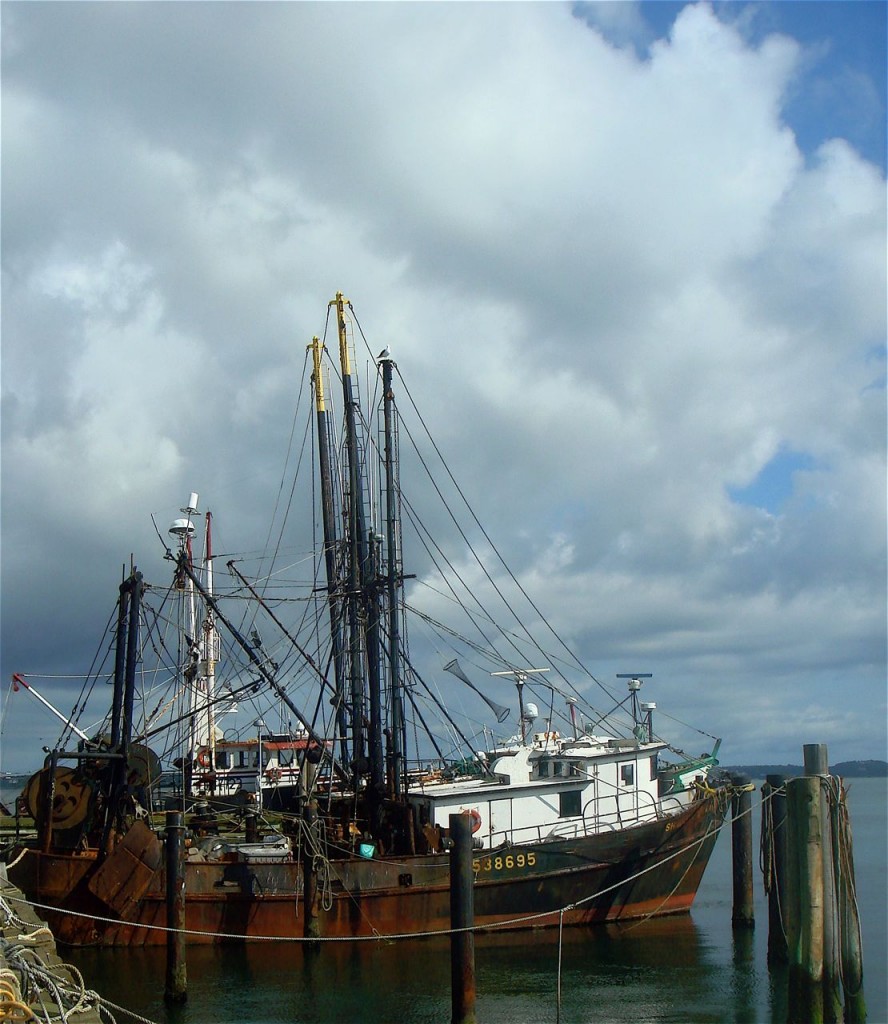 I looked forward to standing on the dock where the local fishermen park their boats after long days out at sea. The sky always changing, the salty water rocking the vessels, the heavy fishing gear clanging together making a sailor’s music. 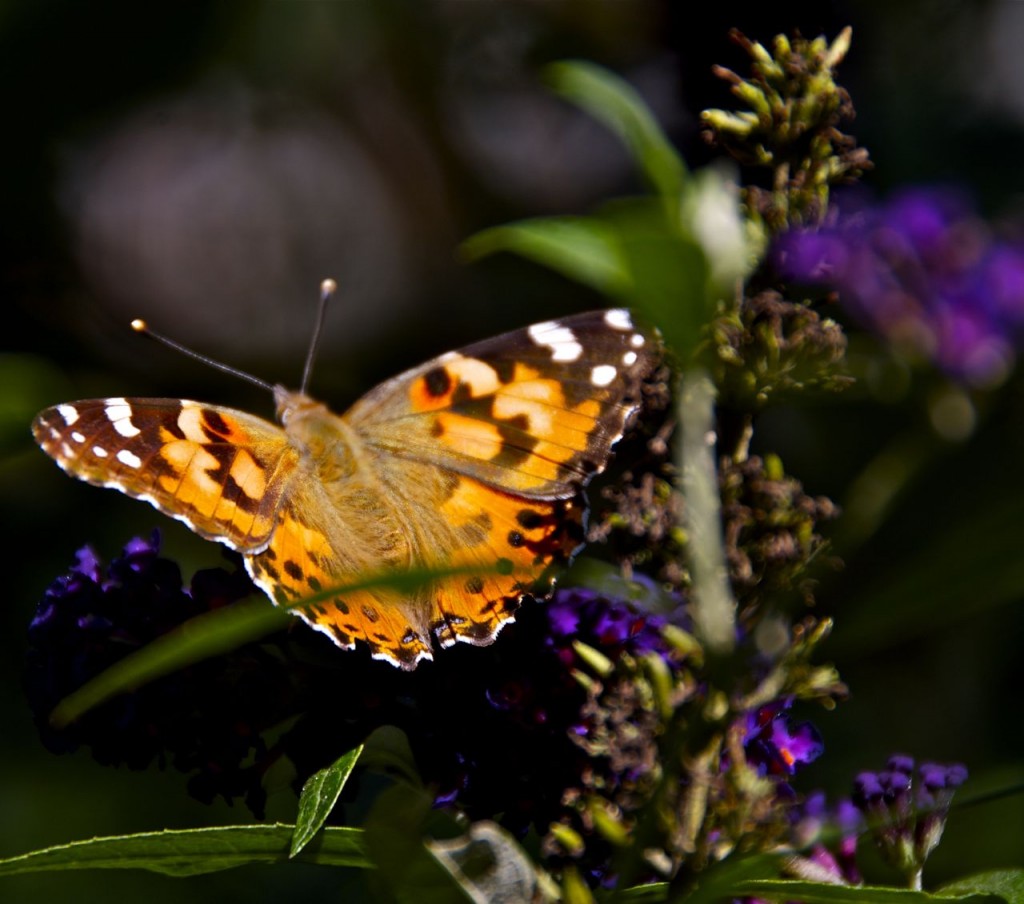 I looked forward to the deep summer months when the monarch butterflies use Long Island as a stop off spot during their unimaginably long migratory journey. 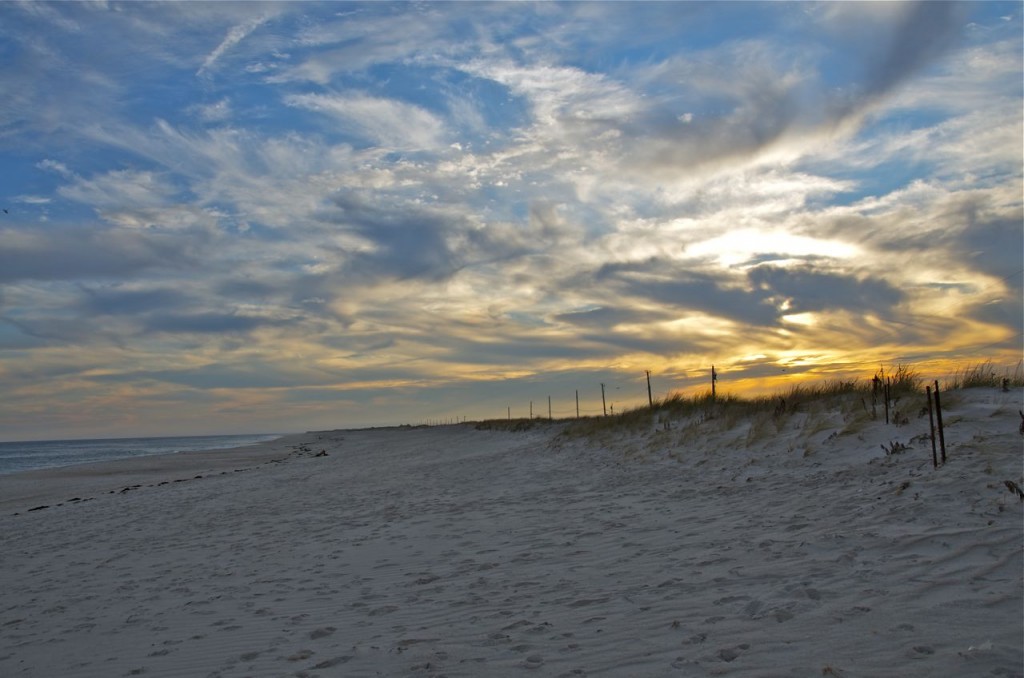 I looked forward to the time when I can sit on the beach, waiting for the evening light and cloudy sky to tumble and churn together. But for now I’ll have to be content with a short walk on a freezing windy beach and then run back to the car where I have a warm cup of  coffee waiting and watch seagulls bracing themselves against the blustery weather.

← WINTER WALK IN THE PARK
THE CITY THAT KEEPS SMILING →

5 comments for “I HEAR THE OCEAN ROAR”