Our grandson, Devon, was staying the weekend and that meant we awakened early each morning, usually before the sun comes up. I’m a light sleeper and when I hear the padding of his ever growing feet coming down the hall, I know that our day has begun no matter what time it is. Either I or my husband gets up and for an hour or so he and I take turns hanging out with Devon and do what we call ‘tag teaming’. Eventually the light breaks and the day looks like it will be lovely considering it was the first weekend of March. From our windows we see that the morning is a brilliant blue with only a few ragged soft white clouds hanging lazily in the sky. 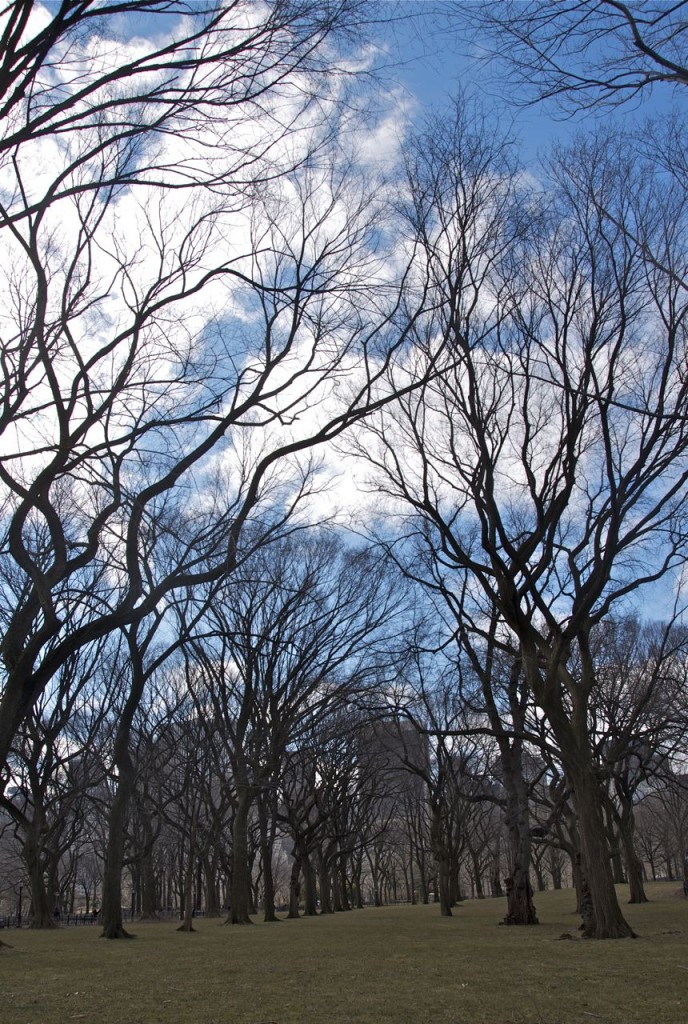 This would not be a day to waste on computer games or lazing around watching the Saturday cartoons and we decided to head out to the Central Park Zoo. The trees in the park are still quite stark and dormant looking though the ground, from a distance, looks like it might be covered in a green fuzz. The warm morning air made me feel hopeful that Spring would be here soon. 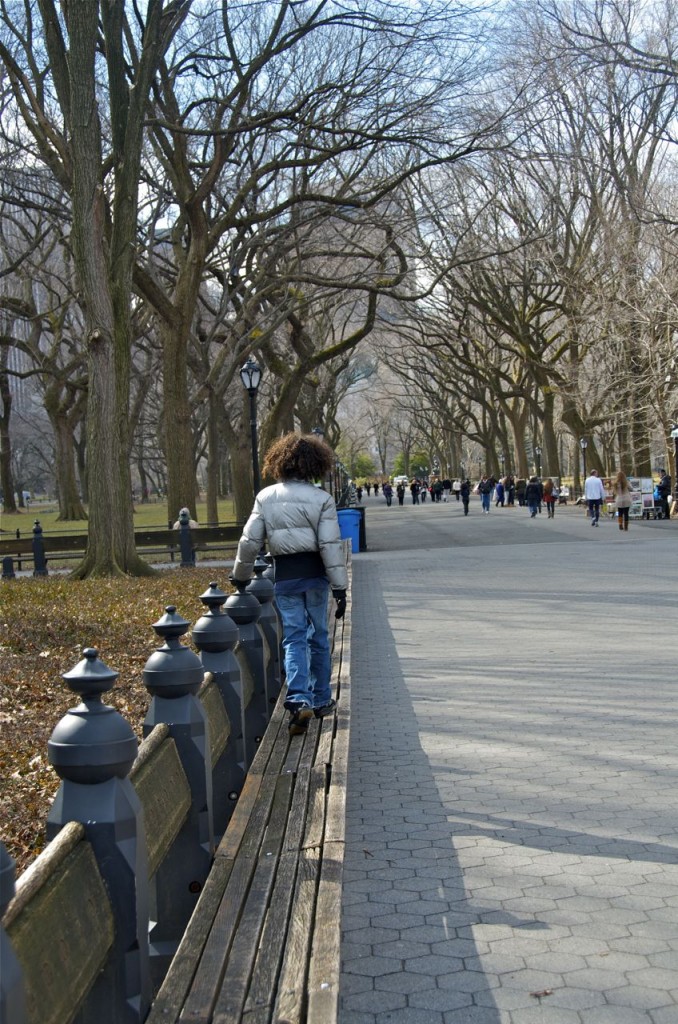 Our grandson has taught us how to go slower, how to look at the world with another set of eyes. My husband and I used to be a lot more cranky when we were parenting our young children. I suppose we were too young to see the mysteries that our children saw, the wonders that pulled them in one direction and then another, always making us calling after them to come back to follow our lead. But I suppose now that we are much older and we’ve slowed our pace, we can watch and be with our grandson in a different way than we were with our children. We can let him take his own route, his own way of exploring the world and we can stop when he stops to look up trying to find that lone bird singing in the winter tree. 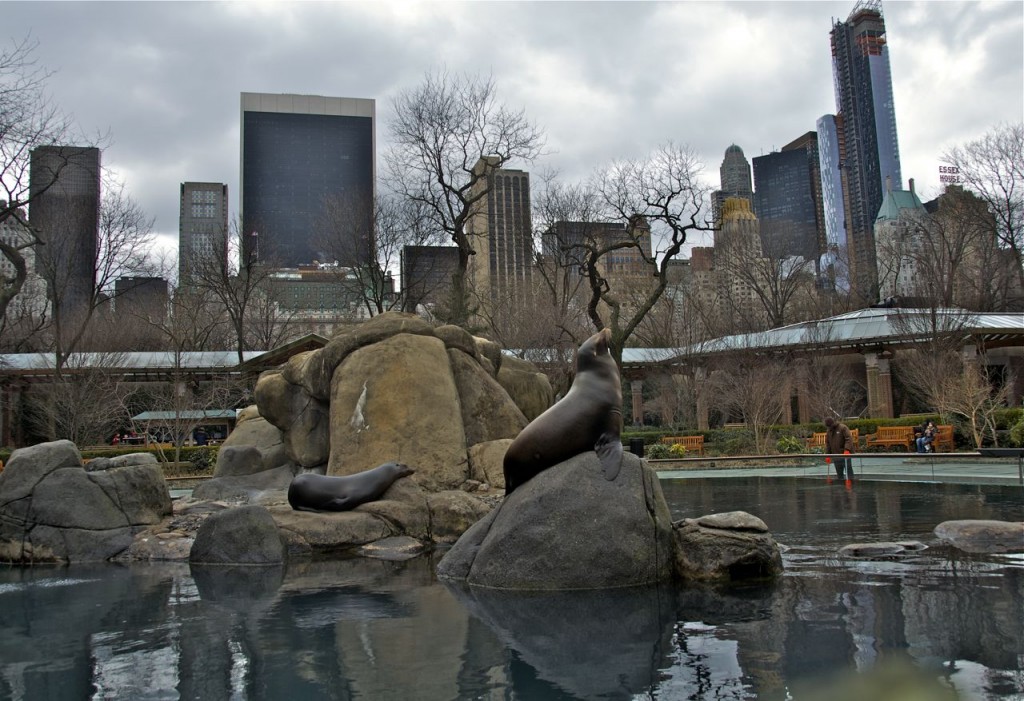 By the time we finally reach Central Park Zoo the sky has tuned gray, filled with threatening clouds and a chilly wind has begun to blow. We arrived too early to see the seals do their tricks and eat the fish thrown at them. We stood for a while looking at the seals swim in circles watchful for their handlers. And it was at Devon’s suggestion that we go to the cafe to have a hot cup of cocoa. This is a small zoo with less than a dozen aquatic and land animals on display, but for Devon it’s always been the seals that he likes to watch. So after our hot drinks we return to the seal pond in time to watch them being fed. We stand around, marveling at these creatures that have learned to jump and dance and catch a frisbee all the while they hardly take their eyes off the zoo keeper’s bucket filled with fish. And when the tricks are over, the fish bucket is empty and the keepers have left and locked the gate behind them, the crowd moves on with toddlers climbing back into their strollers, some getting cranky in this cooling changing weather.

But Devon wants to stay a bit longer. He wants to watch what the seals do when there’s no fish on the scene. He points to the one seal that has gone to sleep using a rock for a pillow while he seems to think that the bigger seal is standing guard. This is a solitary moment at the seal pond. The clapping, laughing viewers are nowhere in sight, the grounds keeper collects the discarded trash left behind by the careless visitors and in this cold wintry moment nothing moves across my lens, not even a seal. 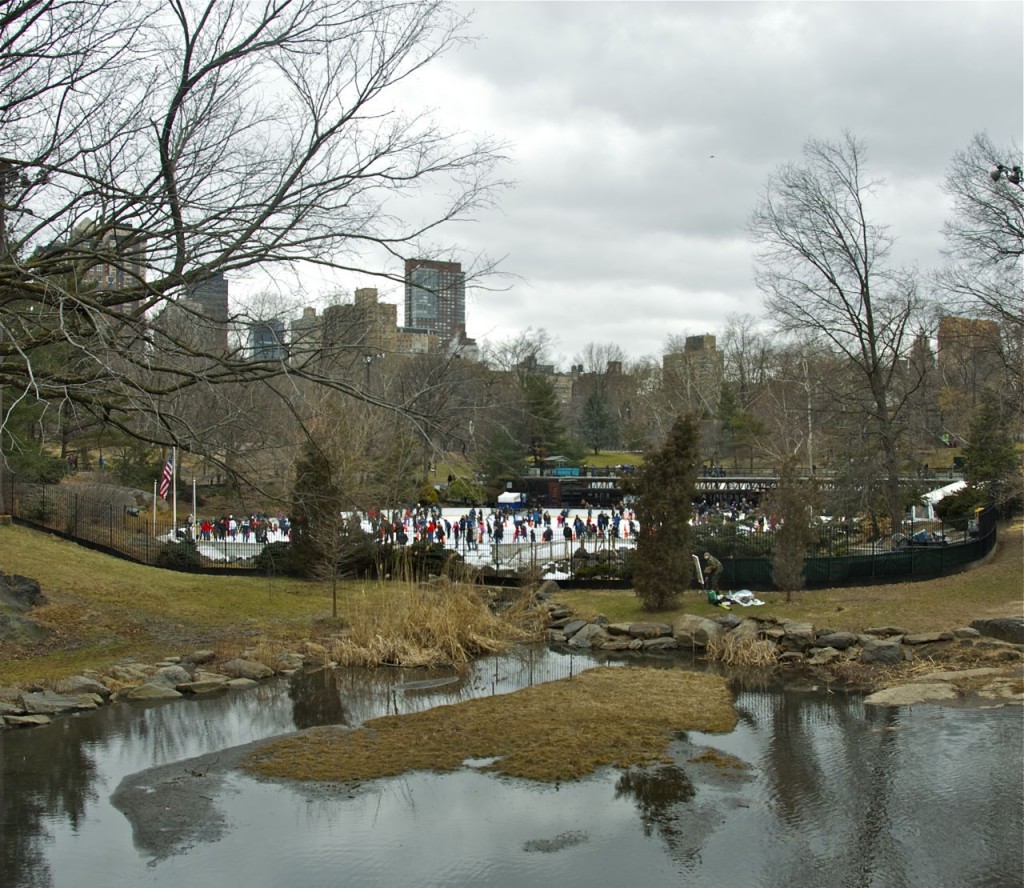 Because we are with Devon we take a trail that we’ve never taken before. My husband and I stroll weekly in the park but we have our directions, we have our destinations, we have our routines. But Devon wants to cross that bridge, sneak through that fence, climb that rock mountain and we follow where we can, or wait until he returns from his explorations. Devon has been to this skating pond before he tells us. He asks us if we want to go skating. I say no, two bad ankles. Grandpa says no, not today. So we stand and watch all the while the sky gets meaner looking and the wind blows more seriously, rippling the pond below. 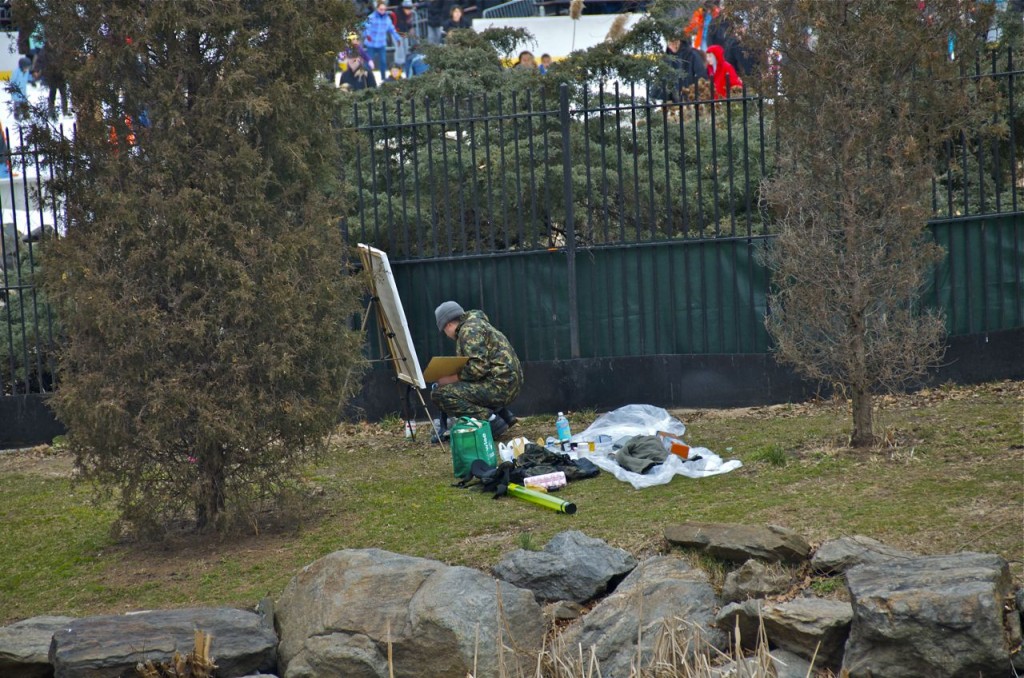 And then I see that a painter has set up shop in the far corner of the skating pond. Dressed in a camouflage jumpsuit, a stretched canvas on an easel, it looks like from all the gear that’s spread out on the ground that this is going to be a serious work day. 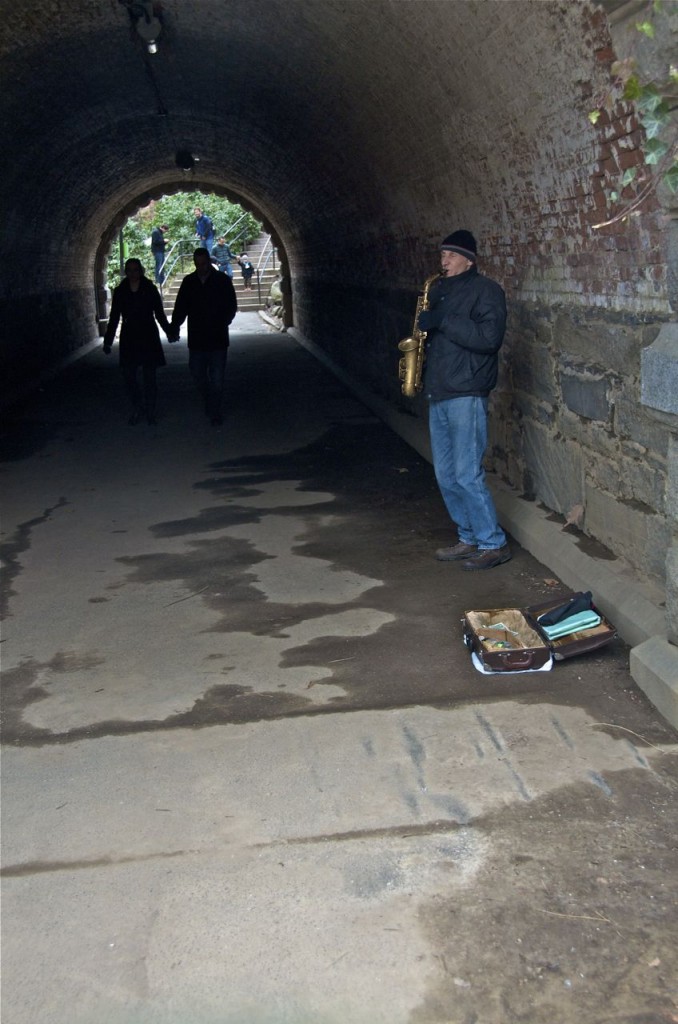 We stop and listen to a musician playing his saxophone in a tunnel. Almost every tunnel in the park has a musician standing at one end or the other. The acoustics are fantastic, the music haunting, drawing in listeners and always worth a buck or at least the spare change sitting in the bottom of a pocket. The day had become quite cold and a flurry of snow began to fall. We had a bit more of a walk before we were out of the park and could catch a bus to go home where we were then going to head over to our favorite place to get a hamburger. 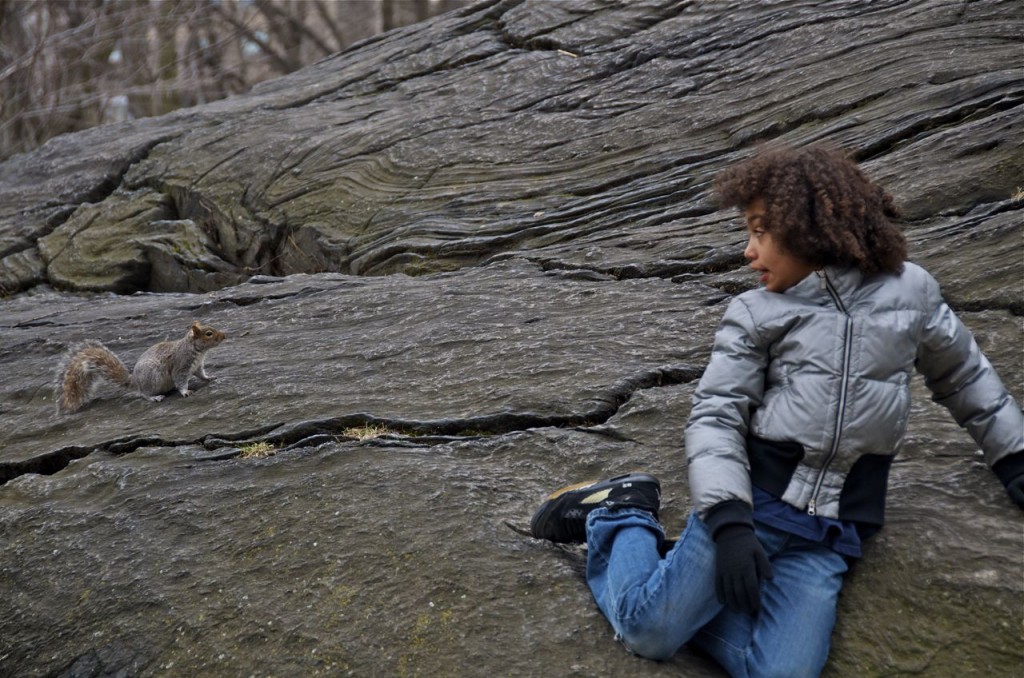 But first Devon had to sit and talk with a squirrel!!! 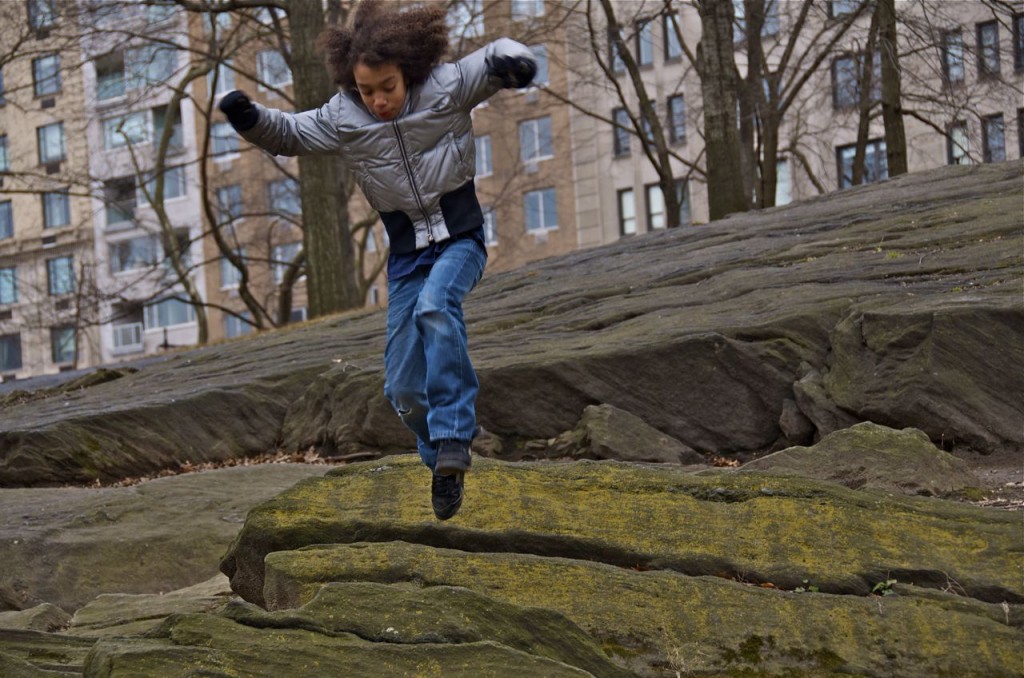 And then he had to jump off of a big rock!!! Ah, then we could go home.

7 comments for “WINTER WALK IN THE PARK”