I promised myself that I’d go back to the Kara Walter’s “A Subtlety” instillation in the central refinery building of the Domino Sugar Factory. And I am so glad that I did. Unlike the cloudy and misty day the last time I’d tried to get into the instillation, this time the weather was a beautiful early NYC summer day. 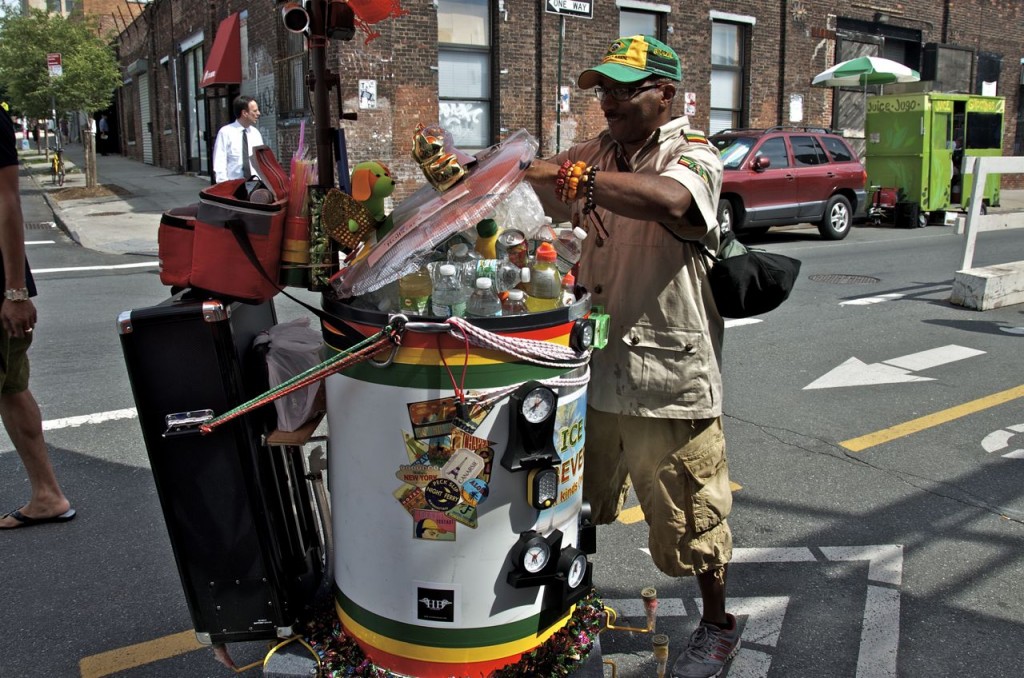 We got in line early like the guard told us to do. We got there even earlier than we had anticipated because the subway was very cooperative. We thought we’d be the first in line, but when we got to the entrance five people were all ready ahead of us. While we waited a jovial vender came by selling cold beverages and snacks. 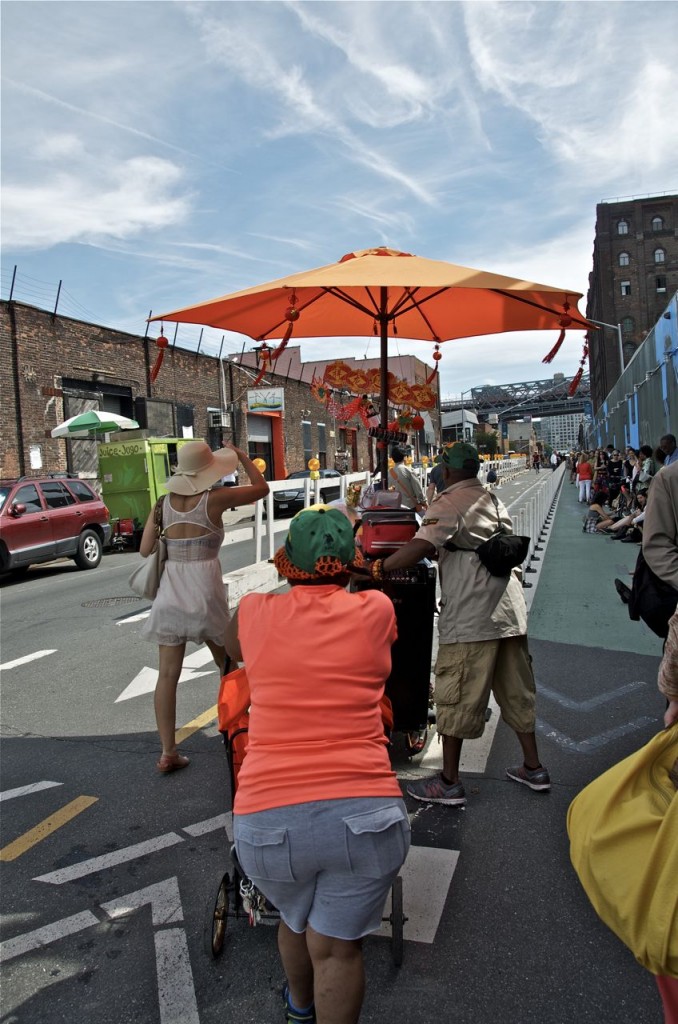 It didn’t take long for a the line behind us to grow and though we had over an hour  to wait, the people behind us would have an even longer wait because they only let in about 150 people at a time and there had to be about 500 or 600, maybe more, people in this line. 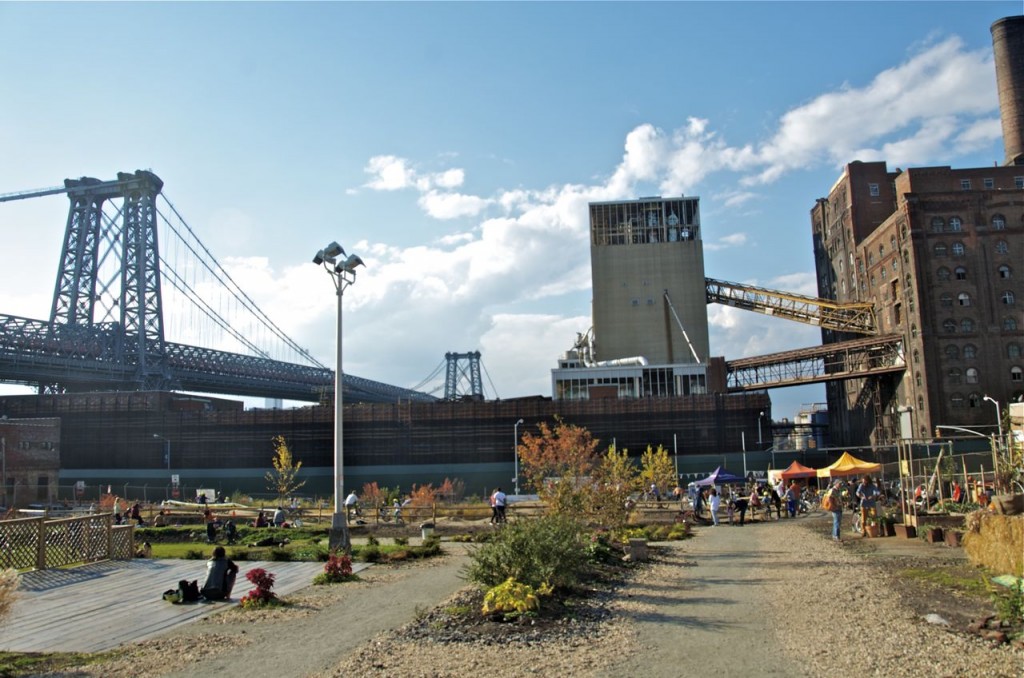 Until now I’ve known very little about this place. The factory was built in the mid 1800’s and by the end of the Civil War it had become the largest sugar refinery, processing three million pounds of sugar each day, more than half of the sugar consumed in the entire country. The factory was closed in 2004 and is now in the hands of developers who will turn the main building into condos, and the building that was once the central refinery into office spaces. There is some talk about the possible construction of a cultural hub as part of the full development package. They still have a long way to go, with the demolition of the old buildings, and the cleaning of the buildings that will be rehabbed. There is an entire block of land owned by Domino that has been turned over to the Williamsburg community on a 15 year free lease to provide entertainment and comfort to the community while all this work is going on. A community garden has been established on one end of the block and on the other end there is a dirt bike recreation area. Admission is free, bring your own bike or rent one for a small fee. 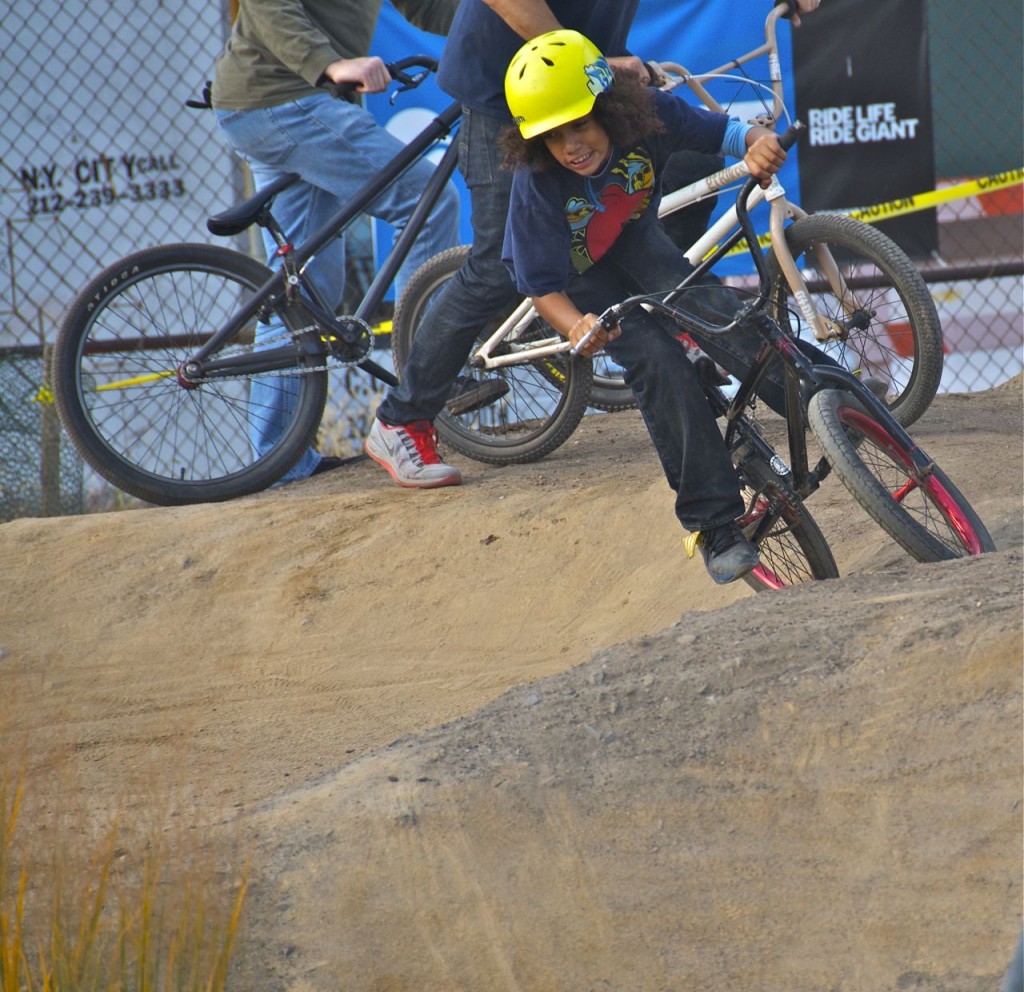 Last year my grandson had his birthday party at the dirt bike park. What could be more fun than pizza, brownies and being able to hop on a bike and peddle until your legs are numb. 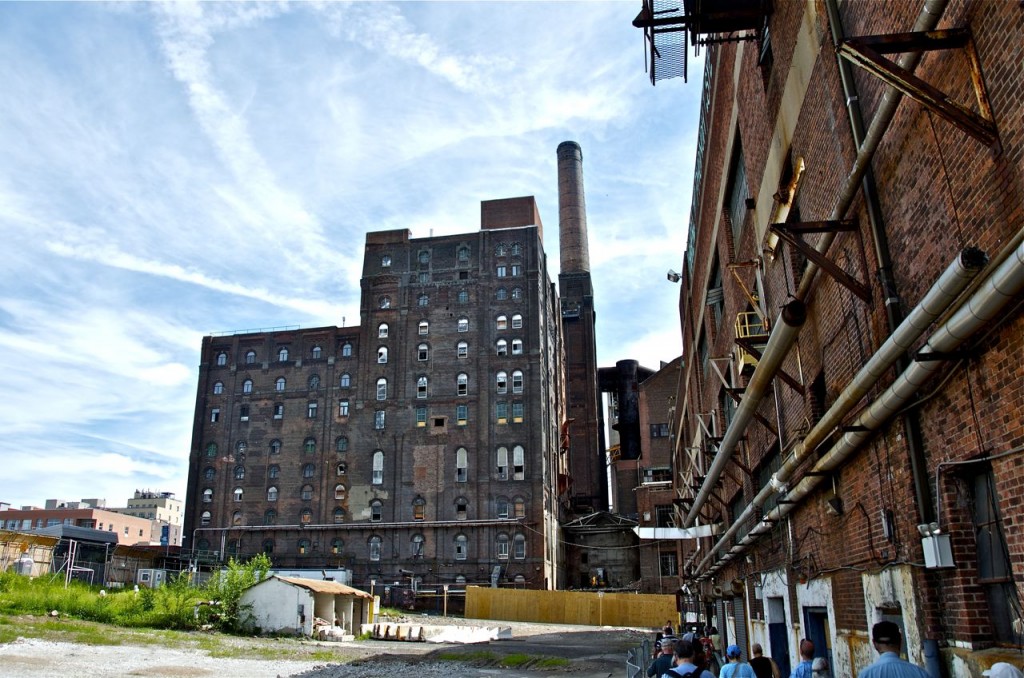 Back to the Kara Walker instillation. As we walk toward the central refinery building where the instillation is on display, we were greeted by these words: “AT THE BEHEST OF CREATIVE TIME, KARA E. WALKER HAS CONFECTED A SUBTLETY OR THE MARVELOUS SUGAR BABY AN HOMAGE TO THE UNPAID AND OVERWORKED ARTISANS WHO HAVE REFINED OUR SWEET TASTES FROM THE CANE FIELDS TO THE KITCHENS OF THE NEW WORLD ON THE OCCASION OF THE DEMOLITION OF THE DOMINO SUGAR REFINING PLANT” 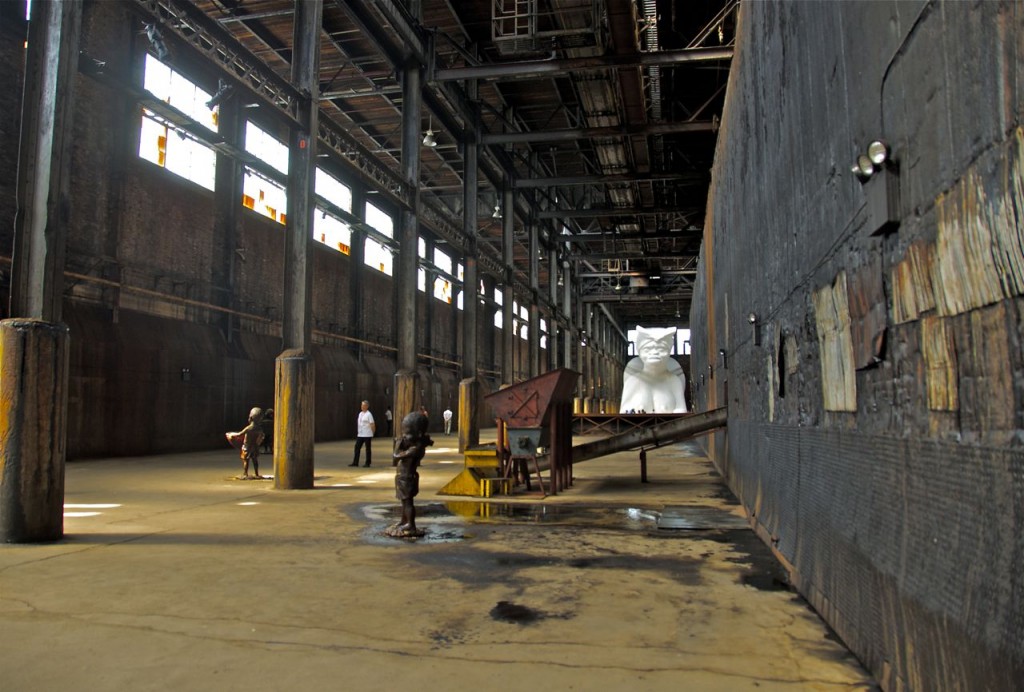 I’ve seen photographs of this exhibit but nothing compares to seeing it in person. The place has an odd burnt sugar, musty, rusting metal smell. I’m sure the walls are coatedwithn the sweet stains of sugar. Light pours down onto the exhibition from windows that are at least 30 feet over head. A few pieces of machinery have been kept as part of the exhibition. The Sphinx is at the far end of the building and she looms large and white rising up through the floor, ghost-like. Smaller child figures, Sugar Babies, are scattered along the walkway to the giant female sculptuer. 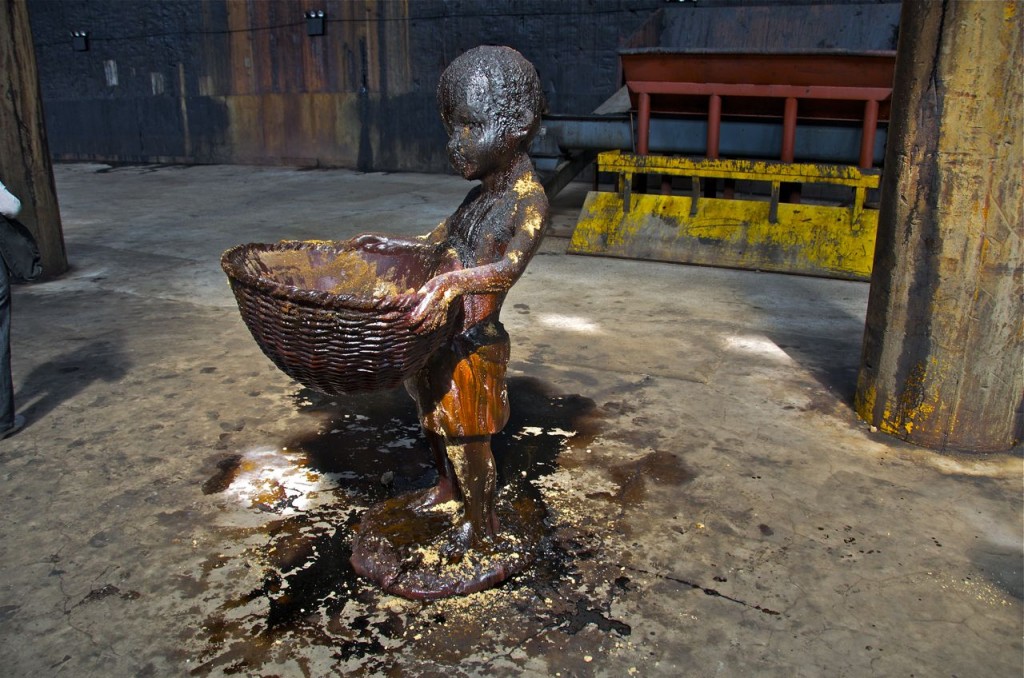 There are fifteen ‘sugar babies’. They stand 5 foot and are replicas of antique figurines that Kara Walker has collected over the years. A few of them are constructed from a mixture of sugar and corn syrup that was cooked to 300 degree Fahrenheit and then poured into a mold. The rest are constructed of resin and coated with molasses and sugar. These figures are meant to make you think about the involvement of child labor in American industry. 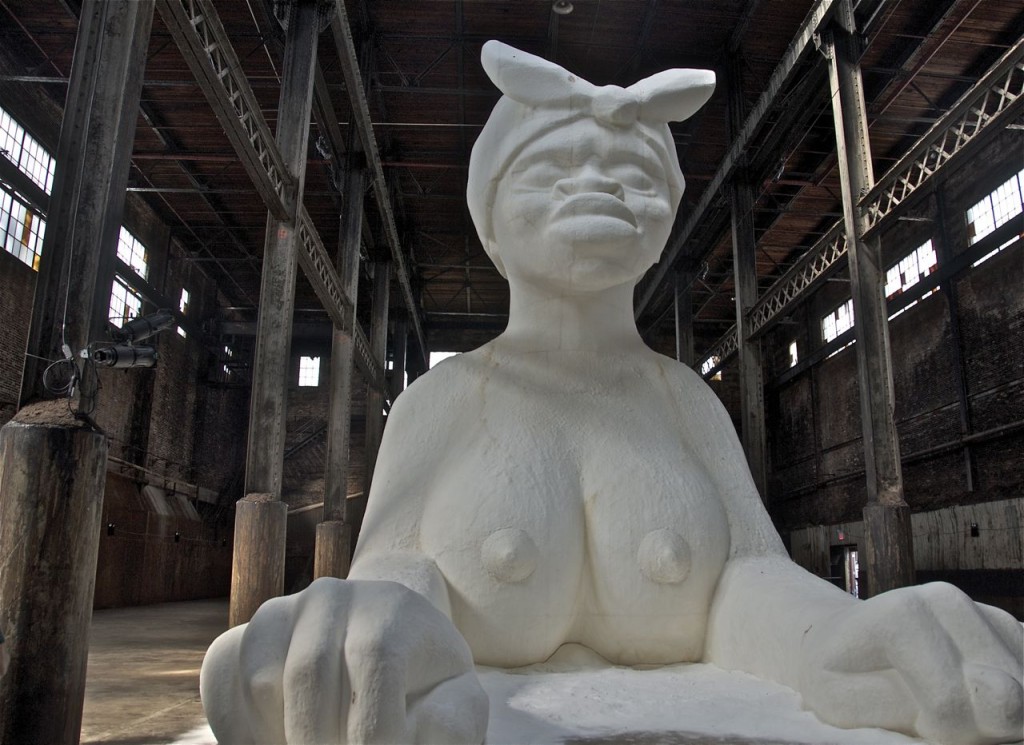 Standing in front of the 35 food tall, 70 foot long statue is an awesome experience. She is not only made of sugar, but was constructed from 300 blocks of foam and coated in 35 tons of sugar. A resin was spread over the sugar to help keep it in place. 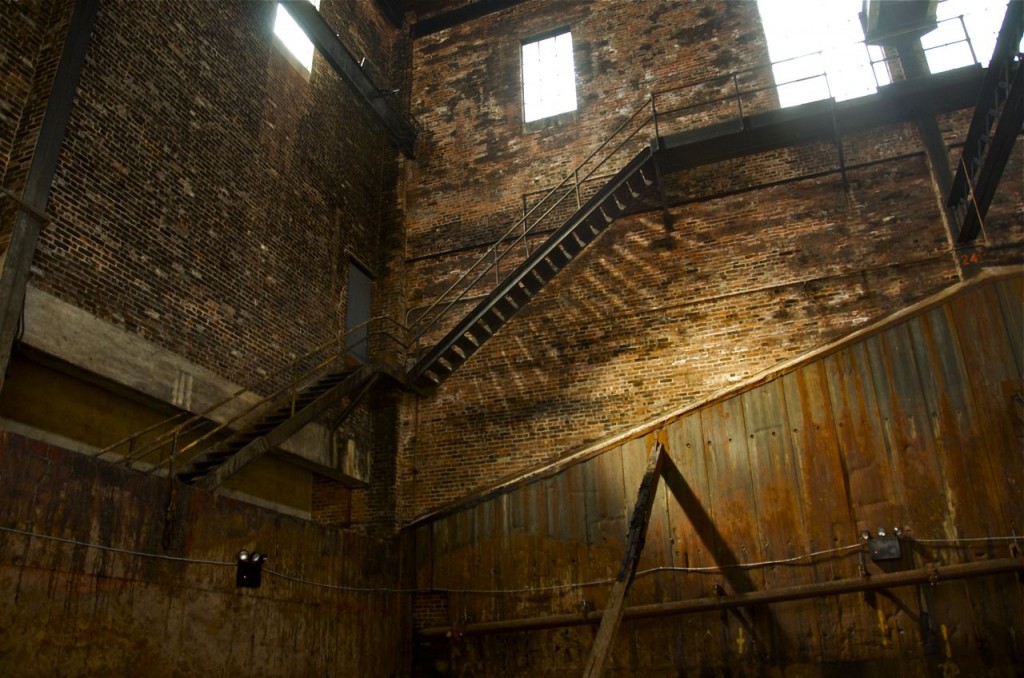 The building may have been cleaned up a bit to make it more presentable for the exhibition, but the aged brick and the rusted metal walls tells of the many years of use. The stairs and catwalks in one area must have a history of power and authority, but in the softening afternoon light forms a beauty of its own. 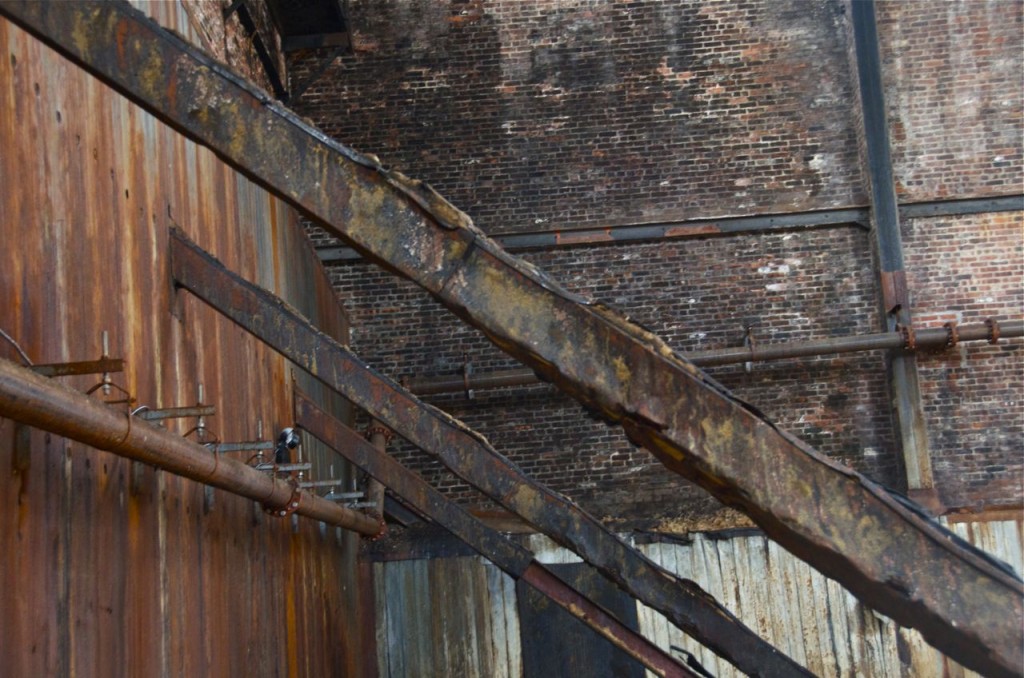 A cool, bitter-sweet smelling breeze blew in though the cracks in the brick as I walked along the walls. 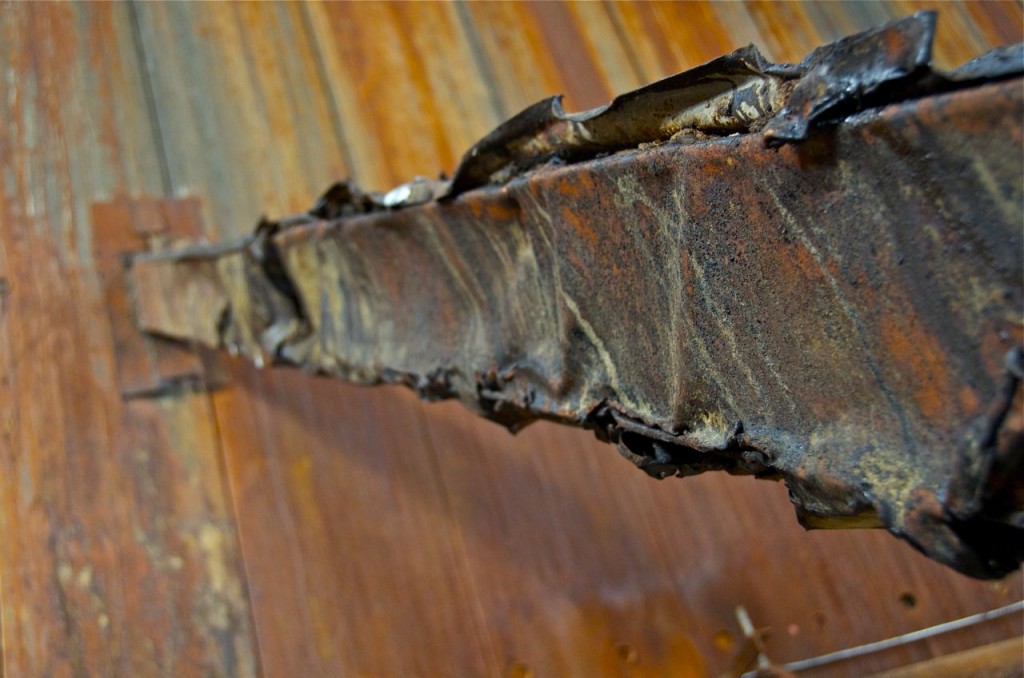 Here is a close up of one the rusted wall braces. 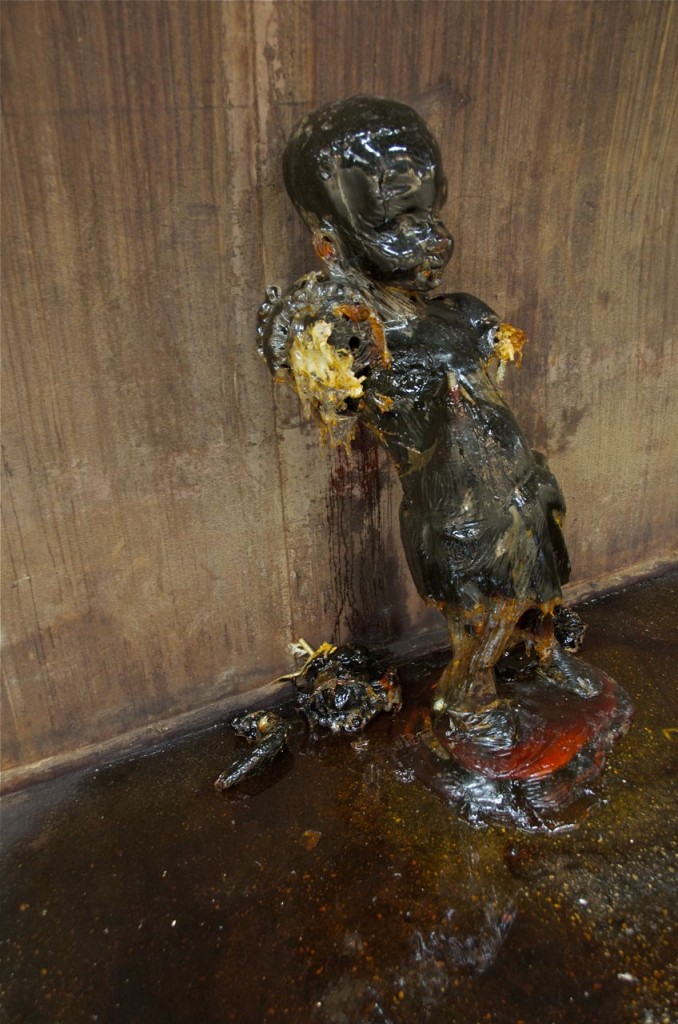 Some of the sugar babies were melting and falling apart. I suspected these were the ones made of the sugar and corn syrup mixture. 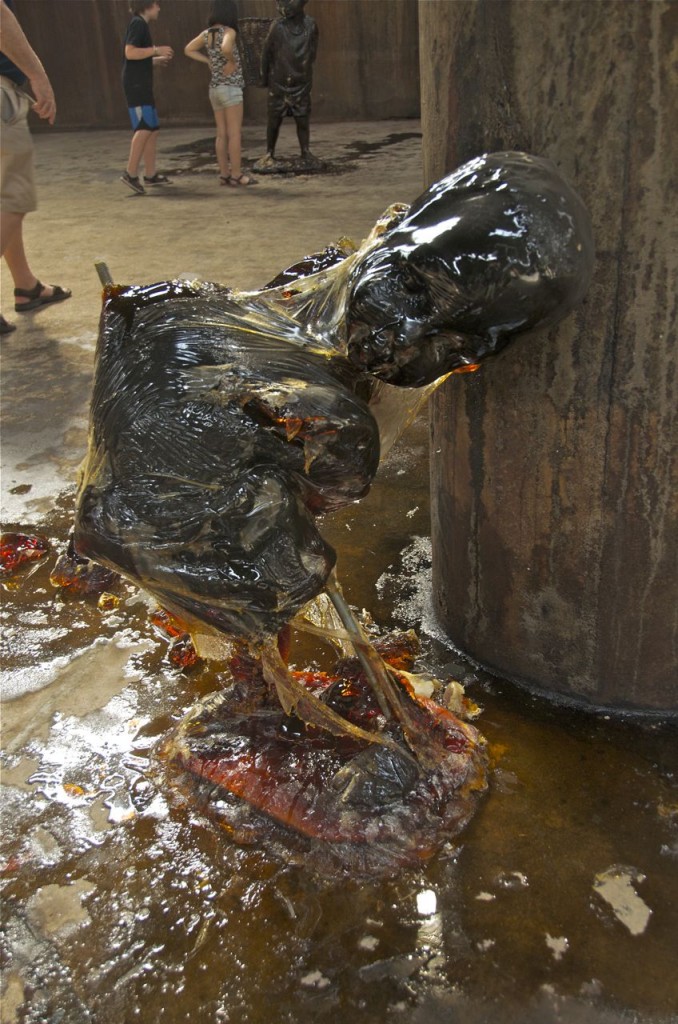 The strange and extreme poses of these melting sugar babies were often disturbing. 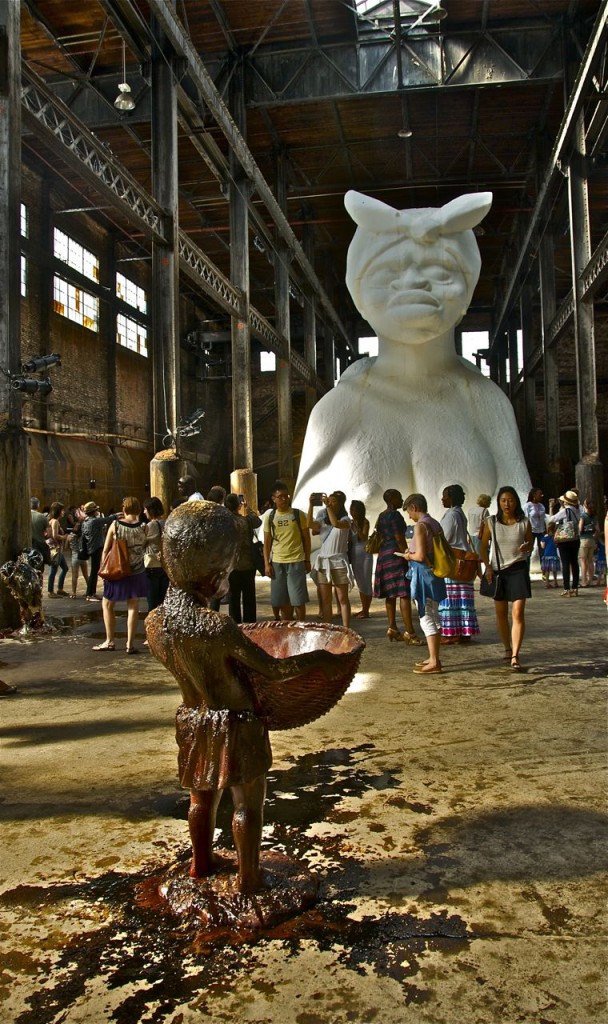 The sugar babies that were made from resin appeared to be slowly melting, also, sentinels of our history, carrying baskets of  melting burnt sugar and molasses. 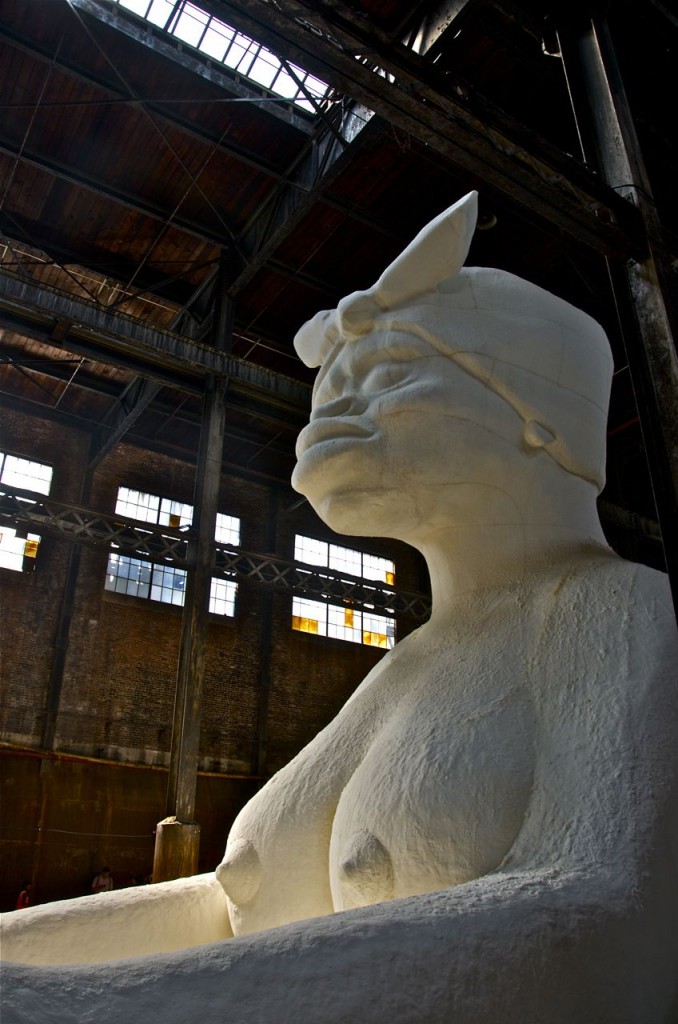 This is a profile of the Sphinx. You can see where she has been pieced together, and as the afternoon sun streamed down on her, the texture of the workmanship became more evident. 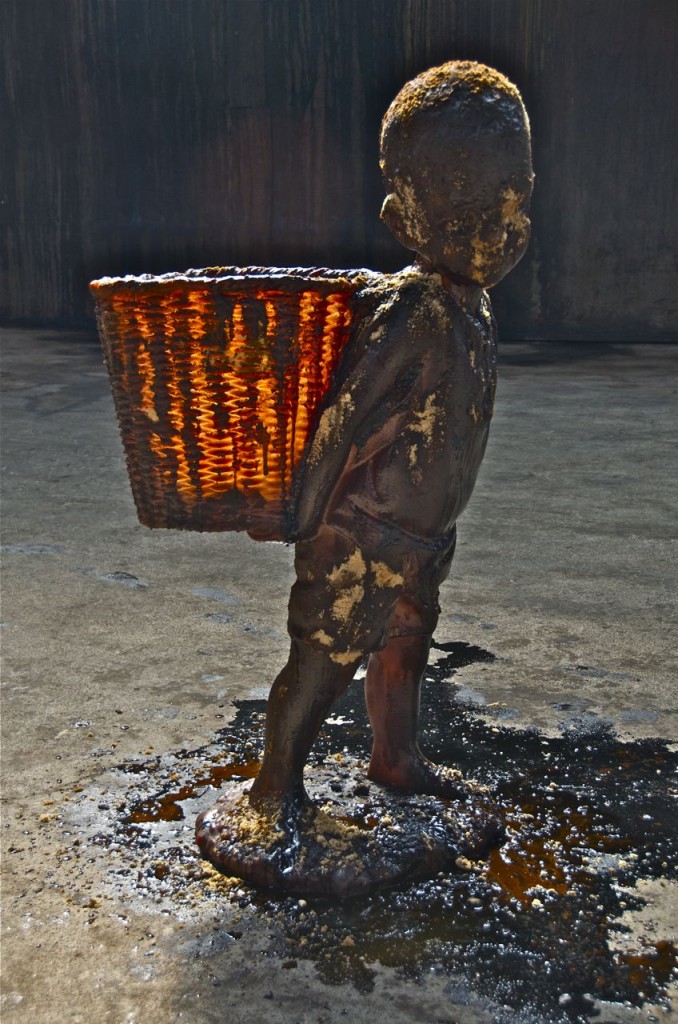 The instillation was worth every minute I waited in line. At one point I felt my heart break when I saw this child’s figure standing in the sunlight streaming down from the windows overhead. 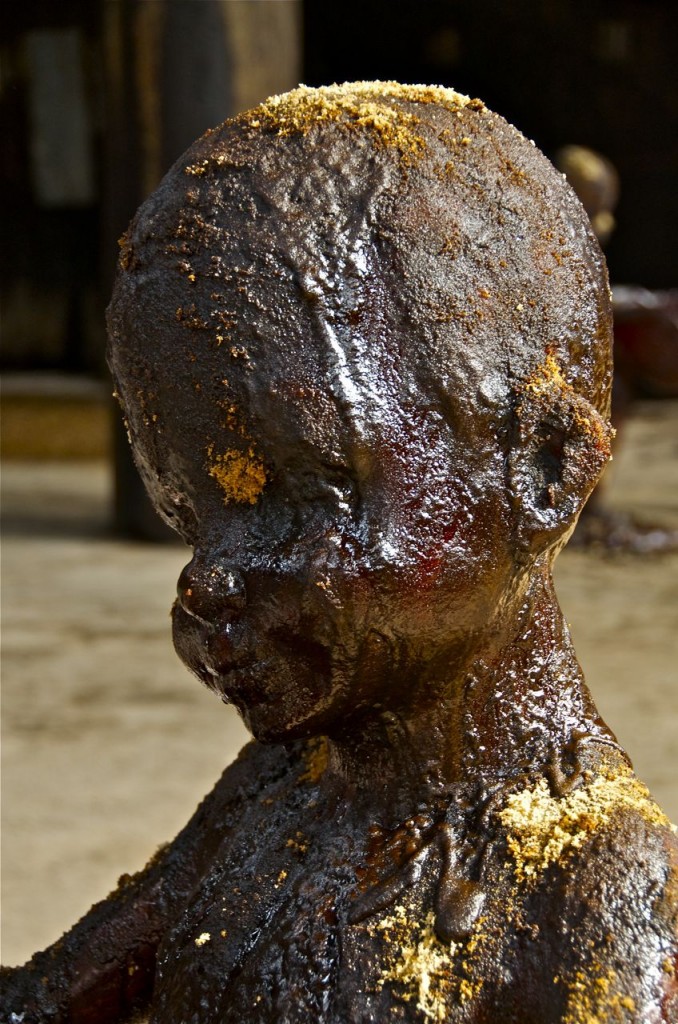 Here is a close up of one of the sugar babies, one that was most likely modeled in resin and coated in sugar and molasses. 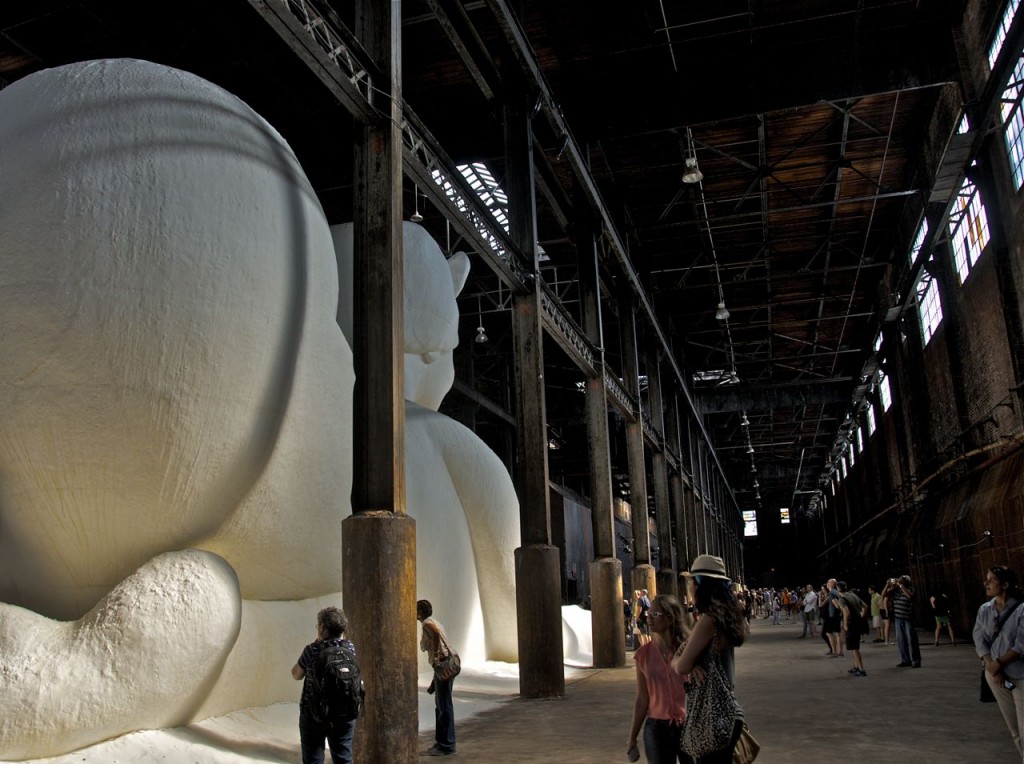 This is the full figure of the Sphinx. The statue faces the entrance, while her backside is at the exit. I stayed in the refinery for an hour walking around, talking with people, taking photos and experiencing the power of Kara Walker’s concept. I read again the first section of what was written on the outside wall as we entered the building: “An Homage to the unpaid and over worked artisans who refined our sweet tastes from the cane fields.” I thought about the molasses cookies my mother made when I was a little girl. Then I realized that this old building had a slight smell of that spicy sweet pastry. Mom used a blackstrap molasses in her cookies, which is the term used to refer to the 3rd stage of boiling the sugar by-product, that produces the darkest and thickest of the molasses.

I shuddered when I made the connection between a cookie from my childhood, the blackstrap molasses my mother used, and the Sphinx and the Sugar Baby figures. Art is amazingly powerful, sometimes subtle, sometimes not so subtle, but it was the smells in the building and my memory of the name of the type of molasses, blackstrap, that pulled the picture of slavery together for me. The name black-strap molasses was not a name thought up by a marketing company, but was the end product of abused and mistreated humans.

← WALKING ACROSS THE WILLIAMSBURG BRIDGE
I’m on a writer’s blog today! →