It was finally the end of summer. Well, it was Labor Day weekend, that’s pretty much the end of summer. Though we knew there would still be a few hot and muggy days before we talked about the fall chill in the air. It was still time to take a break from the humid air of the big city life and head for the seashore. My husband would close shop for a couple days, after all most of NYC was out of town. My time away from “the office” is different from his. I’m a writer. Even though I say I’m leaving my work at home, that writer part of me is always tagging along wherever I go. 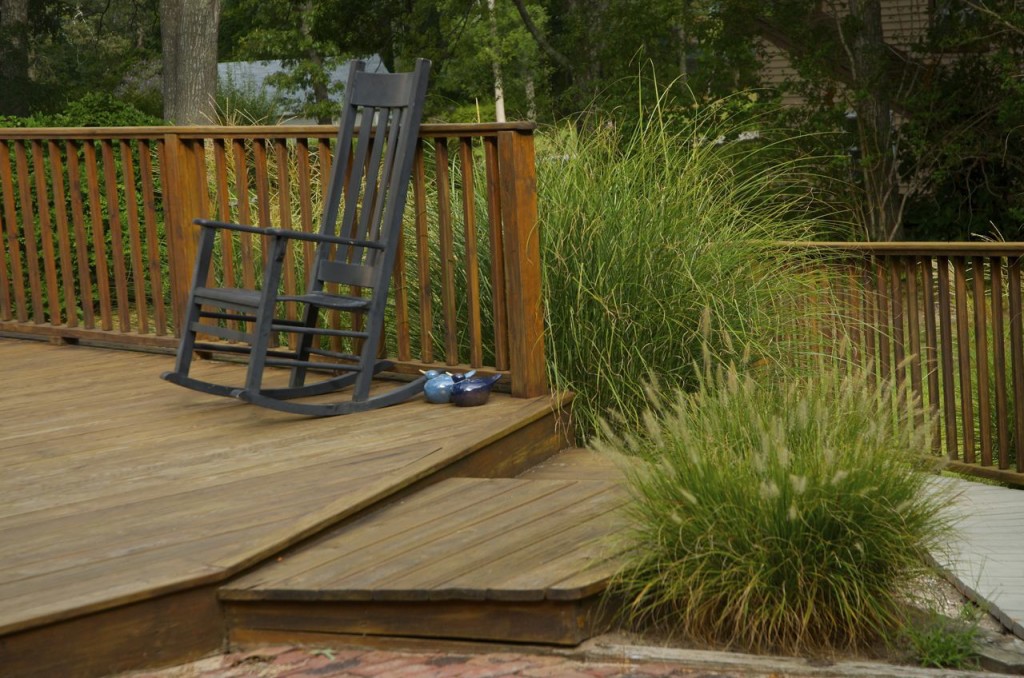 But this would be a different kind of vacation. The family beach house, a place where we’d spent many wonderful summers, had just been sold. It would be our last weekend in the old house and it was our turn to share in clearing and cleaning before the closing date.

As soon as we walked into the house, it felt different. It felt hollow. Not that much had been removed from the premises because the new owners had agreed to purchase most of the furnishings and household goods. But there was a sense of emptiness. The rooms were pretty much as they always were, though it was probably the sense of sadness that I felt. It was the end of an era.

It wasn’t enough that this was the last weekend we’d stay in the house, but a severe summer storm, Hermine, was making its way up the Atlantic coastline. And at 6 miles an hour, it was heading straight for our area. The sky was a brilliant blue with dramatic clouds lazily floating overhead. It was hard to believe that a storm was going to hit any time soon. 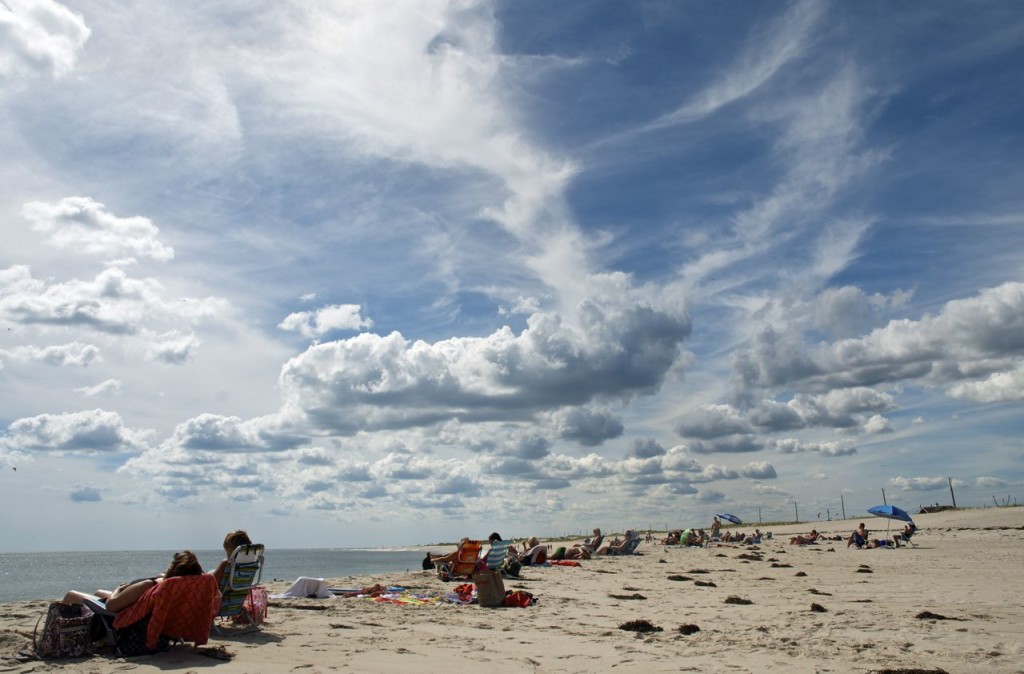 We weren’t the only one’s not too bothered by the impending storm. Beach goers, by the dozens, sat out of the reach of the incoming tide, seeming not to have a care in the world. Gulls swooped down and glided across the horizon. Fishing boats cruised out into the Atlantic, their skippers hopeful of still catching a big one so late in the season. And the ocean, as smooth as silken fabric, glistening in the late summer light, dazzling the lazy sunbathers.

We’d spent many summers walking these beaches, our footprints repeatedly erased by the rising and falling tide. I remember little burned patches on the backs and arms of my children where the water and sand wiped away the sunblock. The whimpering, the complaining child would have to be soothed by a bowl of fresh popped popcorn, a fudge icicle and a little extra time of watching television before they went to bed. 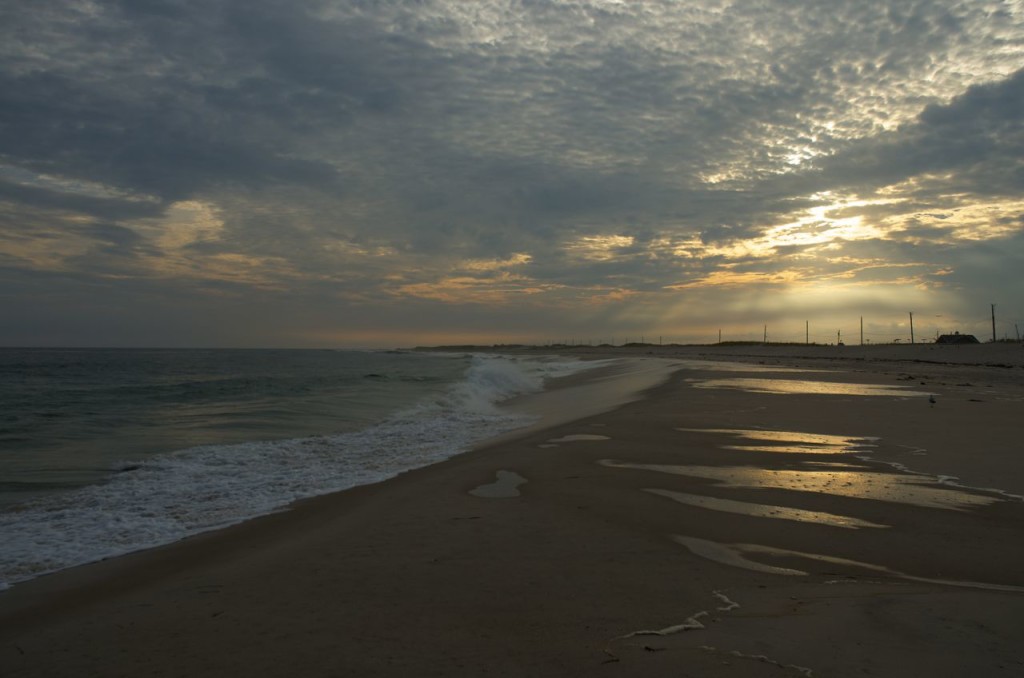 That evening we returned to the beach. The sun was beginning to set. The light is magical some days streaming out from above the clouds. It seems to slowly move, or hardly move at all, and then in an instant the light is gone. 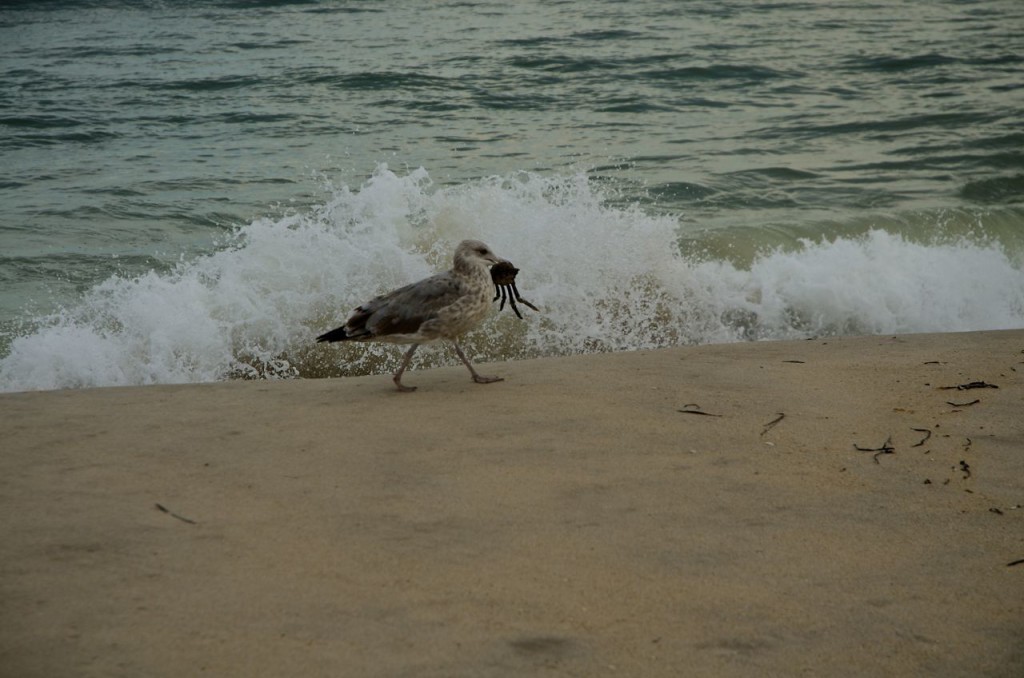 When almost everyone has left the area, the gulls have the beach to them selves. They scavenge for leftover tidbits that have been abandoned by the humans. There are also yummy offerings from the ocean, crashed by the pounding surf, juicy morsels are washed to shore. 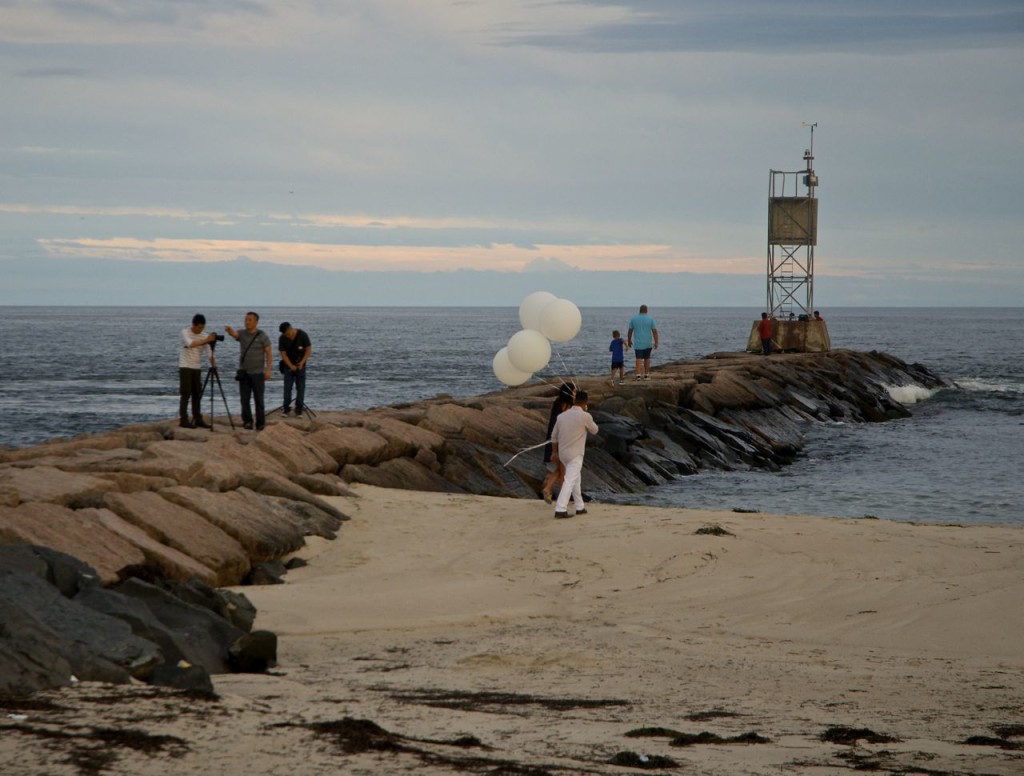 The evening light, just before sun set, is a photographers dream light. One evening we went to the inlet during this magical hour. The light was a delicious pink and the clouds were making wonderful designs across the horizon and we happened upon a photo session. The couple stood with their backs to the brilliant setting sun, giant balloons bobbing and swooshing around in the damp evening air. The young lovers hugged and kissed, while the photographer gestured and gave orders as though he were orchestrating the scene.

We had taken many photographs of family and friends standing on this very jetty. For years it was a go to location to document the wind, the friends, the excitement of a fishing frenzy. But this evening, this couple was documenting their memory in the gentle ocean breeze. 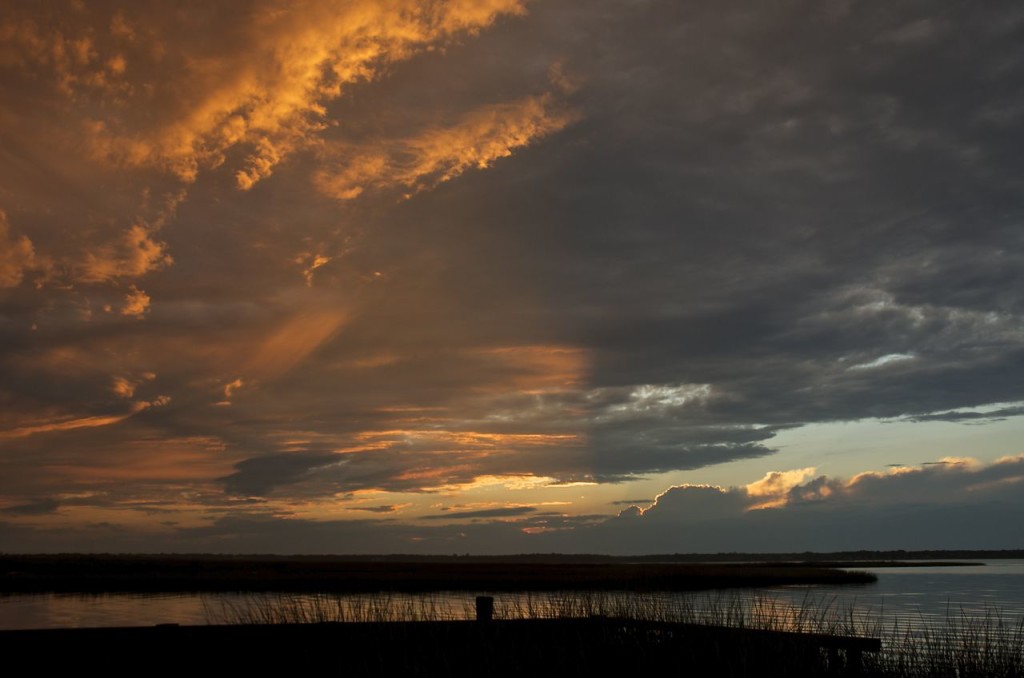 The sunset was taking its time. It was a long slow beautiful display of light and color. It was a different when our kids were younger, or when the family had all gathered at the house for an evening meal. In those days we would have eaten while the sun was setting. Rarely did we travel out to the ocean then to just sit and look at the sunsets. The kids would have been too energetic to look at the slowly changing colors, or listen to the rhythmic sounds that came with the darkening sky. 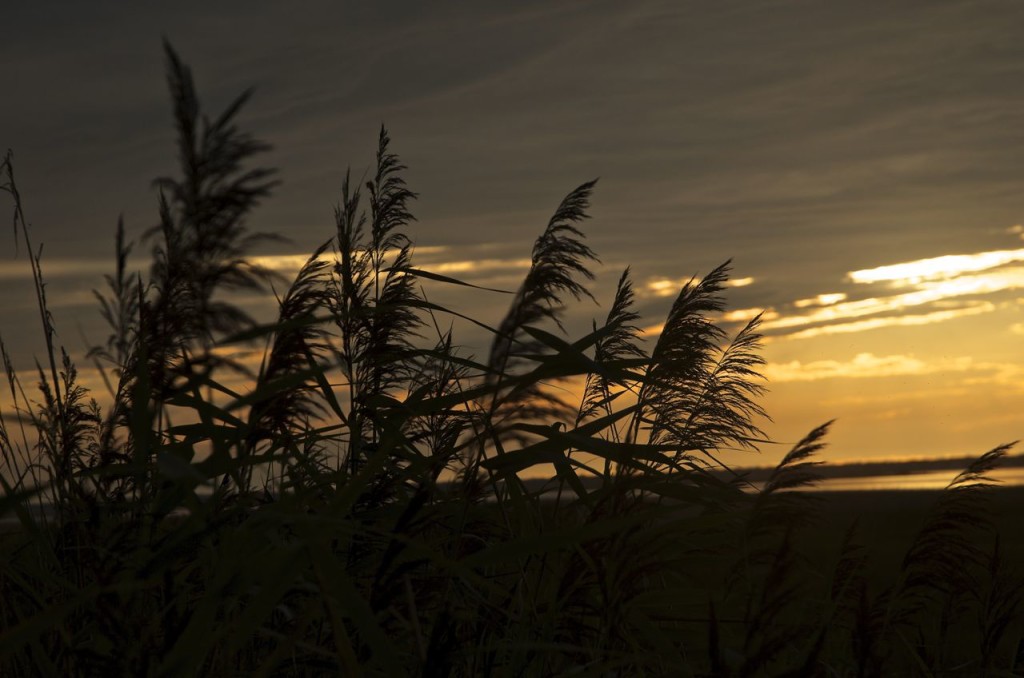 Young children can only be bought off for short time with, “Yes, we’re going to get ice cream.” “Isn’t the sky beautiful?” And then finally, in exasperation I remember saying, “Will you stop kicking the back of my seat!” But those days are gone. My husband and I continue to drive along Dune Road watching the sun sinking into the horizon, quietly thinking our private thoughts, undisturbed. This sunset feels as though it is going on forever. It’s probably my imagination, but it feels as though there is a sense of sadness about this sunset as though understanding that this is our last weekend in the house. 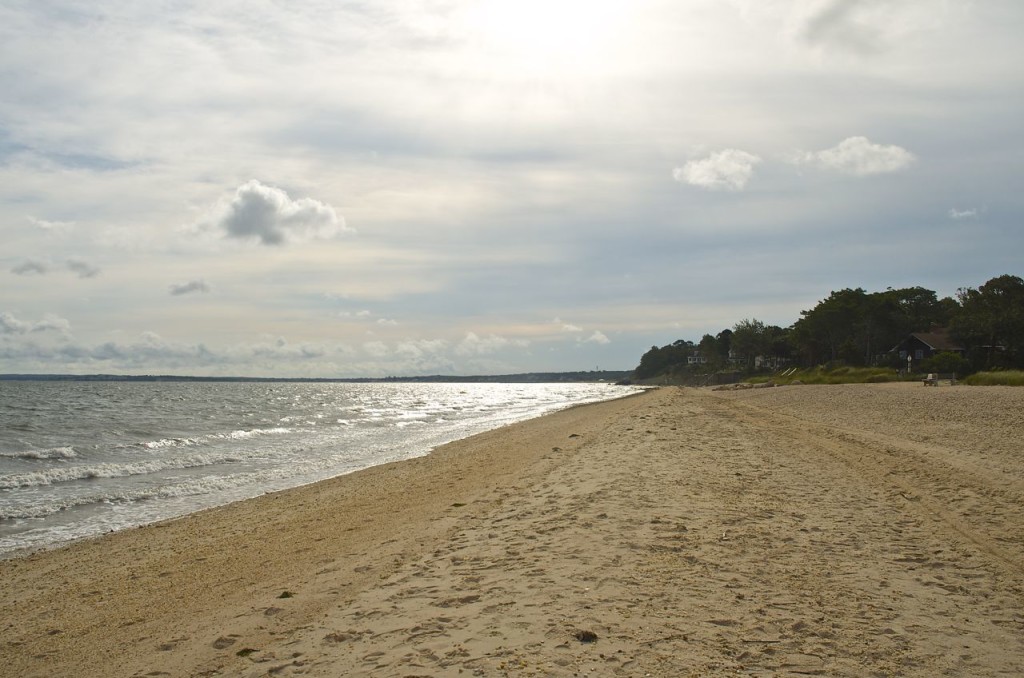 There was still no sign of Hermine on the second day of our long Labor Day weekend. The Peconic Bay water was slightly rough. It’s quite windy, but it usually is a little turbulent this time of the year. A few clouds race across the sky, a couple fishing boats speed through the open water, but it did not look as though any storm was coming. 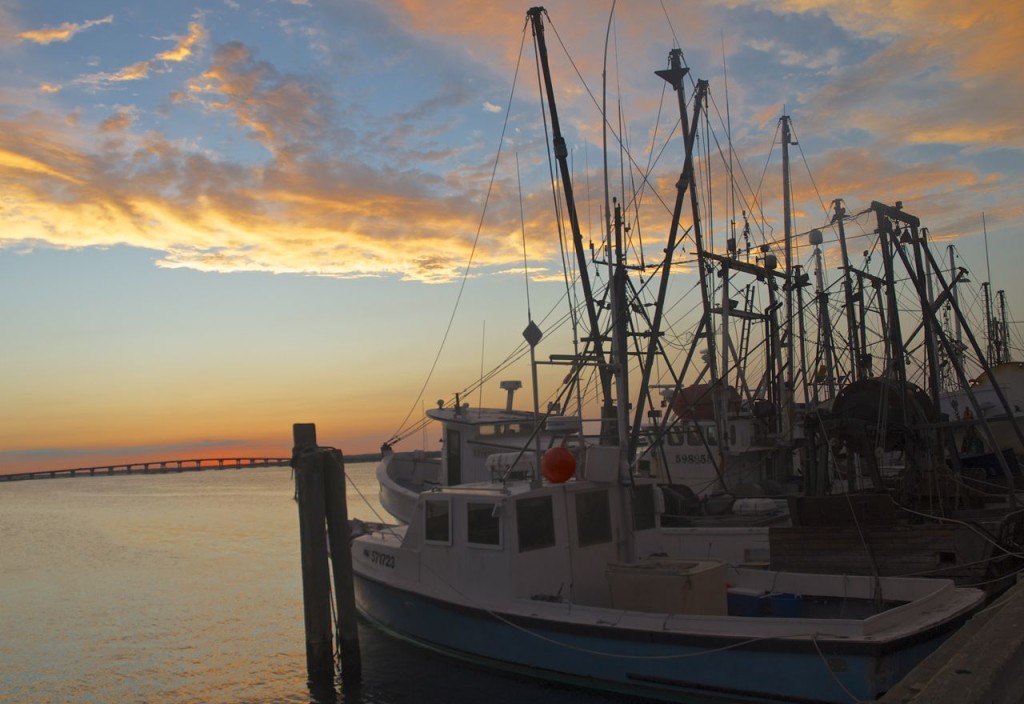 We spent the rest of the day lounging around, reading, watching the Yankees on the TV and then in the evening we went to a local fish joint and had dinner. Again the sunset was spectacular. Yet, there was still no sign of an approaching storm.

The closer we got to the end of our stay, the sadder and emptier the house felt. We decided that we would stay one more night, and then in the morning pack up the car and leave.

In the morning there was a brisk wind. The sky was once again a brilliant blue with only a string of clouds along the horizon. So, once we had the car packed, it was time for one more look at the ocean before heading back to the city.

When we got to the parking lot at the Inlet, the place was hopping with activity. The surf was up! And there was hardly a parking space left. 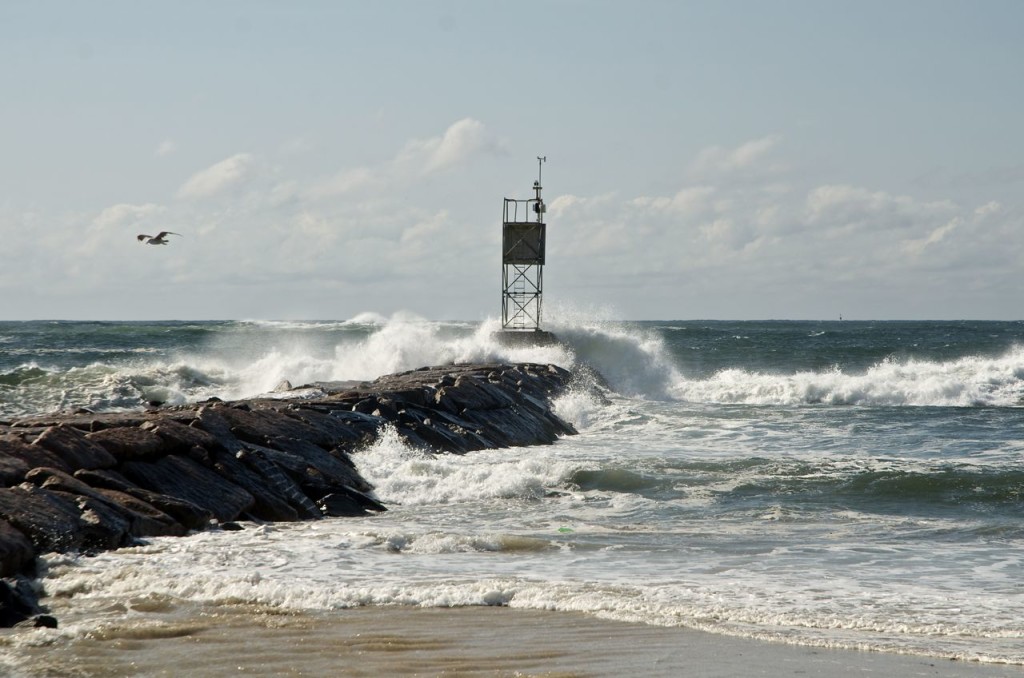 The same jetty where a couple days ago had been the location for a romantic photo shoot, was now the scene of waves crashing against the rocky outcrop. Excited seagulls hovered above the turbulent water searching for damaged clams and crabs that would periodically wash up on shore. 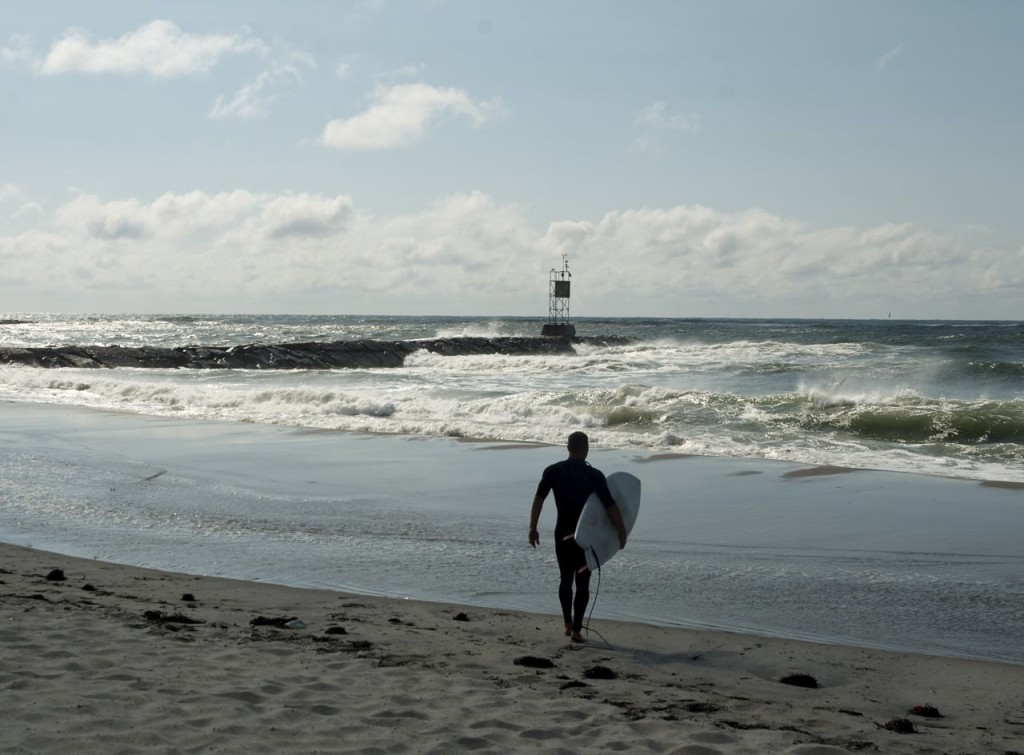 Surfers, decked out in wetsuits walked out into the raging water, seriously anticipating to catch a grand ride. 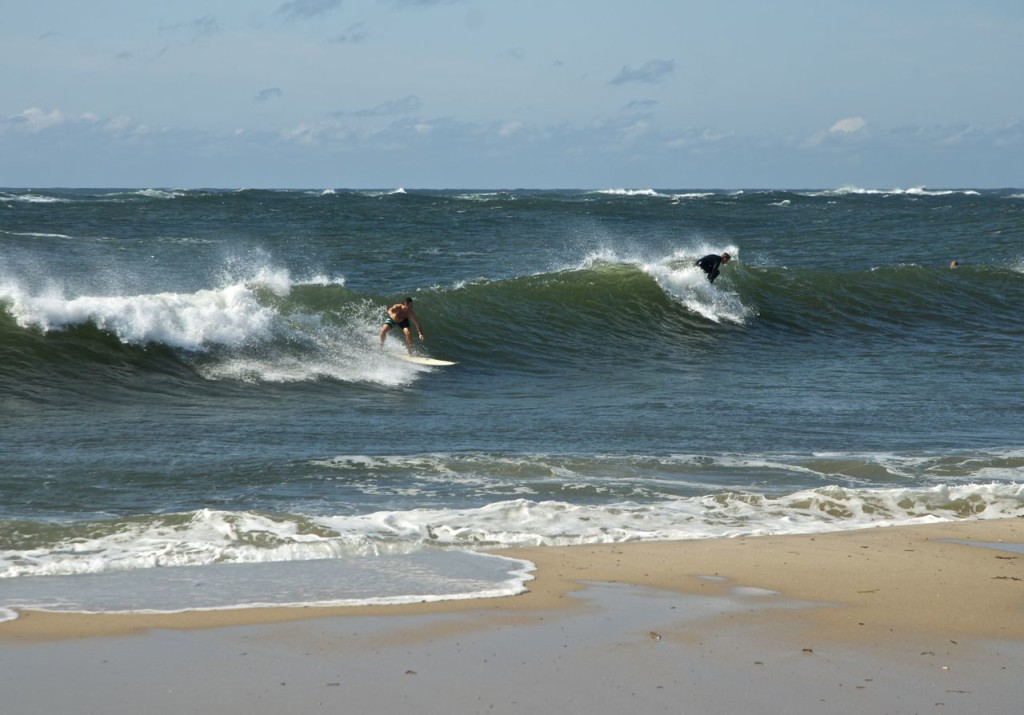 Dozens of surfers swam out to the farthest edge of where the waves began to curl. Sitting on their surfboards, they watched. They waited patiently. And then, when everything was right, they stood and triumphantly rode the crest of water sliding into the shallow pool on the sandy shore. 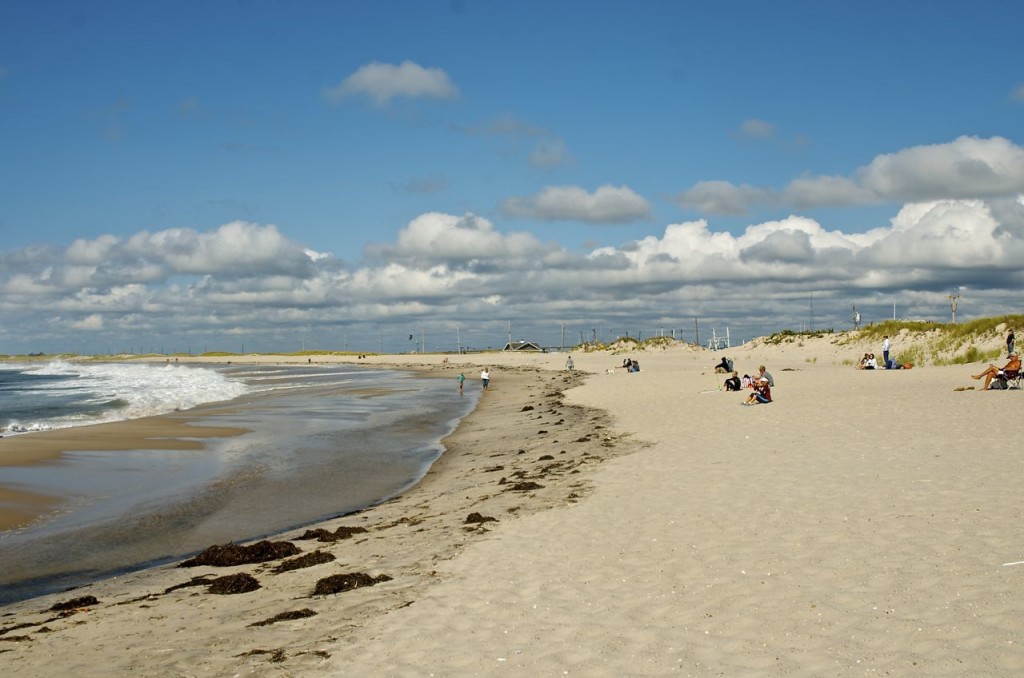 There were quite a few people on the beach watching the surfers. Great gusts of wind whipped up the sand, striking me in the face with sharp stinging.

The water was far too rough for fishing and I suppose this was the lament of some of the people sitting in their lounge chairs watching the surfers. 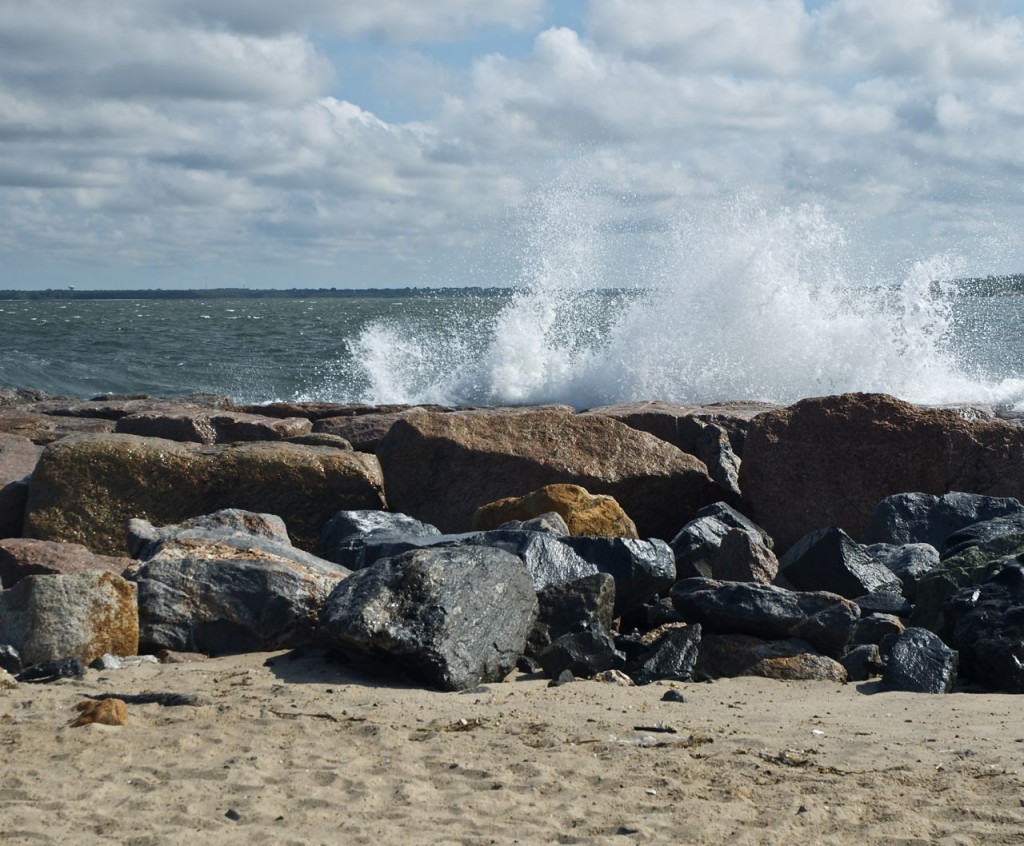 We got back in our car and sat facing the jetty for a while. The raging water splashed against the rocks. The smell of salt water was strong in the air. The mist from the crashing waves speckled our windshield. For a short while we forgot the sad and empty feelings we had about leaving the house. It was a beautiful day. The selling of the house would bring new experiences. And we would always have our memories. You don’t sell those, they are part of what you pack up and take away with you.

18 comments for “LAST DAYS AT THE BEACH”