It was a lovely spring day in New York City. The sky was divided equally with a deep blue on the western horizon, while mounds of fluffy white clouds lazed about in the heavens on the eastern vista. It was a perfect day to walk in Central Park. 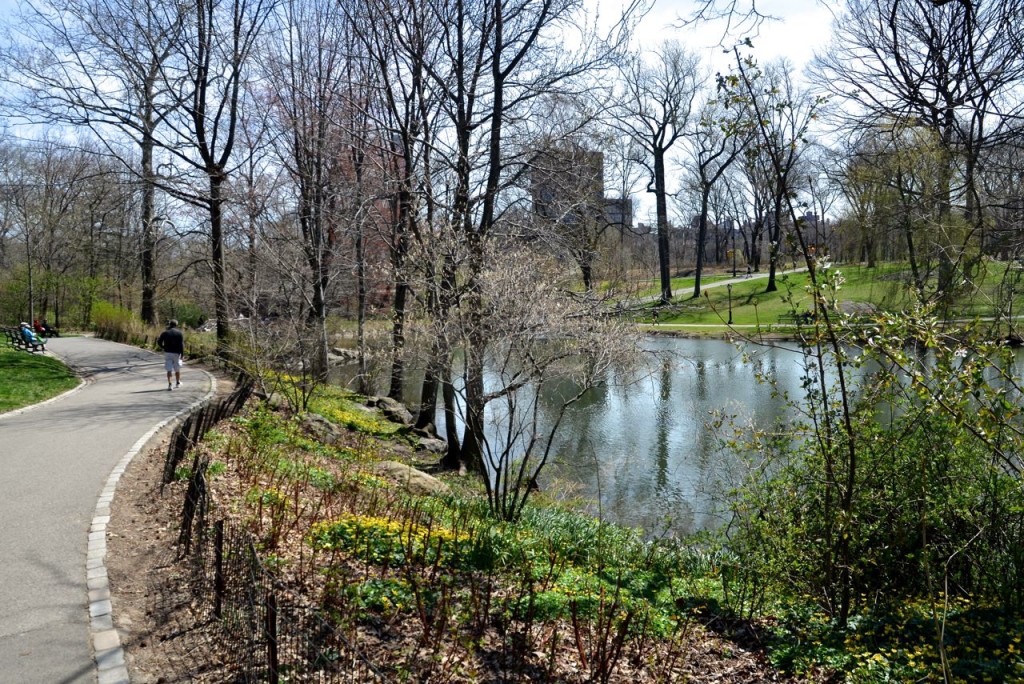 Once at the entrance to the park I knew exactly where I was headed, to the lake. Most of the trees at first glance appeared bare. But looking closely, I could see little buds just beginning to swell on the tips of the branches. Nesting birds called out to each other. A few people strolled along the paths taking in the early morning crisp air. 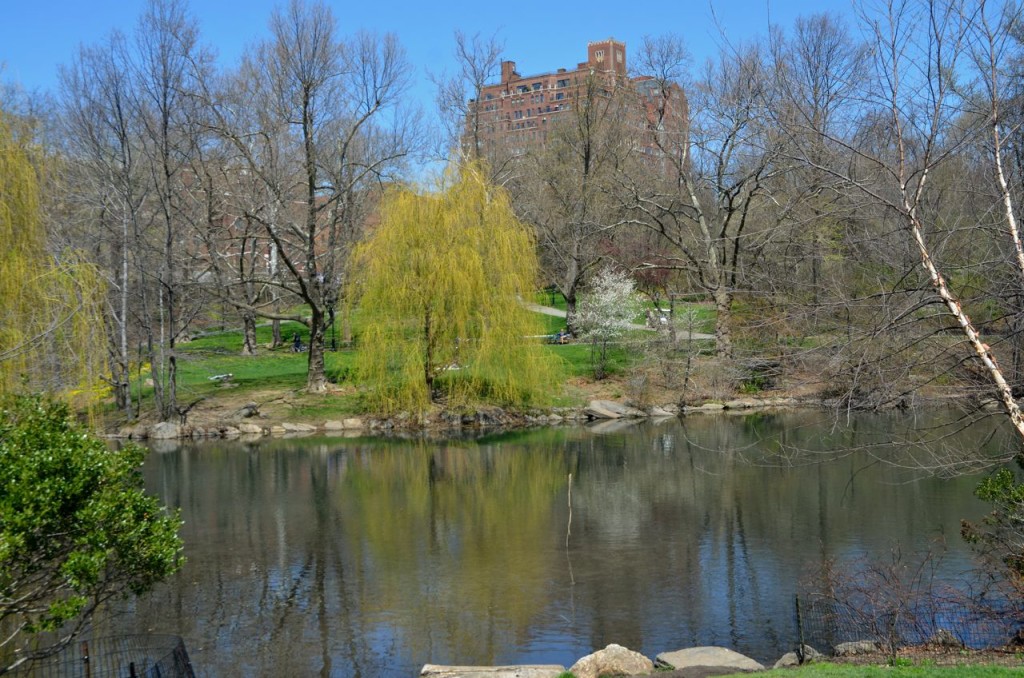 The evergreens make a stark contrast to the trees that seasonally drop foliage in the fall and then slowly come back to life in the spring.

I have always loved the swagger of a Weeping Willow especially as they come out of their dormant state. Its lovely yellow-green foliage appears to be pouring from hidden limbs, a waterfall of color and affirmation. 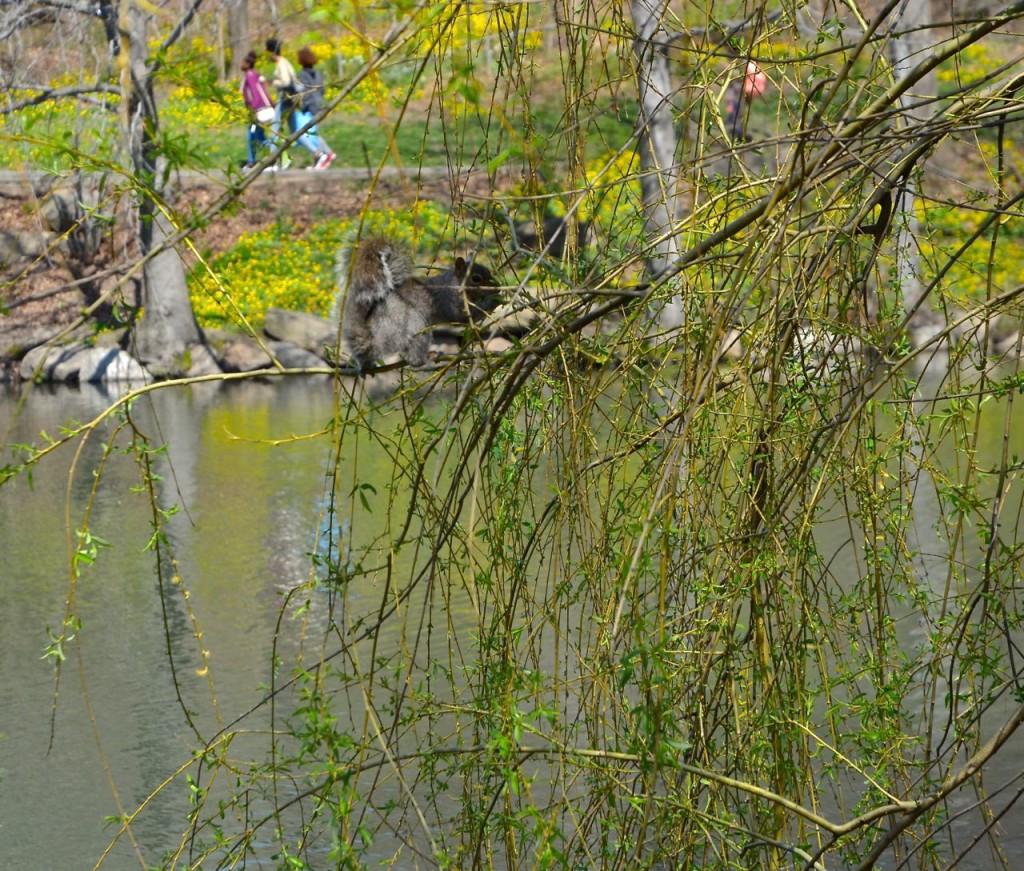 Squirrels were busy chomping on the early green buds of the Forsythia bushes that were just coming back to life. This fellow is a bit hidden in the shadow of a tree as it frantically munched on its mid morning meal. 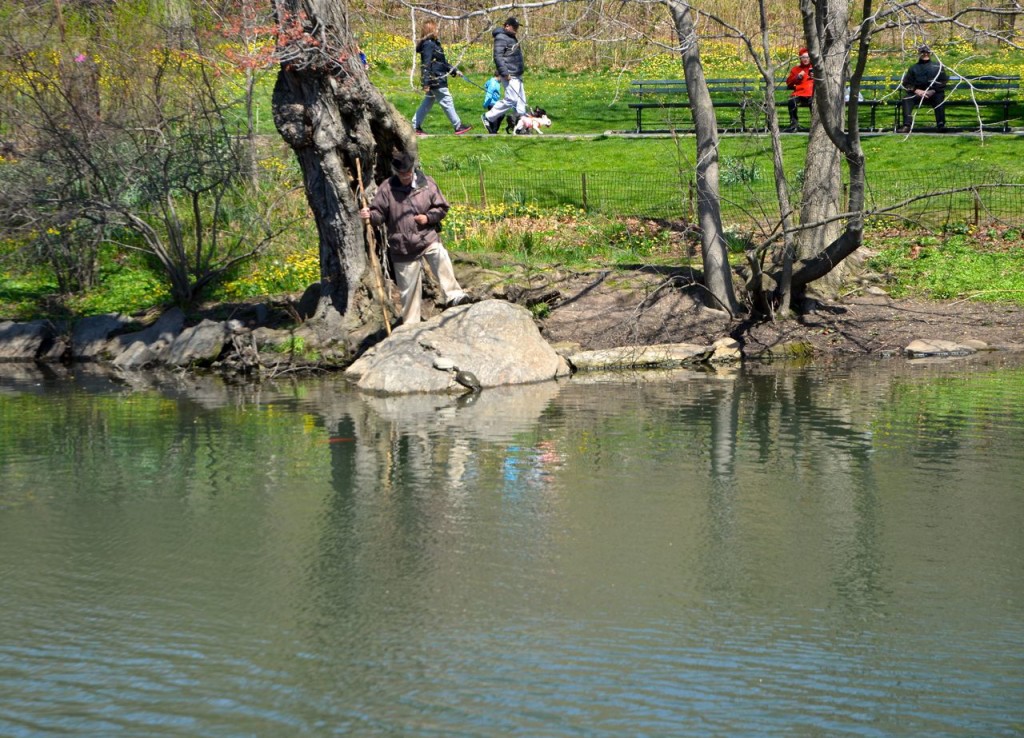 I got a real kick out of this guy. He’s a regular in the park. He slowly strolls along the paths, his staff clicking out his steps until he stops to check out the interesting happenings in the park. This day when I spotted him standing on the edge of the lake, I had a strong sense he was communing with this turtle bathing itself on this sun warmed rock. 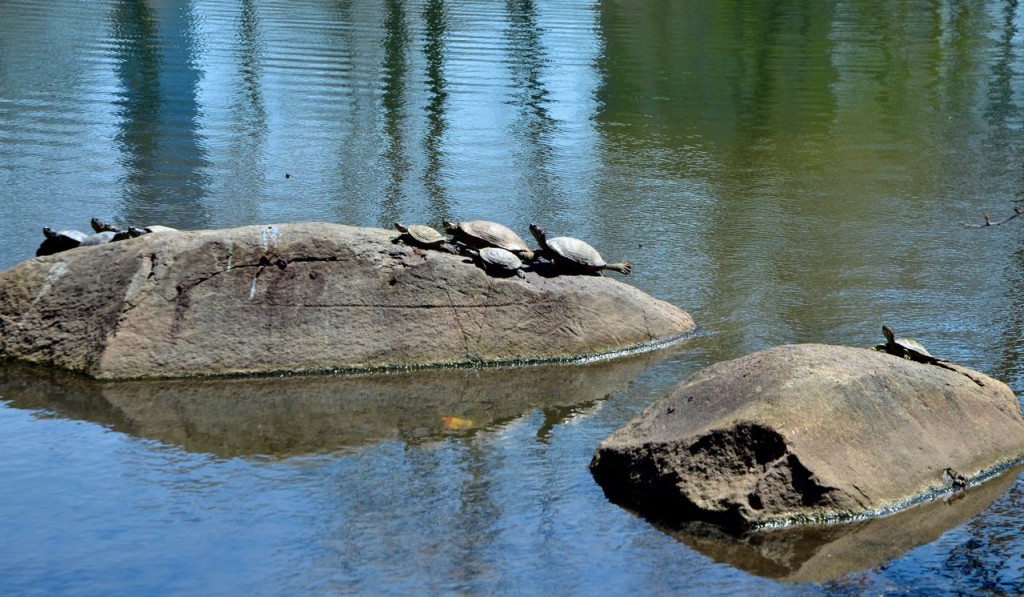 I walked a little farther and spotted an entire family of turtles taking in the morning sun. I’m sure they were happy to greet the arrival of spring after their long winter hibernation. These are such interesting aquatic creatures. When the season cools and the temperature goes below 50 degrees, these animals hunker-down, embedding themselves in the muddy bottom of the lake and drift into a semi sleeping state. Their heart rate slows to less than one beat per minute. During this time they do not need to breathe and I’m very sure they are happy to see the sun come out. 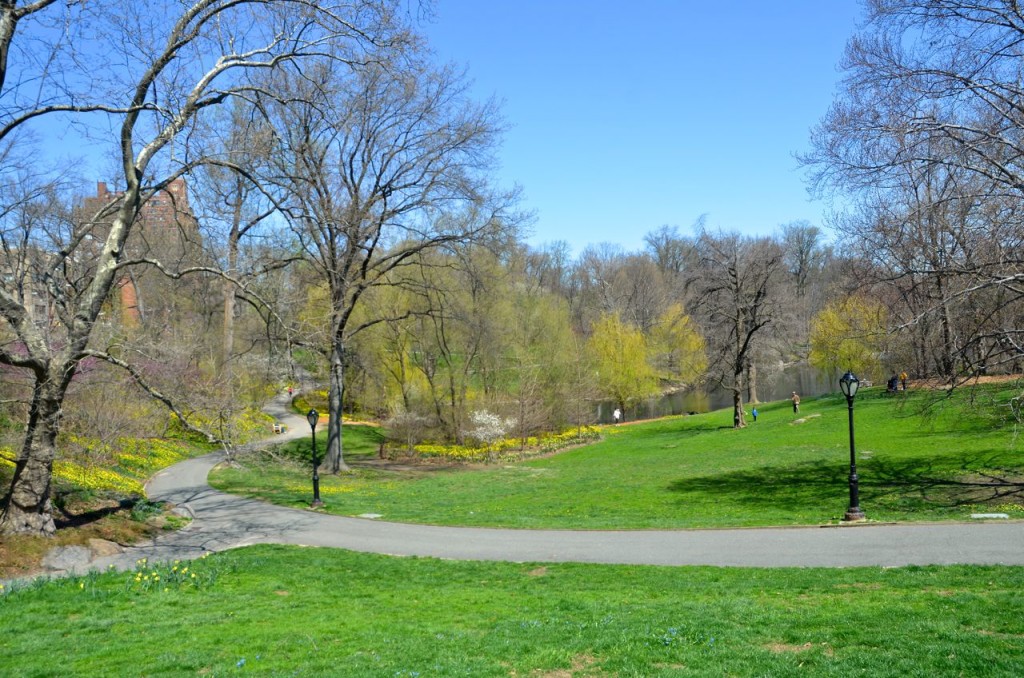 Central Park has many nooks and crannies, little hidden areas that have the sensibility of a personal garden. And then there are luxuriously languid grasslands, open meadows where children, or adults, can run and jump, do somersaults, or roll down hills of cool damp grass.

I walked for a couple of hours, sat on a bench and watched the geese paddling across the shimmering glassy lake. Then I headed home to write a page or two in an unfinished story. Tomorrow I’ll return to the park and visit what I think is the most beautiful walk this time of the year. 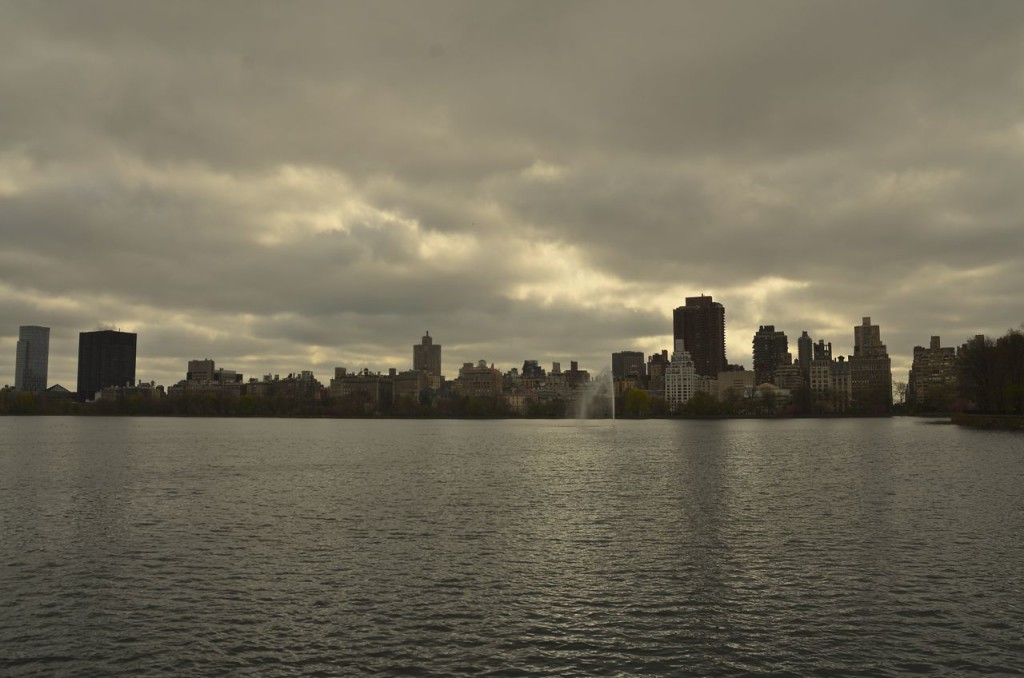 Unfortunately the next morning was a dreadfully dark day. Not the best light for taking photographs. But there was the promise of rain for the next couple of days and I knew that if I didn’t visit this special place now, the rain would bruise the blossoms and turn the petals raggedy and brown. 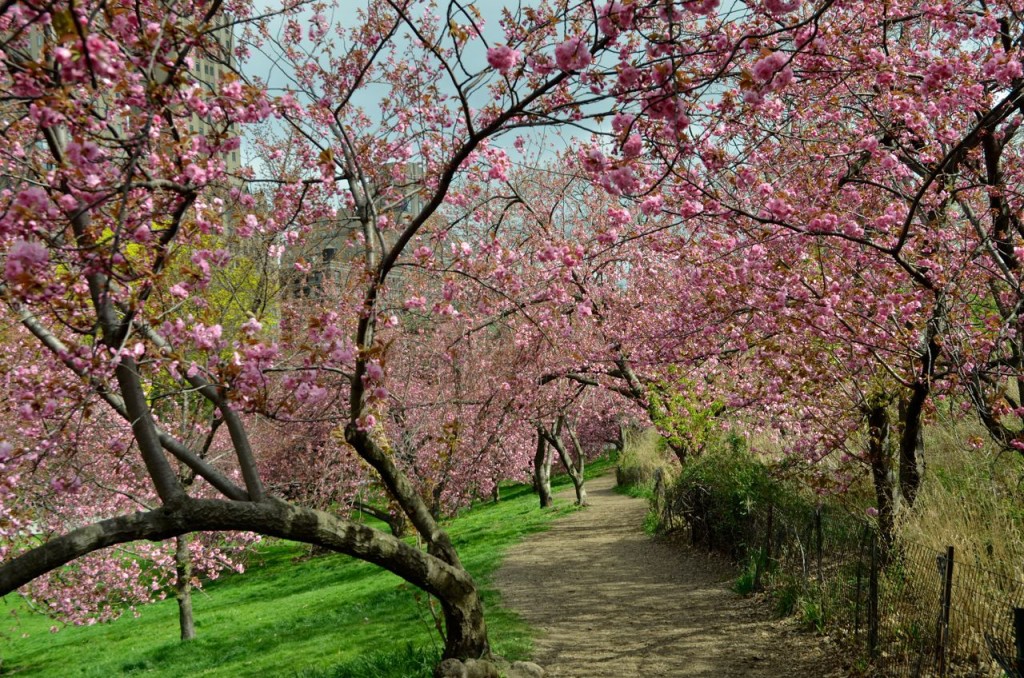 This is my most favorite walk in all of Central Park. There are certainly uncountable lovely locations in the park, but in the spring I think this is the most beautiful. The trees explode with beautiful blooms. The pink petals flutter and dance in the cool morning breezes, and luckily for a few minutes the sun broke through an opening in the clouds and cast a lovely warm light on the trees. 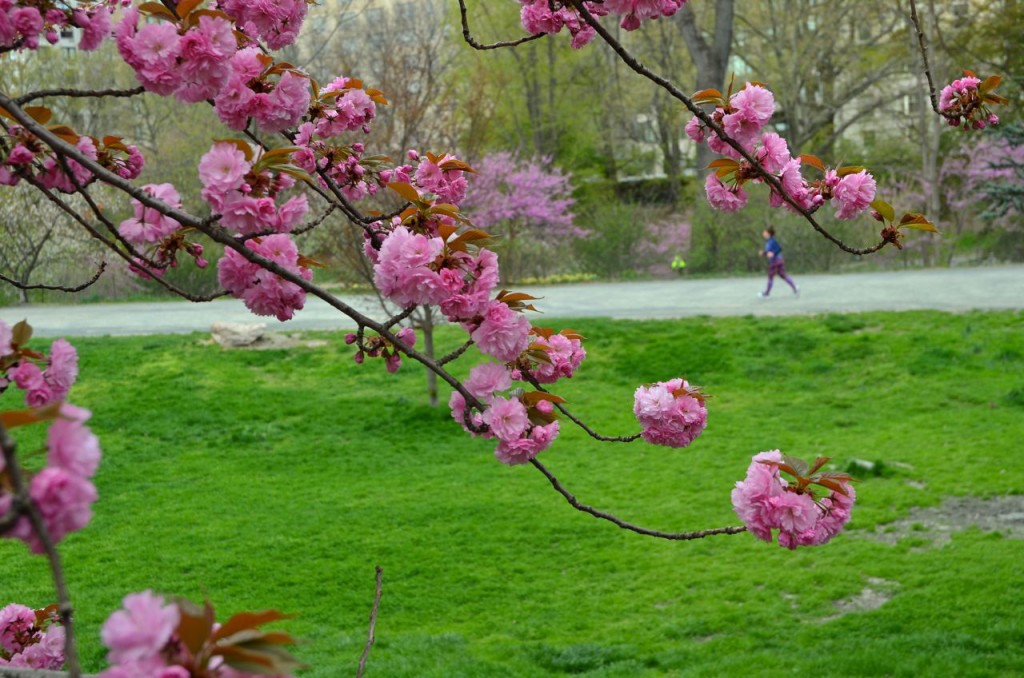 And then as quickly as the sun had appeared it was gone again. The joggers and dog walkers went about their daily routines undeterred by the somber morning light.

I walked up and down the path several times soaking up the deliciousness of this scene. A robin sat patiently on a limb, seeming to be listening for something. It pecked at the blossoms several times and then flitted to the next tree. 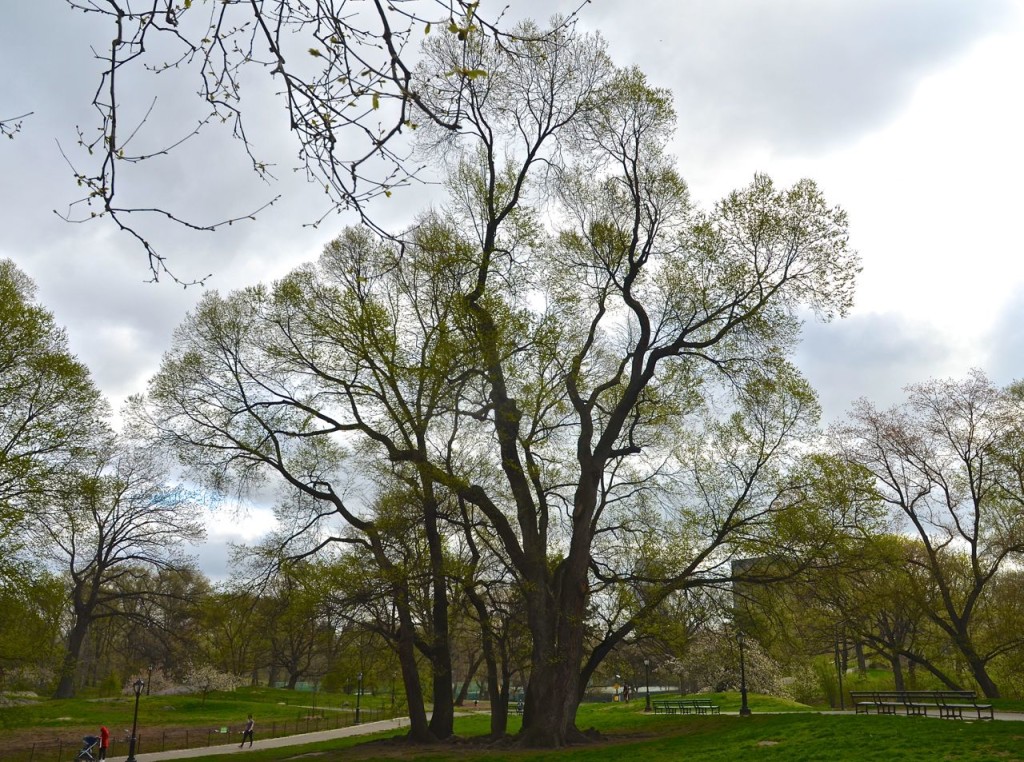 As I headed home to begin my day of writing, I walked past another scene that gives me much pleasure. This tree is very old. On warm sunny days children gather underneath this huge beauty chasing each other, playing hide and seek while mothers sit on blankets taking a rest from their daily chores.

The clouds slipped across the morning sun, muting the usual behemoth shadow that this tree casts. Then for a brief moment a thin ray of sun spotlighted a few branches. But it was a short lived brightness. The clouds grew thick and darker again. The wind began to blow and the birds stopped singing. It was a moody morning, a perfect morning for digging into why one of my fictional characters did the terrible thing that she had done.