It was a brilliant day when our boat docked in the harbor of Cannes. The palm trees trembling in a slight offshore Mediterranean breeze gave the place a sense of the tropics. At the time of our arrival the Cannes Film Festival was still several weeks away. 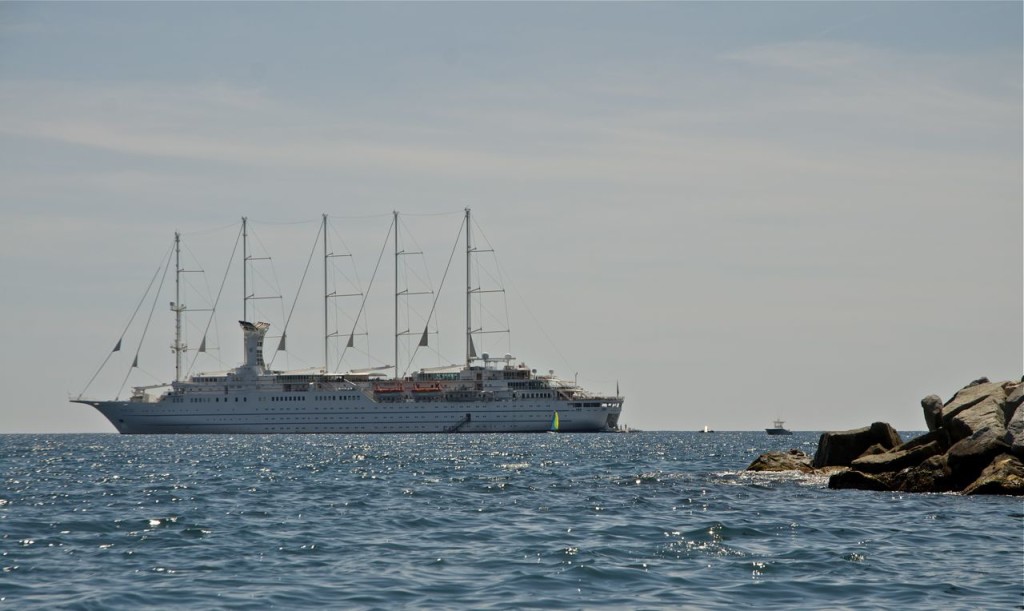 It was early morning, the town was quiet with only a few sleepy-eyed tourists drinking cups of coffee in the outdoor cafes along the main street. We had no need to sit in the open air and drink coffee. We’d already tanked up on caffeine before tendering and heading to shore. We would not hangout in Cannes but were on our way to Antibes, an ancient town a 45 minute drive west of this famous film festival city.

On our way to Antibes we passed a large complex that would be part of the Cannes film festivities. Not much was going on this early in the morning except for a couple of joggers enjoying the cool morning temperatures. But I could imagine that the place would be hopping with activity when the film festival was in full swing, with the long black limos, the paparazzi, and the rich and the famous walking up the red carpet, and the hordes of onlookers eager to get a look at someone special. 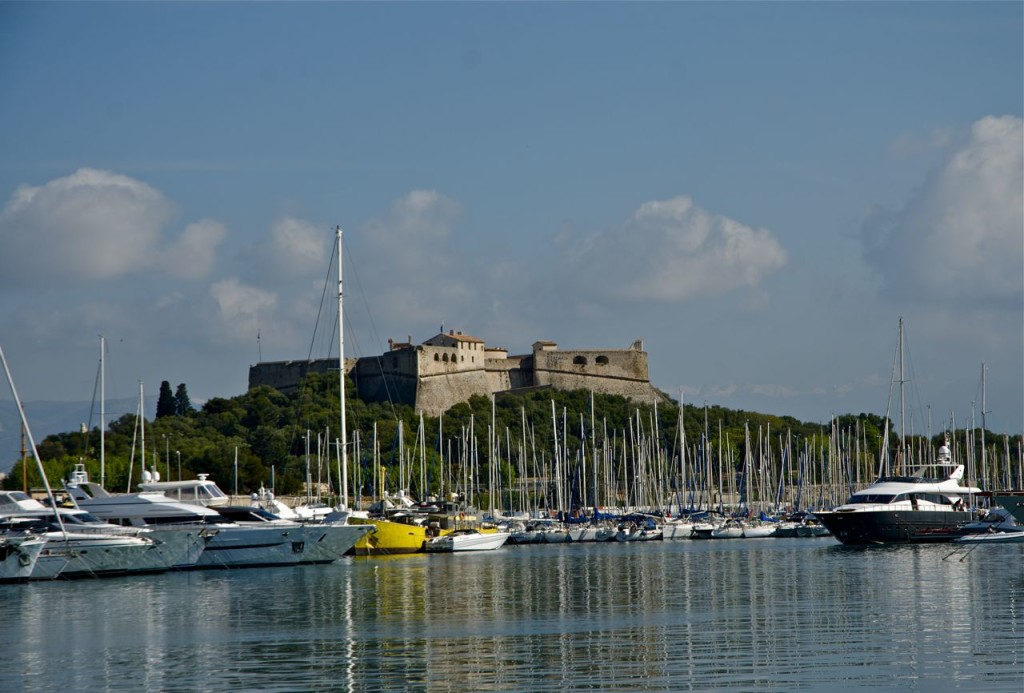 Antibes, located along the French Mediterranean shore, was originally a Greek colony established in the 5th-century BC and eventually became an important trading center. When Rome gradually increased its hold on the Mediterranean coasting 43 B.C. Antibes was officially incorporated into the Roman Empire, remaining under the Empire’s control for 500 years. During this time Antibes grew to be the largest town in the region and a main entry point into Gaul.

Then around 476 A.D. as the Western Roman Empire disintegrated barbarian tribes seized Antibes. This resulted in a long period of instability. In the 10th-century, the king of France granted Antibes to Seigneur Rodoart, a wealthy nobleman, who built extensive fortified walls around the town and a castle in which to live. For the next several centuries the region fell into disarray and the inhabitants remained cloistered behind the walls while a succession of wars and epidemics (including the Black Plague) ravaged the countryside.

By the end of the 15th-century, the region was under the protection and control of King Louis XI of France and though the area was relatively stable, the Port of Antibes fell into obscurity.

In the middle of the 19th-century the Antibes area regained its popularity when wealthy Europeans discovered its natural beauty and built luxurious homes in the interior and along the coastline. And now there are 48 well managed and manicured beaches scattered along the 16 miles of ocean front surrounding Antibes where celebrities and the rich go to sunbathe and swim in the Mediterranean. 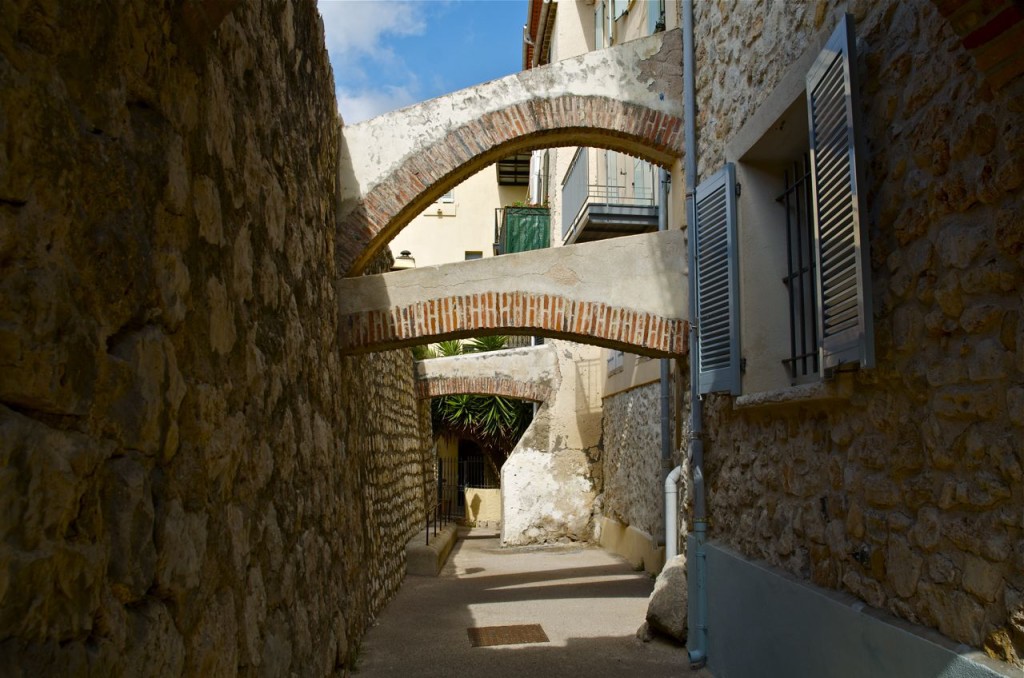 The stone wall built by Seigneur Rodoart still encircles the old city and many buttresses have since been built to reinforce the wall. 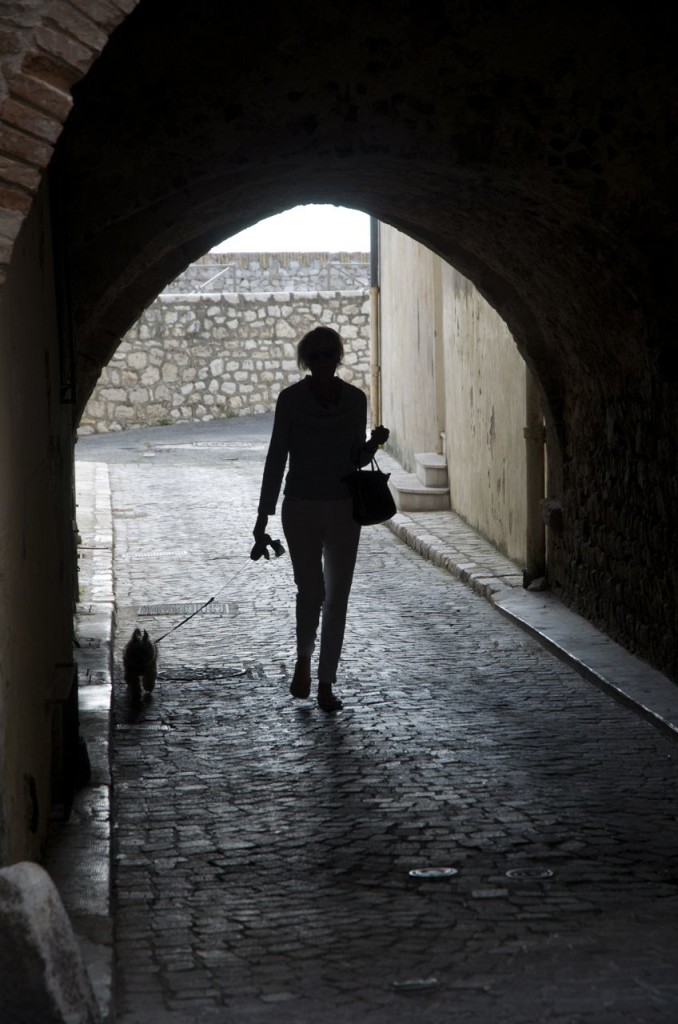 This ancient city is carpeted in cobbled streets everywhere and negotiating through the cool dark arches under the buildings makes for comfortable strolling through the area and a way to get out of the sweltering mediterranean sun.

I was surprised to see the many potted plants adorning the streets and walkways, and almost every window box or terrace was decorated in greenery giving me the feeling that the people who lived here had a genuine sense of pride. 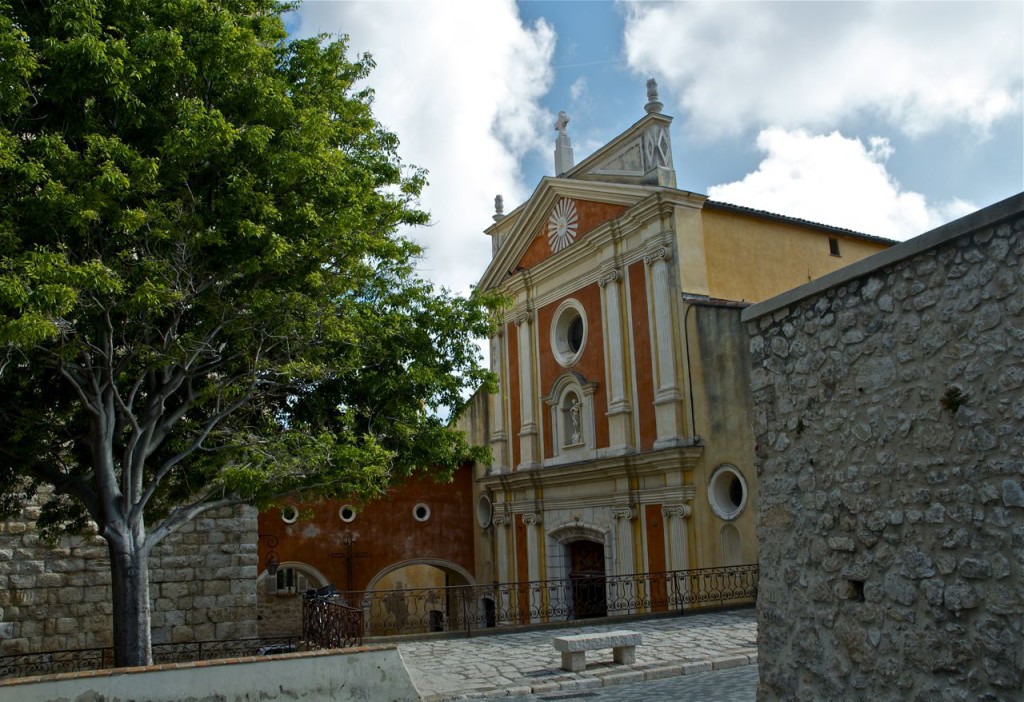 The Church of the Immaculate Conception, the central church in Antibes, was first built in the 11th century with stones used from earlier Roman structures and the church is located next to the castle where Pablo Picasso lived for several years. 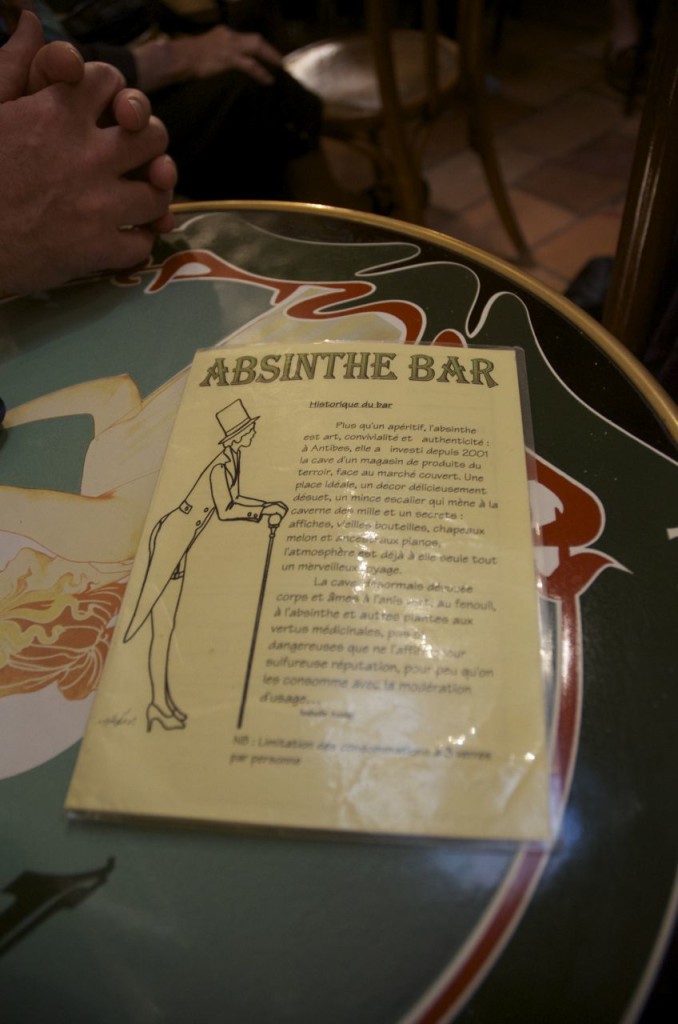 We had a grand time walking the streets of Antibes, looking at the ancient structures and learning about the history of the area, but we were on a mission. We wanted to find the Absinthe bar where Picasso had spent a great deal of his time partaking of this interesting licorice-tasting alcohol. We are not big Absinthe drinkers but our curiosity was piqued when we heard there was a bar in the area that specialized in this beverage. 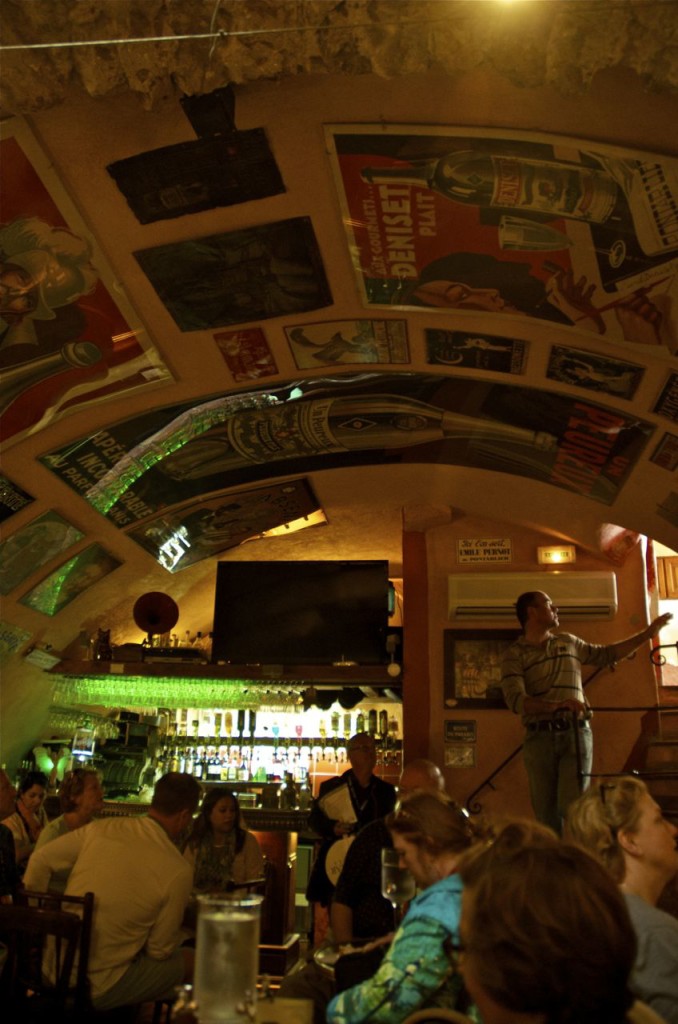 We finally found the bar. It was located inside a 9th century vaulted cellar beneath a very unassuming corner variety store that specialized in the local drink, as well as, regional olive oil, spices, locally made soap and luscious chocolate. 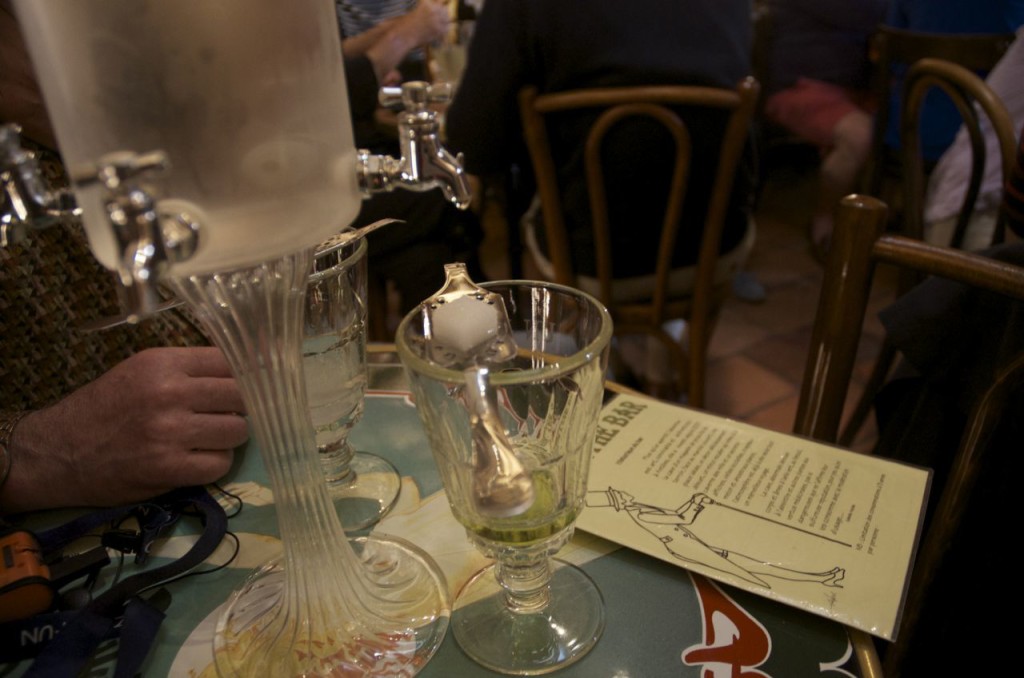 Properly drinking Absinthe is almost a ritual. First a large glass bowl with four spigots and filled with icy cold water was set in the middle of our table. Then the waiter brought us large glasses with perhaps a  shot glass measure of Absinthe. The liquid had a greenish hue and smelled like licorice candy. We were instructed to place the glass under a spigot and were handed a curiously flat spoon with several dozen holes punched across the top. We were shown how to place the spoon onto the class, and then the waiter said to set a sugar cube on top of the spoon and to turn the spigot until we got a very slow drip of water that was to descend down onto the sugar cube. The Absinthe would be ready for drinking when the sugar cube melted away and the glass was half full of liquid.

While we waited for our sugar cub to melt into the liquid we were served tapenade, deliciously salty olive paste and tomato conserve spread on wonderfully chewy slices of baguettes. 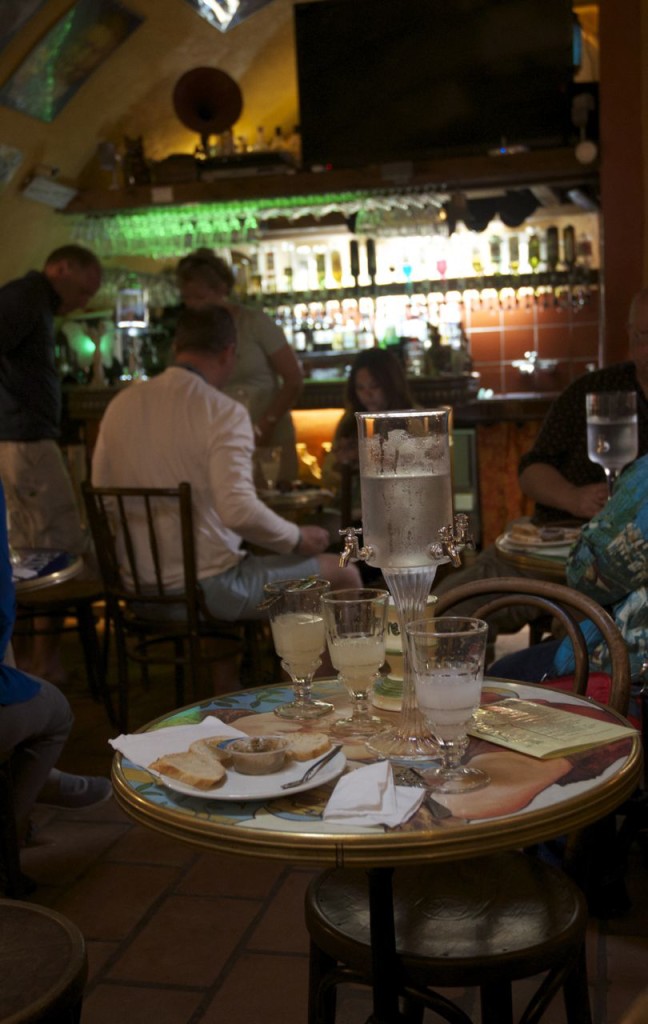 We slowly sipped our Absinthe, a delightfully refreshing, and surprisingly not too sweet licorice flavored beverage, while nibbling on our tapenade. We mused how wonderfully cool it was to sit in this ancient old cellar. Upstairs we knew the Mediterranean sun warmed the cobble stones and long dark shadows from the brilliant sun stretched out blanketing the streets in cool pockets of comfort. But in this Absinthe bar we were gently coaxed back in time to an era when Picasso might have sat with his painting buddies and neighbors discussing how the light of the day had inspired an image. 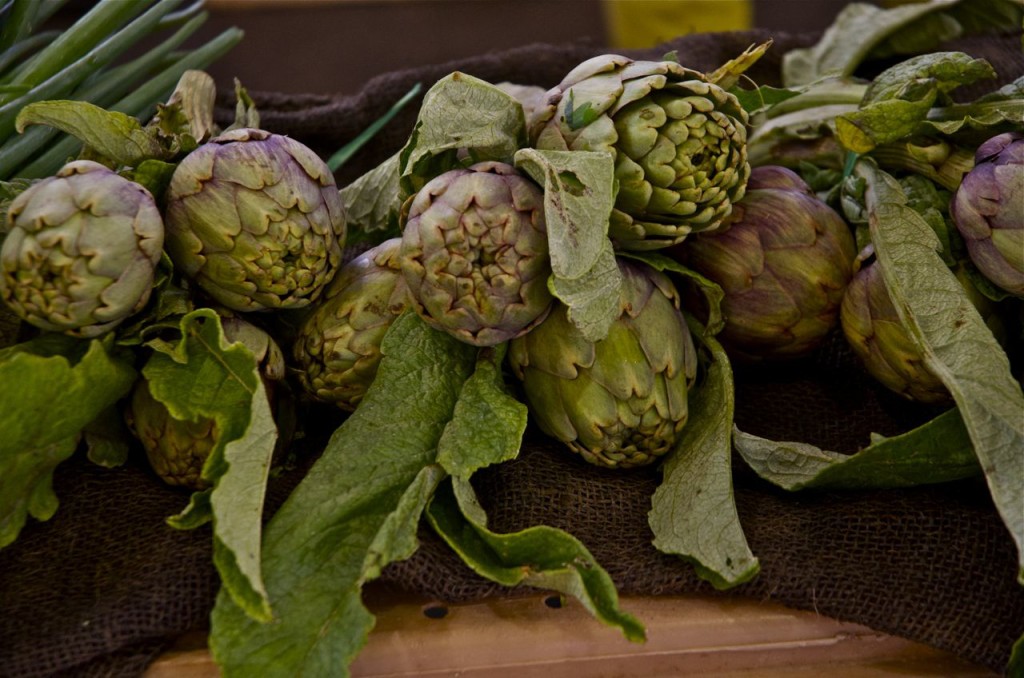 Eventually we had to leave the bar. We walked through the local produce market a bit softened by the alcohol and I do not think I have ever seen such beautiful artichokes. I bought soap from a local merchant, some brilliant red sweet paprika and a few fuzzy ripe peaches from a farmer. 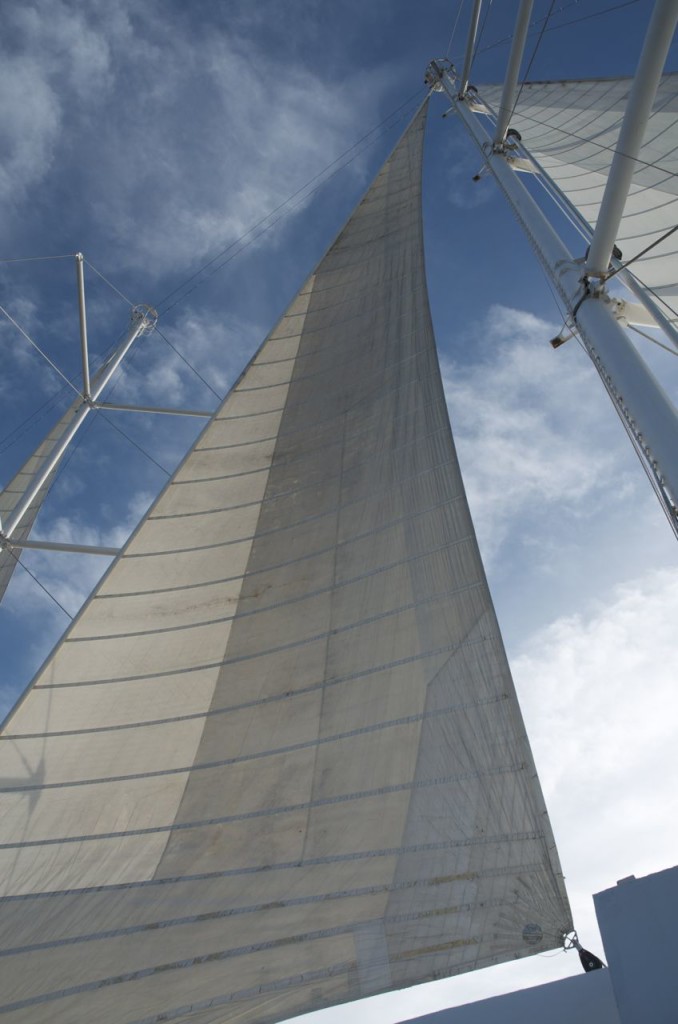 And then it was time to travel back to our ship that was scheduled to set sail around dinner time. The sky had clouded slightly with white puffs that slowly moved toward the shore. It had turned into a lazy hot day and the cool sea breeze was welcoming.