We hit some pretty rough water a couple of days before the end of our Mediterranean voyage and I was happy to get off the ship and stand on solid ground again when we pulled into Portovenere. This was our first port of call in Italy and this region has been designated by UNESCO as a World Heritage site.

Portovenere used to be a fishing village. The port is too small for the giant cruise boats to negotiate its little harbor. But luckily our 300 passenger boat slipped right into the protected cove and anchored without a problem. 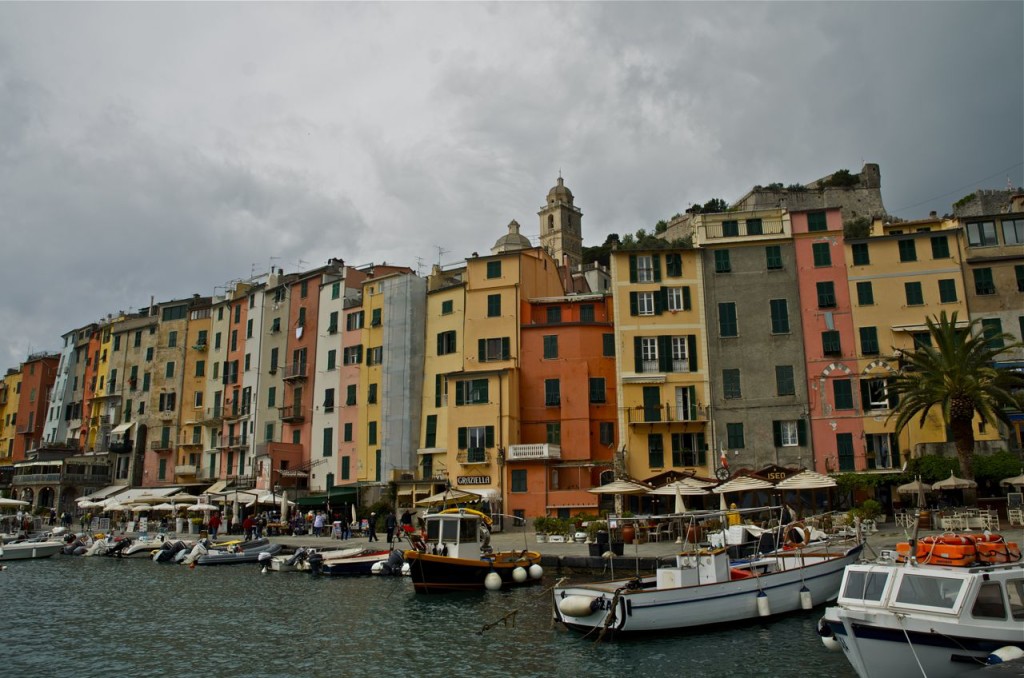 Not only was the sea agitated that day, but the sky was a mess of quickly rolling dark clouds giving an ominous dramatic background to the colorful buildings stretched out along the harbor.

The back walls of these buildings standing at the harbors edge are built into a hillside. 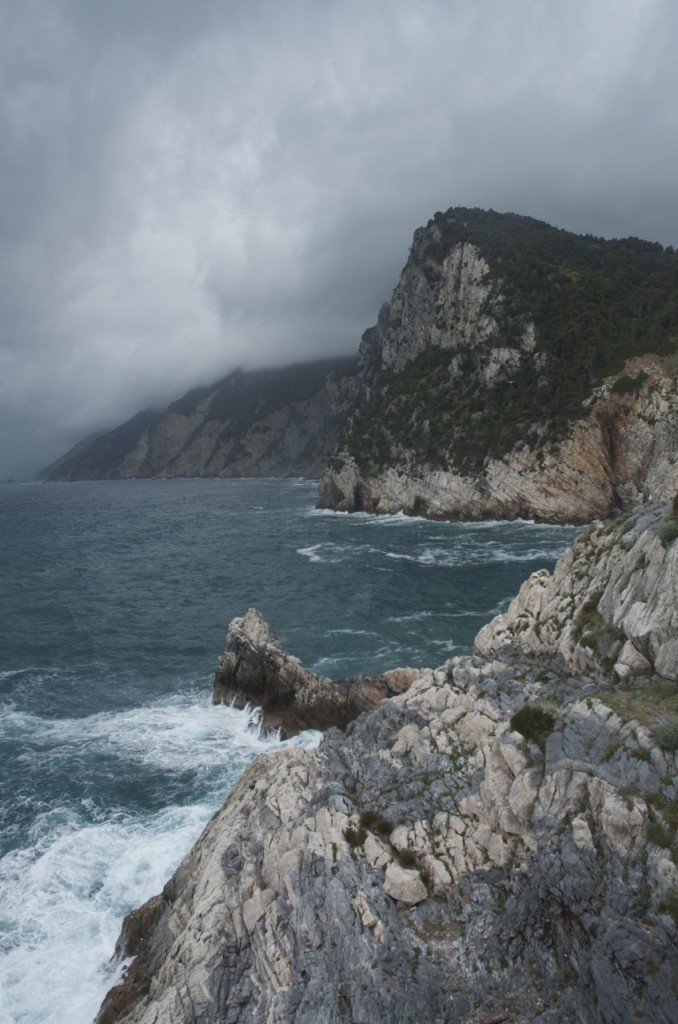 This is a town located at the edge of rugged cliffs of the Mediterranean on the Ligurian Coast of Italy. On one edge of the shoreline is the calm and safe harbor, while the other side of the town is edged with rocky coves and jagged cliffs where turbulent water slaps relentlessly at the craggy precipices. 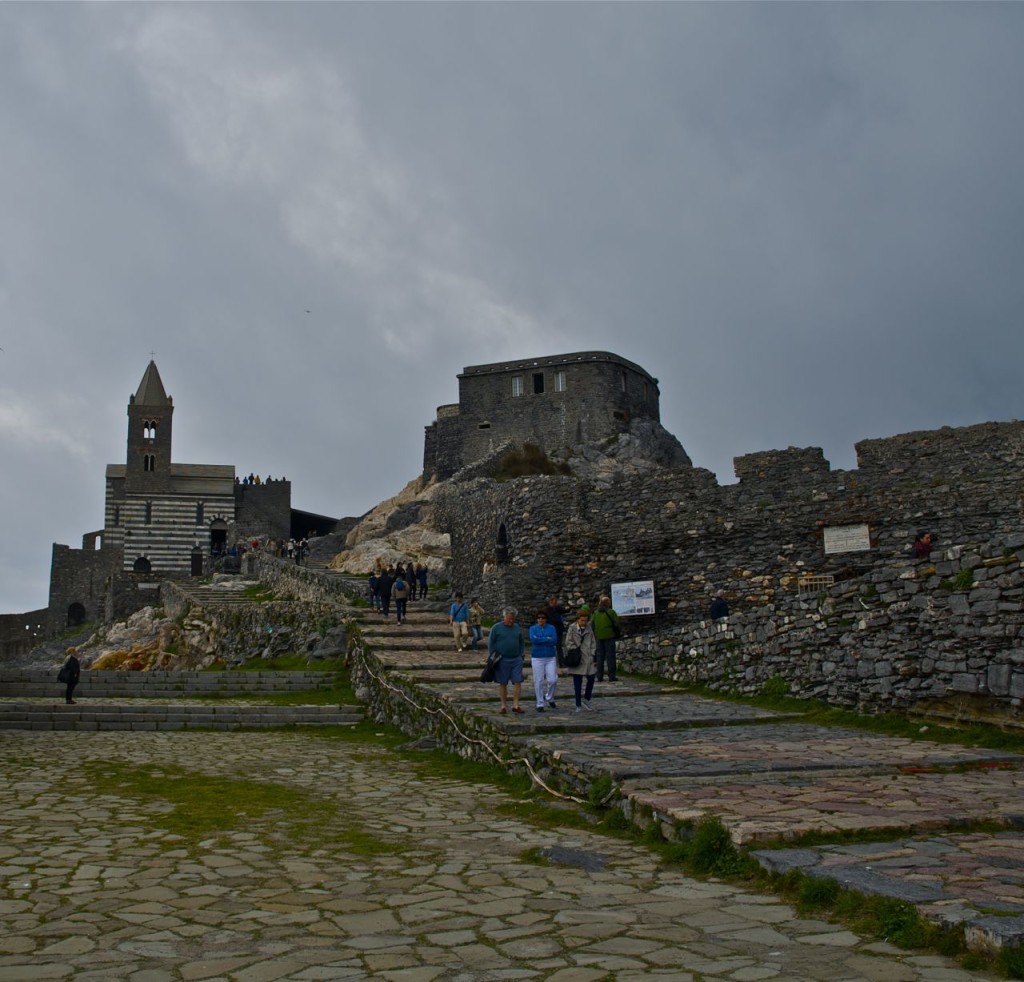 Once we stood on terra firma, the first place we visited was the Church of San Pietro. It’s one of the best examples of Gothic-Genoese architecture in the area and was built in 1256. According to legend the church was erected on a site that once was the location of the Temple of Venus. 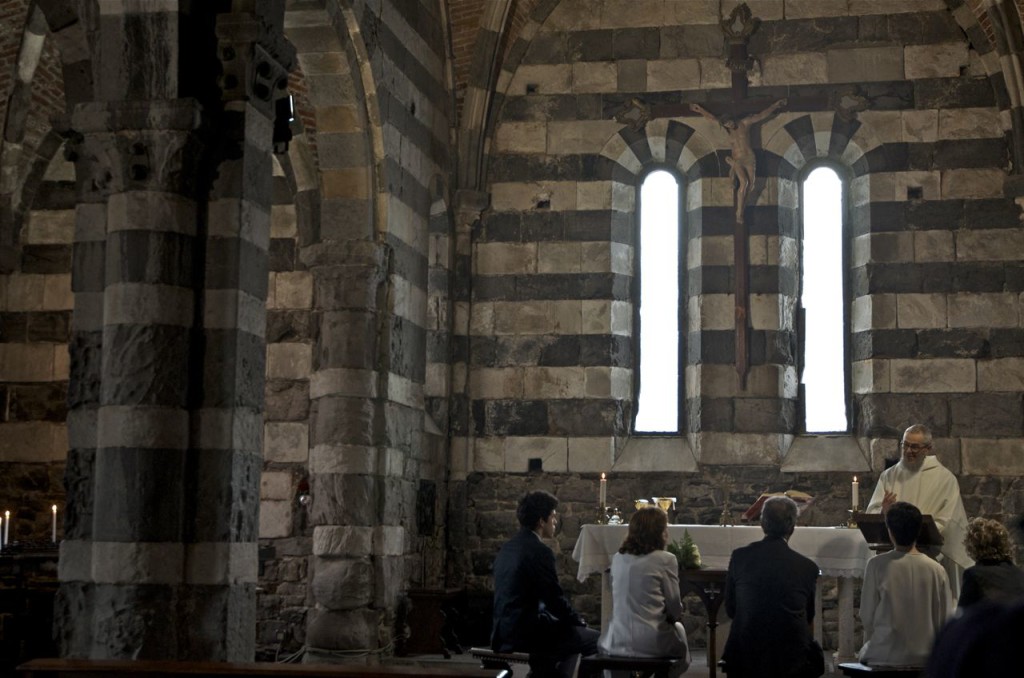 We didn’t know what to expect when we entered this small church that was perched on the edge of a cliff that overlooked the Mediterranean. And when we stepped in we encountered a wedding. The bride, mature, the groom, crowned with a thick head of gray hair, and flanked by a young family. The couple listened intently to the priest officating.  Evidently weddings, and not just tourism is a big business in this area. San Pietro advertises on the internet that it is available for religious weddings Mondays through Saturdays and the site provides information about catering, as well as, where to park, with an offer of shuttle bus services for the guests. It is also suggested that a couple should book early due to the high demand for the Church. 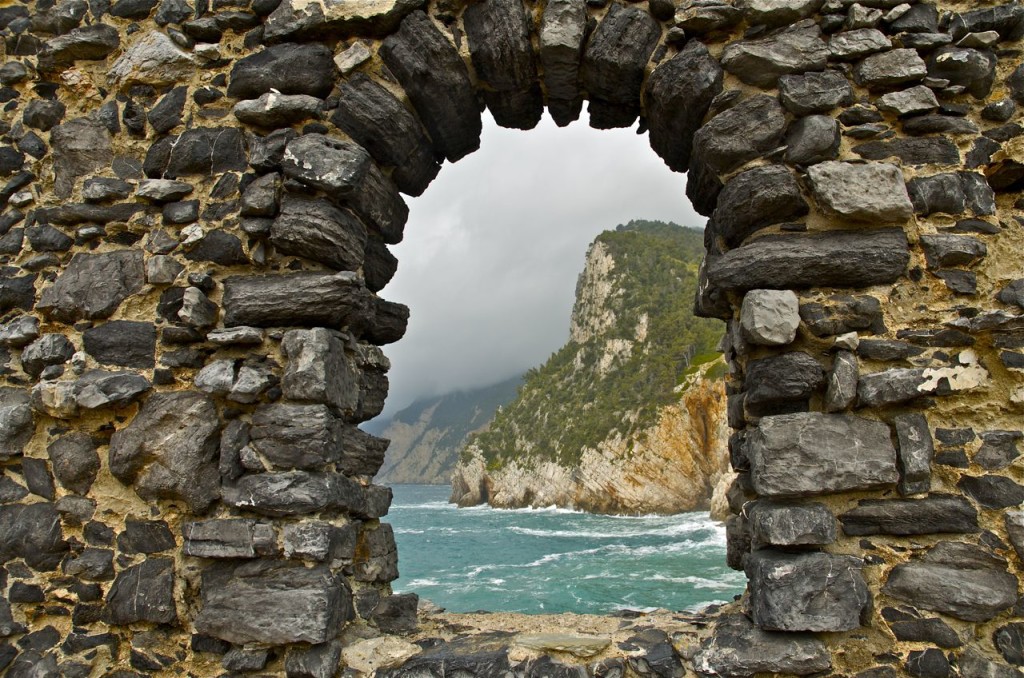 A high rock wall with arched openings runs along the steps that lead from the church up the castle at the top of the hill. 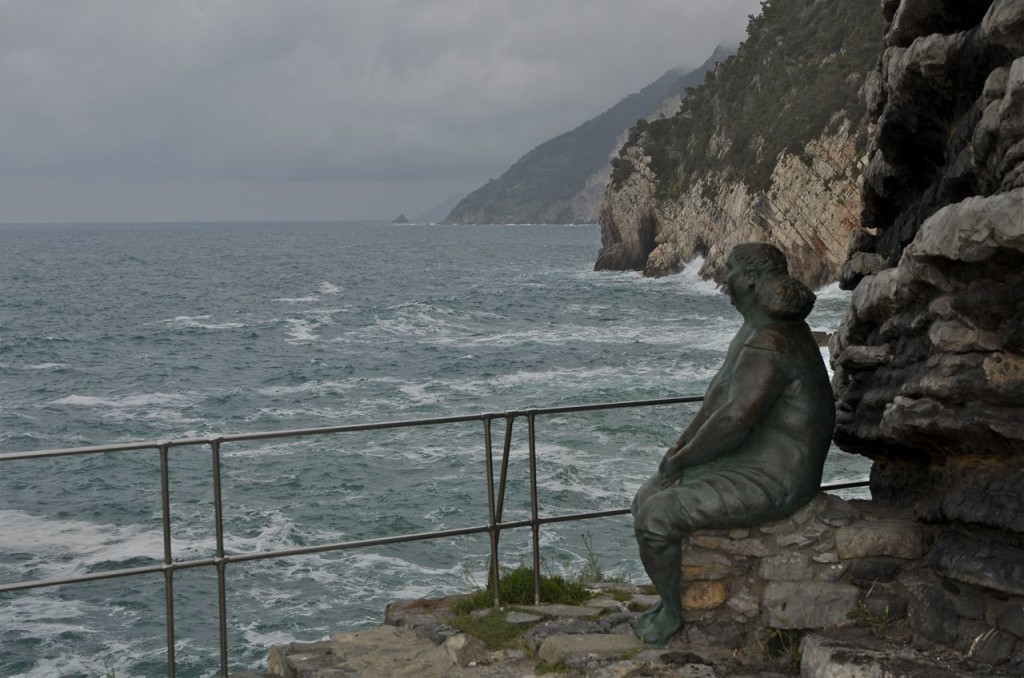 Lord Byron lived in this area for a while, as did the poet Shelly. In 1822 Byron, born with a clubfoot, swam in these rough waters to visit with Shelly who lived on an island several miles from the mainland. Swimming gave Byron a sense of freedom that he could not experience while walking, and over the years he met many swimming challenges in Portugal, England and in France.

A bronze statue, “Mother Earth” sits vigilantly looking out onto what is called Byron cove. It’s hard to imagine swimming in these rough waters and a record is kept of everyone who has accomplished this feat. 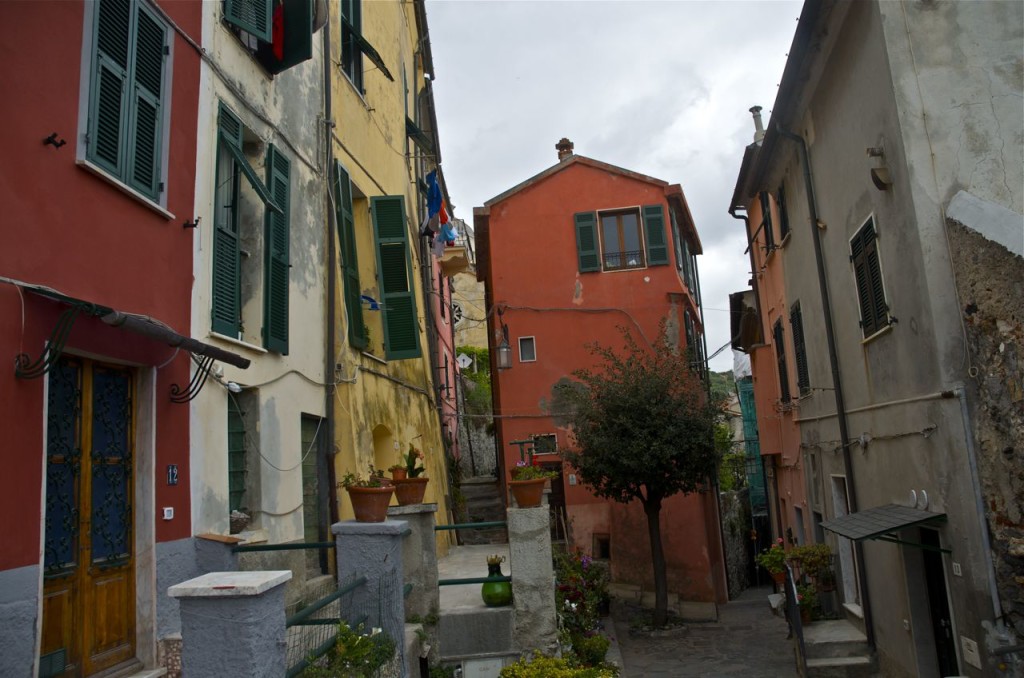 The back streets of the village is a labyrinth of narrow walkways, dark stairwells that burrow under and through buildings. Some structures are built into the hills and a number of paths dead end at lush family gardens. 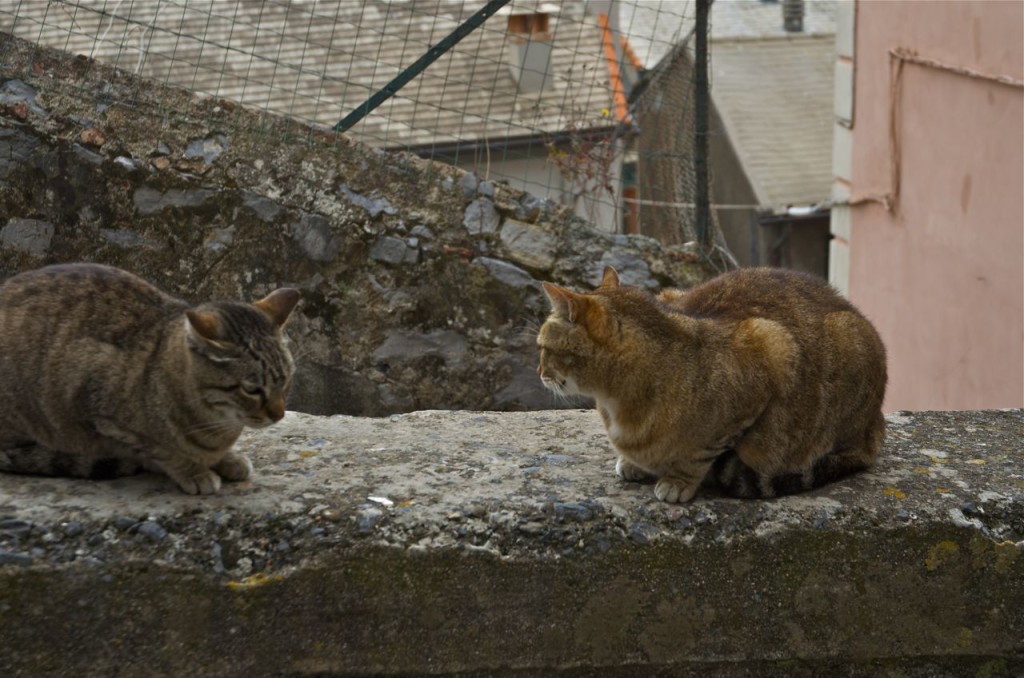 The cats are friendly and though probably quite used to the tourists, they don’t sit still long enough to get an adequate group photo. 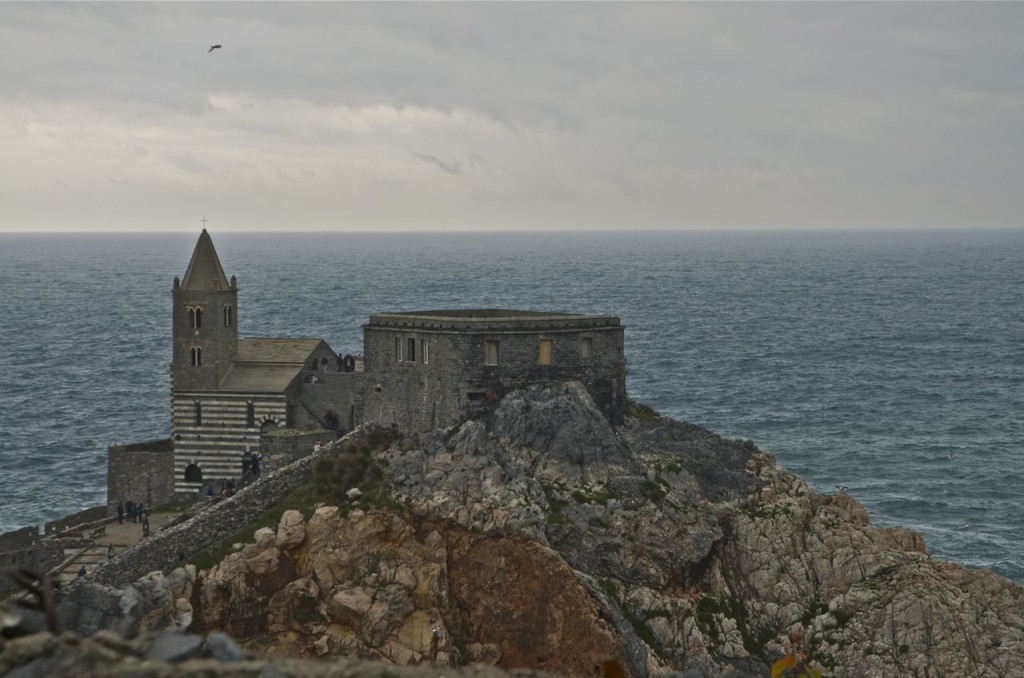 Walking up the rock lined hill and looking back at San Pietro it is easy to believe that this would be a perfect place where pagans could have worshiped Venus. And, yes, a wedding would be lovely here, too. 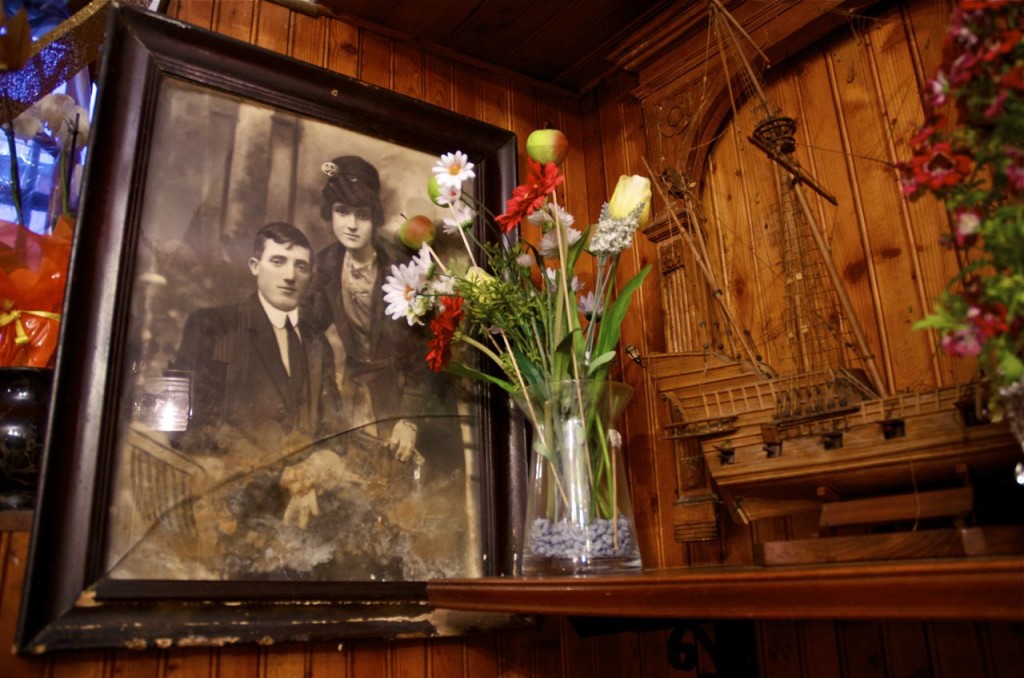 Ah, but it was time to eat. The storm that we’d encountered at sea had moved ashore and we quickly looked for a place to have lunch and get out of the rain. We looked at a couple of places but they seemed a little too touristy for us tourists. We decided on a warm and inviting place that we hoped would live up to its homey ambiance. 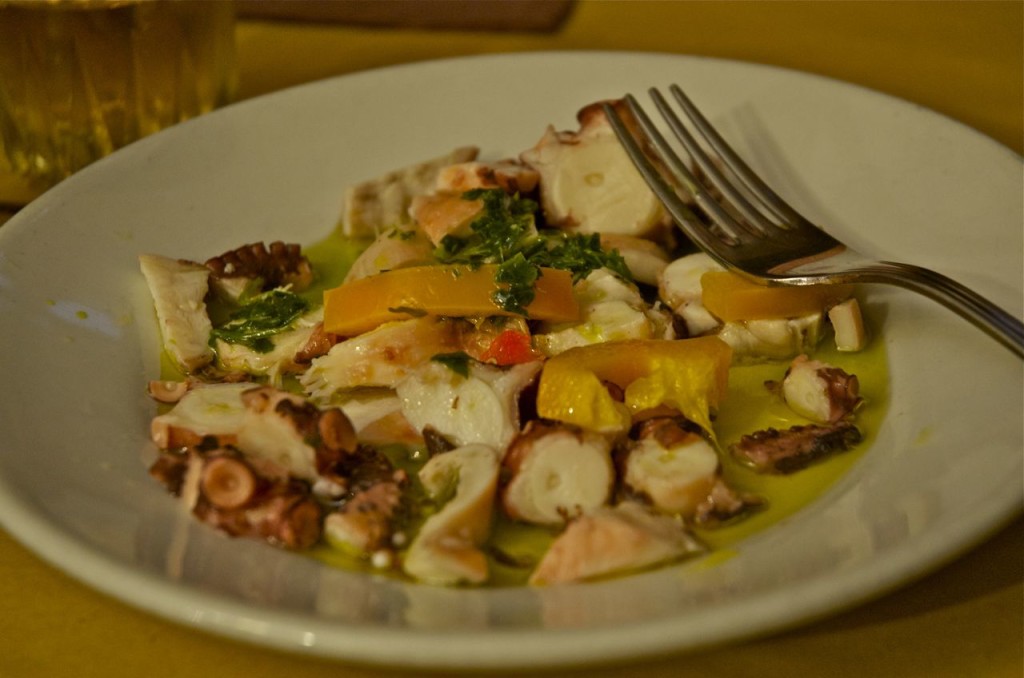 We ordered a half carafe of house white wine and an octopus salad to start. The fish turned out to be as delicious and fresh tasting as if it had just crawled up out of the ocean and slipped onto our plates. The slight drizzle of local olive oil and a squeeze of lemon juice gave the appetizer a perfect amount of contrast in flavor. The wine, rich and refreshing, had the scent of what I imagined was a beverage just poured from an old barrel stored in the basement. 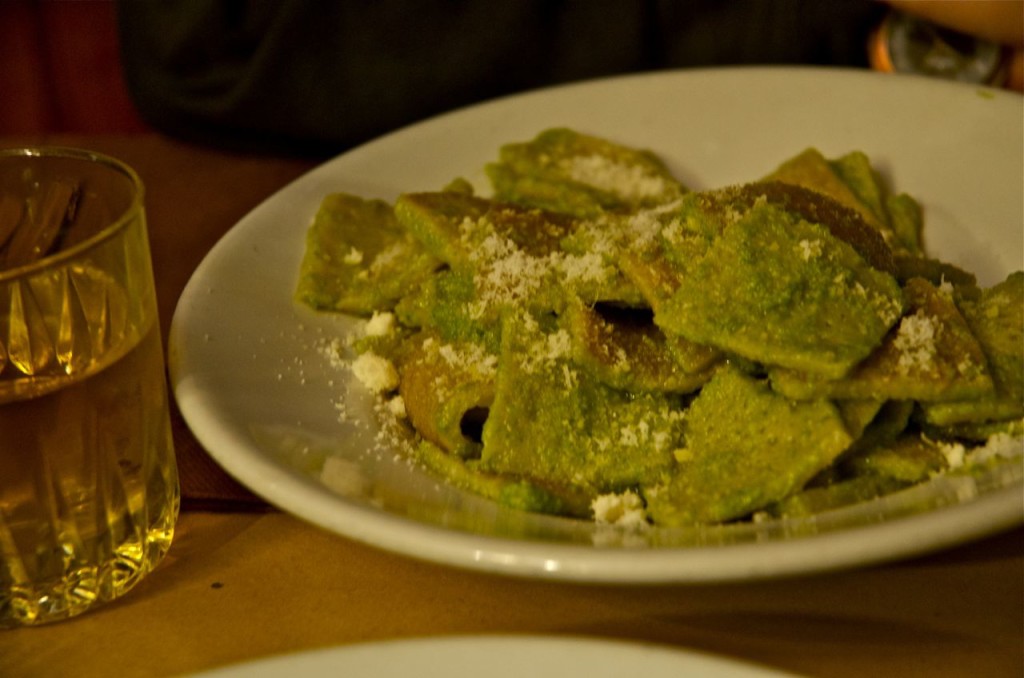 Then we ordered one of the most unusual pastas that I have ever had. I kick myself that I did not write down the name of this deliciously unique pasta. The waitress said, in her broken english, that it was a traditional pasta dish made of egg and locally ground wheat. It is rolled out onto a baking sheet and roasted in the oven to give it a toasted crust and then it is cut into squares and boiled. The result is a spongy, chewy pasta that holds up very well to the luscious piquant pesto sauce that was poured over the top. Sprinkled with a local sharp cheese the dish could not have been any more perfect and unique. 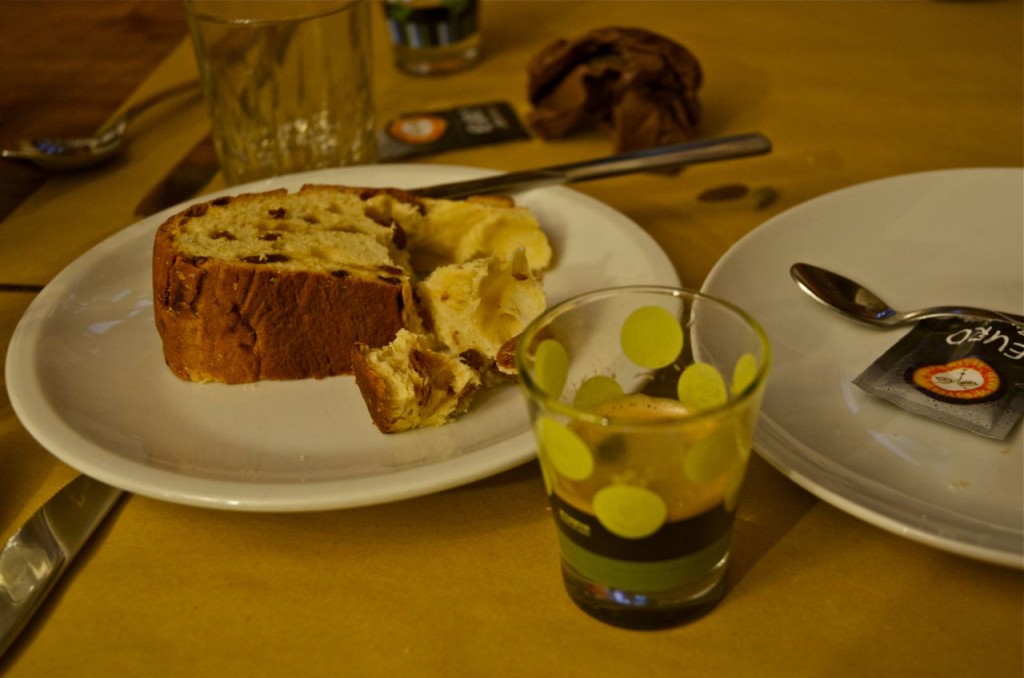 Dessert? Yes, please. We ordered a Genoa cake. The waitress said her mother, the very large woman we glimpsed from time to time scuttling about in the kitchen, made these cakes daily. We shared a large slice of this yeasty delight. The rich butter flavor, dotted through with sweet raisins worked wonderfully with our thick shot of espresso. 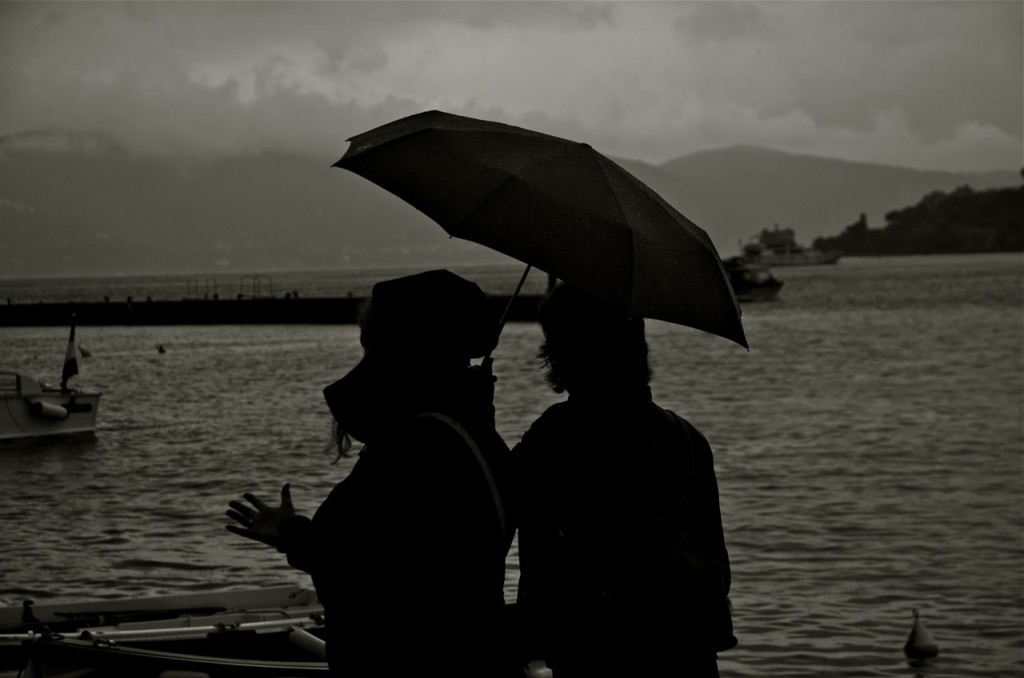 We left the restaurant totally satisfied and much to our disappointment the weather had not gotten any calmer. We opened the umbrella and headed for the shuttle that would take us back to the boat. It would be another evening on rough water, but that’s traveling, you never know what you will encounter around the next turn.

12 comments for “PORTOVENERE USED TO BE CALLED PORT OF VENUS”