Arriving in Old Town Gdansk was an interesting experience. The city dates back a thousand years and is a collection of buildings and monuments designed in Gothic, Renaissance and Baroque style. Originally the city was a Polish stronghold, erected by Mieszko I of Poland, but since then it has been ruled by Prussia (or Germany) with periods of self-rule as a ‘free city’. 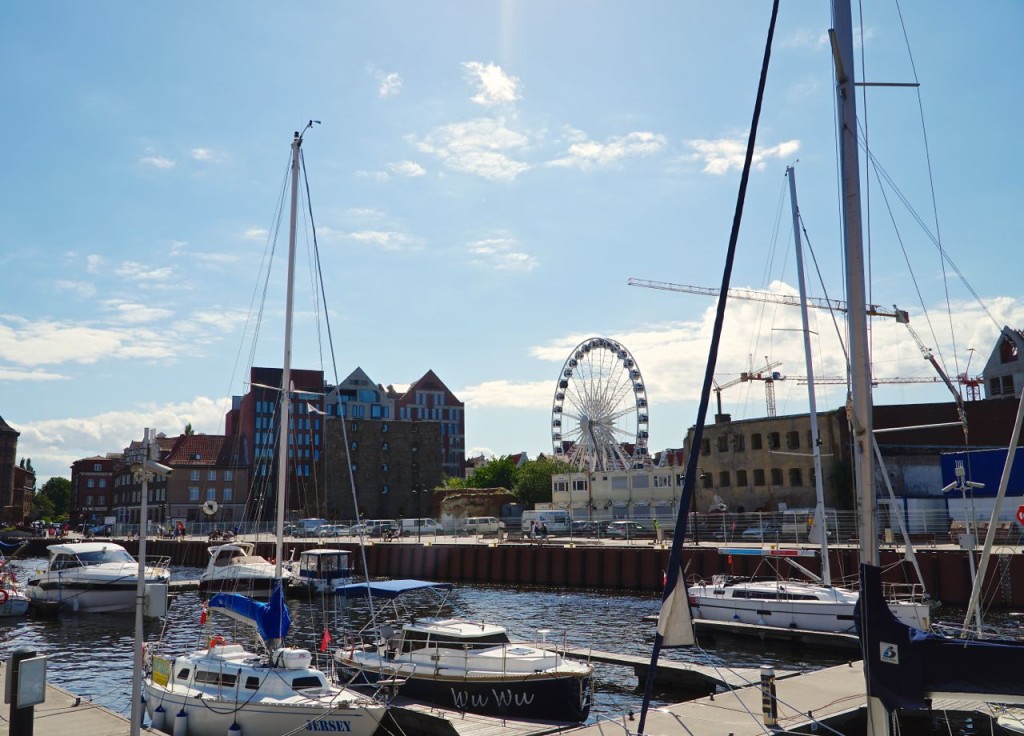 The weather could not have been more cooperative. The blue sky with soft, slowly moving clouds, comfortable warm temperatures. It was a perfect day on the Baltic Sea coastline. From across the harbor we sensed excitement. We had arrived on the last week of the St. Dominic’s Fair, the largest trade and cultural event in Europe. This festival, initiated by Pope Alexander VI in 1260, was an attempt of the Roman Catholic Church to persuade the citizenry to attend a ‘pardon mass’ and cut their stay in purgatory by one hundred days.

More than six-million people attend this three week celebration every year. The streets, clogged with people, food vendors, clothing merchants, tables filled with amber jewelry, trinket stalls and with new construction everywhere, maneuvering through the Old Town of Gdansk was a tricky endeavor. But the curious endure, and we walked the streets. 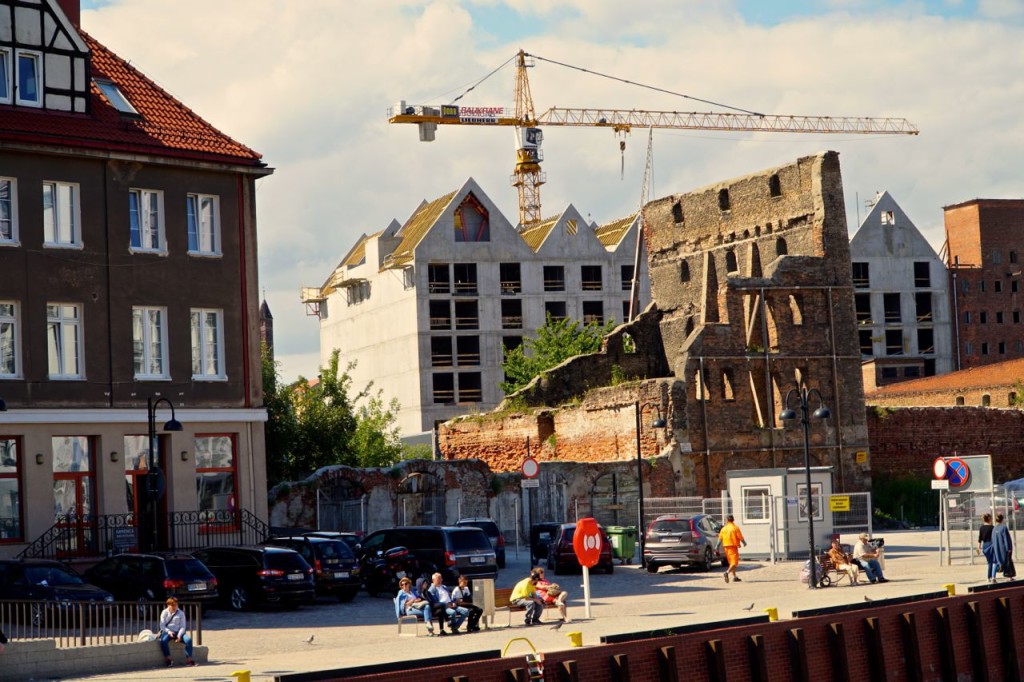 Gdansk has experienced much since it was first established in 980. In 1308, the Teutonic Knights were hired to rid the town of attacks by Brandenburg forces. Once the battle was over, the Knights took control of the area and continued to be a strong political influence for more than a hundred years. Gdansk, an ideally located port town, thrived as a result of increased exports of grain, timber, potash, tar and other good from Prussia and Poland. 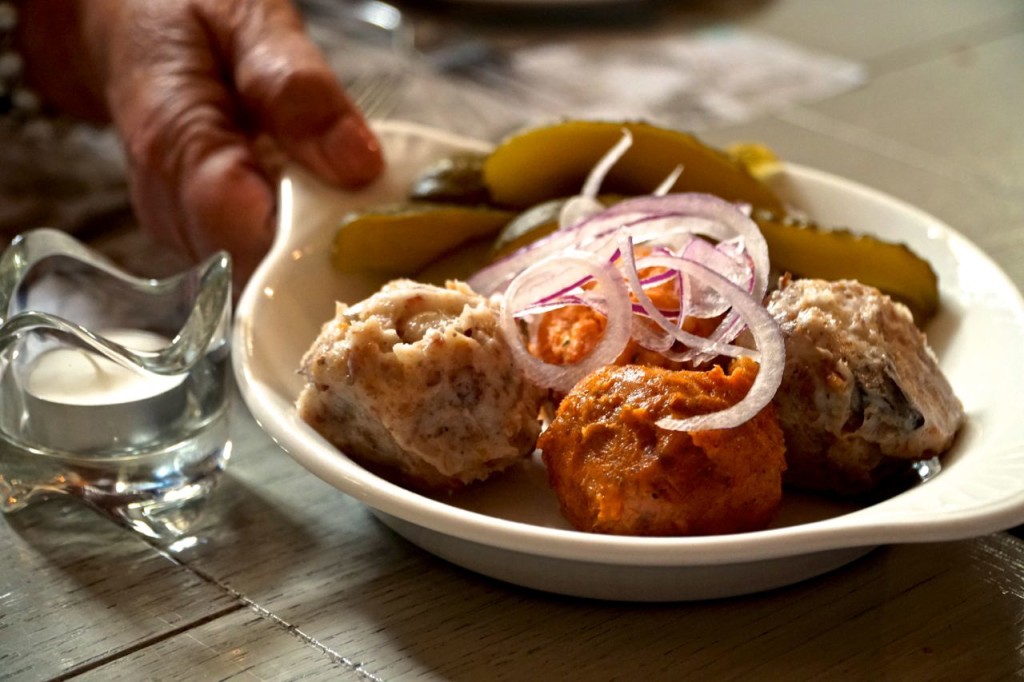 We took a lunch break in Gdansk. The entree of baked chicken breast, mashed potatoes and delightfully crisp broccoli was quite ordinary. However the appetizer was unique. We were served Smalec, a flavored lard spread. It is an old school food that has become a modern favorite. Lard actually contains less saturated fat than butter. We were given two Smalec flavors; one small snow ball sized glob studded with bacon and bacon grease, and an other dollop, seasoned with tomato, and I detected a bit of paprika. The Smalec is usually served with thinly sliced onion, crunchy dill pickles and hearty slices of dark rye bread. It was quite tasty. I’m not sure it’s something that I’d serve at one of my dinner parties, but you never know, it might strike my fancy one day to test the more hearty diner among my friends. 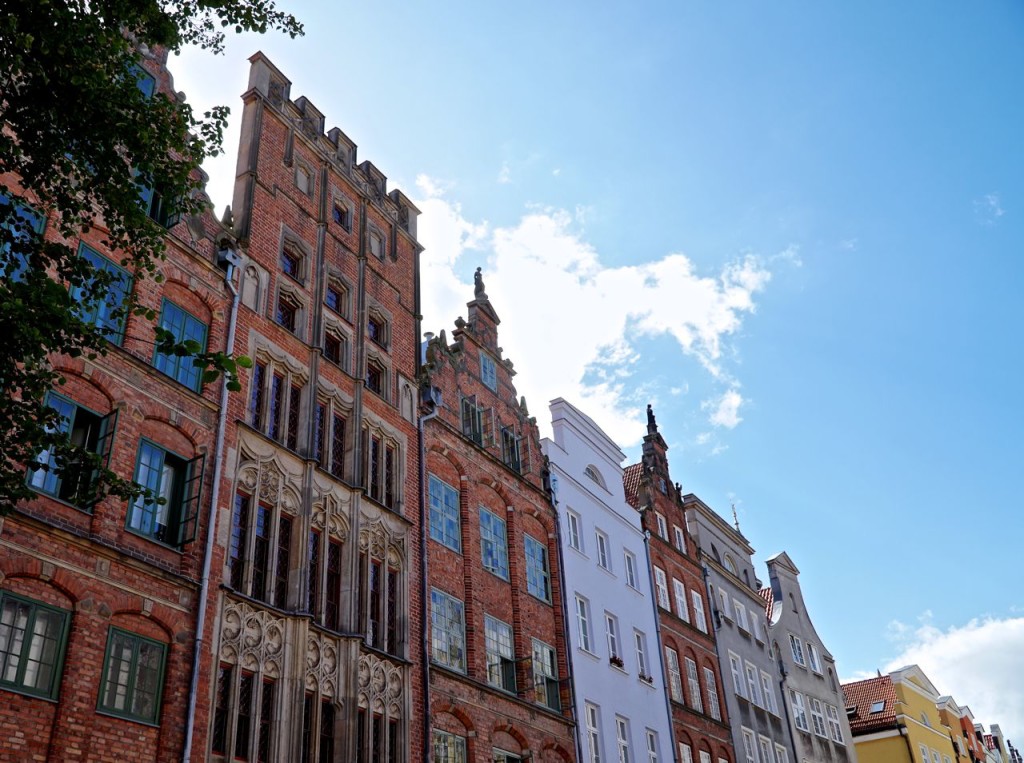 Ninety per cent of Gdansk’s city center was laid in ruin during WWII. The area has since been rebuilt, with most of it designed to replicate it’s original architecture. 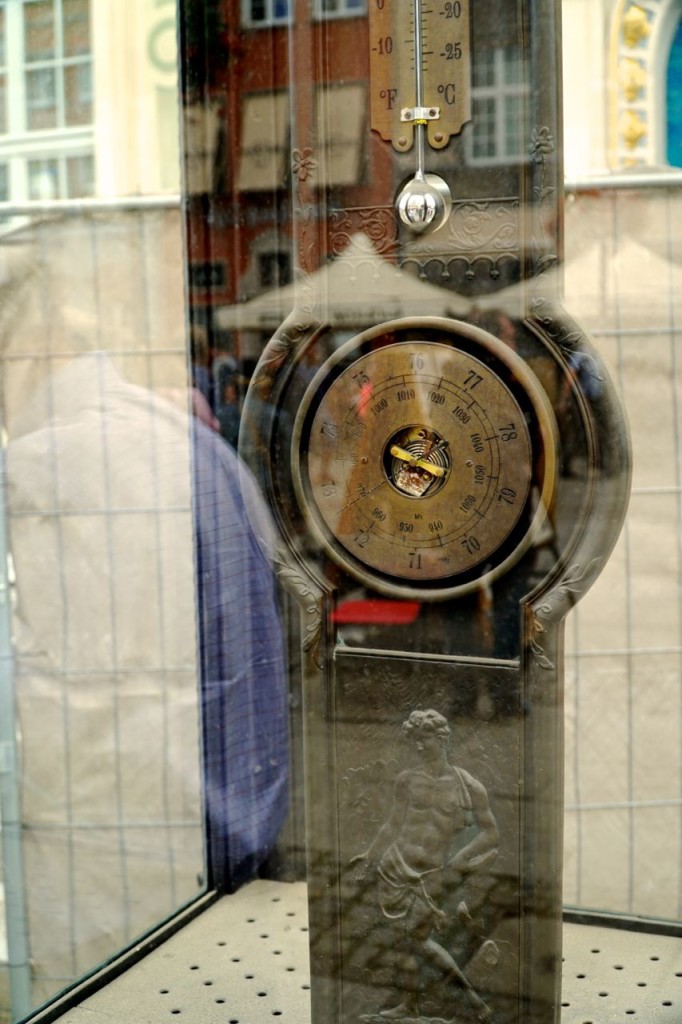 There is a monument to Daniel Gabriel Fahrenheit in the middle of a grand public area. Born in Gdansk in 1686, Fahrenheit spent most of his childhood traveling with his merchant father, spending most of his life in the Dutch Republic. When Fahrenheit was 16 years old his parents died when they unwittingly ate poison mushrooms. He secured employment with an Amsterdam merchant, and then in 1724, his famous temperature scale was completed. The monument is an exact replica of the original instrument and the people of Gdansk are proud to include Fahrenheit as one of their own. 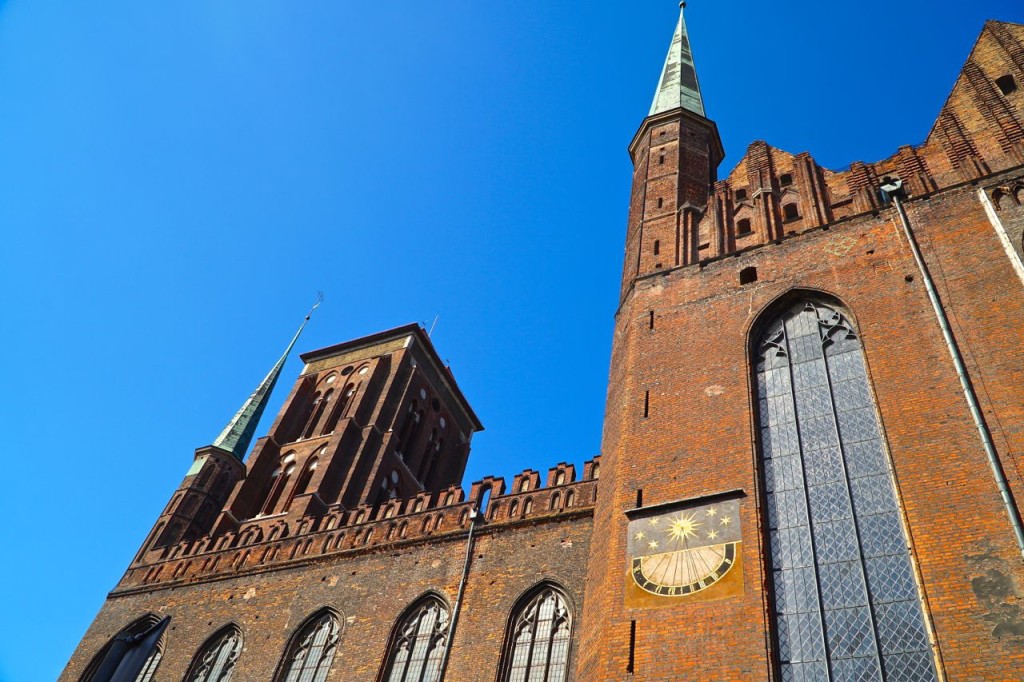 One of the highlights of Old Town Gdansk is St. Mary’s Church. It is the largest brick structure in the world and took 159 years to build. It’s deceptively plain exterior belies its bright spacious interior. 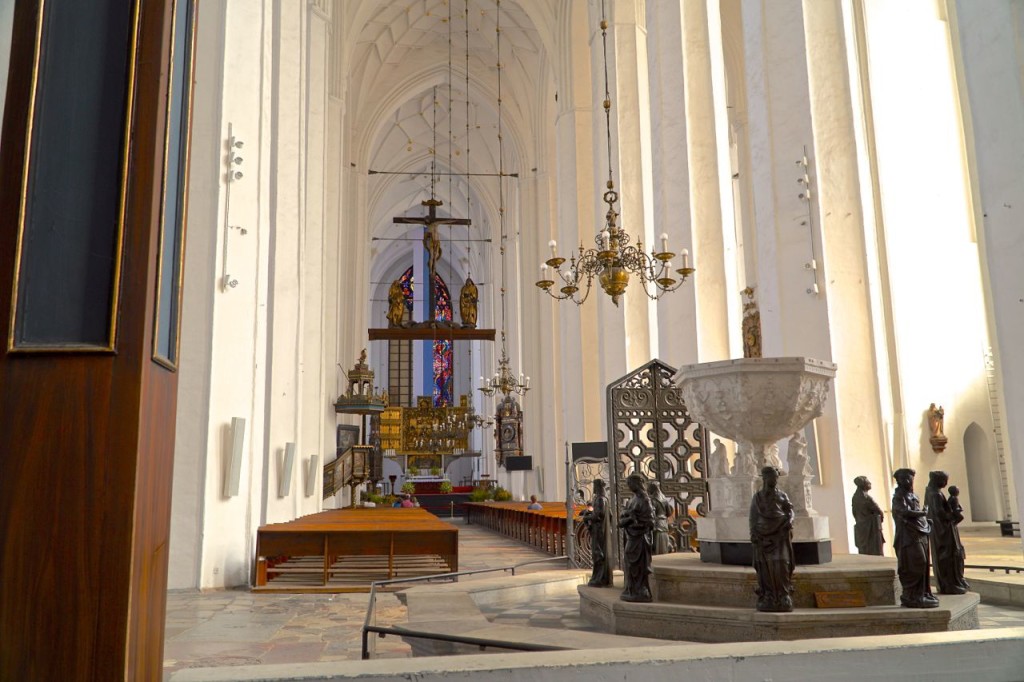 St. Mary’s Church is a Roman Catholic church. It’s construction began in 1379 and it has 30 chapels. In the 1500s the church was used for both Roman Catholic and Lutheran services simultaneously. The large open spaciousness of this facility can accommodate more than 25,000 worshipers. 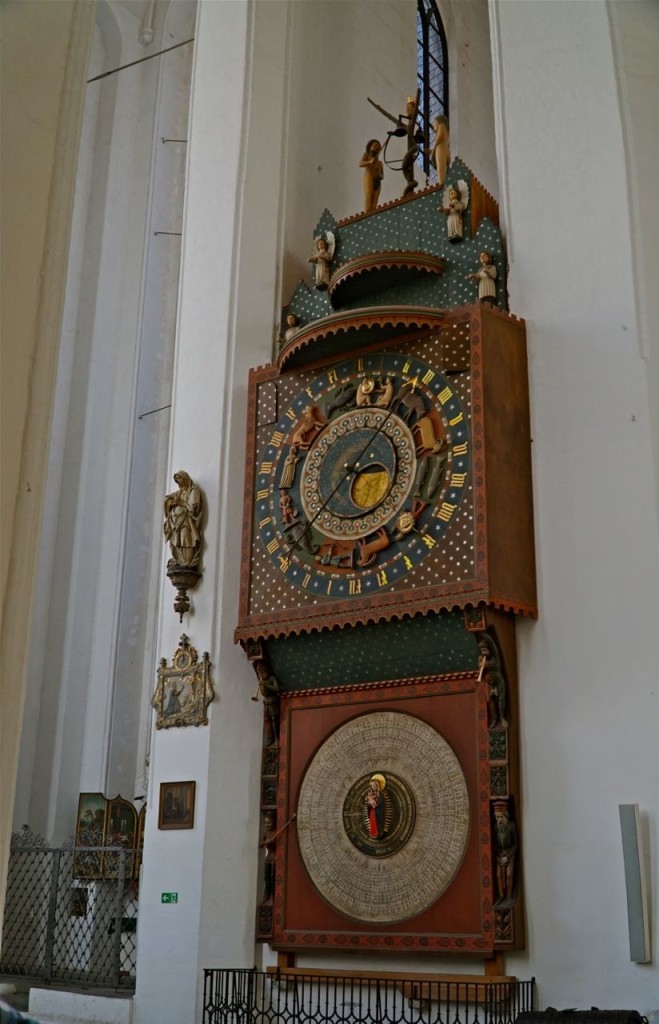 The church houses the famous Gdansk Astrological Clock, built by Hans Druinger in the 1400s. This mostly wooden masterpiece tracks the time of day, as well as, the position of the moon and the sun in relation to the signs of the zodiac. It even keeps a calendar of the saints. The clock features three distinct tiers, with a rotating parade of apostles, death and the three kings that each appear on top daily at noon. The middle tier consists of an intricate zodiac face, which in turn sits on top of the Saints calendar. Each section works in unison. 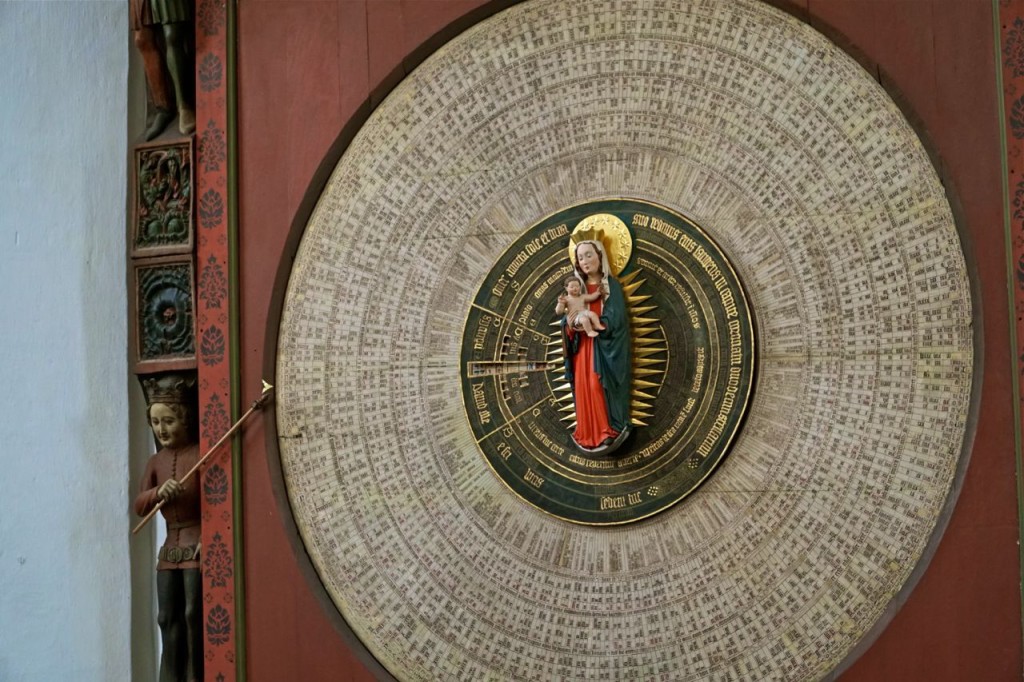 The clock stands 45 feet tall and may be the tallest working wooden clock in the world. According to legend, authorities blinded Hans Duringer after the completion of this masterpiece for fear that he might produce another clock that would rival the one he built for Gdansk. However, several years later Hans competed another astrological clock in a neighboring community. So as many legends go, this one is probably false, but makes a good story. 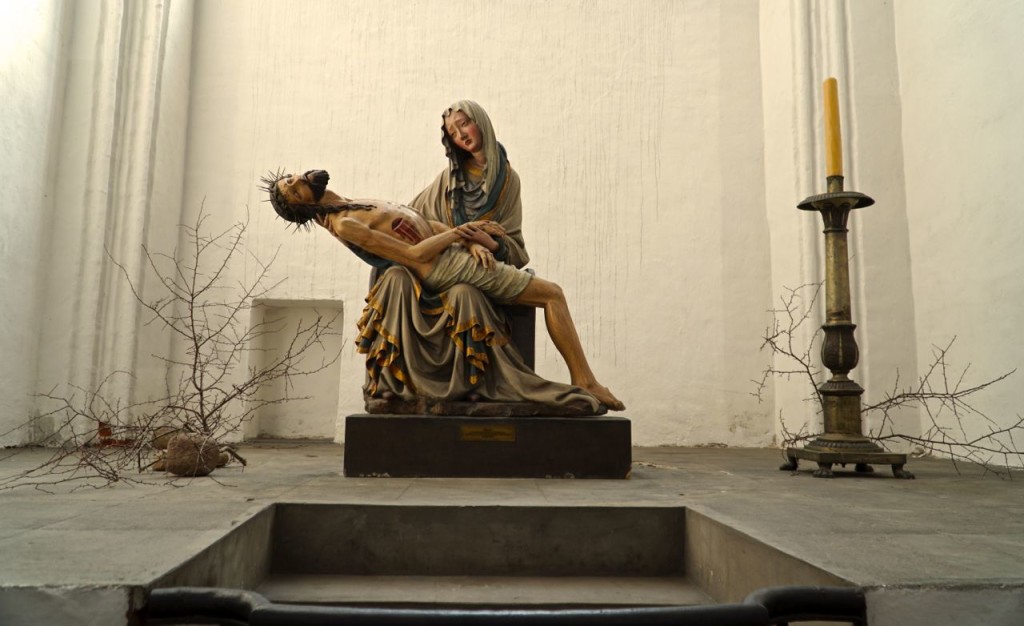 In the Chapel of St Rajnold, one of the 30 chapels in St. Mary’s Church, there is a depiction from the Passion of Christ, Mary cradling the dead of body Christ. It is a beautifully stark presentation, almost startling in the simplicity of sorrow.