It was time for us to leave Amsterdam. We would return in a couple weeks, but for now we were on a journey that would take us across the Baltic Sea and on to the shores that have only existed in my mind through history books, in novels of the masters, and in the long-told tales of myth and legend.

There was a full moon the first night on the Baltic Sea and it cast a silken light on the ragged water’s surface. Clouds spread across the night horizon in curdled nerves clusters of grey-white splashes. The sky seemed unwilling to turn black because, as far as it spread out before us, it remained blue. Even though in the distance it became a darker and darker shade, it never revealed the blackness that is often thought to be at the heart of night.

This soft night horizon belied what horrors we would deal with in the light of day. In the morning we were going to Gdansk, Poland where we would visit Stutthof, the first concentration camp that was established outside of Germany. My husband and I deliberated for quite some time before deciding to visit this horrible place. Why? Why would we want to take such a journey? To see for ourselves, to give testimony of its existence to others once we returned home? Even though we knew of its presence, did we want to be able to say, yes, this place existed? For whatever our initial reasons, I was filled with trepidation the closer we got to our destination. 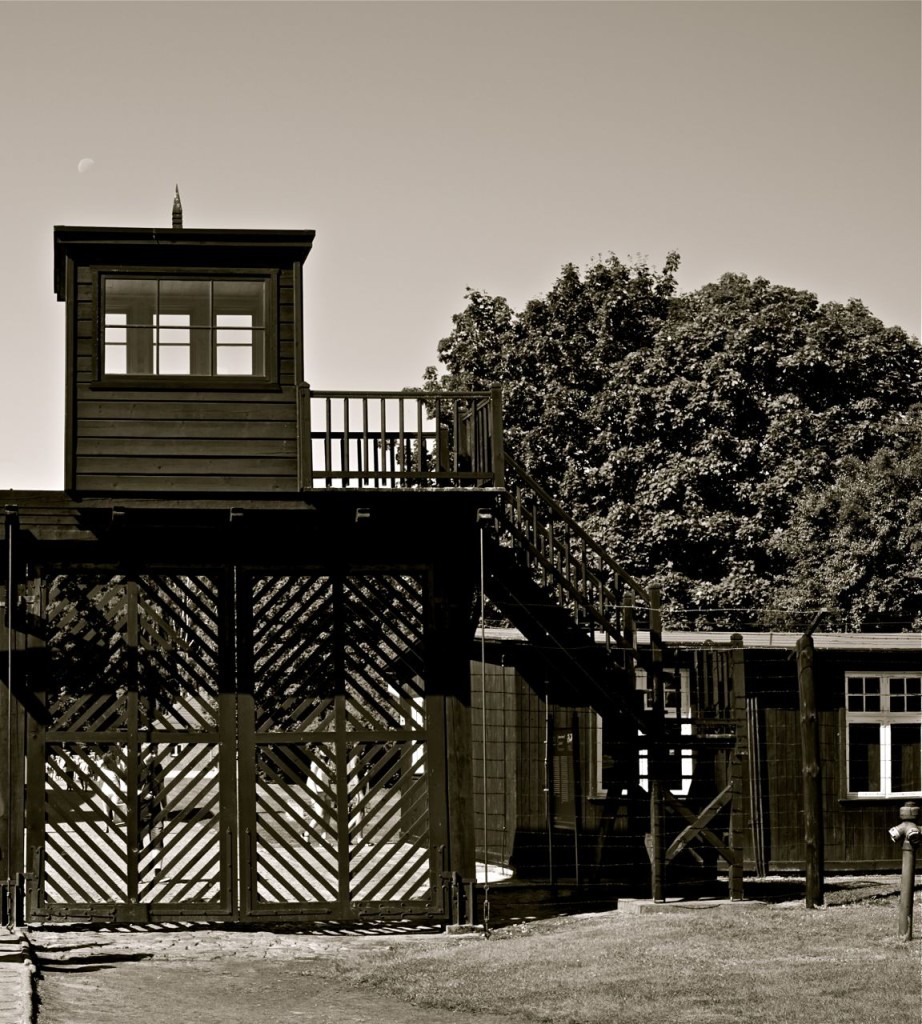 The first section of the camp that greets the visitor is the reconstructed “Death Gate”. More than a million Jews, Gypsies, the lame, homosexuals, Mennonites were brought through this gate. Not everyone was murdered or died here, but no one escaped and more than 65,000 people died in this camp. 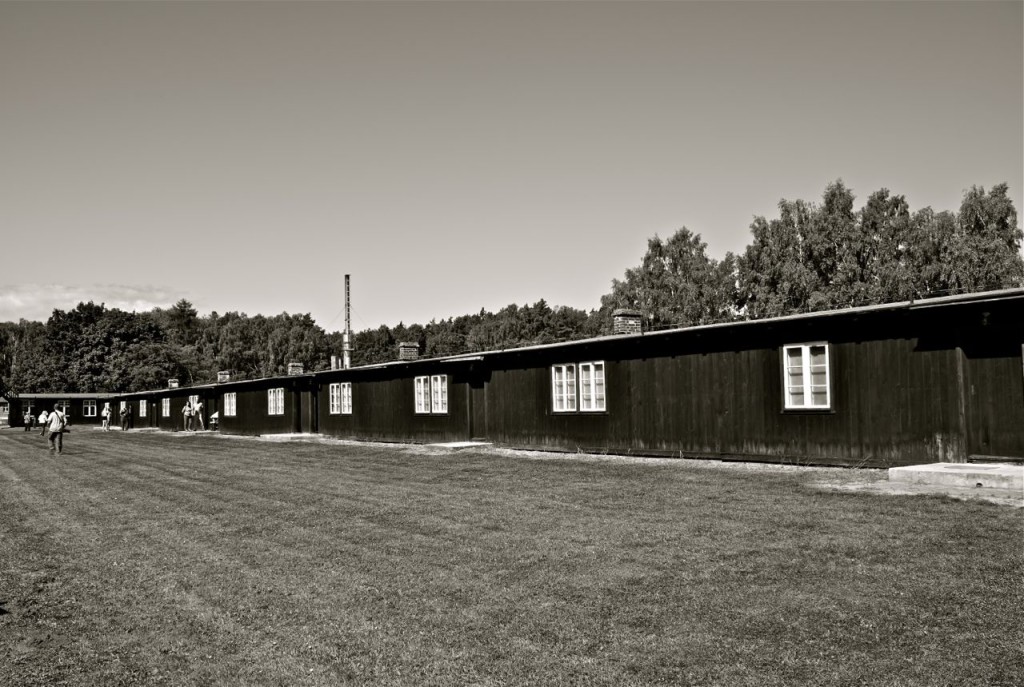 Only one barrack has been left standing and is now a museum of holocaust memorabilia. I’ve chosen to present this blog post in black and white photos. The exhibition did not transport me back in time, but my heart, my breathing, my senses only periodically observed this transformation of horror in color. The green of the trees that have stood silent witnesses for centuries, the seeded manicured grass fields now a lush carpet thrown over the atrocities committed against humankind, all this became a blacken retrospect and as I created this blog post, I knew it must be presented in something other than the blue of the sky or the sweetness of the warm day.

This long wooden building is a sanitized structural representation of what this place was, a holding-pen for those enslaved. It was a one-time hospital, a horror that never intended to heal. This the only building that was one of 30 barracks that housed the inmates, as they were called. This building is scrubbed clean of the actual signs of atrocities. There are no horrific photos on display. There is a softness about the place now. Even in the scanty photos of the ‘inmates’ on display has a semblance of normalcy. These photographs surely must have been taken of the incarcerated as they were when they first arrived because they would all end up as a bag of bones at liberation, or in a deathly heap of ashes. 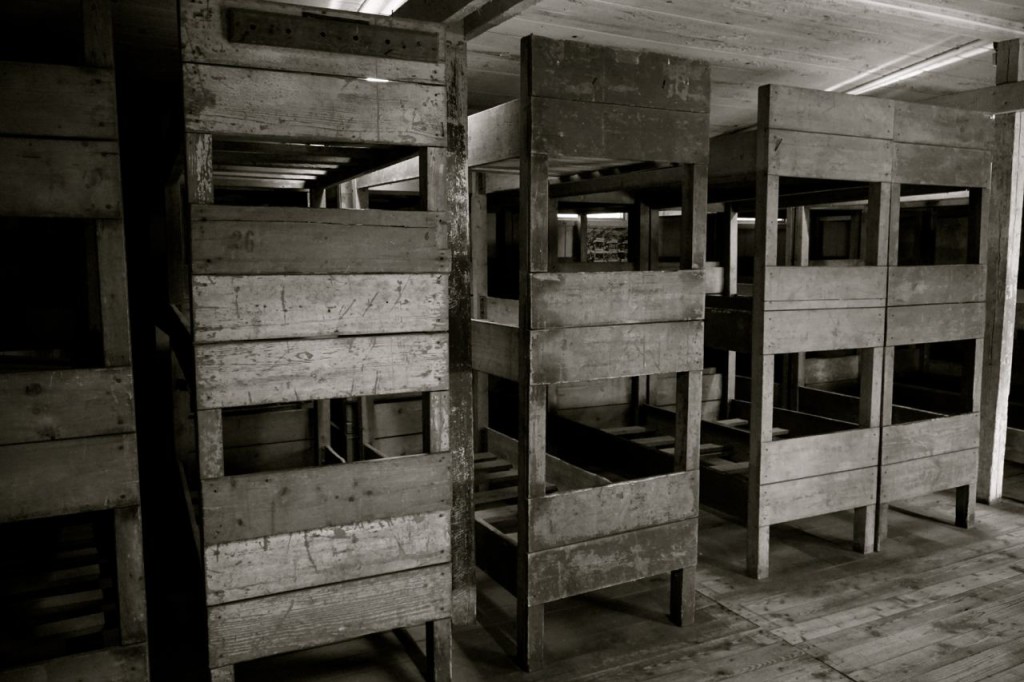 The sleeping quarters have been set up as a replication of what it was like to live in the camp. Some of the beds may be original, but there are definitely newly constructed beds as well. The fresh unmarred wooden beds stand next to scarred, aged beds, some still with numbers, numbers that helped in the Nazi bookkeeping, the counting of soulless individuals, some who would soon be dead. 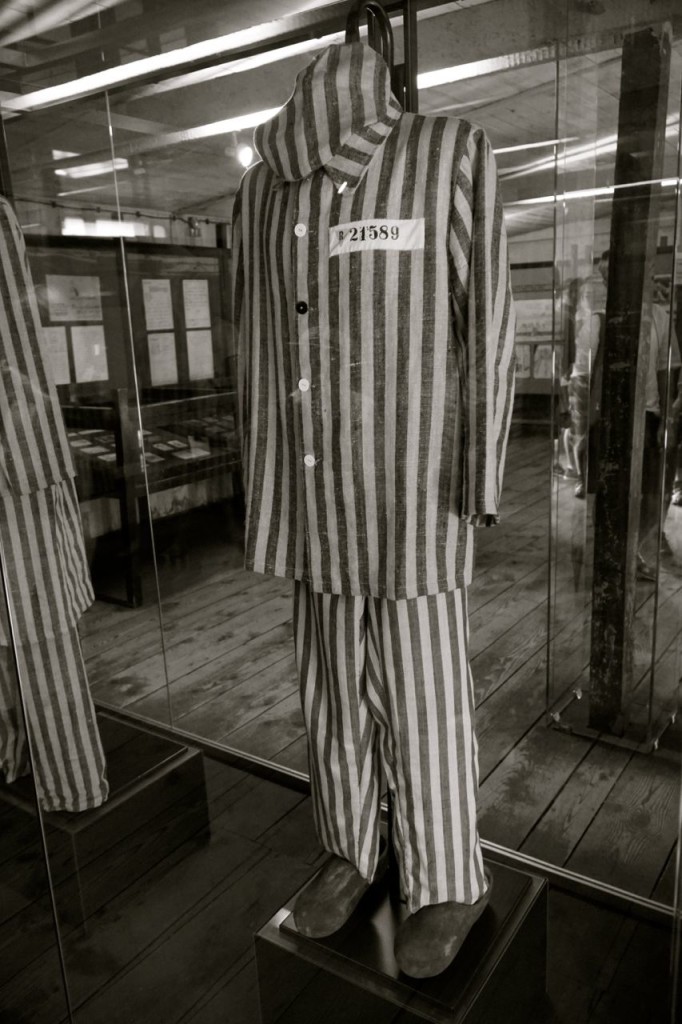 On display are the uniforms, encased inside museum glass, a past washed and cleaned, no blood, no mud, no traces of what horror this garment might have been dragged through. Would anyone visit this place if the stains of the horror of that time were depicted as they really were? 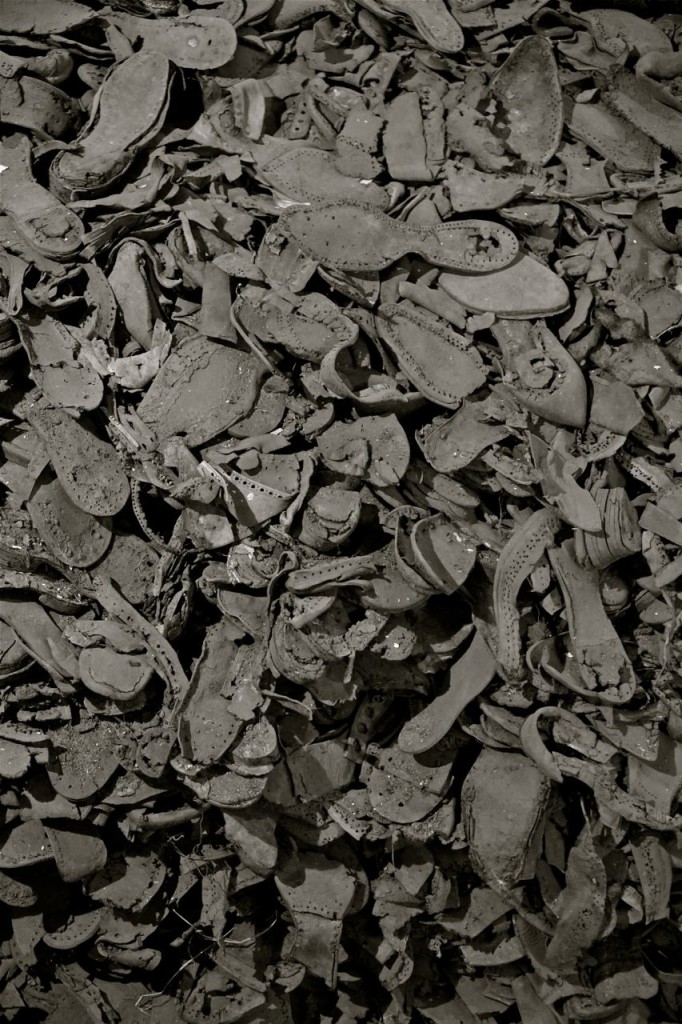 When this camp was liberated, a mountain of leather shoes was discovered. All metal was removed from them, the thread, the stitching that kept the soles together long ago rotted, now this heap of  footwear is only a reminder of how easily a person, a man, a woman, a child can be discarded. This pile of remnants of humanity serves as a specter of what unimaginable horror we as humans are capable of doing to each other. 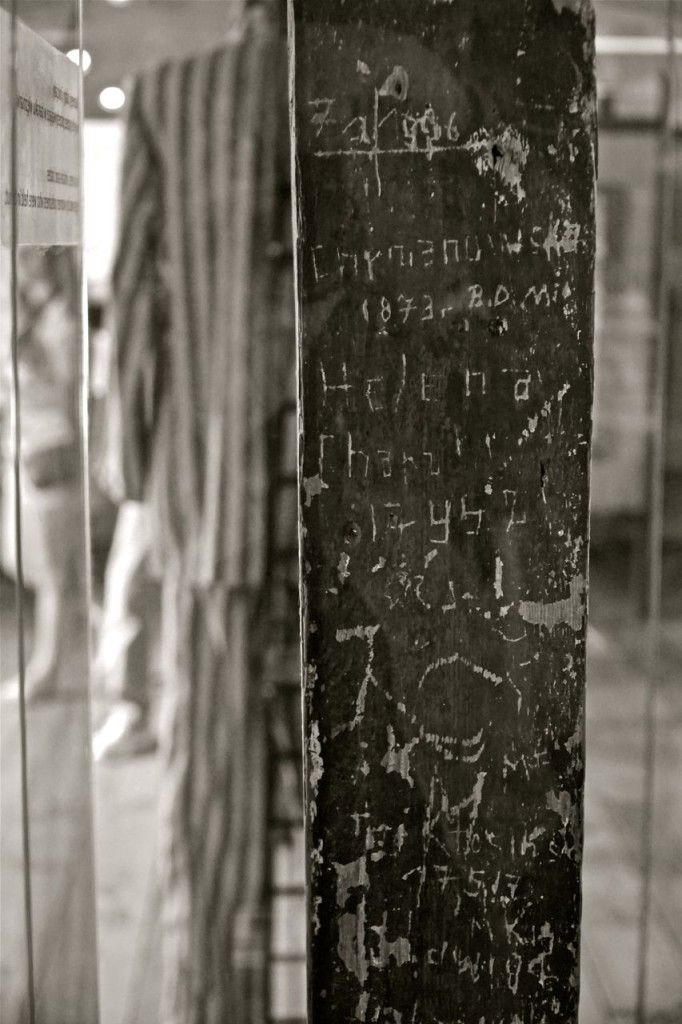 There was a piece of board in a museum glass case, a display of graffiti scratched into the wood by desperate inmates, struggling to not be swallowed up by their experience, struggling in their dispair not to be forgotten. 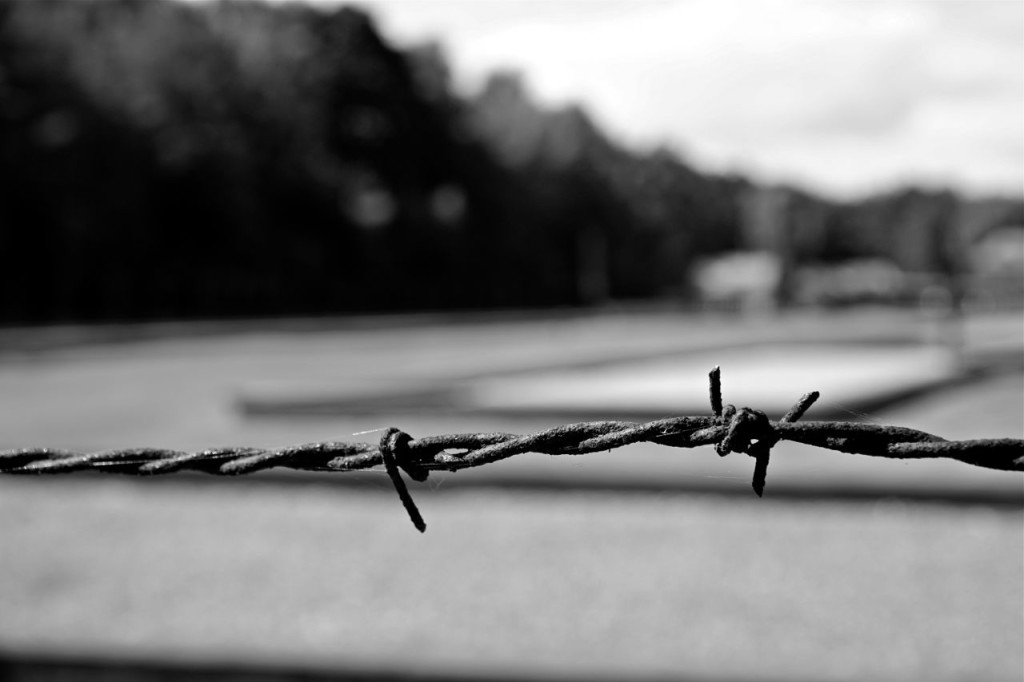 Rusted barbed wire stretches across the edges of the camp and along areas that would have been off limits to the living. 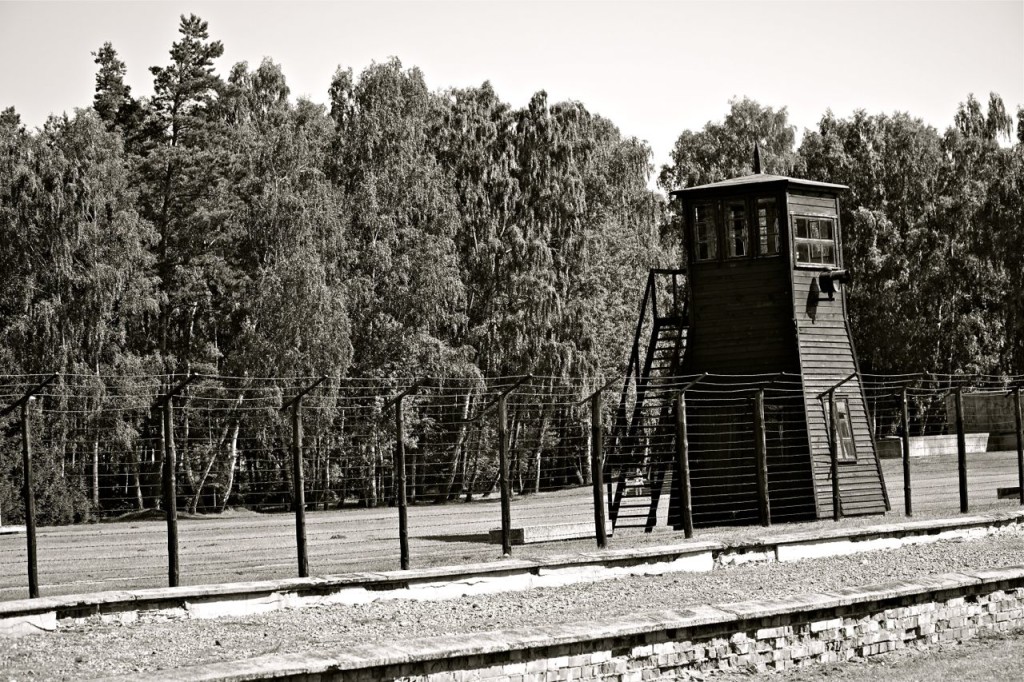 The camp was flanked by a number of guard houses, manned by armed Gestapo. I stood for some time looking at the structure, listening, the sound of the trees rustling in the distance, the songs of late summer birds, a rhapsody that made shivers trickle across my shoulders, realizing that at any moment had I been an inmate of this place in a time before I was even born, that a gun would have been pointed at me all hours of the day and night. 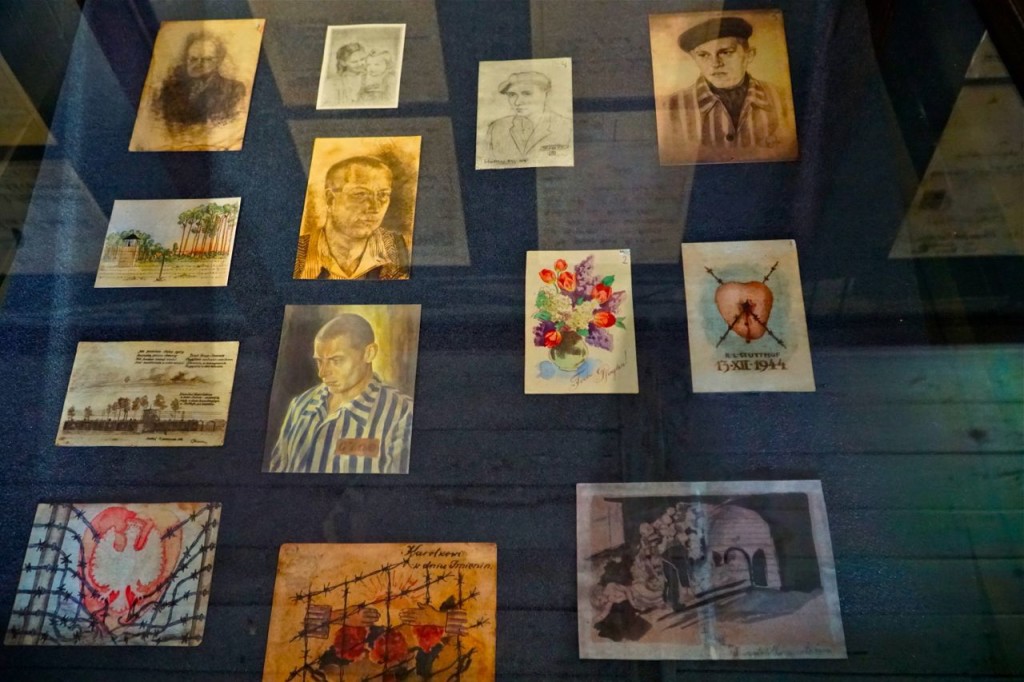 In one room of the barracks my heart melted when a touch of humanity trickled in to the exhibition; the artwork of the inmates. This was not black and white to me. It was living color created by the dead and dying. 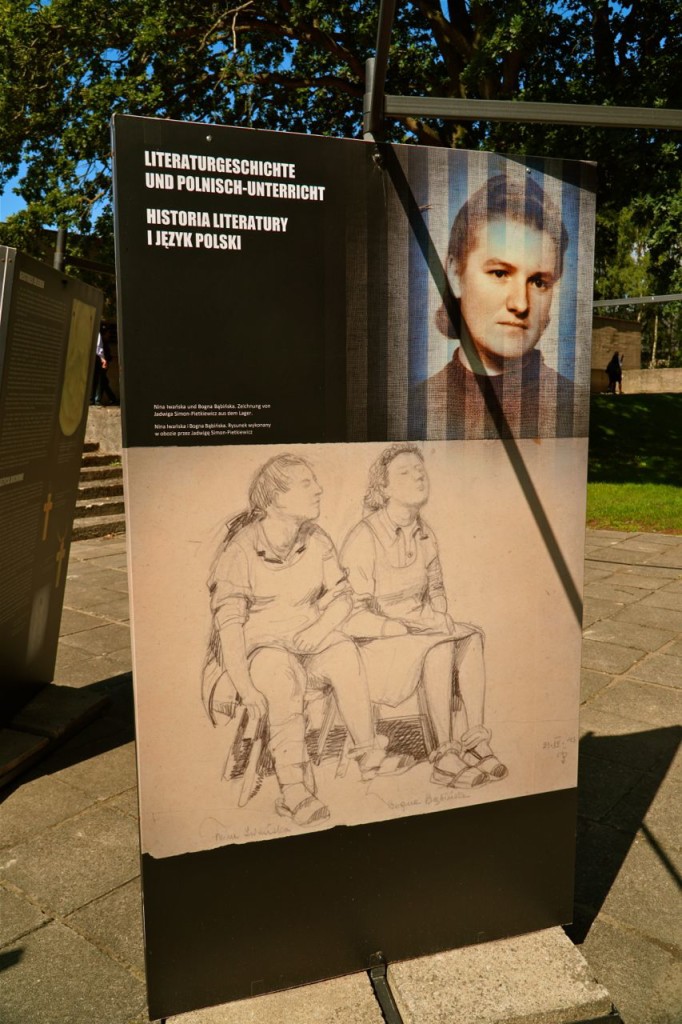 In one area of the camp there is a courtyard with large placards displaying pictures of the camp inmates with art work they had created. I took a photograph of only one of these displays. It touched me. I didn’t know why at the time. Two women sitting, a common situation. But then as I look at this photo now, I realize that nothing must have been a common experience during that time.

I am writing this blog post comfortably sitting in my NYC apartment, thousands of miles away from that replica of a concentration camp. When I looked at the photographs I took at the camp, this photograph made my heart jump. It reminded me of a woman I met years ago, a Polish Jew who had survived such a camp. She told me many stories about what it was like for her. She was the only survivor of her family. Her scars were deep. Her life was never normal again even though she was liberated and she remarried, the horror of what happened to her had attached itself to her soul.

She has since passed away. Over time, I was eventually able to incorporate one of her remembrances into one of my short stories. Once you have finished reading this blog, I invite you to read the story, A Piece of Bread. Here is the link. 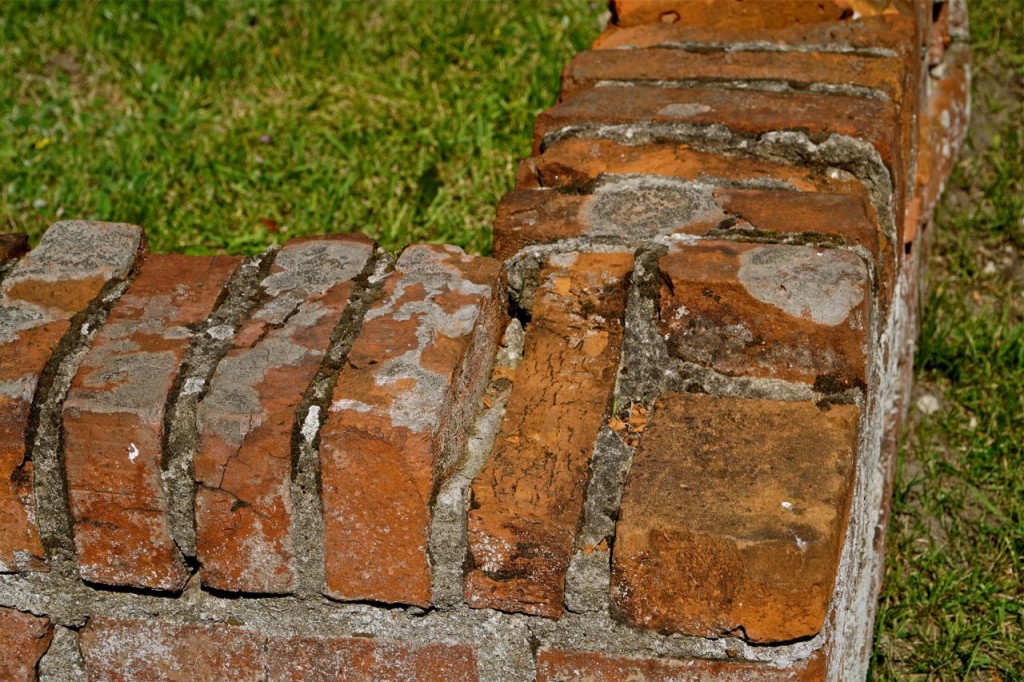 All but one of the barracks in the camp has been torn down. In several locations scanty foundations have been left standing. The brick, cracked, weathered and now infested with a fungus will eventually deteriorate, crumbling into dust. I wondered if in time this place will one day fall into such ruin that the Polish government will have to decide to either rebuild it. Or will they decide that enough time has passed and that the land could be put to better use?

Even after going this far from my home to see a concentration camp, I could not bring myself to go inside the crematorium. Over the years of reading stories about how efficient the process of eliminating humans had become for the Nazi regime, the inside of this building was really not something that I wanted to see. It turned my stomach. It broke my heart. It made me angry. 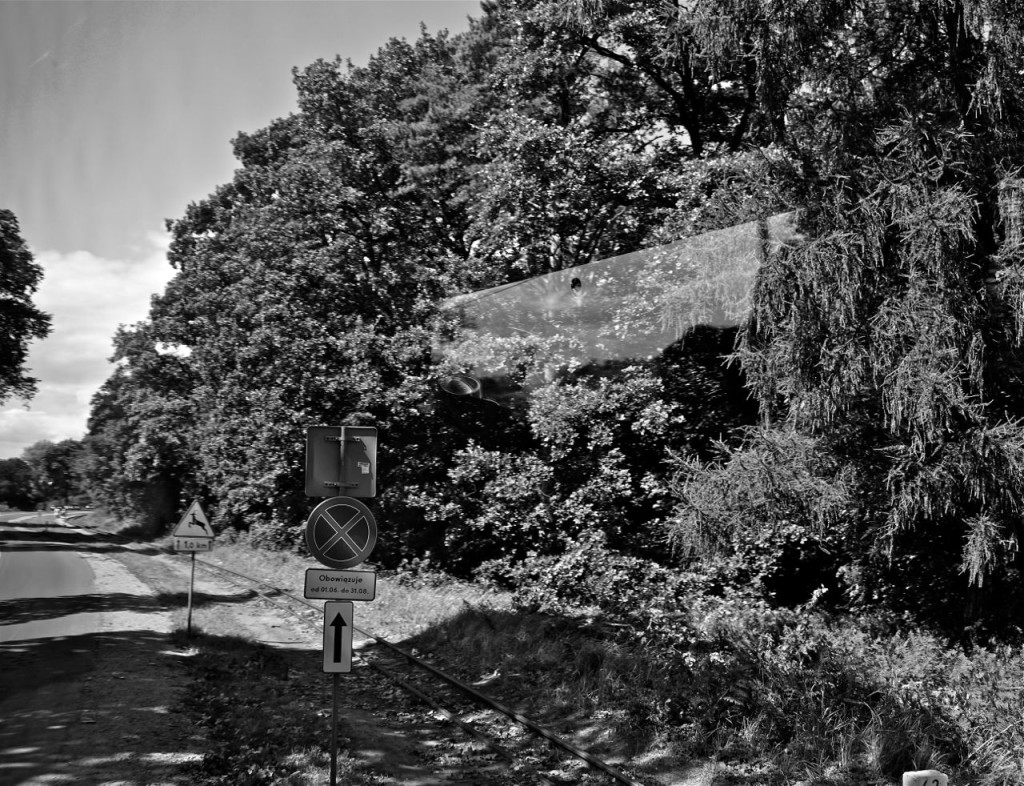 Walking to the bus that would take me back to the reality of modern life, I was thrown once again into a sense of dread when I realized that the railroad tracks that ran parallel to the road, were the same tracks that carried over a million people to this place of horror. There is now a warning at the curbside that an animal might jump across the road. There were warnings back then, warnings of atrocities, warnings that the unthinkable could be happening somewhere in the deep forest in Germany, in Poland, but only a few were listening.