THIS BLOG POST APPEARED IN MARCH 2016. HOWEVER SOMETHING WENT TERRIBLY WRONG WITH THIS WEBSITE, IT CRASHED AND THREE OR FOUR POSTS WERE DELETED. I’M REPOSTING THIS ONE AGAIN. THE OTHERS THAT WERE DELETED WILL SOON ALSO BE REPOSTED.

These days I am up to my eyeballs in the publisher’s editorial comments of my novel PUSHING WATER. I’m hoping for a publishing date sometime this winter. This novel has already been through many revisions. The section that I just revised took place at The One Pillar Pagoda. It’s an interesting location though before I tell you about this unique pagoda, let me give you a brief synopsis of PUSHING WATER:

When Sarah, an American expat working as an archivist for the French Colonial government in Hanoi, discovers the body of a murdered Vietnamese coworker, her life is changed forever. Angry at the authority’s lack of interest in the case, she decides to take matters into her own hands and find the killer. When she uncovers a devastating secret French Colonial government communiqué hidden in a packet of poetry, she suspects this led to the coworker’s murder. The more Sarah digs into the death, the more entangled she becomes in Vietnamese rebel activity.

Her life is further complicated by the arrival of an old friend, Julia, who brings remembrances of a past Sarah would rather forget. Then Albee, Sarah’s part time lover, shows up. He claims to be an archeologist working on a dig in China, though she suspects this is a cover for his communist activities. Unable to discover the killer of her coworker and heartsick at the death of another friend, Sarah decides to leave Hanoi. It is now December 1941, The Japanese have forbid any ships to leave the Hanoi harbor or for airplanes to take off from the airstrips. It is soon learned that Japan has attacked Pearl Harbor. 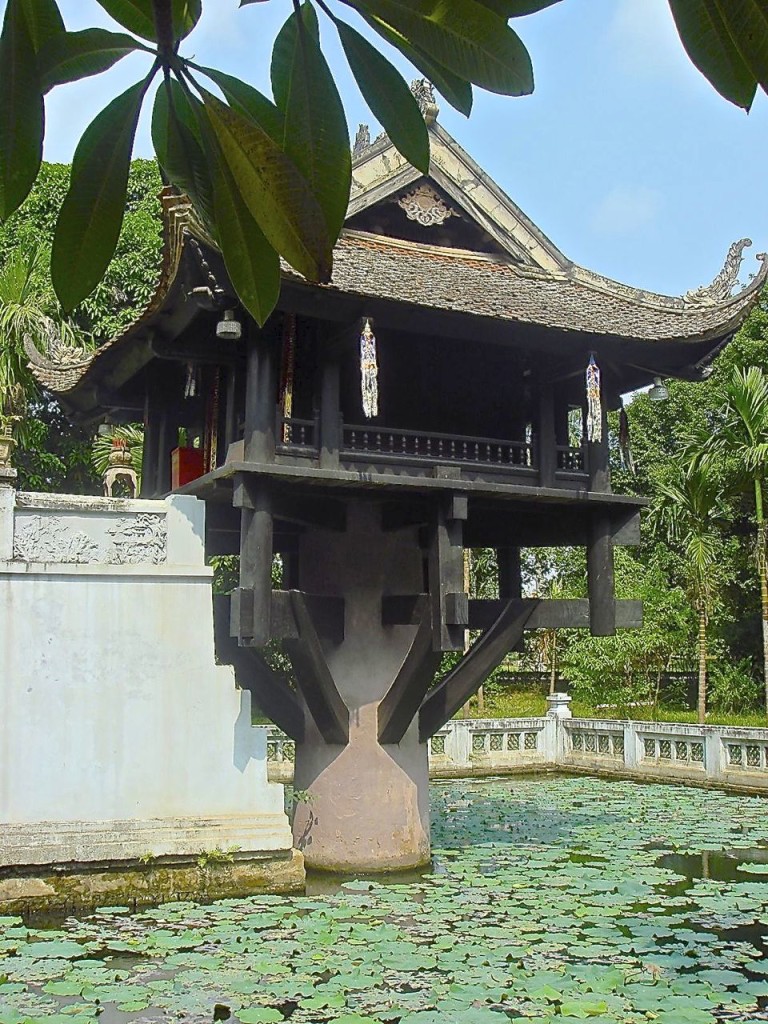 Emperor Ly Thai Tong, who ruled from 1028 to 1054, built the One Pillar Pagoda. According to the court records, Ly Thai Tong was childless. He dreamt one night that he met the bodhisattva Avalokiteshvara, who, while seated on a lotus flower, handed him a baby son. Ly Thai Tong married a peasant girl. She bore him a son. In 1049 the emperor so happy to have a son, constructed the temple on a pillar in the middle of a lotus pond, similar to the one he saw in his dream.

The Pagoda was located in what was then the Tây Cấm Garden in the capital Thăng Long (now known as Hanoi). Before the pagoda was opened, prayers were held for the longevity of the monarch.

The temple was renovated in 1105 by Emperor Lý Nhân Tông. A bell was cast and an installation was attempted in 1109. However, the bell, which was regarded as one of the four monumental works of Vietnam at the time, was much too large and heavy, and could not be installed. Since it could not be tolled while left on the ground, it was moved into the countryside and deposited in farmland adjacent to Nhất Trụ Temple. This land was widely inhabited by turtles, so the bell came to be known as Quy Điền chung, which means Bell of the Turtle Farmland. 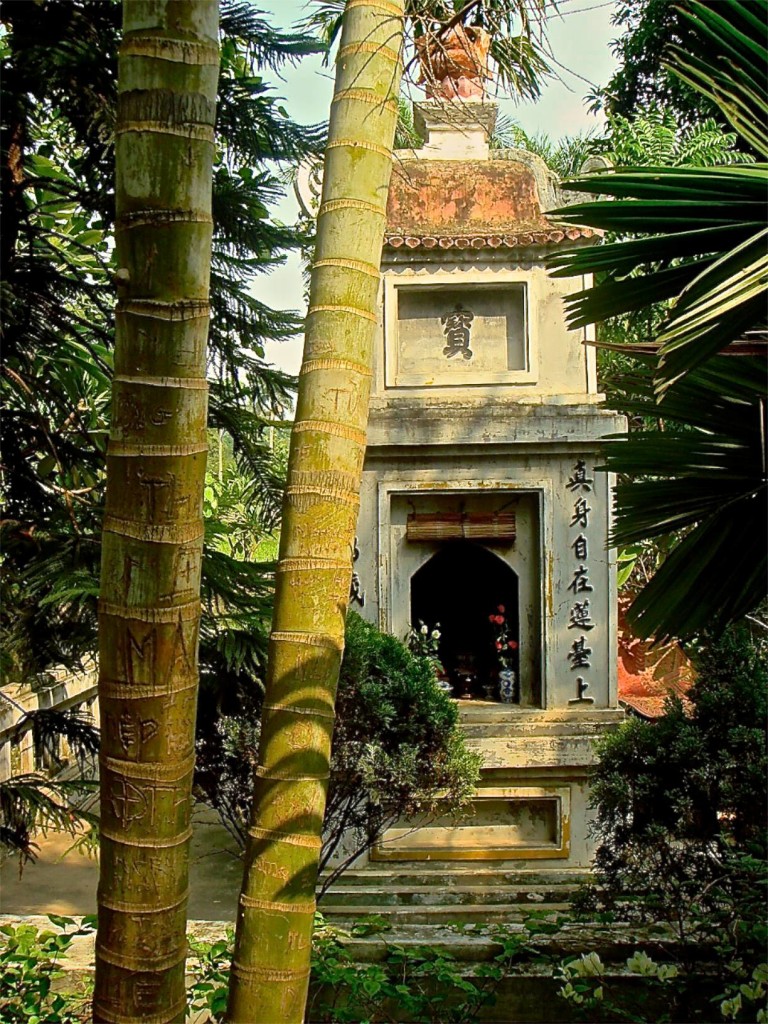 At the start of the 15th century, Vietnam was invaded and occupied by the Ming Dynasty. In 1426 the future Emperor Le Loi attacked and dispersed the Chinese forces. While the Ming were in retreat and low on weapons, their commanding general ordered that the bell be smelted, so that the copper could be used for manufacturing weaponry. 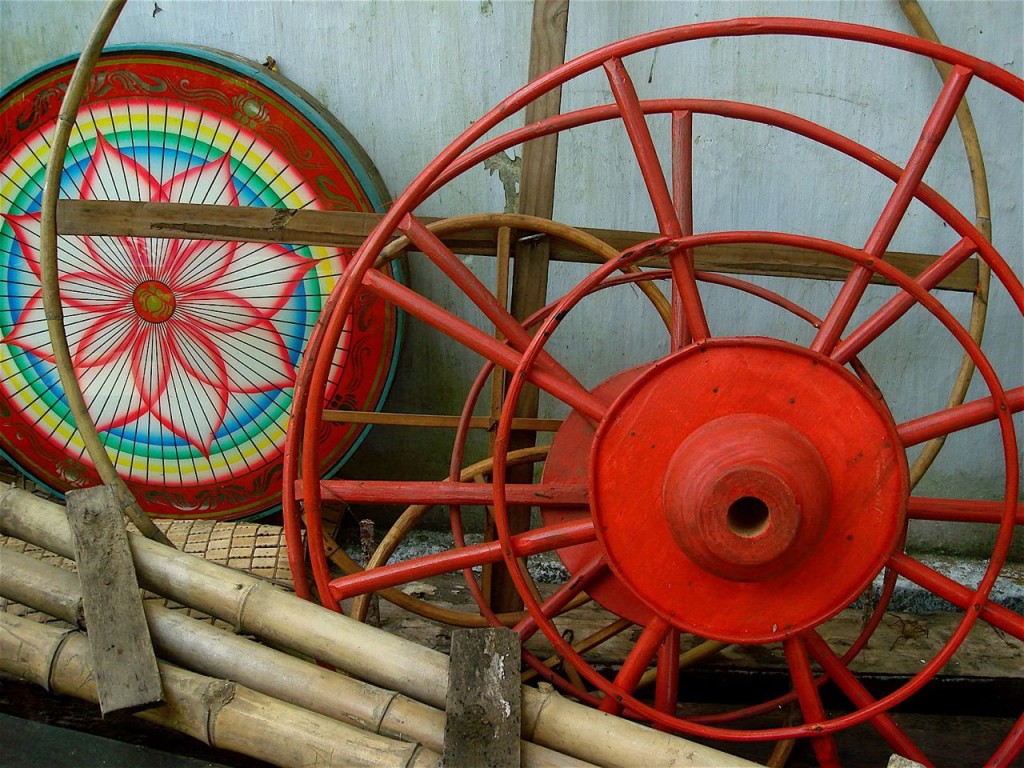 The temple was initially built of wood on a single stone pillar 1.25 m in diameter. It was designed to resemble a lotus blossom, the Buddhist symbol of purity. In 1954, the French Colonial forces burned the pagoda before withdrawing from Vietnam after the First Indochina War. The pagoda was rebuilt in 1955. 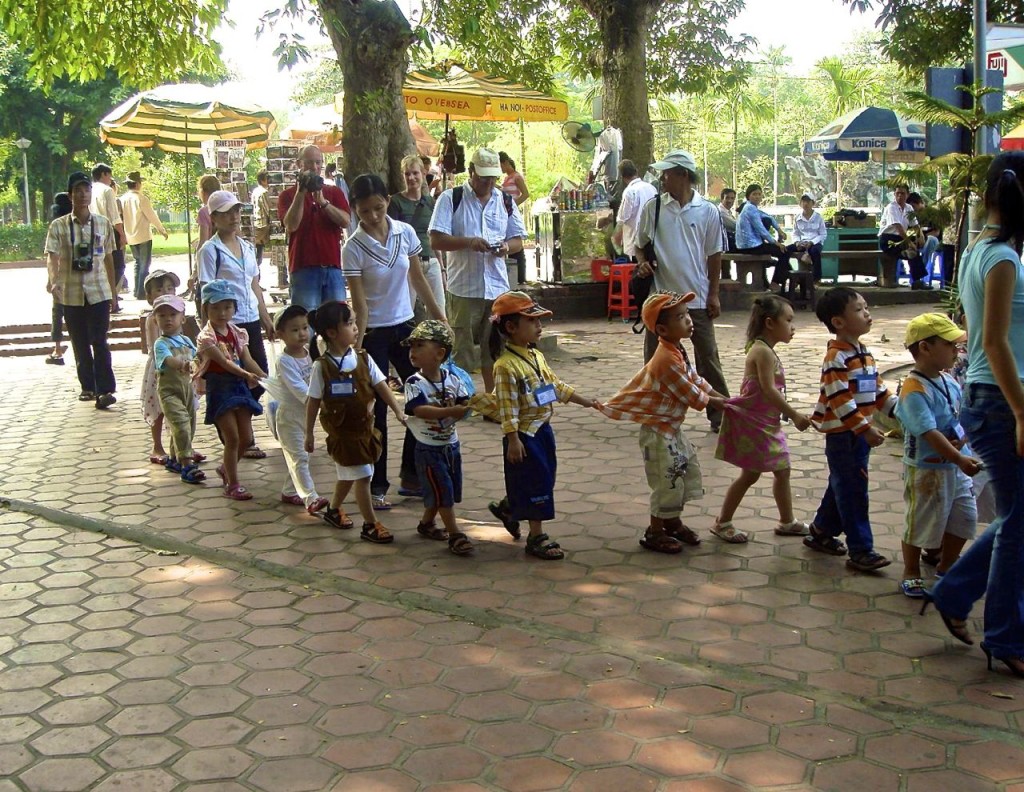 At the time my novel takes place (1939-1942) the One Pillar Pagoda is only seen as a shrine, a place of worship. The pagoda seemed a perfect location for two of my characters to have a clandestine meeting in the middle of the night.

This pagoda has become more than just a shrine. It is one of Hanoi’s major tourist destination. It’s located in a lovely park. Lush green foliage provides shaded areas for locals and tourists to get in out of the burning sun. Not only tourists visit this site, but school children also make pilgrimages to this unique pagoda.

9 comments for “ONE PILLAR PAGODA”