Just for the fun of it, a friend, Susan, and I decided to head over to the Whitehorse Tavern to see if we could pick up on the haunted vibes that were supposed to be hanging around this place. Neither one of us are seasoned ghost hunters. The tavern  just seemed an interesting place to start our exploration of the West Village on this lovely summer day. We grabbed our cameras and were off on a photo adventure. 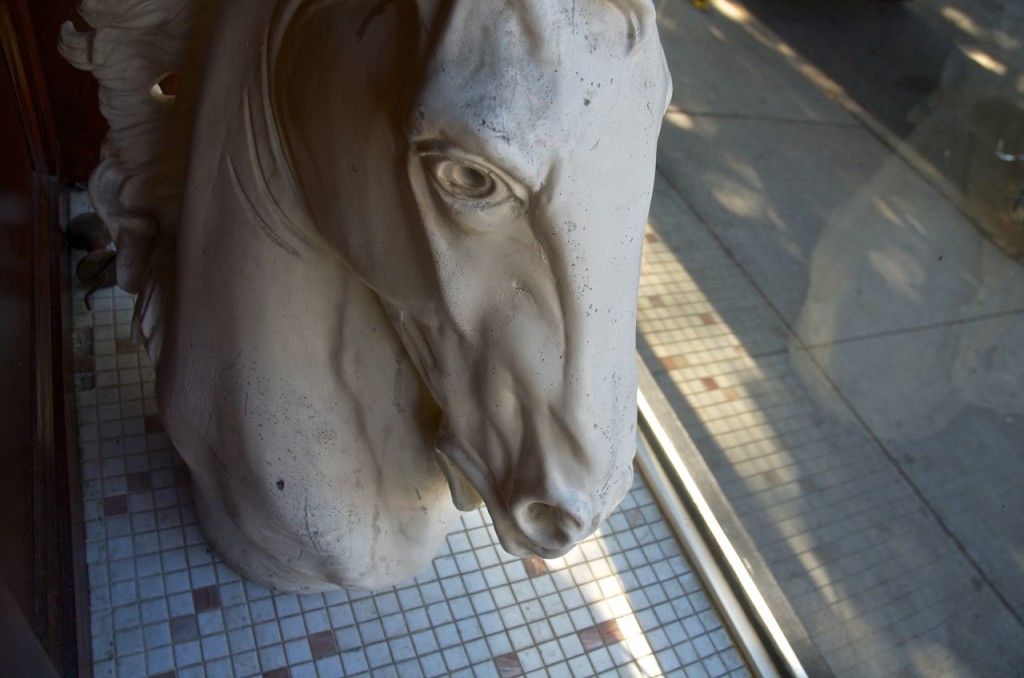 The Whitehorse Tavern was first established in 1880. Because of it’s proximity to the Hudson River and flop houses in the area, it was mostly frequented by longshoremen. For many years it was known for its heavy drinking crowd and was a place where the raucous drinkers would regularly get thrown out onto the street. 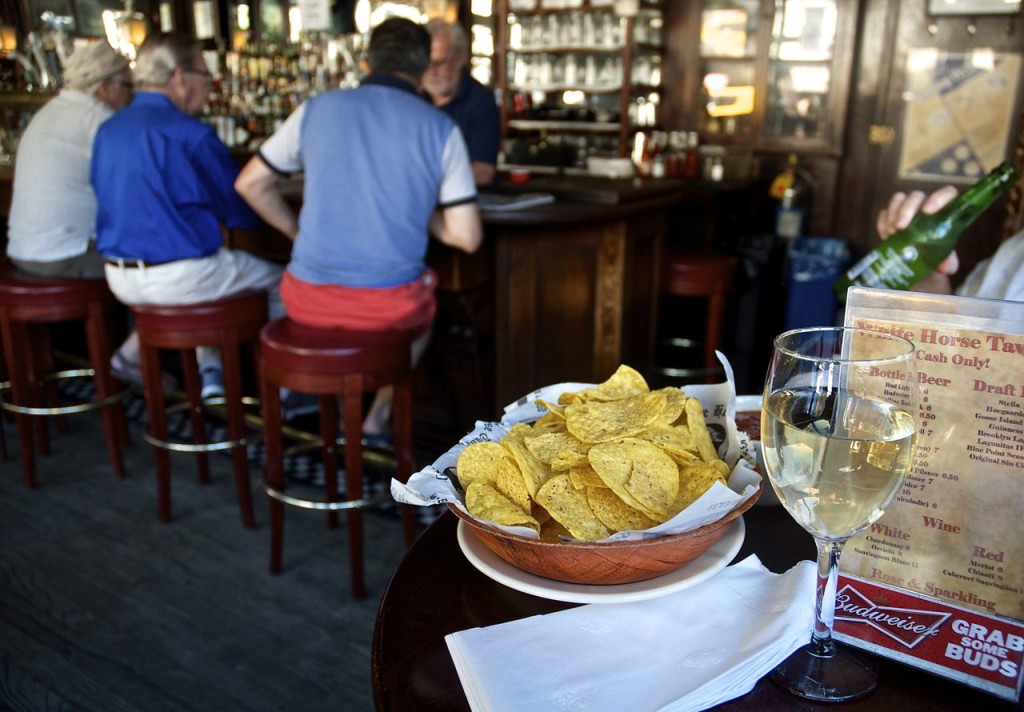 There didn’t seem to be any unusual vibes when Susan and I first walked into the place, even though it is notorious for unusual happenings. Ghostly happenings. We found a table and ordered chips and salsa. I had a glass of white wine and Susan got a beer. There was a TV on either end of the bar. One TV was broadcasting the soccer tournament, the other a Yankee game. A full contingency of enthusiastic viewers sat at the bar. Periodically someone shouted or banged a fist on the bar, which indicated either a goal or a good hit.

Susan and I settled in, waiting, wondering if perhaps we might see something unusual. 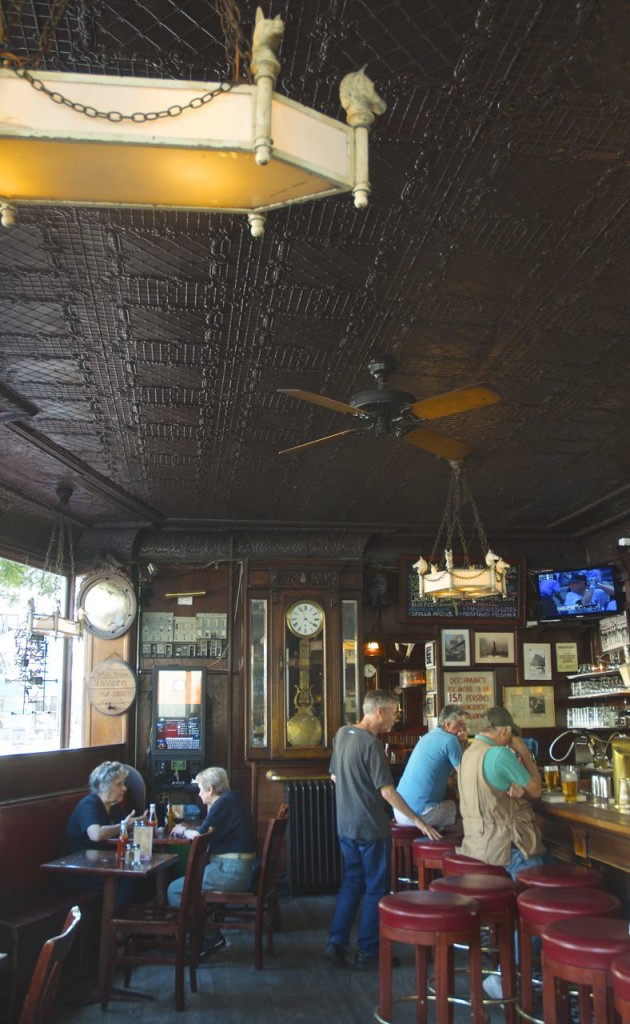 It doesn’t look like this bar had changed much over the years. It has a wonderfully old wooden feel. Perhaps the bar stools have been reupholstered, but the tables look pretty ancient and the lighting and the clock look to be original.

It wasn’t until the early 1950’s when writers like Dylan Thomas began to hang around the place, writing his poetry while he swilled down goblets of whiskey, that this tavern got popular with the Bohemian crowd. Not only Dylan Thomas, but James Baldwin and Norman Mailer did a lot of drinking at this tavern and I’m sure many drunken and heady discussions went on here. Bob Dylan, Jim Morrison and singers like Mary Travis from Peter, Paul and Mary were part of the regulars during the 60’s.

Even with all the energy from so many different creative writers, artists and musicians, Dylan Thomas is the only spirit that appears to have stuck around in the Whitehorse Tavern.

Dylan Thomas lived in the Chelsea Hotel, an easy walk from the bar. He turned the tavern into his personal writing room. He arranged manuscripts that he was editing so that the edges of the papers were parallel to the table, while the table had to be positioned at a perfect angle to his chair. He could not write unless everything was set exactly to his liking. Only then would he drink and write. Dylan traveled between the US and Wales, his home land, several times between 1950 and 1953. During that time his health deteriorated and his drinking problem increased. On November 8, 1953, he arrived at the Whitehorse Tavern. He was not in good health though as the legend goes, Dylan Thomas drank 16 shots of whisky that night and then staggering home to the Chelsea Hotel, fell into a coma and died the next day. 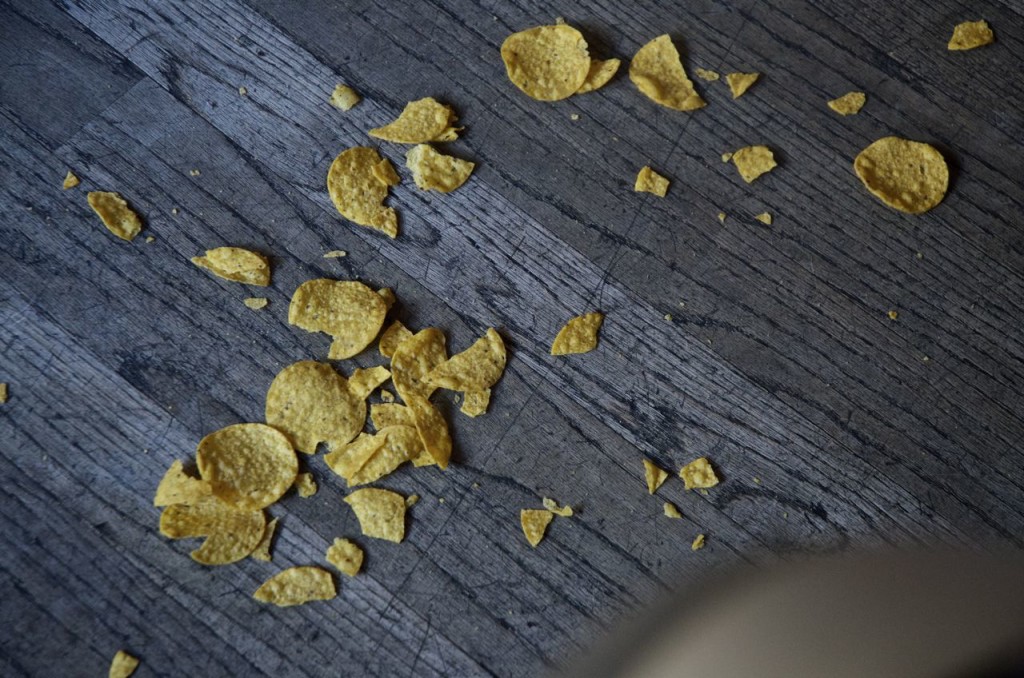 The spirit of Dylan Thomas has been spotted on many occasions, sitting at a table, standing by the large clock or leaning on the bar staring blankly out into the room. The staff frequently come to work and have had to rearrange tables and chairs, because during the early morning hours after closing time, the tables have all been arranged, some say, the way that the old ghost of Dylan Thomas would have done.

Susan and I nibbled our chips. We ordered another round of drinks; not much was going on. Then it happened. Our dish of chips fell onto the floor. It was as though someone had whisked it off the table. Several men sitting at the bar turned. They looked down at the mess. “Don’t touch it,” one guy shouted. He turned back to watch the TV. Someone came with a broom and dustpan. “This happens all the time,” he said.

Ghost or no ghost, we had no idea. We finished our drinks, took up our cameras and left.

The West Village is full of lovely cozy streets. Gentrification has been going on for years. Brownstones go for millions of dollars and many rich and famous people live in this neighborhood. There are still some old-timers living here and I have quite a few friends who used to live in this area. Susan said she rented an apartment not far from the Whitehorse Taverner when she first struck out on her own. 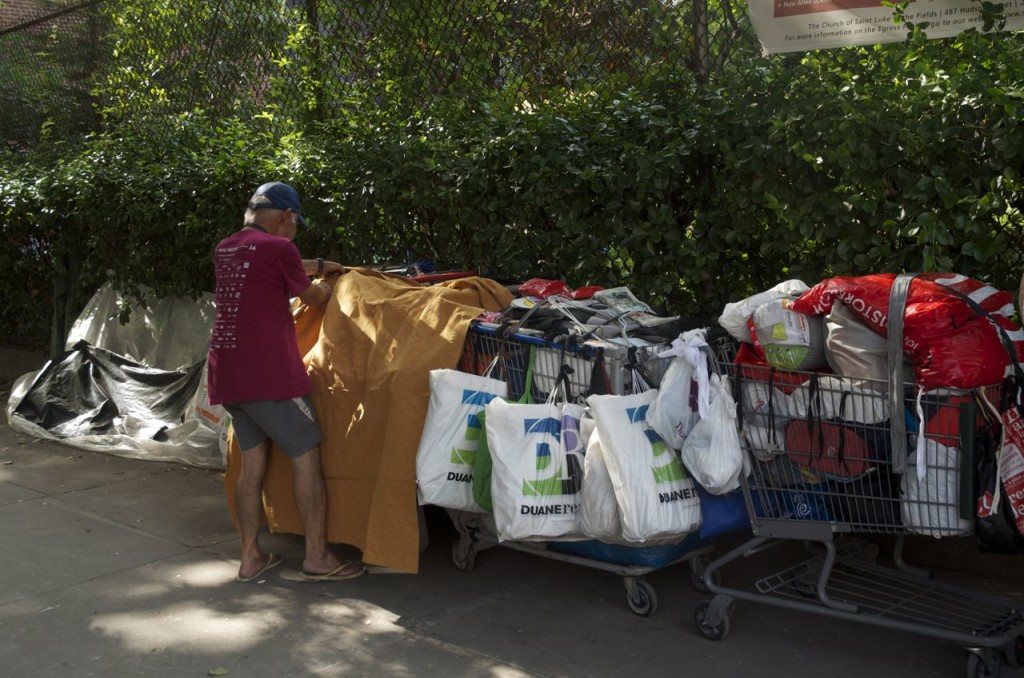 We watched this man tidying up a collection of grocery carts. These carts held  his earthly possessions; four carts tied together, overflowing with shoes, shirts, bedding and other household items. The shirts were neatly folded, the shoes stacked and lined up in pairs. Everything was arranged as though they were in dresser drawers or on a closet floor. On one side of the walkway he had rigged a sleeping area with a tarp tied to the fence for his roof. This was his home.

Thousands of  homeless people sleep in the streets of NYC every night. They sleep in the subway system and anywhere they feel is safe. There is no accurate measure of the homeless population that do not use the City’s shelters. Though in a recent city survey there is a significantly underestimated number of what is now labeled ‘unsheltered homeless New Yorkers’. 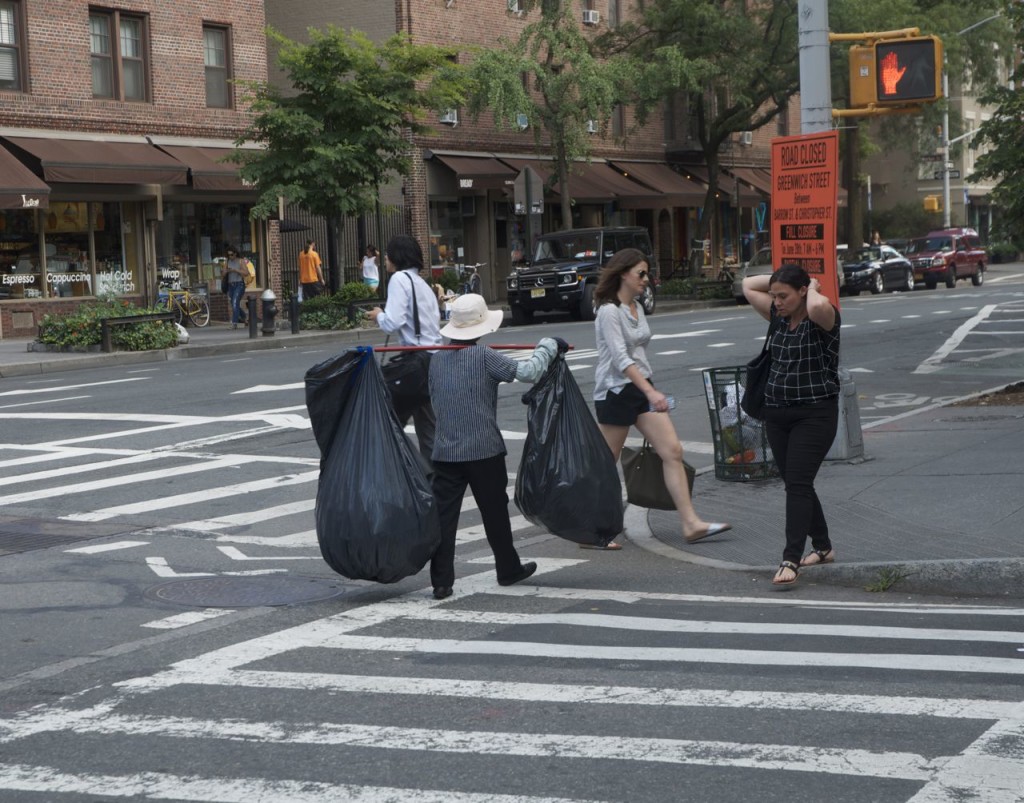 It wasn’t long before we saw a woman walking along the street with a pole slung over her shoulder carrying large plastic bags containing recycled bottles and cans. She checked the trash bins at each intersection, carefully sorting through the debris with her gloved hands. 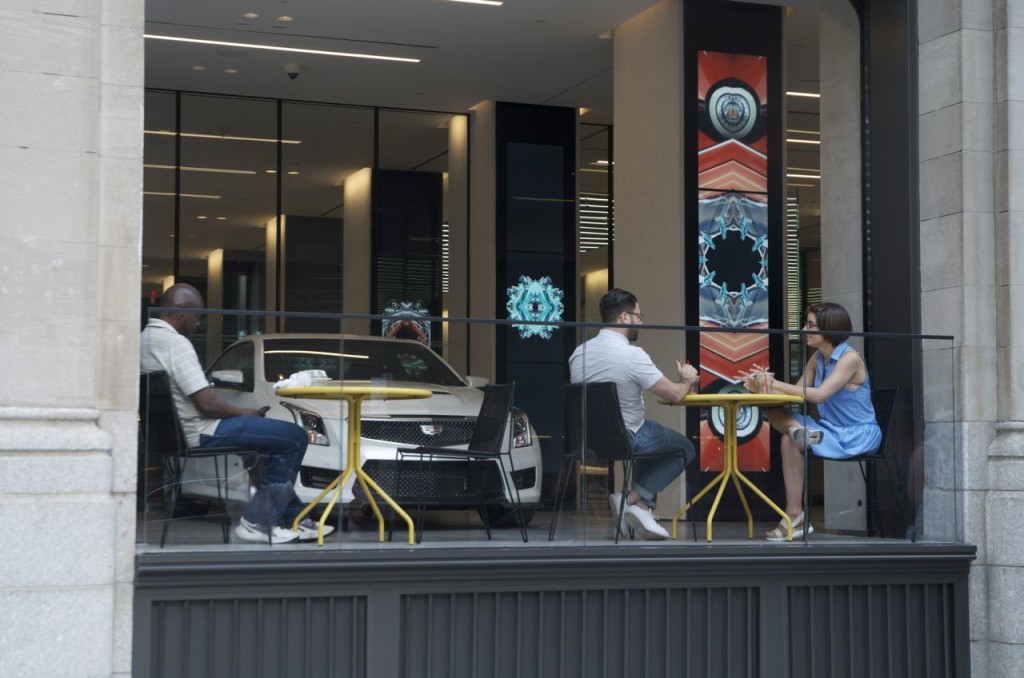 New York City, any large city really, is a kaleidoscopic slice of the world. A very profitable Cadillac dealership was just a short walk from where the tidy homeless man had set up his residence. The dealership, an immense glass showroom, has set up tables and chairs for the public to come in to cool off and perhaps drink their iced cappuccino. 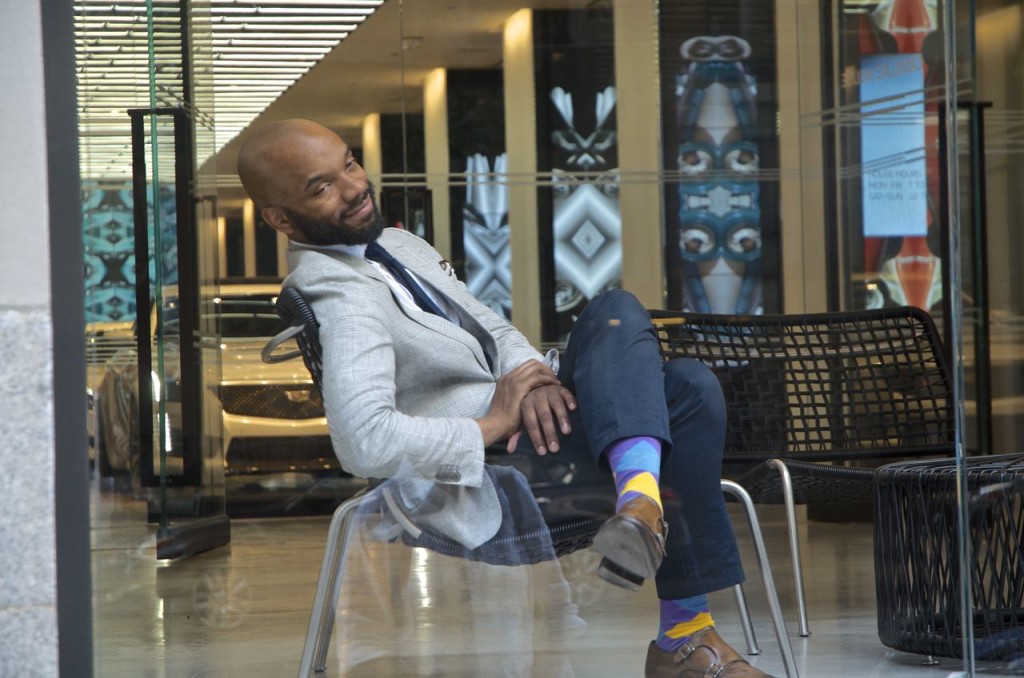 This guy with his wonderfully colored socks, probably one of the showroom’s sales staff, beaconed us to come, take a load off, enjoy the artwork and relax in the air-conditioning. We had no actual destination after leaving the Whitehorse Tavern, though we were more inclined to walk and take photos. 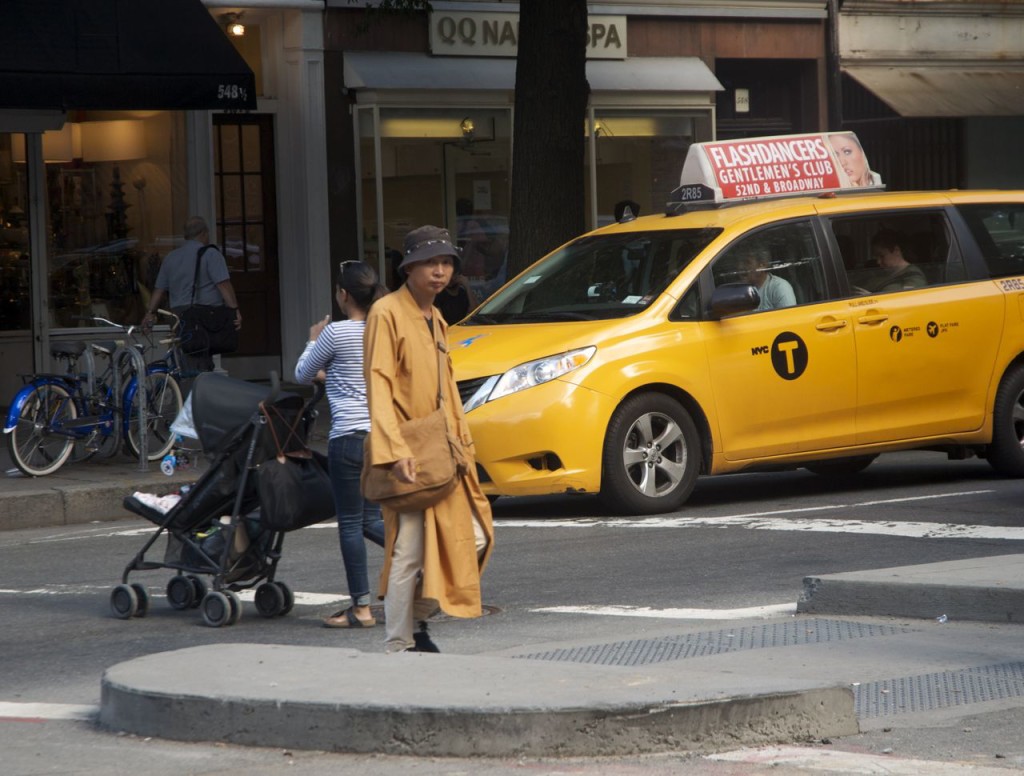 A man walking the streets in a saffron robe was soliciting funds. His counter part, a young woman, also dressed in a saffron colored robe, stood on the other side of the street waiting for him. She too stopped passersby asking for money. It wasn’t clear what group they belonged to, though when they met up, they looked quite conspiratorial as they huddled together behind a huge tree. 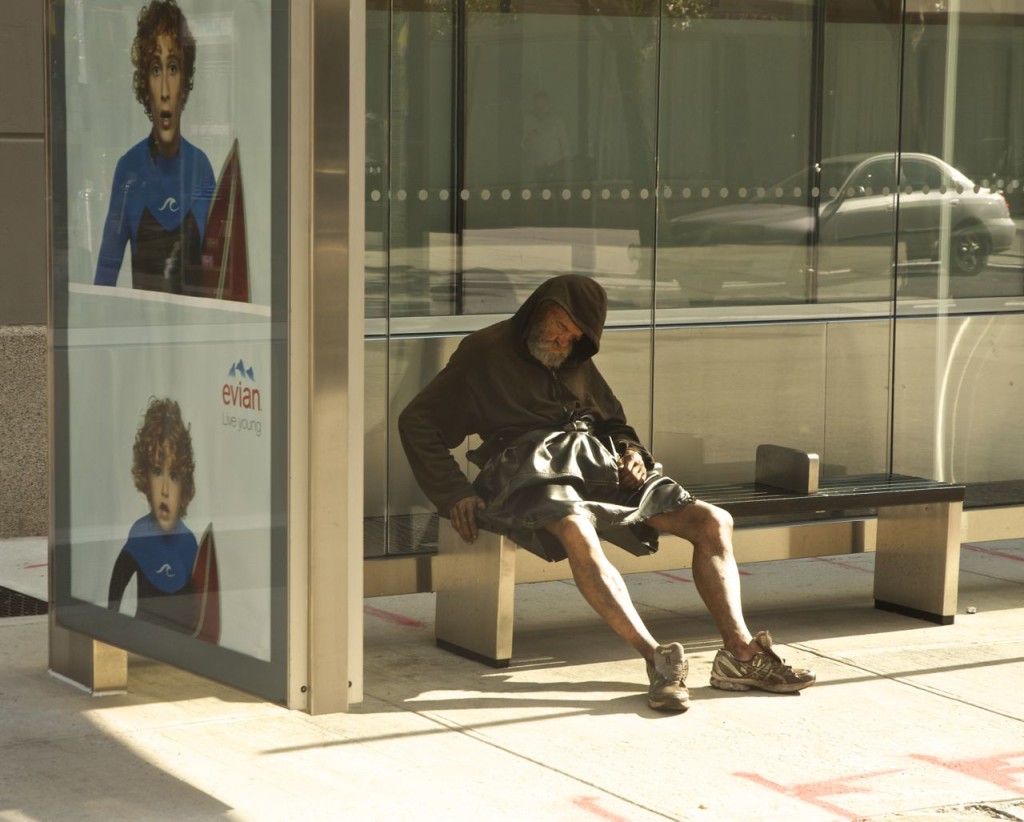 There are a great many unfortunate souls in this city. They take respite where they can. 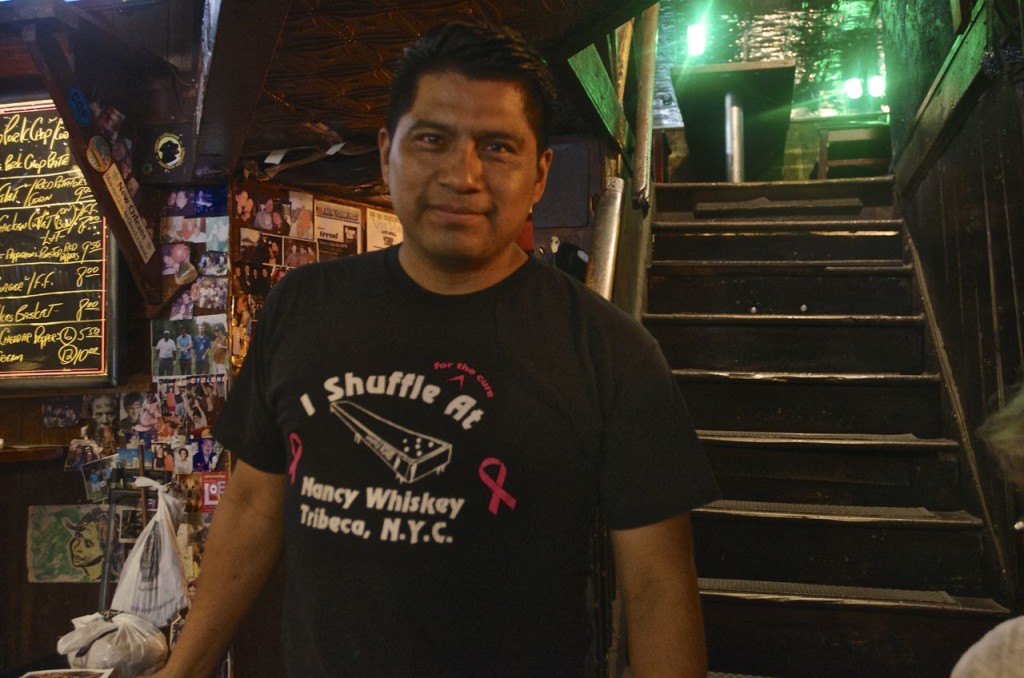 After some consideration about where to stop next, we decided to go to Nancy Whiskey. It’s a real dive bar that is advertised as crusty, greasy and cheap. Sounded like our kind of place. It’s also the only bar in NYC that has a shuffle board. This is probably the only unpretentious bar in all of Tribeca, an area just below the West Village. 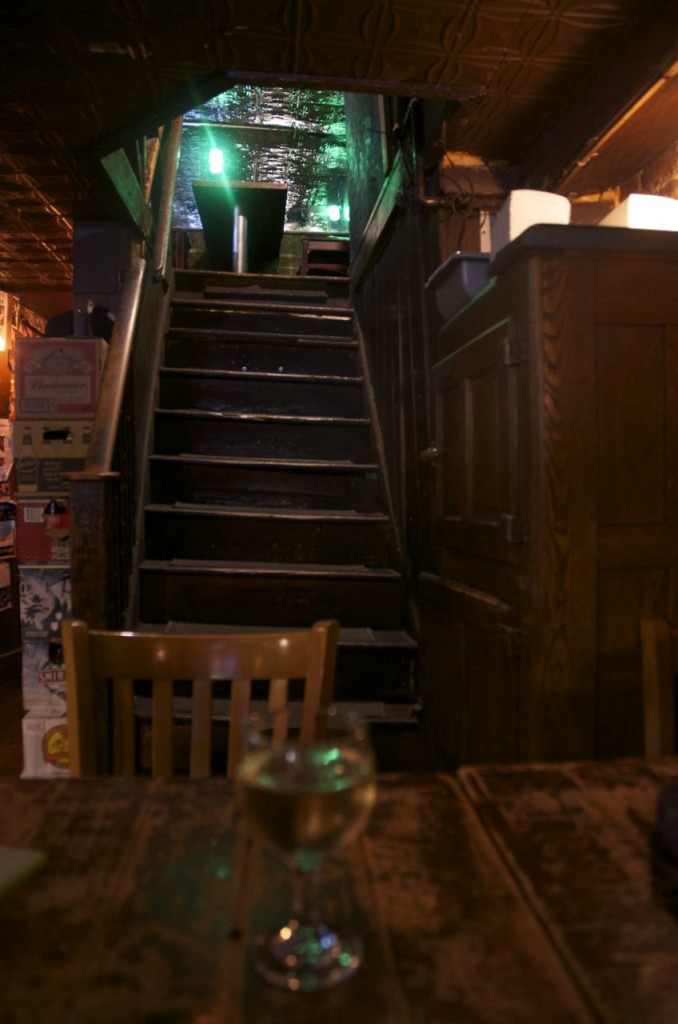 Nancy Whiskey does not get any play on the ‘haunted places list’, though, once you’ve stepped into this bar, how could you not feel like a ton of lost souls had passed through here. Why wouldn’t a few of them decide to stay and make this their home. 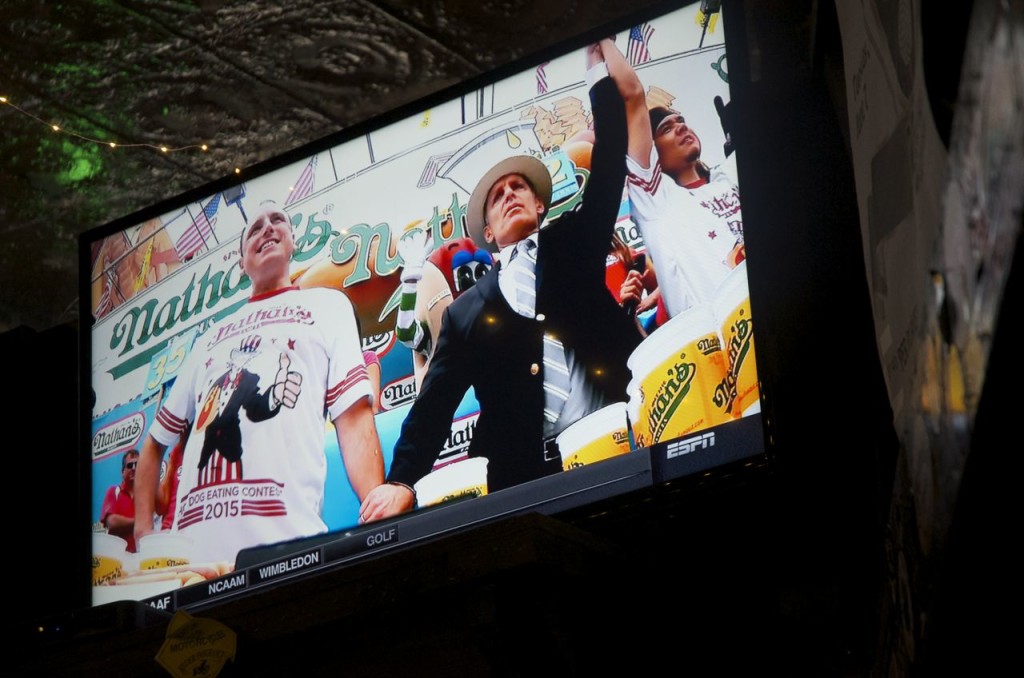 There were several televisions here, too. At one point I caught an advertisement for this year’s Nathan’s Hotdog Eating Contest. It’s something that goes on every July 4th in Coney Island. The program showed last year’s Champion, Matt Stonie. This year he’ll be going up against an army of eaters in the 2016 Nathan’s Famous Hotdog Competition. 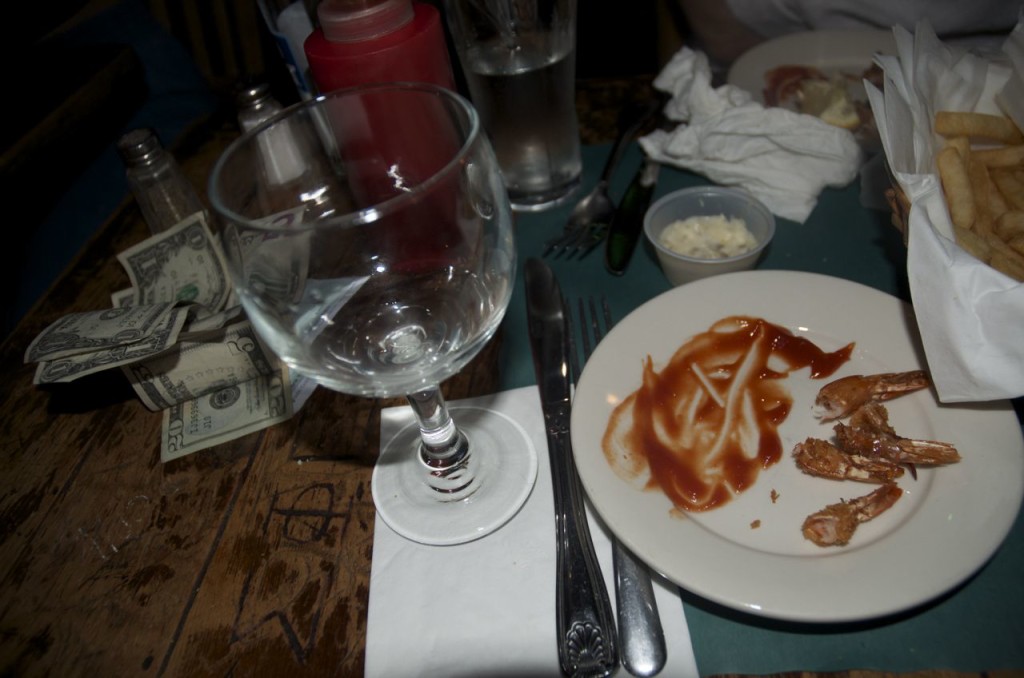 As I walked down through Glasgow City
With a heavy heavy heart and an achin’ pain
So many men all courtin’ Nancy
I’ll not leave that lass again. 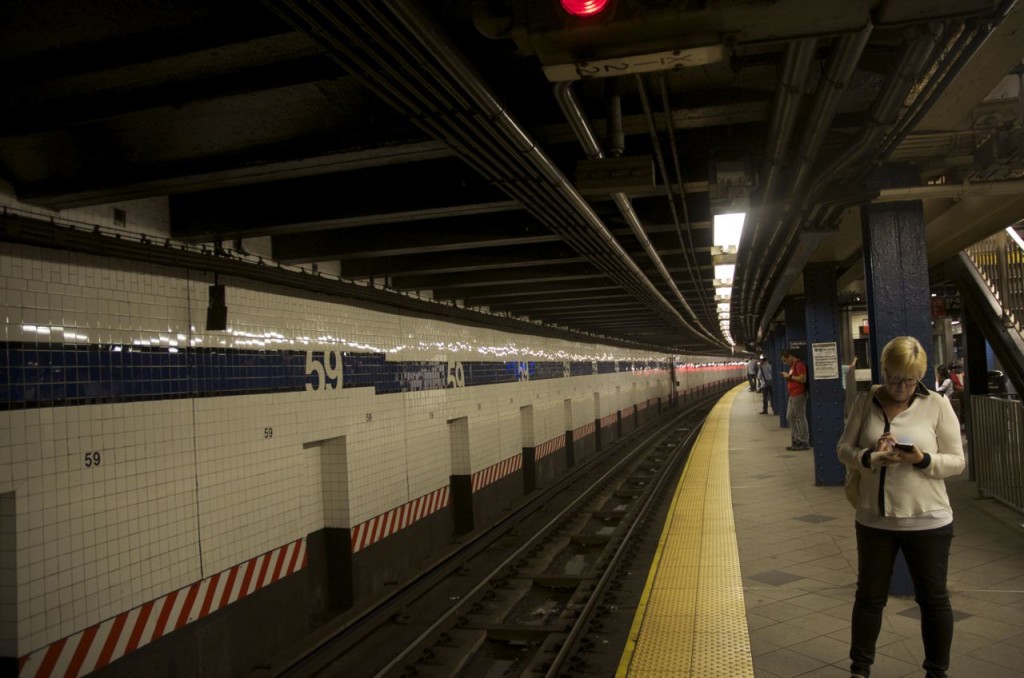 It had been a long day. A fun day. The rush hour was over. The few people waiting for the subway might have stayed late at work finishing up some last minute details. Or perhaps they were at some dive bar, drinking glasses whiskey, and were now phoning home, saying things like; “I had too much work to get away any sooner.” Maybe they blamed the crowed and erratic subway traffic. Or perhaps they just said, “I’ll be home soon.”