Last weekend we traveled to Brooklyn’s Pier 5 to watch our grandson play soccer. It was a wonderfully bright, late Saturday afternoon with a bite in the air that lets you know summer is over and that fall is here. There was still some warmth from the sun though and the brilliant sunlight took the chill out of the air.

Pier 5 is directly across from the lower end of Manhattan and is one of the old piers that has been refurbished and turned into a recreational area. There are other piers along the Brooklyn waterfront and this one is set up specifically for soccer, lacrosse, rugby, flag football and ultimate Frisbee. 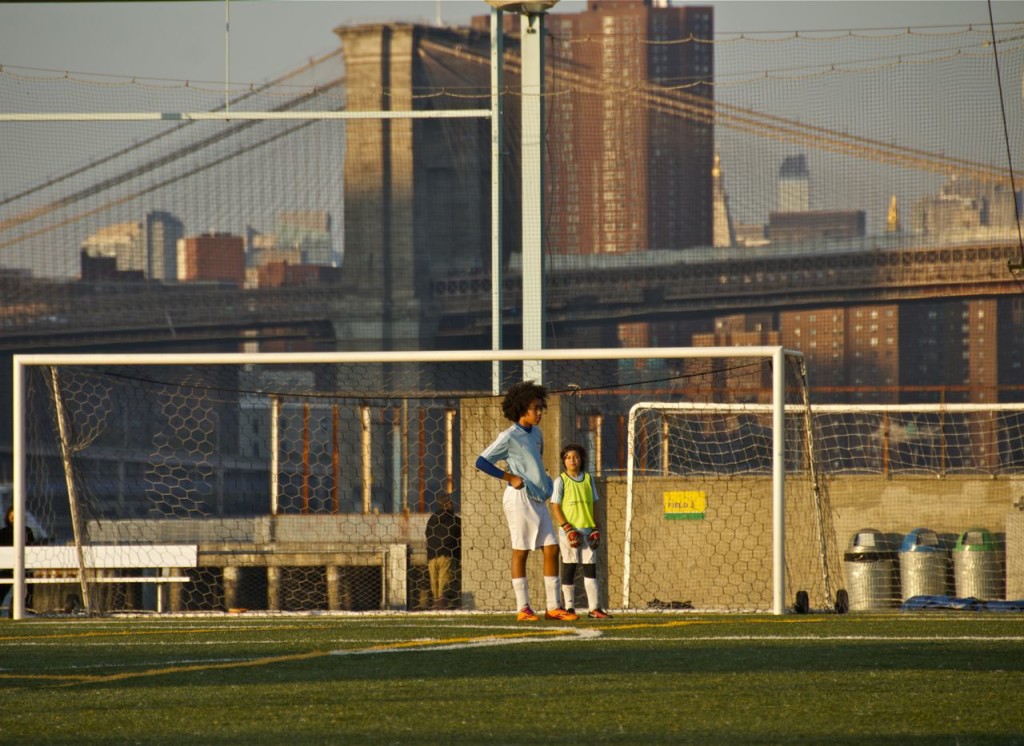 There is a fantastic view of Lower Manhattan all along the Brooklyn waterfront though I doubt my grandson’s team has much interest in the scenery as they get ready for the kickoff. 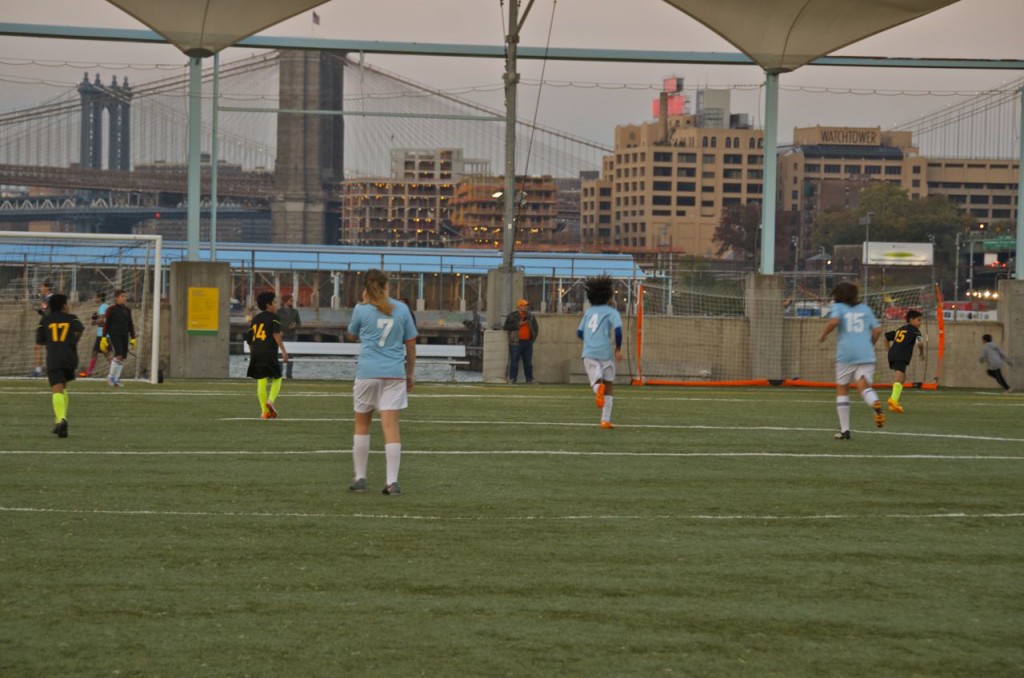 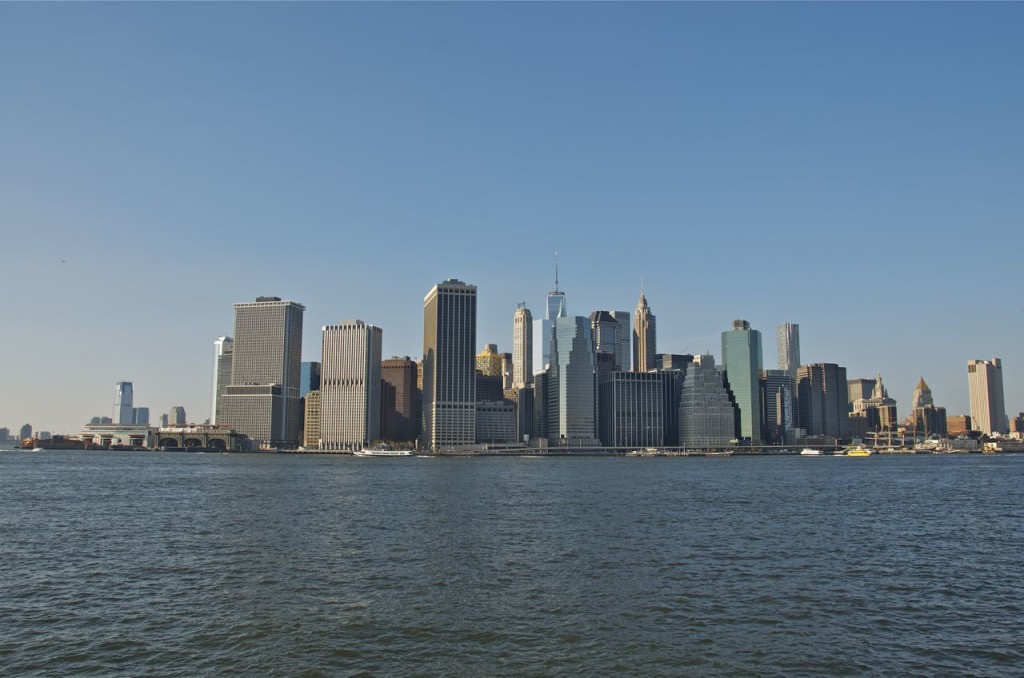 The waterfront areas of Brooklyn have been enjoying this scene forever! The growth, the destruction, the horror of 9-11, have all been privileged views of this borough’s residents. 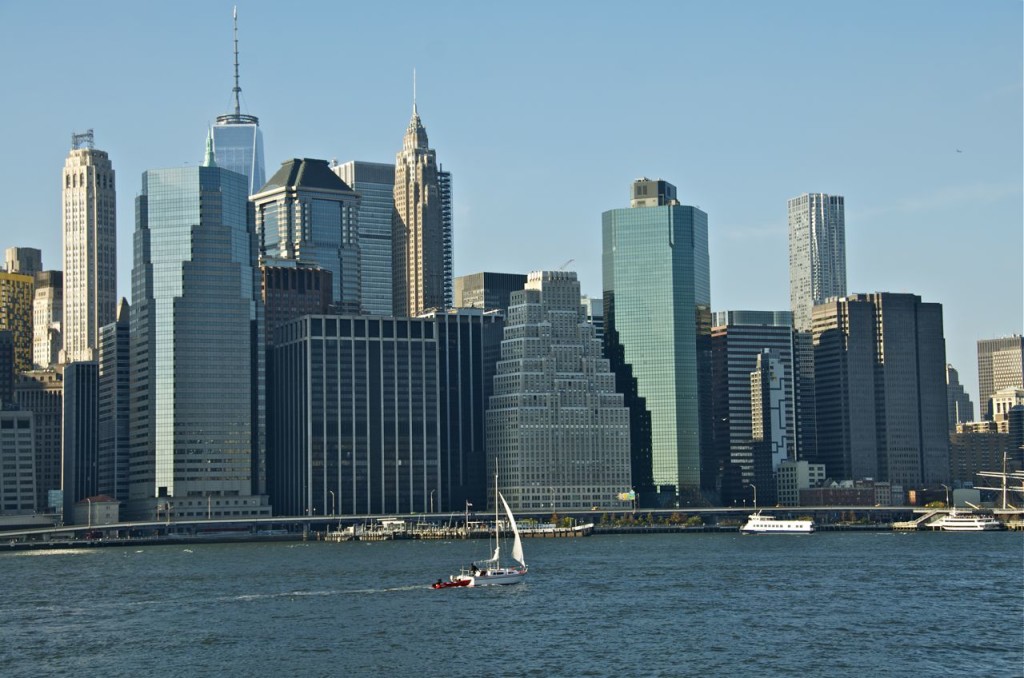 This body of water is not the Hudson River but the East River. It is not really a river but a salt water tidal channel that separates the boroughs of Brooklyn, Queens, The Bronx and Long Island from the island of Manhattan. The East River connects with the Long Island Sound and was once known as Sound River. 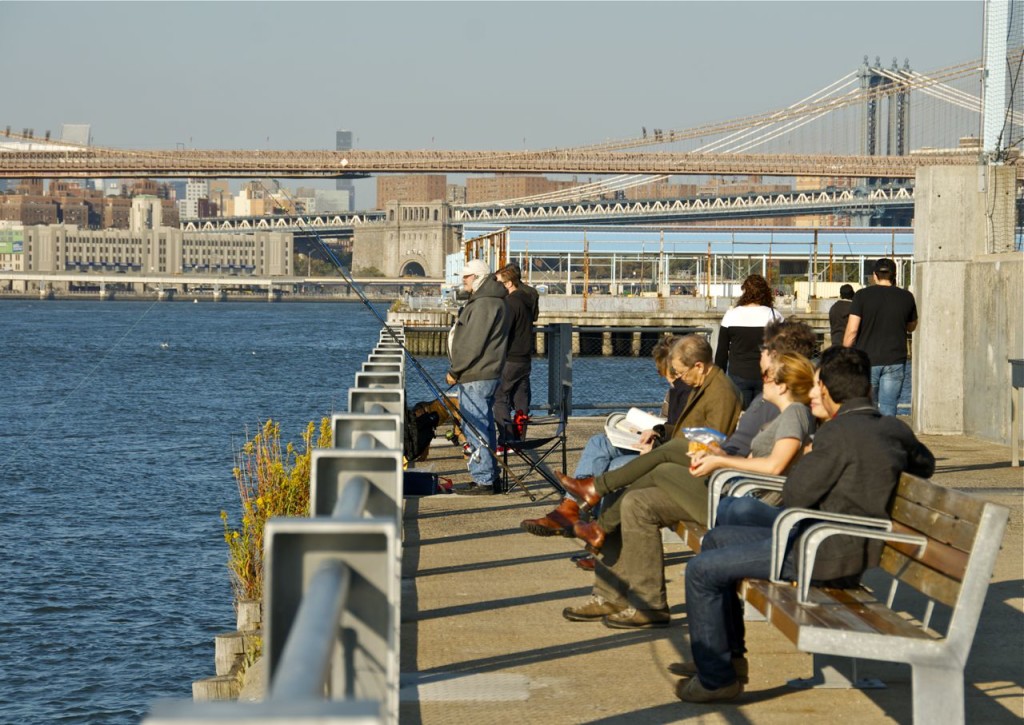 Pier 5 has a 30 foot wide walkway that traverses the ball fields. Benches are placed all along the promenade and people come to read, have lunch, watch the view and kiss. 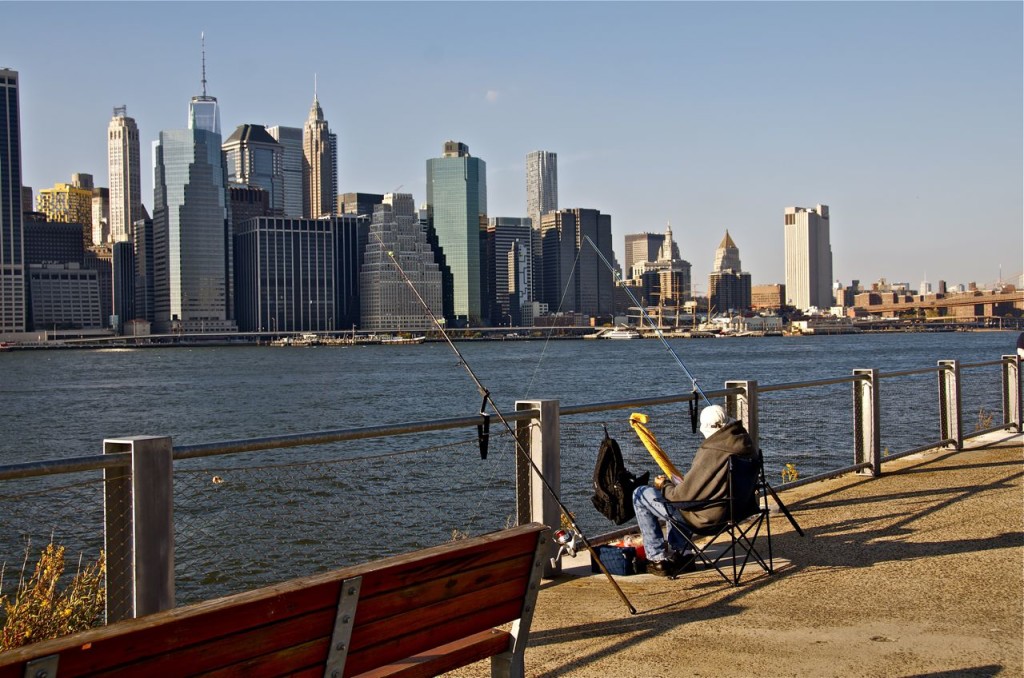 Some people spend the day fishing from this pier. Because of pollution it is dangerous to swim in these waters. But in 2010 the NYC Dept. of Environmental Protection said the river now had a Classification #1 which meant that it was safe only for secondary activity, such as, fishing and boating.

While I walked along the promenade I saw someone catch a fish. It looked like a bass to me, a small one. I understand there is a sign somewhere along the walkway that says it’s safe to eat the fish caught from this pier. Though there is a warning on the sign that suggests pregnant women, or women intending to get pregnant and children under the 15 should not eat fish caught in these waters!

There is a fish cleaning table on the pier and I watched as the fisherman, a working class looking guy in his 50’s, cut off the head of his freshly caught fish and began to scrape off the scales. It looked like he was getting that fish ready for his dinner that night. 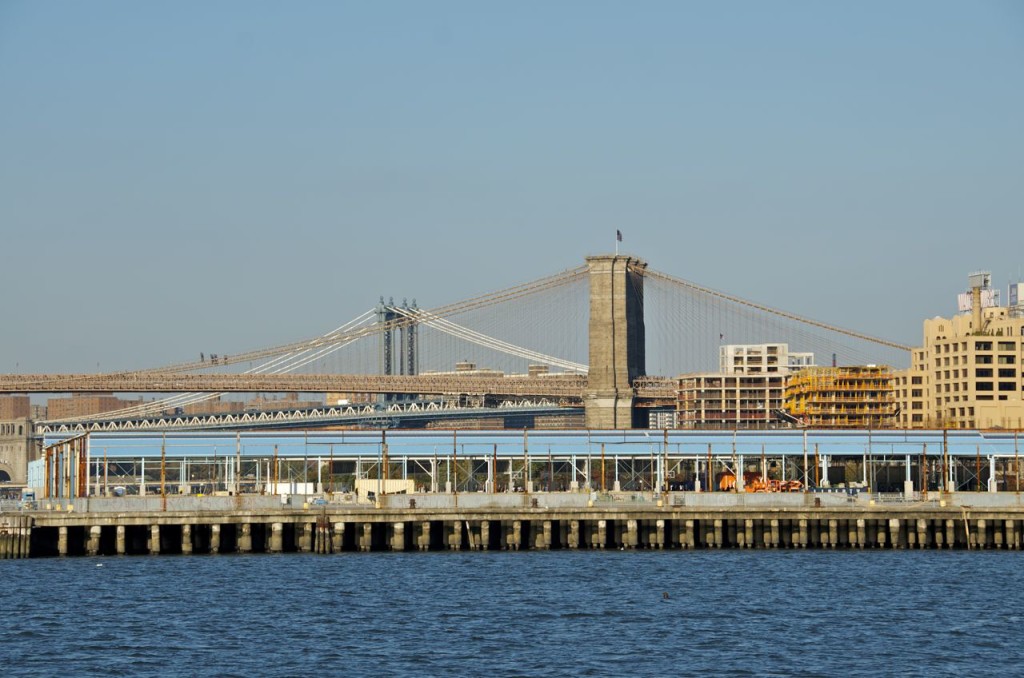 There is another area near Pier 5 being fixed up. Someone said this one was going to be a skating rink. What fun that will be! From here you can see the Brooklyn Bridge and beyond that, the Manhattan Bridge. 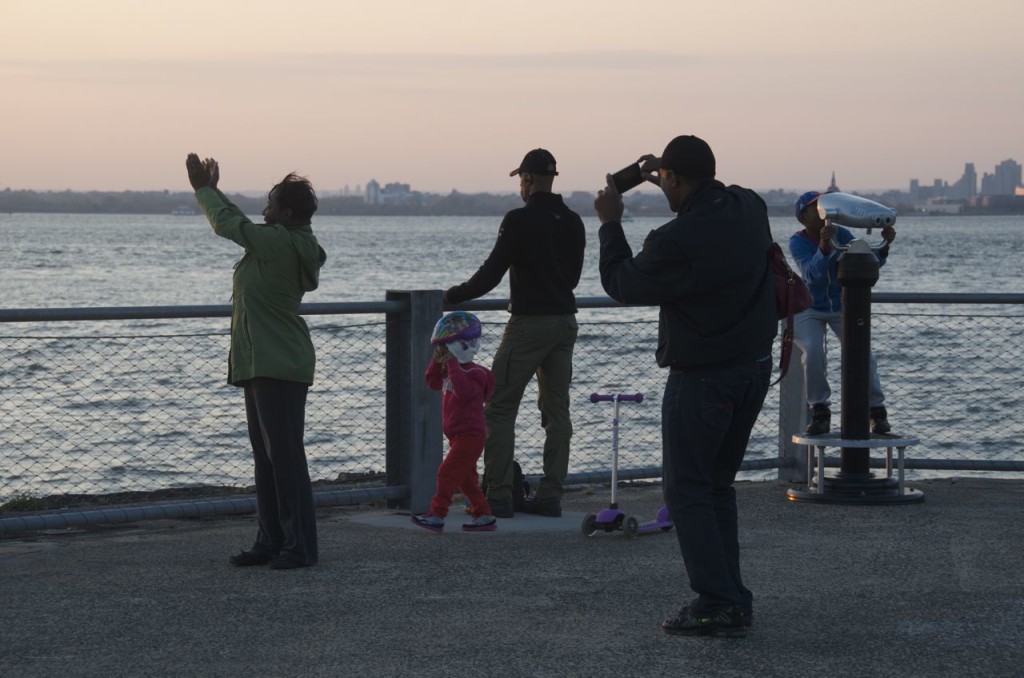 The sun began to set before my grandson’s game was over and I took another walk around the promenade. I watched this family, the kids doing their thing while the husband was attempting to get a photo of his wife holding the setting sun in her hands. They were laughing and he was giving her instructions how to move while their little daughter was not having much fun waiting, began to cry. 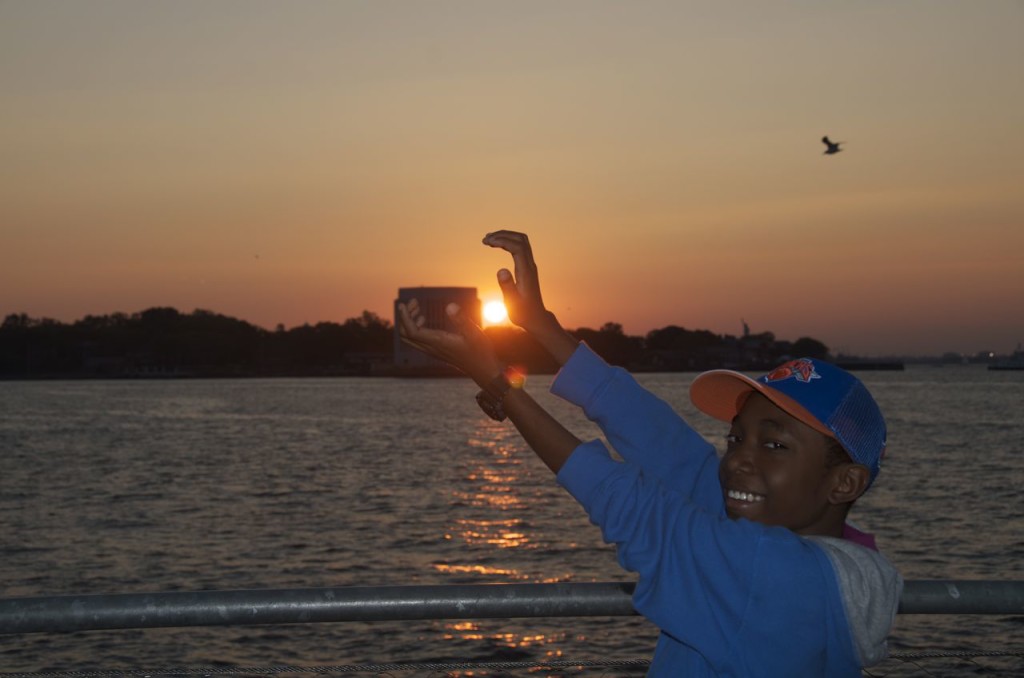 When the parents were finished and while the father looked through his digital treasures, their son wanted a picture of him holding the setting sun,too, and I volunteered. 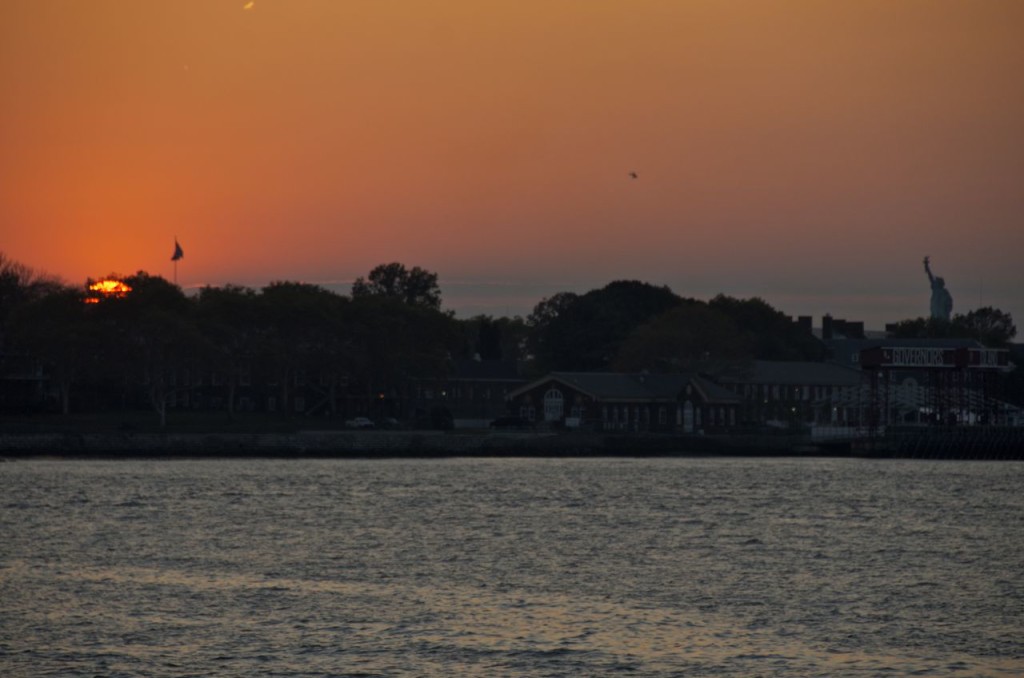 And just as the sun sinks behind the other side of Governor’s Island it really looked as though Lady Liberty was waving goodbye.

10 comments for “PLAYING SOCCER ON PIER 5”