In the early afternoon of August 24th 79 AD an unusual cloud hung over Mt. Vesuvius. We know this because, Pliny The Younger, an 18 year old and one of a handful of people who survived the devastating eruption of this infamous volcano, later wrote about his experience. 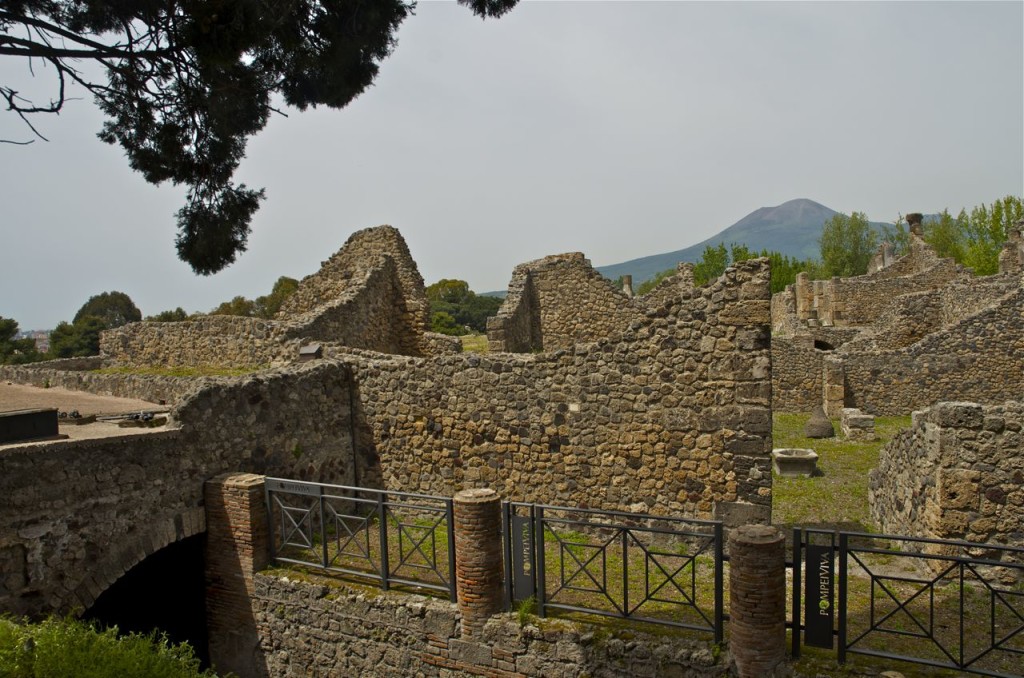 Pliny The Younger: “Let us leave the road while we can still see, ‘I said,’ or we shall be knocked down and trampled underfoot in the dark by the crowd behind. ‘We had scarcely sat down to rest when darkness fell, not the dark of a moonless or cloudy night, but as if the lamp had been put out in a closed room.” 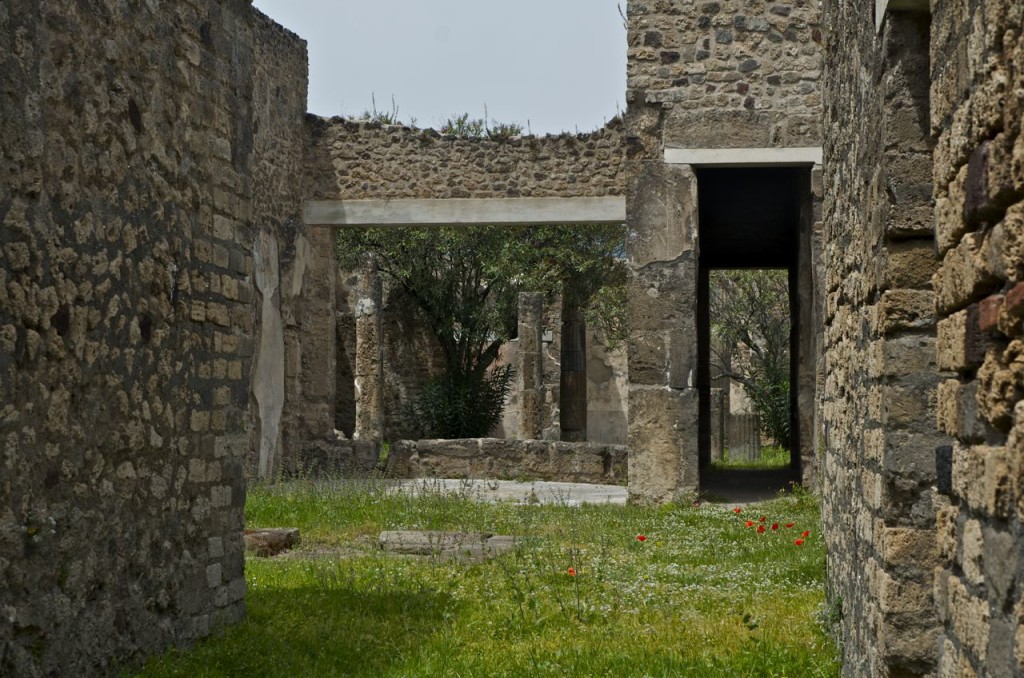 Pompeii had always seemed like a mythical place to me. Such drama. Such devastation. It seemed a triumph of nature that rendered even the strongest man or woman helpless. This eruption obliterated three vital Roman communities. One city, Pompeii, boasted of a population between 10,000 and 20,000 inhabitants. These cities would remain buried, invisible to the living world, through the rise of Byzantium, through the Middle Ages and even the Renaissance, not to be rediscovered until the mid 1700’s. 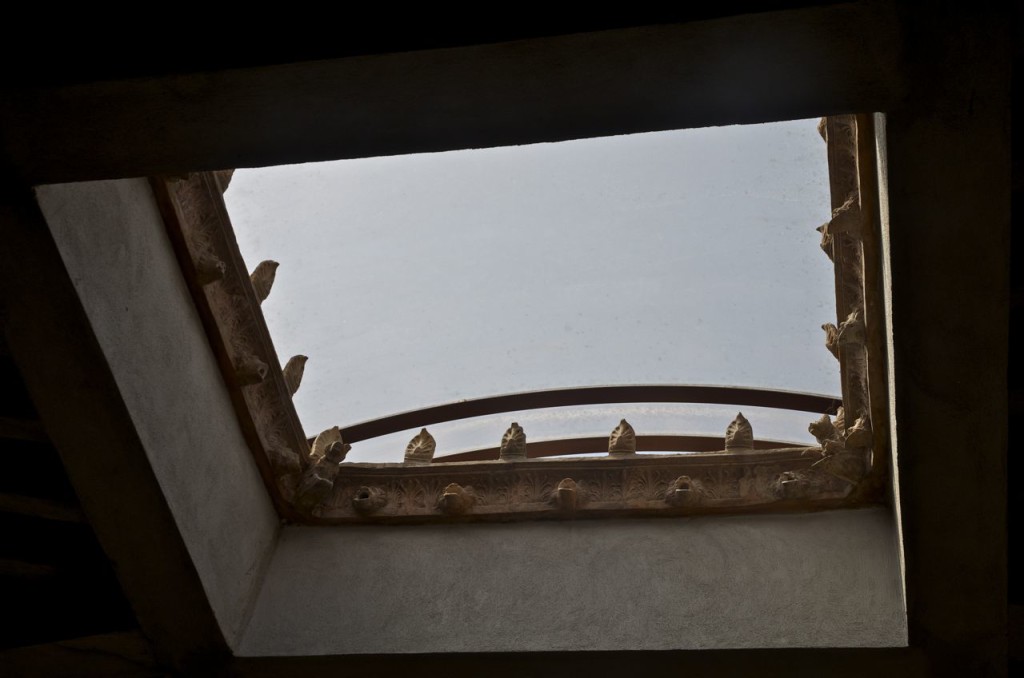 It was Amalia Saxony, the new bride of King Charles of Naples, who in 1738 became interested in the classical sculptures she saw in the gardens of the Royal Palace in Naples. Thirty years earlier a French Prince digging in the grounds of his villa on Mt. Vesuvius had unearthed the sculptures that so intrigued the new queen. 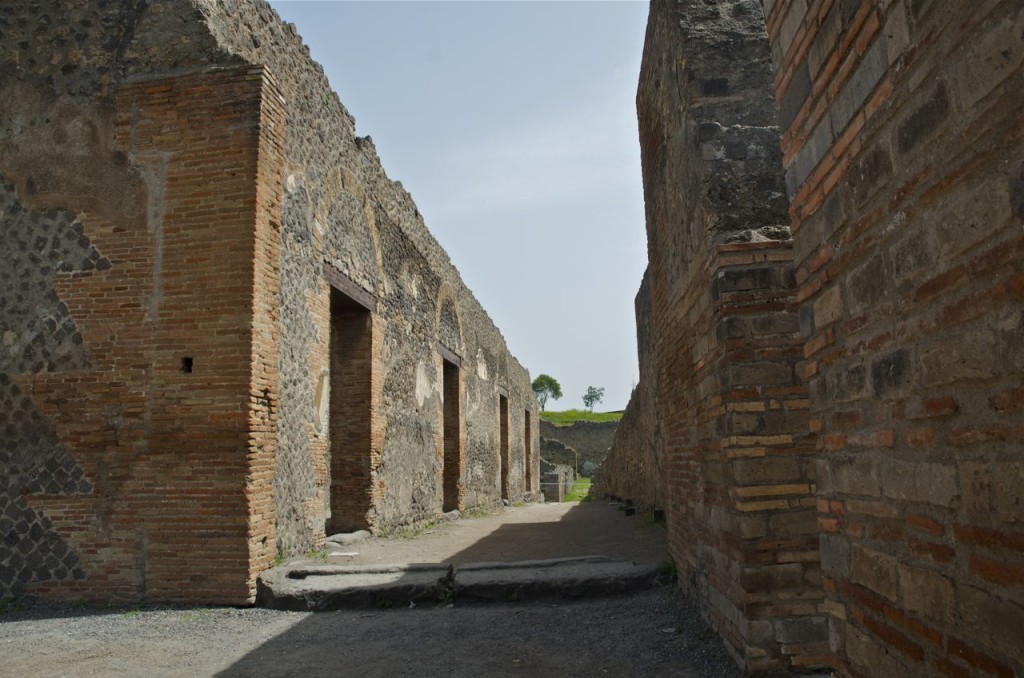 In order to please his wife, King Charles assembled a team of laborers to further explore the area. They dug for months, blasting and tunneling through hard lava, eventually unearthing painted columns, sculptures of Roman figures draped in togas, a bronze torso of a horse and a flight of stairs. Near the stairs they uncovered an inscription “Theatrum Herculanense”. They had unearthed the Roman-era town Herculaneum, a resort community also in the path of Mt. Vesuvius and a city within 20 miles of Pompeii. (I will write a blog post about Herculaneum at a later date.) 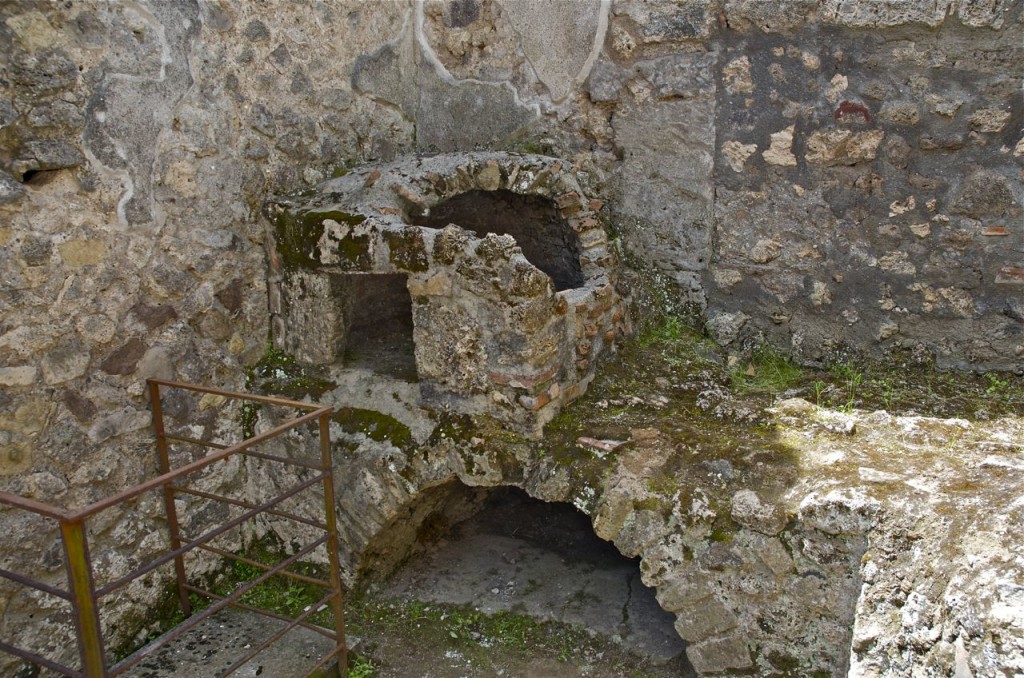 Ten years after the discovery of Herculaneum, the excavation of Pompeii was begun. Herculaneum swallowed in a flow of molten lava that when cooled became hard rock made excavating the city arduous and labor intensive. Pompeii, on the other hand, was buried in softer deposits of pumice and ash which made it easier to uncover Pompeii’s streets, villas, mosaics and remains of the dead. 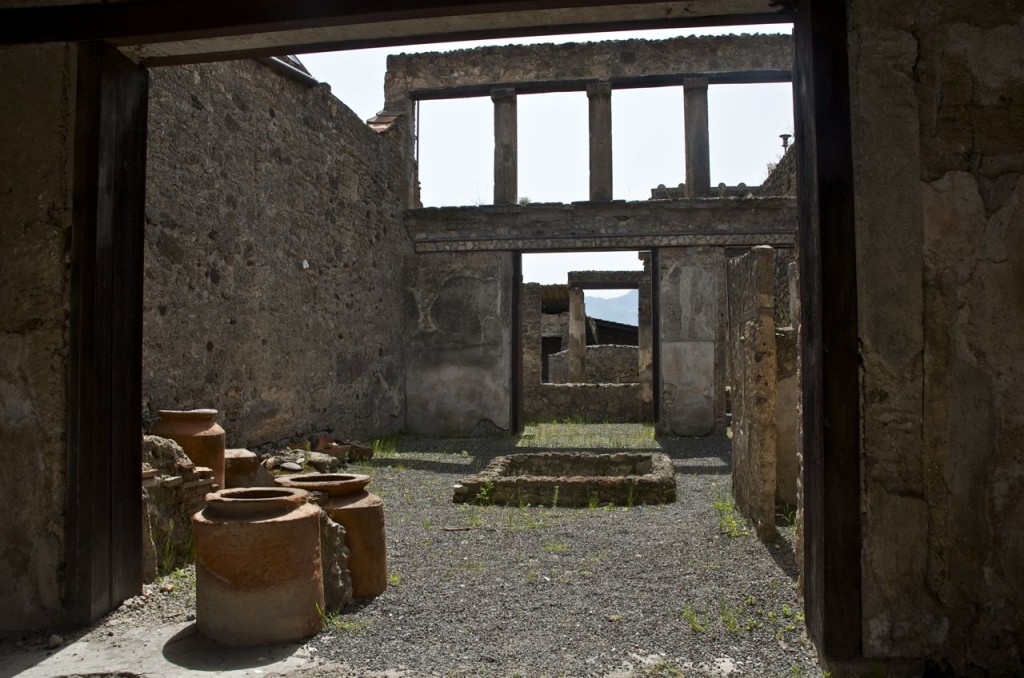 Pompeii was a city that covered a 160 acre area. It had bakeries with large ovens and there is still evidence of cart wheels that cut tracks on the stone road surface.

An Amphitheater, a major Roman entertainment venue, was unearthed. Though there was a wide range of experiences for the attendees, gladiators were the favorite. The amphitheater in Pompeii only seated 20,000, a theater considered small by Roman standards. There were large passage ways for the gladiators to make their grand entrances. But, on one side of the theater there is a narrow passage call Porta Libitinensis, thought to be where the dead were most likely dragged out. 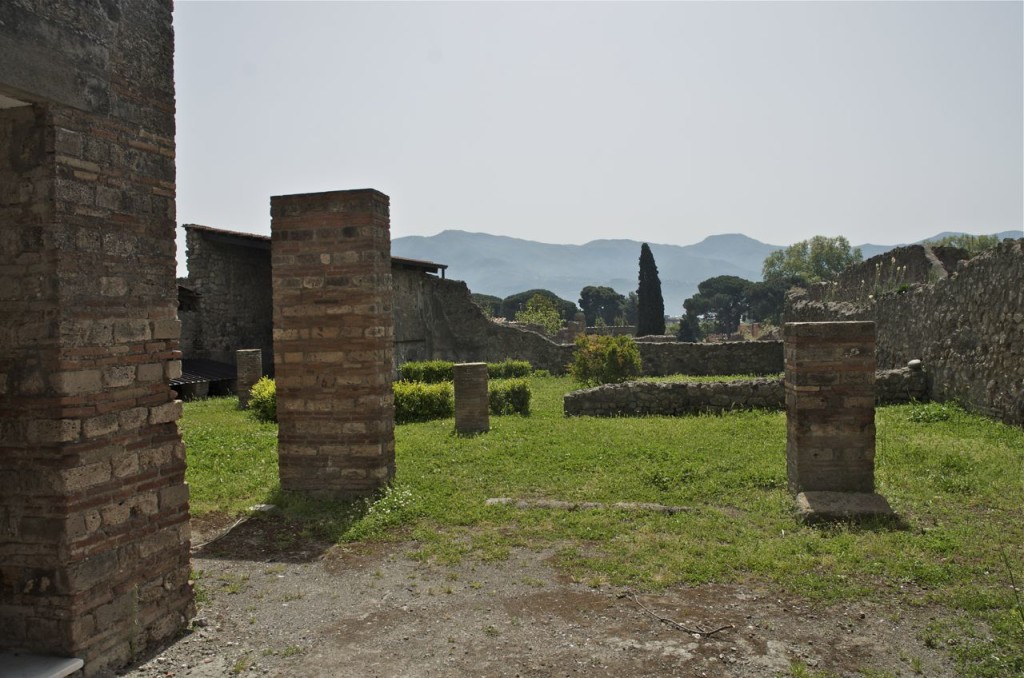 Pliny The Younger: “You could hear the shrieks of women, the wailing of infants, and the shouting of men; some were calling their parents, others their children or their wives, trying to recognize them by their voices. People bewailed their own fate or that of their relatives, and there were some who prayed for death in their terror of dying. Many besought the aid of the gods, but still more imagined there were no gods left, and that the universe was plunged into eternal darkness for evermore.” 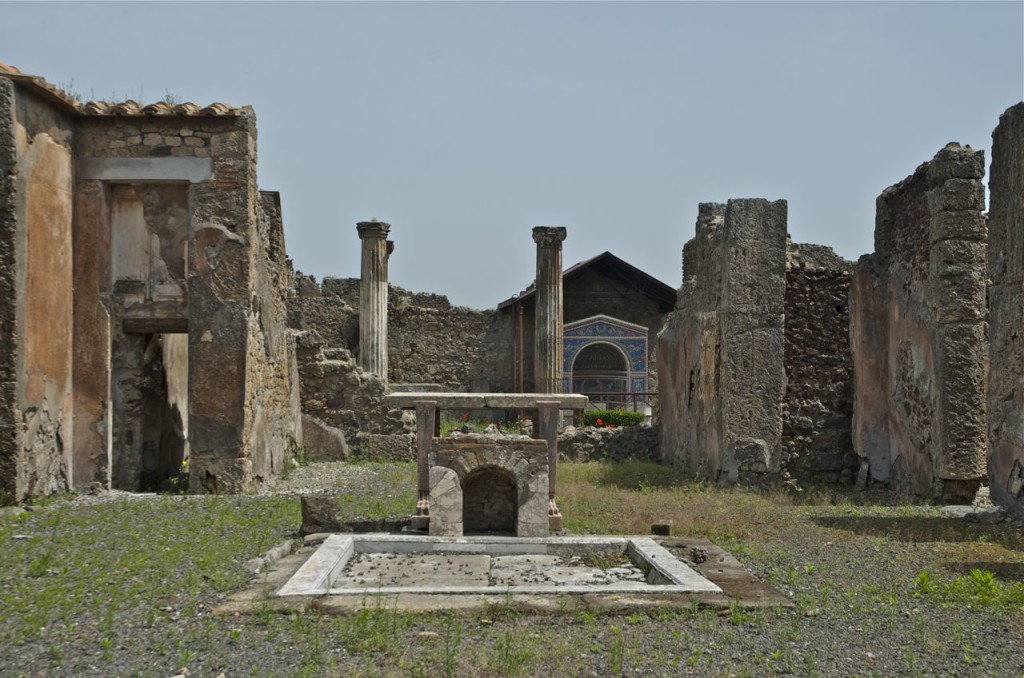 The external facade of the houses were plain. It was the interiors where the homes were lavishly decorated and embellished with mosaics, frescos, fountains and altars. 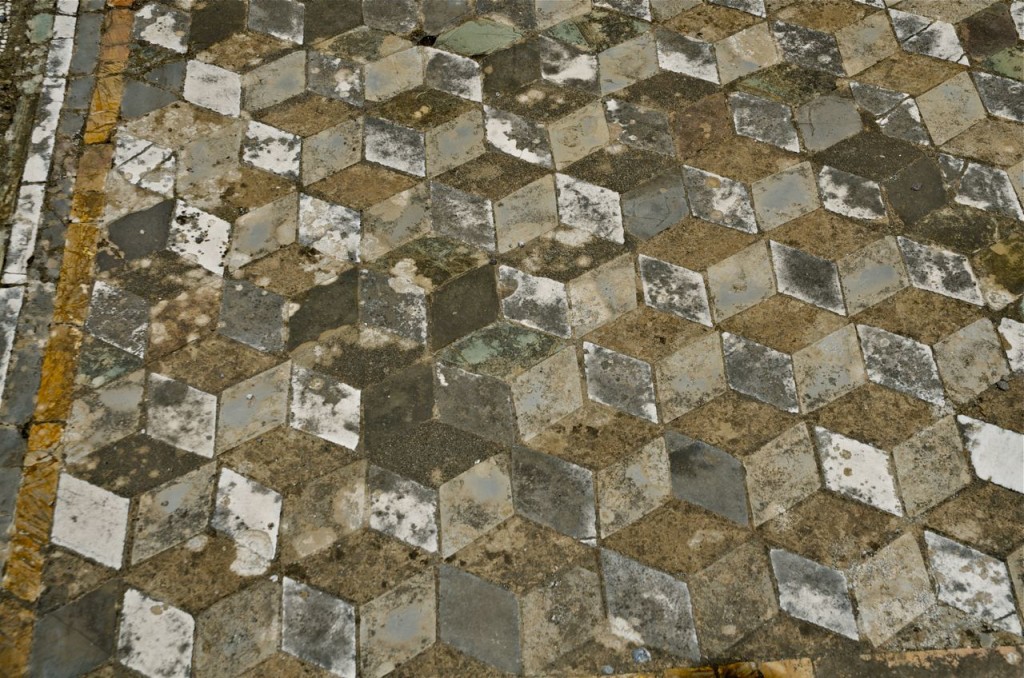 It was quite common 2,000 years ago to decorate the interior floors with mosaics. These are marble floor tiles constructed in a tumbling block pattern. Today quilters use this pattern. I wonder how many contemporary quilters realize that this pattern dates back to before the 1st Century? 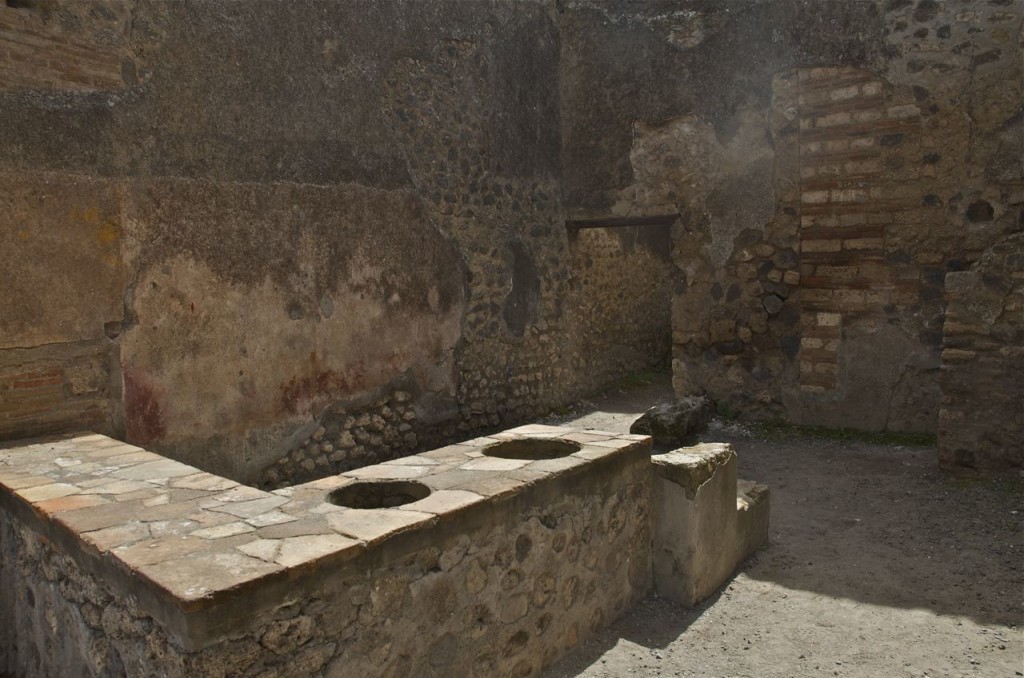 As we walked the streets of Pompeii we saw the remains of ‘fast food venders’ called thermopoliums, or in a literal translation, a ‘place where hot things are sold’. Quick and easy fried food was most likely the popular item sold in these fast food eateries. One recipe I found dating back to the early Roman times was a bread soaked in milk and then deep fried. 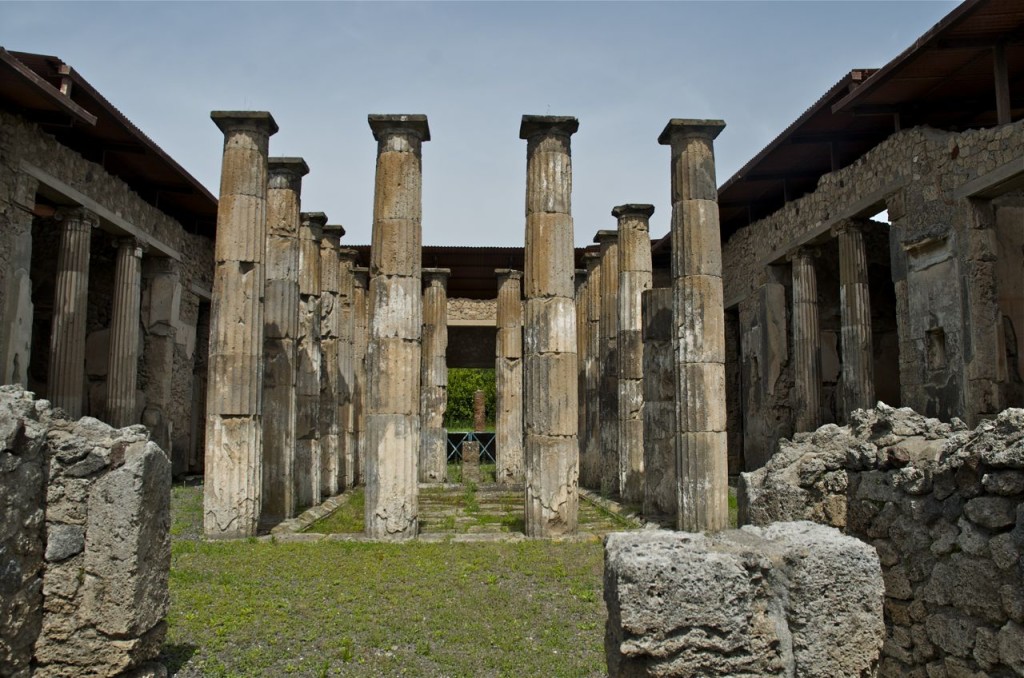 Life in the 1st Century AD revolved around an uncovered inner courtyard, with rows of columns and maybe a garden with a fountain. This was the private section of a home usually reserved for close friends and family. 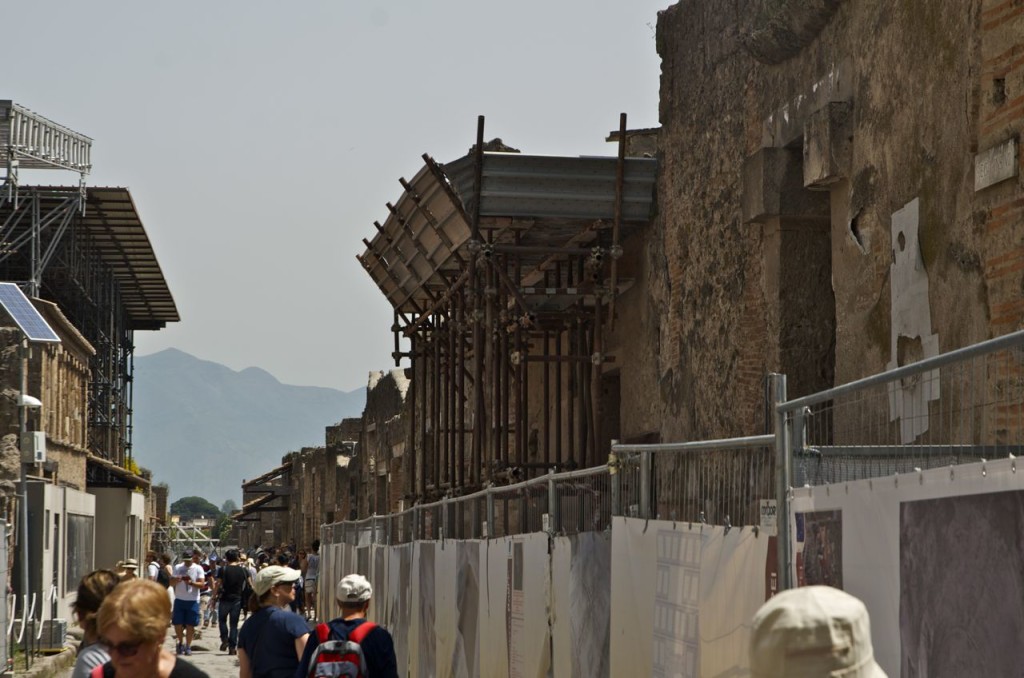 There are sections of Pompeii closed off to the public while restoration is in progress.

Since 2010 there has been some devastating losses, buildings collapsing, moss and grass, weeds and shrubs sprouting from cracks in marble pedestals. Also, there has been mismanagement and squandering of funds, as well as large scale fraud. 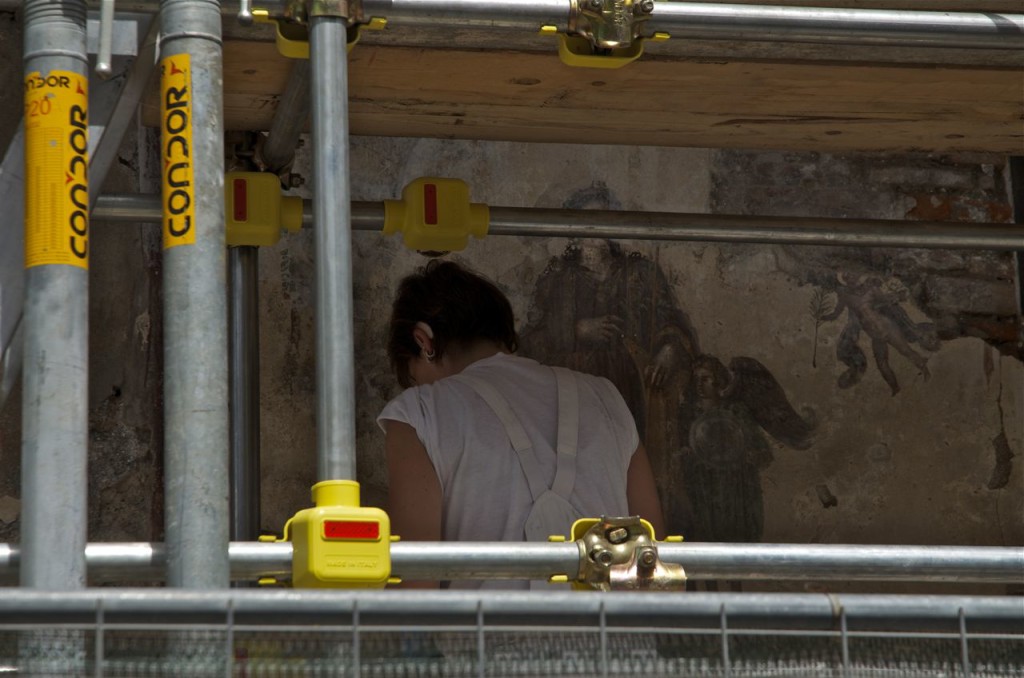 Inappropriate restoration methods and lack of qualified staff, as well as inefficient drainage systems have gradually degraded the structural condition of some of the buildings causing them to fall deeper into disrepair.

A new watchdog system has been put in place in Pompeii to insure that even more damage does not occur to this extremely fragile environment. 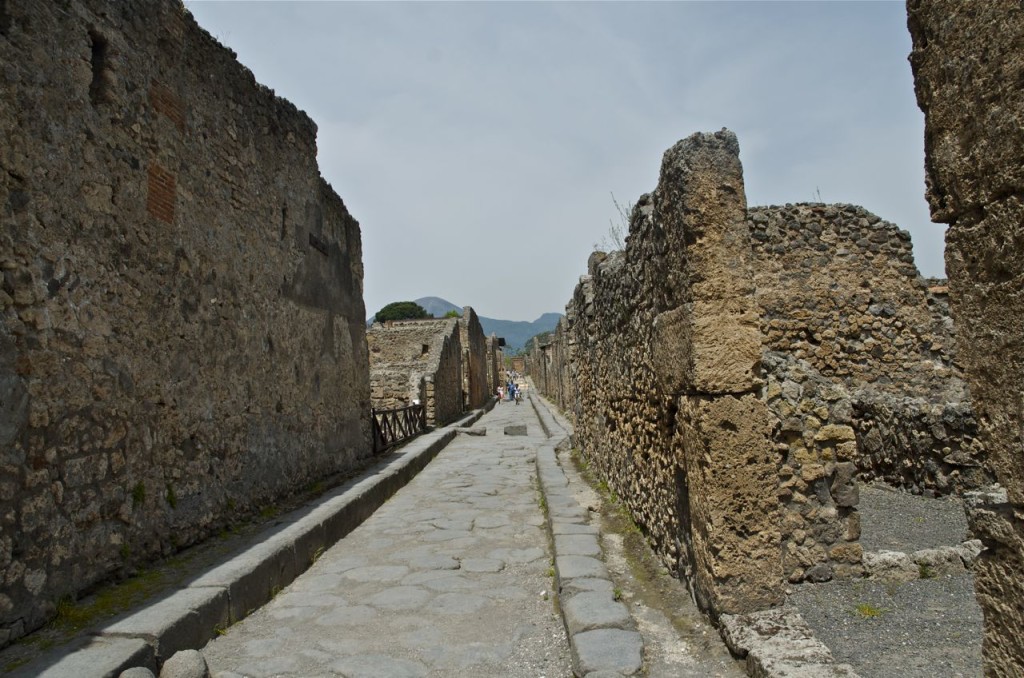 Pompeii was laid out in a grid pattern, with two main intersecting streets. The wealthiest took up whole blocks for themselves. Those less fortunate built a house then rented out the front portion of the house as a shop. 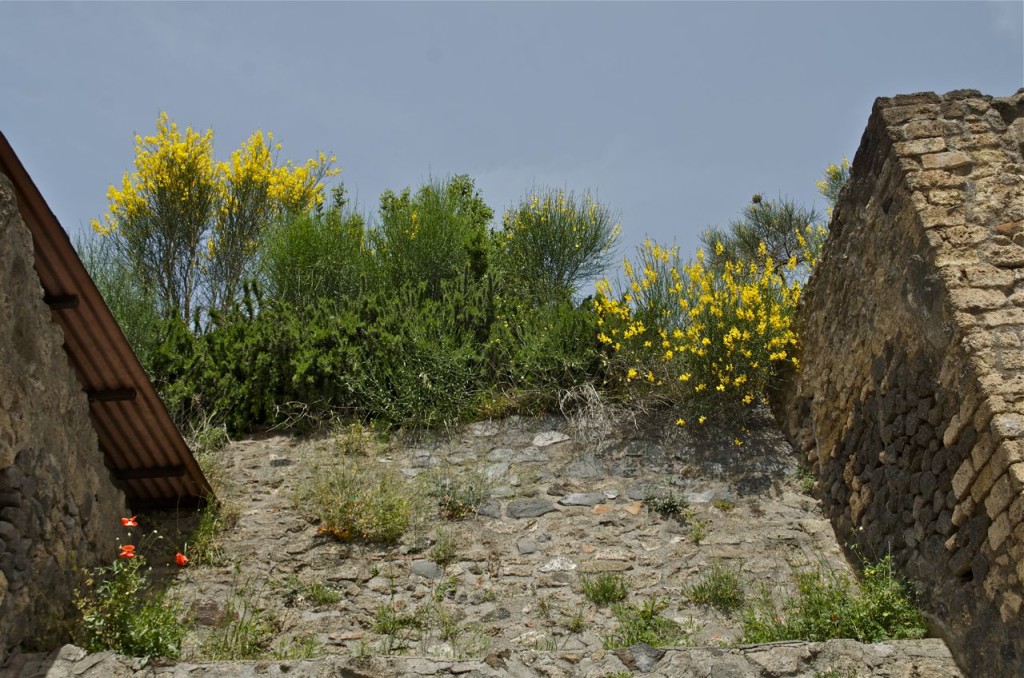 Within twelve hours of the initial eruption of Mt. Vesuvius, the threatening cloud, a column of soot and ash collapsed, a turbulent, superheated pyroclastic surge rolled down the slope of the mountain, instantly killing everyone in its path. 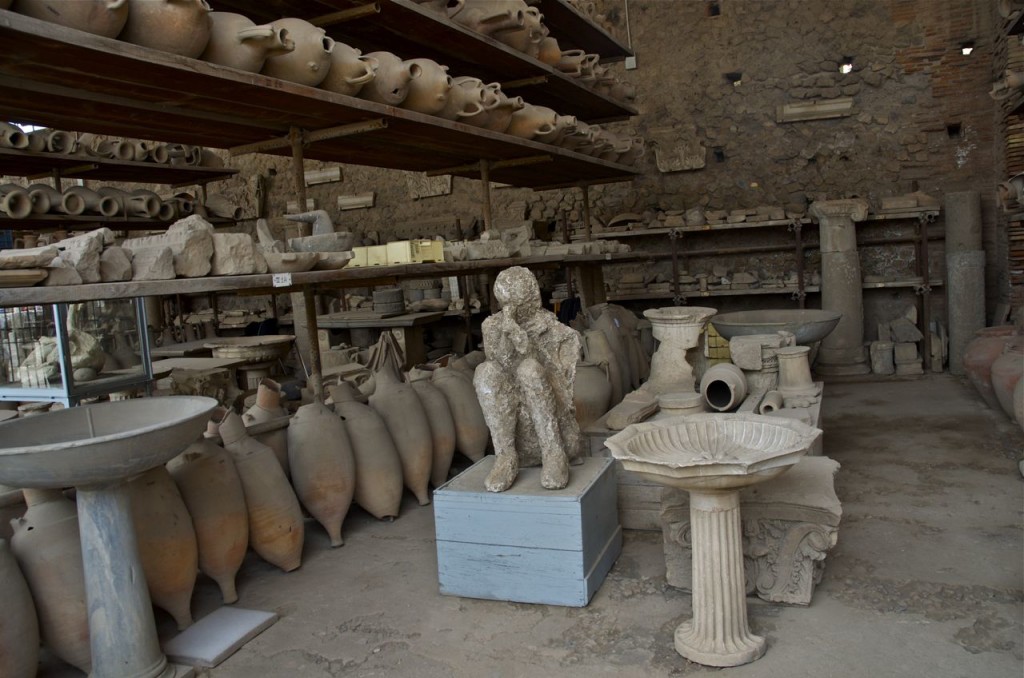 In the 1860’s Giuseppe Fiorelli, a pioneering Italian archaeologist at Pompeii, poured liquid plaster into the cavity of the solidified ash created by the decomposed flesh, creating perfect casts of the Pompeii victims at the moment of their deaths. 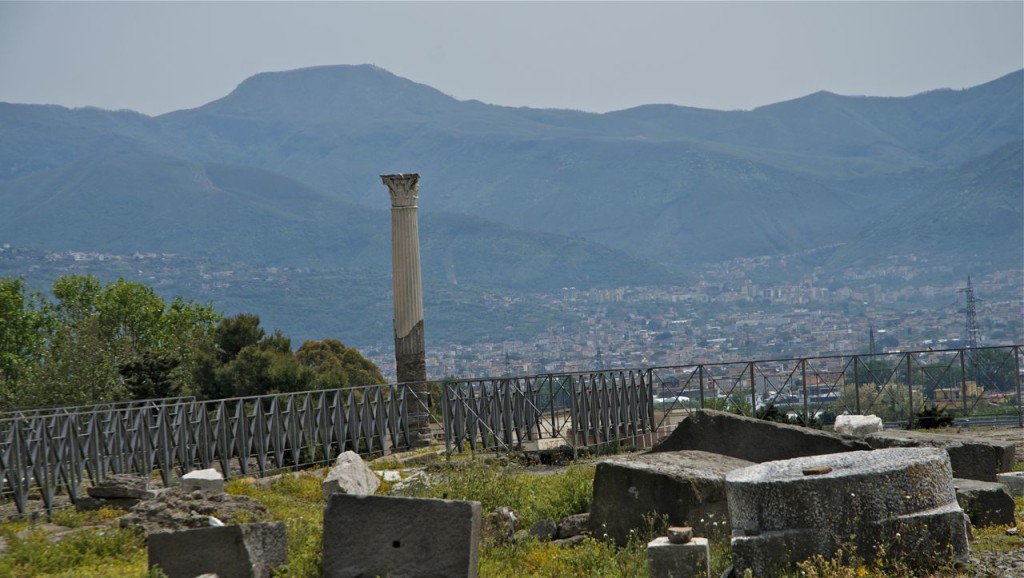 Pliny The Younger: “A gleam of light returned, but we took this to be a warning of the approaching flames rather than daylight. However, the flames remained some distance off; then darkness came on once more and ashes began to fall again, this time in heavy showers. We rose from time to time and shook them off, otherwise we should have been buried and crushed beneath their weight. I could boast that not a groan or cry of fear escaped me in these perils, but I admit that I derived some poor consolation in my mortal lot from the belief that the whole world was dying with me and I with it.” 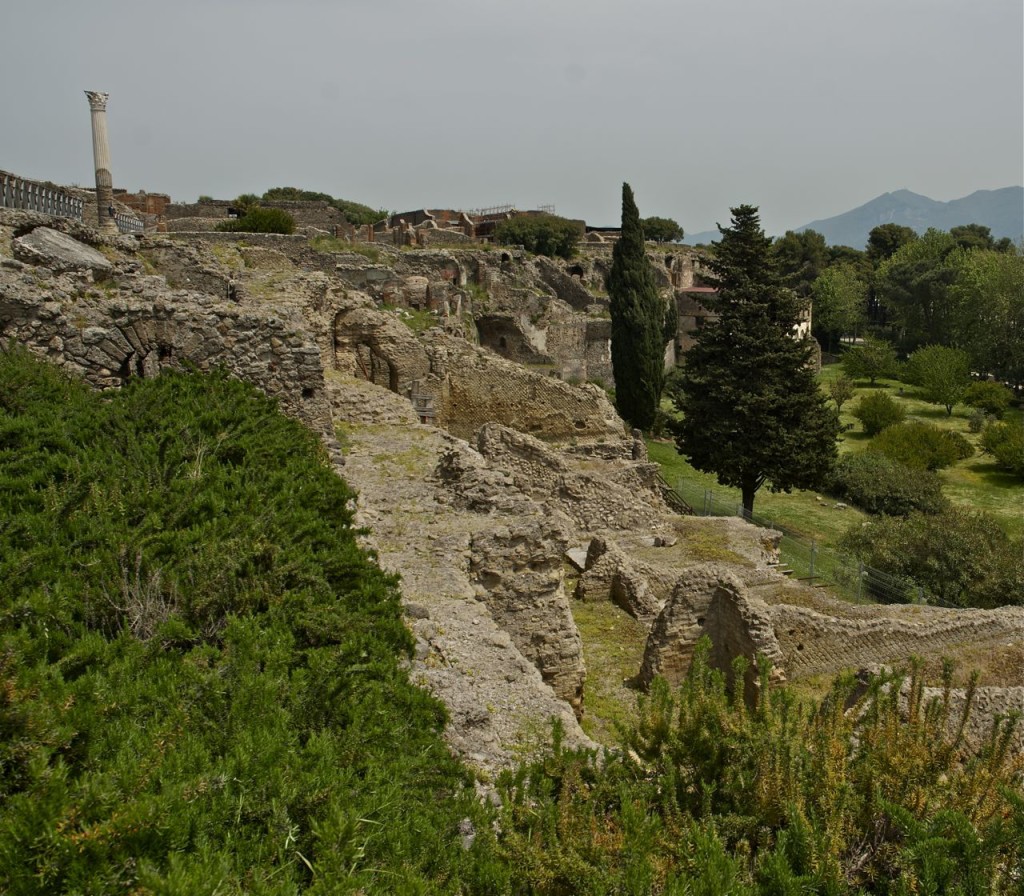 Pliny The Younger watched a huge ash cloud engulf Pompeii as it swept across the bay toward him. “The cloud sank down to earth and covered the sea; it had already blotted out Capri and hidden the promontory of Miseuum from sight. Then my mother implored, entreated and commanded me to escape as best I could….I refused to save myself without her and grasping her hand forced her to quicken her pace…I looked around; a dense black cloud was coming up behind us, spreading over the earth like a flood.”

Pliny The Younger and his mother survived, though the area around Mt. Vesuvius had become a desolate, smoldering wasteland as Pompeii and Herculaneun were buried beneath a mountain of congealing lava. 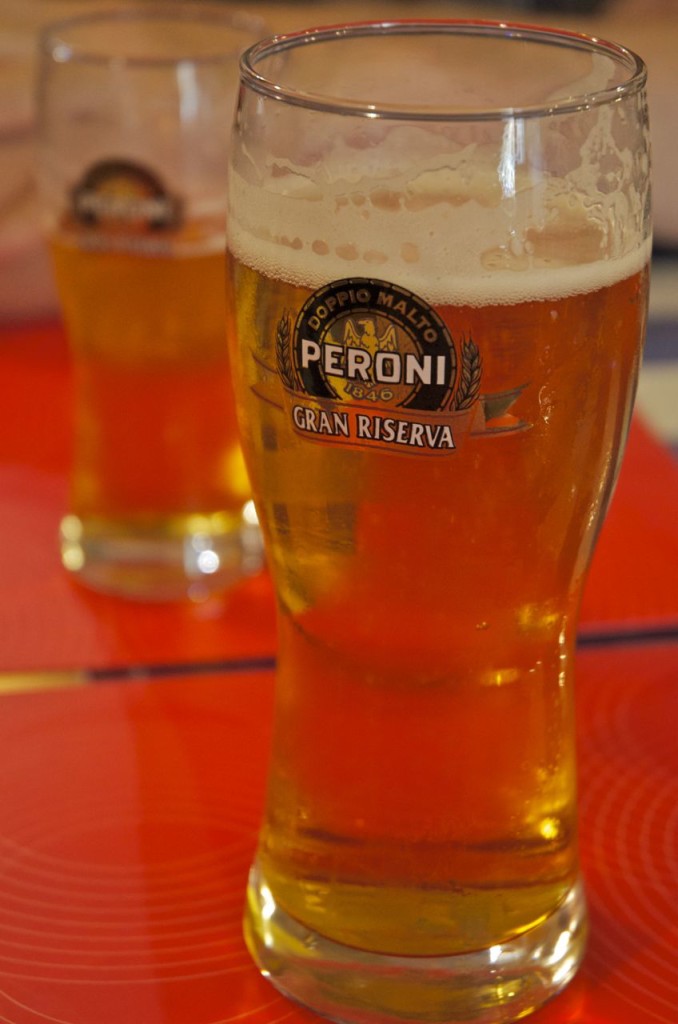 We had trekked through the grounds of Pompeii for hours in the brutal afternoon sun. The temperature was in the high 80s with hardly a shady spot anywhere. A layer of fine dust coated our shoes and our tongues were gritty and parched. We wandered the streets, walking through ancient residences, wondering at structures that appeared to be two-story dwellings without floors, openings where shutters used to close out the unwanted bats that flew about in the evenings. Making our way through this resurrected environment we fell into a trance and wandered aimlessly. Then like an apparition a small child holding an ice cream cone walked past us. Our trance was broken. Our endeavor at that point became intent on finding something cold to drink.

We found an out of the way place, under a small grove of olive trees that sold sandwiches, ice cream and delicious cold beer. The place was air conditioned. We sat inside away from the scorching sun and took long deep swallows of our beers.