It was a perfect weekend to visit a friend who lives in Rockaway Beach, Queens. She didn’t live here in October 2012 when Superstorm Sandy, a category 3 hurricane, hit this beach community. The storm did major damage to Cuba and the Bahamas before traveling up the Atlantic coastline of the US. The high tide and intense wind surge devastated great swaths of coastal communities. It took a lot of work to clean up these areas and make them habitable again. 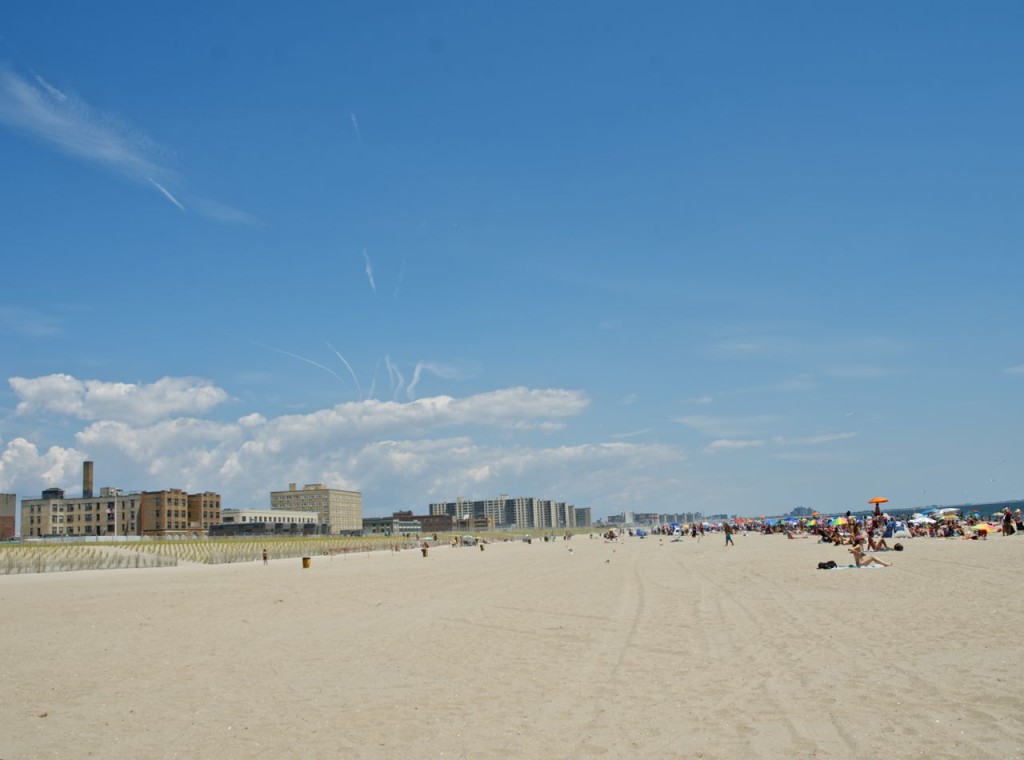 The beach is now pristine. Last year (2014) 65,000 Dune grass stems were planted on an elevated section of this beach. It is hoped that the dense root system of the grass will take hold and help to protect the area from damage of future storms. Between the NYC Parks Department and Army Corp of Engineers a section of the beach from 19th Street to 149th Street has been raised 12 to 19 feet above sea level. 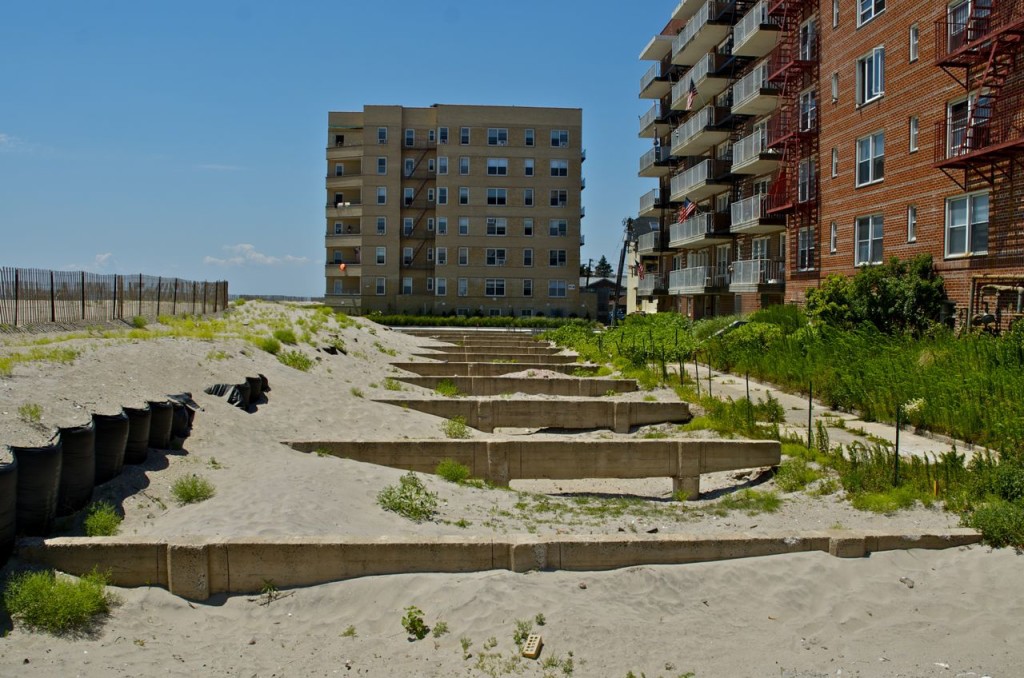 The boardwalk has not been completed the full length of the eleven mile long beach, though the supports for the boardwalk have all been put in place. The area where my friend now lives is only 6 blocks wide from the ocean to a great bay. This entire area was flooded. Many of the homes in this section are constructed of brick and mortar and though they were damaged, at least they were still standing after the storm receded. The residences constructed of wood sustained the most damage. Some homes collapsed or were washed away in the storm. A majority of the residences have been rehabilitated, yet there are still a few homes that remain empty, windows boarded, weeds and grass filling the yards where children once ran squealing and laughing through sprinklers. 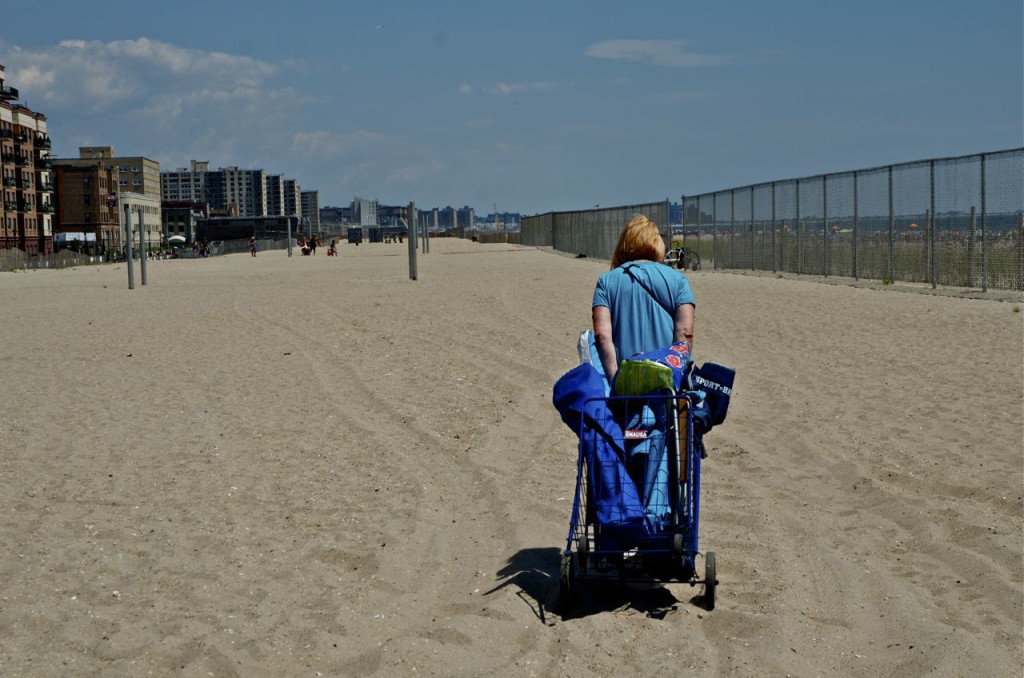 Well, it’s a glorious day and we’re off to the beach with chairs and umbrellas in tow. 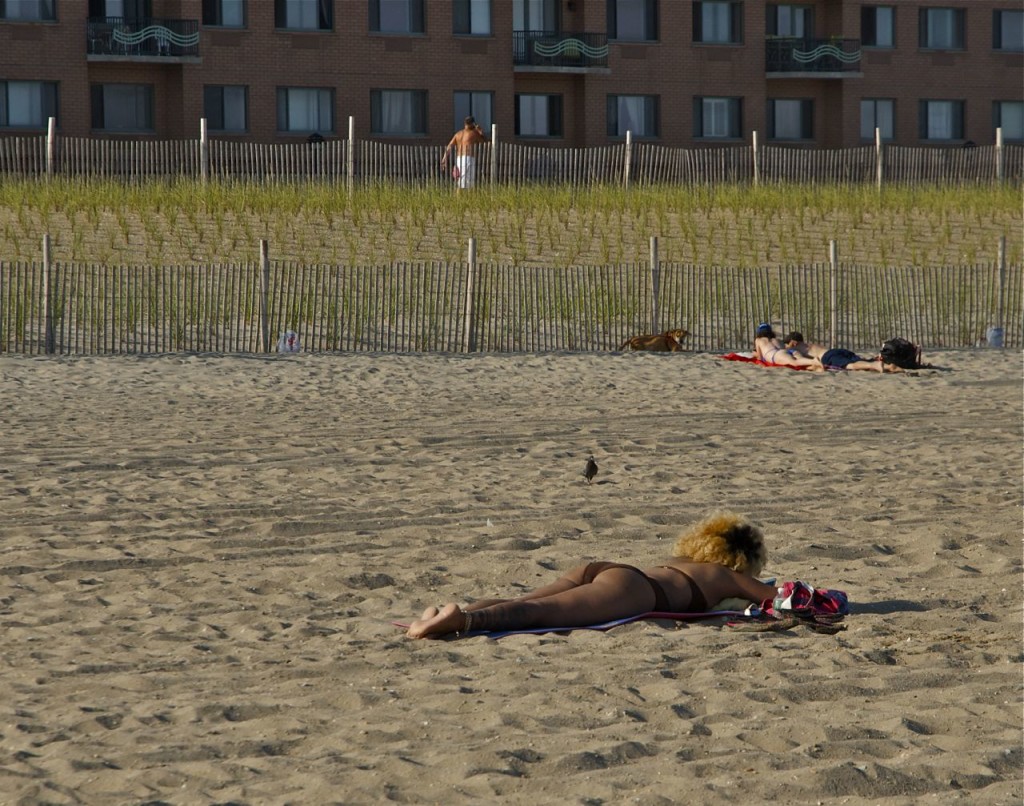 Even though it was early, there were still a large number of  sunbathers stretched out on the warm morning sand getting a head start on their tans. 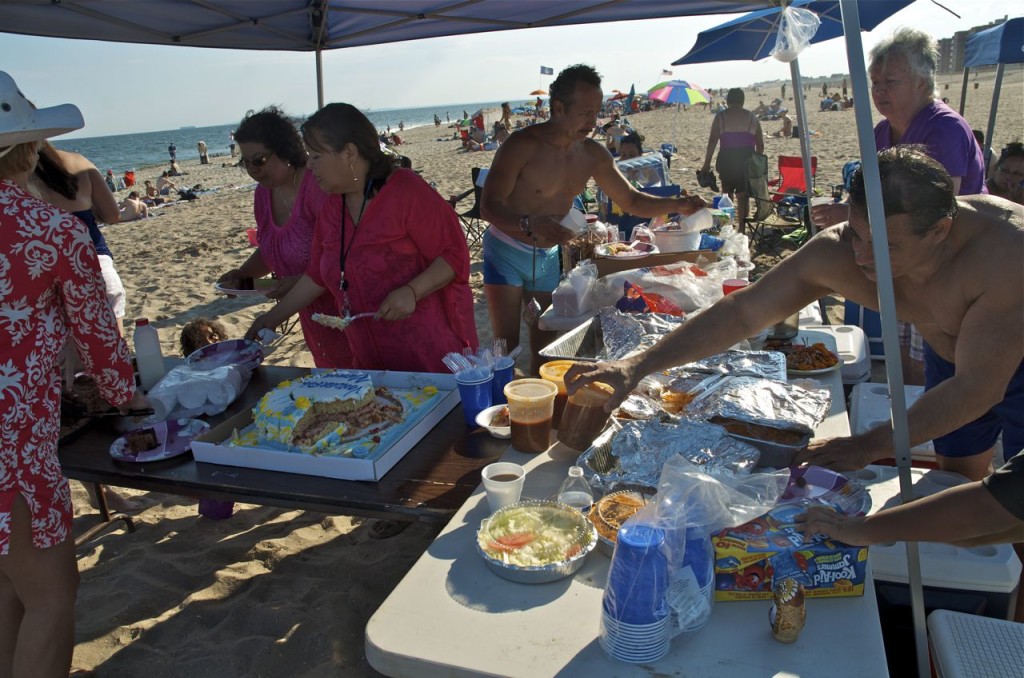 We were joining a group of locals who periodically throw a big bash on the beach to celebrate a birthday, a homecoming or to just have a party for the sake of having a good time. Today there was roast pork, rice and beans, mofungo (smashed, cooked green plantains with either meat or fish tidbits mixed in) three different kinds of empanadas, and salad. 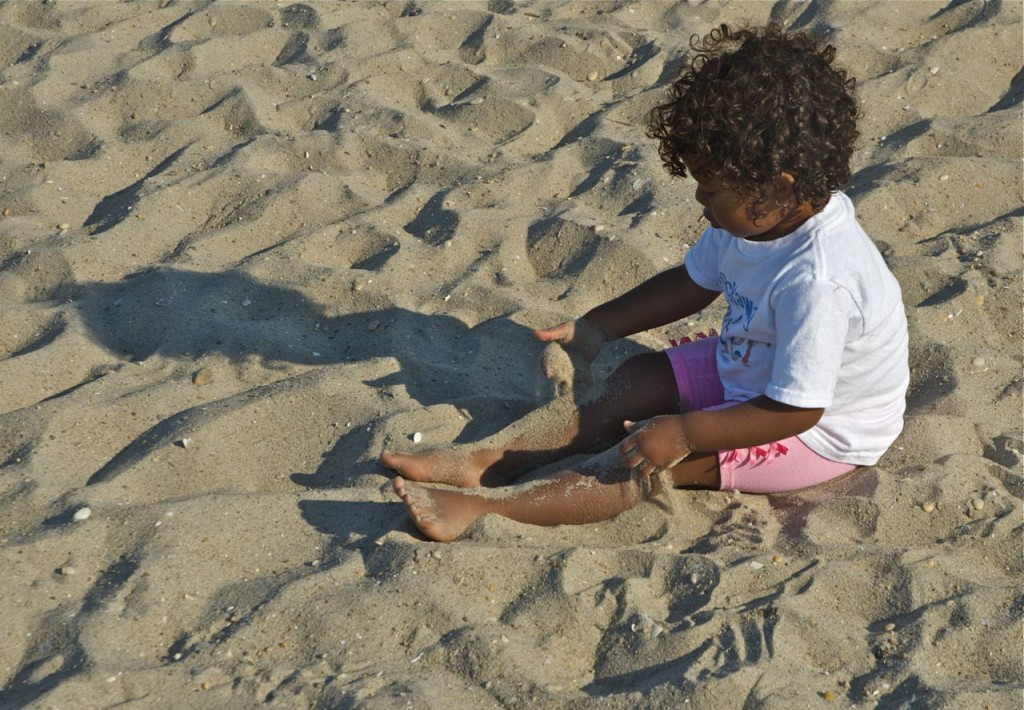 We sat around eating, talking, laughing. Children played in the sand. The shadows grew longer and deeper as the lazy morning sun moved overhead, dipping farther into the west. 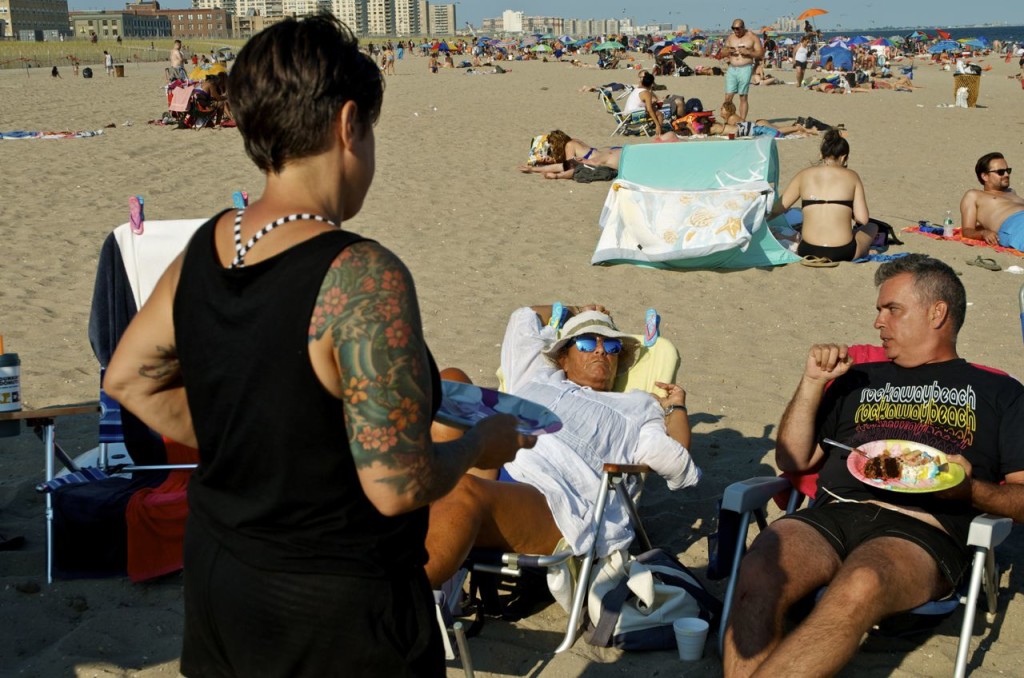 The feasting went on all afternoon and then when we thought we could eat no more, two cakes arrived; a huge vanilla confection with cherry filling and a luscious creamy icing, and a dense chocolate cake with an intense whipped cocoa topping. 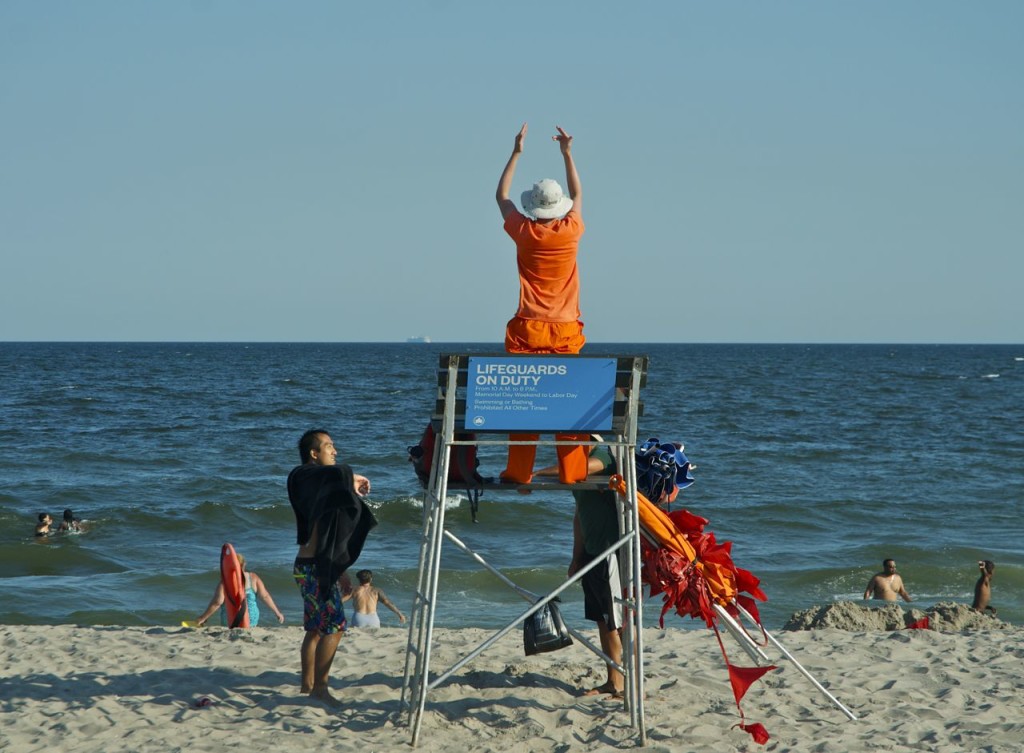 The surf appeared to be quite calm. But that can often be deceiving. There was a major undertow. The lifeguards were busy all day blowing their whistles and directing people to come closer to the shore. There had been several rescues earlier that morning, while the afternoon was free from any potential tragedy. 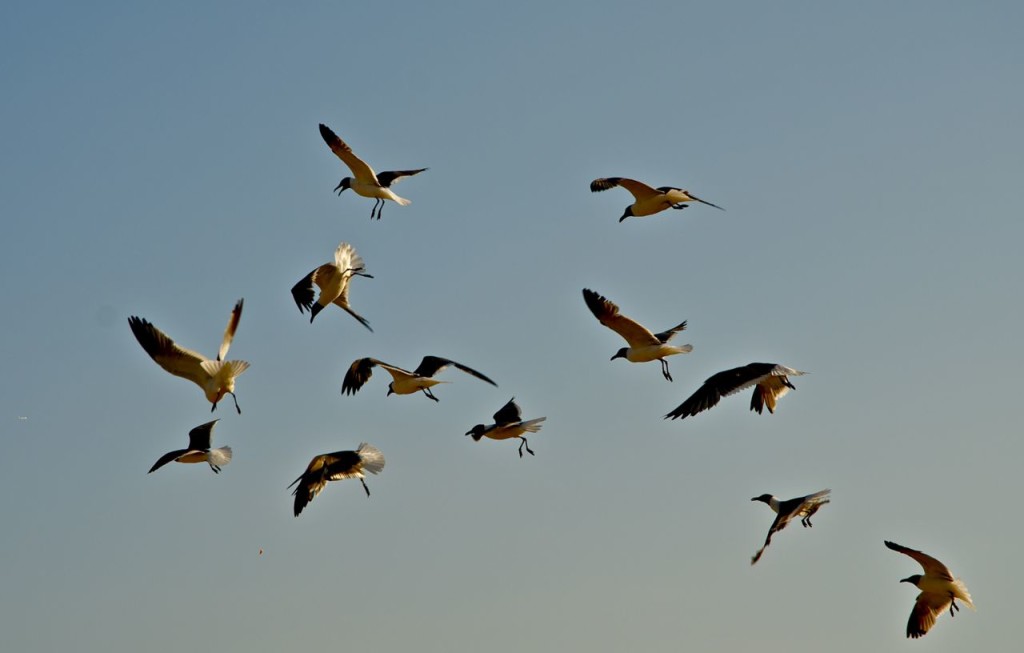 Late in the afternoon when the beach crowd thinned out, someone nearby threw their unwanted french fries into the air, attracting the attention of a flock of laughing gulls. These beach birds are so named because their high pitched call sounds like ‘ha-ha-ha’. These gulls are all white apart from their dark grey back, wings and black head. They are aggressive and eagerly preformed air-obatics for us as they swooped and dove attempting to catch the cold, greasy morsels. 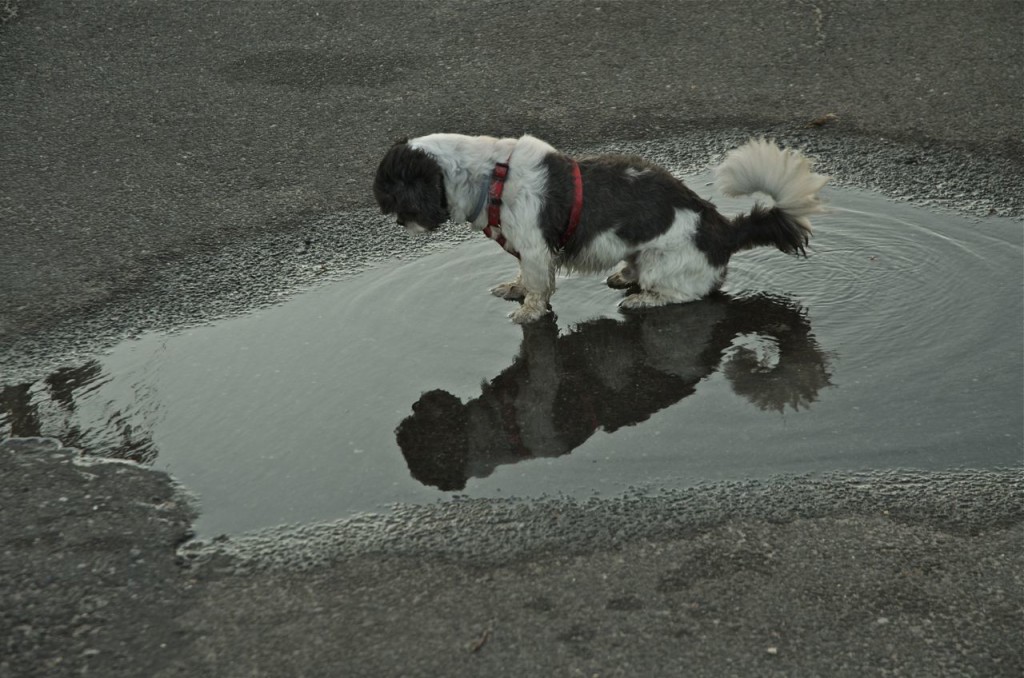 When we were finished with our day at the beach and headed back to the apartment building we found Merlot, a Shih Tzu, standing in the middle of the street in a puddle. Merlot hangs out here for hours its owner said. It wags its tail, watches its reflection, and keeps away any pigeons that might want to take a summer dip in what Merlot considers it’s private pool.

Once inside, out of the sun, we take off our sandy shoes, unload the beach furniture and plopped down onto the couch. Ah, just another day in paradise.

← POMPEII
A LOVE OF WATER →

6 comments for “JUST ANOTHER DAY IN PARADISE”