One of the requirements for where I live is that I not be landlocked. I cannot swim. I get nervous when I’m in water above my waist. I’m fearful of snorkeling. I easily get seasick when I’m on a boat. All that considered I really must live within a close proximity to large bodies of water. I prefer the ocean, but a large restless lake would probably work just as well. The constant movement, the power and energy, the shifting tides put me in a meditative mood.

I’m not a big fan of crowded beaches, though there are always so many delightful scenes with people of all ages jumping, swimming and playing in the surf, that I cannot help but be drawn to the energy . When I look out into the crowded surf I realize how other people also find their peace and contentment from large bodies of water. 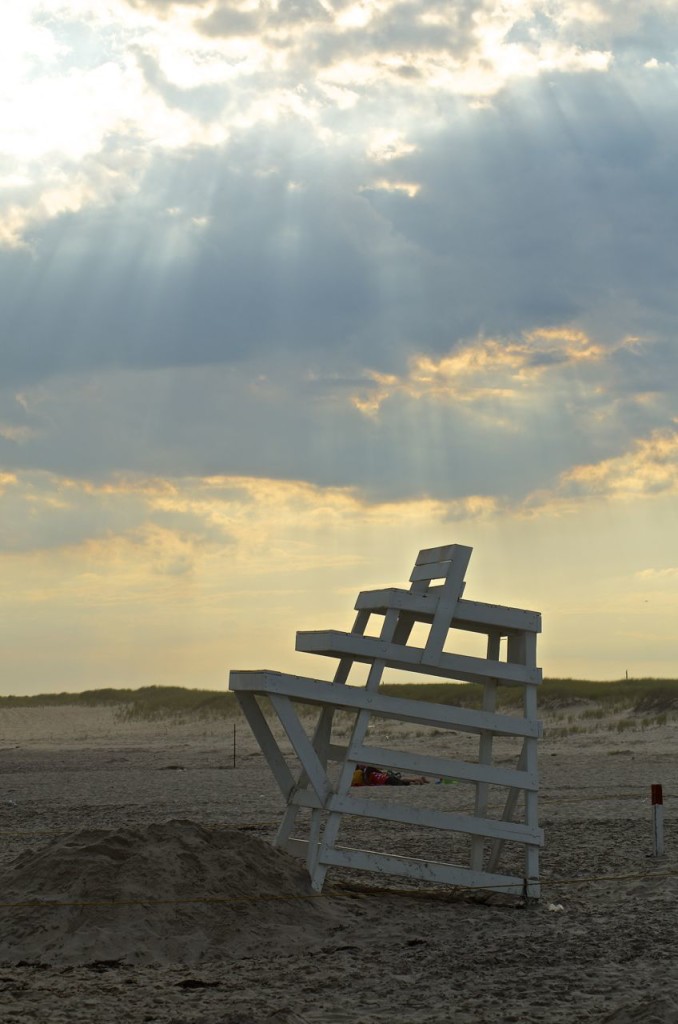 But ultimately I prefer the quiet evening or early morning on the beach. 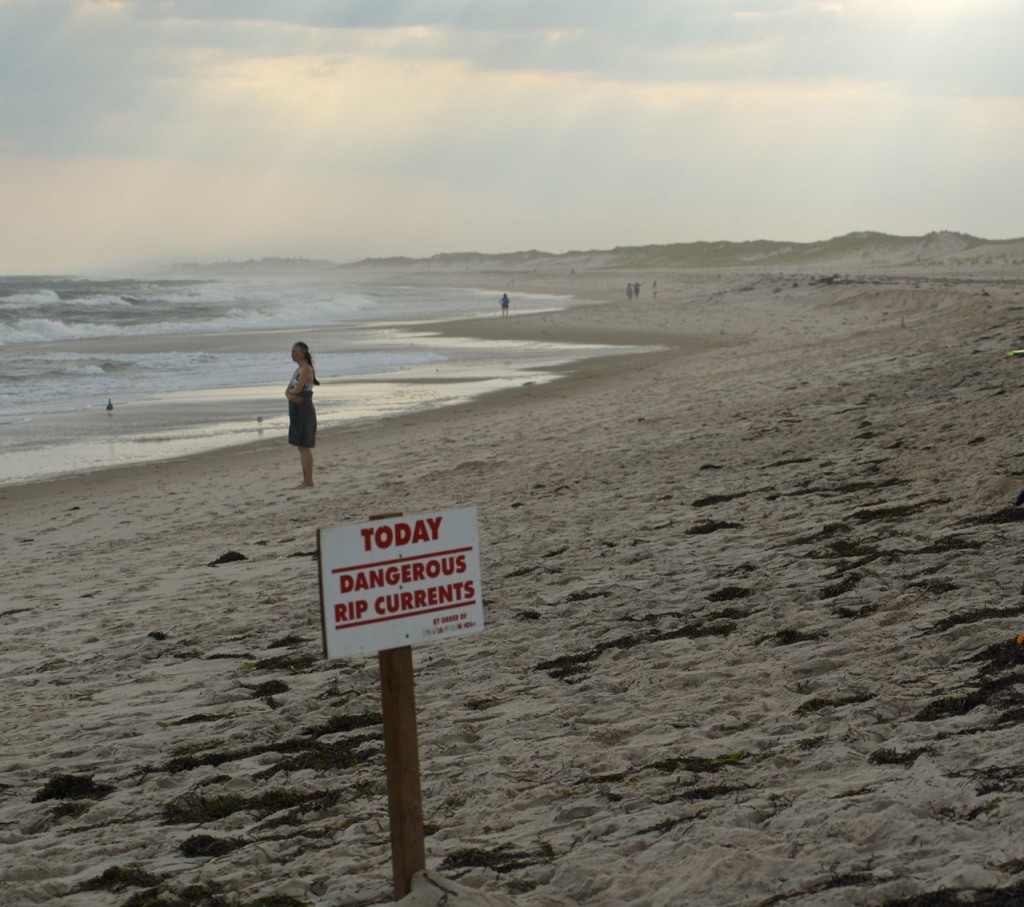 It’s now the end of August. The weather is so unpredictable that it’s hard to tell how long the pleasant beach days will last. Though New York has not had a lot of bad storms, the rip currents have been quite frequent this summer. 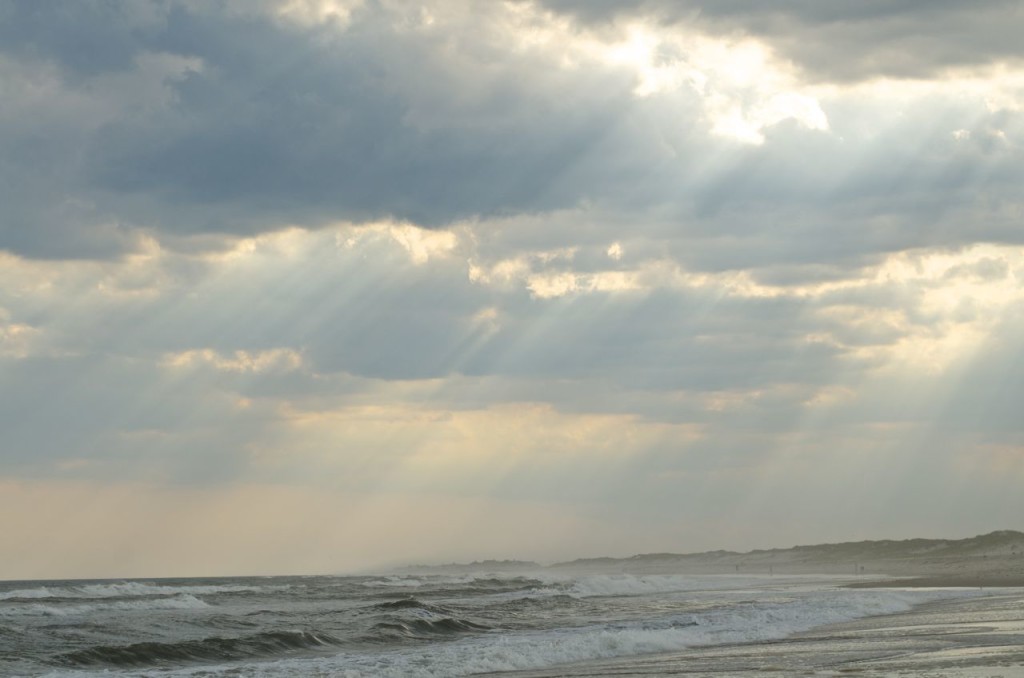 Shifting light, quick moving clouds and an agitated surf is poetry to me. 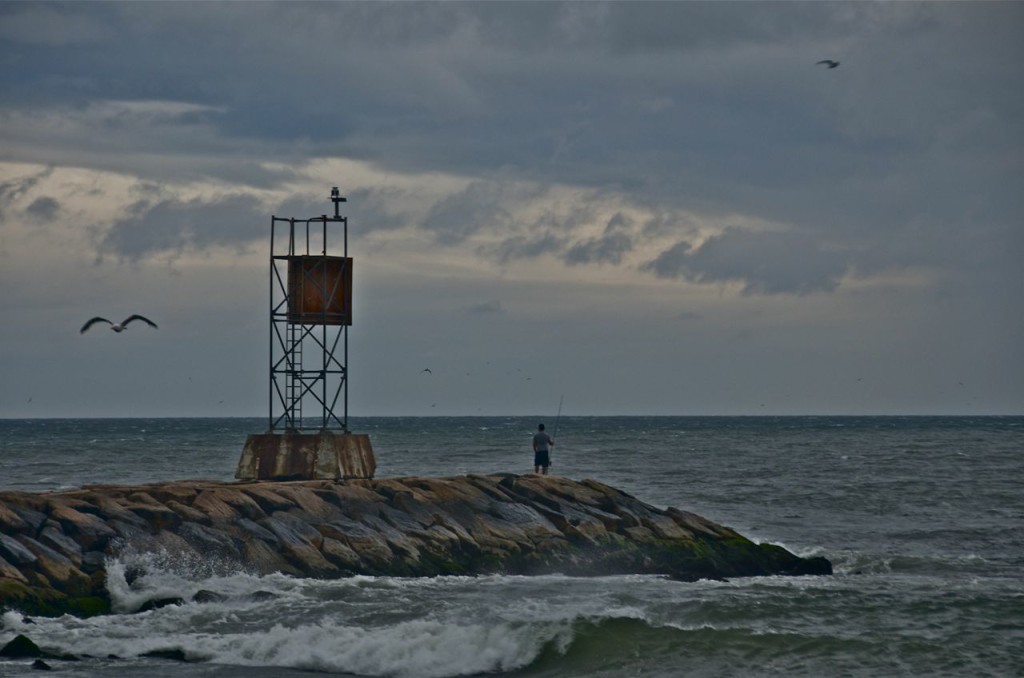 I, too enjoy fishing. There is a meditative quality to this kid of fishing, along at the waters edge, with gulls as fleeting companions. The hope of catching something at these peaceful times is irrelevant. It is the contentedness that matters, the letting go of worries, work problems and quite frankly for me it’s a time to let my writing slip to the back of my brain and give me a rest from plot and character development. 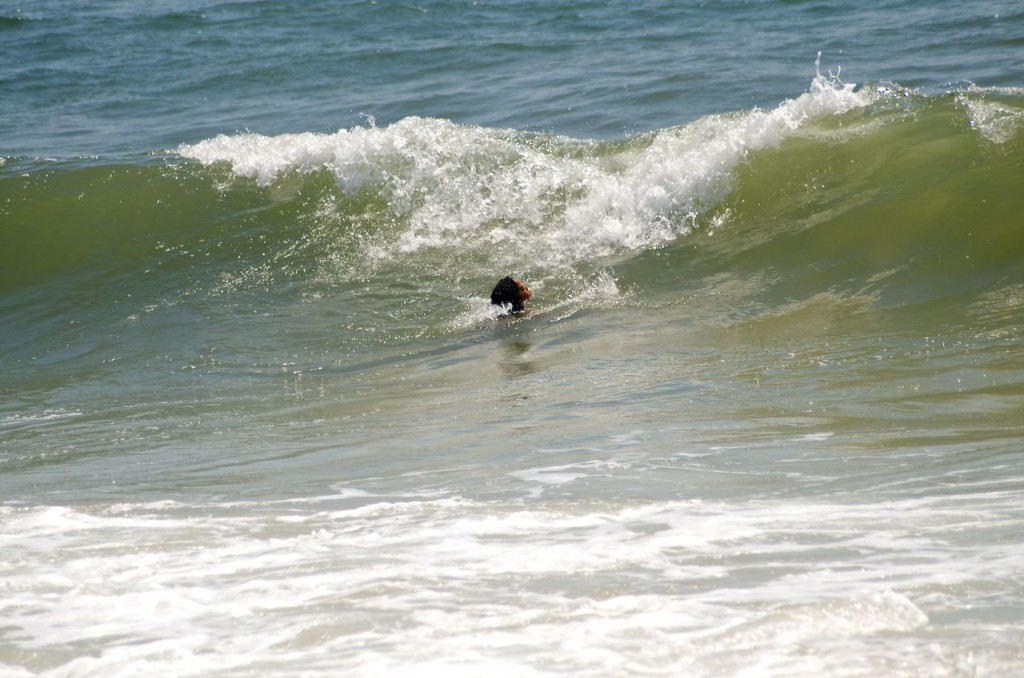 My grandson, though respectful of the power of big water, is a fearless surfer and swimmer. He likes to be tossed about in the waves. He likes to have water wash over him, scoop him up and wash him to shore. This is fun to him. 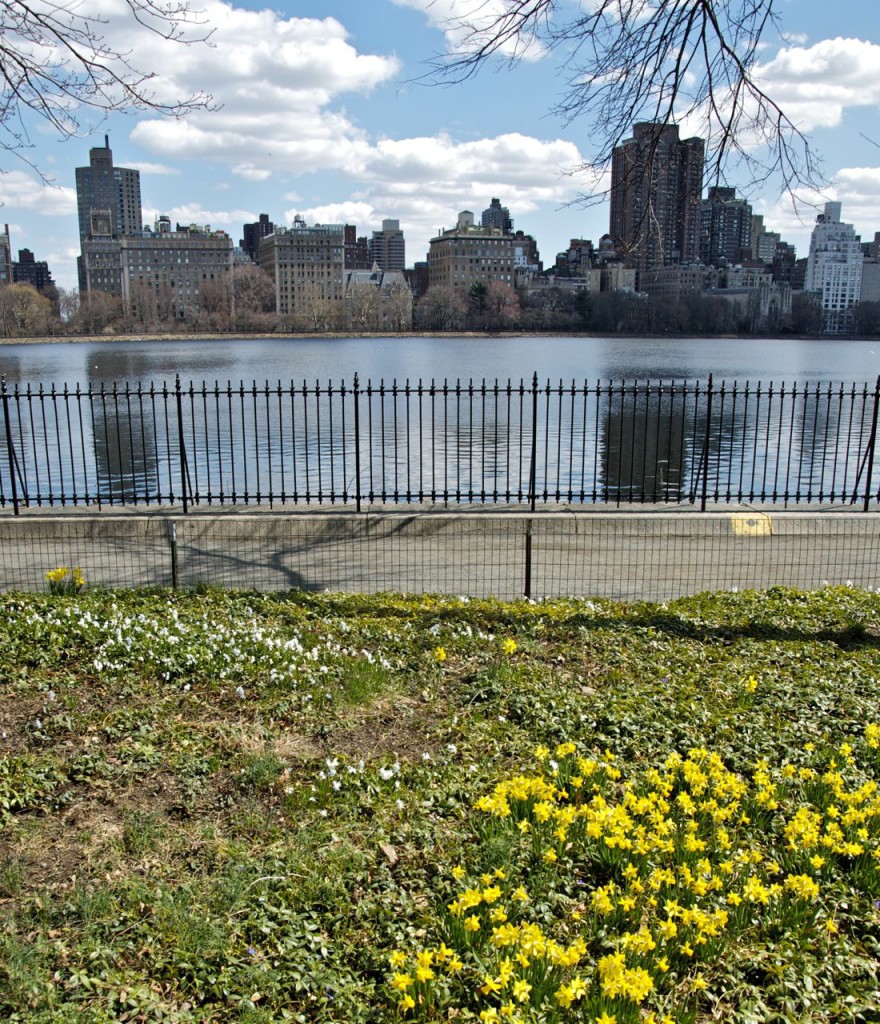 I live close to the Central Park Reservoir. I frequently take walks around the 1.58 mile jogging path that encircles the 160 acre body of water. It is lovely and still much of the time, though when there’s a storm the water makes just as much of a ruckus as any water in a gale. The path is open year-round though it is quite muddy in places when the season is a wet one. 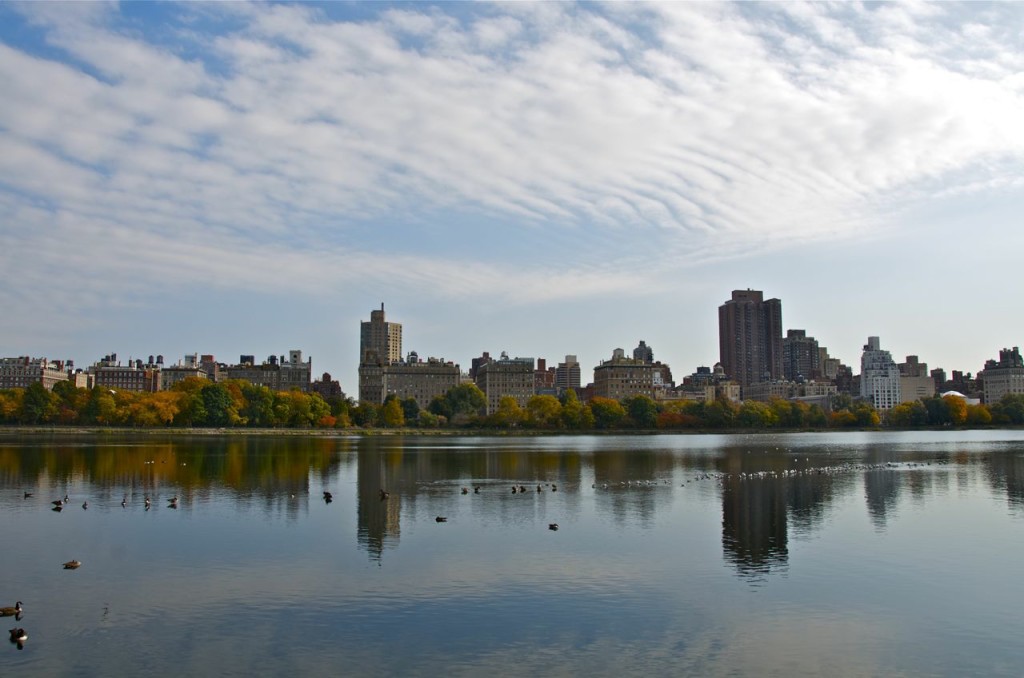 The fall is a particularly beautiful time to walk around the reservoir. Migratory birds use the area for a stop-over while heading south for the winter. Some days the scene around the reservoir is breathtaking with clouds playing in the light in the sky with the autumn foliage encircling the shoreline. 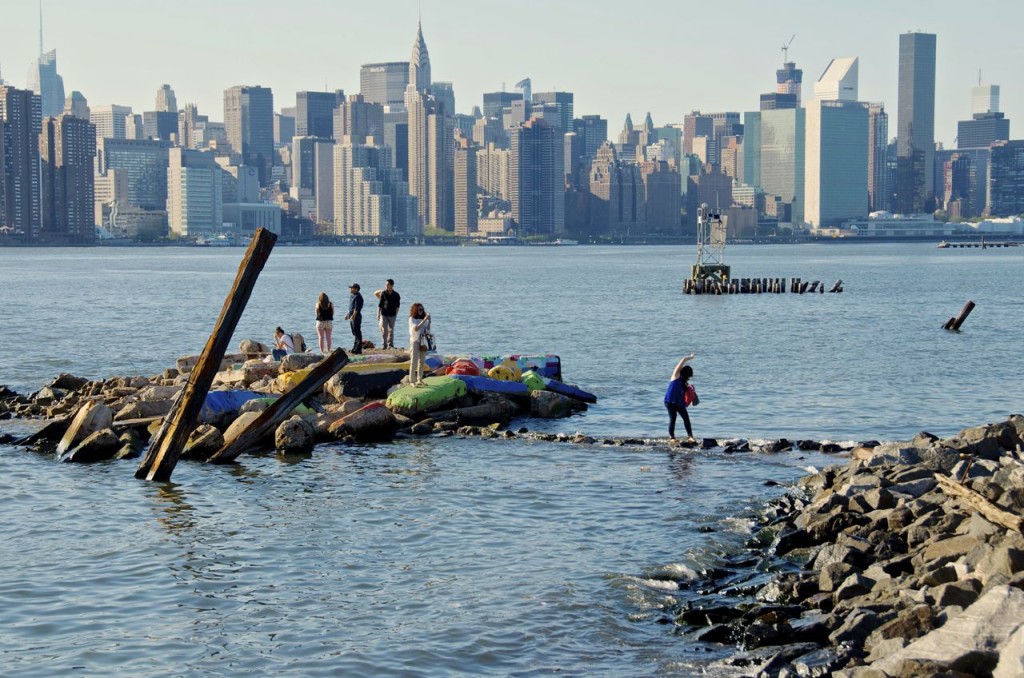 The East River is the body of water that runs between Manhattan and Brooklyn. This is one section of the East River State Park in Williamsburg, Brooklyn. At low tide a tricky walk of boulders makes it possible to travel out to a small island. I’ve seen people attempting to walk this precipice even in a near high tide. 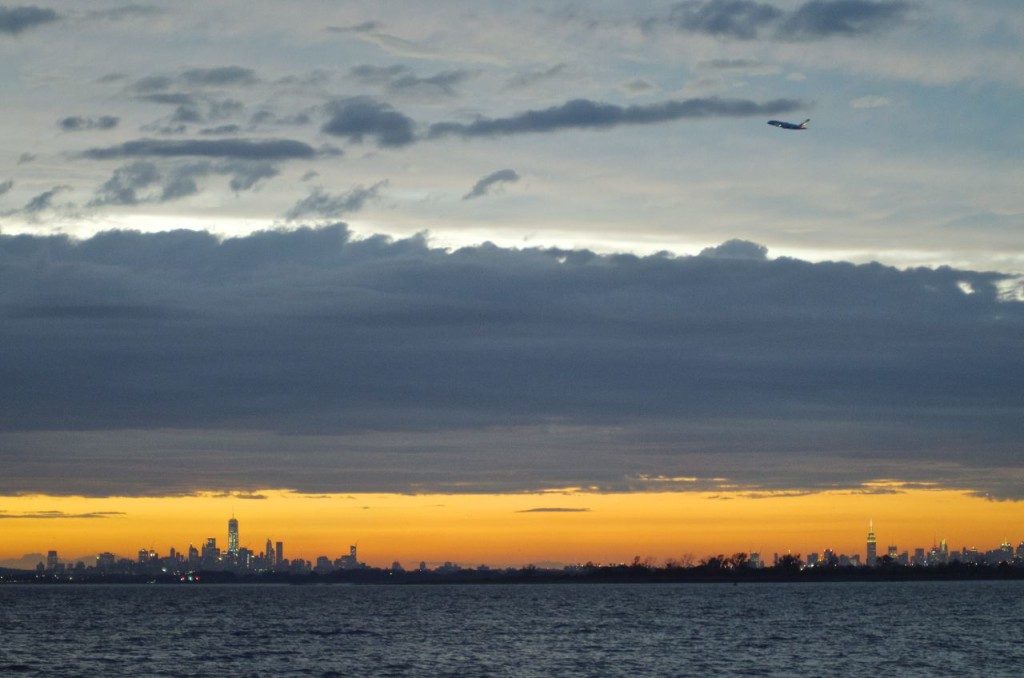 New York City proper is an island. I sometimes forget this while walking the busy and crowded streets with nothing but sky scrapers to see for blocks and blocks. This is a sunset photo of Manhattan that I took while visiting Rockaway Beach in Queens. The J. F. Kennedy Airport is just a little east of where I’m standing to take this photo. This body of water is Jamaica Bay. It’s a lagoon, a salty stretch of water that is separated from the Atlantic Ocean by a barrier island that stretches from Rockaway Beach in Queens to Coney Island in Brooklyn. 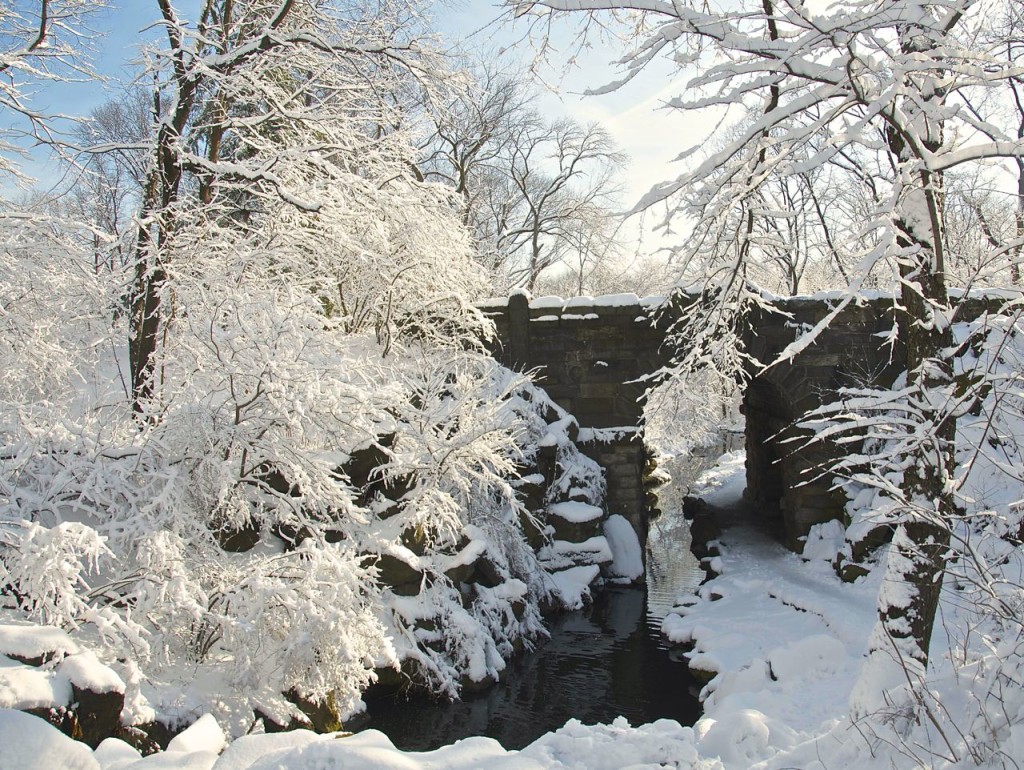 My love for the water views does not end when we get into the winter season. The reservoir often freezes over. Winter fowl and sea gulls walk about the icy surface leaving the pristine snow rugged looking and filled with their droppings. I tend to walk to other parts of the park on these cold days looking for other scenes of water. There’s plenty to see in Central Park. Even in the winter, water bubbles up from natural underground streams and though there might be sheets of ice here and there, the faster moving water often remains accessible to animals and birds. 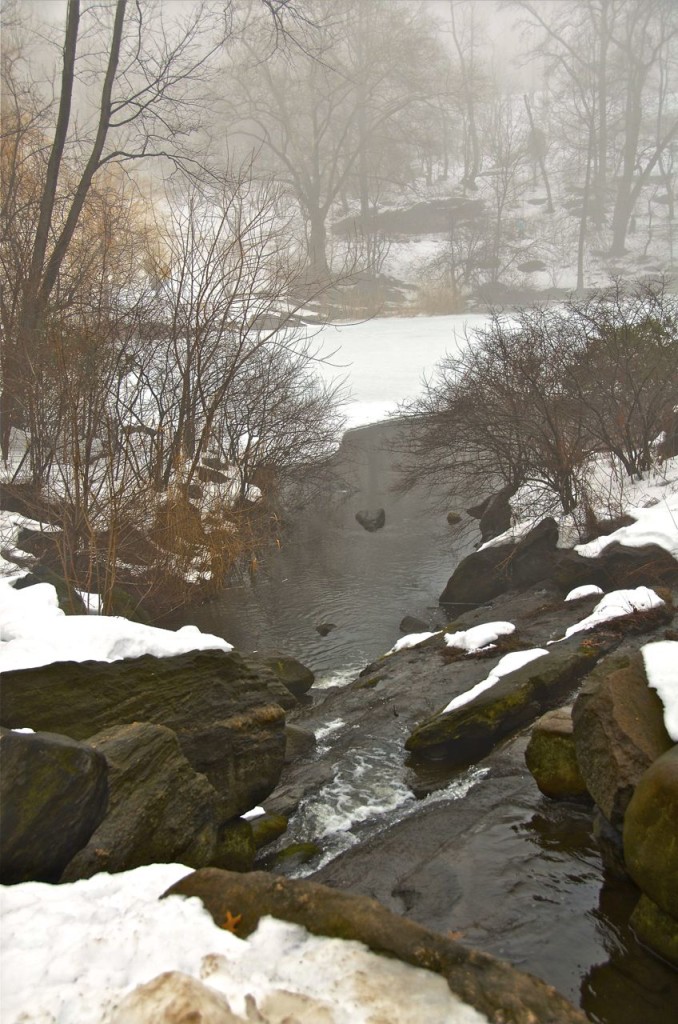 On these freezing winter days there are so few people in the park I could believe that Central Park is mine alone. I meet up with dog walkers, their pups dressed in winter jackets and little snow booties. We nod to each other. Sometimes we briefly discuss the weather. 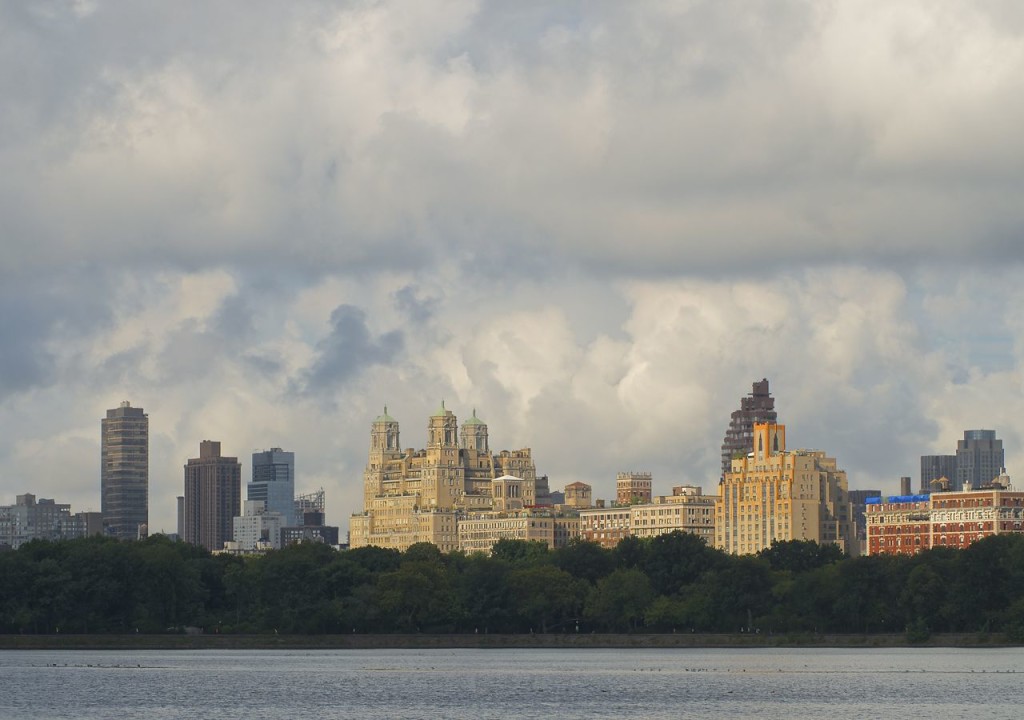 This is a photograph of the Reservoir I took last week. The season is what I would call ‘hard summer’. It’s still sticky and hot. The sun is still pretty low in the sky, though it is brilliant. It has started to set earlier in the evening. The trees look to be about a green as they get before they start to shift into the cold weather mode. There are more people walking in Central Park these days with binoculars looking for signs of bird migratory action. The Reservoir more frequently turns a steel grey color as the sky shifts and churns with late summer energy. I’ll probably get out to Rockaway Beach and Long Island a couple times during the winter months, maybe even before the first snow fall. But if I don’t get to see the edge of the Atlantic Ocean any time soon, I’ll at least have my Central Park Reservoir near me to visit.

← JUST ANOTHER DAY IN PARADISE
VISITING THE WEST COAST →

6 comments for “A LOVE OF WATER”