The first week in September we traveled to Seattle for an overdue visit with family.

Instead of going to a hotel we decided to make our accommodations through AirBnB, a website for people in the private sector to list, find and rent lodging. We selected the areas we were interested in staying. Dozens of possibilities popped up. There were rooms in private homes, some with kitchen privileges and some without. There were complete homes available. We could even share a room with someone and have use of a communal bathroom. The choices were many and the prices varied. 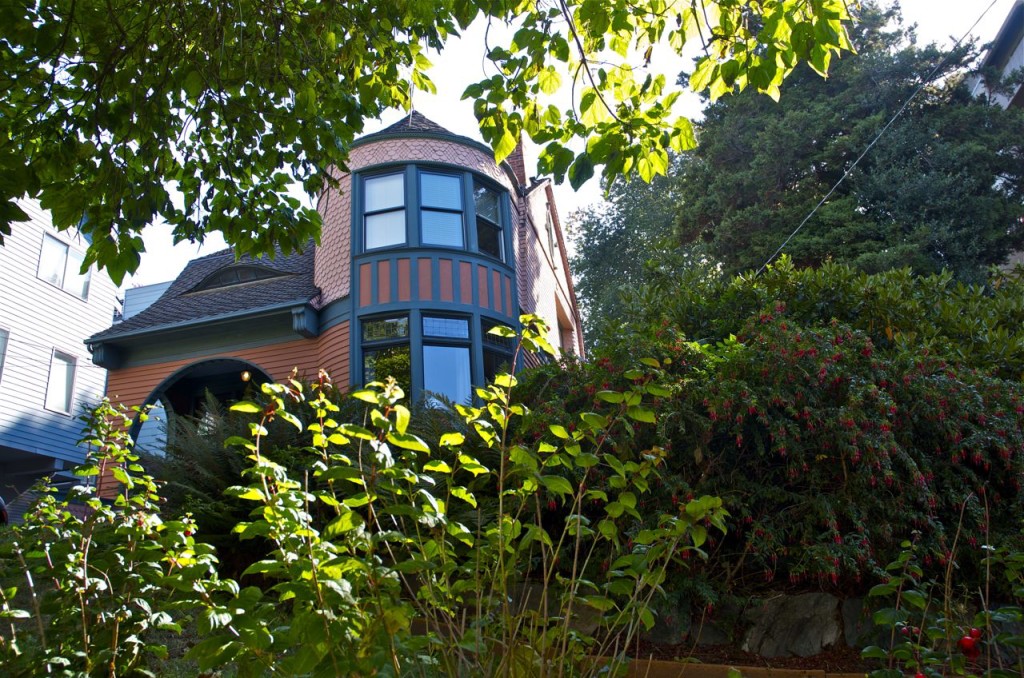 We decided to stay in an Airstream trailer that was parked in the backyard of this lovely 120-year-old historical landmark home.

It was love at first sight. It was so cool looking, sitting there all sparkly and polished.

It sounded like a fun thing to do. We’d have it all to ourselves with a kitchen, bedroom with a queen-sized bed, a full bathroom with shower, and a dinning area. 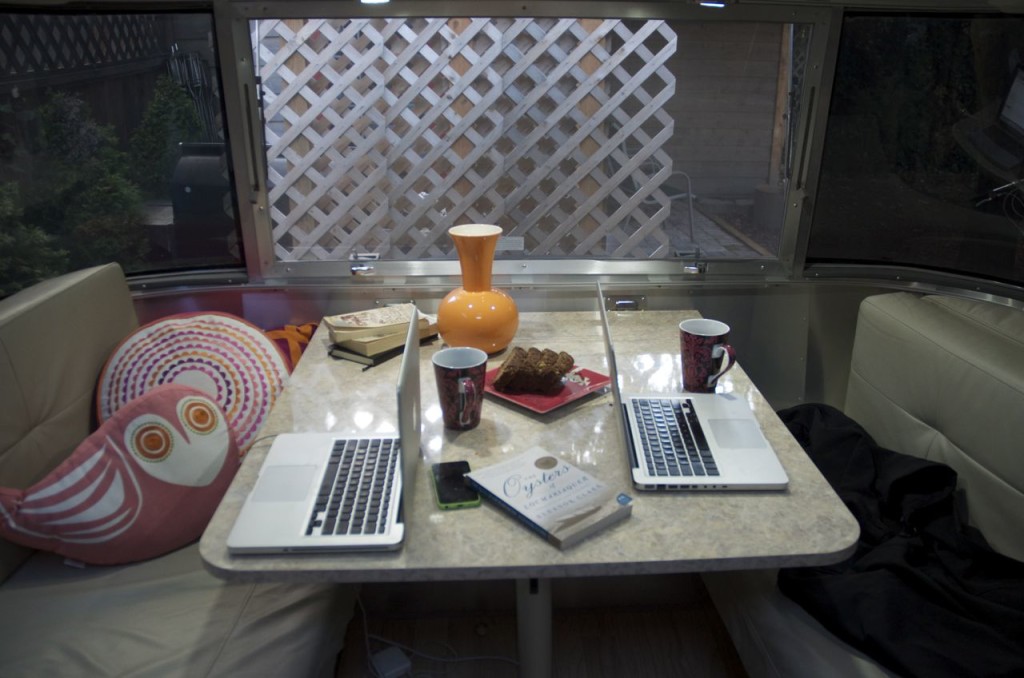 After checking in we quickly got comfortable with cups of coffee and a plate of homemade banana bread that Nadine, our hostess, had waiting for us.

We plugged in our computers and we felt at home right away. 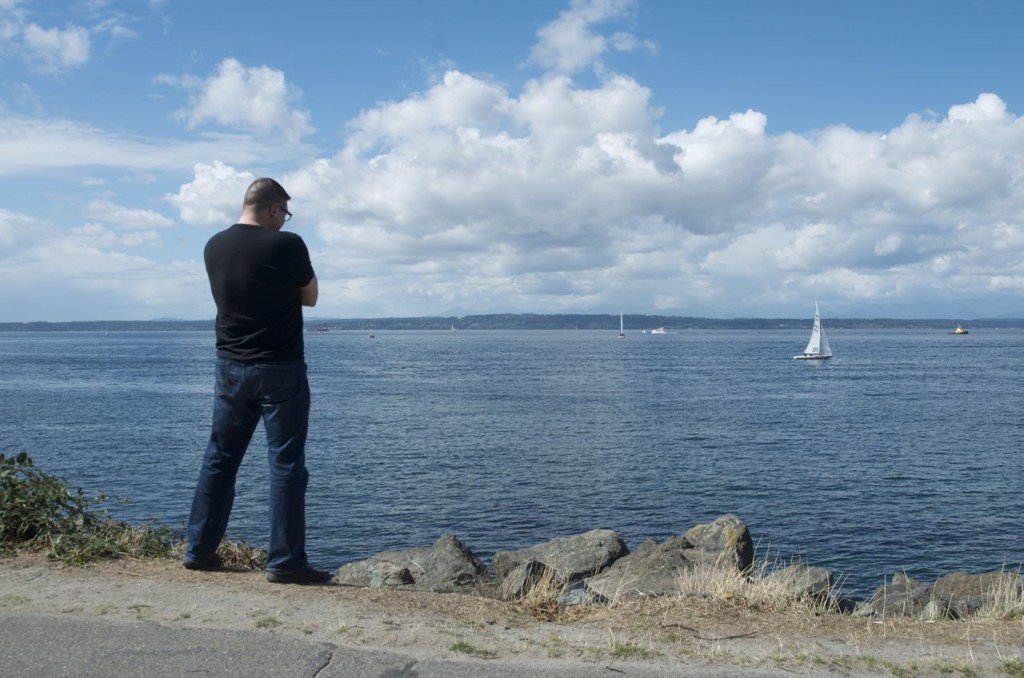 Our son, David, who now lives in Seattle, took time off from work to hangout with us. Though one day while we sat at the water’s edge watching the sail boats go by, he got a work call. I couldn’t resist taking this photo. Really, this is not a shabby place to do a little business on a day off. 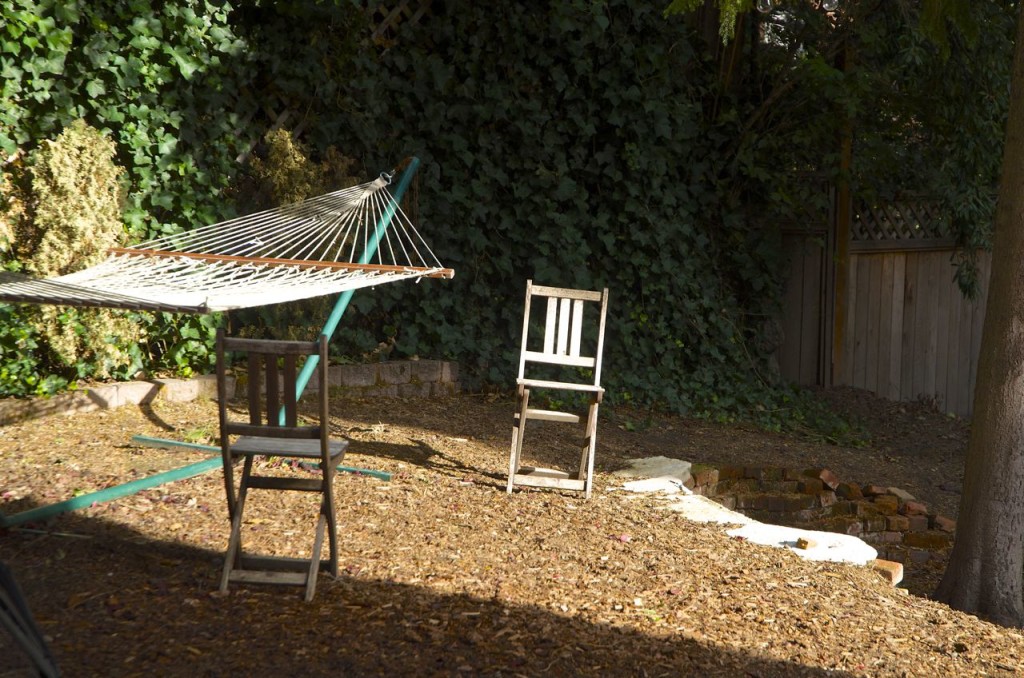 Except for the periodic visits by our host’s two dogs, we had the backyard to ourselves. There was a hammock for our personal use too, with an amazing stream of sunshine that slowly moved across the area in the afternoon. By dinnertime the shadows of the surrounding trees swallowed the sunshine and the area became drenched in a luscious dark green from the surrounding foliage. 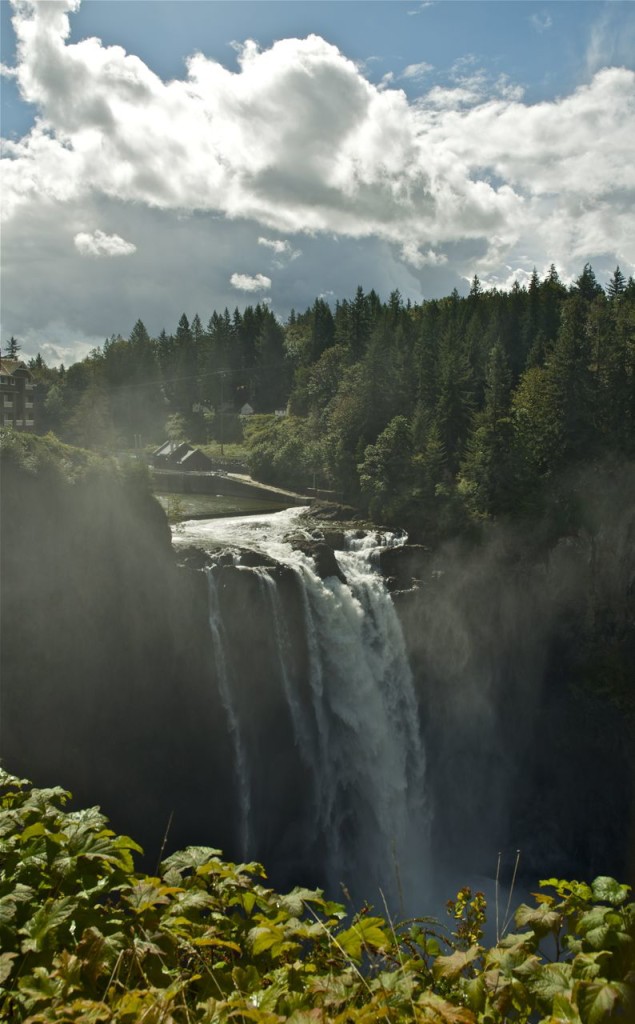 When my sister arrived for a short visit, we went to the Snoqualmie Falls, a forty-five minute drive outside of Seattle. We got caught in a tremendous downpour while looking at the falls. Then when the storm clouds floated away we quickly dried out and found ourselves standing in a brilliant sunshine with the mist from the falls floating all around us. 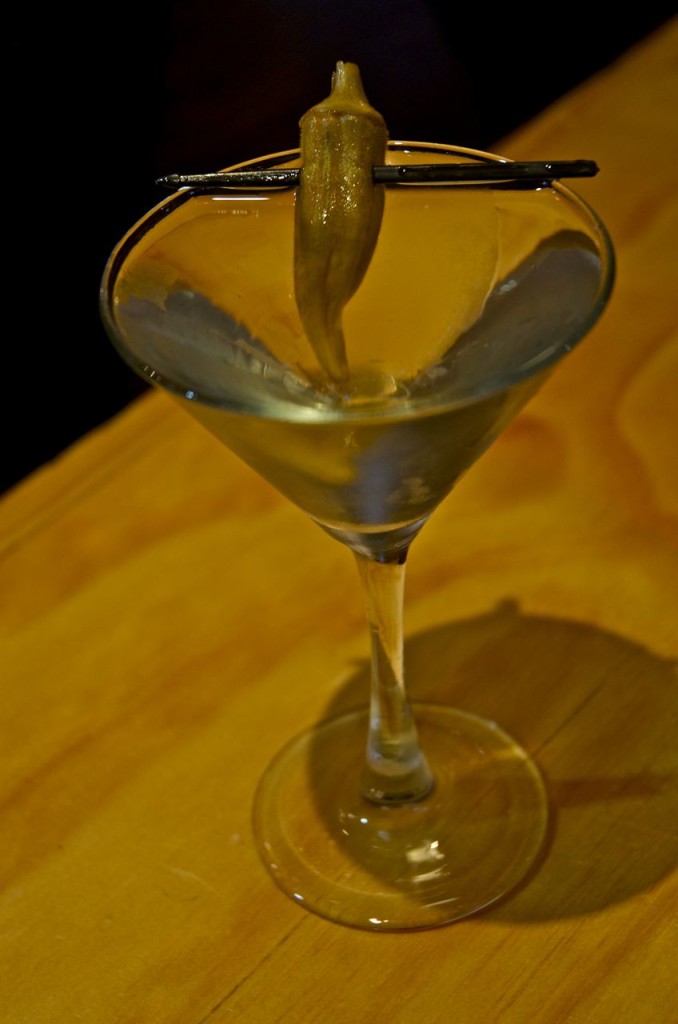 One night we went to a BBQ joint. The waiter told us that if one person from our table ordered a liquor drink, we would all get unlimited rib tips. So, I volunteered to get liquored up, while everyone else went for a tasty local beer. I ordered a martini. However instead of an olive or a twist, this martini arrived with pickled okra. BTW the okra was delicious. Yeah, the martini was a good one, too. 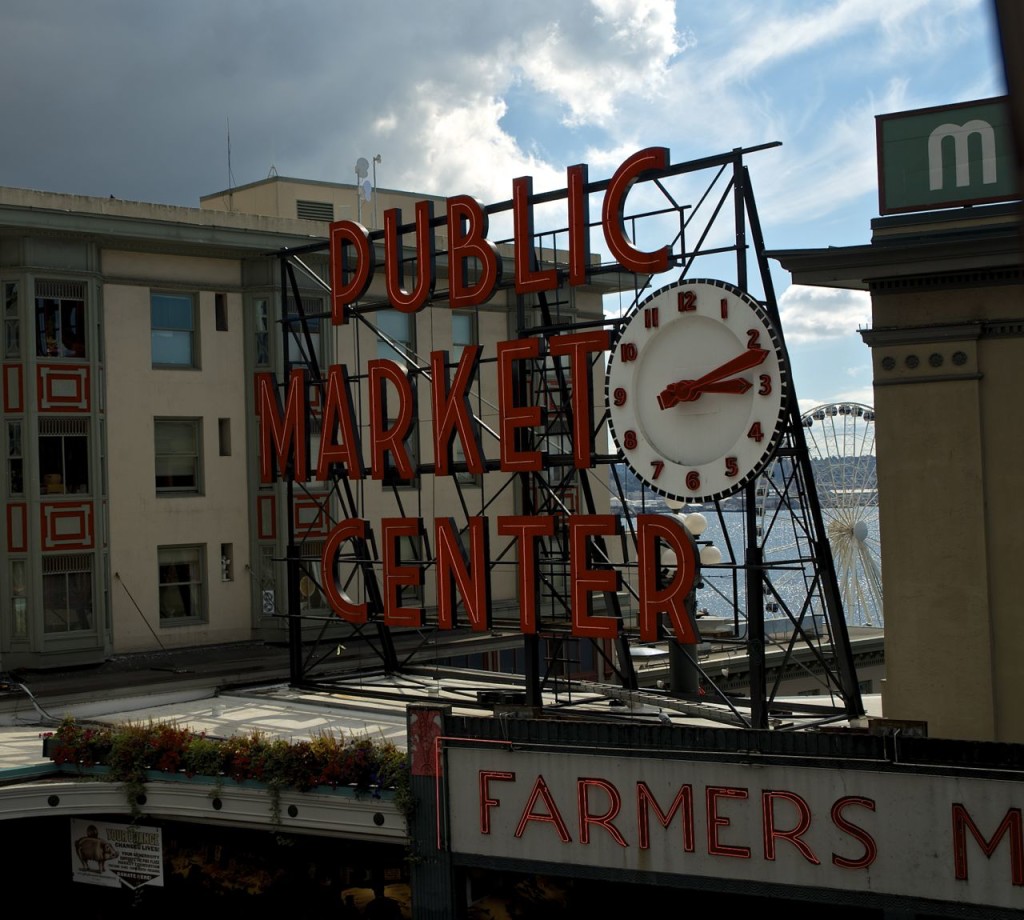 No trip to Seattle is complete without at least a quick stop at Pike’s Place. Though it is a touristy place, it’s still a lot of fun. After we spent a couple hours rambling through the shops I couldn’t resist buying T-shirts for the grandkids. 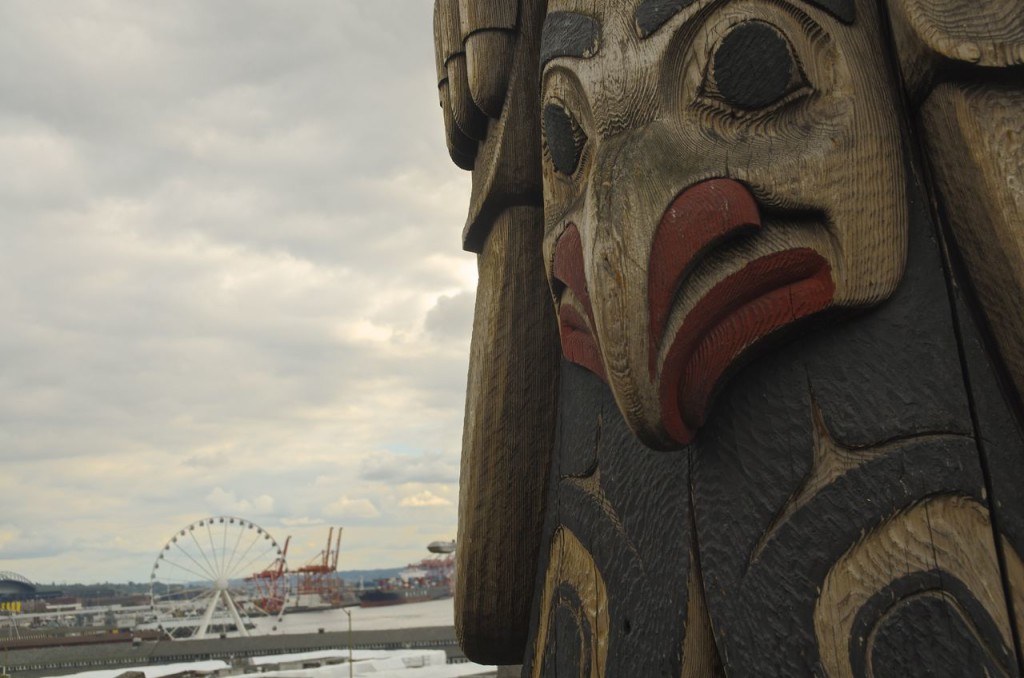 A couple years ago a giant Ferris wheel was erected on the waterfront. We took a stroll along the promenade where there are several totem poles situated along the walkways. You don’t see any of these in NYC. These powerful looking carved characters fascinate me. They make me feel like I’ve come home. When I was a teenager we would go for hamburgers at a place call Totem Pole Inn. 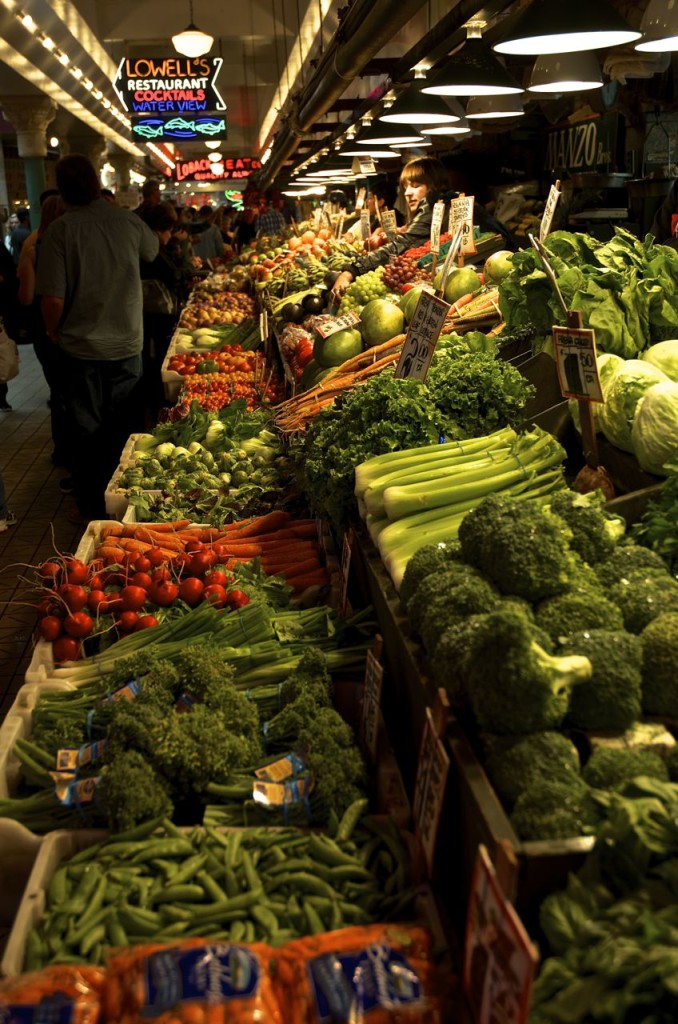 The produce on the long counters in the Pikes Place Market always look so wonderfully fresh. 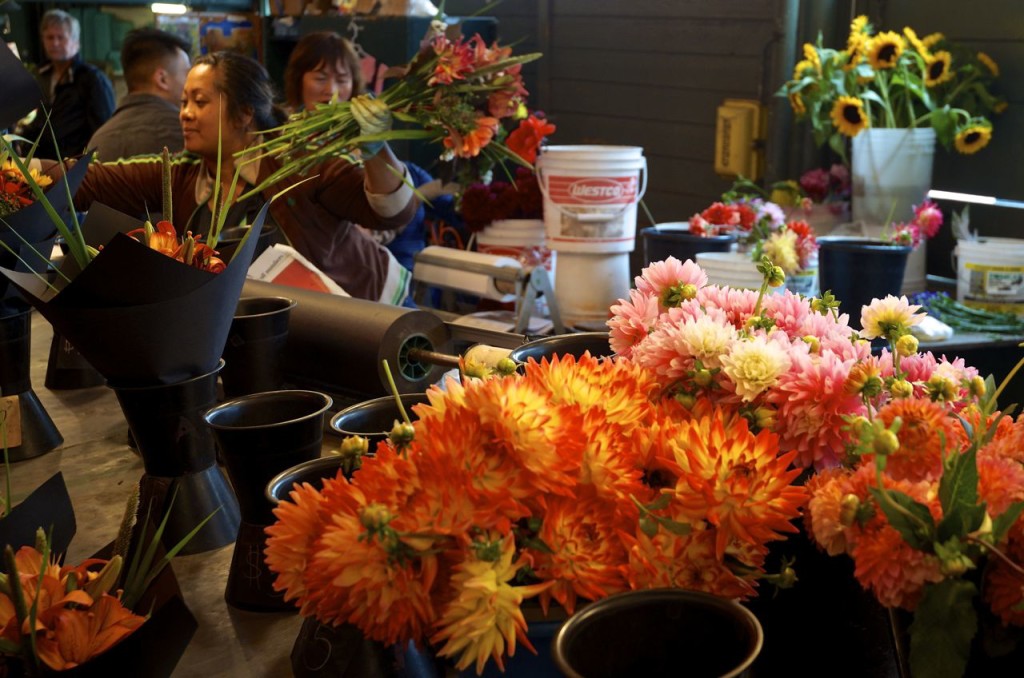 I particularly enjoy the flower stalls in the market. September is Dahlias season. These booms always bring back memories of my childhood. My mother loved these flowers. She grew a special variety of Dahlias with blossoms that grew to be the size of a dinner plate.

Here is an exerpt about my mother and her Dahlias taken from a nonfiction piece I wrote some years ago:

“From the backyard, my sister Jenny and I could see a dairy farm with black and white cows, a forest where we picked wild purple irises with bright yellow tongues, and the home of a quiet family Dad was always in a dispute with over the property line. In the backyard, we could enjoy Mom’s monster dahlias with blooms as big as supper plates.

Between our house and Mom’s dahlias, grew a giant flowering Japanese quince bush, a project Dad started from a twig. It exploded every spring with millions and millions of little purple flowers; off to one side of the backyard, strategically positioned like a sentinel, stood our outhouse.

In the farthest corner of the backyard, on the border of our land and the quiet neighbor, a maple thicket grew with long feathery branches that jutted out from four or five decomposing stumps. At one side of the thicket the branches parted, leaving an opening just big enough for Jenny and me to squeeze through.  Inside the thicket, the ground, soft and sunken like a huge bird nest, made a space sufficiently large for us to sit. Everything was exactly the right size. Jenny and I would sit in this thicket, a magical hideout of leaves, branches, and secrets.

From this hiding place, we spied on Mom as she hung the wash or picked the dead leaves from her dahlias. A thin woman, Mom always looked as though she carried a load equal to her own weight in her arms, either the laundry, one of our two younger sisters, or the bushels of vegetables she dragged in from the garden for canning. She worked like an ant, always dragging, lifting or pushing something.

The dahlias were a different matter. To tend them she would actually tiptoe into her garden. Jenny thought she did this to be quiet, but Mom said she did it to keep from packing down the soil. I saw Mom lift a blossom slowly once, cupping the giant flower in both hands, as though she was looking into a face.  She smiled, and I thought she intended to kiss the bloom. A couple of times I saw her talking to her flowers. Jenny didn’t see this, and said that Mom wouldn’t talk to flowers. My sister may have been right, Mom did not have time to spend talking to flowers. She hardly had time to talk to us girls.” 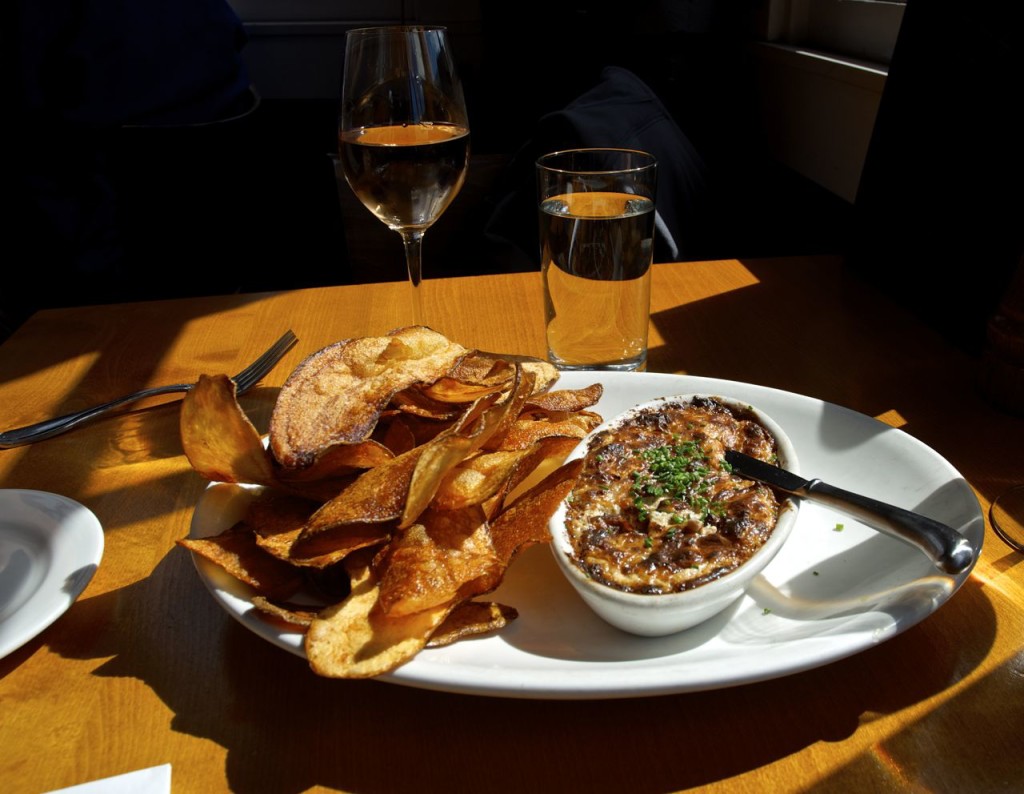 I stood watching the flower vendors for a while, then it was time for lunch. We had made reservations at Matt’s, a restaurant that overlooks the entrance to Pike’s Place. We started our meal with a fantastic ‘chips and dip’ that tasted out of this world; super crispy homemade potato chips with a bubbling hot, bacon-caramelized onion dip. Oh, yum. The sandwiches that we ordered were good, but nowhere as delicious as the appetizer. 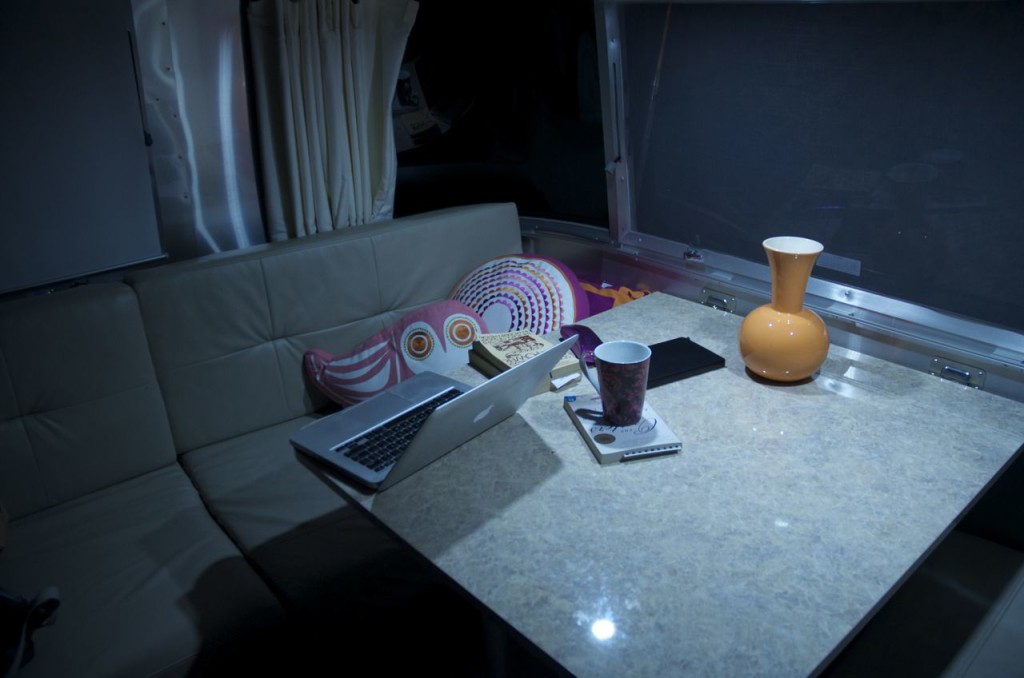 I enjoyed the late evenings in the Airstream. One night I tried to edit a short story, though without much success. The muse doesn’t always come calling during those hours, yet the quiet and dark made me hopeful that there might be a visitation.

David is also a photographer and with him as our tour guide we got to some of the secret spots that provide classic photos of the Seattle skyline. 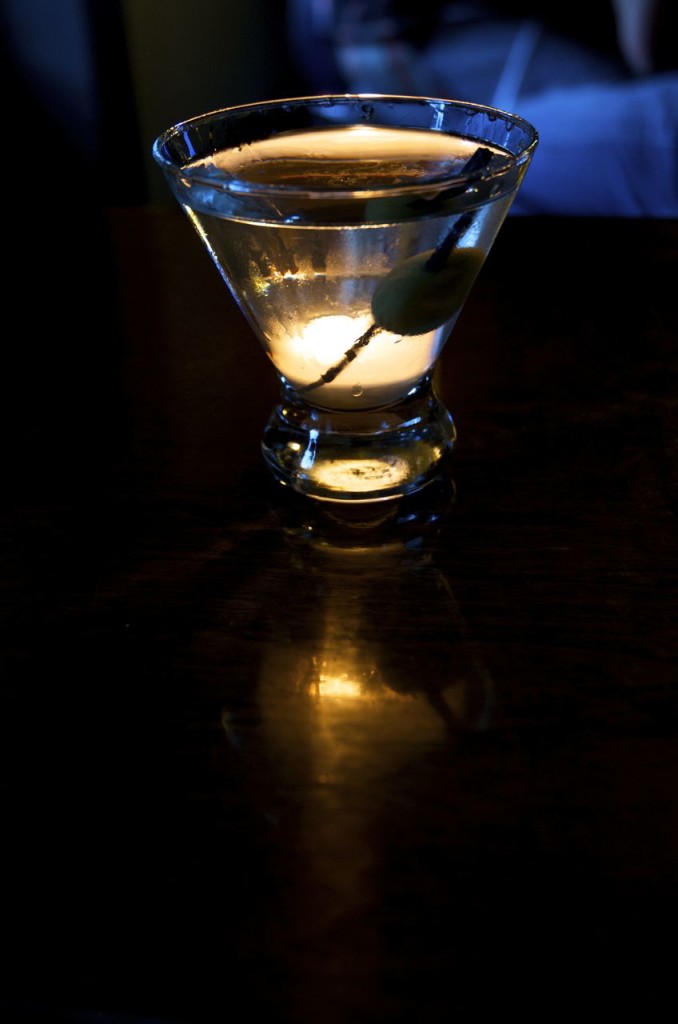 Ah, then it was sunset time again in Seattle and that meant it was time for another martini. I have to admit that I do like a martini with my burger. 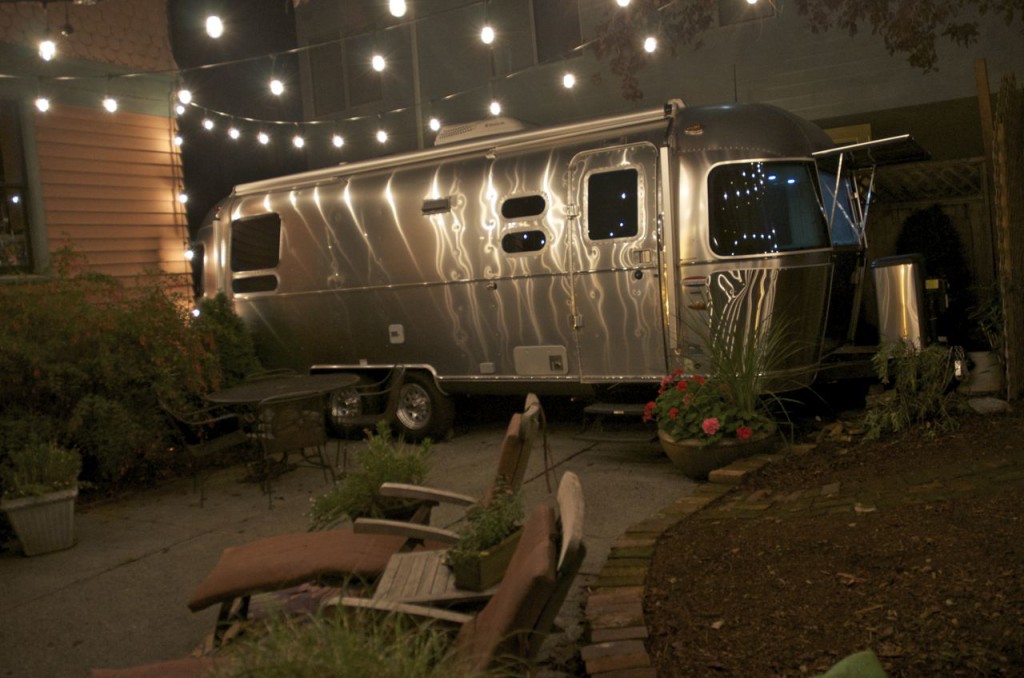 Every evening when we returned to our Airstream, it glowed and sparkled from the party lights that hung throughout the back yard. These lights were turned off at 11:30PM, a sign that the party was over, but by then we were tucked snug in our comfortable feather stuffed queen sized bed. 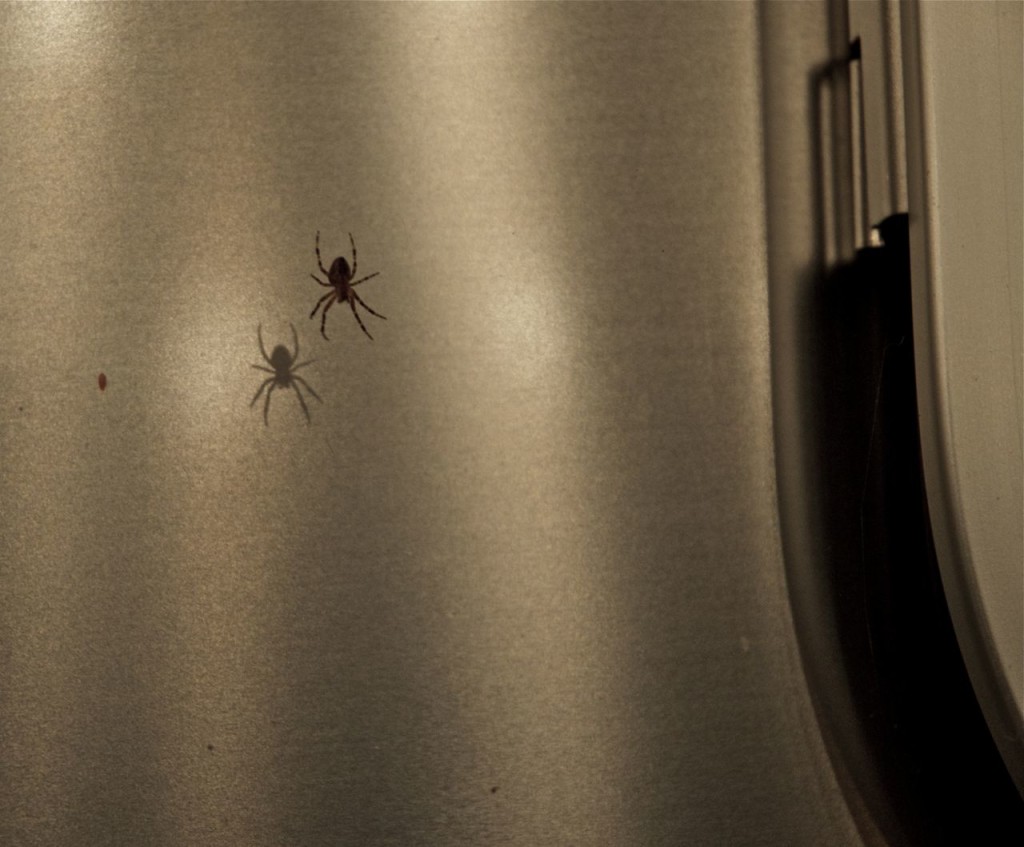 One night a very big spider dangling just outside the front door greeted us. The spider and its shadow wiggled in the slight breeze. I closed the door quickly, least it considered crawling inside to keep us company.

When I was very young, I remember encountering my first large northwest garden spider. It was curled up inside a huge purple poppy in my grandmother’s garden. I stuck my nose into the flower wondering if this pretty flower smelled like a rose. The spider, disturbed in its hiding place, shifted to one side of the poppy. I never considered that I might have frightened the spider. I dropped the flower. The spider fell out of the poppy, scurried away, disappearing in the tangle of other flowers in grandma’s garden. For years after that I remained cautious when smelling flowers, and I’m quite sure it has something to do with this childhood encounter, though I never feel comfortable around spiders. 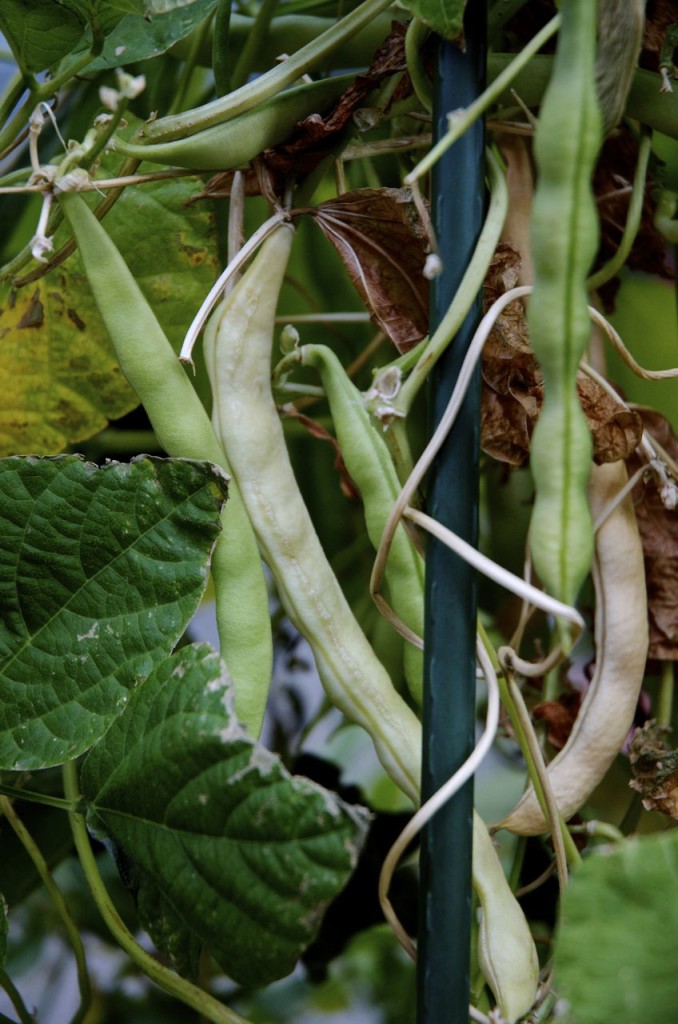 Nostalgia has an interesting way of wrapping around common items, then projecting long forgotten memories across the psyche. That’s what happened when I walked passed Nadine’s small vegetable garden with its clusters of cherry tomatoes hanging from the vines and handfuls of long green beans ready for the picking.

It was the beans that brought back memories from my young adulthood. Every year, close to the end of summer my sister and I, along with dozens and dozens of our peers, would hire on with the local bean farmers to help harvest their crops. Many small farmers, like the ones I used to work for, have since sold their land to developers or agribusinesses. I hadn’t thought about picking beans in years, yet I remembered, as though it was yesterday, walking down the long steamy rows, the vines often growing a foot or two above my head. There was a smell of green everywhere, a smell that I could never explain to anyone. I’d grab handfuls of beans, sometime slimy with aphids, sometimes covered with the goo of a banana slug. But this was the way that I earned money to buy my school clothes.

Several times as I walked passed Nadine’s small vegetable garden I had to restrain myself from pulling a handful of beans from the bush. 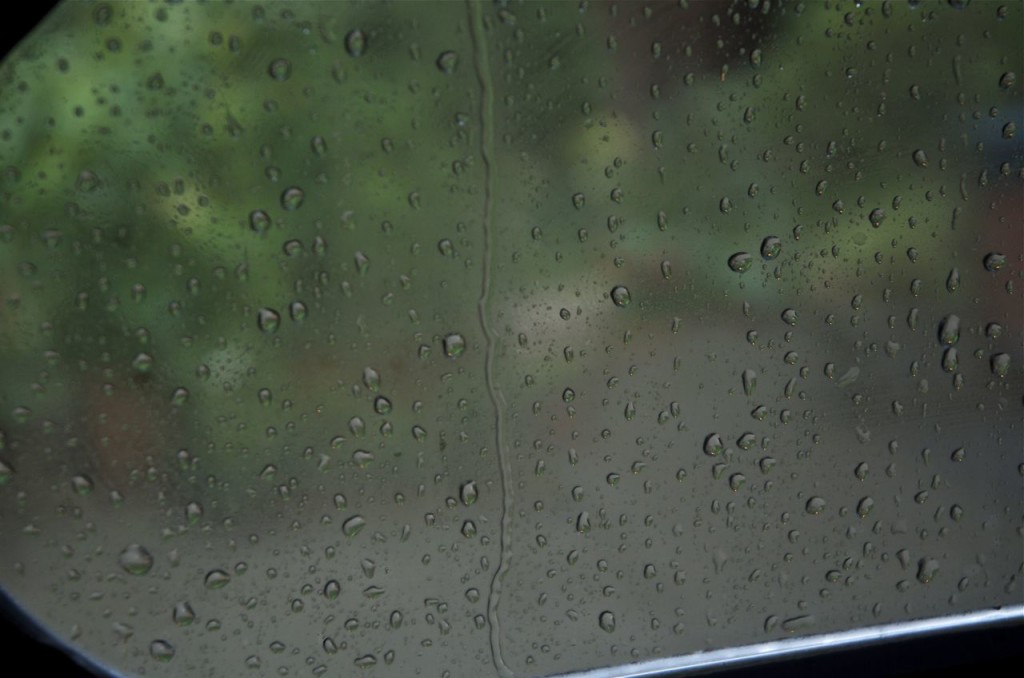 Some of these memories lingered after we returned to NYC. There was plenty to do once we got home. We had a date to babysit the grandkids in Brooklyn. There was a dentist’s appointment to keep. A mammogram scheduled that had been long over due. There was also a blog post to write about Seattle. Yet, when I began to write, my words came out like a lazy travelogue; we saw this, then we went here.

That’s not what I came away with. I had traveled back from a place that I thought I knew, though I found it was a place that had drastically changed. That’s what hit me. It was seeing my son who has now made the northwest his own; my sister who returned to Washington years ago and now lives there comfortably with all the development that has totally changed the area that I once knew. It wasn’t seeing the Dahlias, or the spider hanging outside our Airstream door, or the green beans growing in the little backyard garden. It was none of these things. Yet it was all of them because it all lives in my mind, memories of what used to be.

On our last day it rained. It was a torrential downpour with major thunder and lightening. The rain cascaded down the streets, clogging the sewers. I remember these kinds of rainstorms when I was a kid living in the NW. I sat in the Airstream listening to the rain, watching the huge rivulets of water run down the windowpanes remembering all the days when my sister and I mournfully looked out the window waiting and waiting for the rain to stop. Though it was not so wonderful to experience as a child, as an adult comfortably ensconced in our Airstream accommodations I found it a delicious memory.

20 comments for “VISITING THE WEST COAST”