It was a dreary day. The weatherman said it would rain. But luckily it was only a steady drizzle when we set out on our rock hunting adventure. Snug in heavy rain gear and hiking boots we were ready for our rockhound excursion into the Blue Mountains, an area that is part of the high desert country in eastern Oregon. 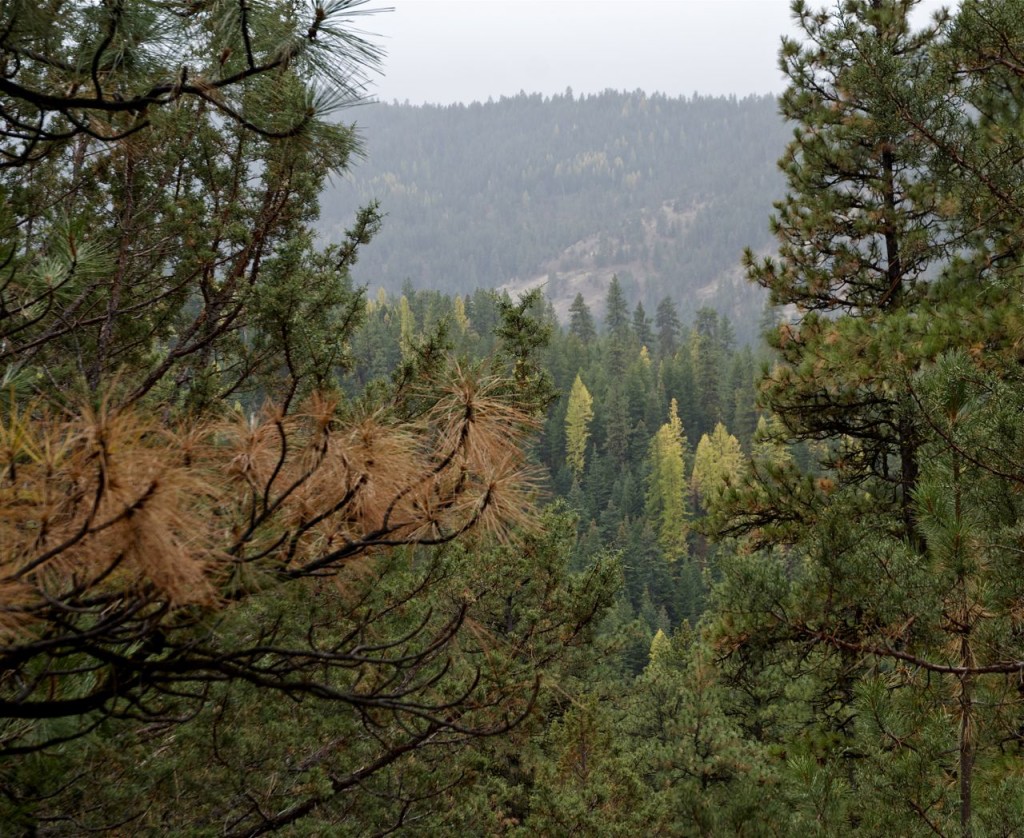 I have three sisters. Our lives have scattered us hither and yon. It had been six years since the last time we’d all been together. This fall we decided to meet up in eastern Oregon where one sister lives. Initially we’d planned to do some jewelry making. One sister paints and she said she’d teach us some of the techniques she’s learned. We were all going to bring some kind of project to share. Though there is so much to see in this part of Oregon, we knew there would also be a few excursions. Our parents were amateur rockhounds and two of my sisters continue to consistently scan the earth for pretty rocks. So, off we went up into the mountains to scour the forest floor for special rocks. 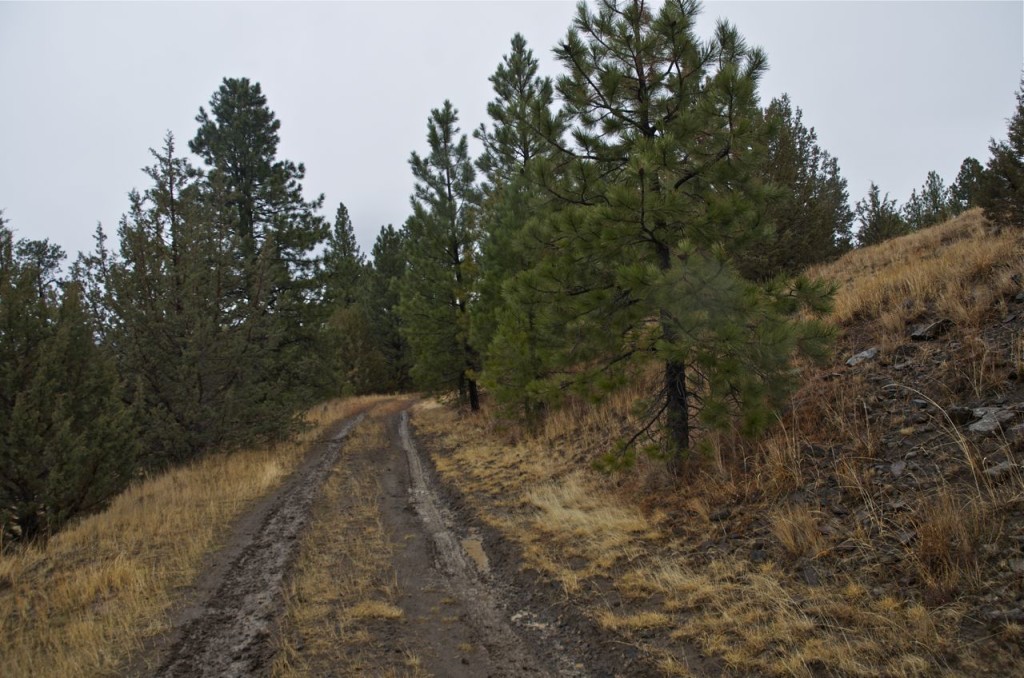 We all climbed into my brother-in-law’s heavy duty vehicle and headed out of town. We talked and reacquainted our selves with each other as we traveled along the country roads. We are all retired, though one sister has a part time job. There were grandkids to talk about, aches, pains and other changes that we were all experiencing. We continued to talk and giggle as we drove along a twisting tangle of turnoffs. Then after half an hour we headed up a steep incline and drove onto a deeply rutted country dirt road. A heavy rain began to fall. The road turned muddy and slippery. From time to time the vehicle skirted close to the edge of a very steep canyon. No one was chatting any longer, but we giggled and called out as though we were on a carnival ride while the vehicle jostled from side to side on the rutted road. The trees became more sparse the higher we went and an expanse of openness spread in front of us. At times it felt as though we had reached the top of the world because all we could see were the tops of other mountains in the distance. 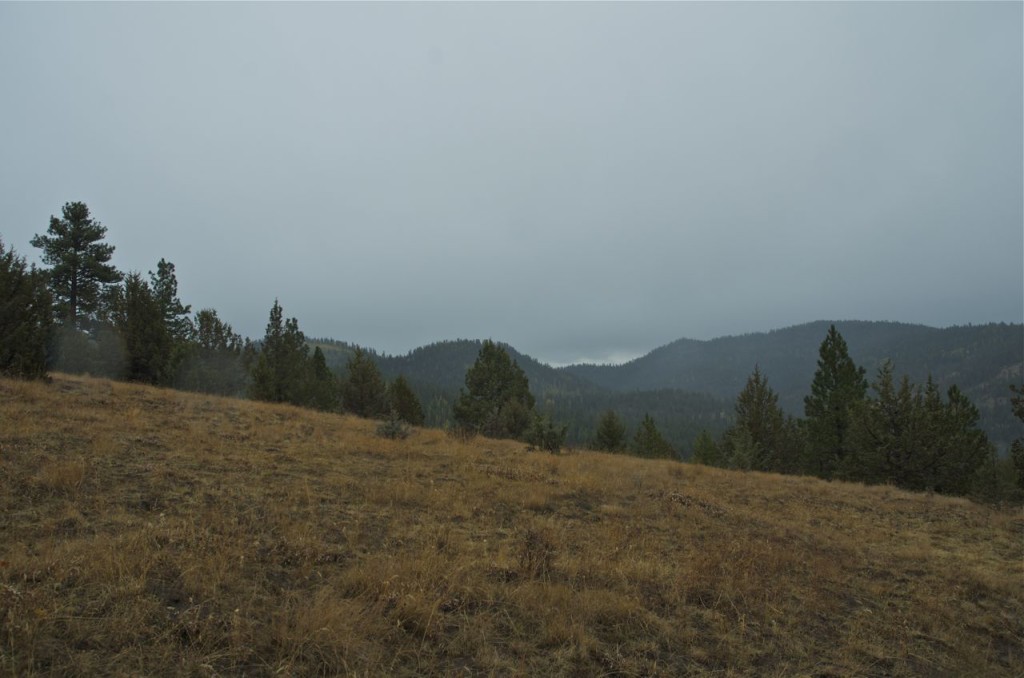 Finally we reached what my brother-in-law called ‘the spot’.  He and my sister have been here many times before and they knew the area well. We got out of the truck. I have to admit that I was relieved when I felt solid ground beneath my feet. And though we were most likely not at the highest peak, we were still a good 4,000 feet, or more, above sea level. I took a deep breath. The air was rich with damp earthy smells. A slight wind blew across the brittle, dead grassy field. It wasn’t really raining but there was a dense chilly spray descending on us and I imagined that this was how it felt to be standing in the middle of a cloud. The only sound we heard was the shushing of the breeze gently rustling through the millions of trees that surrounded us. It was so quiet that I could have believed that my sisters and I were now totally alone on this planet. 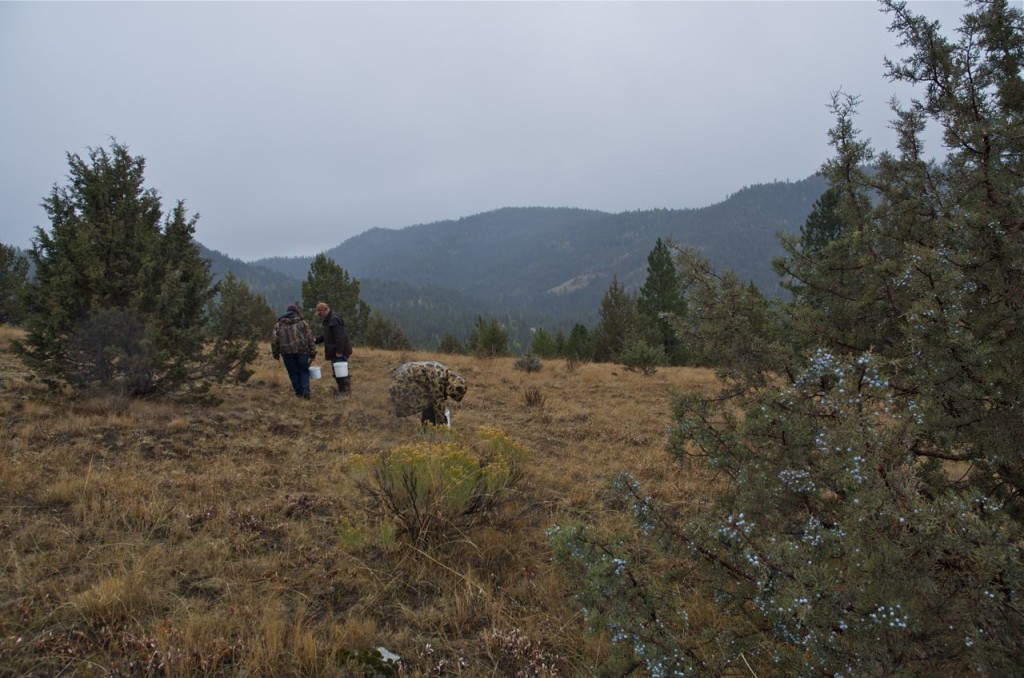 We were each handed a bucked and then we climbed even higher. There were rocks everywhere. Though it was hard to tell what they were because everything was coated in a thick gooey clay like mud. For more than sixty million years, eastern Oregon has been a land of volcanism, mountain building and erosion. Lava flows of fluid basalt formed this area spewing deposits of obsidian, agates of all sorts, and hundreds of other semiprecious stones, scattering them for miles and miles across the landscape.

It was fun to be with my sisters again. We talked for a while, then we each settled into a quiet, perhaps meditative ramble along the rocky earth. Having lived in the city for so many years, I’m not used to walking in this kind of wilderness any more. One sister an avid rockhound still moved about this landscape like a small mountain goat. We helped each other over rocky outcrops and called out when we found a ‘good spot’. It was a little bit like sliding back into a time when we were kids, playing, or searching for pretty rocks. Nothing had changed at that moment, yet everything was different.

We gathered rocks, digging through the mud to extract them from the sticky earth. Walking along the hilly terrain we knew we were not alone. There were foot prints of what could have been cougar. There were elk, deer tracks and what looked like the imprint of a bear paw in one muddy spot. There was plenty of wildlife in the area and I suppose that next week when deer hunting season opened, this would not be a good place to be strolling along the hills looking for agates. 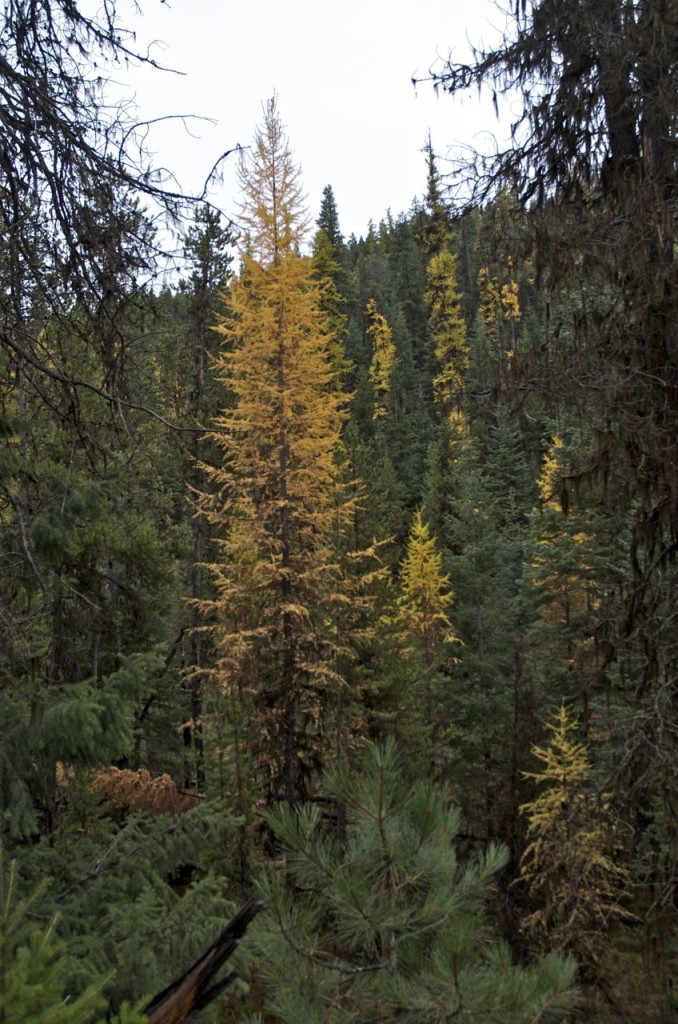 Several hours later, damp as damp can get, clomping along the hillsides with thick treads of mud on our boots, we decided to call it quits and head home. A heavy rain had begun to fall and with the temperature dropping, it felt like it might begin to snow at any moment. The drive back down the hillside was easier. Perhaps I’d become used to the deep, slushy gullies we had to drive through on the way up the mountain. And now traveling so close to the edge of canyons seemed more beautiful than dangerous.

The Tamarack trees, changing color in the fall season, dotted the evergreen forest, glowing like rays of sunshine in the mist. These trees are a type of pine that losses it’s needles when the weather turns cold. In another week they will stand bare, appearing to be dead as they go dormant through the freezing winter.

On the ride home we watched as a shroud of clouds, rain and snow began covering the surrounding mountains. A chilly view. A beautiful view. 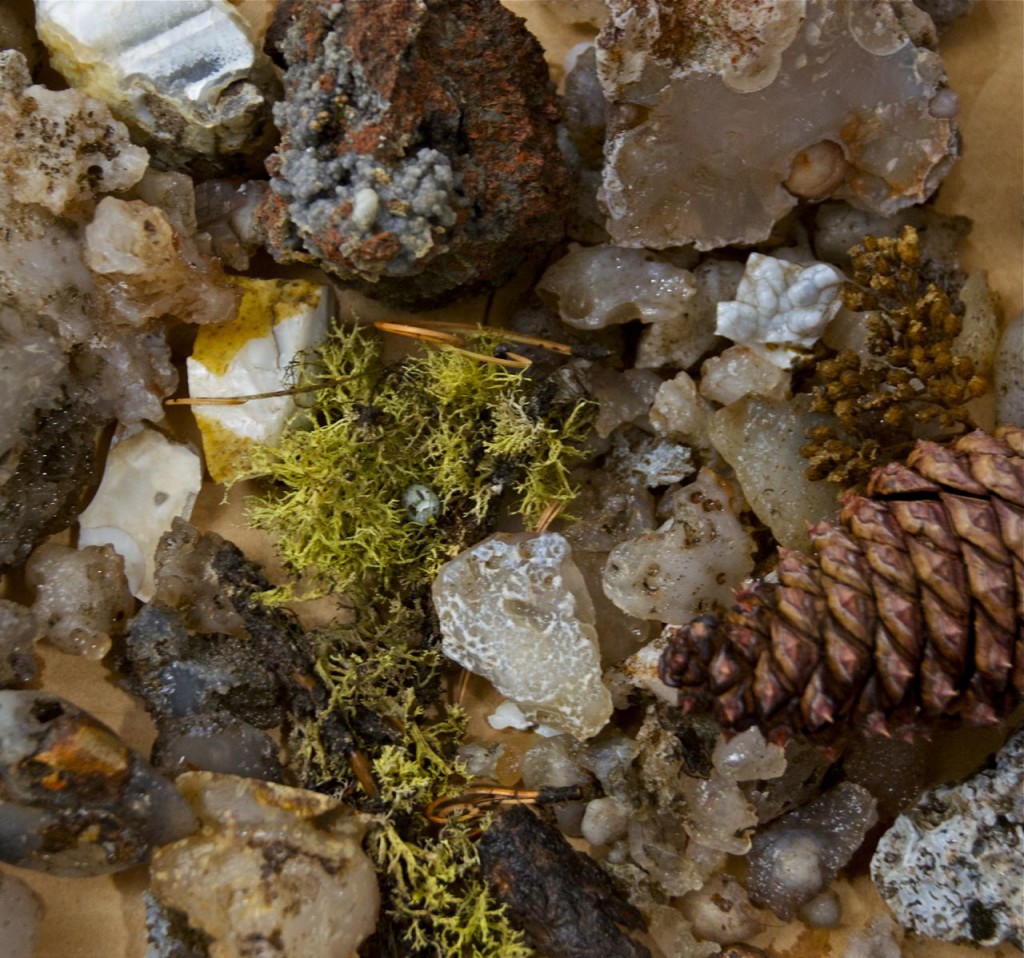 Arriving home, the task now was to wash and scrub the mud from our gatherings. I am not knowledgable about the names of rocks. Though from a book on local rocks one of my sisters brought with her, it looked like I had gathered angel wing agate, botryoidal agate, white plume and a collection of small plain white nodules. There was also some fresh bright green moss and a fat pinecone. Not a bad haul. My sisters and I compared our rocks, humming with delight as the washed treasures, still wet from the scrubbing, glistened in the overhead light in the kitchen. We shared, as we always had in the pleasure of looking at each other’s bounty.

24 comments for “ROCK HUNTING IN THE BLUE MOUNTAINS OF OREGON”