There’s no end to the adventures, big and small, now that I’m living in the big city. One of the unexpected delights has been sitting on our terrace in the quiet early morning hours looking out at the tall buildings across the way, watching the streets with hardly anyone around except for a few dog walkers, the light from the sun rising slowly, filtering across our eastern view. Even this summer on the most humid days the mornings are lovely up high on our terrace, with a cup of fresh brewed coffee, a gentle breeze brushing away the sleepy cobwebs from my brain. 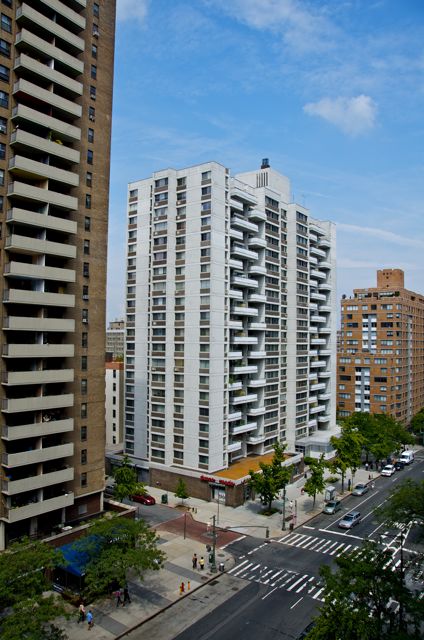 As I look out at the terraces across the way I’ve begun to see that these little oases have personalities; some manicured, well kept, tidy respites, while others are simply used for storage. There are a couple of terraces with so many potted plants it looks like there’s hardly any room for sitting. One terrace has the no-fuss garden with brightly colored plastic flowers stuck in terracotta pots. 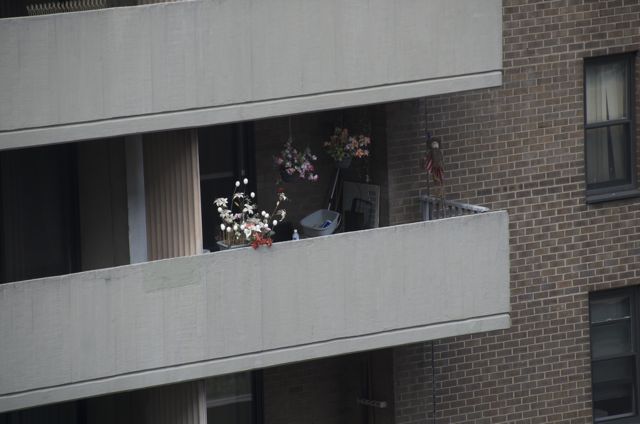 The other day I saw glistening bubbles floating out from a neighboring terrace. At first I thought my eyes were playing tricks on me. Then when I looked more closely I saw a woman standing behind one of her large potted plants blowing bubbles out into the huge city. Perhaps some of the bubbles reached the street below but then I don’t know what her intentions were. It may have been her personal pleasure at seeing the bubbles floating about in the chaos and noise of the busy city.

One couple eats dinner on their terrace a couple of times during the week. A candle glows on the table, they each bring their plates outside and spend a couple of hours eating under hanging plants, a private grotto.

We don’t live so far up that we cannot discern people walking on the street below us. There is for example, one man who walks a very old, tired looking black shaggy dog. The man frequently sits in the bench at the bus stop; his dog stretched out at his feet like a fat black rug. People sit next to the man and pet the dog while they wait for the bus. The man never gets on a bus but sits waiting for the next person who will come along, sit next to him and pet his dog.

The most unusual and crazy sight we’ve seen so far happened early last Sunday morning. My husband spotted him first; a man double-parking his pick-up truck, the kind with an enclosed back end.  The man quickly jumped out of the truck, a large butterfly net in hand. He disappeared around the corner of the building. He was gone for less than a minute and when he returned to his truck he was carrying a live pigeon in his free hand. He wasted no time throwing the flopping bird into the back compartment of his truck.

The man then crossed the street, net in hand and headed straight for a flock of pigeons resting in a stream of morning sunshine on the sidewalk. We watched the man snatched up one and then two birds with his net. These helpless creatures also ended up in the back of his truck before he climbed into the driver’s seat and sped away.

Later that morning I googled ‘pigeon stealing’ and found tons of postings about gangs that ride through the city snatching pigeons, which by the way is against the law. Some of these birds end up on menus posing as squab; others become target practice for hunters on game farms. There are an unfortunate number of these pigeons used by unsavory characters involved in training fighting dogs. 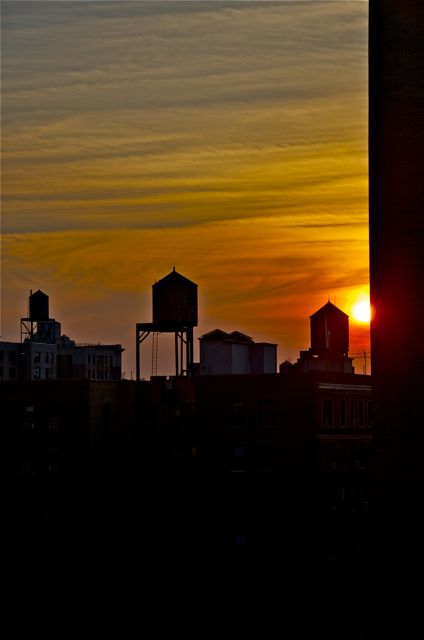 Every day offers something new and exciting. And even when the day is finished we are not done with the treasures we find in our new place. Though we don’t get a full view of the sunset from our terrace, we we see enough of the sky to make every evening a beautiful spectacle.

← NO PROBLEM
SUMMER IS COMING TO AN END →

10 comments for “TALES FROM THE TERRACE”