We spent a wonderful weekend on the Rockaway Peninsula a couple weeks ago. We dined, played, rested and visited with a dear old friend. But when Sunday afternoon rolled around, it was time to head back home, to Manhattan. Instead of taking the subway into the city we decided to take the Rockaway Ferry. It would be a couple more dollars than if we’d taken the subway, and maybe it would take a bit longer, but it would certainly be more pleasant than being closed up on the train after all the fresh air we’d just experienced. 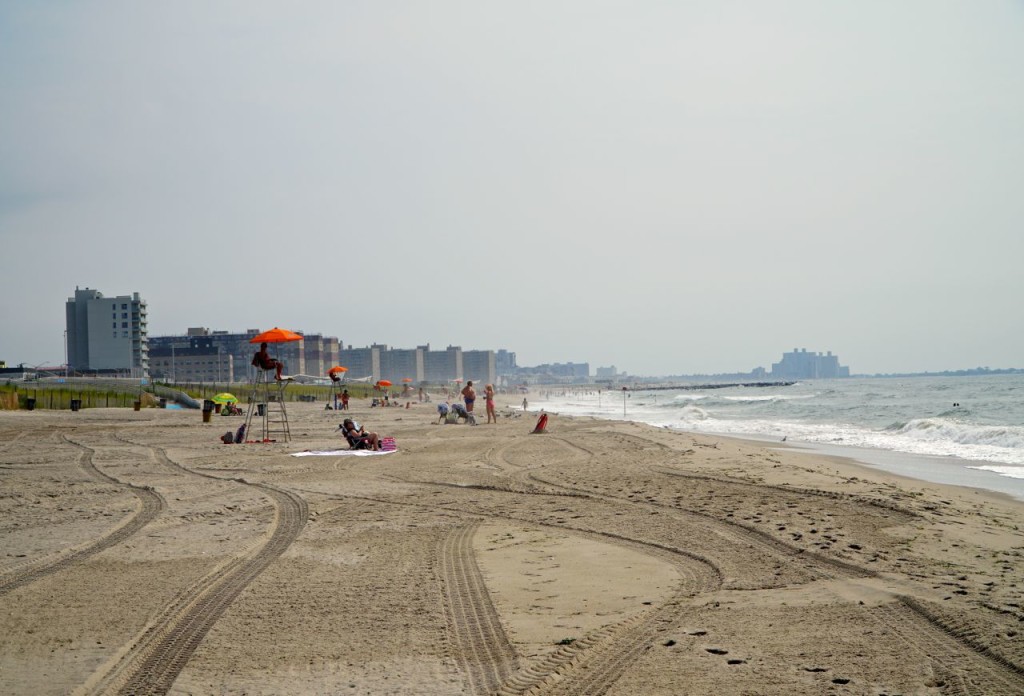 We took one last walk on the beach. There had been a heavy downpour earlier and we were awakened in the wee-hours of the morning by rain splatting against the windows and the slight moaning of a squall out in the ocean. The wind was still kicking up waves on the shoreline as we took in a few extra lungs-full of the sea air. Even in the early misty morning there were clusters of intrepid sunbathers stretched out on the beach waiting for the clouds to clear and for the summer day to begin. The weather forecast promised intermittent sun, high temperatures and a great deal of humidity. But our visit had come to an end and it was time to go home.

The Rockaway Ferry dock is in Jamaica Bay and we clambered aboard the boat with a hundred other people. Some of our traveling companions were deeply tanned beach goers heading back to the city. There were tourists. There were families with small children in strollers. 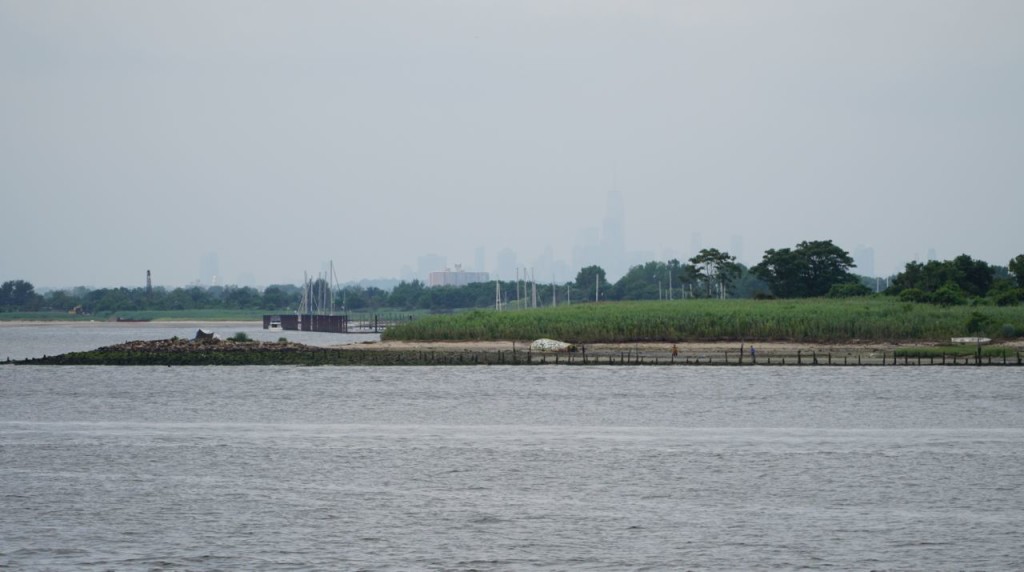 The ferry was a quickly moving vessel, and as we scooted along the shoreline, I recognized Dead Horse Bay, a cove I’d visited a couple years ago. It has a fascinating history. I wrote a blog post about that visit. Here is a link to the blog if you are interested in learning more about this place. 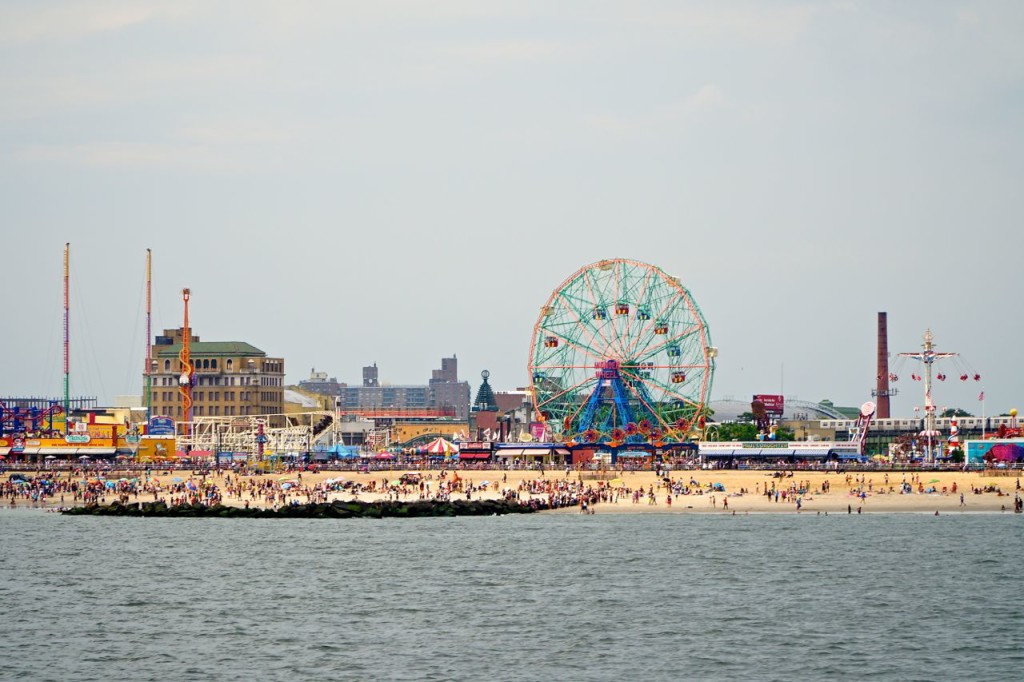 It didn’t take long before we were traveling passed Brighton Beach and Coney Island. The Wonder Wheel is a really cool ride, if you are not afraid of heights. On most days, you can see the Manhattan skyline when you get to the top of this giant Farris wheel. The Coney Island boardwalk is filled with games. There are rides for the very young and lots of challenging activities for the intrepid mature person. And there is lots of fried food. The area around the boardwalk is maybe a little seedy, but let’s just say that it has tons of character. In July the Famous Nathan’s Hot Dog Eating Competition takes place. The most recent winner I heard was a Japanese man who travels here from Asia to compete in this eating challenge. He is a professional competitive eater and this eating festivity on Coney Island attracts both the novice and the professional. On New Year’s Day the Polar Bear Club has it’s annual winter dip in the Atlantic off the Coney Island boardwalk. It is a lot of fun to watch and though I’ve had a few friends who’ve taken the plunge, I’ve never had any inclination to participate. I did a blog post about one of my trips on New Year’s Day to Coney Island. Here is a link to that blog if you are curious about what happens.

Brighton Beach is on the eastern end of this sandy shoreline. It is home to the largest Russian-speaking population outside of the former USSR. They do not have rides and games along the boardwalk, but they have other treats. They have food, lots of food. They have dumpling shops. They have huge catering halls for elaborate celebrations. They have stores with nothing but dried fruit, nuts and authentic candy from the Mother Country. And it is probably the only area in the five boroughs where you can get a Sish-kebab with a shot of vodka. 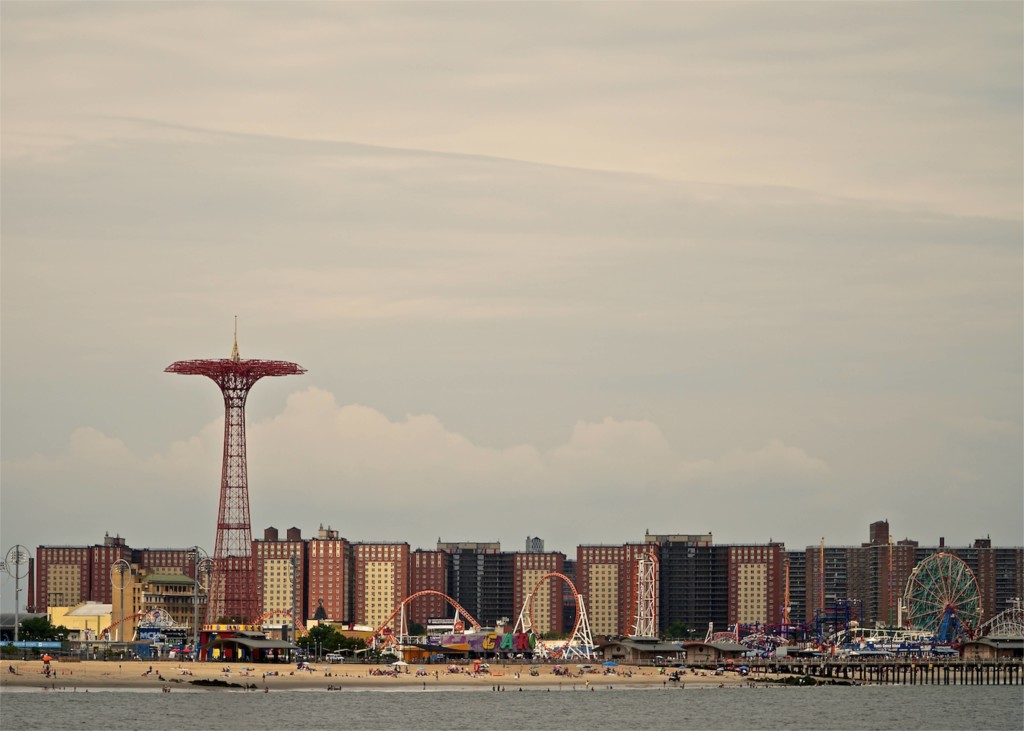 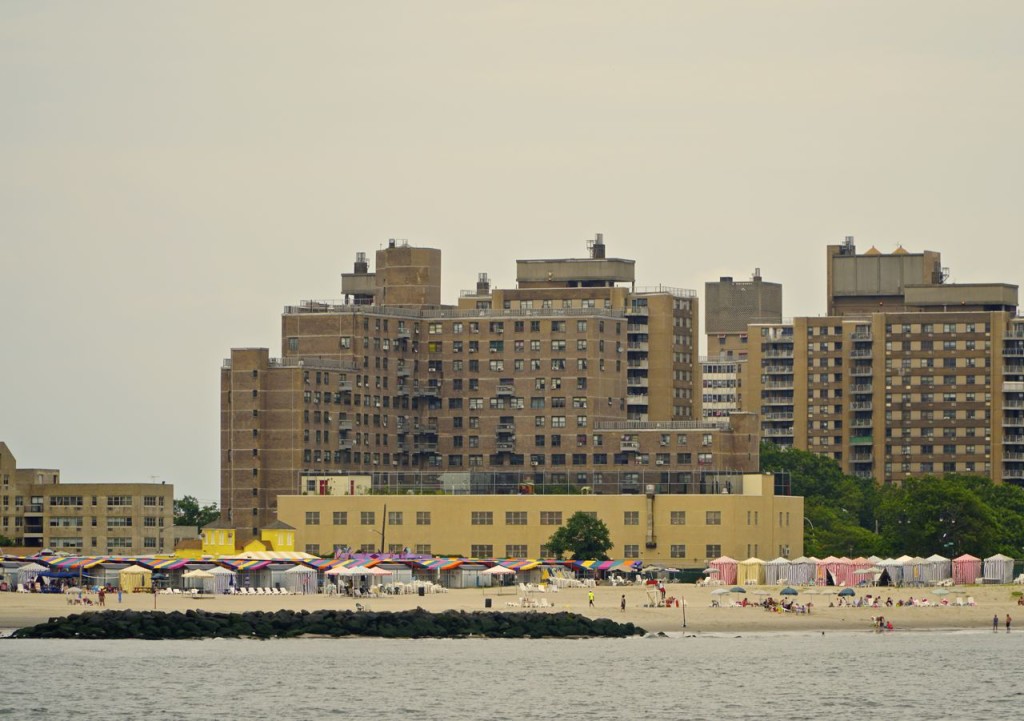 Though it was refreshing to be in the open air with the coolness of the breeze from the fast moving ferry, it was still a hot day. A hazy sun beat down on us, and the bathers at the private Sea Gate Beach and Cabana Club looked to be so relaxed and very purposefully enjoying their Sunday at the water’s edge. I had heard about this cabana club, but had no idea where it was or how much of the beach it covered. But at almost $6,000 to rent a beach cabana for the season, not just anyone gets to play on this beach. I guess that’s what private means. 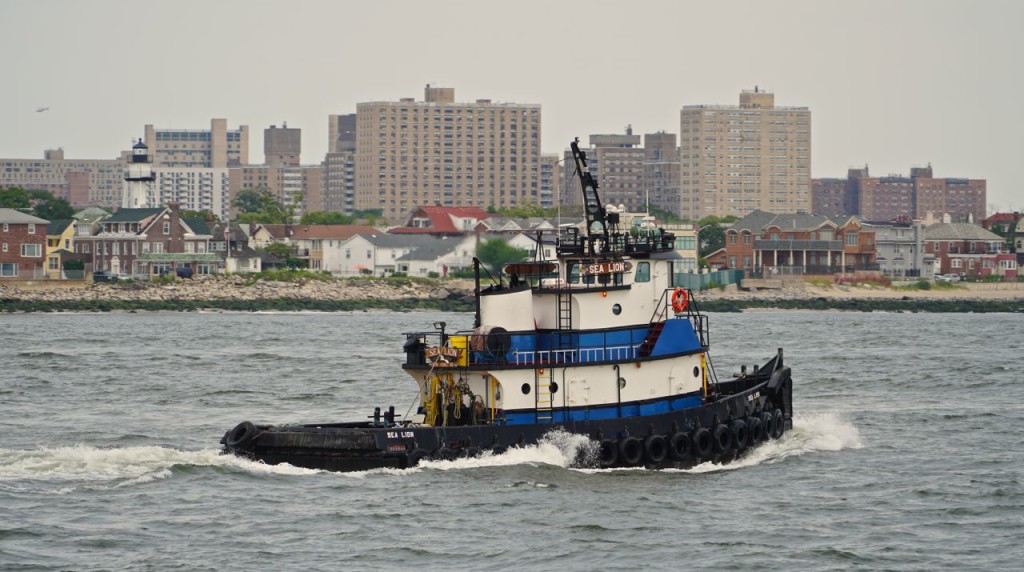 This tugboat reminded me that these are working waters are not just an area for water sports and sunbathing. This boat was headed out to sea and most likely going to be one of the hard working vessels that escorts and assist the barges that bring goods into the New York Harbor.

This is something that I never knew existed in these waters, a light house. It’s on the shoreline, but smack-dab in the middle of the Sea Gate community at the western end of Coney Island. It was constructed in 1890 and has been in operation since then. Now it is automated, but back in the day, it was operated by a lighthouse keeper. 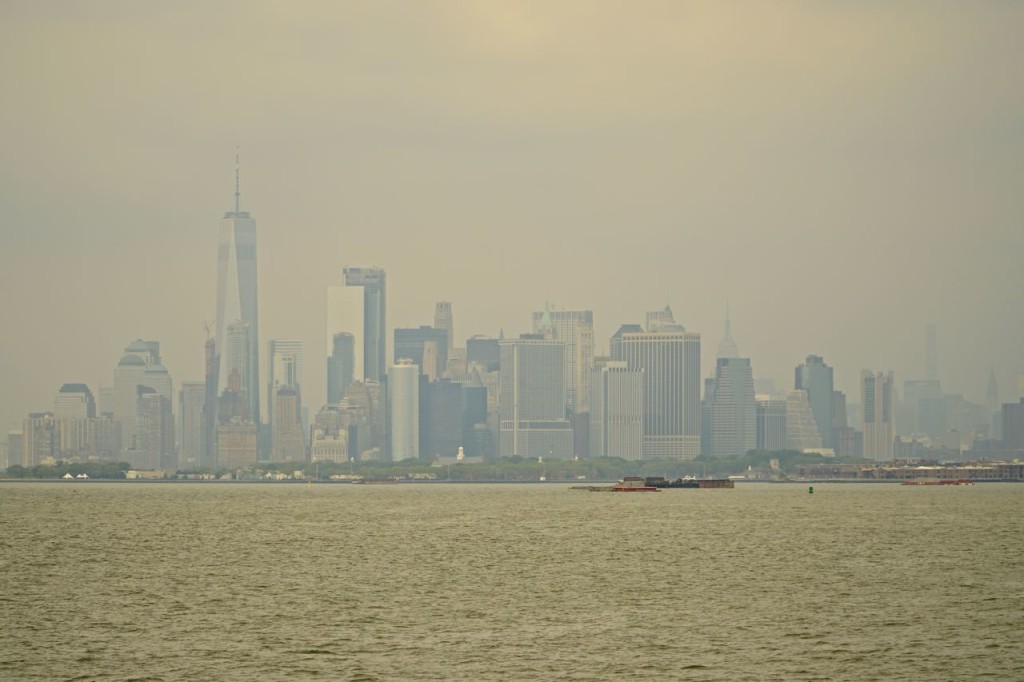 Manhattan came into view, dream-like in the thick summer haze, as we rounded the Brooklyn Navy Yards. That grassy area along the bottom edge of the city is Governor’s Island. It is made up of 172 acres with 22 acres now a Governor’s Island National Monument with the remaining acreage overseen by the Trust For Governor’s Island. There is a venue for activities for all ages throughout the year. 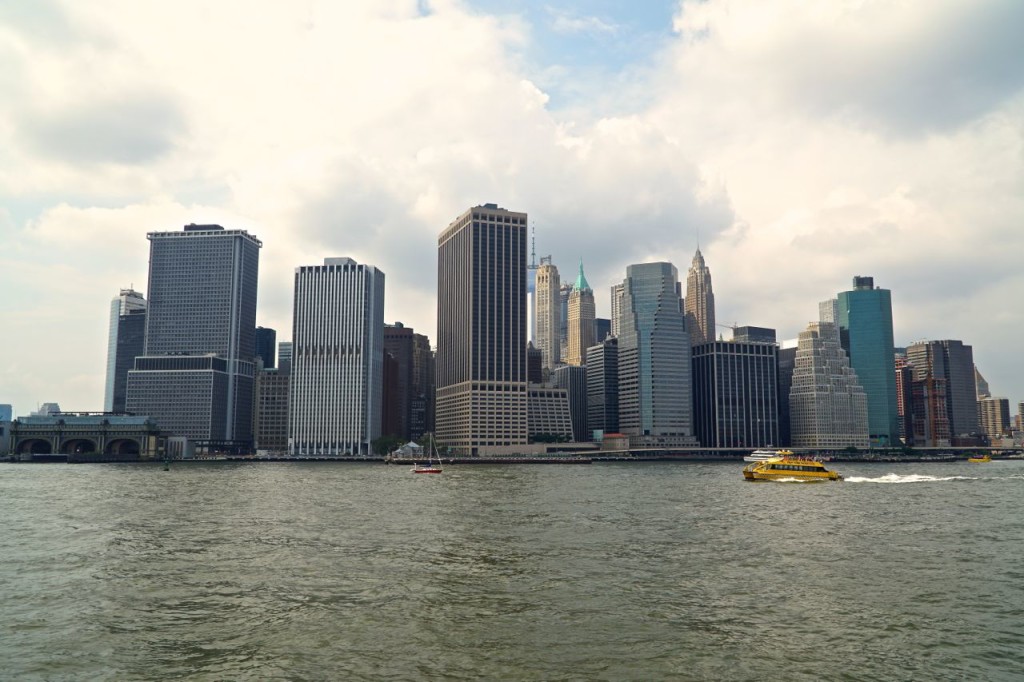 Then as we got closer to the city, buildings glittering with glass and steal, appeared to be an impenetrable fortress. The clouds had begun to part. The water, a brackish mix of the Atlantic and the Hudson and East River, turned a pewter color as the waves churned up the muddy bottom. An increasing breeze whipped our garments, a shrill wind whistled across the ferry’s wheelhouse, making me wonder if another storm was heading our way. 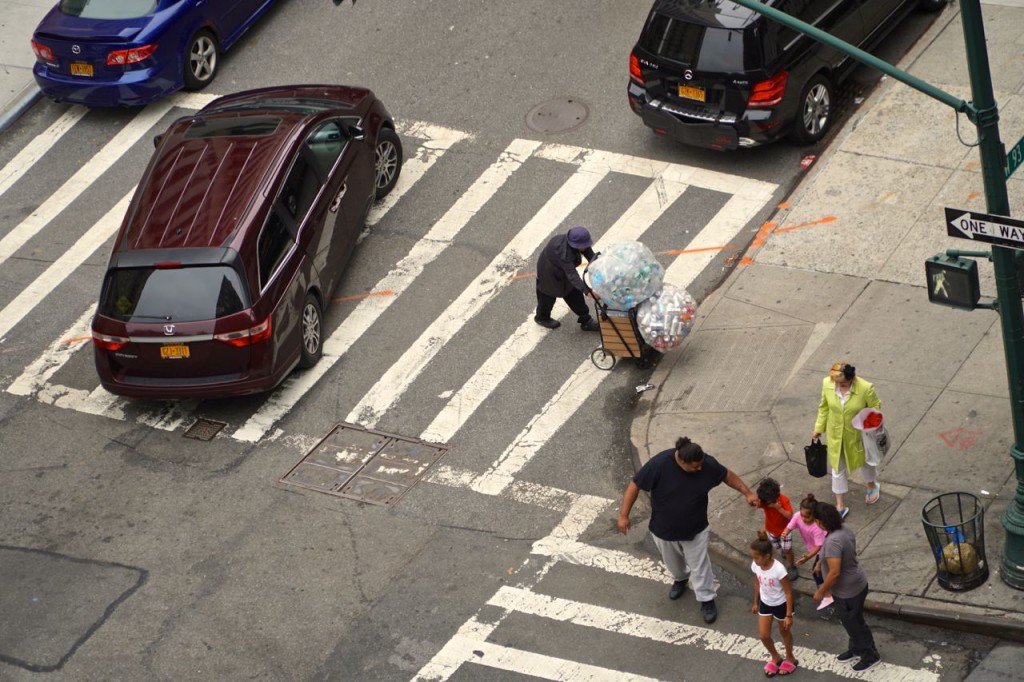 It took us a while to get home from where the ferry docked. It was a lovely weekend, and a great boat ride. In the evening when I looked out my window, there was no sand. No lapping ocean waves slapping against the shore, just people doing their thing on the concrete avenues.

← PUSHING WATER IS NOW AVAILABLE IN PAPERBACK
VIEWS OF AMSTERDAM →

2 comments for “A FERRY RIDE HOME”