The Coney Island Polar Bear Club was founded in 1903 and every New Year’s Day they sponsor a Polar Bear Plunge off the beach and into the Atlantic Ocean. It’s become a big deal in New York City with several hundred people taking the plunge while thousand of onlookers stand around to vicariously enjoy the chilly experience. 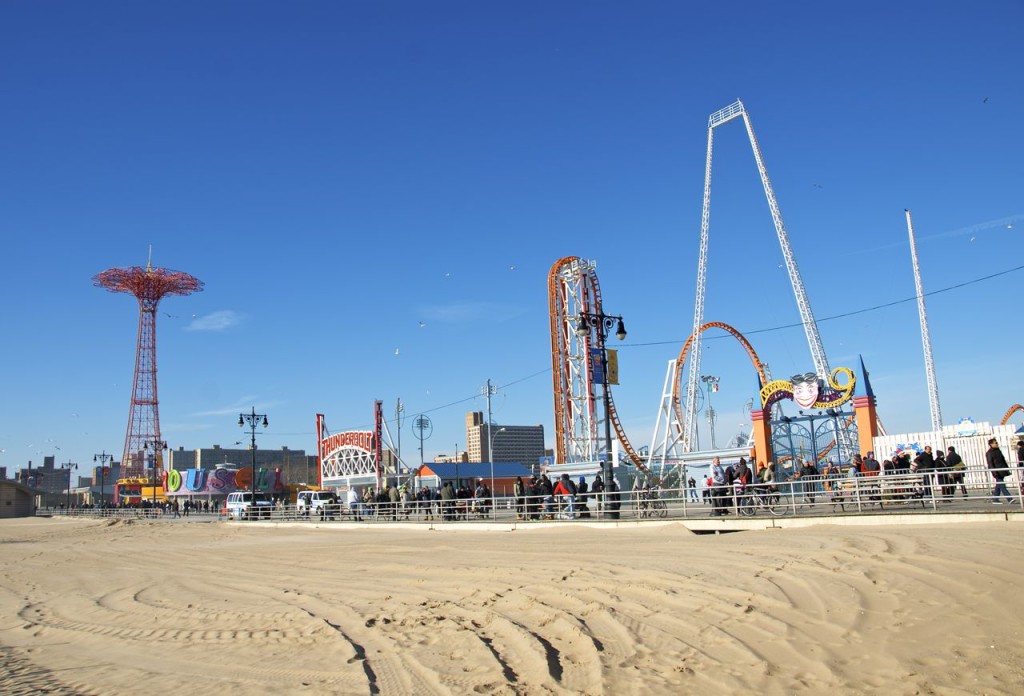 The Coney Island Polar Bear Club was founded by Bermarr Macfadden, known back then as the “Father of Physical Culture.”  According to the Polar Bear’s website he had a pretty influential following which included FDR, Will Rogers, Shirley Temple, Clark Gable and Rudolph Valentino. The idea behind a winter dip in the Atlantic was to give an individual a “boon to one’s stamina, virility and immunity.” 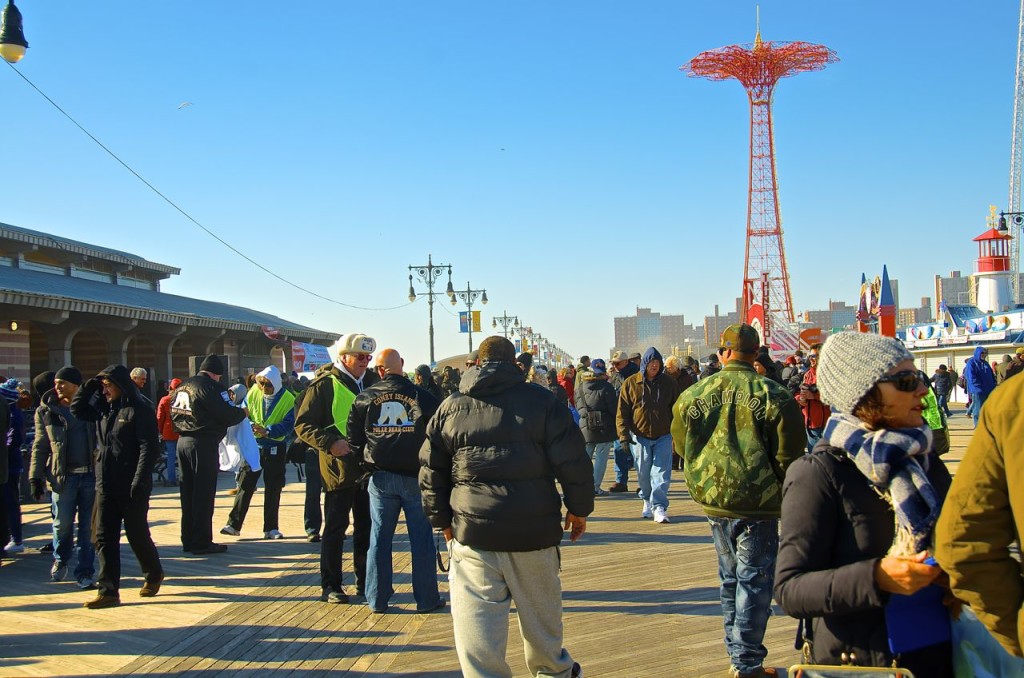 I wasn’t in the mood to jump into the Atlantic on New Year’s Day, but I was curious about what the hoopla was all about. So I hopped on the D train and headed for Coney Island. I got there a couple hours before the big plunge and the boardwalk was filled with potential swimmers, curious seekers and lots of excitement. 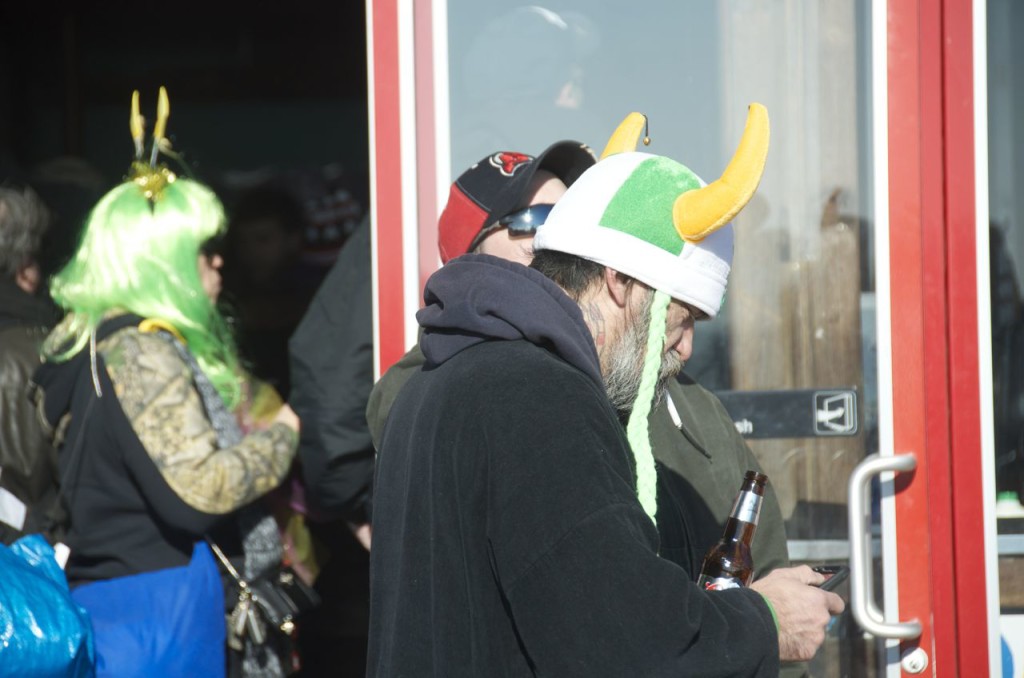 The festivities certainly included Coney Island fare: hotdogs, pizza and beer. And what better way to drink your beer on a cold New Year’s day than with a festive headdress. 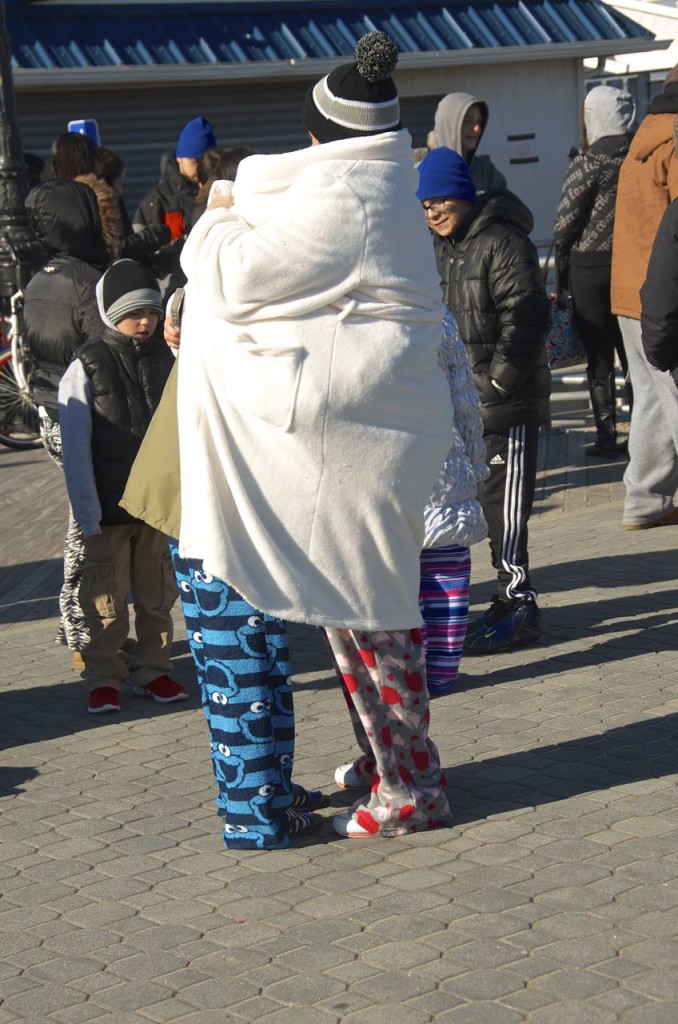 These people were huddling before they took the big plunges. Though they unfurled long enough to have their photo taken by a friend who was excited to document this big day. 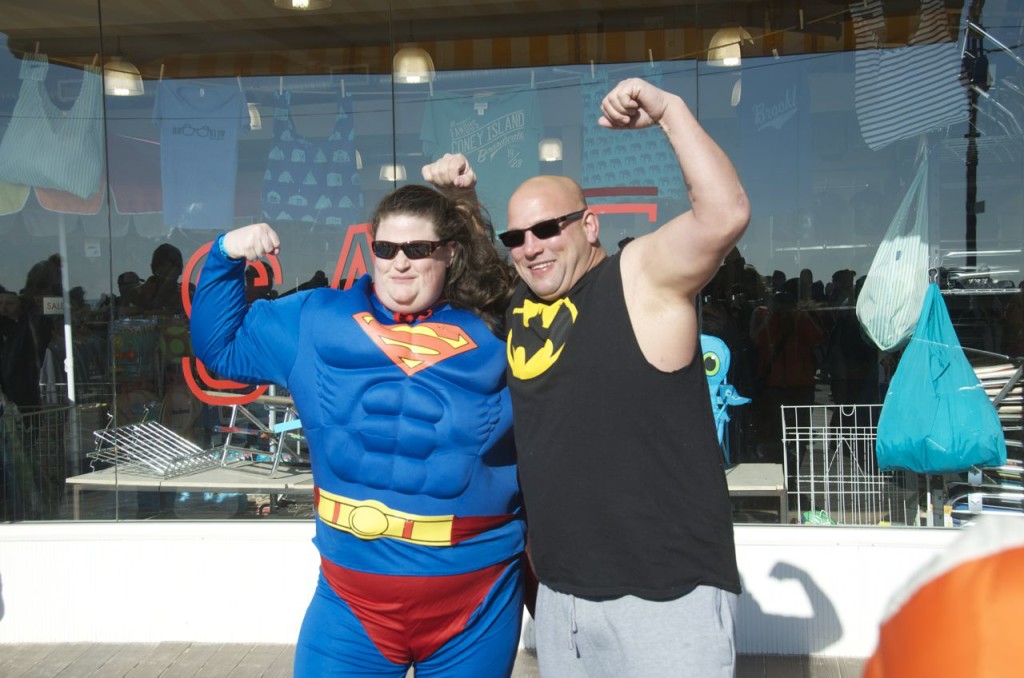 What would Coney Island be like without a few Super Heroes!! These two posed outside a tourist shop for a gaggle of photographers to take their picture. At this point I wasn’t sure if either of these two were actually going to take the plunge. 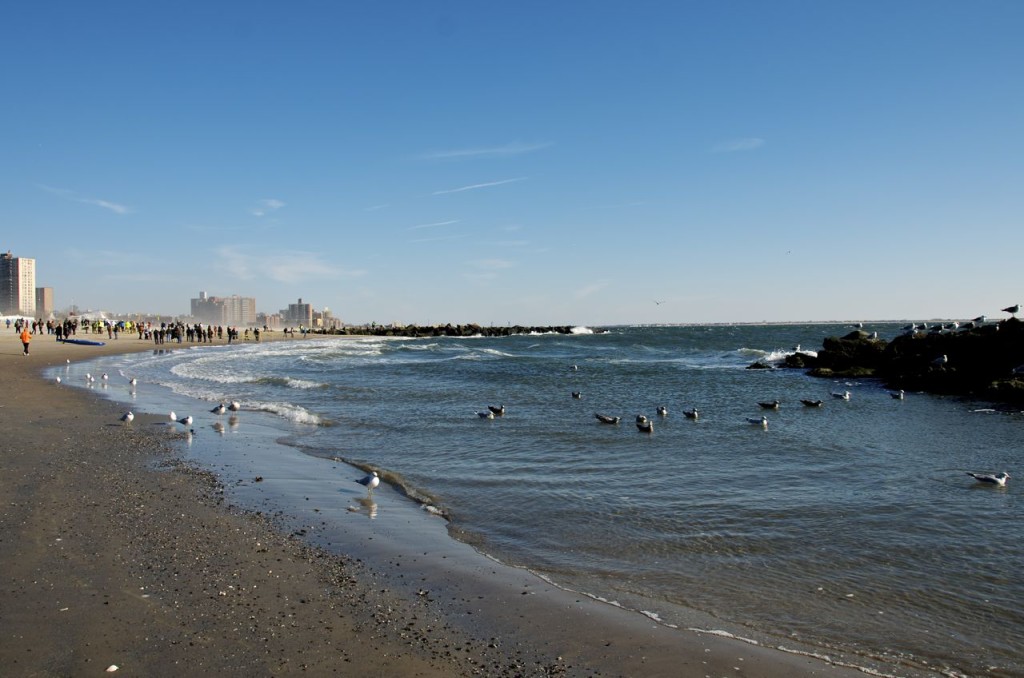 The beach was lovely on New Year’s Day, the temperature in the 30s and I decided to take a walk along the beach before the festivities got underway. The seaguls perhaps sensing something different was about to happen in the area had all moved down shore and were either bobbing up and down in a small cove or perched on a rocky jetty some distance from the hub of excitement. 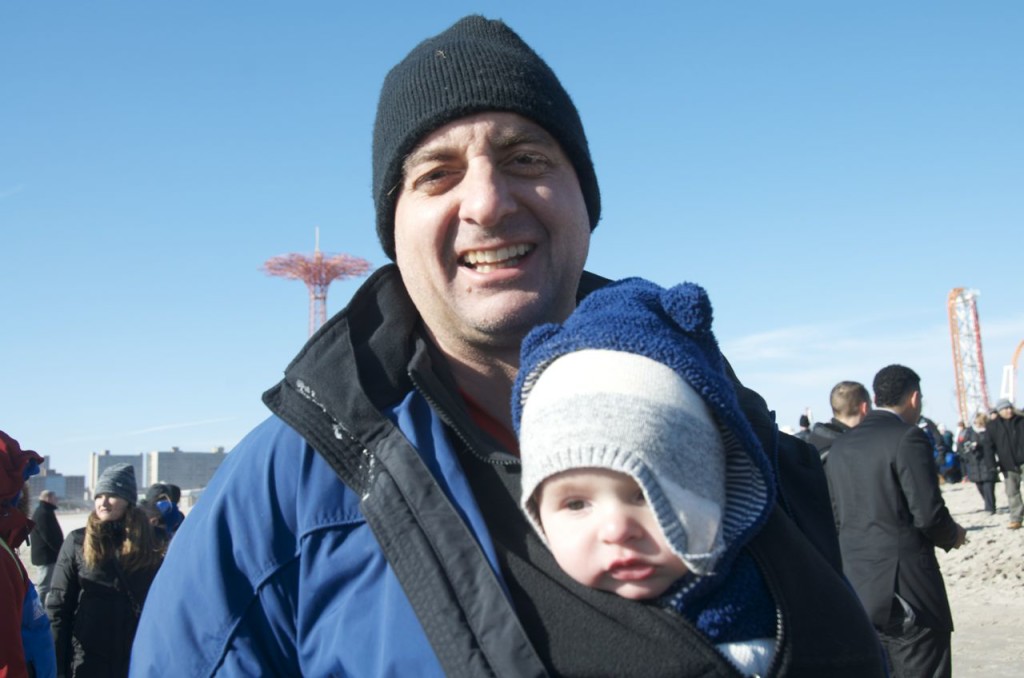 I met this man and his child standing at the edge of the observation line. He asked me to take his photo with his iPhone and the baby seemed to be enjoying all the festivities though it did have a rather healthy runny nose. 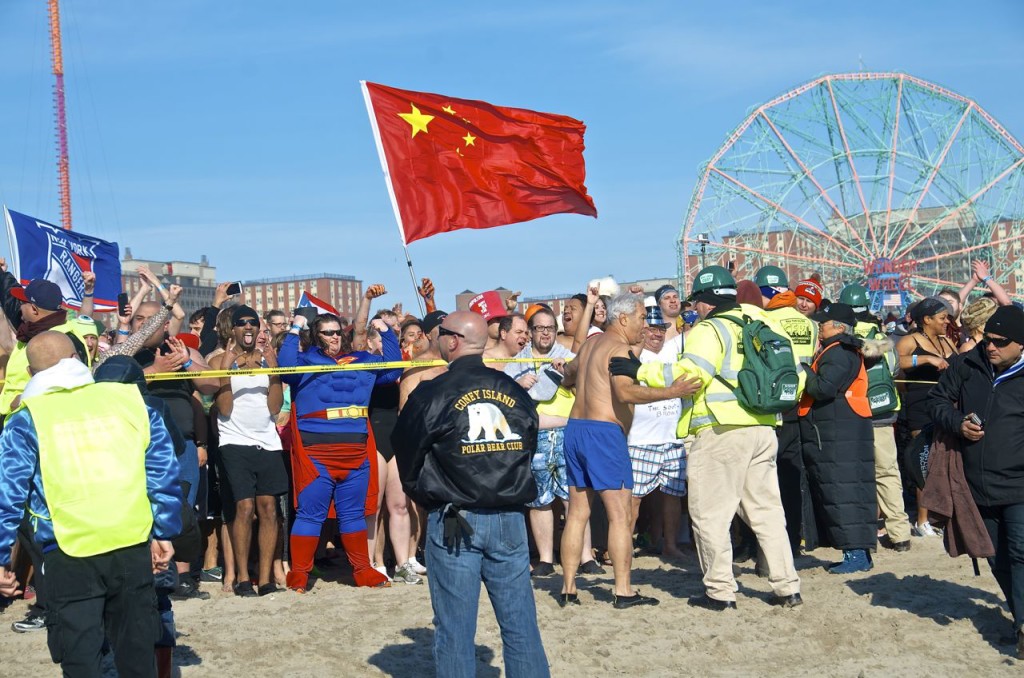 Ah, it was time for the festivities to begin. And sure enough, there was Super Woman in the front line of what was called the first wave. There were hundreds of people signed up for this plunge and they were broken up into sections so that only a certain number of people would dash into the water at one time. 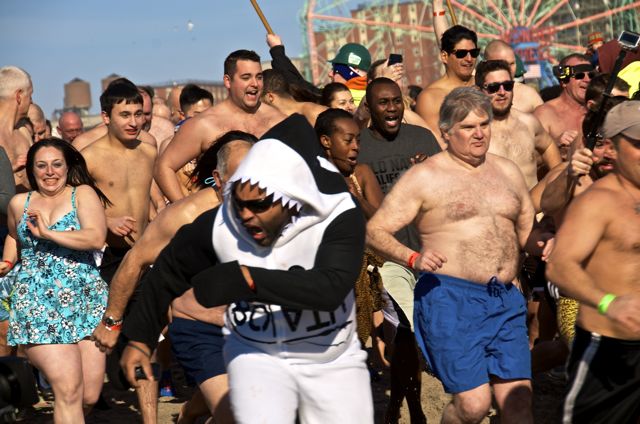 Once the signal was given the swimmers shouted and ran for the frigid water. 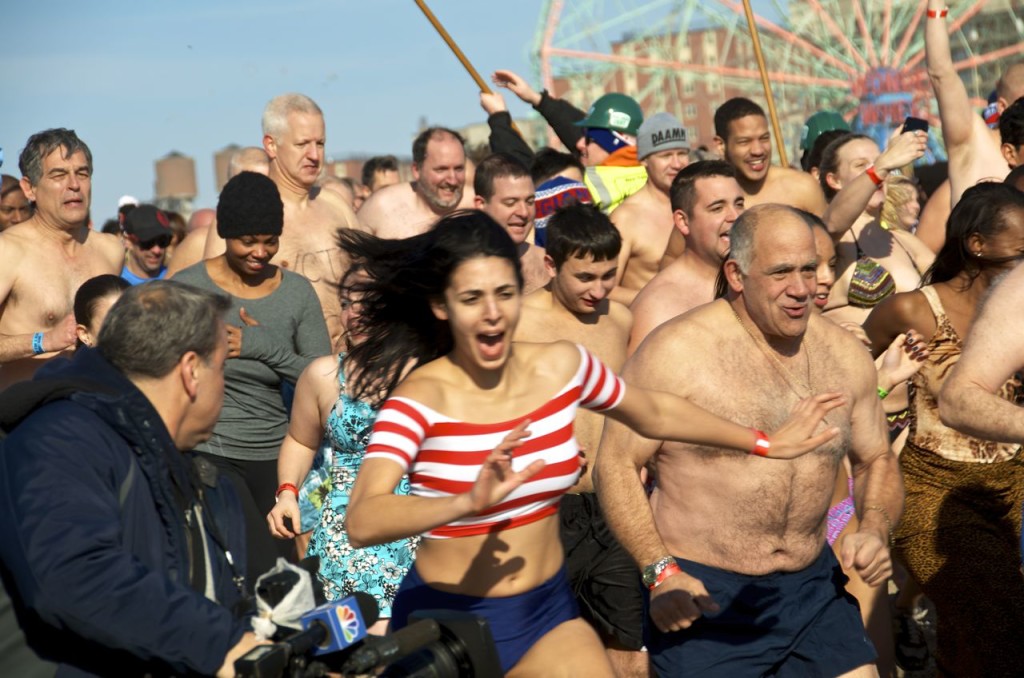 They were all more than ready to make that plunge and though the place was crazy with excitement I saw people taking selfies as they ran or photographed the run to the water on what I hoped were water-proof cell phones. 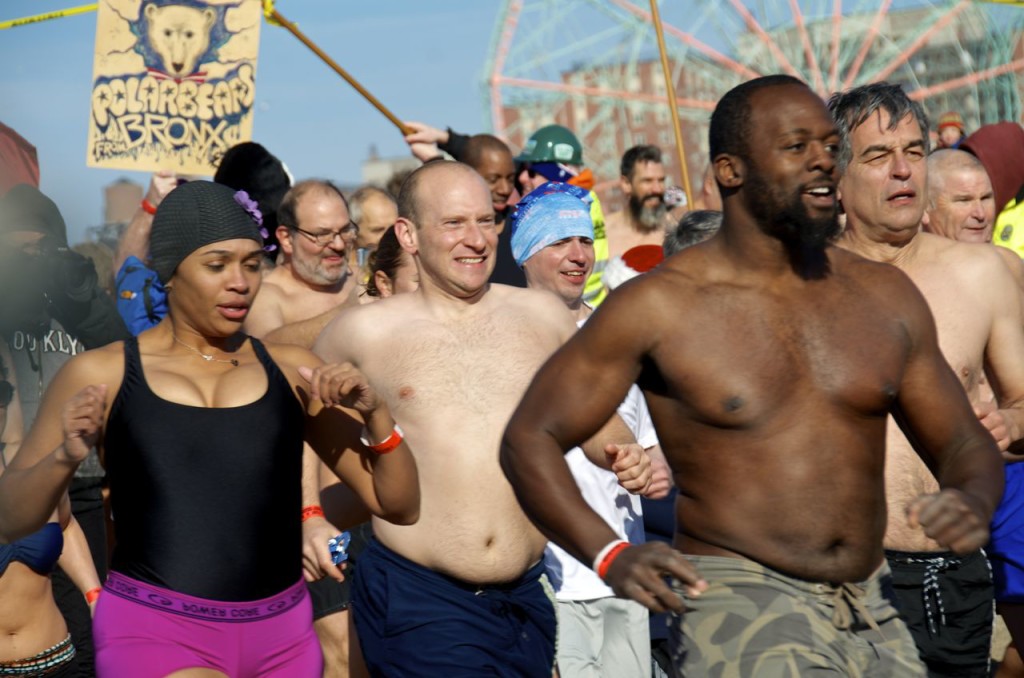 One person carried a sign boasting of belonging to the Polar Bears from the Bronx. 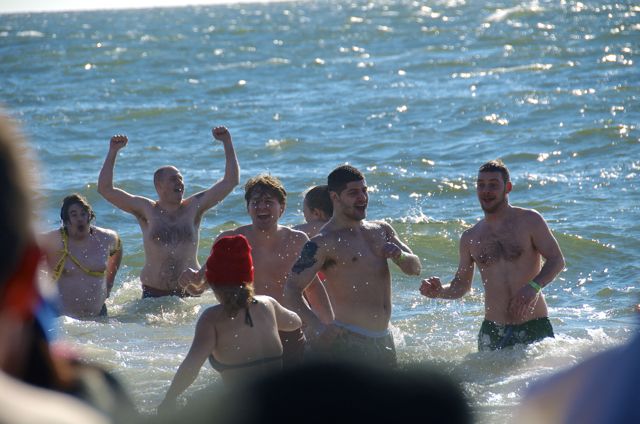 Once in the water people splashed and gave Hi-5s and laughed and screamed. 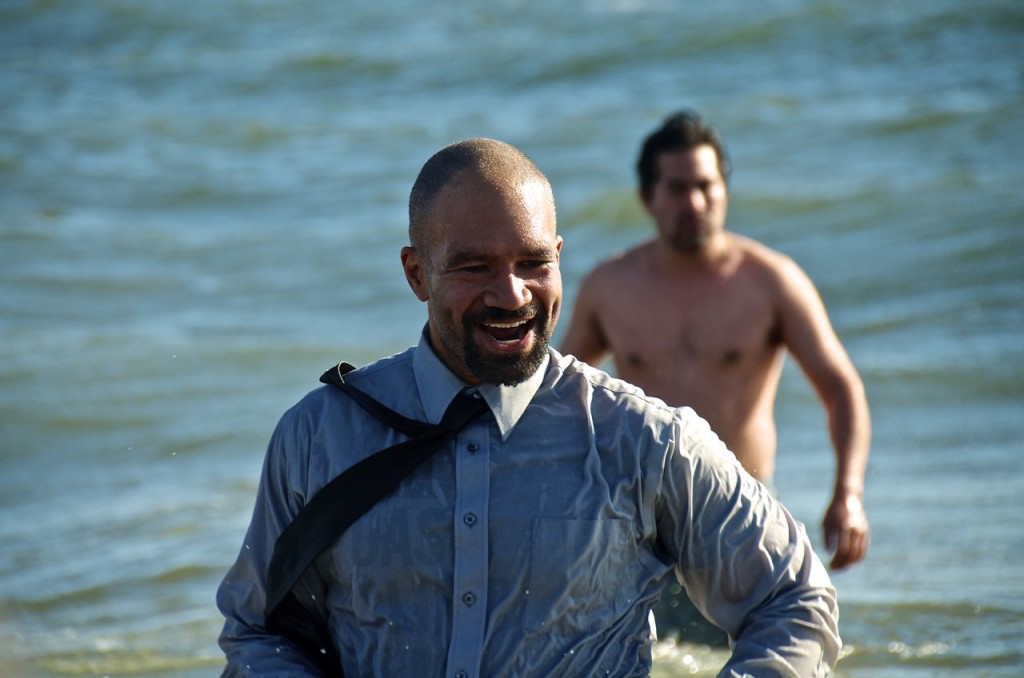 There was no end to the attire some people wore when taking the plunge. This guy dove into the Atlantic in a dress shirt, tie, suit pants and dress shoes. 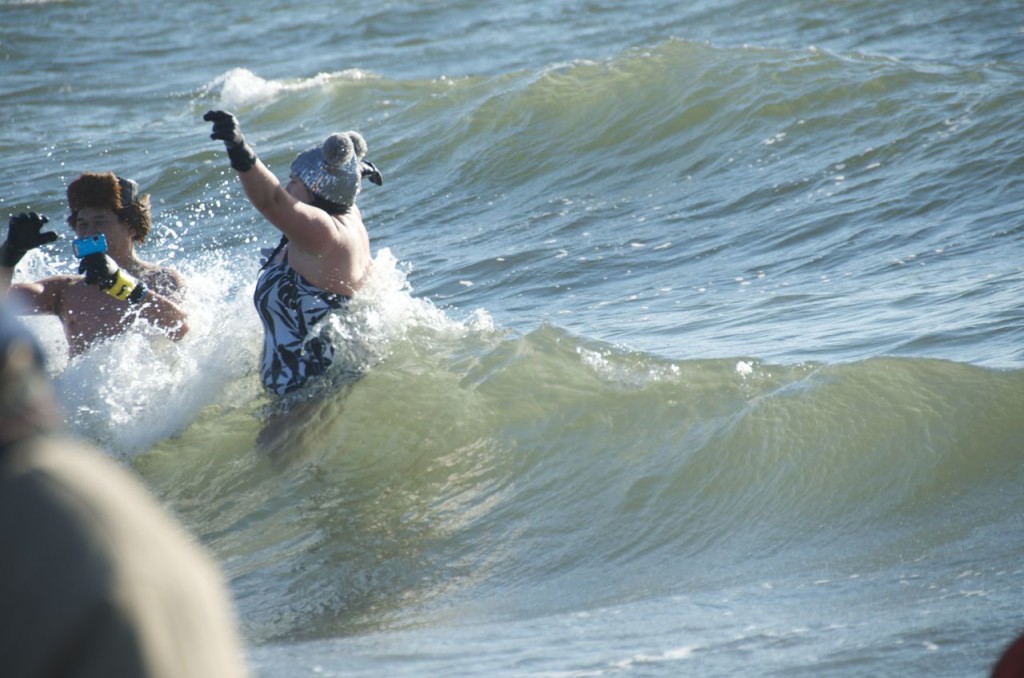 These two bobbed in the waves and were quite reluctant to get out of the water. 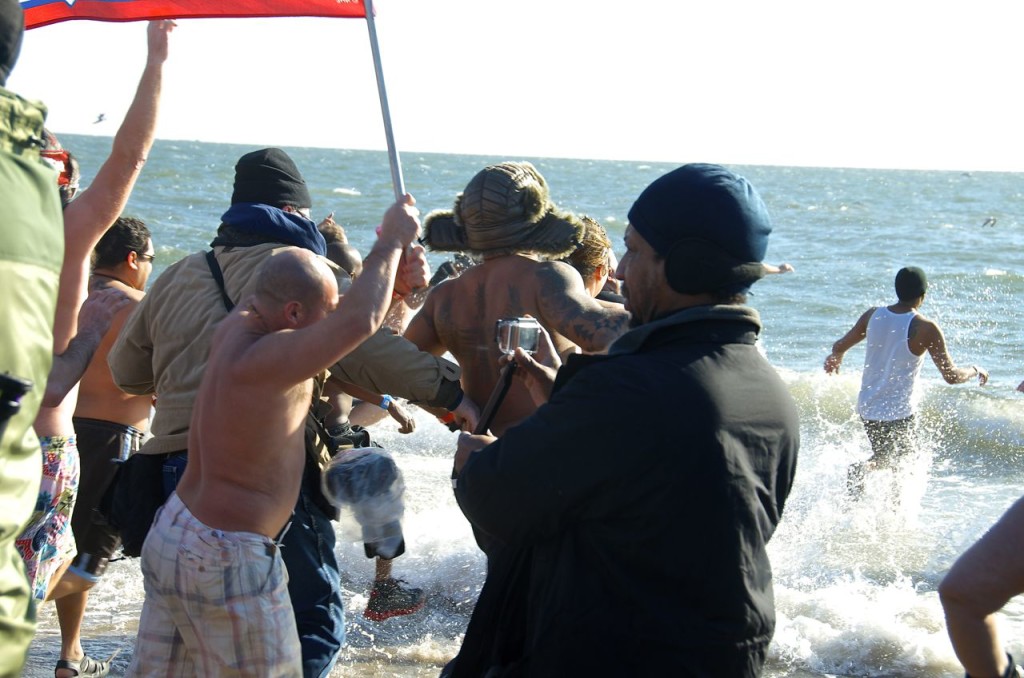 I caught a photo of this group running into the water and I could not believe that this big guy with the black watchman’s hat and heavy coat was going into the water with his camera, though covered in a plastic bag, with all the other plungers. I guess he just got carried away with the excitement. 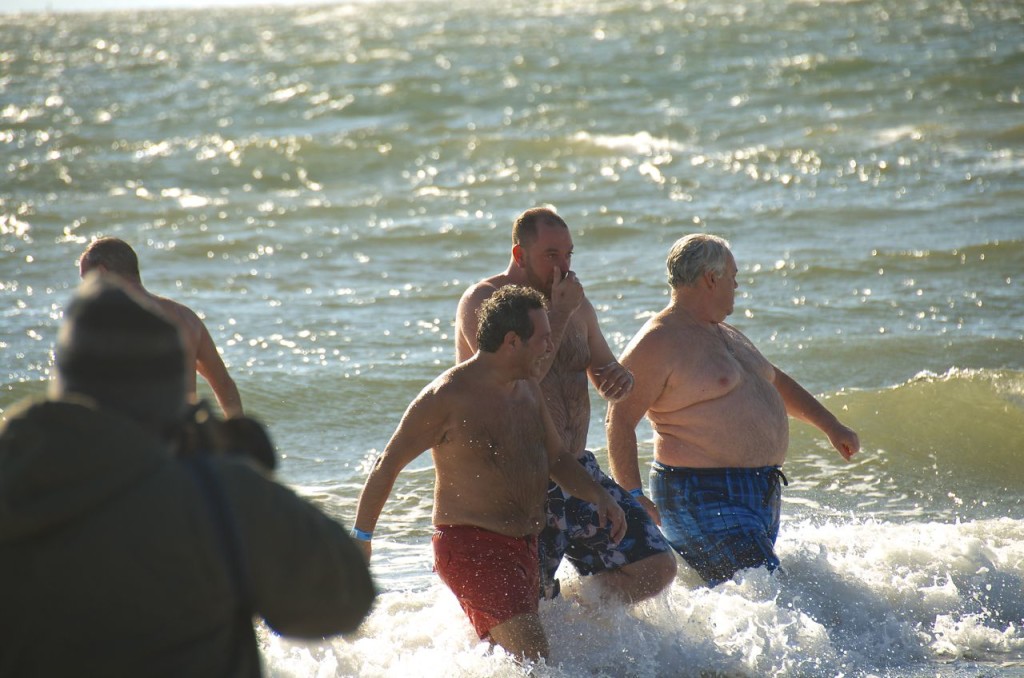 After a long and fun splash in the water it was time to head back to shore. 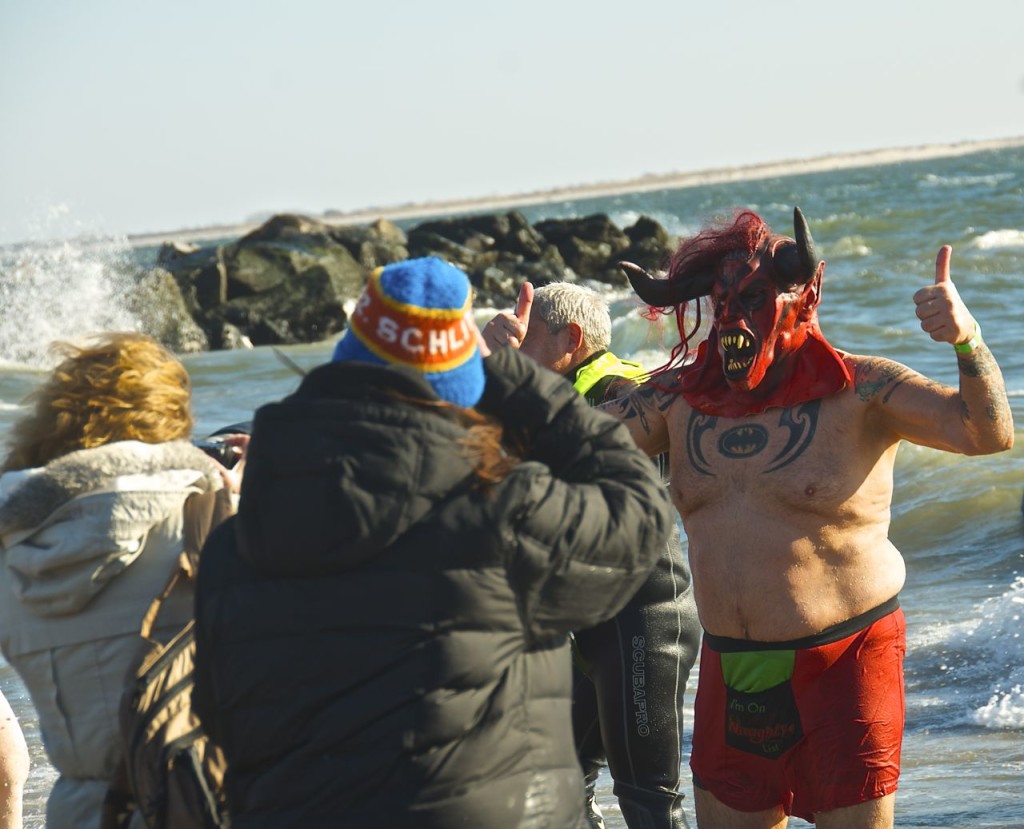 The Devil had made his point and went into the freezing Atlantic Ocean with the rest of the mortals. 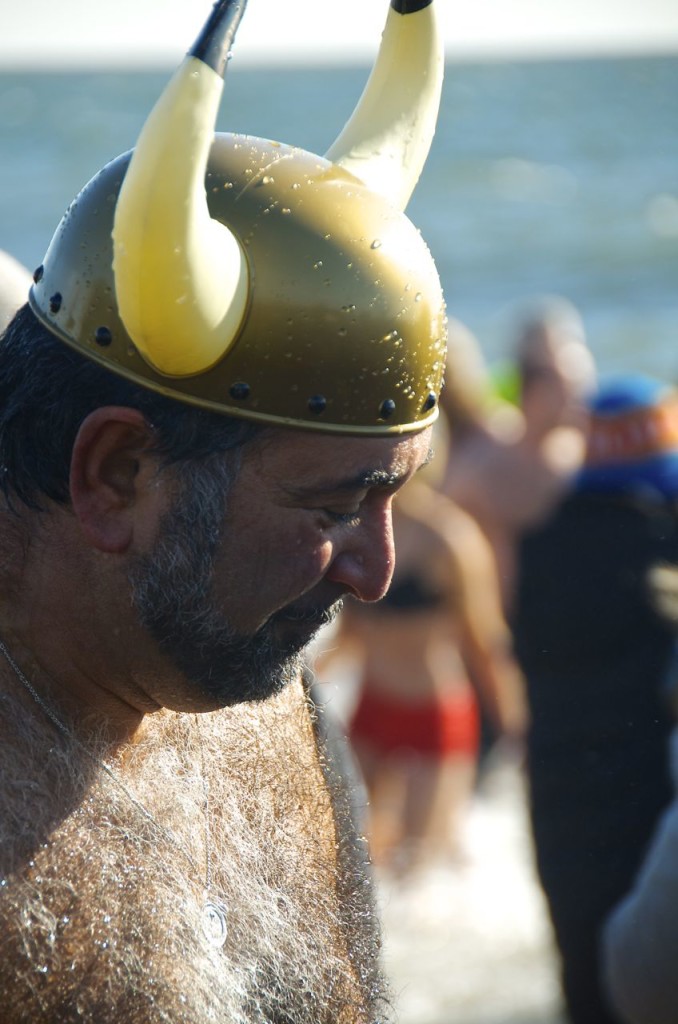 And there were a few Vikings who made a point of seeking chilly water on New Year’s Day. 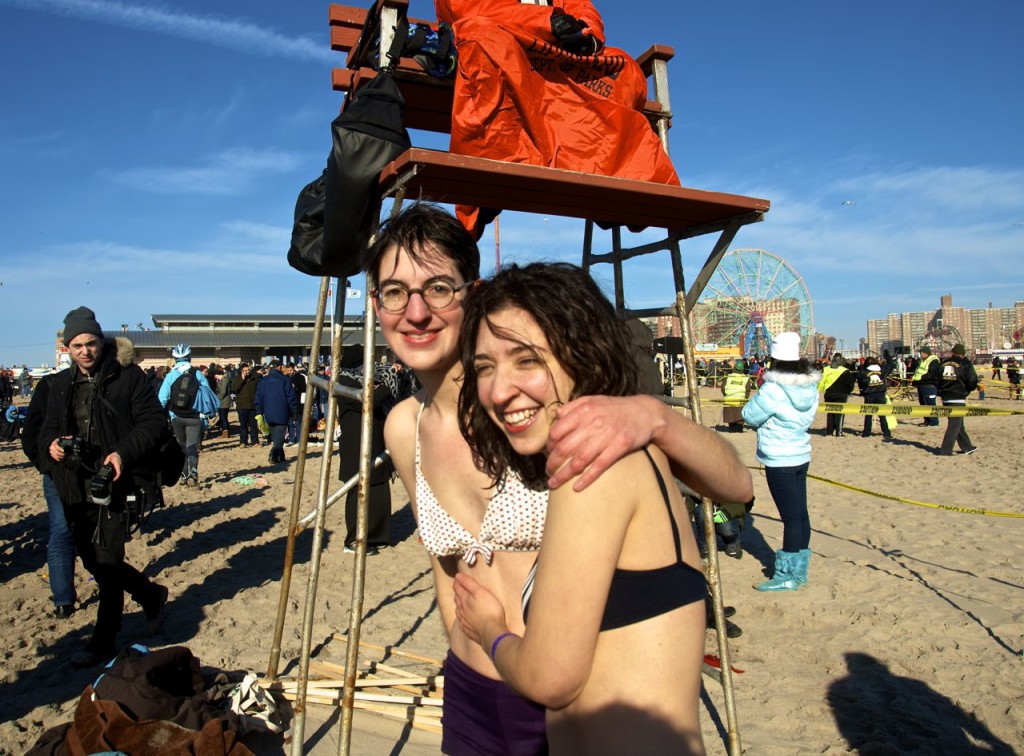 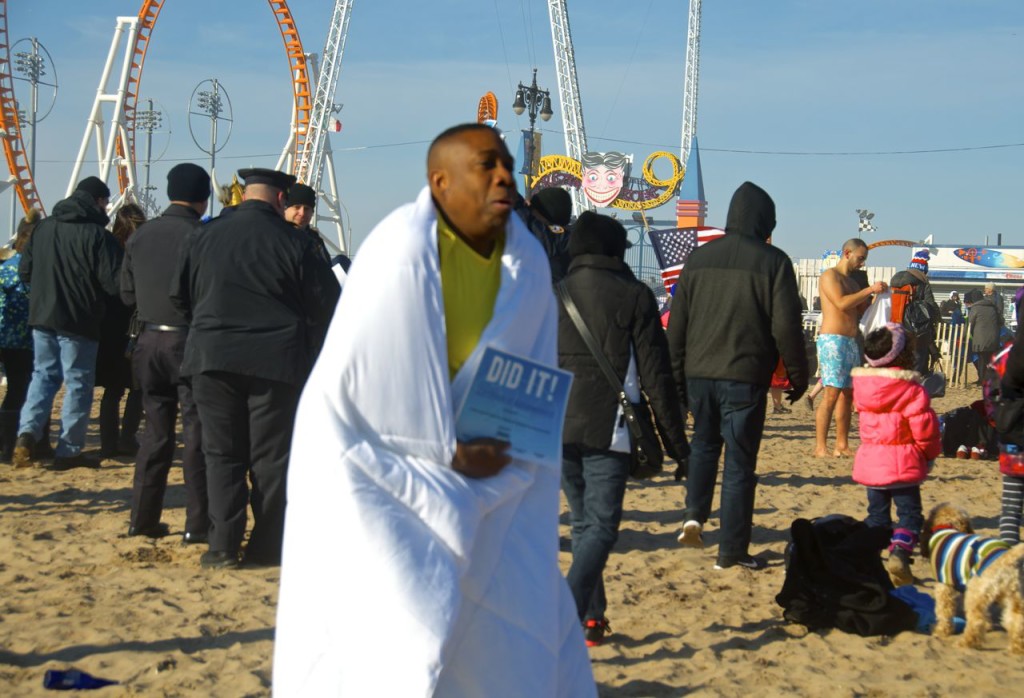 This poor man was so cold he could not stand still for his girlfriend to take his photo. 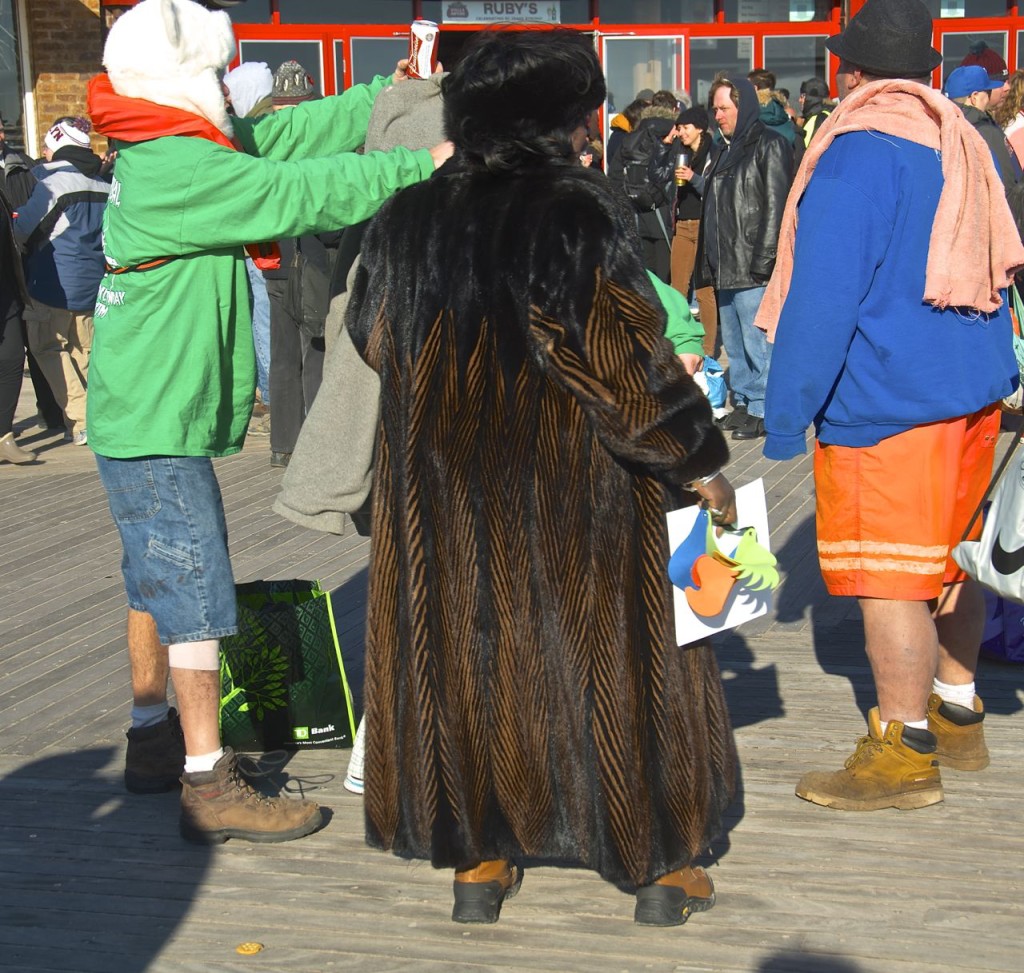 Then there were those who knew it was going to be cold and they wanted nothing to do with getting into that freezing water. This woman wore her fur and assisted a couple friends get dressed after they had taken the plunge. 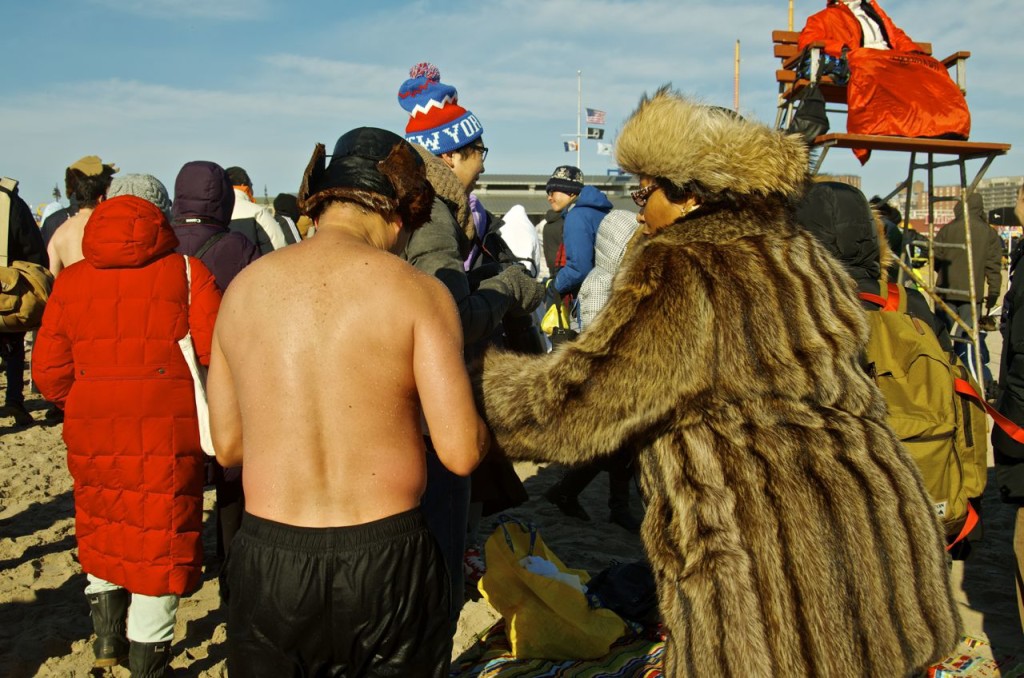 This woman dressed in her fur hat and coat was assisting this man getting dressed after his plunge. His hands were shaking so badly he couldn’t manage the zipper on his coat. But he had worn a fur hat into the water and the thing was soaked with sea water that was streaming down his back. 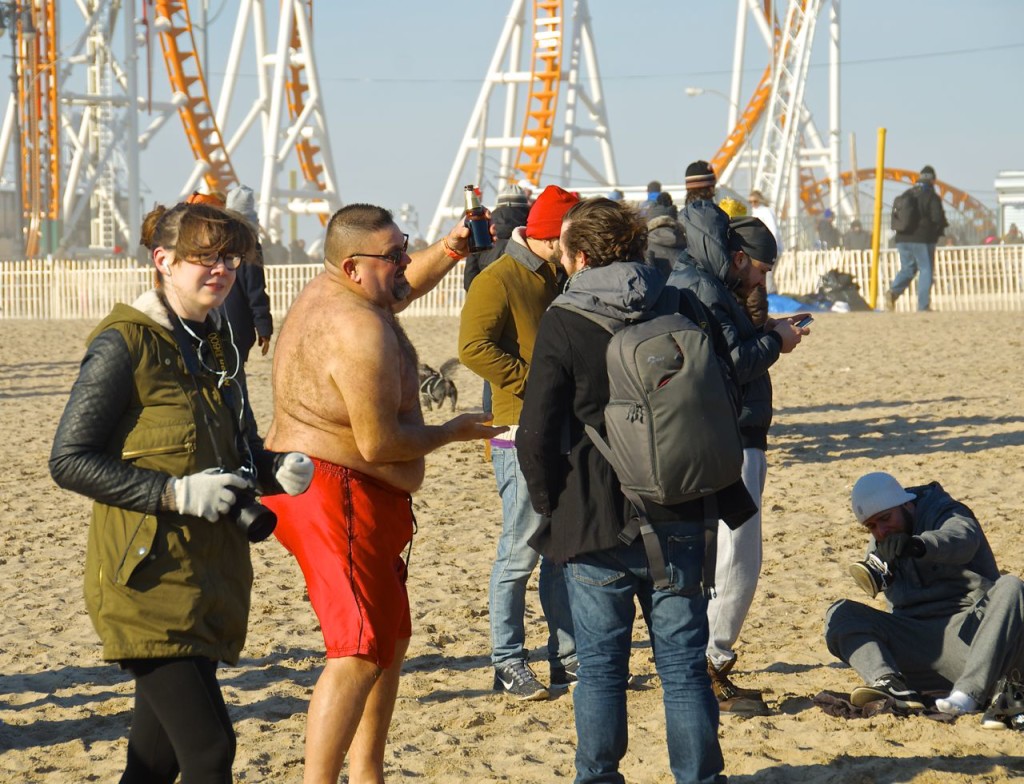 This guy was reluctant to get dressed and decided to have a cold beer and enjoy the winter sun before ending his festivities. 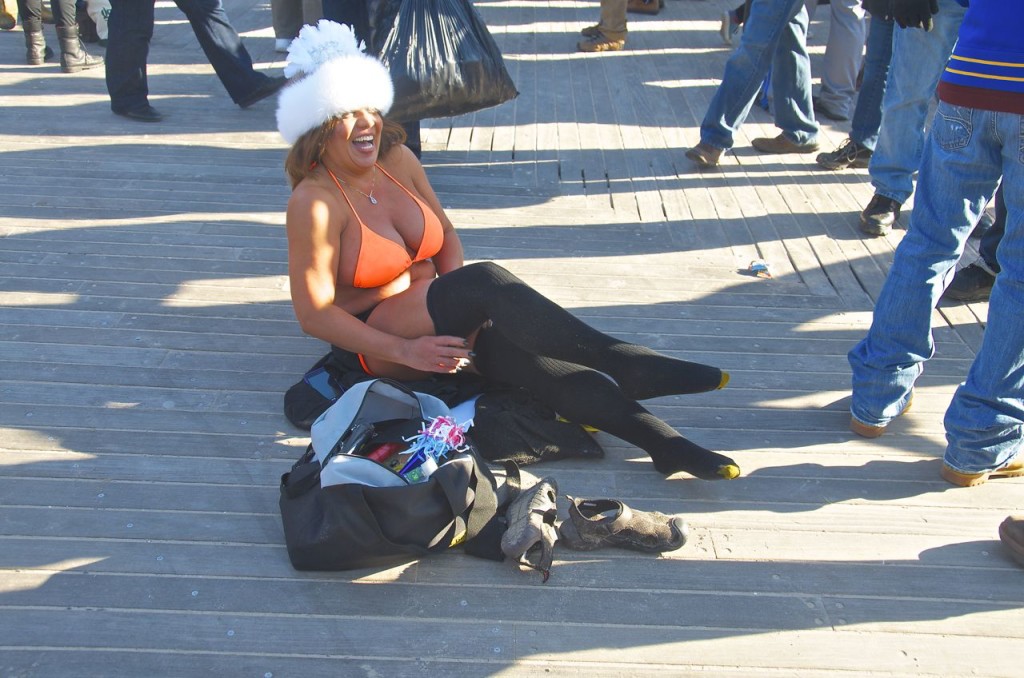 There were no private places to get dressed. The bathrooms had long lines, so this woman sat on her coat and began to dress right there on the boardwalk. She was having a good time and so was everyone else. 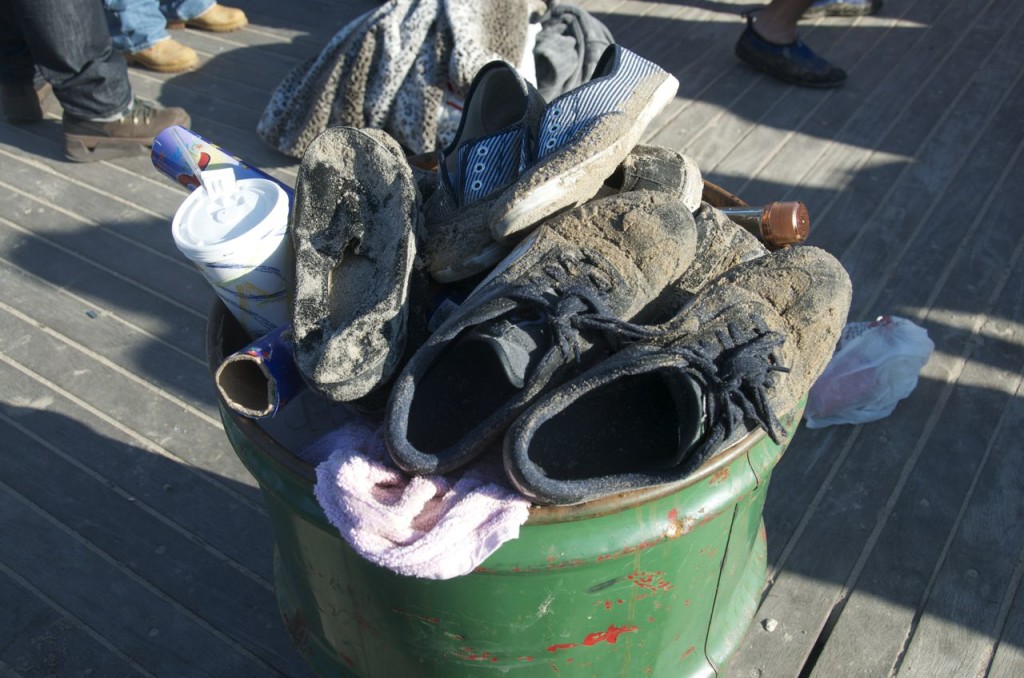 I don’t know if it was mandatory to wear shoes, but most people that I saw running to take the plunge were wearing some kind of footwear. And this is what some people must have done with these sandy items once the excitement was over. 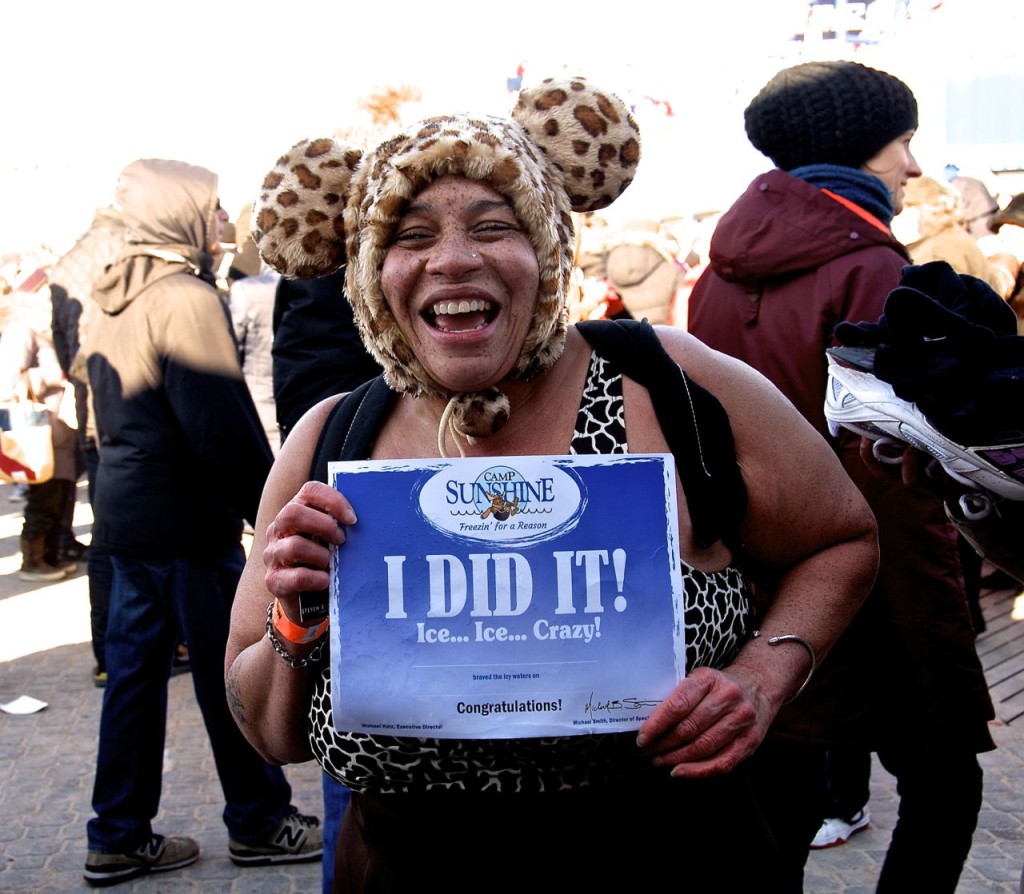 The boardwalk was filled with people carrying “I Did It!” certificates. This woman could not stop laughing and smiling. 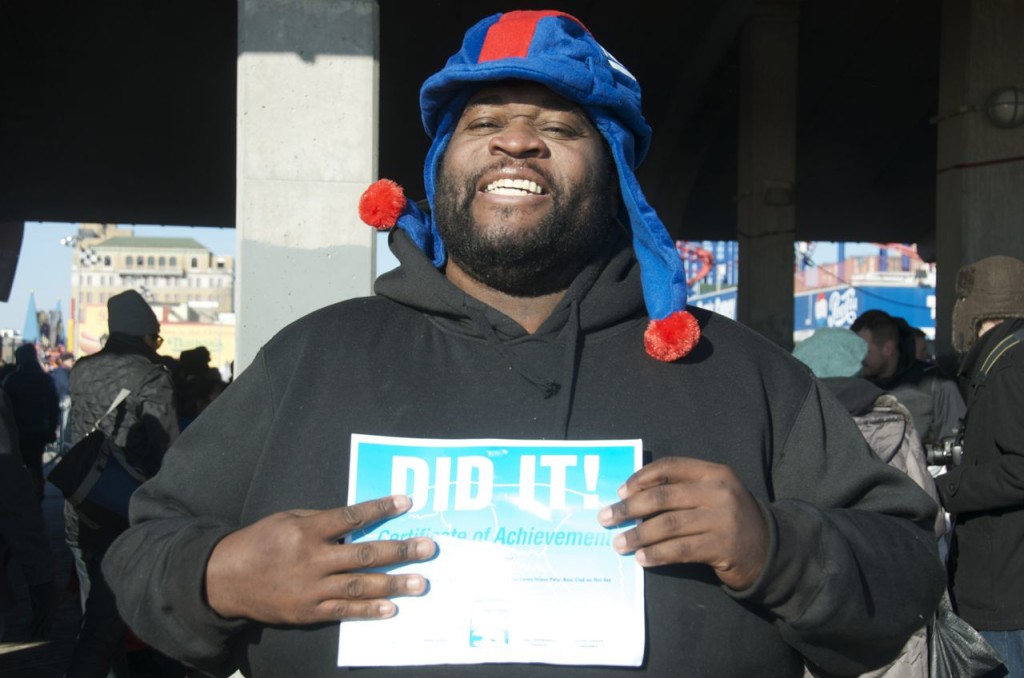 And this guy, with his charming blue hat, posed for me and his girlfriend as he proudly displayed a “Did It! Certificate of Achievement”. 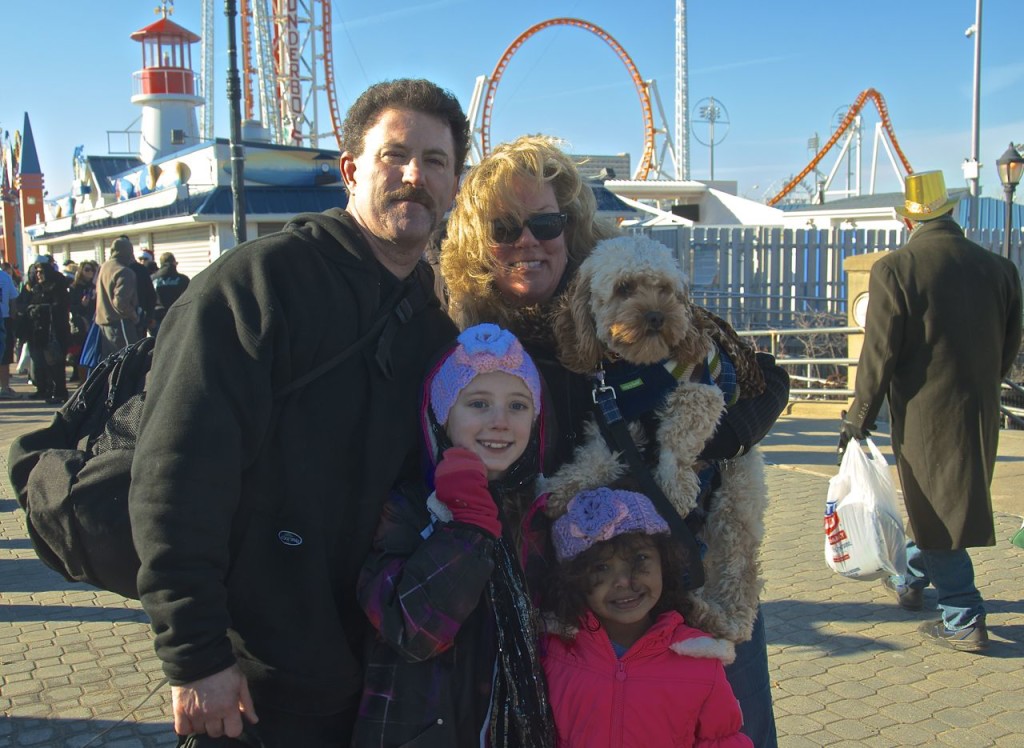 I loved this family. The oldest daughter in the family stopped me and said, “My dad went into the water and today is his birthday.” They were so proud and excited. The father repeated, “Today is my birthday.” I took the family’s photo, wished the father a Happy Birthday, and everyone a Happy New Year.

And you know what? The first baby born on New Year’s Day in all of the 5 Boroughs was born at the Coney Island Hospital, Maxim Olenyukh, 8 lbs. 8 oz. at exactly 12:00 A.M. A perfect ending.