This has been a busy February what with the excitement of FISH KICKER, my novel, nearing its launch date of March 7, and all of the winter snow storms that keep coming and coming. There has been so much going on that I almost let the Lunar New Year slip by without joining the fun. But a couple of photography friends and I met up in China Town to get a taste of the festivities. It was a brutally cold day when we gathered at Sara D. Roosevelt Park on Chrystie St. But the weather didn’t dampen our spirits. 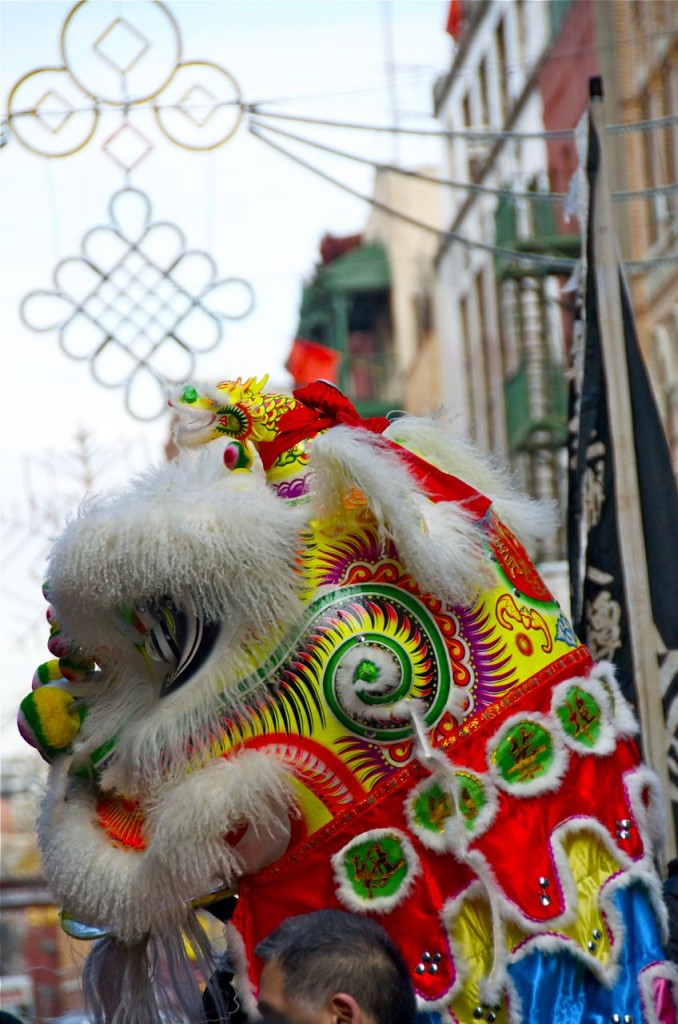 There were city, state and county officials at the opening ceremony. Everyone stood around shivering while the officials yammered on and on about how much they were involved with the community. The crowd huddled together, listening. I’m not sure they were interested, but waiting for the fireworks display that would conclude these long-winded speeches. 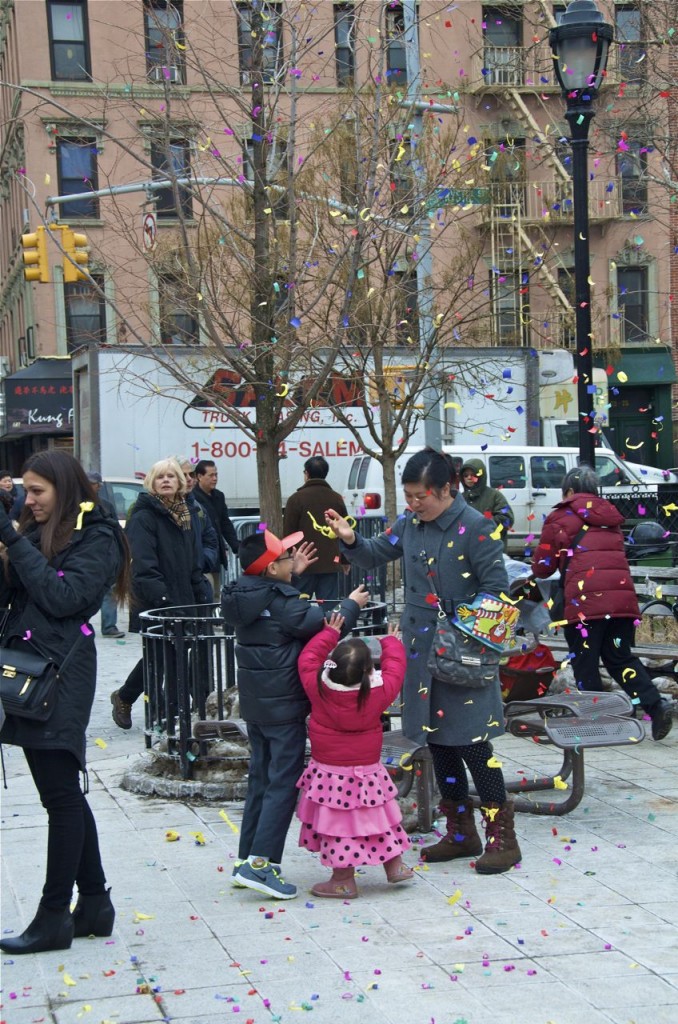 Then there was a loud bang. The air filled with the smell of sulfur and gunmetal grey smoke lifted into the freezing cloudy noon-day sky. More fire crackers exploded. A boisterous cheer rang out, the crowd squeezed in closer to get a better look. And I watched as a mother and her two children danced and laughed at the falling confetti from a popper. 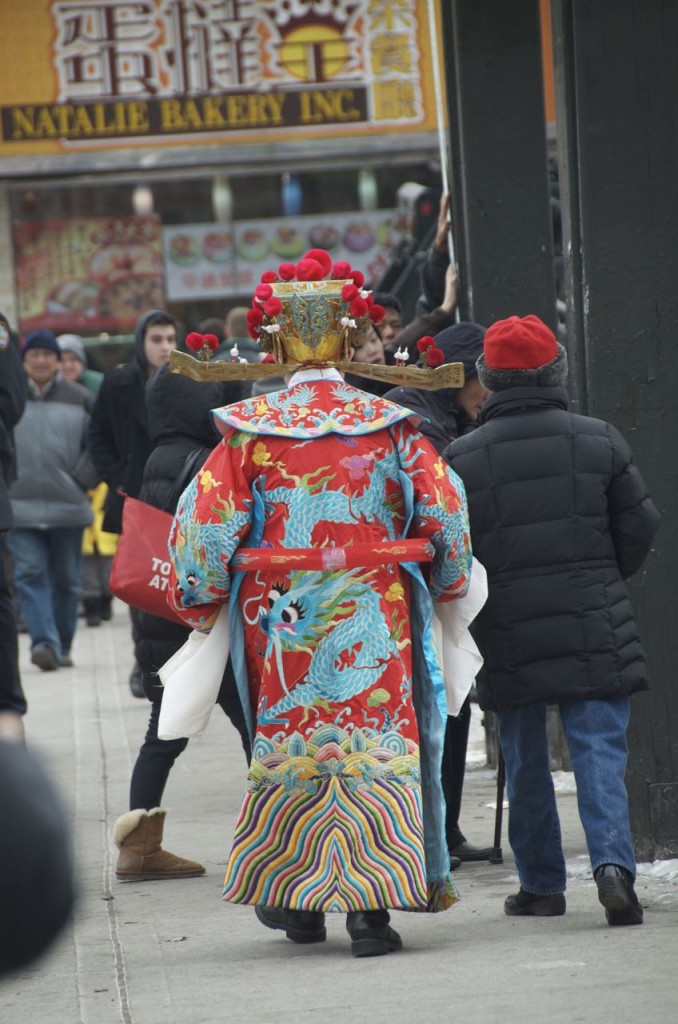 Chinese New Year has its own fashion show and against the backdrop of the dark winter down coats there was often a costumed person rambling along the street, an unexpected vision from a gone-by era. 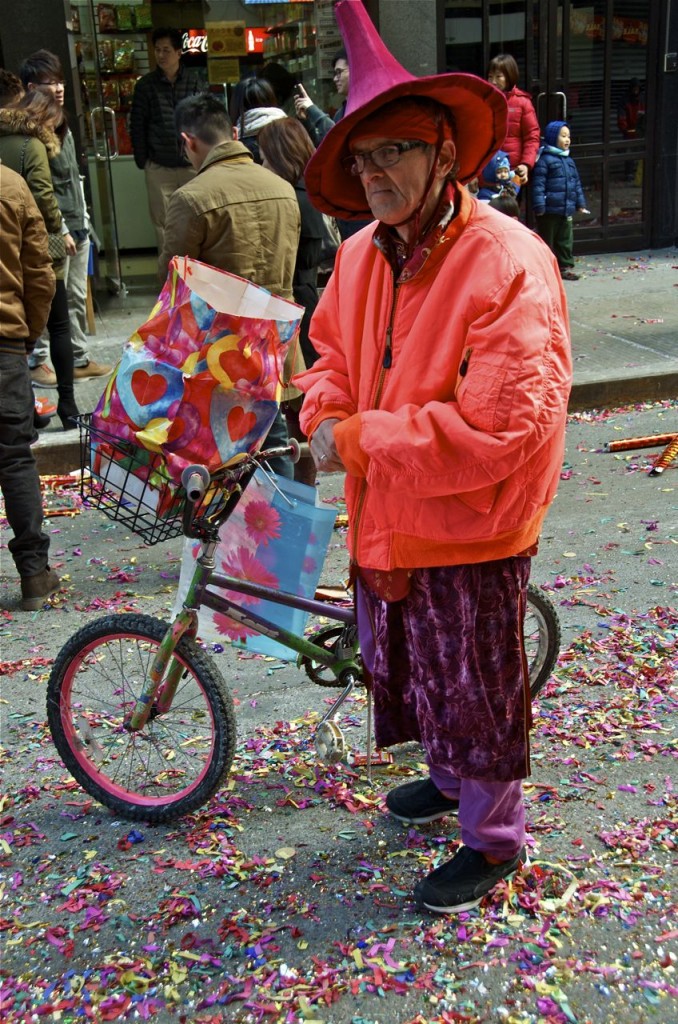 Then there were other folks who joined in on the fun and seemed to have a personal drummer all of their own. 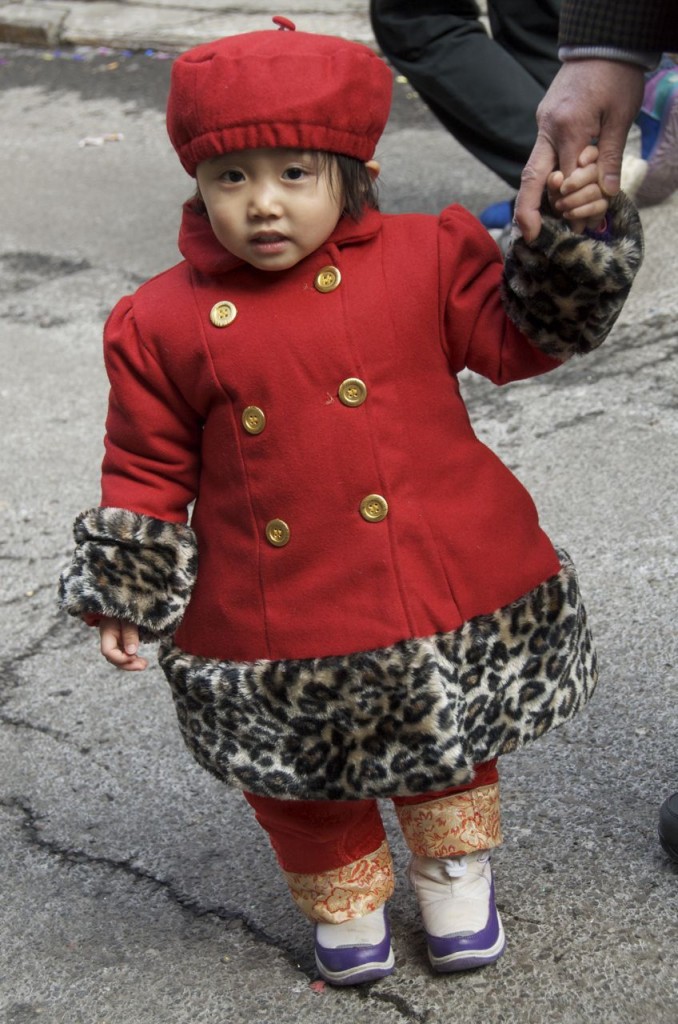 Children dressed in their finest were paraded up and down the streets. This child was escorted by her grandfather who was dressed in richly piled velvet trousers. He gladly stopped for any photographer who requested a photo of this darling. 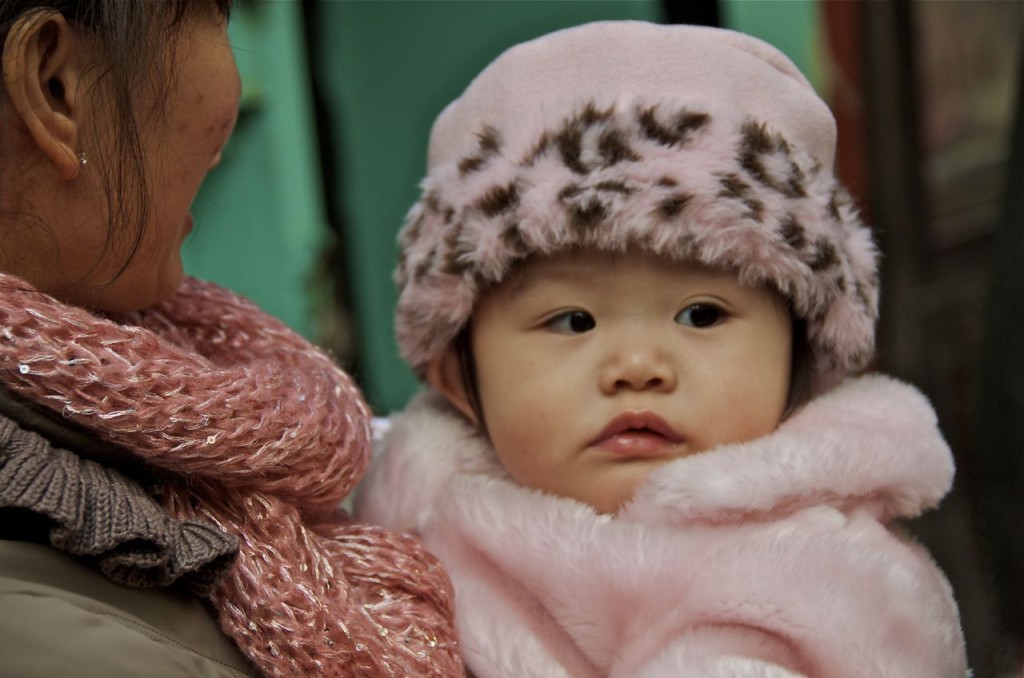 This pink beauty, snuggled in her mothers arms, watched the crowd passing not at all disturbed by the loud noises of the confetti spewing poppers. 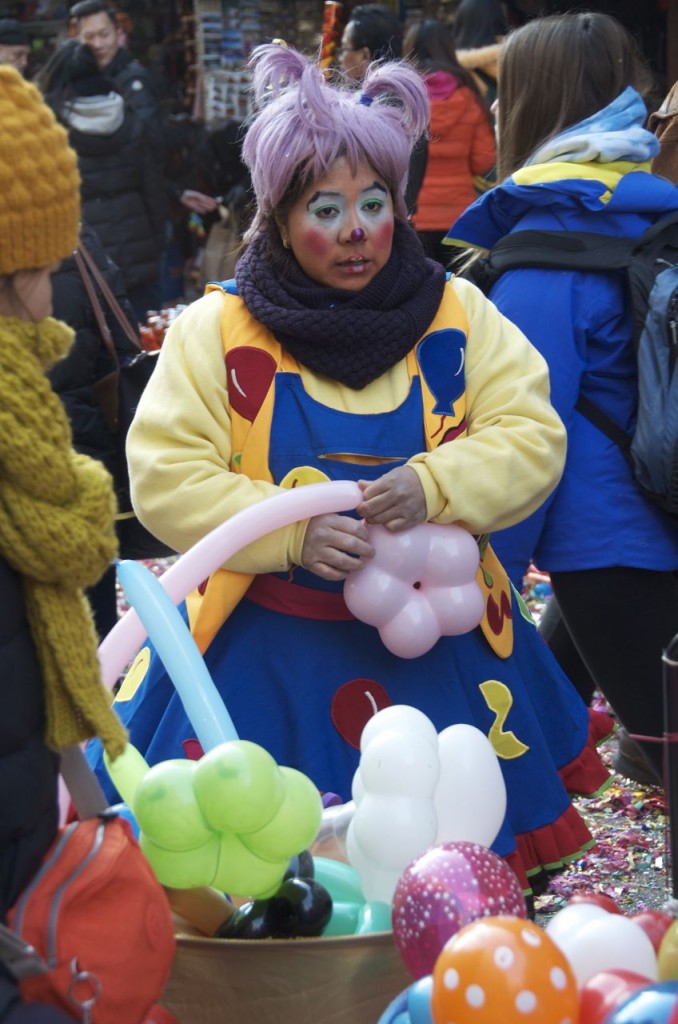 A few clowns, making balloon animals, added to the festivities. 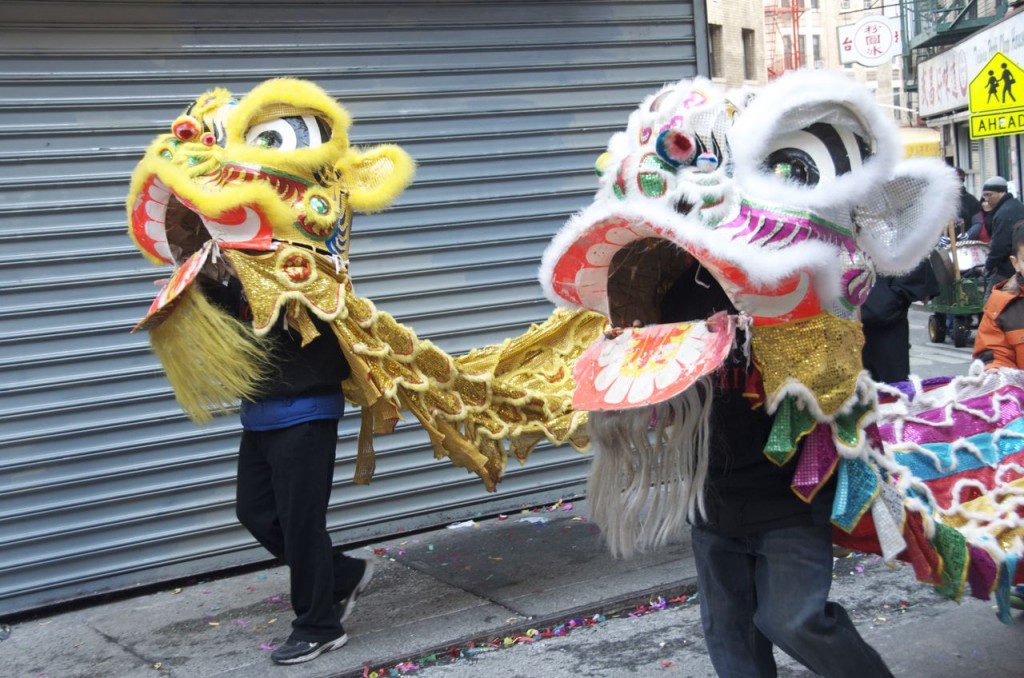 The dragons, dozens and dozens of them, walked the streets of China Town, blessing the merchants, drawing crowds to watch as they did their dragon dances. 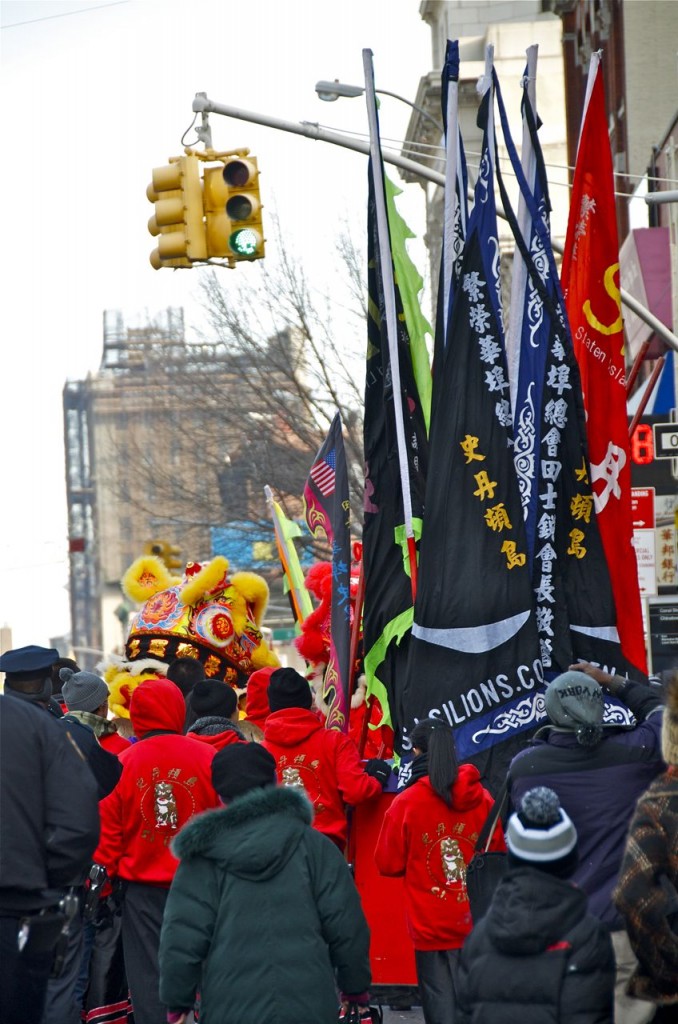 The festivities go on for several days. Many more dragons will show up, specialty foods will be added to menus in the restaurants, the streets will be littered with many discarded confetti poppers and then the celebrations will conclude in a giant parade, usually on a Sunday. 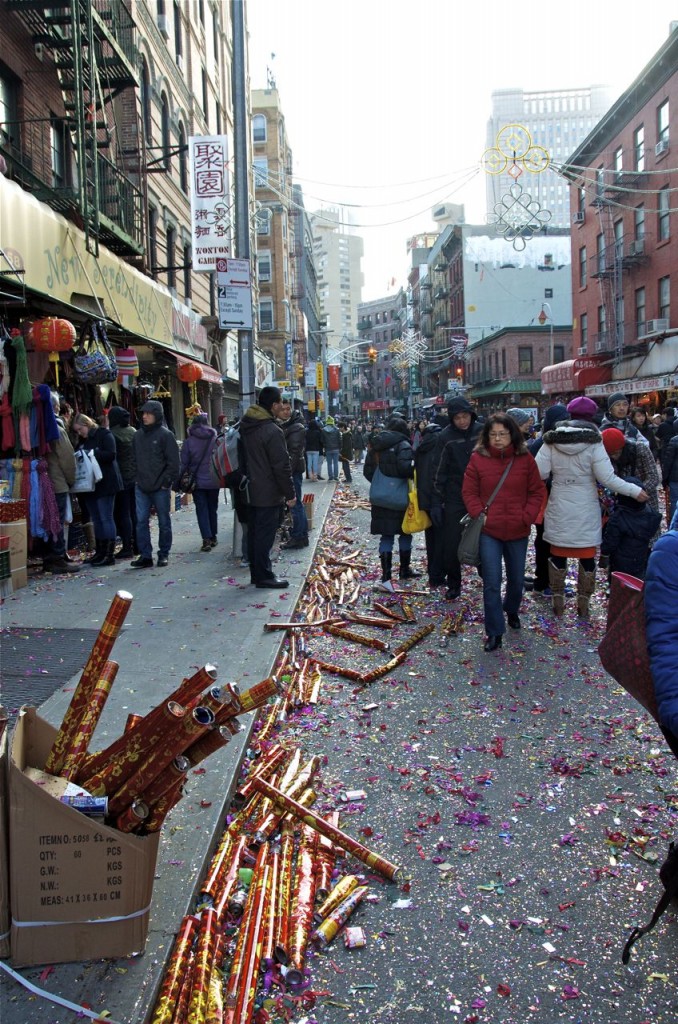 This is a view of Mott Street late in the afternoon. The Chinese New Year Celebration is a crowded affair, but one you won’t forget. I go every year and always get charged by the excitement and  the wild, happy energy.