In the last couple of months I did some museum hopping for a little distraction from writing. My novel, FISH KICKER, is in the hands of the publisher. I’m waiting for the copy editor to send me the final draft and for the artist to send me a proof of the cover art for the novel. Once that is taken care of the only thing that remains is to wait for my manuscript to be turned into a published e-book.

Museum hopping seemed like a good diversion because I’ve also been busy revising another novel, PUSHING WATER, a story set in Vietnam in 1939-1942. Soon it will also be ready to send to the publisher.

I’m a boxing fan and I didn’t hesitate to take time off from writing when I heard there was an ancient masterpiece, Boxer at Rest, on exhibit at the Metropolitan Museum of Art. The statue, on loan from Italy, was excavated in Rome in 1885 near the Baths of Constantine, where it was probably displayed in antiquity. It is an exceptional work in bronze from the Hellenistic period (323-331 B.C.). 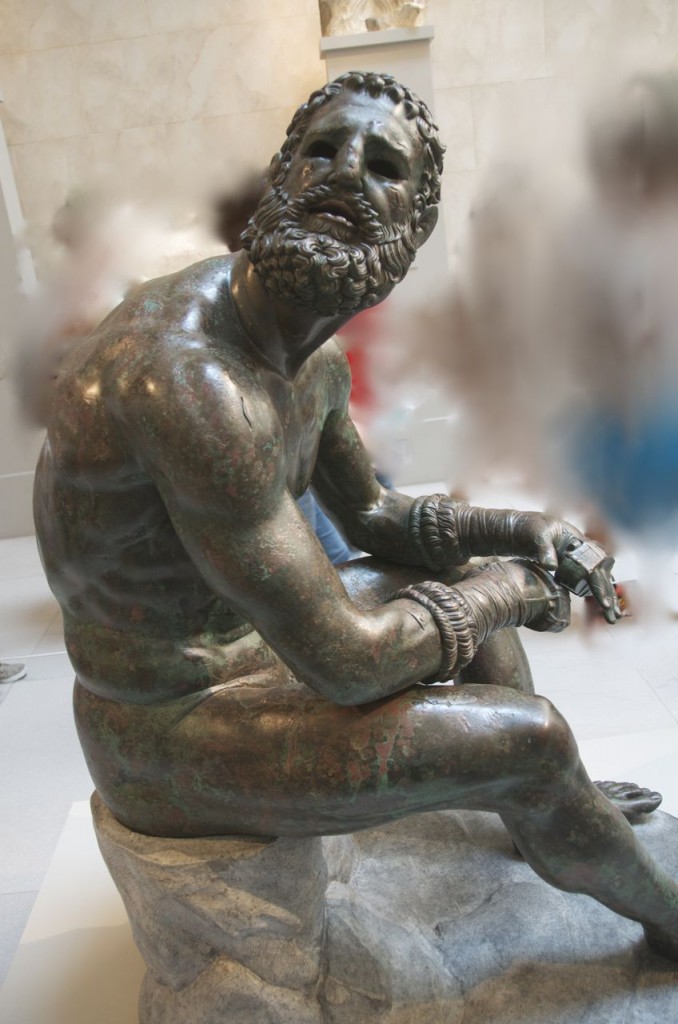 The Boxer at Rest was constructed in separate sections that were then welded toegether: head, body, genitals, arms above the gloves, and forearms. The sculpture has another unique quality with an extensive use of inlaid copper that represents wounds and drops of blood on the face, legs and chest.

When looking at this statue of a pugilist with his swollen face, cauliflower ears, the deep gashes on the face and the apparent broken nose, there is no doubting the brutality of boxing. I know it surprises most people when they learn I watch this sport. I have a couple of women friends who also like boxing and they even go to live matches.

How I got interested in boxing goes back to my childhood. I remember my sister and I sitting on the couch next to our dad watching boxing matches on TV. Mom never liked the sport, but dad’s mom would sit with us sometimes after her visits on a Friday night. She was a severe looking old thing who sat rigid in a straight-back chair, wearing a loose fitting cotton frock, an ancient black pocket book perched on her lap, and her head always wrapped in a scarf to disguise her thinning, dull gray hair. She’d watch for a while and then when the going got rough, she’d put her hands over her eyes and call out, “Cheese and cracker, oh, cheese and crackers, they’re going to hurt themselves”. 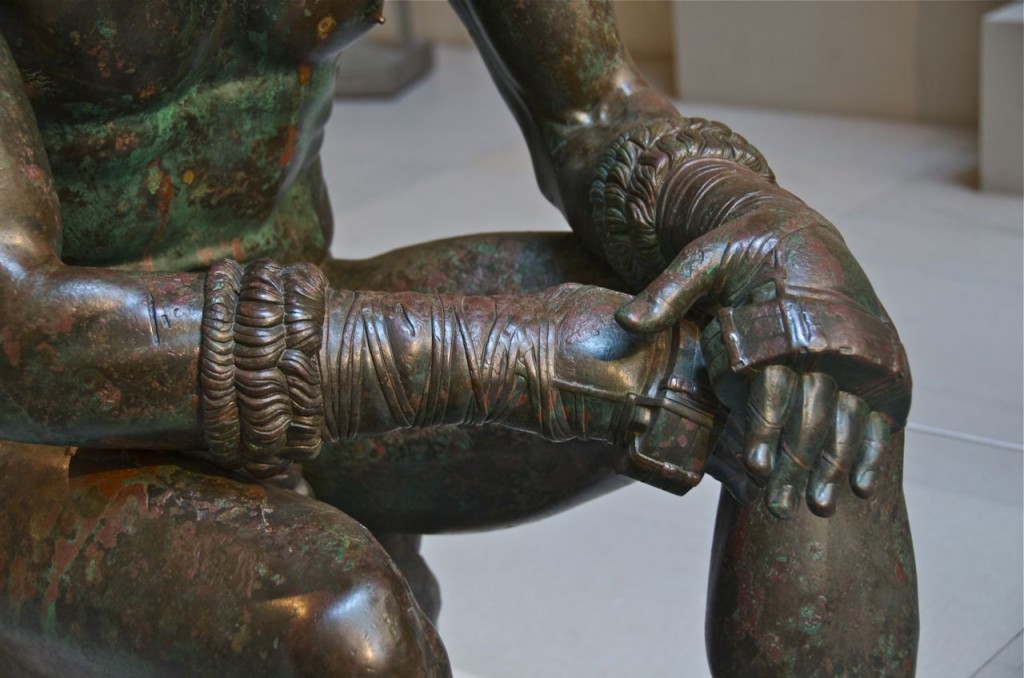 The attention to details on the sculpture is stunning. The hands wrapped with oxhide straps, primitive gloves, tell the story of brutality. When I was a little girl watching a boxing match on our 12 inch TV screen it didn’t seen so brutal, only a rough way for two men to help us spend time with our dad.

But looking at these leather-bound hands of the Boxer at Rest I see a cruel history of the sport. Boxing was introduced into the Olympic games in 688 B.C. and evolved into an integral competition at all the major pan-hellenic sanctuaries where athletic events were held in connection with religious festivities. A boxer faced one opponent after another, typically without pauses, and blows were dealt exclusively to the head and face. The rules for boxing in ancient Greece certainly differ from those of today. 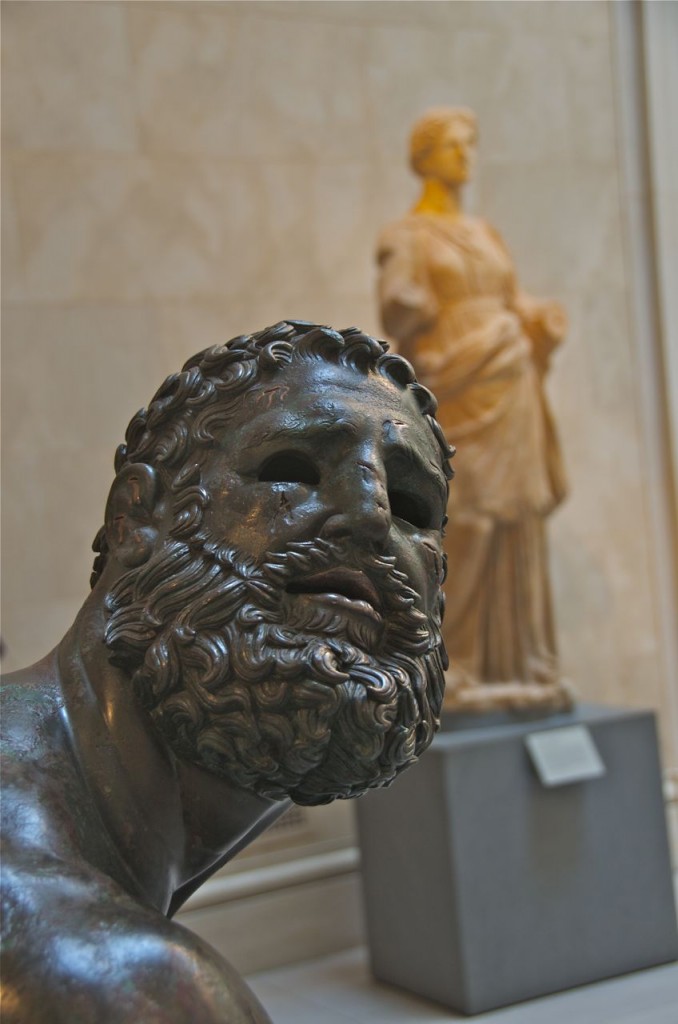 But I see the humanity shine through this statue with the boxer’s backwards glance. What does he see? Is he looking at the cheering crowd? Is he a slave? Perhaps he’s a captured fallen enemy. Is he scanning the crowd for a familiar face? Or does he see his opponent coming into the arena? Whatever the boxer is looking at, his gaze is captured for an eternity . 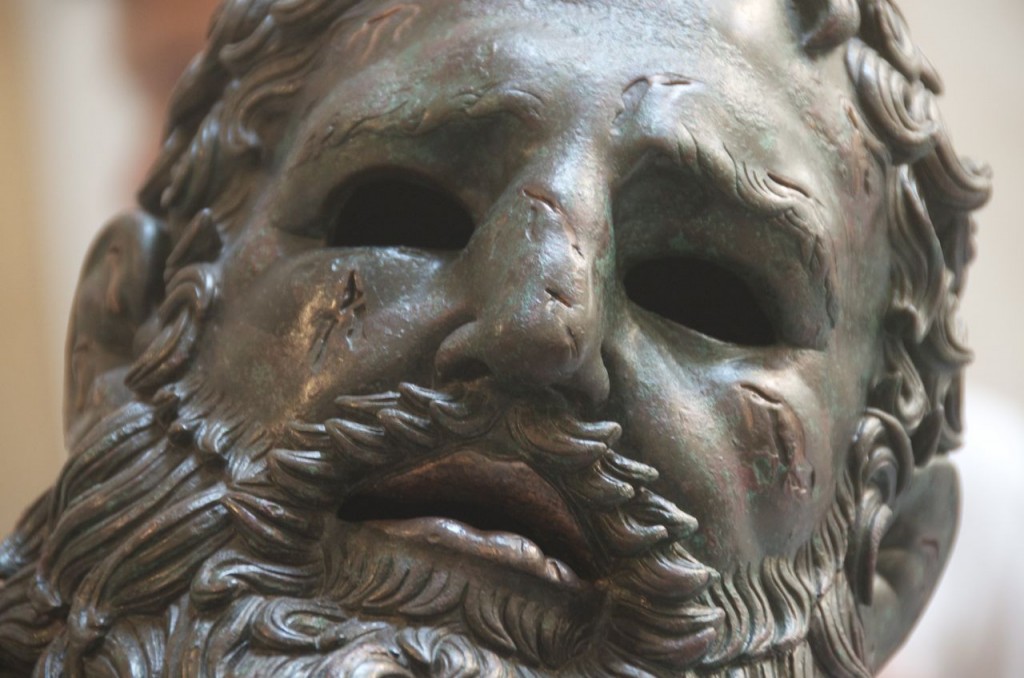 Here is a close up of the Boxer at Rest’s face. There once were eyes in those empty sockets. But the expression on this ancient pugilist’s face does not require eyes to let the viewer know that our boxer anticipates something! 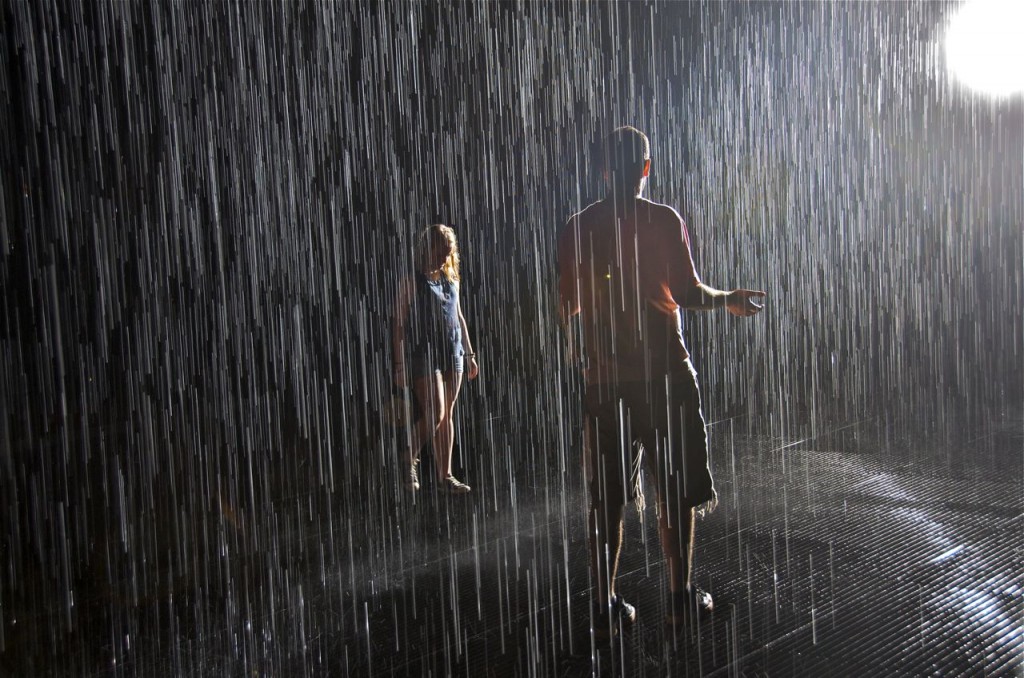 On one hot NYC summer day, as part of my museum hopping, we visited the “Rain Room” at the Museum of Modern Art where motion detectors carefully  choreographed a downpour. The room not much larger than the average dance studio had a twenty-five foot ceiling. The water poured down at random intervals allowing the attendees to walk through the manmade rainstorm without getting wet. The room was dark except for a large spotlight that illuminated the rain like falling jewels. It is estimated that 100,000 people visited the Rain Room this summer. 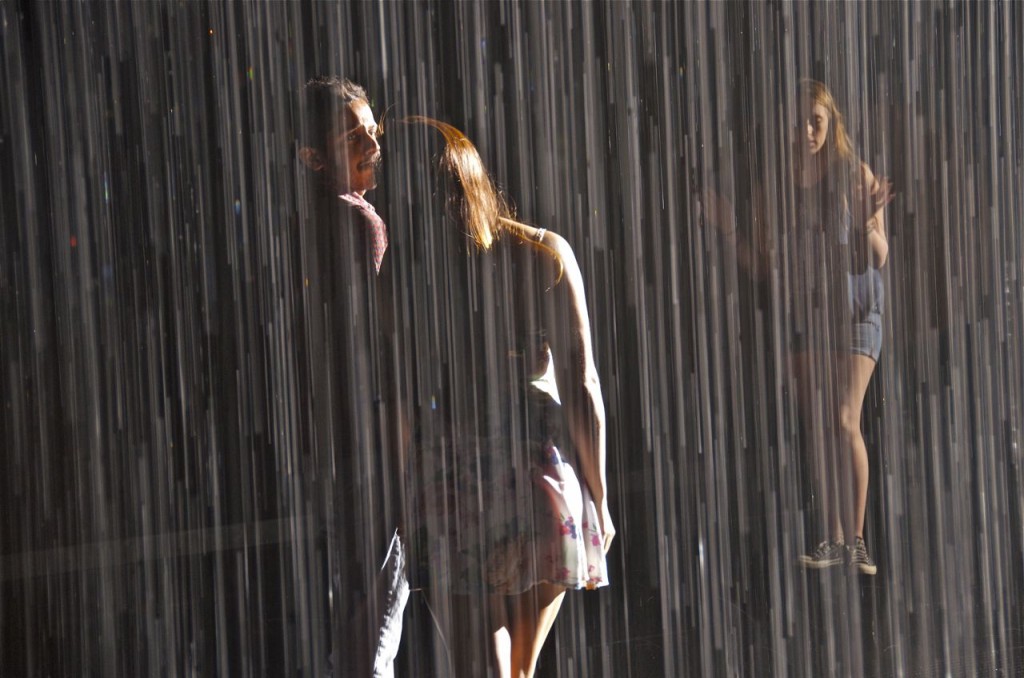 There were two lines to get in to the exhibit. One line was for people who wanted to actually participate in the rain experience. This line was quite long and frequently wound around the block. Some people stood in line long before the museum opened their doors and it was not uncommon to hear that some visitors waited in line for up to nine hours before getting into the exhibit. 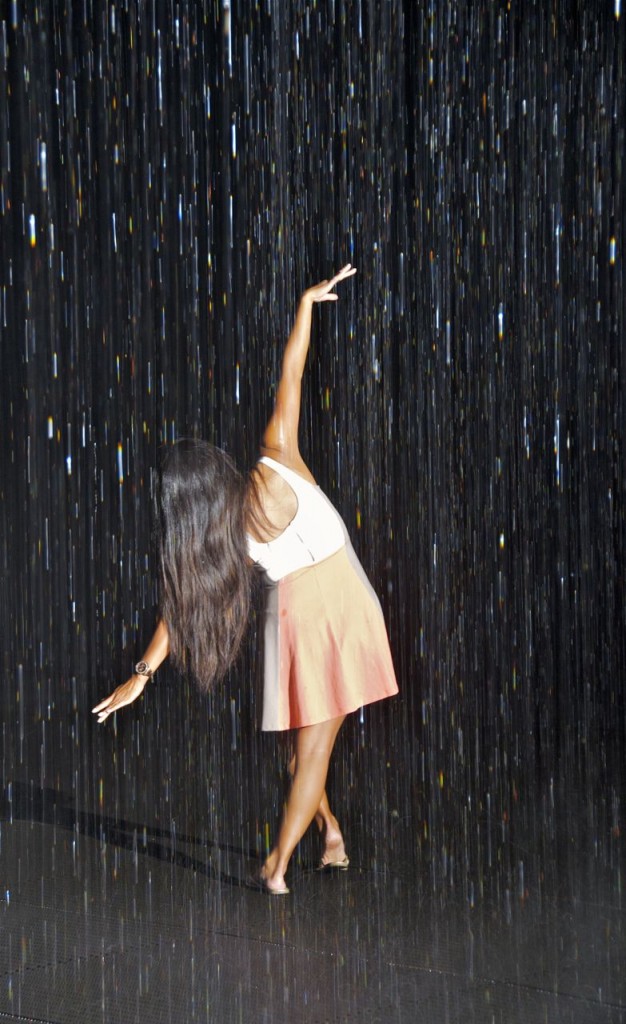 The other line, the line I stood in, was for those who wanted to only look at the rain room, not participate. That line was, on the average, only a thirty minute wait. I had no intentions of waiting all day just to walk through the rain. NYC had a lot of stormy weather this summer and frequently those people waiting outside all those hours were soaking wet before they got into the Rain Room.

Dance troupes and acting schools brought in classes and there were many pretty young women prancing and posing for the photographers. 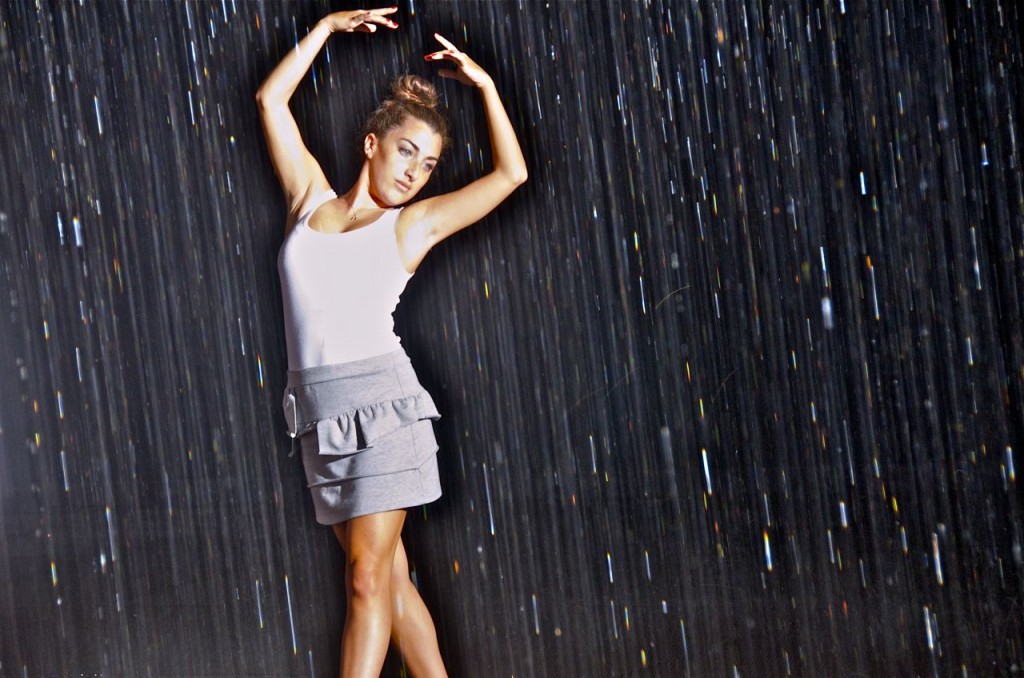 We stood around and watched. I took one last photograph of a lovely woman posing in the rain and then we went outside and caught the #7 Bus and traveled uptown. We got home just in time to watch a gentle rain trickle down our living room windows.

I turned on the computer, opened a file and like the rain, drop by drop, I began to revise my novel, word by word.

← ANOTHER DAY OF SUMMER
DEAR DIARY →

12 comments for “MUSEUM HOPPING: THE BOXER AND THE BEAUTIFUL”