It was Sunday, Father’s Day and the day before the summer solstice. It was a flawless brilliant sunny day in New York City. The air was alive with energy and we were headed to Central Park to watch the NYC Soap Box Derby. Our daughter, Liza, has an after school program, Green Apple Kids, and they were one of the participating groups in this derby. 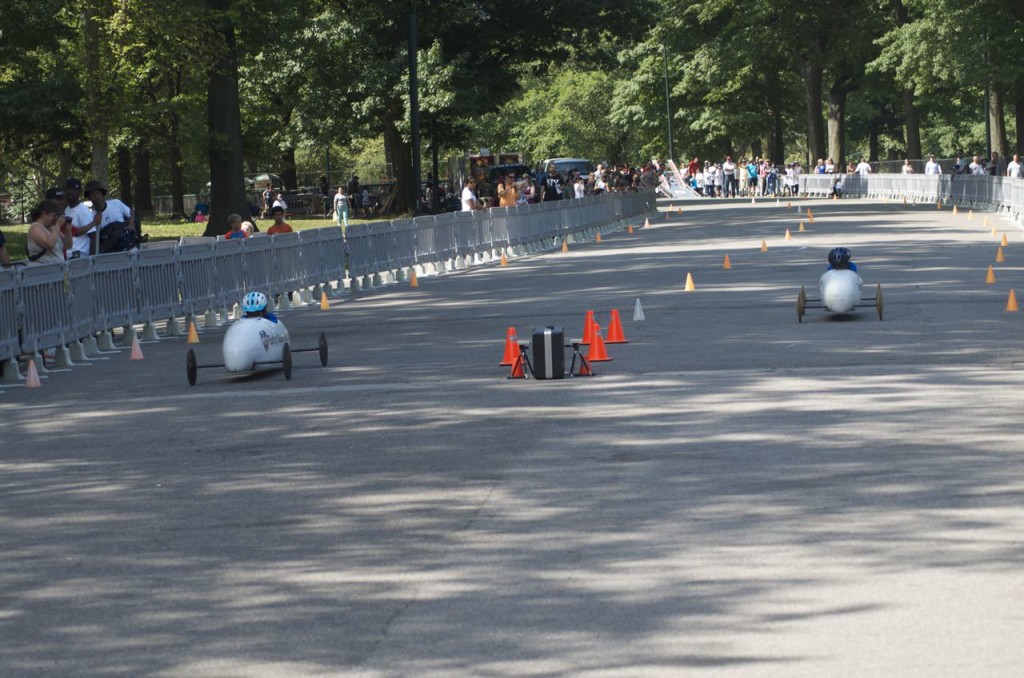 We arrived just as the race was beginning. Actually this was the pre-race event with the cars earning their qualifying time. Most of the participants from the Green Apple Kids arrived around 8:00 AM, though some got there even earlier. This was not a day they were going to miss. 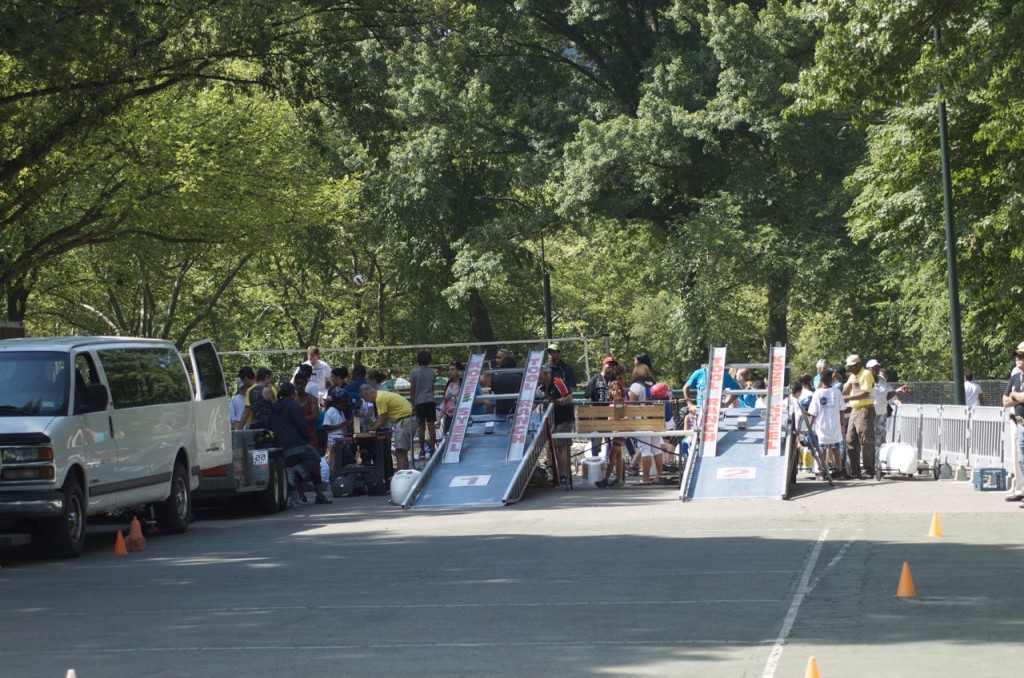 A section of Central Park’s roadway was set aside for the Derby. These vehicles are gravity powered racers and get a kick start from a ramp. Some Soap Box Derbies are held in areas where hilly inclines are used to launch these motor-less cars. The wheels are standardized with precision ball bearings and the body of the cars are built to be as light as possible. 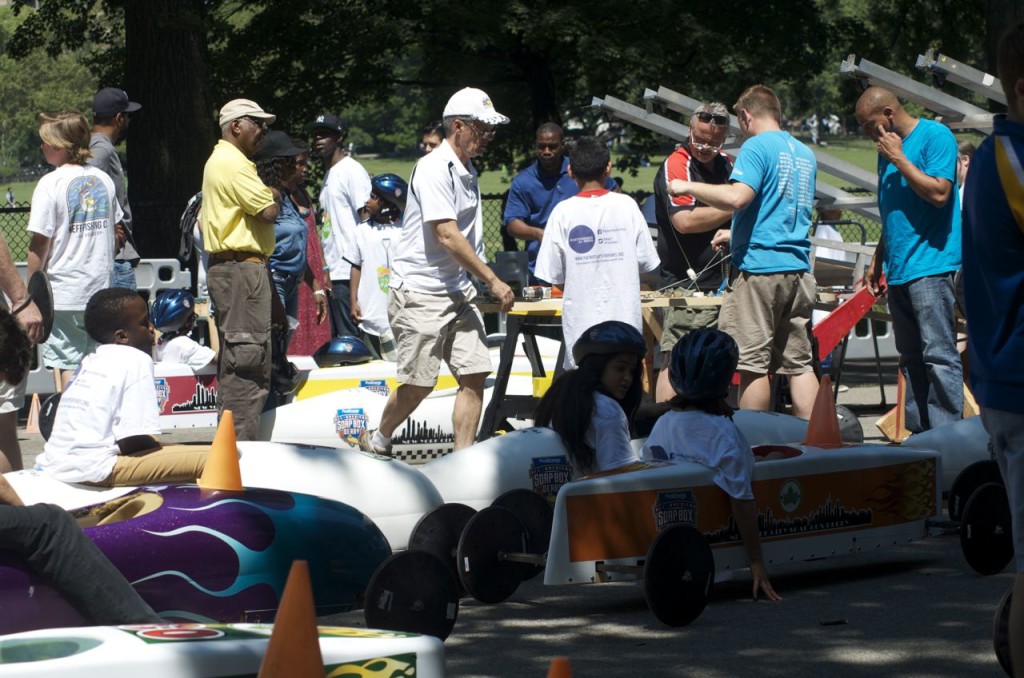 The place was teaming with activity. Many people adjusted and readjusted the mechanics of these racers while the kids patiently sat, watching and waiting for their turn to be pushed up onto the ramp. All participating racers are given instruction on safety and a last minute reminder to keep their heads down to lower the air resistance.

When the first automobile races were beginning to catch the attention of the public back in the early 1900’s, local youths began to build homemade vehicles and staged their own races. It didn’t take long before the motion picture industry a movie in 1914 Kid Auto Races at Venice staring Charlie Chaplin.

The Soap Box Derby had its beginning in 1933 when Myron Scott, a photographer for a Dayton, Ohio newspaper put together an impromptu race for 19 boys. The event was such a resounding success that he arranged an even bigger race, this time with prize money and over 300 participants.

Boys and girls, ages 7 through 13, compete in simplified cars built from kits purchased from the All-American company. The kits come with step by step instructions to assist the Derby novice. For the more advanced Derby enthusiast there is the Super Stock Car division, for kids aged 10 to 17 years old. There is also a Masters division offered for boys and girls, ages 10 through 20, which help them to develop their creativity and design skills.

There is a racing category, Super Kids, for students with special needs. The vehicle in the above photograph was built by local Vietnam Vets in Staten Island NYC with the assistance of the students at PS57.  Each special needs student rides with an experienced student driver in a two-seater car.

Over the years the Soap Box Derby has become so popular that at it’s peak, these Derbies were one of the top five sporting events in terms of attendance. The races have been held continuously since 1933 with the exception of during World War II.

The NYC Soap Box Derby started in 2015 with the assistance of a non-profit along with Flushing Meadows park association and PS 57 Soap Box on Staten Island. The first race was held in Flushing Meadow and the 3 NYC champions of that race were sent to the International races in Akron Ohio at Derby Downs. 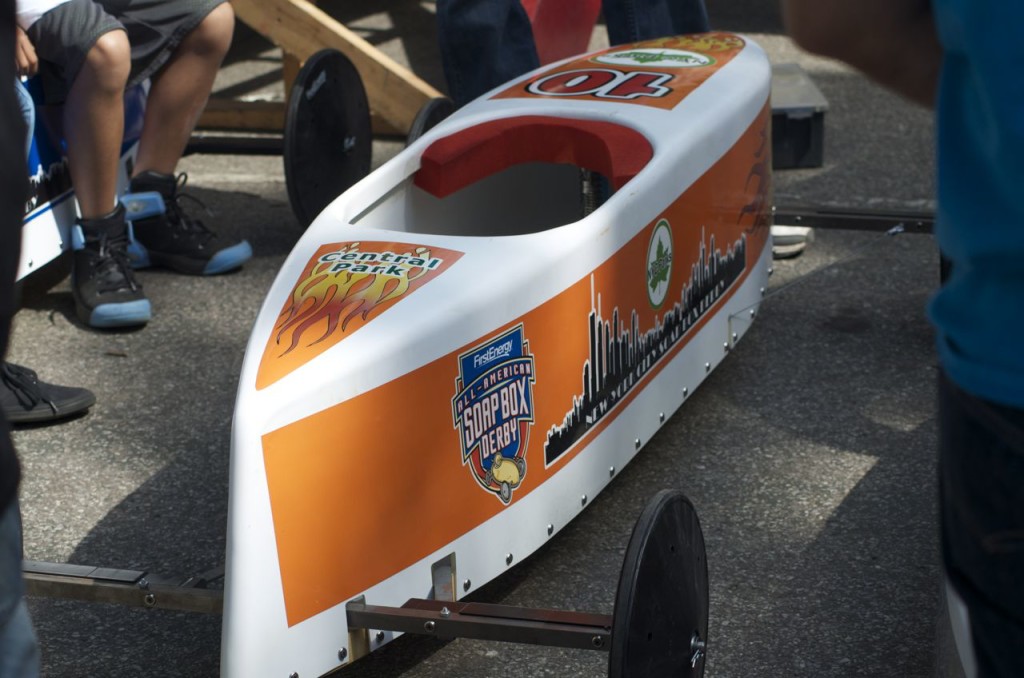 This is the Green Apple Kids Soap Box Car. It’s a super slick looking vehicle with racing flames, the Soap Box Derby logo and a decal of NYC Parks and Recreation. 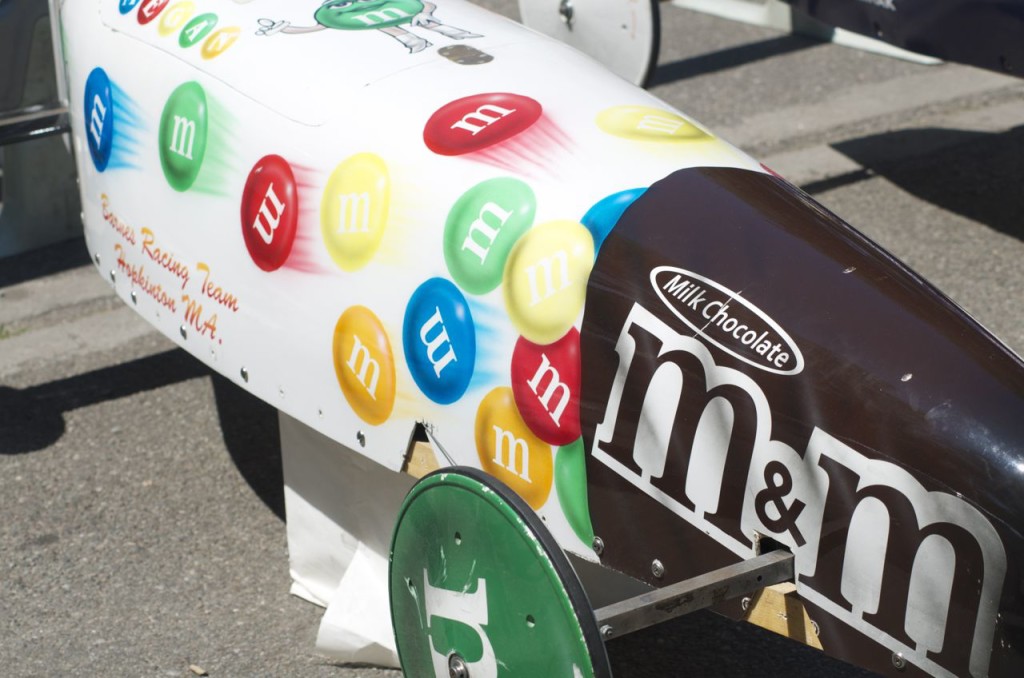 There was one soap box car on display that was decorated with yummy chocolate decals. 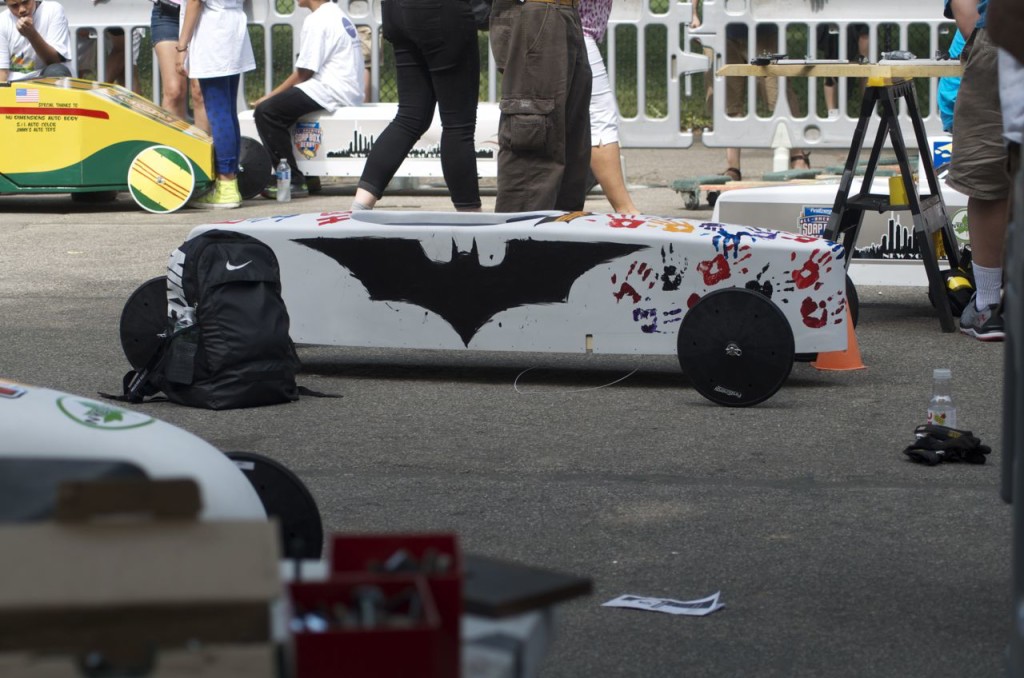 And there was a bat mobile, specially designed by the individual participant. 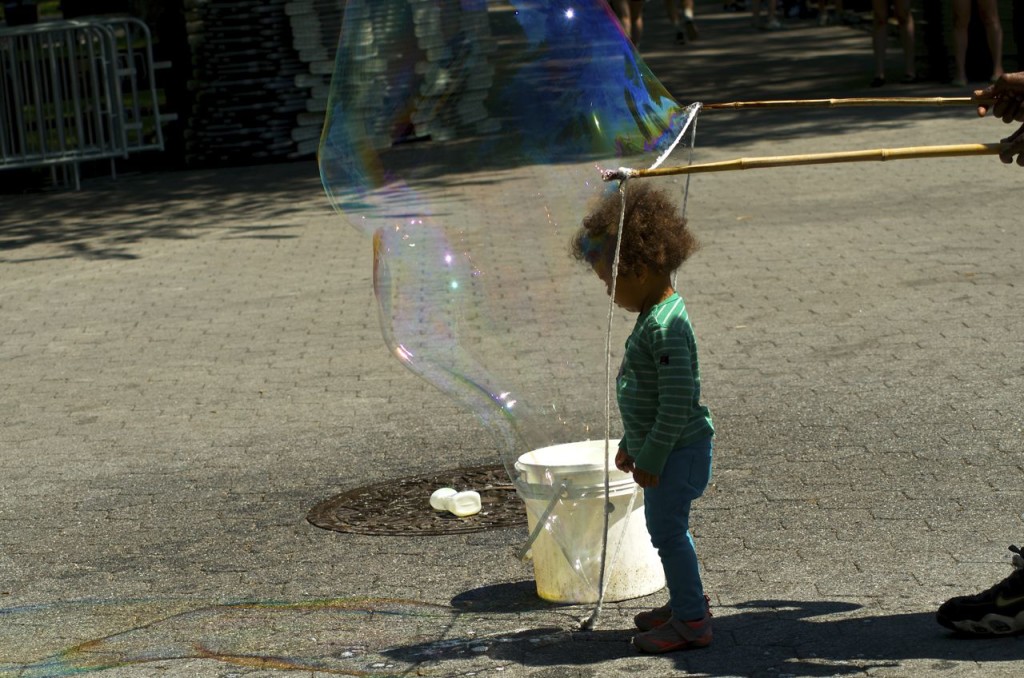 There was a lot of waiting time so I took a little break from the soap box activity and went for a walk with my granddaughter. There is always so much going on in the park that it wasn’t hard to find something interesting to see. We found a man making giant bubbles and I watched as this very patient little lady got to momentarily experience what it was like to stand in a bubble. 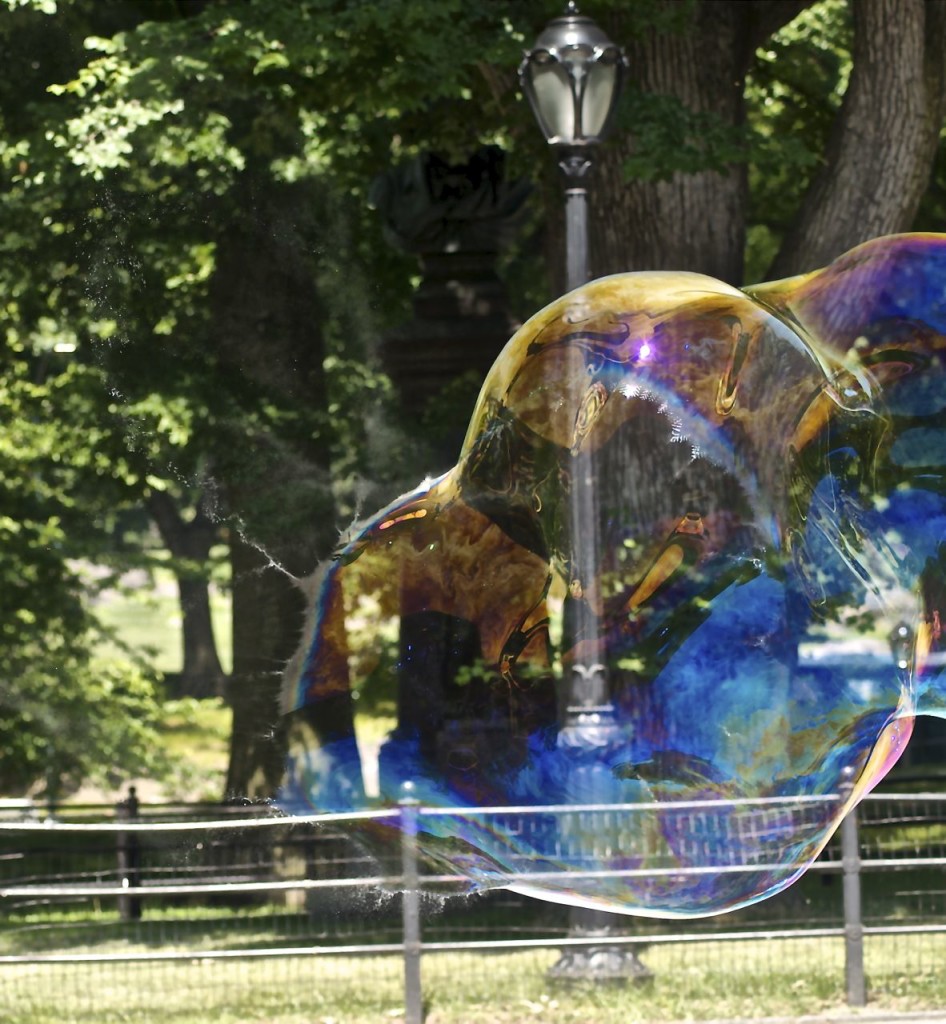 When the bubble burst she was softly doused in a gentle spray of mist. 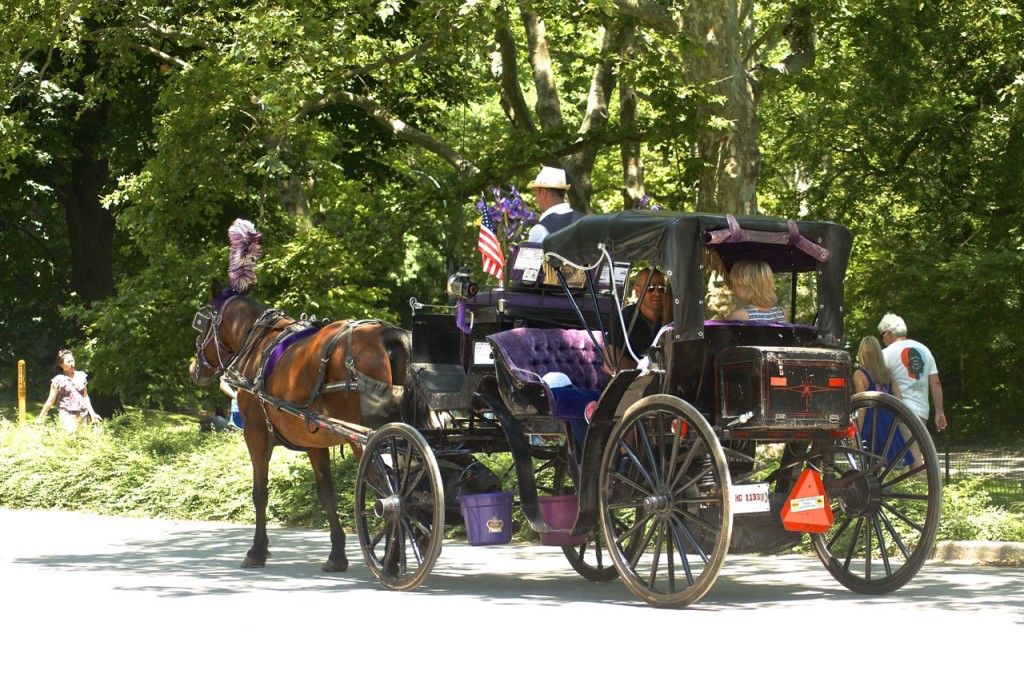 We returned back to the race and once again cheered on the racers.

When it was time to leave we began our walk back to the park entrance at 72nd Street and Central Park West. I suppose we could have taken a carriage ride, a lovely Victorian purple fashioned buggy, though walking is more our style.

As we exited the park we passed the John Lennon memorial. It is located in a lovely shaded area just inside the park and is always mobbed by tourists. It’s a great place to hear street musicians singing old Beatle tunes and perhaps, if you need a button, this vender is more than ready to sell you one.

It was a lovely day in the park. The enthusiasm for the Soap Box Derby was a delight to experience. At the end of the race all the ‘drivers’ would go home with an award of participation. It doesn’t get much more fun than this.