The best times after arriving home from a vacation is when it feels like the trip is lingering and situations keep popping up, reminding you of special moments that occured while you were away. That’s what happened to us the first morning after a seven hour airplane journey home from Spain. We awoke at a respectable hour, feeling refreshed knowing that at some point later in the day the six-hour time difference would eventually catch up with us. But at that moment we were above it all, still in the throes of everything that we had seen, done and tasted. And when we opened the windows, the NYC atmosphere not quite the same as the dry Spanish air, we heard accordion music coming from somewhere below our windows. It sounded like the music we’d heard many times while we walked the streets of Barcelona and Madrid. Musicians were everywhere in Spain. 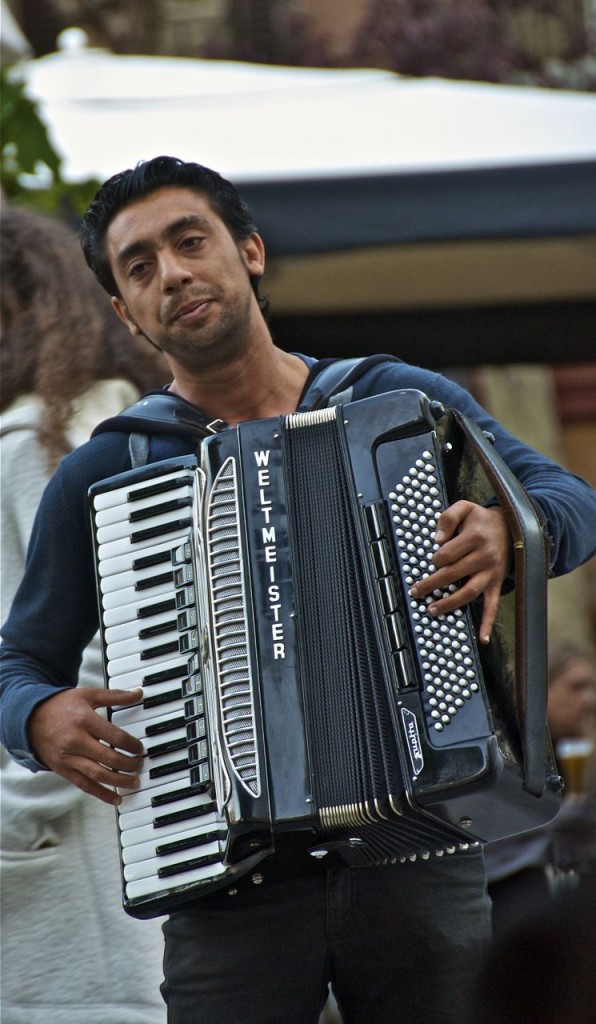 We frequently saw this man playing his accordion in the square where we sat in the evenings drinking wine and eating tapas. He played classic Spanish music as well as contemporary tunes. When he finished he’d bow and pass around a basket for spare-change. What a delight to hear this music first thing in the morning on our return trip home, and though we knew it was not our old friend in Spain, it was still fun to pretend that we had not just yet left our vacation behind. And as it turned out, the music was coming from a block party that been had set up earlier that morning and they’d just turned on the sound system and we loved the coincidence that it sounded like the music we’d heard in Spain. 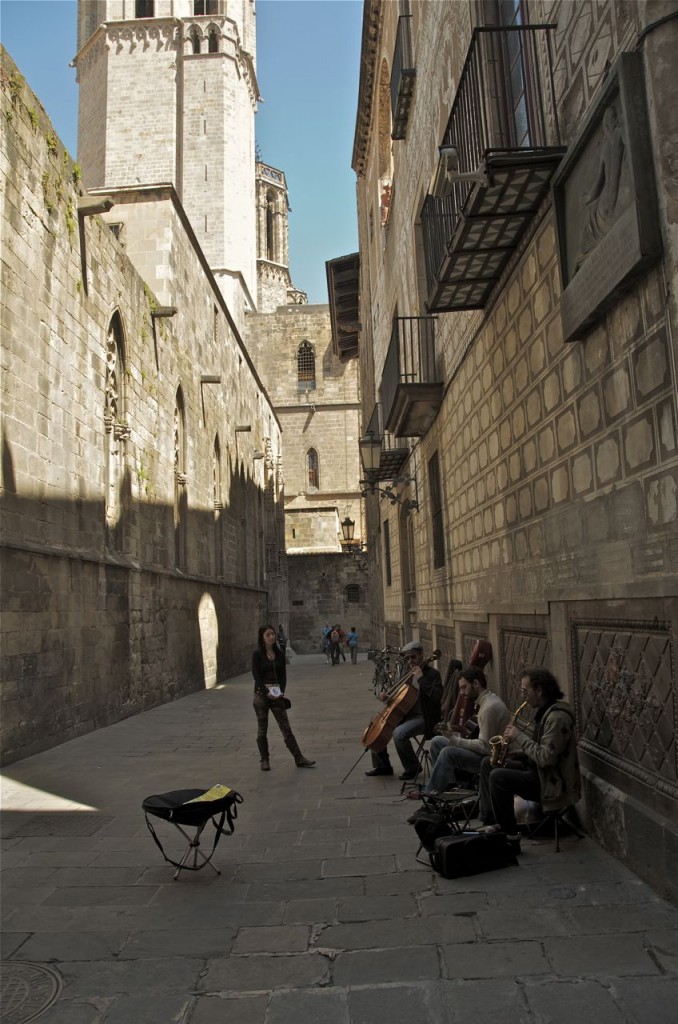 My husband and I sipped our coffees, listened to the clamber of the street fair getting underway below our window, and reminisced about the music we’d heard on our vacation. This is a photo of my husband’s favorite trio. They were extremely professional sounding and it was easy to hear that they’d frequently played together. They had the most wonderful location, perhaps the best in all of Barcelona to get the most from the acoustics of the buildings in the area. We could hear them playing as we walked along the narrow, shaded streets and we followed the sound, like children following crumbs from cookies, looking for the big treat. When we turned a corner there they were, behind Bacilica Santa Maria, their backs to a heavy wall with the music perfectly reverberating along those mysteriously shadowy walkways. 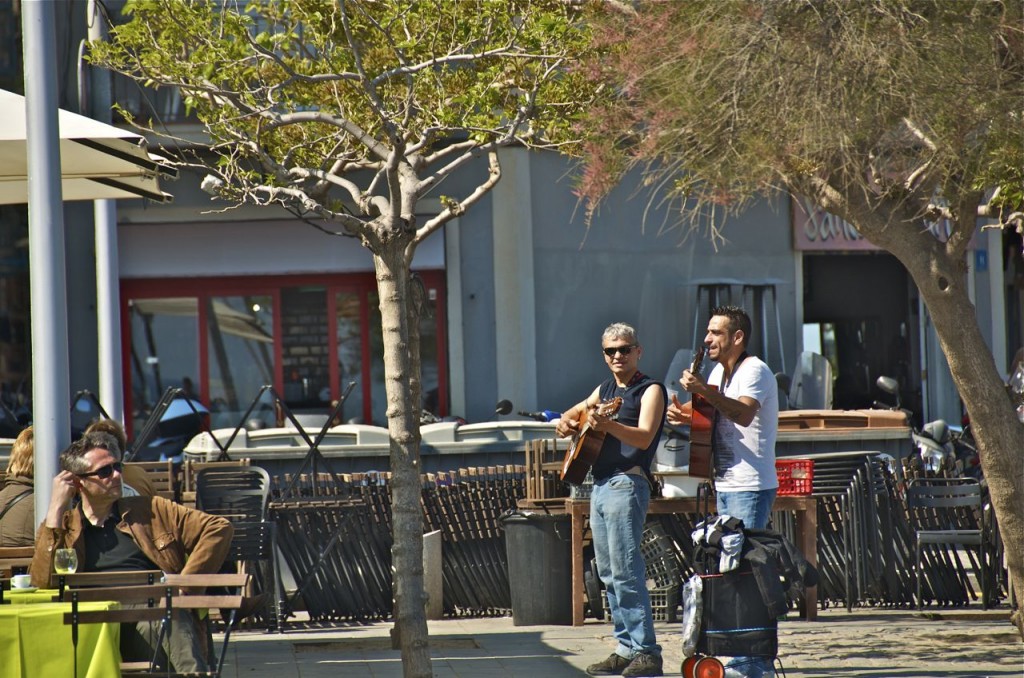 This duo had perhaps the prettiest location to preform in all of Barcelona. They walked along the boardwalk that butted up against a beach and the Mediterranean. They played quite well, and smiled constantly. I know that being a street musician can be a hard and frustrating life, performing for a fickle audience, never knowing just how much they will bring home after a long day of working. 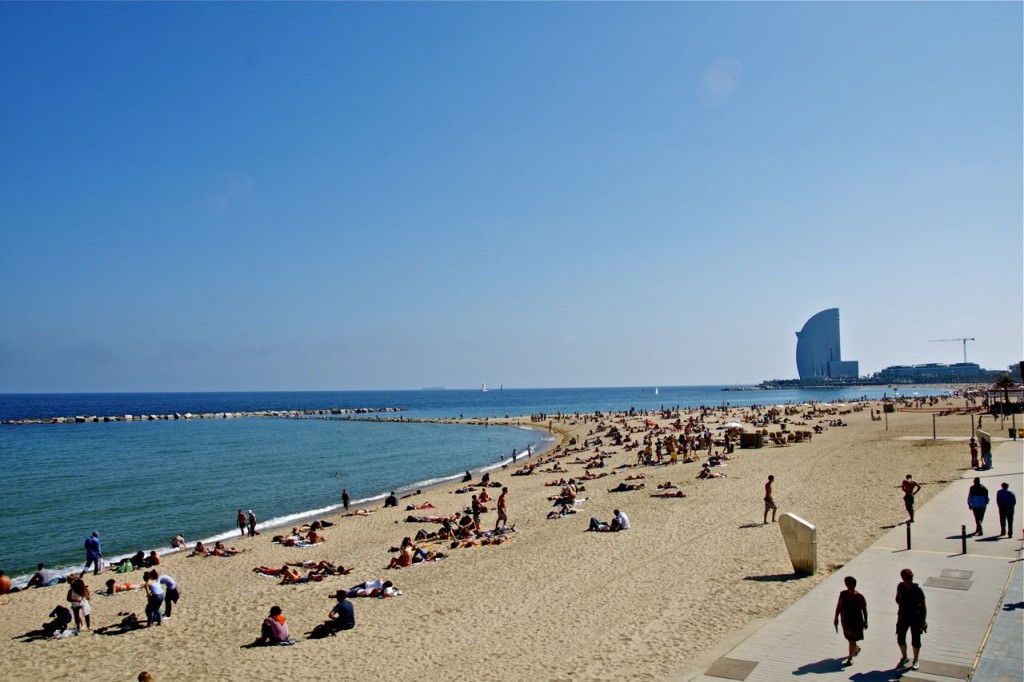 But, this is the environment that these two musicians worked in. The restaurants along the walkway are filled with relaxed vacationers drugged by the sun, the lulling of the water softly lapping against the sandy shore, and the magic of Spain beckoning everyone to go slow, enjoy life. I know this is a romanic view, but after all I was on vacation and I had fellen under the Spanish spell.

One morning on one of our walks I couldn’t stop watching this guitar player as he strummed and sang in the shadows of a plaza in Barcelona. At first I did not know why I found him so compelling. I took quite a few photos, different angles, in bright sun, in the deeper shadows, and then I realized he looked like the lithograph of a folksinger that had been a wedding gift in my first marriage. For a few moments I was thrown back in time, to the early ’60’s, when I was too young to grasp what a lifetime of memories would look like. Brushing up against my past unexpectedly in Spain made me smile and appreciate all the more what I now had, a loving husband who appreciated who I was, healthy happy adult children, a delightful grandchild and I was in Spain. 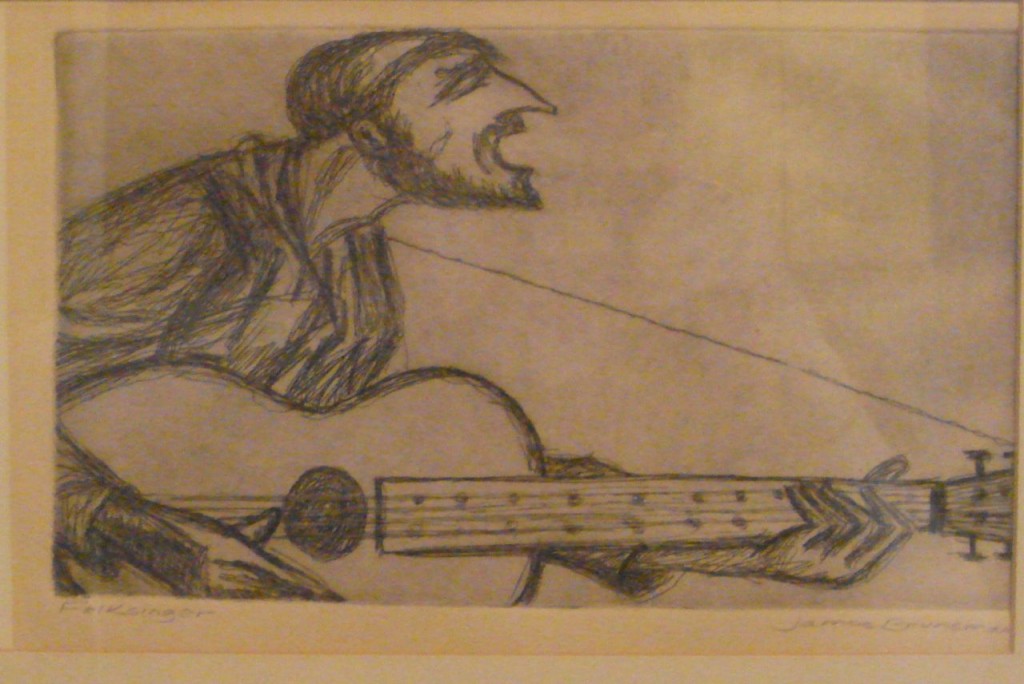 I’ll leave it for you to decide if this photo of the lithograph of the folksinger looks like the fellow I saw in the dappled shade of Barcelona. Several years ago I returned the old wedding gift to my ex and he gave it to his brother who had always coveted the picture. 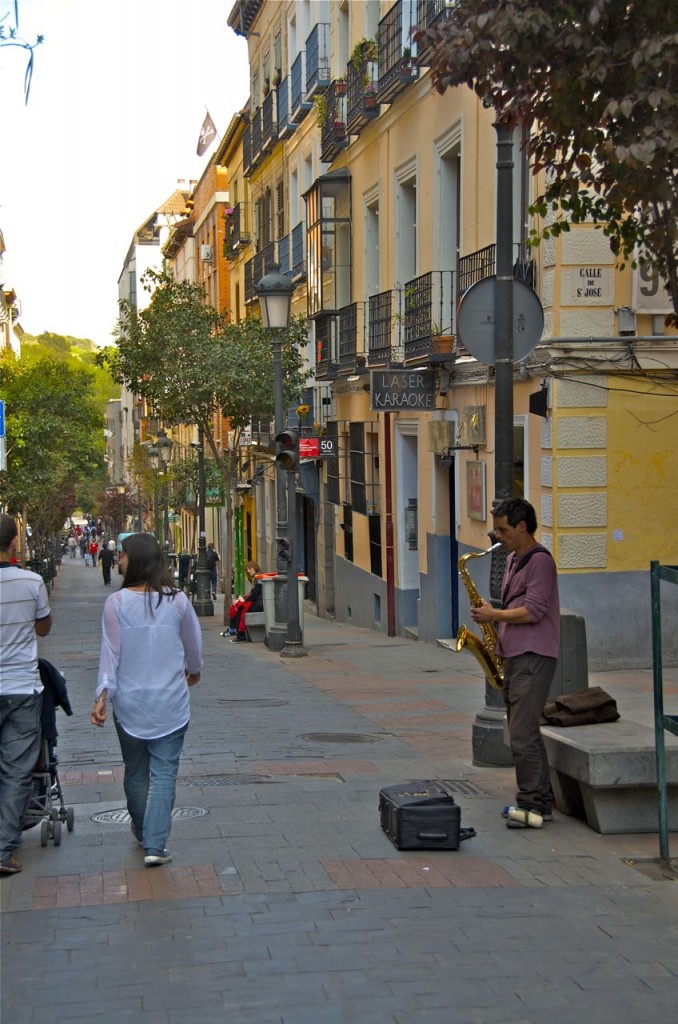 The Spanish evening light is wonderful for strolling. The sun does not set until after 8:30. This Saxophone player had set himself up to entertain the evening walkers and he had his own rhythm section, a rock-filled plastic bottle that he’d fastened to his foot. 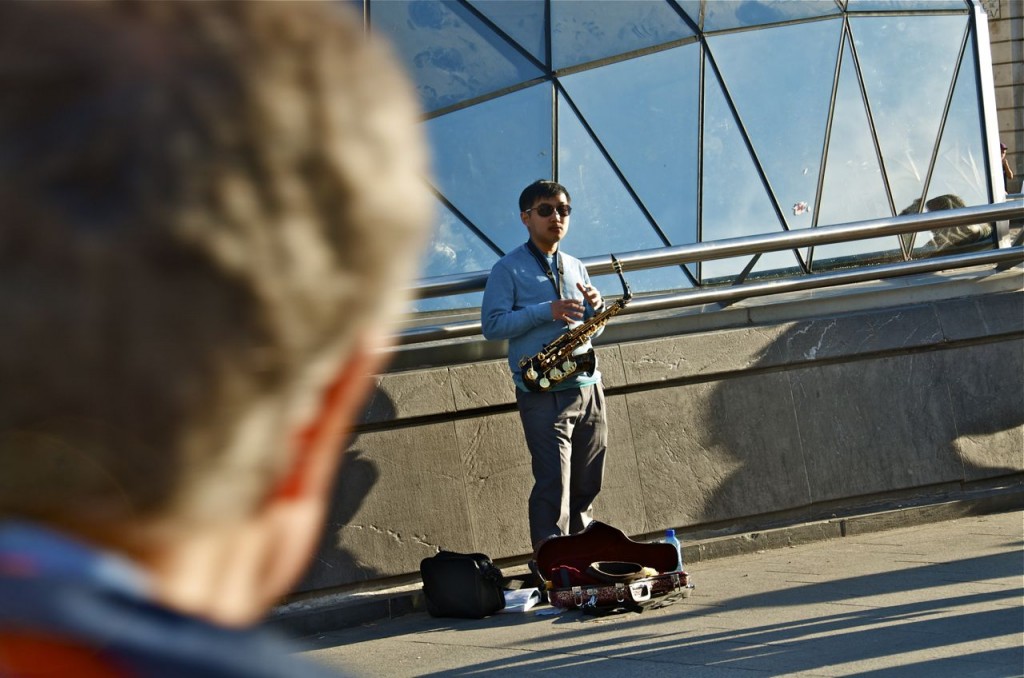 This was the worst musician I had ever heard, anywhere!! He couldn’t hold a note, there was no tune, and yet, he continued to play as though he were as good as any other street musician. There were a few coins in his upturned hat, but I believe that either he had put them there, or someone dropped the money into the hat hoping he’d move on and make his noise some where else. 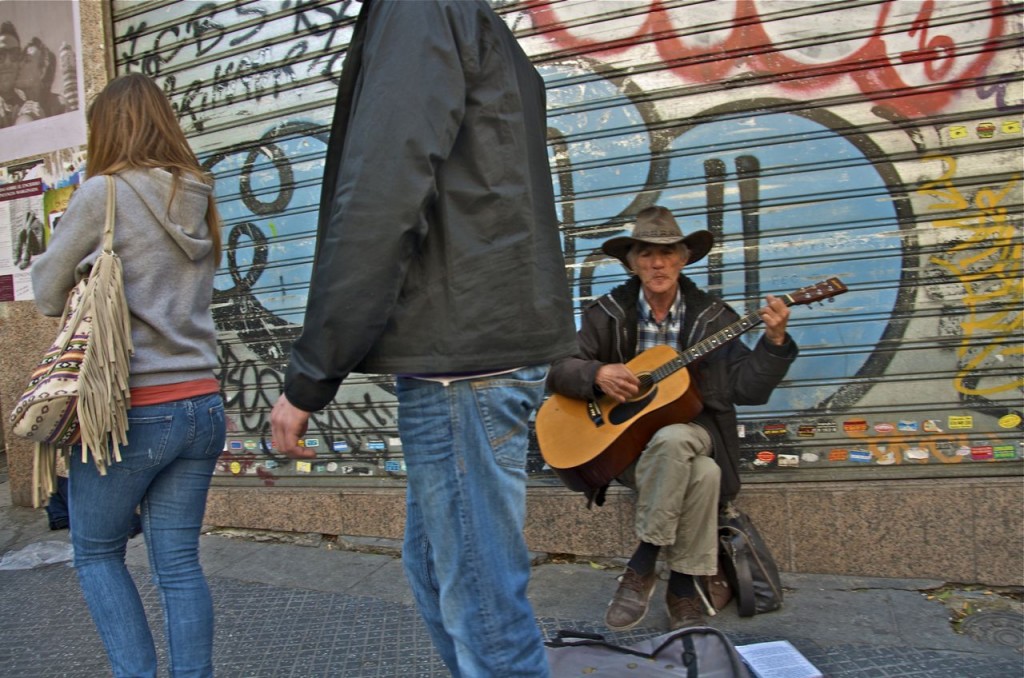 There were lots of guitar players on the street in Spain. Some very young and some not so young. This guy played quite well and though he didn’t grab the attention of many passersby, he softly and easily played his guitar and rarely looked up from the street. 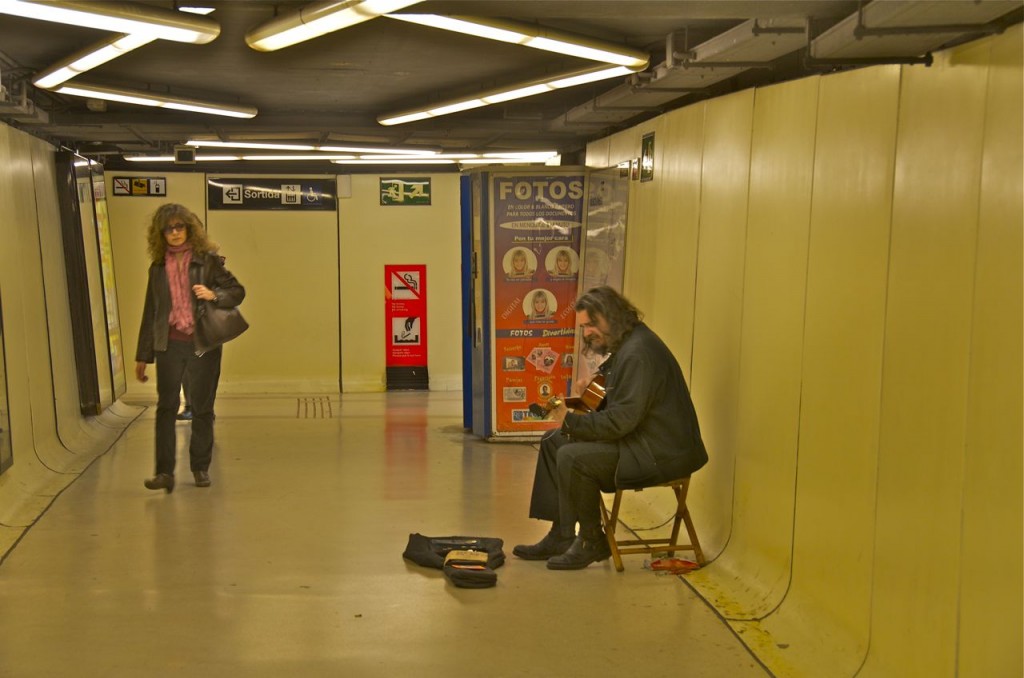 The subways are always a good place to set up a performance station. This guy played quite well, but it was the weekend and not many people were hurrying off to work, and he was left with the few stragglers traveling underground. 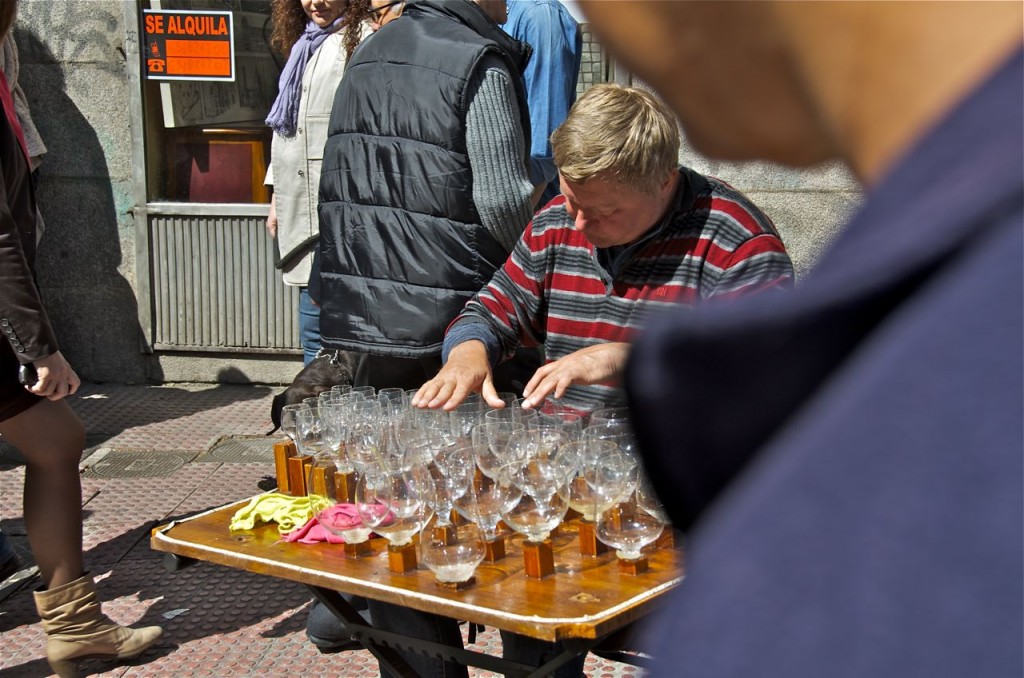 And here is a guy who played expertly on crystal glasses. 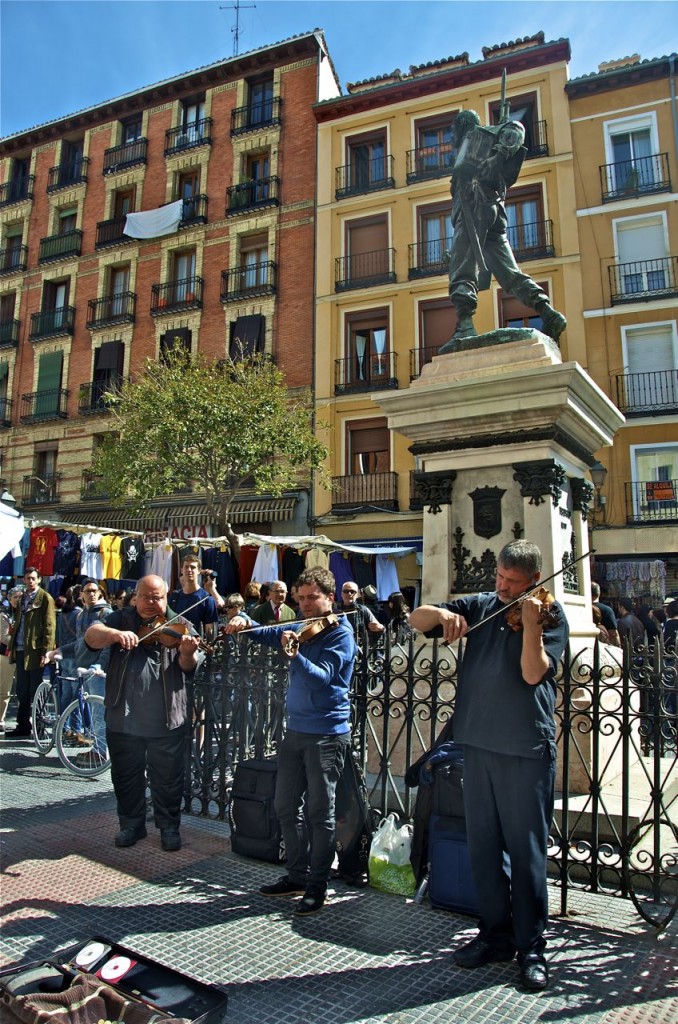 I particularly enjoy these musicians who performed beautiful classical pieces. These three set up their makeshift stage in the middle of a very busy street fair. The crowd was pushing and shoving, shoulder to shoulder in all directions but everyone stopped for a while as they passed these violinists, to watch and listen, clogging the pathway, and then they’d move on to check out the merchandise in the stalls up the street. 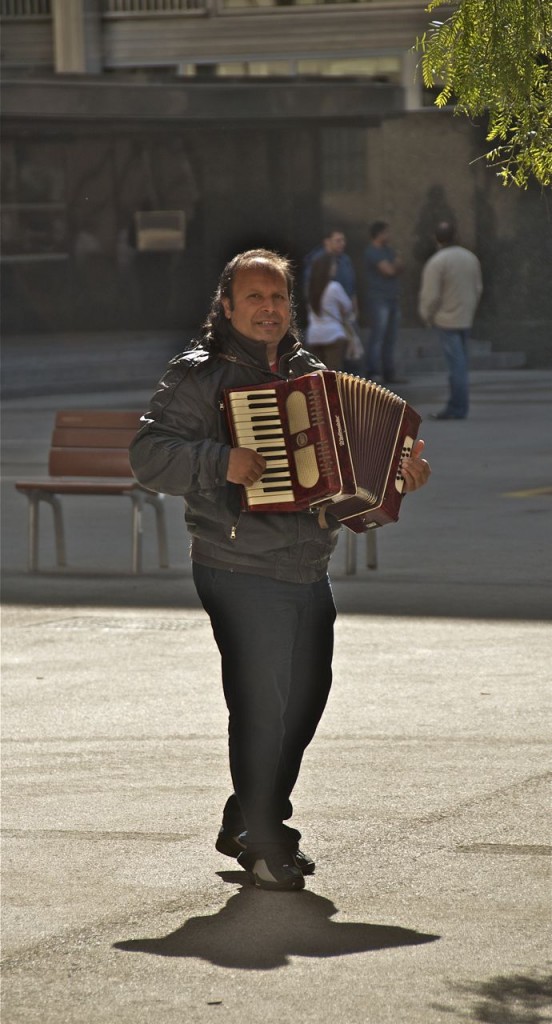 We finished our coffee, ate a piece of fruit, and while the music continued to play outside our window my husband asked when we should start to unpack. We both know that the vacation is over once we open the suitcases, drag out the dirty t-shirts and figure out what needs washing and what can go back into the drawers. Instead of lifting the suitcases onto the bed and milling through the debris of our travels, we decided to take a walk, sit in an outdoor cafe and stretch out the vacation for a little while longer.

7 comments for “STREET ENTERTAINMENT AND OTHER MOMENTS REMEMBERED”