We’re now in Madrid and so far from everything that we’ve seen and done, I’ll have enough material to blog for a long time. The experiences just keep coming, with something delightfully unexpected  happening nearly every time we turn a corner. For one thing the street theater in both Barcelona and Madrid was a surprise. It seems that dressing up in some major sculpted costume is a serious vocation in Spain. I don’t know if it happens in other countries, but I haven’t seen any thing like it in NYC. 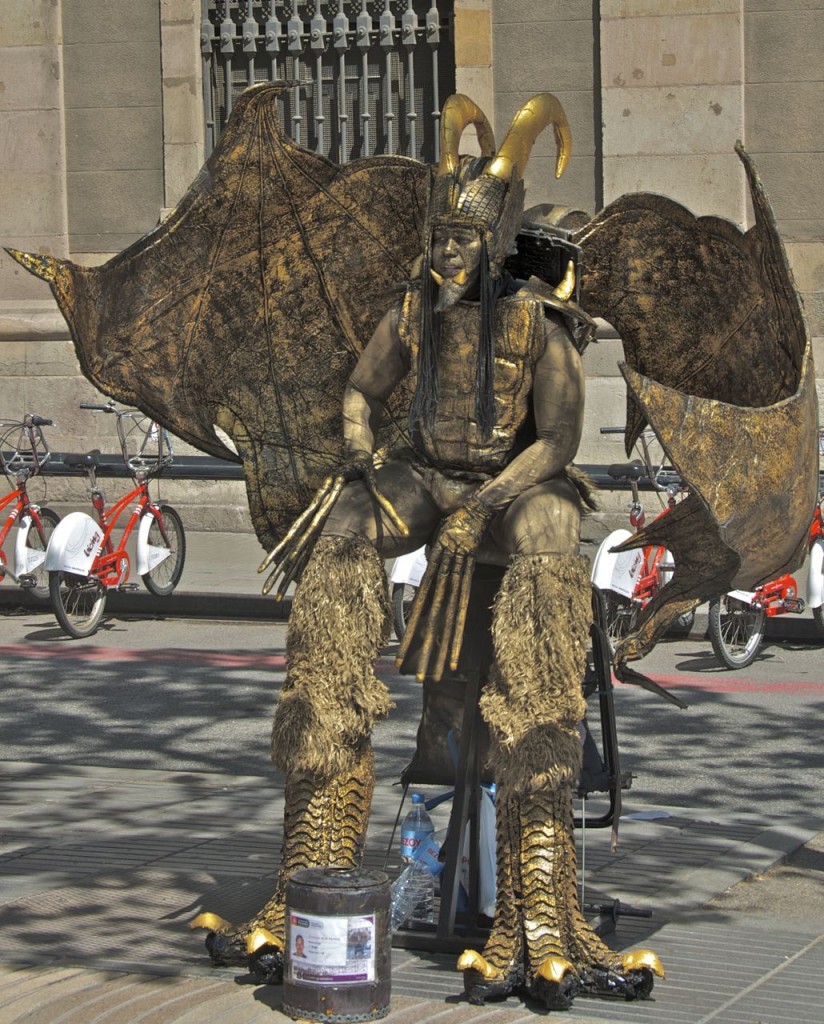 In Barcelona we had our first encounter with Spanish street theater, a huge gargoyle sitting on the street with a bucket for donations next to his extraordinary scaly golden feet. The bucket had his picture and an id number so I assume he was a registered street performer.  For a euro or two he’d let you to take a photo of him attempting to eat a friend or loved one. He really was a vicious looking creature and fun to watch. 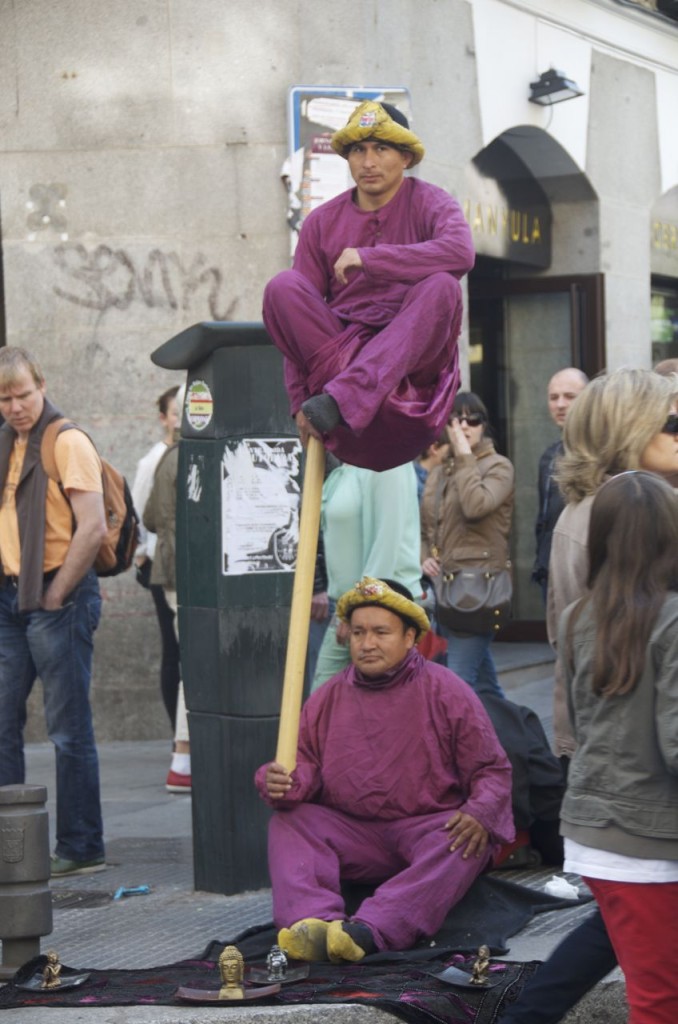 I had seen photos of this kind of street theater, but I’d never seen it in person. These guys were sitting in this position near a huge street fair in Madrid. We walked passed them at around 11:00 AM as we made our way into the fair, and when we were finished shopping and returning to our hotel around 2:00 PM, they were just dismantling their act. I could see the metal bars and the other pieces of this act’s apparatus that allowed such a fantastic looking feat, a long metal pole, a platform for the guy to sit on and a kind of straight jacket that hooked to the pole. Undressed the act looked like a plumbers bunch of tools and equipment, but when done right, really quite impressive. 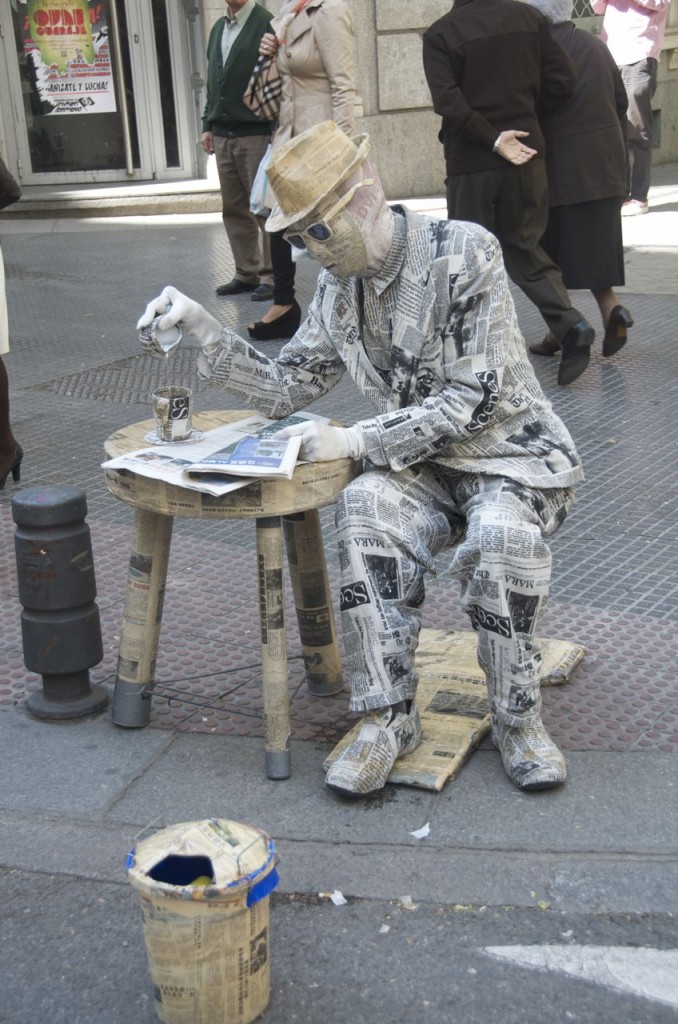 This guy sits around all day in a newspaper suit reading a newspaper while continuously pouring water into a newspaper tea cup. He’s even wearing a newspaper hat and a pair of newspaper shoes. I never got to see what he did if someone dropped a coin into his newspaper bucket. But he will sit in this way for hours and hours, not moving a muscle. 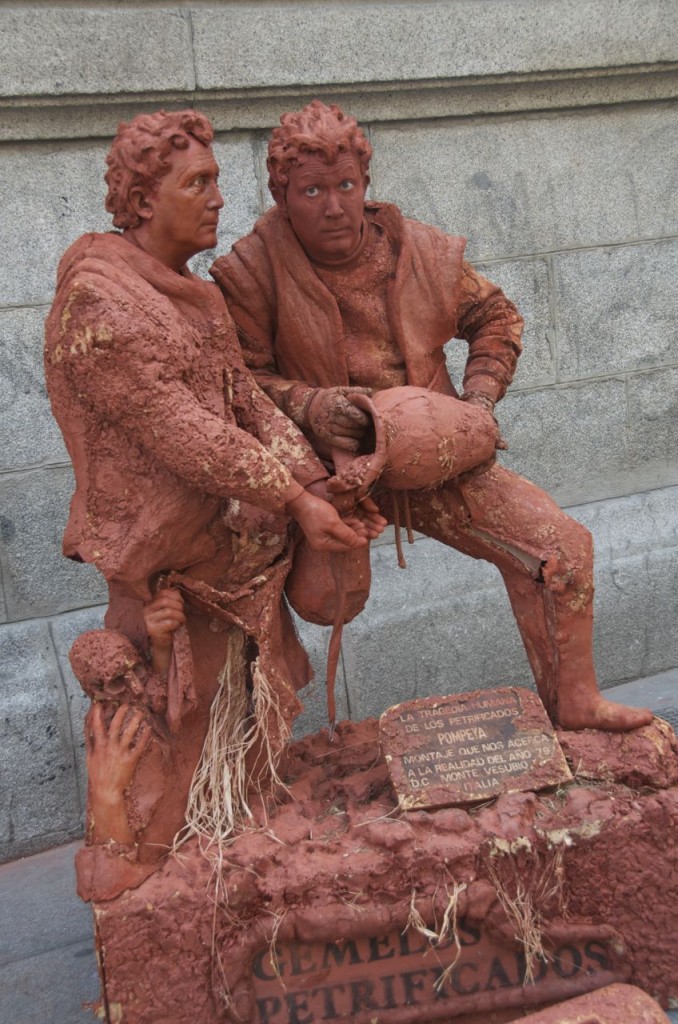 I found this human statue the most interesting. It looks like there are two men in this statue but there is only one live man, the other is a real statue, but they have the same face. The terra-cotta color, the structure and the bizarre theme was quite compelling because when a coin was dropped into the bucket, the real man opened his eyes big and wide, staring directly at the audience. He stood in this same position for hours waiting for the passersby to contribute to his theatrical efforts. 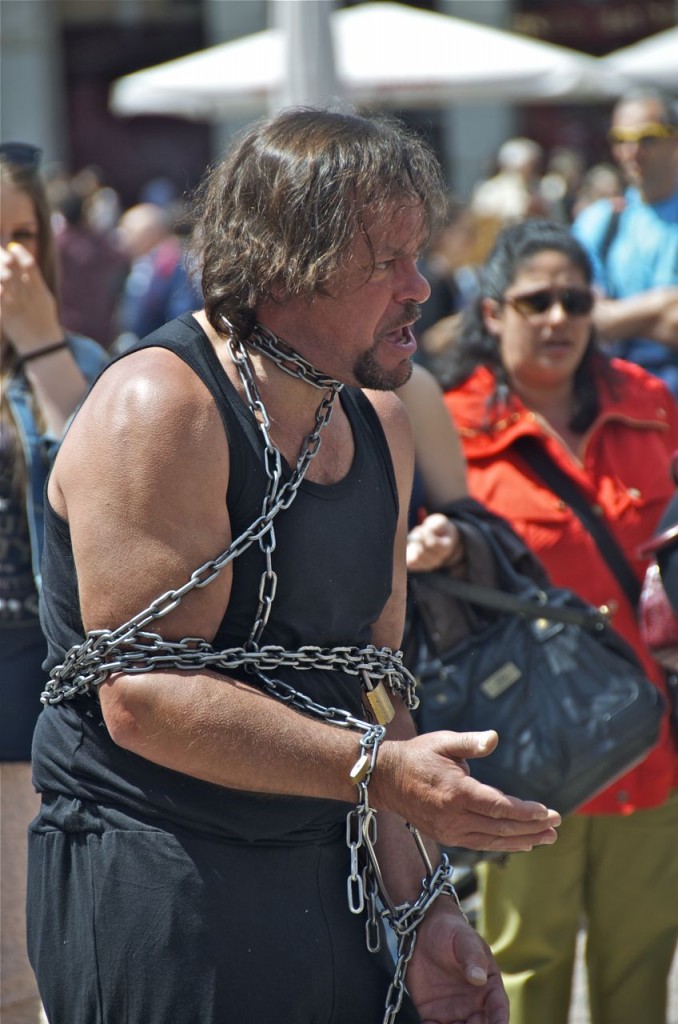 There are other kinds of street entertainment in Spain besides the human statues. This man reminded me of Anthony Quinn in his performance in Felini’s movie, Le Strada, about an aging strong man in a broken down traveling circus. But this guy, rather than breaking the chains, wiggled out of them like Houdini might have done. 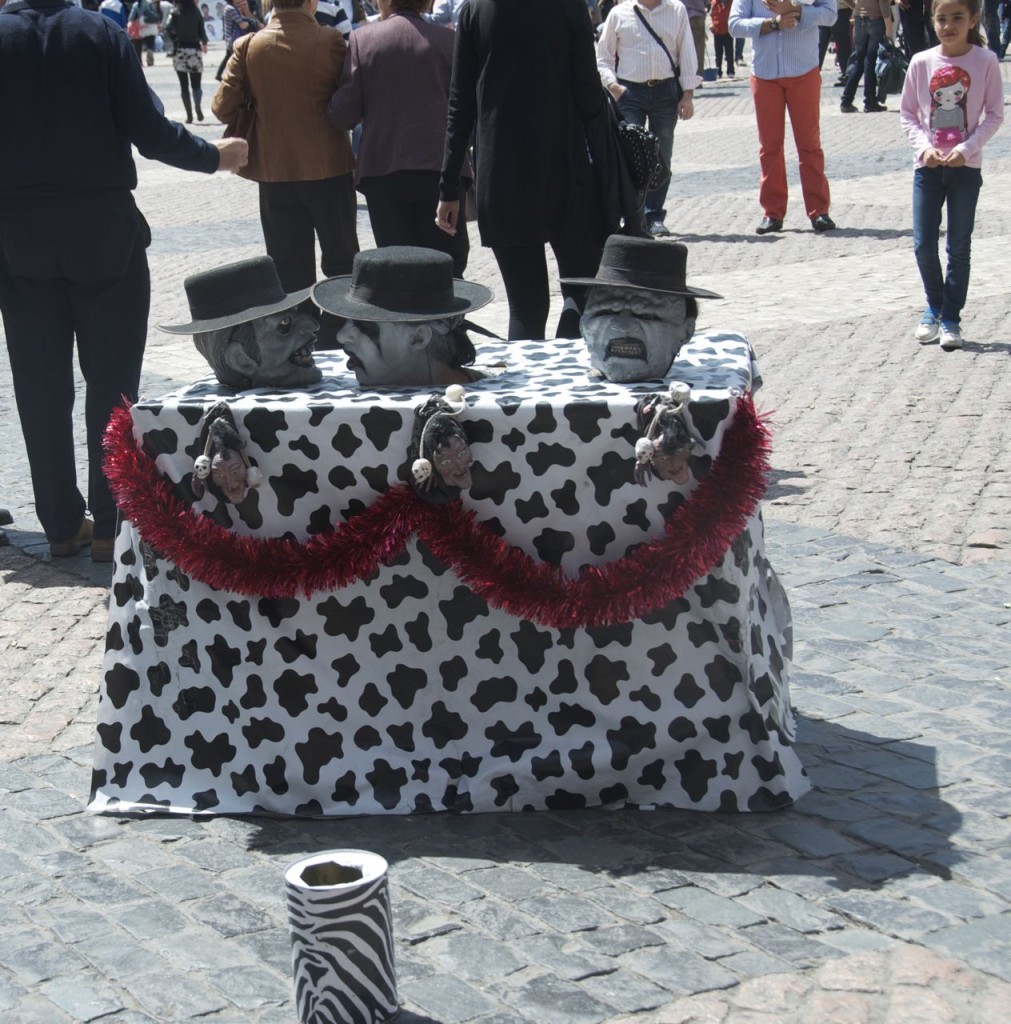 I saw this kind of street theater several times. There is only one real person in this act, the head in the middle, and he controls the other two heads that are attached to sticks. The heads yammer or appear to argue until an unsuspecting tourist or a pretty young woman in a skimpy top and tight pants walks by and one of the seemingly bodiless heads lurches out at them. The startled victim either shrieks or dramatically jumps out of the way and everyone in the area laughs and has a great time and drops a few coins into the money bucket. The little girl in the upper right hand portion of this photo has been watching from afar and she’s coming down for a closer look. They’re not going to be able to trick her but she’ll giggle and laugh with the rest of the crowd when a head pops up and tries to take a bite out of the innocent. 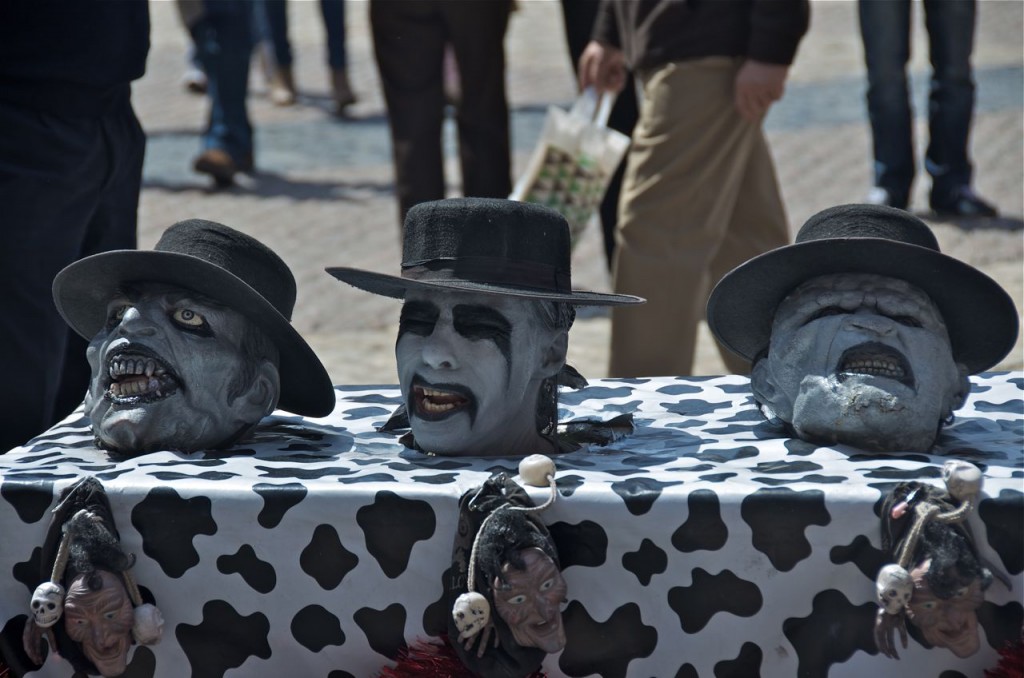 This is what these guys look like up close. Not a pretty sight but very entertaining. 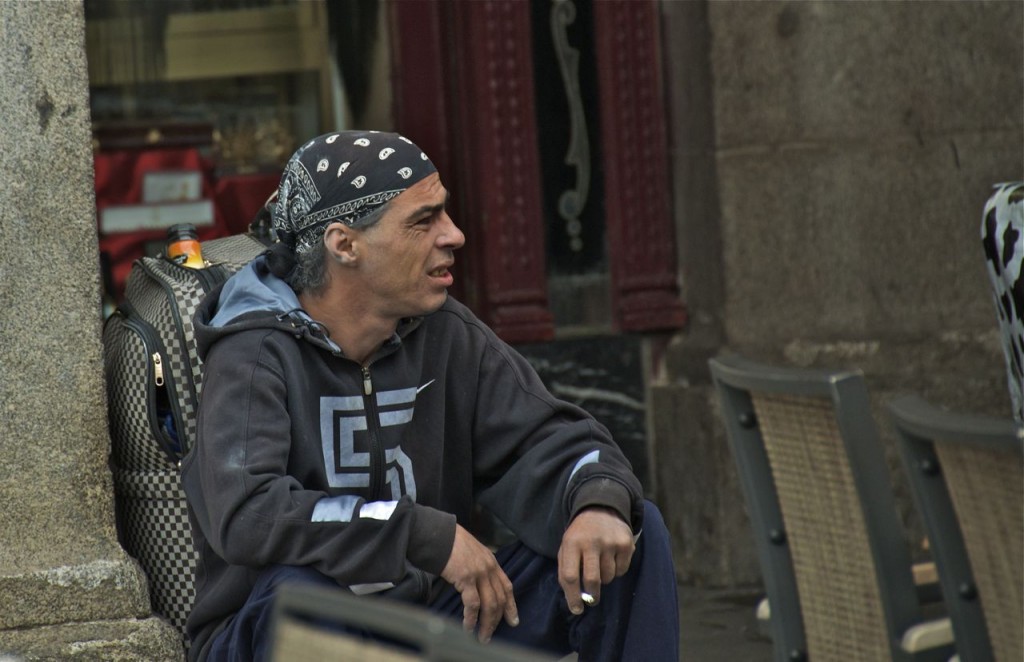 Do you recognize this guy? The next day I walked passed the area where that ugly trio of heads had been entertaining the crowds on the corner of the plaza, and here he, the orchestrator of that comedic act, sitting next to his gear, watching the people milling into the area. He still has to costume-up, but this is after all, Spain, so he will smoke that cigarette and then probably grab an espresso before starting his day on stage.

I had hoped to get a photo of an act preparing for a performance and then while we were walking along Paseo del Prada heading for the Botanical Garden early one morning we saw this strange configuration of what appeared to be two human figures moving about under a large canvas bag. I had seen this one time before but it was too early in our trip to know what was going on. This time I got it. It was a street theater person, perhaps two people, preparing for a performance. What a great find for a photographer, and don’t you love the Spanish sun making such lovely shadows on the street. But I still wonder what this act might have been, and though we waited for a while to see if someone would appear from under that coverlet, we eventually hurried on into the garden and never did see what kind of street art this scene might have metamorphosed into.

← A SMALL TAPAS TASTING
STREET ENTERTAINMENT AND OTHER MOMENTS REMEMBERED →