If this blog post seems confused and jumbled, blame it on the beastly hot New York summer weather. My brain feels like it’s been simmered medium rare inside my skull this last week with the constant 95 + degree temperatures. During the heatwave I ventured out into the blistering sun and smothering humid weather to do errands, but I only did this to keep the household running smoothly. If I’d done what my mind and body told me to do, I would have stayed in our air conditioned apartment, nose in a book or working on the revision of my novel in progress drinking iced coffee all day. But I rushed to the drugstore, picked up a prescription, and then quickly walked several blocks to the supermarket where I linger longer than usual in the frozen food section. The post office up the street is a real treat because this place is so cold that it feels like I’m in an icebox when I stand in line waiting to purchase postage stamps.

I didn’t write this blog post to complain about the hot summer weather. I wanted to write a short post about not cooking. I wanted to write something praising salads!! Or any meal that can be prepared without cooking. In this summer heat I only want to use canned or precooked foods. There is no shame in opening a can of black beans, adding a diced mango, drizzle on a salad dressing, served with a roasted chicken purchased from the grocery store and call this dinner. Or raw corn cut from the cob, thinly sliced tomatoes, a few chopped olives, some shredded chicken breast from the leftover roasted bird served the night before, a couple tablespoons of salad dressing and shamelessly I’m serving another easy uncooked dinner. That’s right, if I can get away with it, I don’t cook anything in the hot weather. 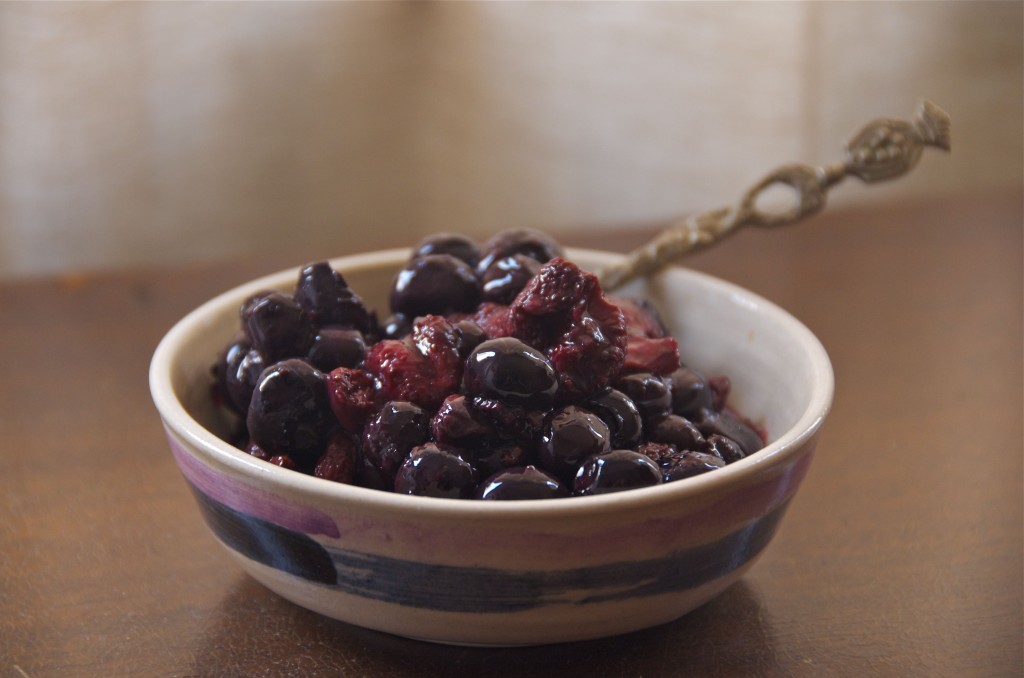 The other day at the farmer’s market, just before the hot spell hit, I bought a large batch of strawberries and blueberries. They’re at their tastiest in July and I intended to make jam. But the weather turned so hot in the afternoon that there was no way I was going to turn on the stove. So, I did the next best thing. I made an egg cream and decided to wait until the following day. Perhaps tomorrow would be cooler I thought. But the forecast was for even hotter temperatures in the coming days. So, early that next morning I dumped the fruit into a roasting pan. I added no sugar and covered the pan completely with plastic wrap and set it out on the terrace to let the sun cook the fruit. I left it there all day and then in the evening when I brought it back into the kitchen, the berries were turned into a wonderful fruit compote. It tastes as good as any concotion I could have made on the stove. We spread it on toast, add it to ice cream and instead of fresh fruit, we dollop a tablespoon or two on top of our morning bowl of cold cereal. And it certainly is yummy served with plain Greek yogurt. 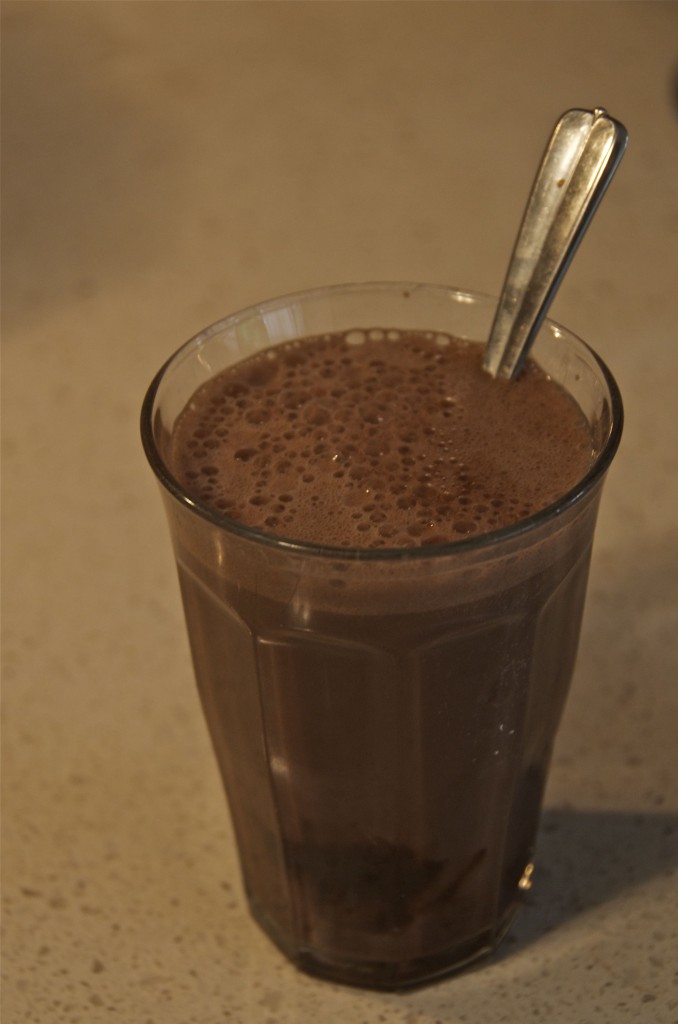 I mentioned egg creams earlier. This yummy drink has a special place in my heart and I not only associate this beverage with summer but it also reminds me of the young, fun-loving New Yorker who became my husband. He introduced me to this drink in the early days of our courtship. We met quite a while ago, but each time I make one of these refreshing concoctions I remember how he carefully demonstrated the process of making the perfect egg cream.

He took a large glass from the cupboard, and then lined up three ingredients on the kitchen counter; first came the store bought chocolate syrup, then the milk and finally an icy cold bottle of plain seltzer. He measured approximately two tablespoons of the chocolate syrup into the the glass. Next he added about one-half cup of milk and stirred the mixture until he’d made a yummy looking dark chocolate milk. Seltzer was then poured to within two inches of the top of the glass. The mixture bubbled up and a lovely frothy foam sat atop of the beverage. He handed me the glass. I took a couple of swallows and I wonder sometimes if he gave me a love potion that day, because as he stood waiting for my response, his smile, the charming look in his soft silky, brown eyes, and his eagerness to please me proved more than I could resist and I do believe I fell in love with him that day.

Egg creams have been a long standing favorite New York City fountain drink. But these days there are few places that serve them, and their preparation have become a lost art. It’s a creamy-chocolatey drink with a spark and slight tang from the seltzer that makes the beverage so unique. There were several attempts to bottle the beverage, but none were successful.

There are a of couple stories regarding the origin of the egg cream. One tale tells of this yummy drink getting its start in the late 1800’s on the Lower East Side of NYC and is strongly associated with a Yiddish-theater star Boris Thomashevsky. The young actor had spent time in Paris where he tasted a drink called “chocolate et creme” and he asked to have one made in New York.

Another story about the creation of the egg cream has the drink created in the early 1900s by a Jewish candy shop owner, Louis Auster, who immigrated to America and set up his place of business in Brooklyn, New York.

When I moved to the East Coast over 30 years ago there were hundreds of candy stores throughout the neighborhoods in NYC that still served egg creams. But I don’t know of any place today where I can get this refreshing beverage. So, I make my own. This drink usually has between 100 to 120 calories per glass (depending on the type of chocolate syrup and milk) and yet the egg cream fulfills a yearning for something chocolate while at the same time imparting just enough of a zing from the seltzer to make it a refreshing treat.

An egg cream contains neither eggs or cream and it is not a drink to be sipped, but because the beverage quickly loses it’s effervescence, the best way to drink an egg cream is in four or five lovely chugs.

Whether I’m drinking an egg cream or constructing one of my uncooked dinners, at one point, no matter how yummy the beverage or the salad, I long for cooler temperatures and perhaps a little rain to soften the blistering sunshine.

I would love to hear how you beat the cooking blues in the summer.

← LOST IN TOLEDO, SPAIN
AN ORDINARY DAY WITH AN EXTRAORDINARY TWIST →