It was a warmer than usual November afternoon when I exited the L Train subway station at 1st Ave and 14th Street where I was to meet up with Susan. We planned to walk to China Town where we were going to attend an event sponsored by ICP  (International Center of Photography). We were going to participate in a Weegee Walk through Chinatown and Little Italy.

Some of you may recognize the name Weegee. For other’s it might be the first time you’ve heard of him. Though I would venture a guess that many of you have seen his photos. He was a press/news photographer in the 30s and 40s who pretty much invented the term ‘freelance photographer’. His photography book “Naked City” was the inspiration for the 1947 movie “The Naked City” and in 1992 Universal Studios released “The Public Eye” a film about Weegee staring Joe Pesci.

I had arrived at our meeting place a little early. The interesting thing about NYC is that there’s always something going on. So I settled down to take-in the happenings. I watched a panhandler work a crowd of tourists as they got off the crosstown bus. Persistent and pitifully dressed, the panhandler followed the group, begging all the while, until finally one of the women reached into her handbag and gave him a bit of change. A mother and four young boys, two who looked as if they could have been twins, hurried across the street while they each munched on greasy ‘extra-cheese’ slice of pizza. The boys bumped into each other playfully, causing one boy to almost drop his slice. The mother smacked a couple of the kids on the back of the head. “Cut it out!” she growled and they continued walking up the street while the tallest boy discreetly elbowed the smallest of the brothers.

When Susan finally arrived we still had plenty of time to kill before the Weegee Walk. We decided to step into a local bar where we threw back a couple shots of Rye Whiskey. The sun had set by the time we came out of the bar. The evening was so dark we could have believed that it was midnight, though it was still not quite 6:PM. The street lights glowed, each one encircled by a misty halo and there was now a damp autumn chill in the air. 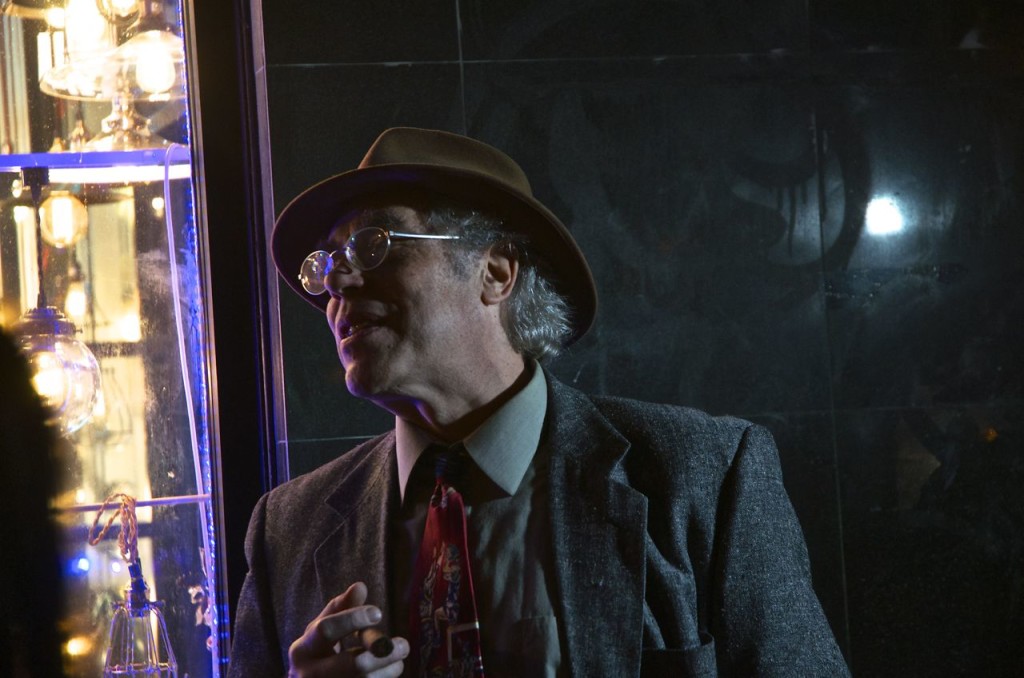 When we got to the narrow streets of China Town we sidled in with the rest of the participants of the Weegee Walk. David Rogers introduced himself as the leader and narrator of the evening’s event. He was an interesting looking character all decked out in his vintage 40’s fedora, a brightly colored antique tie, all the while carrying an unlit stogie to bump up the effect of an era gone by. He also carried a boom box that he turned on, playing Glen Miller music as we walked from one location to the other, enlivening the event that would be part lecture and part dramatic enactment. 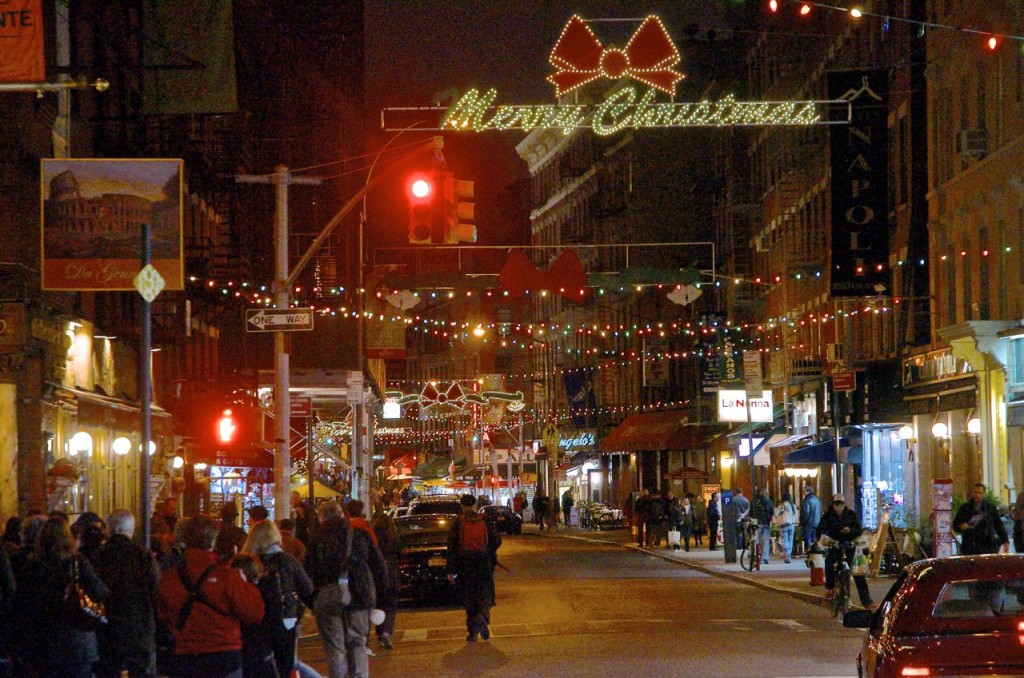 This part of the city was all decked out for the coming Holidays. The streets buzzed with activity. I would venture a guess that this area of NYC was just as busy in Weegee’s time. There were probably not as many tourists, though this part of town has always been known for it’s crowded streets. This was Weegee’s beat. Though he mostly worked the Lower East Side of Manhattan, he loved all of New York City. He loved the night, the streets; he was always on the watch for the unusual, the celebrity discovered in a compromising situation, a criminal apprehended, a body laying on the street, a life snuffed out by a knife or a gunshot. Weegee’s photographs are an extraordinary documentation of an era and a place.

Weegee was born Ascher Fellig in June 1899 in what is now Zolochiv, Ukraine. His family immigrated to the USA in 1909. His early work life consisted of numerous odd jobs including  itinerant photographer and assistant to a commercial photographer. In 1924 he worked as a dark-room technician. Then in 1935 he struck out on his own to become a freelance photographer. This is how Weegee described this new venture:

“I didn’t wait ’till somebody gave me a job or something, I went and created a job for myself–freelance photographer. And what I did, anybody else can do. What I did simply was this: I went down to Manhattan Police Headquarters and for two years I worked without a police card or any kind of credential. When a story came over a police teletype, I would go to it. The idea was I sold the pictures to the newspapers. And naturally, I picked a story that meant something.” 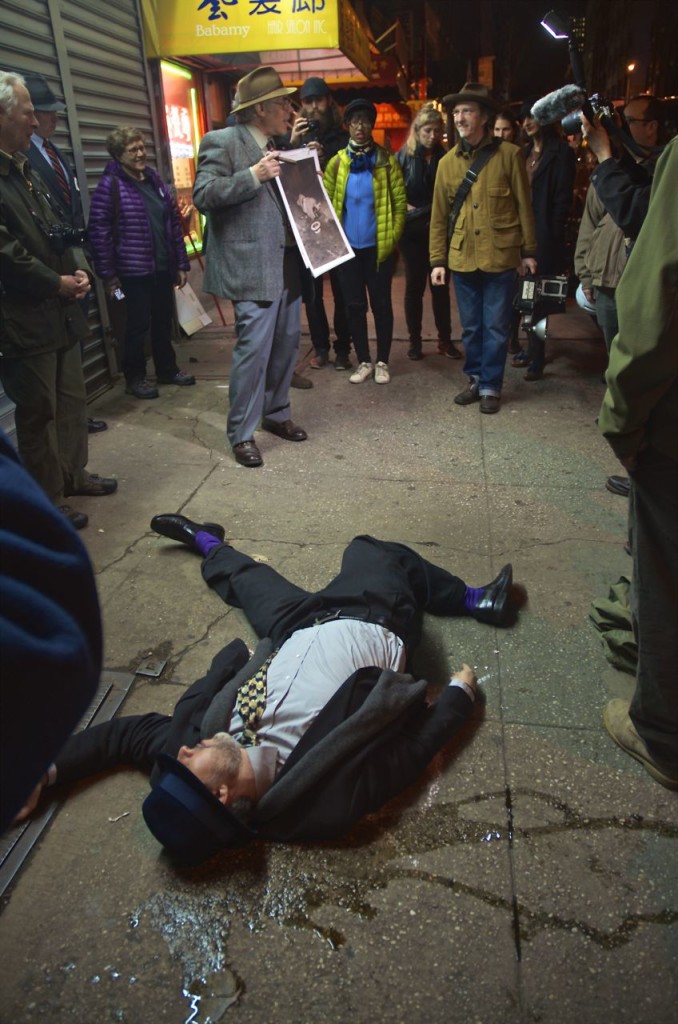 Prohibition ended in December 1933. The city was alive with energy and corruption was rampant. There was no end to the street crime, from the wise guys jockeying for territory, to the wrongful doing of the lowlifes scrapping for the leftovers. Weegee was good at finding these stories and hanging out in the police headquarters gave him perfect access to the crime scenes.

Our group tagged along behind David as he took us to 218-220 Grand Street where one of Weegee’s photographs immortalized a gunshot victim. A member of the ICP enactment group laid down on the sidewalk, in an exact replication of Weegee’s photo, while David explained that this victim had the misfortune of trying to muscle into the wrong guys territory.

Weegee said he could take his time with photos at a murder scene. “Now the easiest kind of jobs to cover is a murder, because the stiff will be laying on the ground, he couldn’t get up and walk away or get temperamental, and he could be good for at least two hours. So I had plenty of time.” 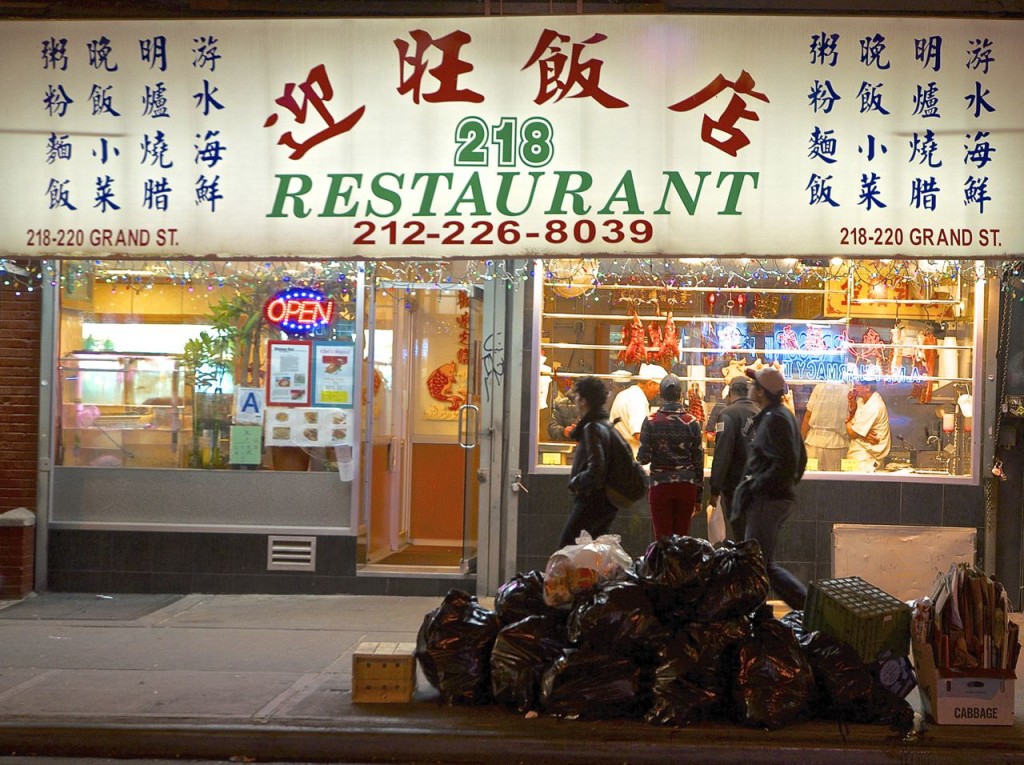 Directly across the street from this enactment of a murderous scene, shoppers and takeout joints conducted business as usual.

Weegee had no formal photography training. Throughout his career he covered some of the most grisly murders in NYC during the 1930’s and 1940’s. Eventually he secured his own portable police-band shortwave radio. Out of convenience, he constructed a complete darkroom in the trunk of his car. This allowed him to get his photos processed and delivered to the newspapers faster than his competitors. He also rented an apartment across the street from the Police Headquarters in Little Italy. This gave him twenty-four hour access to any criminal activity. When a police car took off, Weegee jumped into his vehicle and quickly took chase. Weegee said that, “news photography teaches you to think fast, to be sure of yourself, to have self confidence. When you get out on a story, you don’t go back for another sitting. You gotta get it.” 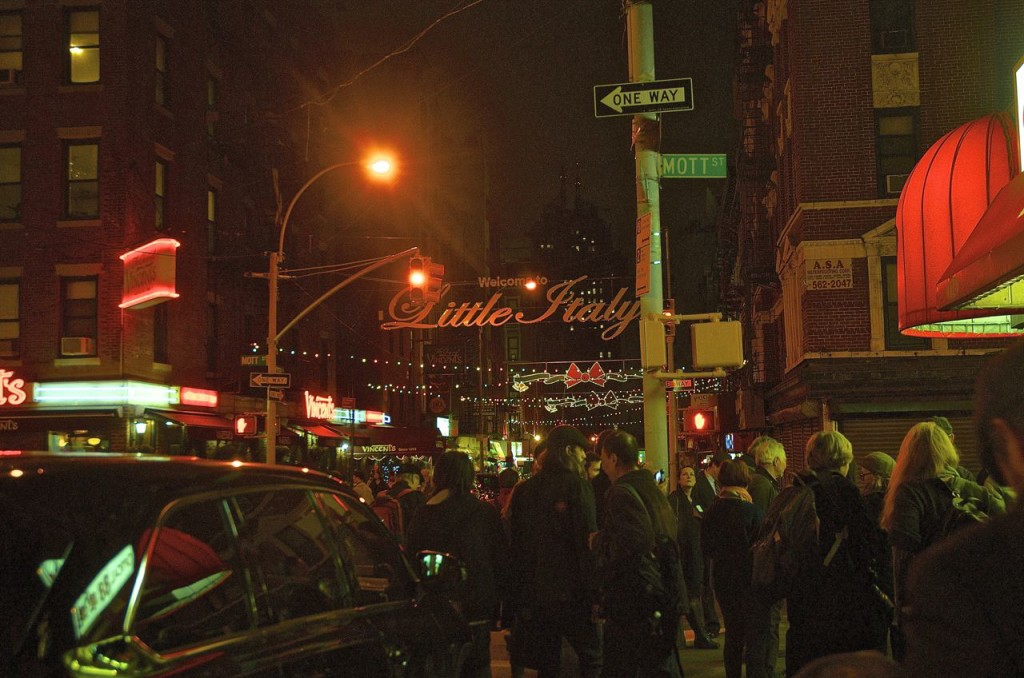 We headed up the street from China Town to Little Italy, stopping at Mott Street where many gangland murders had taken place. Weegee was a photographer who said he was always ready with his camera no matter what. He emphasized the importance of acting quickly. “There are decisive moments for a photographer and if you are not ready with the camera when that moment strikes, it is gone forever.” 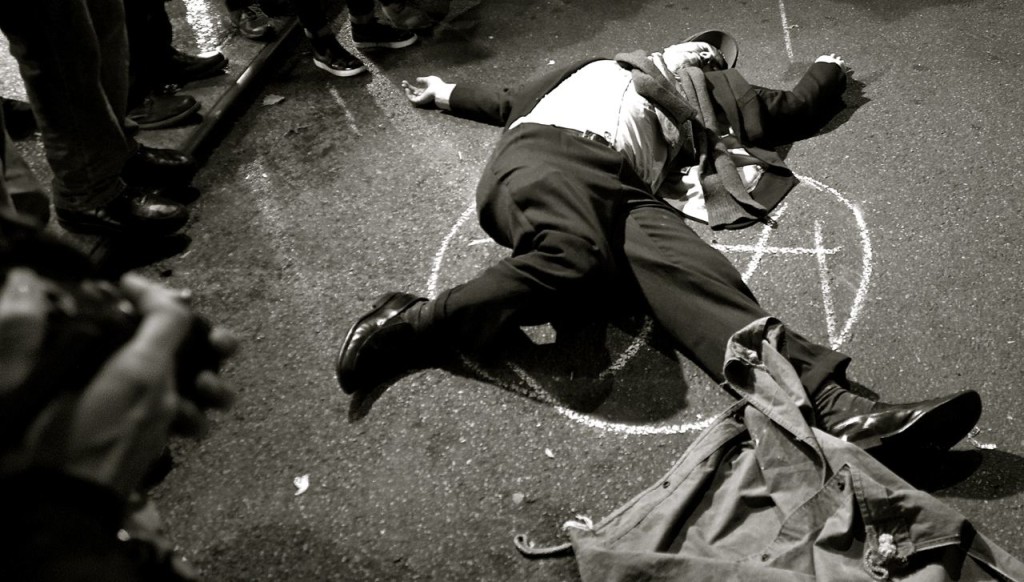 This unfortunate fellow was gunned down on the street before he could duck into his car. Weegee became a part of a group of people who made a living depicting this violence. But to that he said, “I cover all kinds of stories from Murder Incorporated to the opening of the opera to the Cinderella Ball at the Waldorf. In other words, you take everything in stride. The same camera that photographs a murder scene can photograph a beautiful society affair at a big hotel.” 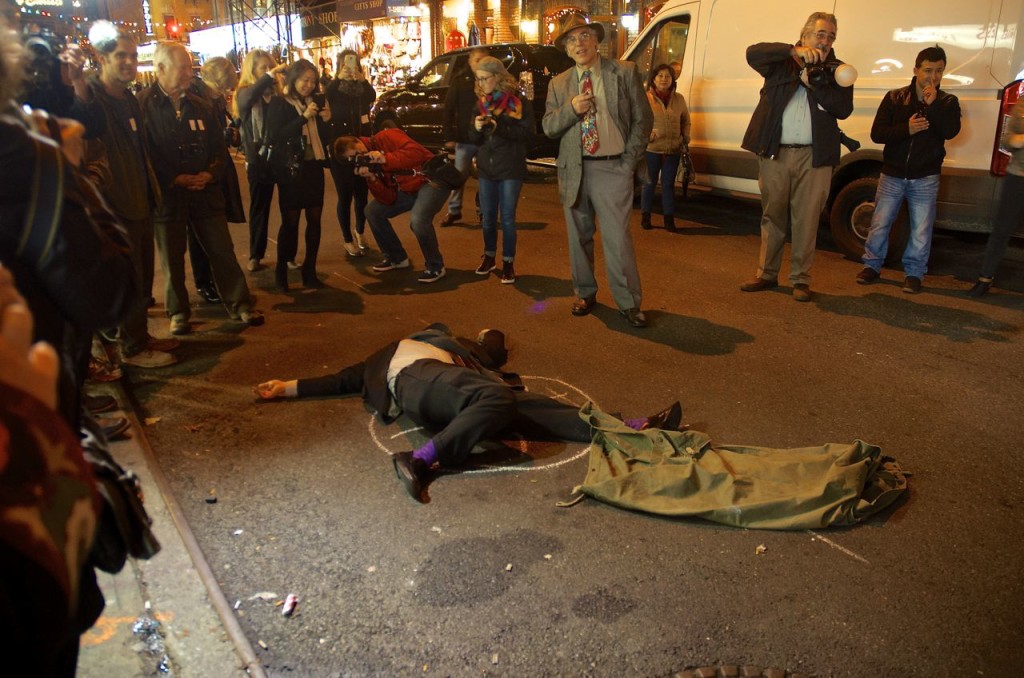 Our group certainly drew a curious crowd when David started a discussion with this make-believe dead guy in the middle of the street. A few cars passed. Some drivers at first went bug-eyed when they saw what they thought was a body lying on the street. Then as they drove away, they start chatting on their cell phones probably telling someone about the strange scene they just drove past. 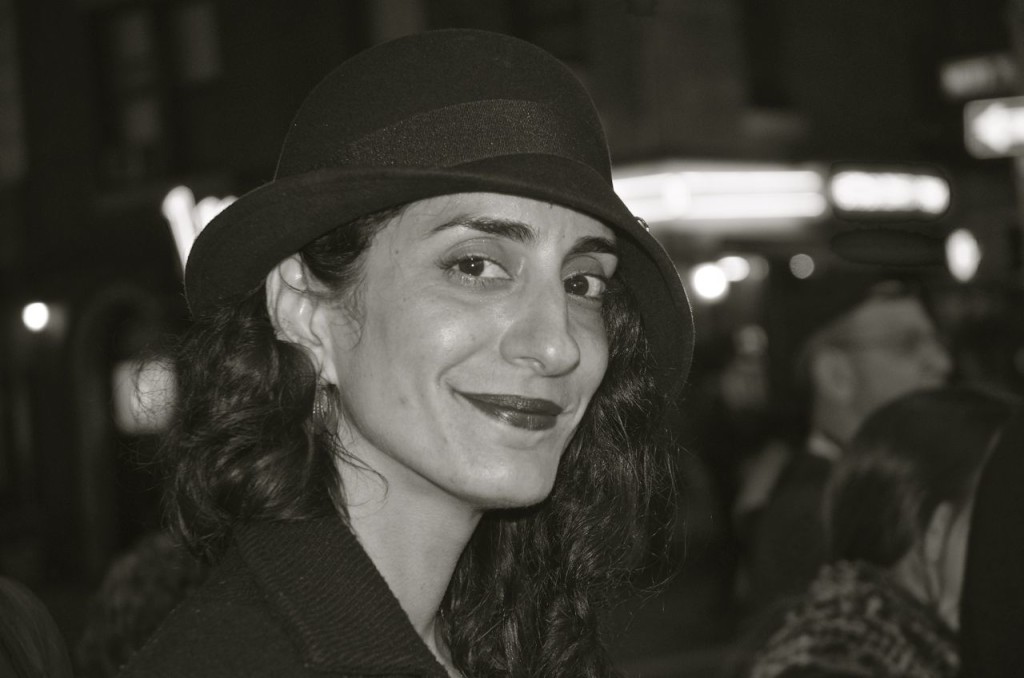 This femme fatale showed up at every enacted crime scene. She claimed that the murder victims were either a husband, a brother-in-law or her brother. 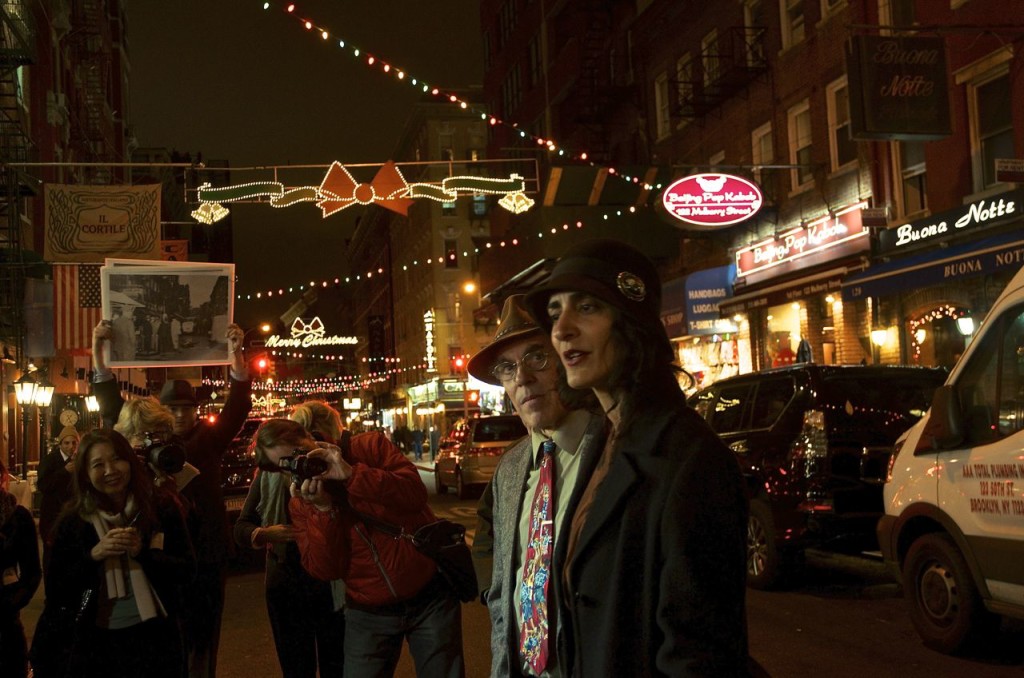 We stood on the streets of China Town and Little Italy listening to one excuse after another about why she was at the scene of each of these crimes, all the while she proclaimed her innocence. But where was the weapon? 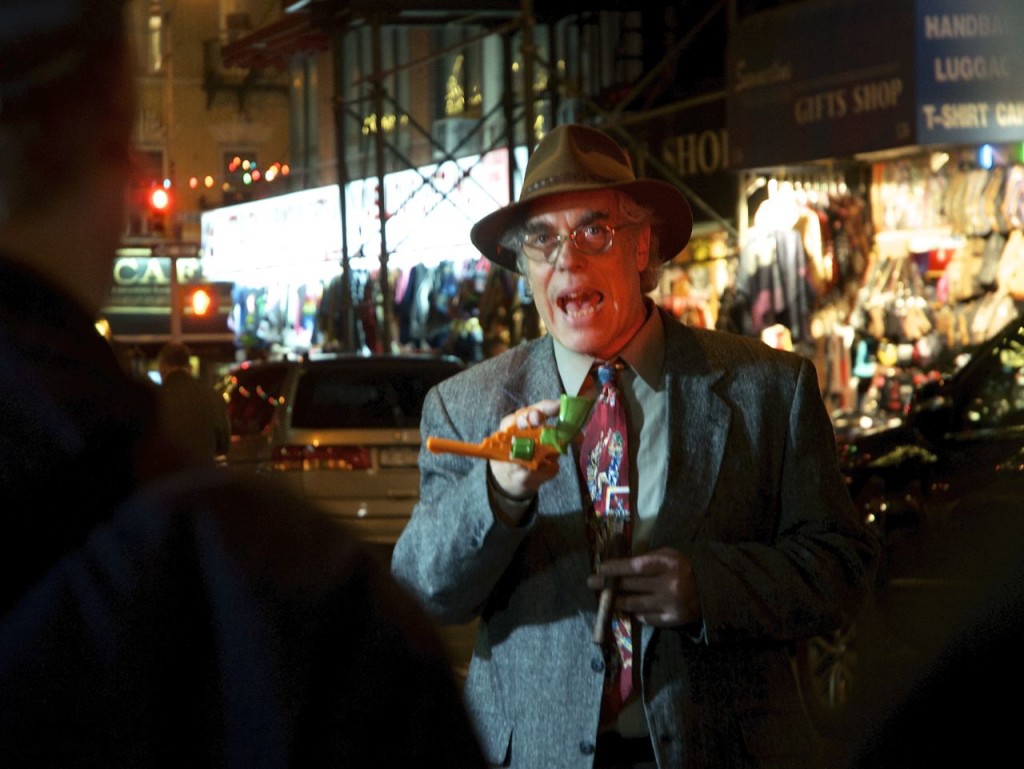 And then there is that, Ah-ha! moment. The murder weapon was found!! Did it fall from the suspicious woman’s handbag? The caliber was an easy match to the murders. It would be years though before forensics would be the science that it is today. Back then it would have been determined by less sophisticated means that this weapon could perhaps be the gun that was used to murder any of these men. 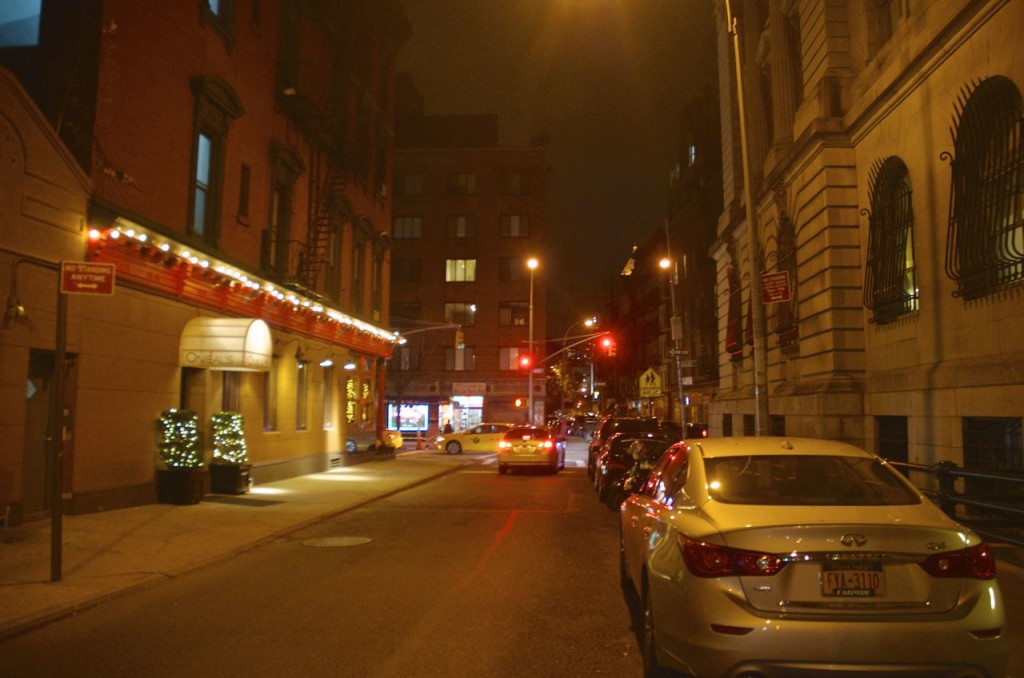 This is the street Weegee lived on. The police station, now converted into condos, is on the right and at the end of the block, across the street from the station, is Onieals, an upscale restaurant that has been at this location for many years. There used to be a tunnel that allowed the policemen in the station house to travel back and forth between the station and the restaurant without being detected. The owner of the restaurant said that some years ago the tunnel was bricked up. Once in a while he escorts curious patrons down to the cellar to show them where the tunnel used to be. 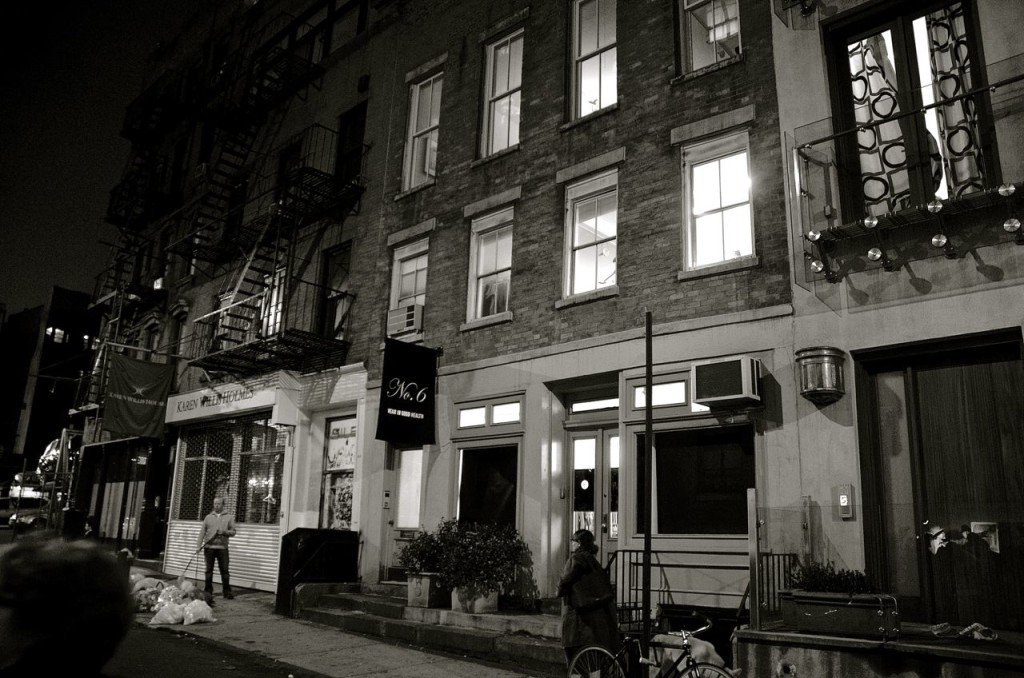 These are the buildings across the street from the one-time station house and where Weegee used to live. A few of the buildings are somewhat the same as they were back in Weegee’s time, though they’ve been cleaned up and are quite a bit more expensive than they were in Weegee’s days. 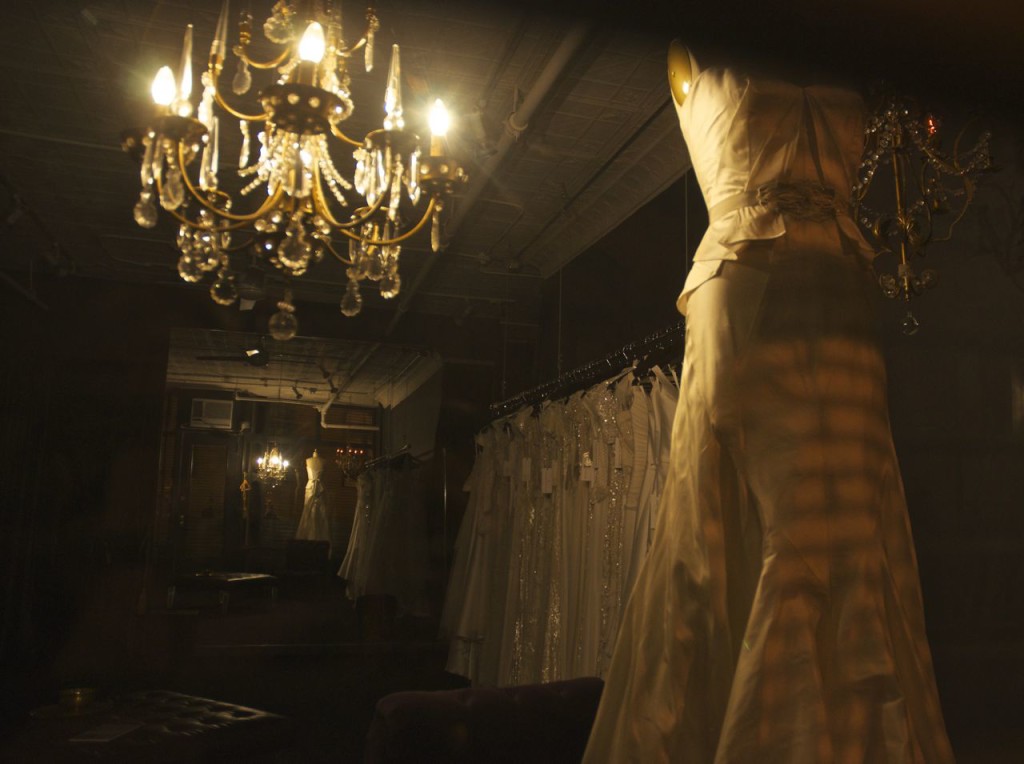 There is a very classy wedding dress shop just down the street from the apartment where Weegee used to watch the Police station house for activity. This is certainly no longer the gritty neighborhood Weegee used to live in. 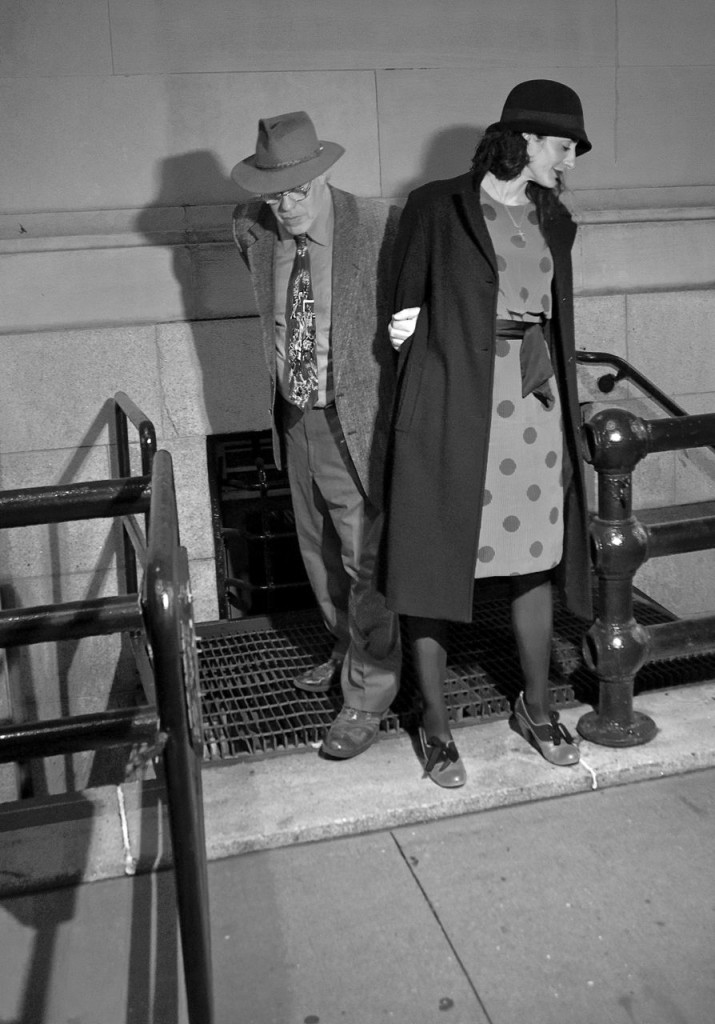 The final enactment for the evening was the scene Weegee immortalized of a woman who was about to stand trial for murder. It wasn’t clear to me if she had actually committed all of the murders we had seen enacted during the evening, or if she was only guilty of a few paltry murders or perhaps just one. But Weegee caught her with his camera as she was coming out of lockup and being escorted to the Court House. 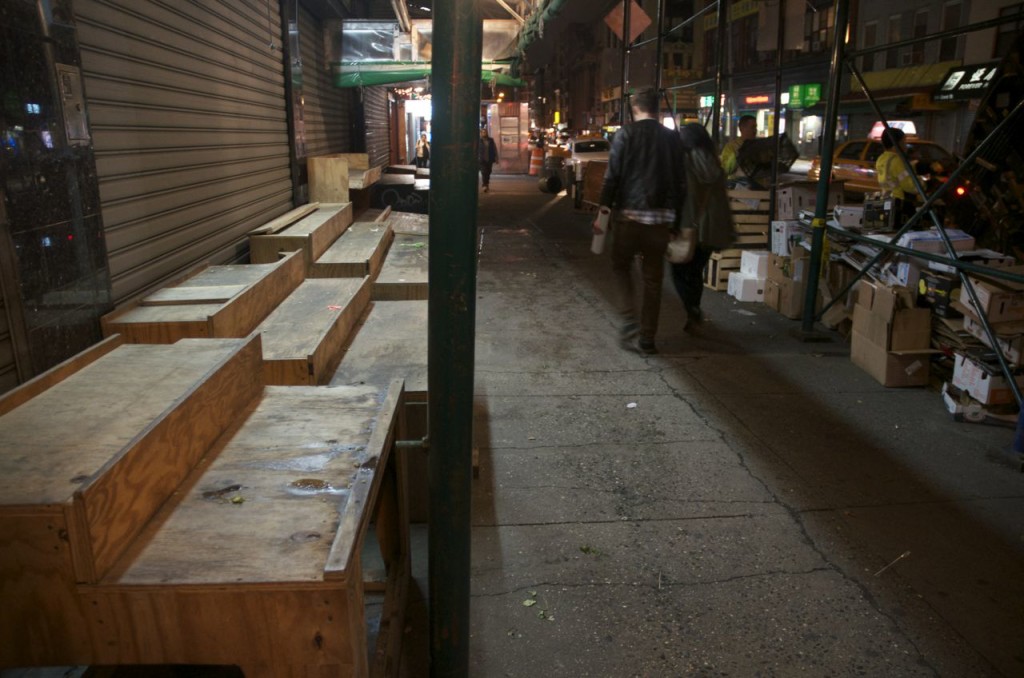 When the ICP evening was over Susan and I headed back to the subway. The bustling street traffic had slowed. The China Town produce stands and fish markets were closed. The garbage trucks were making their nightly pickups. 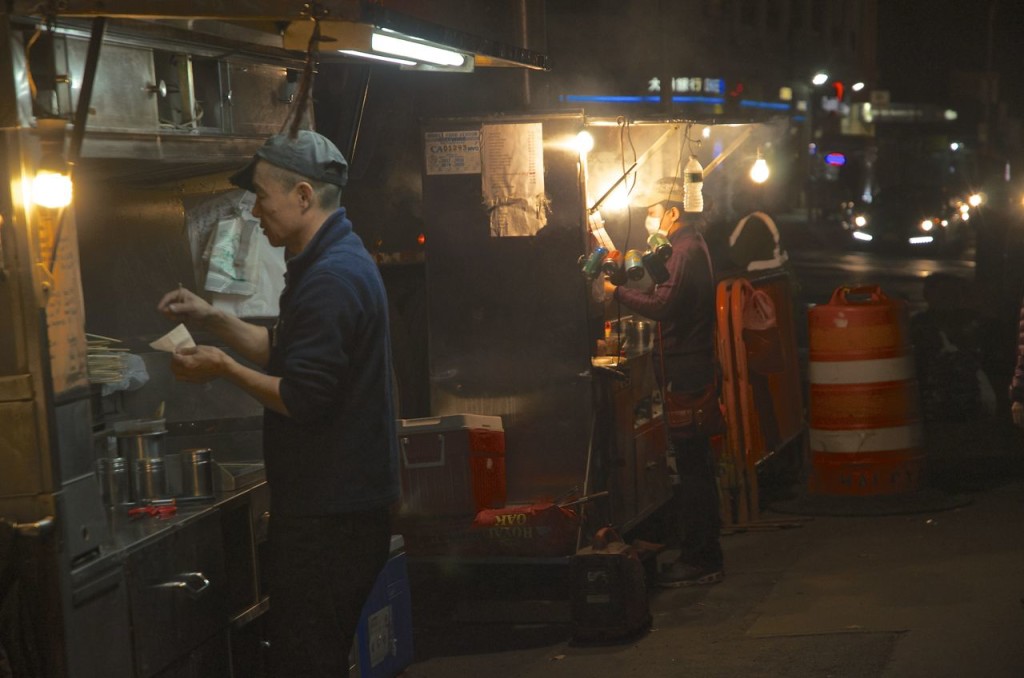 Vendors were hard at work preparing street food for the young people hanging around waiting for the clubs to open. The area is not the same as when Weegee worked these streets hunting for the photographs to give to newspaper editors. But I’m sure that if he were still around today he’d attribute his photography to knowing the streets as well as he did. “I know ’em all because I drive all night long. I know every block, every sign-post, every cop, every beggar, every…everything.” 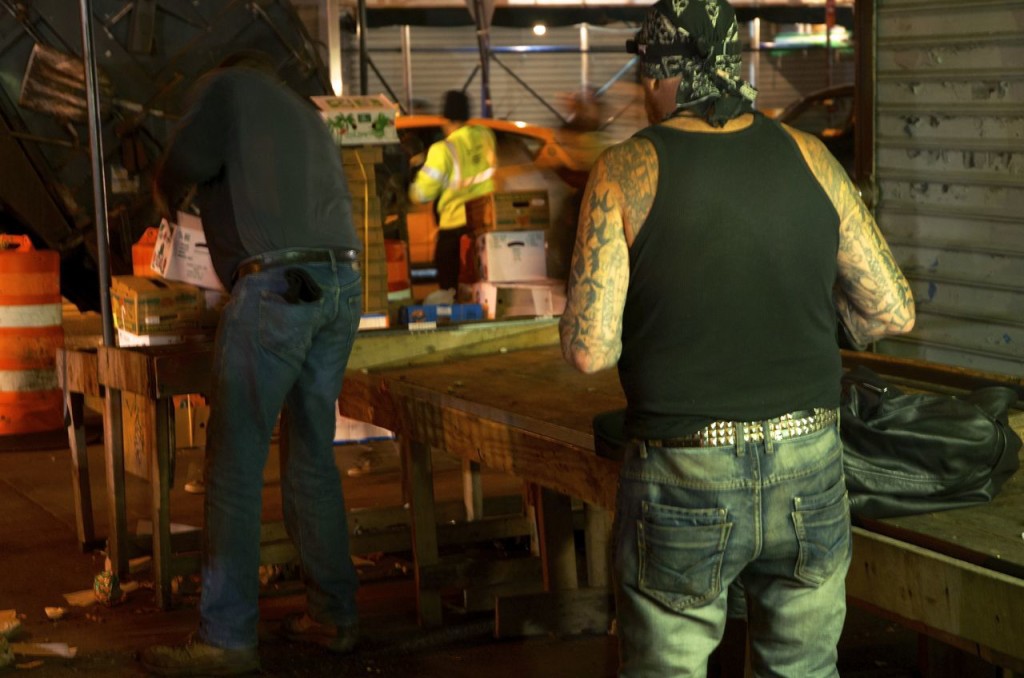 Weegee’s city comes alive at night with a curious energy. He slept in his car, ate in his car, always hunting for that perfect photograph. “I’m a perfectionist,” he’s often been quoted saying. “When I take a picture, if it’s a murder or it’s a drunk, it has got to be good.”

He lived and breathed photography and said he’d, “like to live regular. Go home to a good-looking wife, a hot dinner, and a husky kid. But I guess I got film in my blood. I live this racket. It’s exciting. It’s dangerous. It’s fun. It’s tough. It’s heartbreaking.”

10 comments for “WEEGEE; A BRIEF ANATOMY OF A CRIME PHOTOGRAPHER”